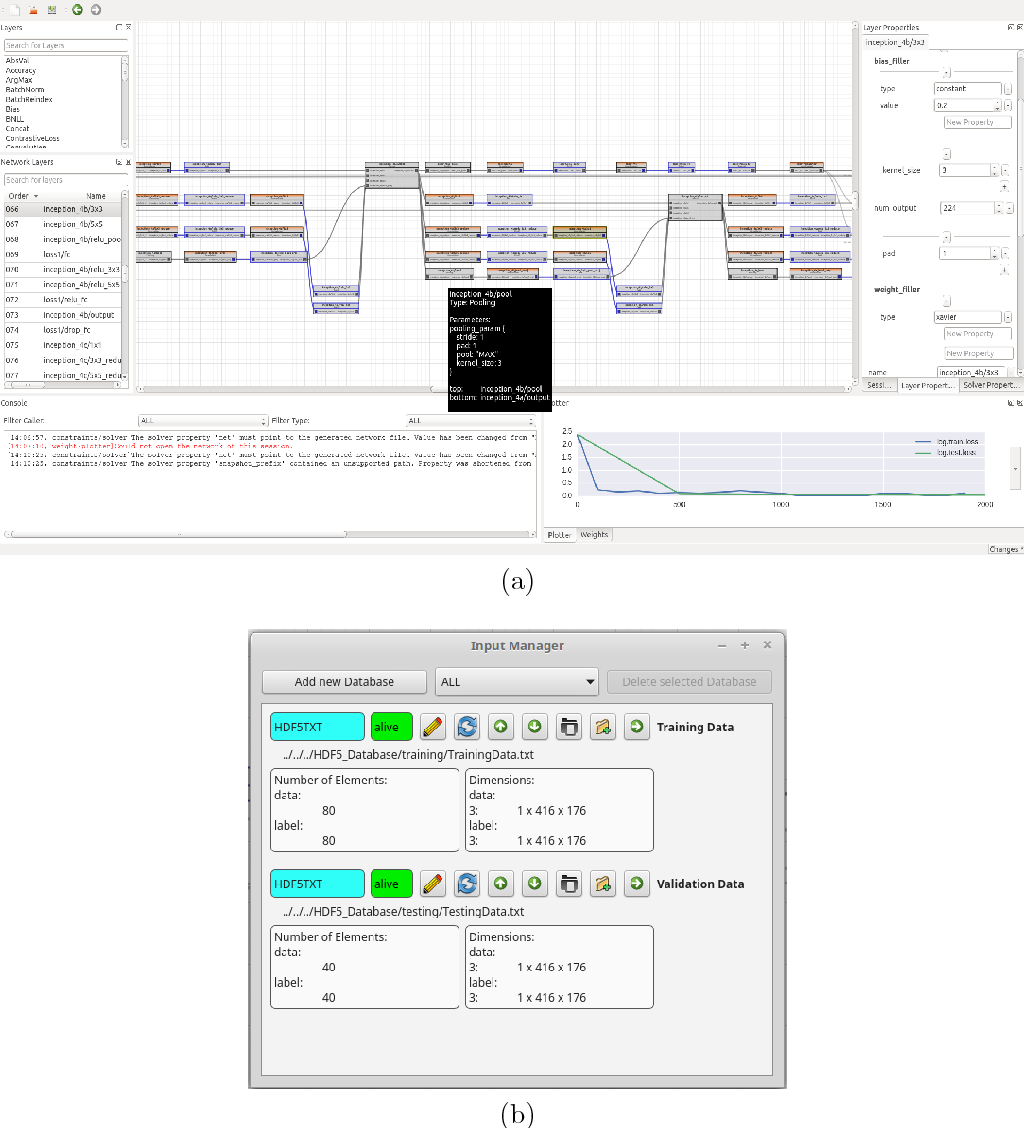 In recent years, the importance of deep learning has significantly increased in pattern recognition, computer vision, and artificial intelligence research, as well as in industry. However, despite the existence of multiple deep learning frameworks, there is a lack of comprehensible and easy-to-use high-level tools for the design, training, and testing of deep neural networks (DNNs). In this paper, we introduce Barista, an open-source graphical high-level interface for the Caffe deep learning framework. While Caffe is one of the most popular frameworks for training DNNs, editing prototext files in order to specify the net architecture and hyper parameters can become a cumbersome and error-prone task. Instead, Barista offers a fully graphical user interface with a graph-based net topology editor and provides an end-to-end training facility for DNNs, which allows researchers to focus on solving their problems without having to write code, edit text files, or manually parse logged data.

The Heart of an Image: Quantum Superposition and Entanglement in Visual Perception 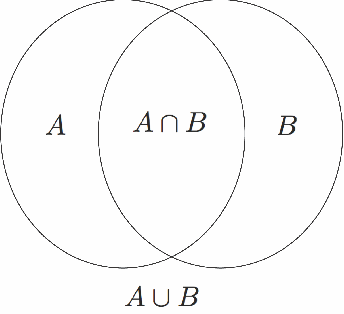 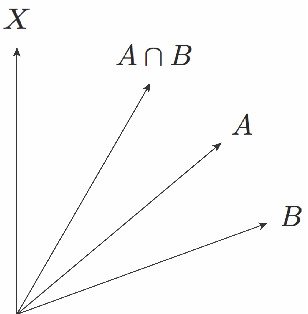 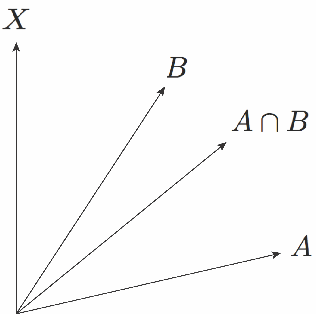 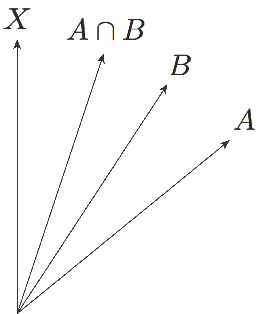 We analyse the way in which the principle that 'the whole is greater than the sum of its parts' manifests itself with phenomena of visual perception. For this investigation we use insights and techniques coming from quantum cognition, and more specifically we are inspired by the correspondence of this principle with the phenomenon of the conjunction effect in human cognition. We identify entities of meaning within artefacts of visual perception and rely on how such entities are modelled for corpuses of texts such as the webpages of the World-Wide Web for our study of how they appear in phenomena of visual perception. We identify concretely the conjunction effect in visual artefacts and analyse its structure in the example of a photograph. We also analyse quantum entanglement between different aspects of meaning in artefacts of visual perception. We confirm its presence by showing that well elected experiments on images retrieved accordingly by Google Images give rise to probabilities and expectation values violating the Clauser Horne Shimony Holt version of Bell's inequalities. We point out how this approach can lead to a mathematical description of the meaning content of a visual artefact such as a photograph. 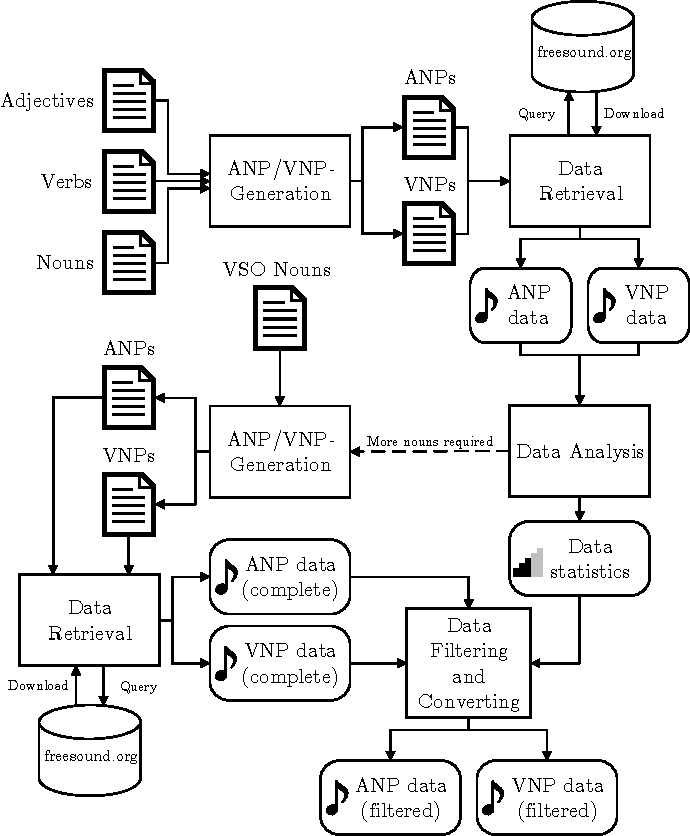 Recently, sound recognition has been used to identify sounds, such as car and river. However, sounds have nuances that may be better described by adjective-noun pairs such as slow car, and verb-noun pairs such as flying insects, which are under explored. Therefore, in this work we investigate the relation between audio content and both adjective-noun pairs and verb-noun pairs. Due to the lack of datasets with these kinds of annotations, we collected and processed the AudioPairBank corpus consisting of a combined total of 1,123 pairs and over 33,000 audio files. One contribution is the previously unavailable documentation of the challenges and implications of collecting audio recordings with these type of labels. A second contribution is to show the degree of correlation between the audio content and the labels through sound recognition experiments, which yielded results of 70% accuracy, hence also providing a performance benchmark. The results and study in this paper encourage further exploration of the nuances in audio and are meant to complement similar research performed on images and text in multimedia analysis.


* This paper is a revised version of "AudioSentibank: Large-scale Semantic Ontology of Acoustic Concepts for Audio Content Analysis"

Distributional semantics models derive word space from linguistic items in context. Meaning is obtained by defining a distance measure between vectors corresponding to lexical entities. Such vectors present several problems. In this paper we provide a guideline for post process improvements to the baseline vectors. We focus on refining the similarity aspect, address imperfections of the model by applying the hubness reduction method, implementing relational knowledge into the model, and providing a new ranking similarity definition that give maximum weight to the top 1 component value. This feature ranking is similar to the one used in information retrieval. All these enrichments outperform current literature results for joint ESL and TOEF sets comparison. Since single word embedding is a basic element of any semantic task one can expect a significant improvement of results for these tasks. Moreover, our improved method of text processing can be translated to continuous distributed representation of biological sequences for deep proteomics and genomics. 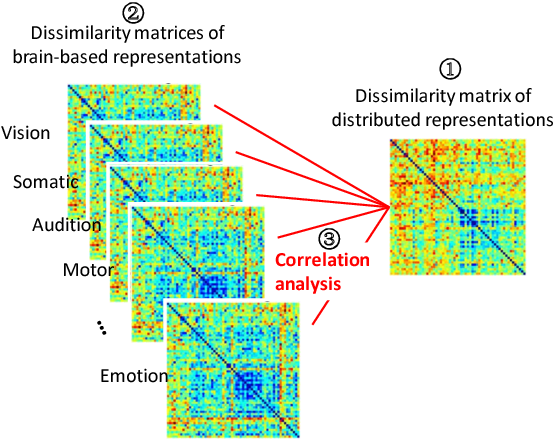 Context encoders as a simple but powerful extension of word2vec 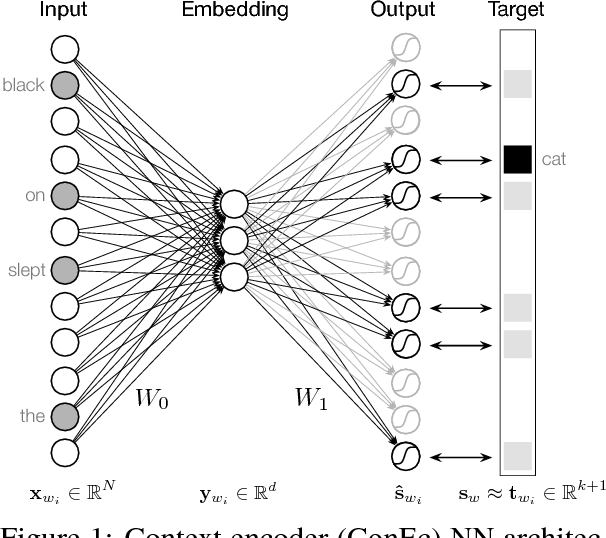 With a simple architecture and the ability to learn meaningful word embeddings efficiently from texts containing billions of words, word2vec remains one of the most popular neural language models used today. However, as only a single embedding is learned for every word in the vocabulary, the model fails to optimally represent words with multiple meanings. Additionally, it is not possible to create embeddings for new (out-of-vocabulary) words on the spot. Based on an intuitive interpretation of the continuous bag-of-words (CBOW) word2vec model's negative sampling training objective in terms of predicting context based similarities, we motivate an extension of the model we call context encoders (ConEc). By multiplying the matrix of trained word2vec embeddings with a word's average context vector, out-of-vocabulary (OOV) embeddings and representations for a word with multiple meanings can be created based on the word's local contexts. The benefits of this approach are illustrated by using these word embeddings as features in the CoNLL 2003 named entity recognition (NER) task. 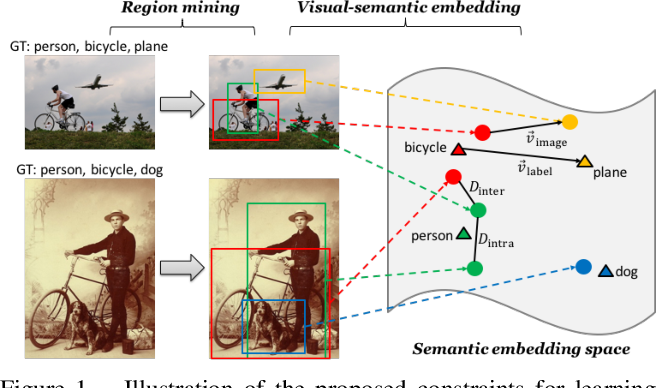 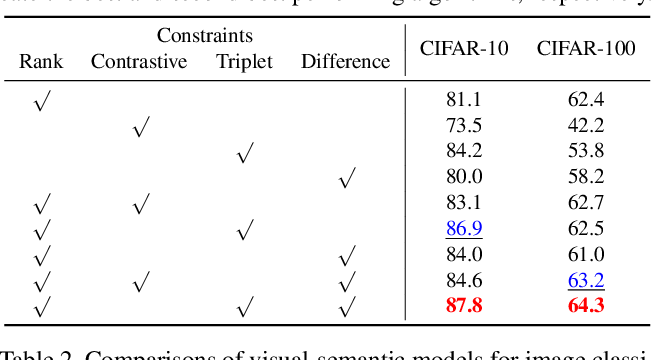 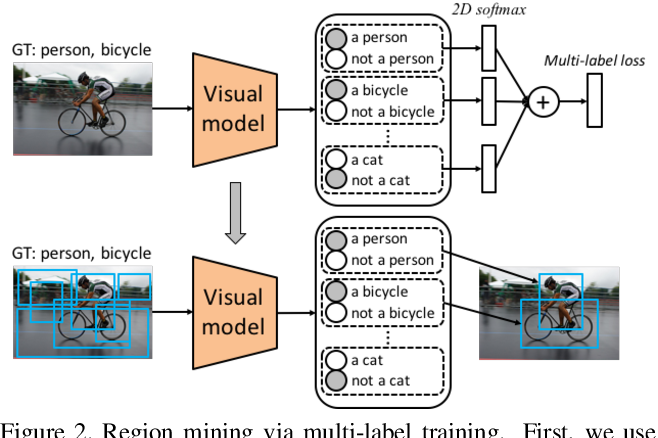 Numerous embedding models have been recently explored to incorporate semantic knowledge into visual recognition. Existing methods typically focus on minimizing the distance between the corresponding images and texts in the embedding space but do not explicitly optimize the underlying structure. Our key observation is that modeling the pairwise image-image relationship improves the discrimination ability of the embedding model. In this paper, we propose the structured discriminative and difference constraints to learn visual-semantic embeddings. First, we exploit the discriminative constraints to capture the intra- and inter-class relationships of image embeddings. The discriminative constraints encourage separability for image instances of different classes. Second, we align the difference vector between a pair of image embeddings with that of the corresponding word embeddings. The difference constraints help regularize image embeddings to preserve the semantic relationships among word embeddings. Extensive evaluations demonstrate the effectiveness of the proposed structured embeddings for single-label classification, multi-label classification, and zero-shot recognition. 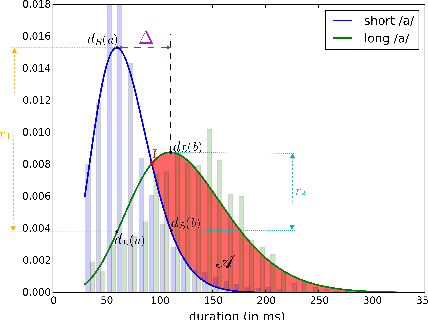 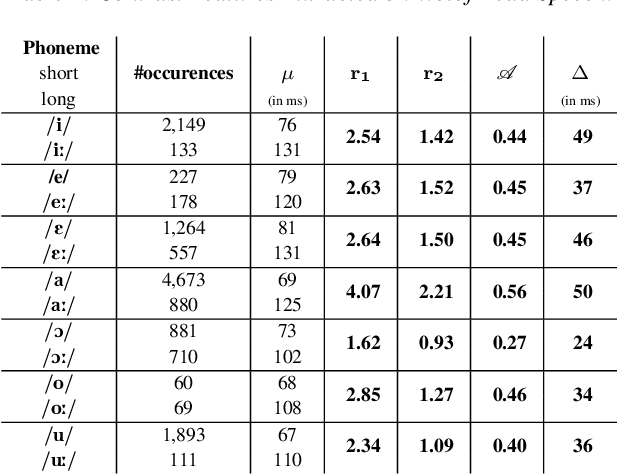 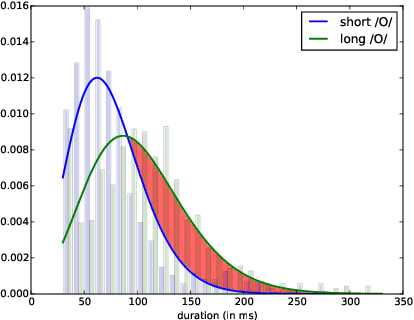 Growing digital archives and improving algorithms for automatic analysis of text and speech create new research opportunities for fundamental research in phonetics. Such empirical approaches allow statistical evaluation of a much larger set of hypothesis about phonetic variation and its conditioning factors (among them geographical / dialectal variants). This paper illustrates this vision and proposes to challenge automatic methods for the analysis of a not easily observable phenomenon: vowel length contrast. We focus on Wolof, an under-resourced language from Sub-Saharan Africa. In particular, we propose multiple features to make a fine evaluation of the degree of length contrast under different factors such as: read vs semi spontaneous speech ; standard vs dialectal Wolof. Our measures made fully automatically on more than 20k vowel tokens show that our proposed features can highlight different degrees of contrast for each vowel considered. We notably show that contrast is weaker in semi-spontaneous speech and in a non standard semi-spontaneous dialect. 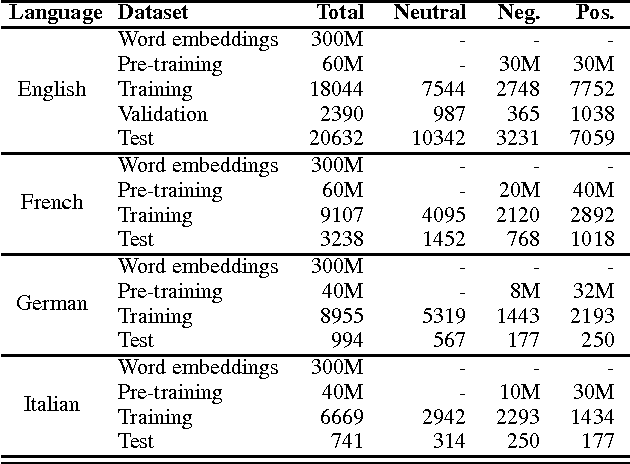 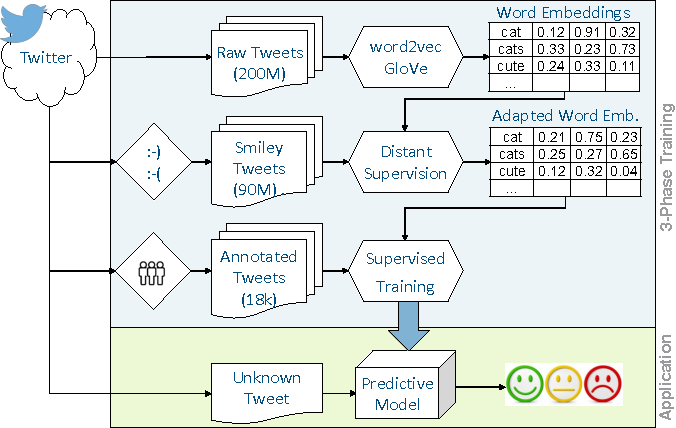 This paper presents a novel approach for multi-lingual sentiment classification in short texts. This is a challenging task as the amount of training data in languages other than English is very limited. Previously proposed multi-lingual approaches typically require to establish a correspondence to English for which powerful classifiers are already available. In contrast, our method does not require such supervision. We leverage large amounts of weakly-supervised data in various languages to train a multi-layer convolutional network and demonstrate the importance of using pre-training of such networks. We thoroughly evaluate our approach on various multi-lingual datasets, including the recent SemEval-2016 sentiment prediction benchmark (Task 4), where we achieved state-of-the-art performance. We also compare the performance of our model trained individually for each language to a variant trained for all languages at once. We show that the latter model reaches slightly worse - but still acceptable - performance when compared to the single language model, while benefiting from better generalization properties across languages.

Learning to detect and localize many objects from few examples 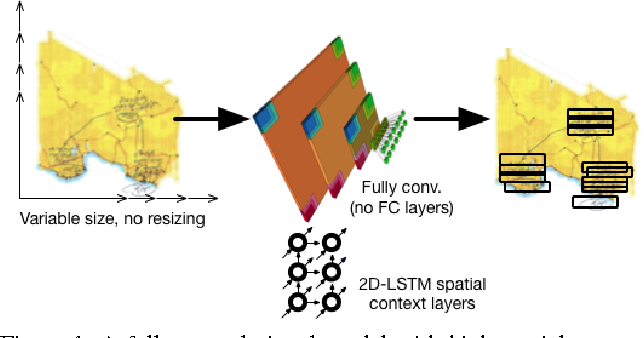 The current trend in object detection and localization is to learn predictions with high capacity deep neural networks trained on a very large amount of annotated data and using a high amount of processing power. In this work, we propose a new neural model which directly predicts bounding box coordinates. The particularity of our contribution lies in the local computations of predictions with a new form of local parameter sharing which keeps the overall amount of trainable parameters low. Key components of the model are spatial 2D-LSTM recurrent layers which convey contextual information between the regions of the image. We show that this model is more powerful than the state of the art in applications where training data is not as abundant as in the classical configuration of natural images and Imagenet/Pascal VOC tasks. We particularly target the detection of text in document images, but our method is not limited to this setting. The proposed model also facilitates the detection of many objects in a single image and can deal with inputs of variable sizes without resizing.