Social messages classification is a research domain that has attracted the attention of many researchers in these last years. Indeed, the social message is different from ordinary text because it has some special characteristics like its shortness. Then the development of new approaches for the processing of the social message is now essential to make its classification more efficient. In this paper, we are mainly interested in the classification of social messages based on their spreading on online social networks (OSN). We proposed a new distance metric based on the Dynamic Time Warping distance and we use it with the probabilistic and the evidential k Nearest Neighbors (k-NN) classifiers to classify propagation networks (PrNets) of messages. The propagation network is a directed acyclic graph (DAG) that is used to record propagation traces of the message, the traversed links and their types. We tested the proposed metric with the chosen k-NN classifiers on real world propagation traces that were collected from Twitter social network and we got good classification accuracies.


* 10 pages, 1 figure ECSQARU 2015, Proceedings of the 13th European Conferences on Symbolic and Quantitative Approaches to Reasoning with Uncertainty, 2015

Online harassment has been a problem to a greater or lesser extent since the early days of the internet. Previous work has applied anti-spam techniques like machine-learning based text classification (Reynolds, 2011) to detecting harassing messages. However, existing public datasets are limited in size, with labels of varying quality. The #HackHarassment initiative (an alliance of 1 tech companies and NGOs devoted to fighting bullying on the internet) has begun to address this issue by creating a new dataset superior to its predecssors in terms of both size and quality. As we (#HackHarassment) complete further rounds of labelling, later iterations of this dataset will increase the available samples by at least an order of magnitude, enabling corresponding improvements in the quality of machine learning models for harassment detection. In this paper, we introduce the first models built on the #HackHarassment dataset v1.0 (a new open dataset, which we are delighted to share with any interested researcherss) as a benchmark for future research. 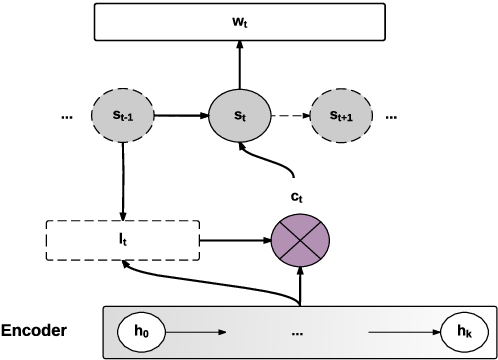 The problem of rare and unknown words is an important issue that can potentially influence the performance of many NLP systems, including both the traditional count-based and the deep learning models. We propose a novel way to deal with the rare and unseen words for the neural network models using attention. Our model uses two softmax layers in order to predict the next word in conditional language models: one predicts the location of a word in the source sentence, and the other predicts a word in the shortlist vocabulary. At each time-step, the decision of which softmax layer to use choose adaptively made by an MLP which is conditioned on the context.~We motivate our work from a psychological evidence that humans naturally have a tendency to point towards objects in the context or the environment when the name of an object is not known.~We observe improvements on two tasks, neural machine translation on the Europarl English to French parallel corpora and text summarization on the Gigaword dataset using our proposed model.

This before That: Causal Precedence in the Biomedical Domain 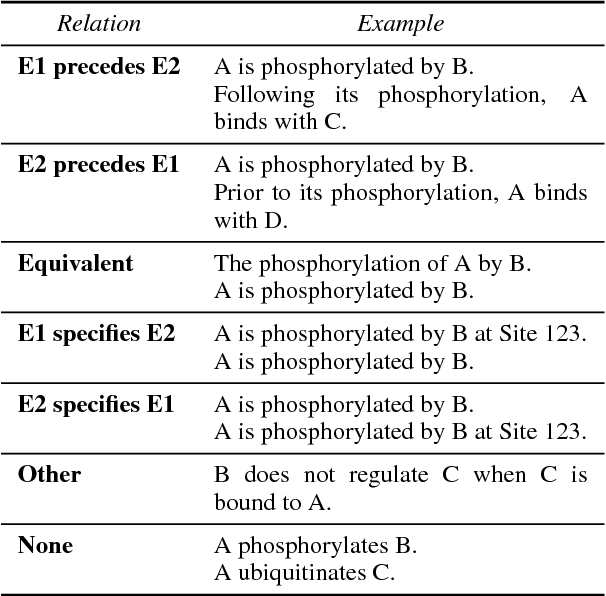 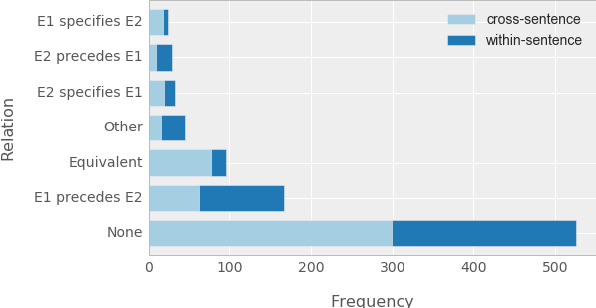 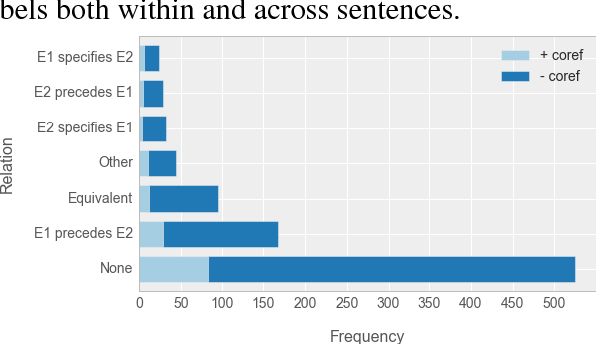 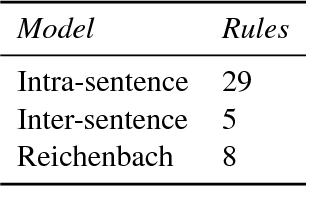 Causal precedence between biochemical interactions is crucial in the biomedical domain, because it transforms collections of individual interactions, e.g., bindings and phosphorylations, into the causal mechanisms needed to inform meaningful search and inference. Here, we analyze causal precedence in the biomedical domain as distinct from open-domain, temporal precedence. First, we describe a novel, hand-annotated text corpus of causal precedence in the biomedical domain. Second, we use this corpus to investigate a battery of models of precedence, covering rule-based, feature-based, and latent representation models. The highest-performing individual model achieved a micro F1 of 43 points, approaching the best performers on the simpler temporal-only precedence tasks. Feature-based and latent representation models each outperform the rule-based models, but their performance is complementary to one another. We apply a sieve-based architecture to capitalize on this lack of overlap, achieving a micro F1 score of 46 points. 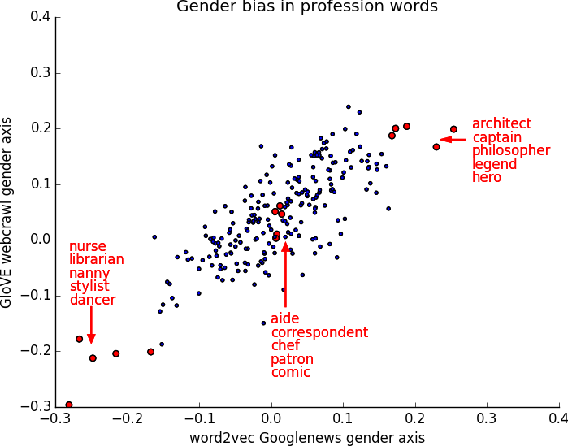 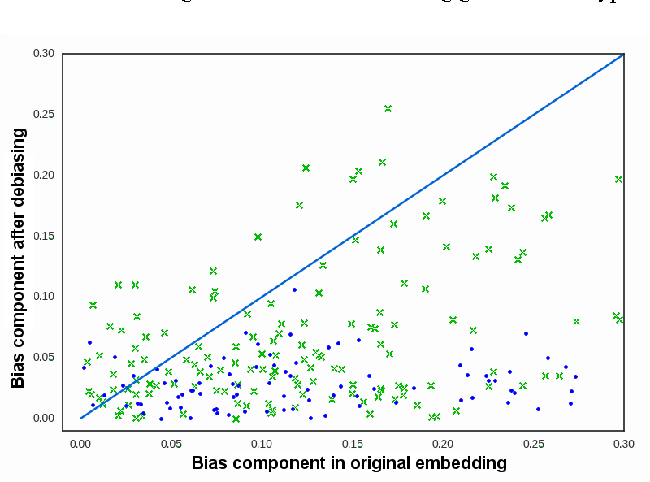 Machine learning algorithms are optimized to model statistical properties of the training data. If the input data reflects stereotypes and biases of the broader society, then the output of the learning algorithm also captures these stereotypes. In this paper, we initiate the study of gender stereotypes in {\em word embedding}, a popular framework to represent text data. As their use becomes increasingly common, applications can inadvertently amplify unwanted stereotypes. We show across multiple datasets that the embeddings contain significant gender stereotypes, especially with regard to professions. We created a novel gender analogy task and combined it with crowdsourcing to systematically quantify the gender bias in a given embedding. We developed an efficient algorithm that reduces gender stereotype using just a handful of training examples while preserving the useful geometric properties of the embedding. We evaluated our algorithm on several metrics. While we focus on male/female stereotypes, our framework may be applicable to other types of embedding biases. 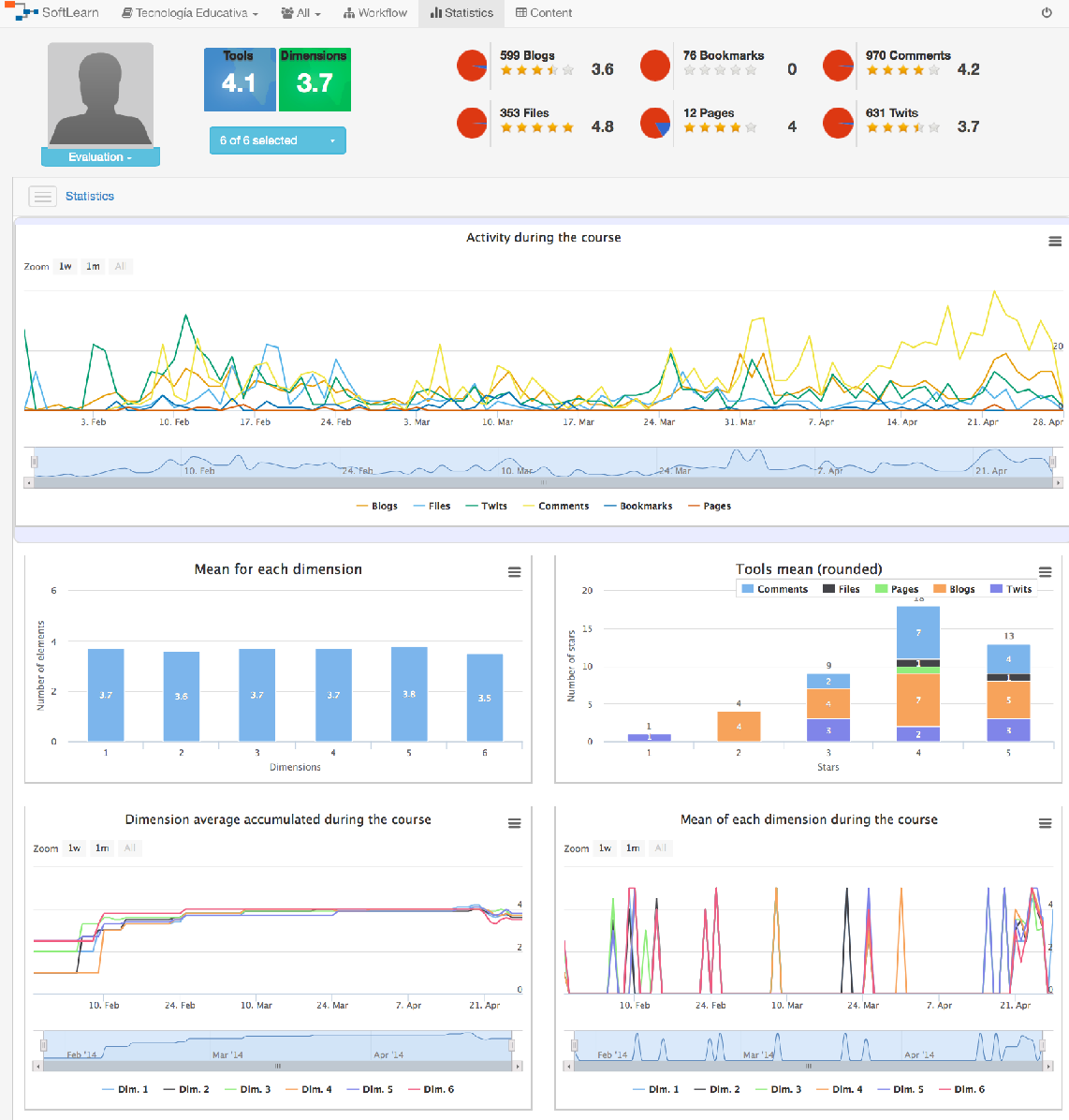 We explore the implications of using fuzzy techniques (mainly those commonly used in the linguistic description/summarization of data discipline) from a natural language generation perspective. For this, we provide an extensive discussion of some general convergence points and an exploration of the relationship between the different tasks involved in the standard NLG system pipeline architecture and the most common fuzzy approaches used in linguistic summarization/description of data, such as fuzzy quantified statements, evaluation criteria or aggregation operators. Each individual discussion is illustrated with a related use case. Recent work made in the context of cross-fertilization of both research fields is also referenced. This paper encompasses general ideas that emerged as part of the PhD thesis "Application of fuzzy sets in data-to-text systems". It does not present a specific application or a formal approach, but rather discusses current high-level issues and potential usages of fuzzy sets (focused on linguistic summarization of data) in natural language generation.

Topic models are popular for modeling discrete data (e.g., texts, images, videos, links), and provide an efficient way to discover hidden structures/semantics in massive data. One of the core problems in this field is the posterior inference for individual data instances. This problem is particularly important in streaming environments, but is often intractable. In this paper, we investigate the use of the Frank-Wolfe algorithm (FW) for recovering sparse solutions to posterior inference. From detailed elucidation of both theoretical and practical aspects, FW exhibits many interesting properties which are beneficial to topic modeling. We then employ FW to design fast methods, including ML-FW, for learning latent Dirichlet allocation (LDA) at large scales. Extensive experiments show that to reach the same predictiveness level, ML-FW can perform tens to thousand times faster than existing state-of-the-art methods for learning LDA from massive/streaming data. 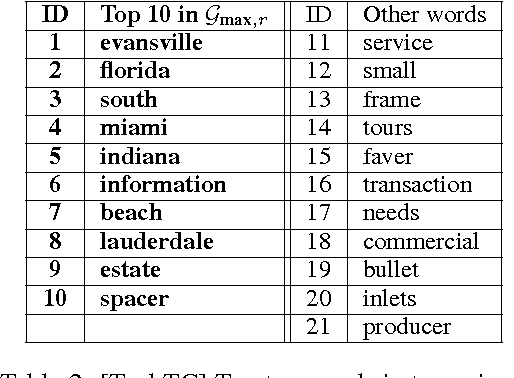 We study how well one can recover sparse principal components of a data matrix using a sketch formed from a few of its elements. We show that for a wide class of optimization problems, if the sketch is close (in the spectral norm) to the original data matrix, then one can recover a near optimal solution to the optimization problem by using the sketch. In particular, we use this approach to obtain sparse principal components and show that for \math{m} data points in \math{n} dimensions, \math{O(\epsilon^{-2}\tilde k\max\{m,n\})} elements gives an \math{\epsilon}-additive approximation to the sparse PCA problem (\math{\tilde k} is the stable rank of the data matrix). We demonstrate our algorithms extensively on image, text, biological and financial data. The results show that not only are we able to recover the sparse PCAs from the incomplete data, but by using our sparse sketch, the running time drops by a factor of five or more. 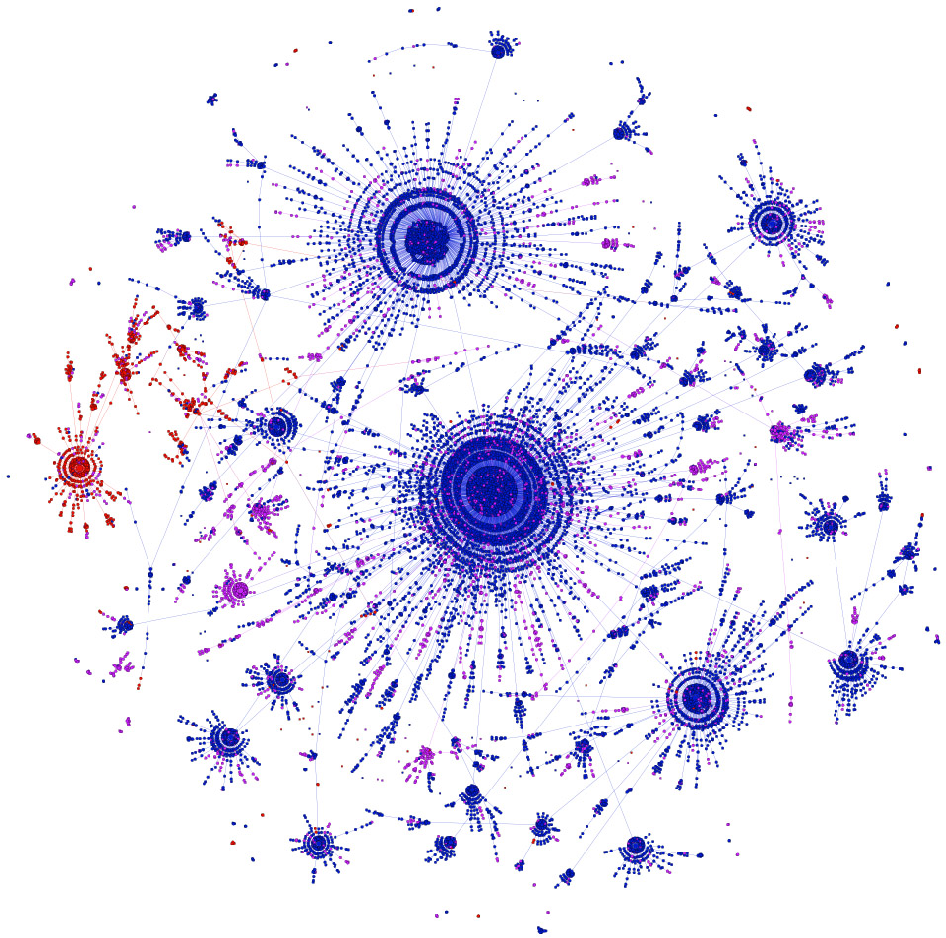 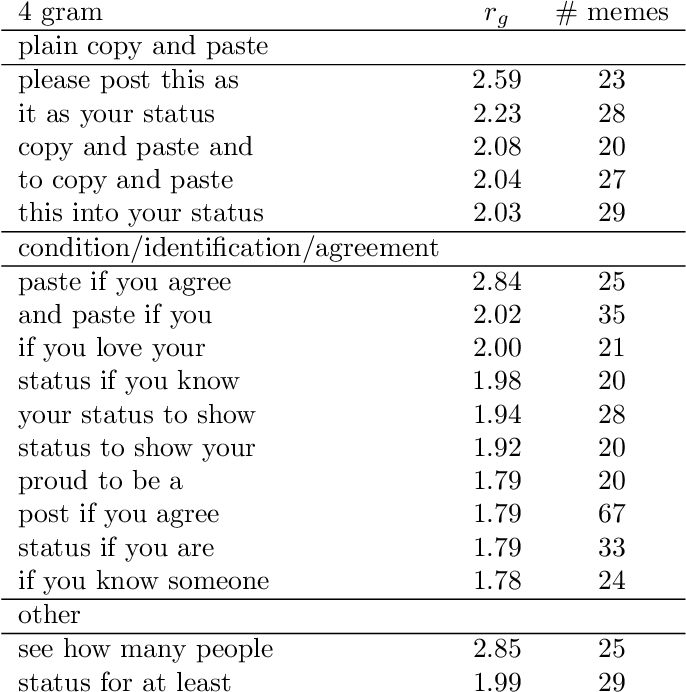 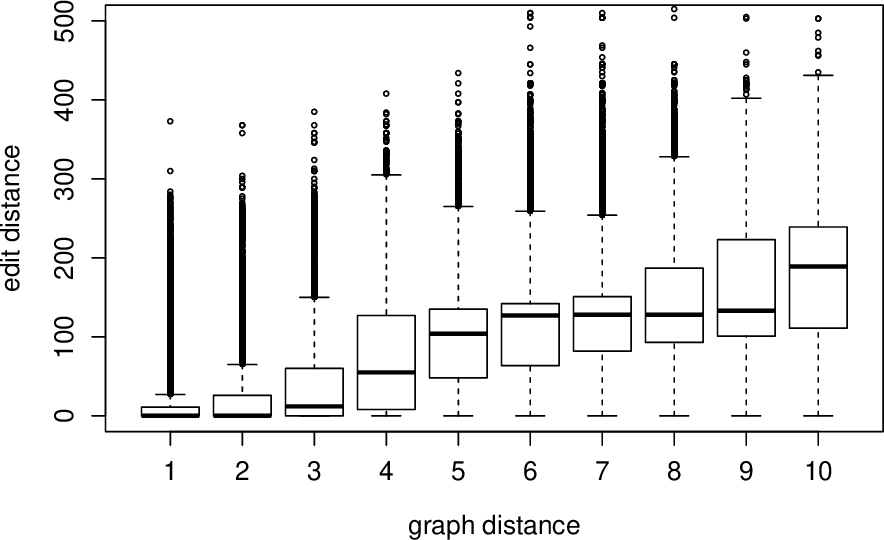 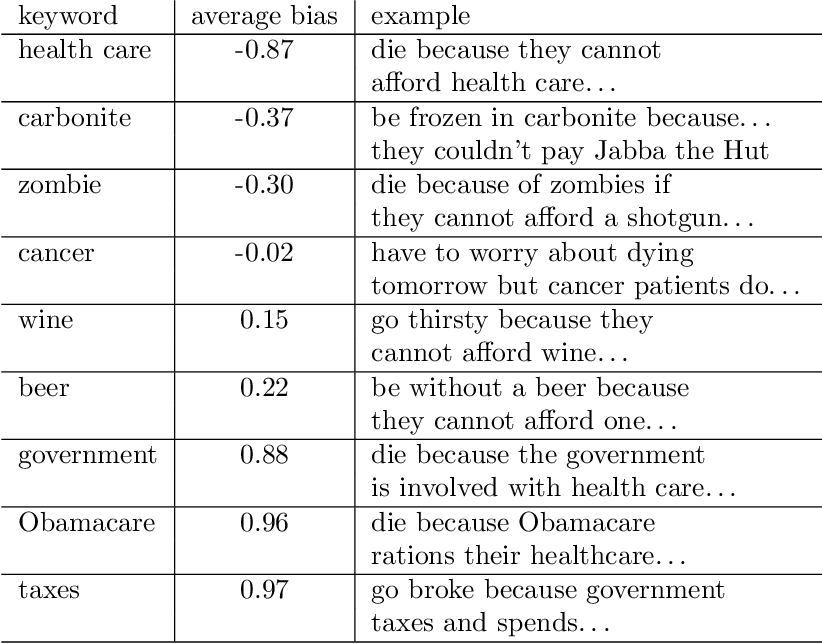 Social networks readily transmit information, albeit with less than perfect fidelity. We present a large-scale measurement of this imperfect information copying mechanism by examining the dissemination and evolution of thousands of memes, collectively replicated hundreds of millions of times in the online social network Facebook. The information undergoes an evolutionary process that exhibits several regularities. A meme's mutation rate characterizes the population distribution of its variants, in accordance with the Yule process. Variants further apart in the diffusion cascade have greater edit distance, as would be expected in an iterative, imperfect replication process. Some text sequences can confer a replicative advantage; these sequences are abundant and transfer "laterally" between different memes. Subpopulations of the social network can preferentially transmit a specific variant of a meme if the variant matches their beliefs or culture. Understanding the mechanism driving change in diffusing information has important implications for how we interpret and harness the information that reaches us through our social networks.

Non-negative matrix factorization (NMF) has become a popular machine learning approach to many problems in text mining, speech and image processing, bio-informatics and seismic data analysis to name a few. In NMF, a matrix of non-negative data is approximated by the low-rank product of two matrices with non-negative entries. In this paper, the approximation quality is measured by the Kullback-Leibler divergence between the data and its low-rank reconstruction. The existence of the simple multiplicative update (MU) algorithm for computing the matrix factors has contributed to the success of NMF. Despite the availability of algorithms showing faster convergence, MU remains popular due to its simplicity. In this paper, a diagonalized Newton algorithm (DNA) is proposed showing faster convergence while the implementation remains simple and suitable for high-rank problems. The DNA algorithm is applied to various publicly available data sets, showing a substantial speed-up on modern hardware.