Learning to Describe Differences Between Pairs of Similar Images 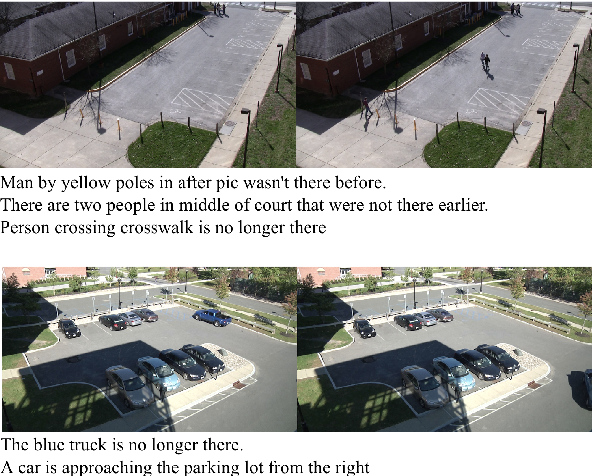 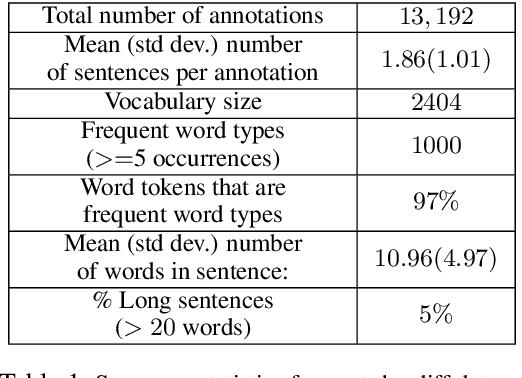 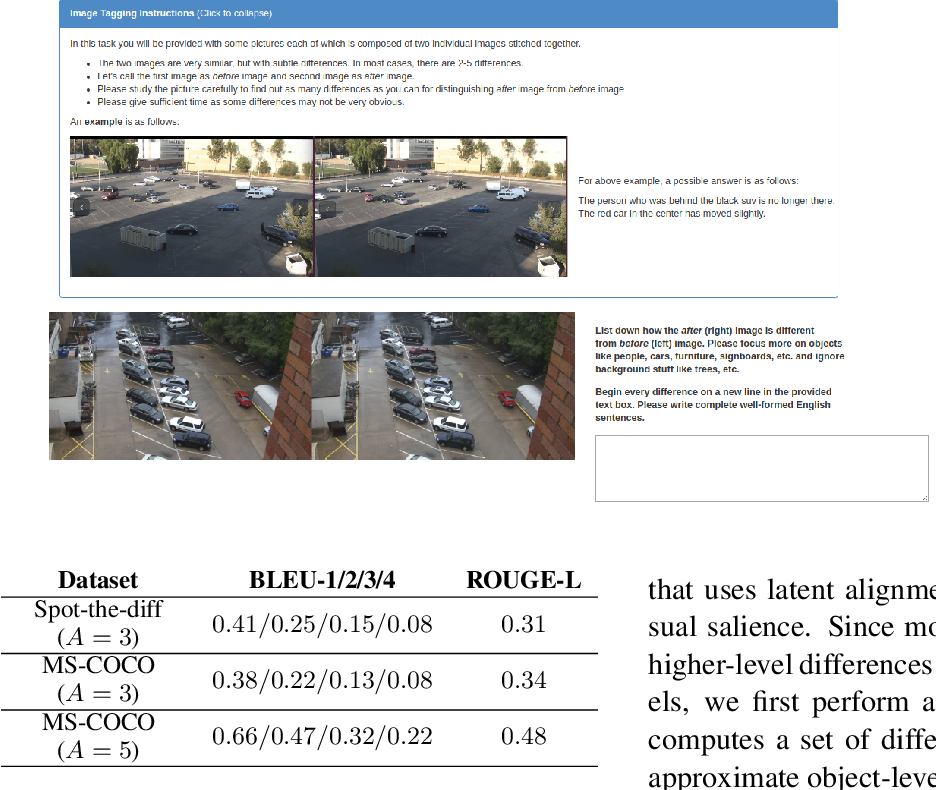 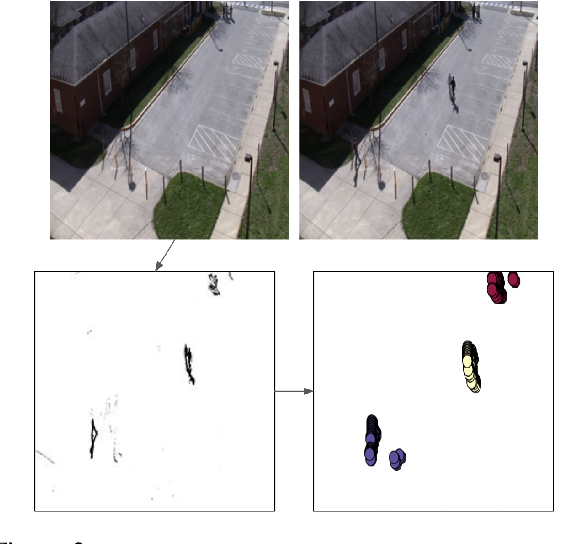 In this paper, we introduce the task of automatically generating text to describe the differences between two similar images. We collect a new dataset by crowd-sourcing difference descriptions for pairs of image frames extracted from video-surveillance footage. Annotators were asked to succinctly describe all the differences in a short paragraph. As a result, our novel dataset provides an opportunity to explore models that align language and vision, and capture visual salience. The dataset may also be a useful benchmark for coherent multi-sentence generation. We perform a firstpass visual analysis that exposes clusters of differing pixels as a proxy for object-level differences. We propose a model that captures visual salience by using a latent variable to align clusters of differing pixels with output sentences. We find that, for both single-sentence generation and as well as multi-sentence generation, the proposed model outperforms the models that use attention alone. 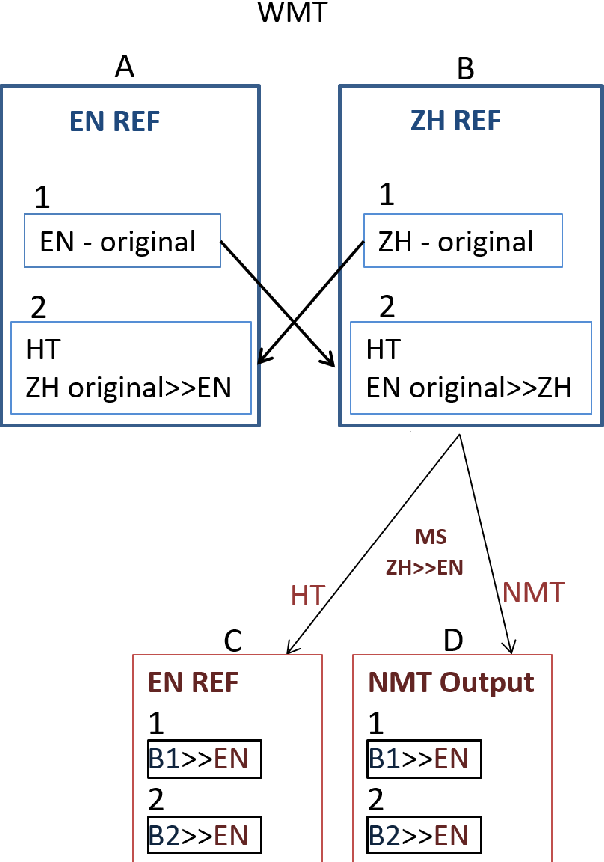 We reassess a recent study (Hassan et al., 2018) that claimed that machine translation (MT) has reached human parity for the translation of news from Chinese into English, using pairwise ranking and considering three variables that were not taken into account in that previous study: the language in which the source side of the test set was originally written, the translation proficiency of the evaluators, and the provision of inter-sentential context. If we consider only original source text (i.e. not translated from another language, or translationese), then we find evidence showing that human parity has not been achieved. We compare the judgments of professional translators against those of non-experts and discover that those of the experts result in higher inter-annotator agreement and better discrimination between human and machine translations. In addition, we analyse the human translations of the test set and identify important translation issues. Finally, based on these findings, we provide a set of recommendations for future human evaluations of MT. 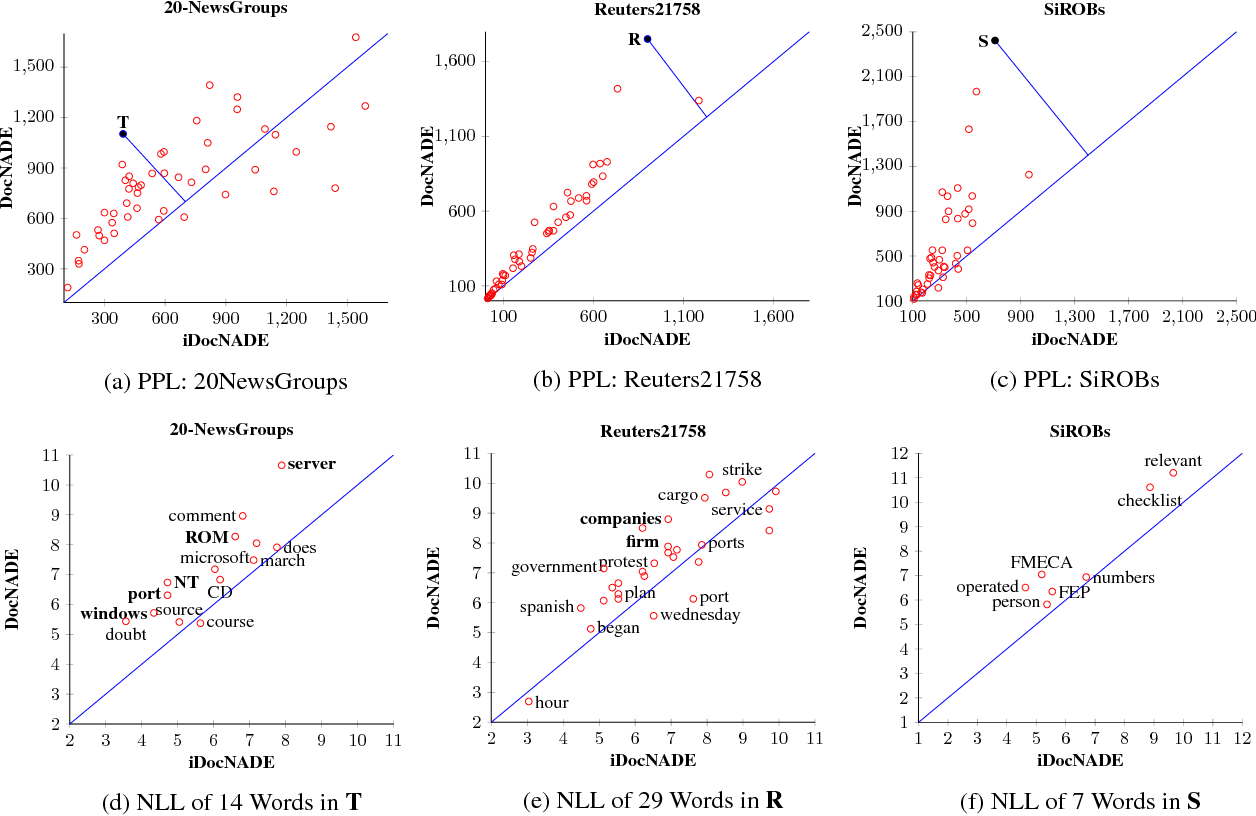 Context information around words helps in determining their actual meaning, for example "networks" used in contexts of artificial neural networks or biological neuron networks. Generative topic models infer topic-word distributions, taking no or only little context into account. Here, we extend a neural autoregressive topic model to exploit the full context information around words in a document in a language modeling fashion. This results in an improved performance in terms of generalization, interpretability and applicability. We apply our modeling approach to seven data sets from various domains and demonstrate that our approach consistently outperforms stateof-the-art generative topic models. With the learned representations, we show on an average a gain of 9.6% (0.57 Vs 0.52) in precision at retrieval fraction 0.02 and 7.2% (0.582 Vs 0.543) in F1 for text categorization. 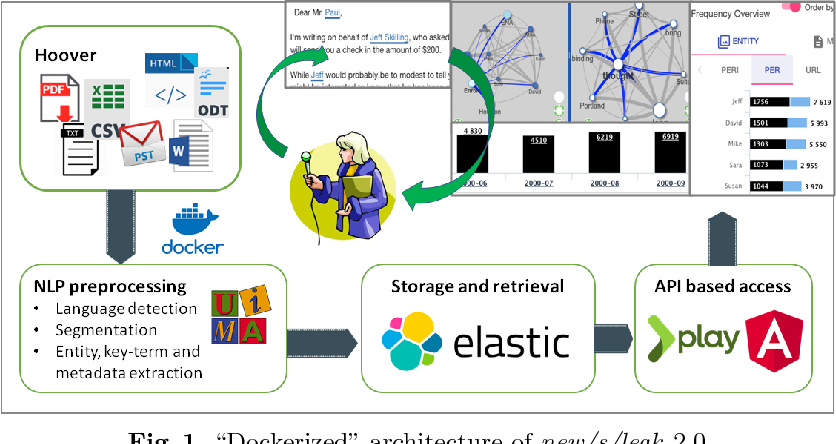 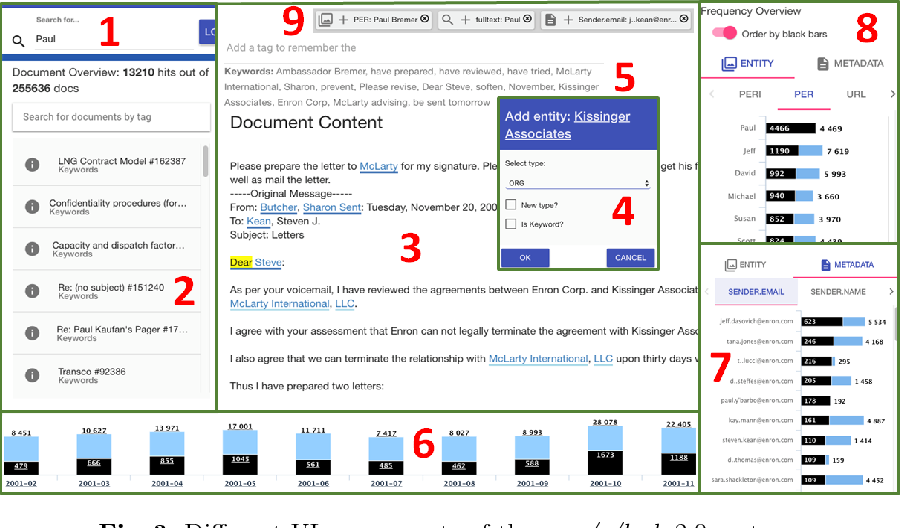 Investigative journalism in recent years is confronted with two major challenges: 1) vast amounts of unstructured data originating from large text collections such as leaks or answers to Freedom of Information requests, and 2) multi-lingual data due to intensified global cooperation and communication in politics, business and civil society. Faced with these challenges, journalists are increasingly cooperating in international networks. To support such collaborations, we present the new version of new/s/leak 2.0, our open-source software for content-based searching of leaks. It includes three novel main features: 1) automatic language detection and language-dependent information extraction for 40 languages, 2) entity and keyword visualization for efficient exploration, and 3) decentral deployment for analysis of confidential data from various formats. We illustrate the new analysis capabilities with an exemplary case study. 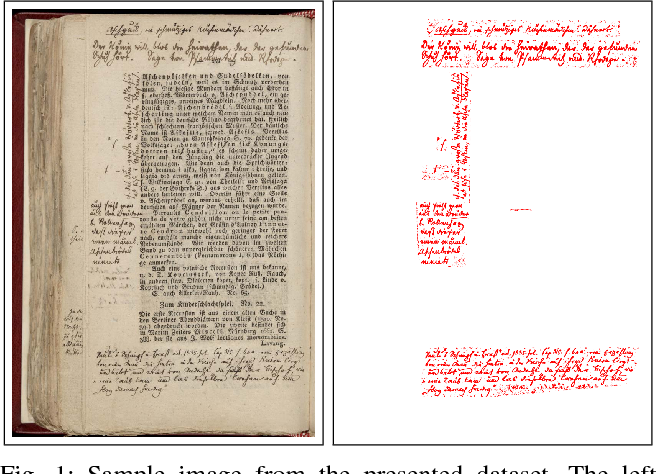 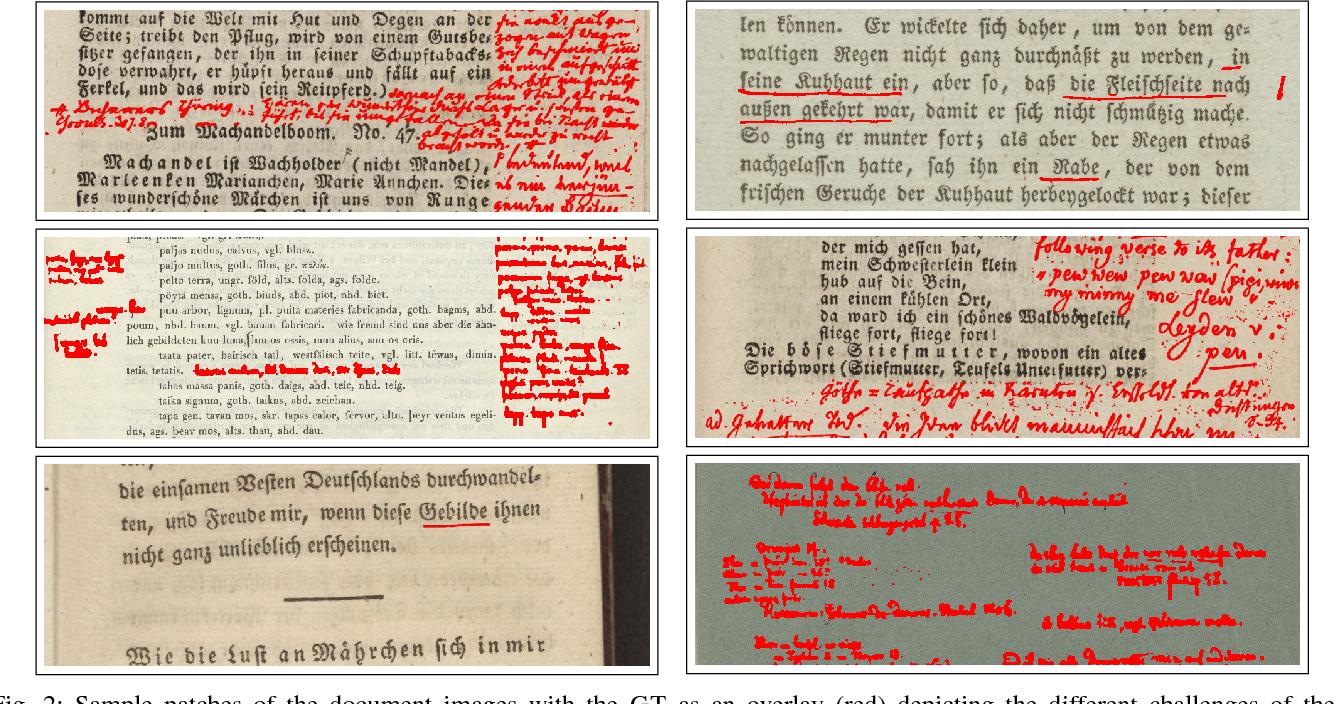 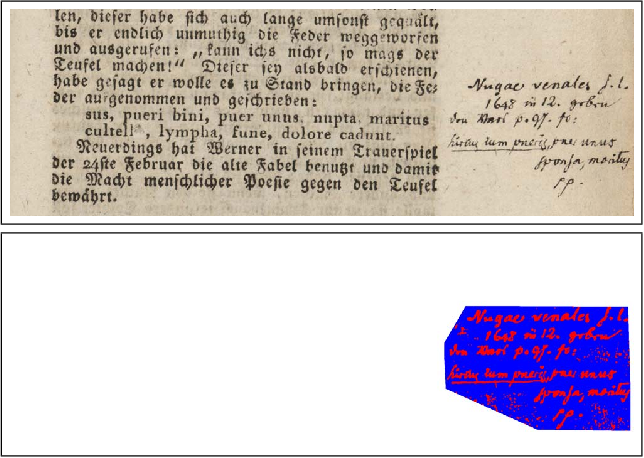 This paper introduces a very challenging dataset of historic German documents and evaluates Fully Convolutional Neural Network (FCNN) based methods to locate handwritten annotations of any kind in these documents. The handwritten annotations can appear in form of underlines and text by using various writing instruments, e.g., the use of pencils makes the data more challenging. We train and evaluate various end-to-end semantic segmentation approaches and report the results. The task is to classify the pixels of documents into two classes: background and handwritten annotation. The best model achieves a mean Intersection over Union (IoU) score of 95.6% on the test documents of the presented dataset. We also present a comparison of different strategies used for data augmentation and training on our presented dataset. For evaluation, we use the Layout Analysis Evaluator for the ICDAR 2017 Competition on Layout Analysis for Challenging Medieval Manuscripts.

Semantic annotation is fundamental to deal with large-scale lexical information, mapping the information to an enumerable set of categories over which rules and algorithms can be applied, and foundational ontology classes can be used as a formal set of categories for such tasks. A previous alignment between WordNet noun synsets and DOLCE provided a starting point for ontology-based annotation, but in NLP tasks verbs are also of substantial importance. This work presents an extension to the WordNet-DOLCE noun mapping, aligning verbs according to their links to nouns denoting perdurants, transferring to the verb the DOLCE class assigned to the noun that best represents that verb's occurrence. To evaluate the usefulness of this resource, we implemented a foundational ontology-based semantic annotation framework, that assigns a high-level foundational category to each word or phrase in a text, and compared it to a similar annotation tool, obtaining an increase of 9.05% in accuracy. 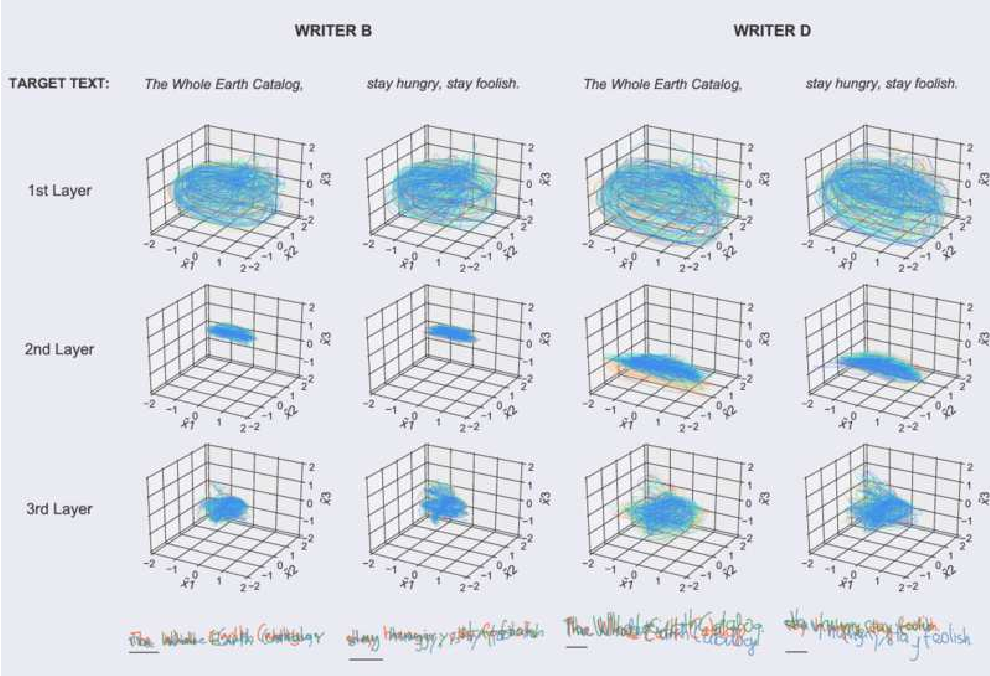 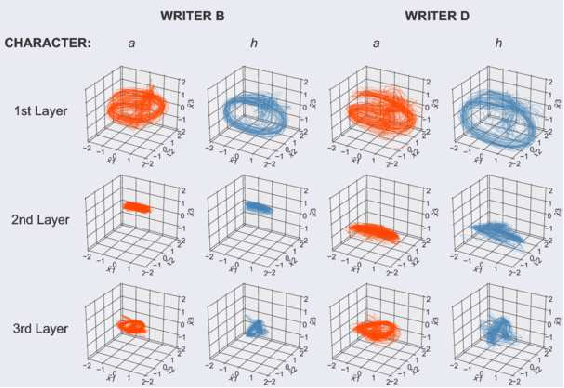 Recurrent neural networks (RNNs) are capable of learning to generate highly realistic, online handwritings in a wide variety of styles from a given text sequence. Furthermore, the networks can generate handwritings in the style of a particular writer when the network states are primed with a real sequence of pen movements from the writer. However, how populations of neurons in the RNN collectively achieve such performance still remains poorly understood. To tackle this problem, we investigated learned representations in RNNs by extracting low-dimensional, neural trajectories that summarize the activity of a population of neurons in the network during individual syntheses of handwritings. The neural trajectories show that different writing styles are encoded in different subspaces inside an internal space of the network. Within each subspace, different characters of the same style are represented as different state dynamics. These results demonstrate the effectiveness of analyzing the neural trajectory for intuitive understanding of how the RNNs work. 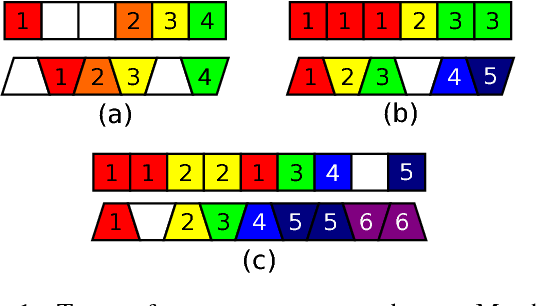 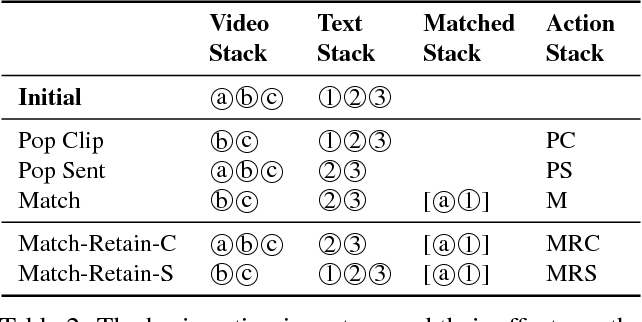 The alignment of heterogeneous sequential data (video to text) is an important and challenging problem. Standard techniques for this task, including Dynamic Time Warping (DTW) and Conditional Random Fields (CRFs), suffer from inherent drawbacks. Mainly, the Markov assumption implies that, given the immediate past, future alignment decisions are independent of further history. The separation between similarity computation and alignment decision also prevents end-to-end training. In this paper, we propose an end-to-end neural architecture where alignment actions are implemented as moving data between stacks of Long Short-term Memory (LSTM) blocks. This flexible architecture supports a large variety of alignment tasks, including one-to-one, one-to-many, skipping unmatched elements, and (with extensions) non-monotonic alignment. Extensive experiments on semi-synthetic and real datasets show that our algorithm outperforms state-of-the-art baselines.


* Accepted at CVPR 2018 (Spotlight). arXiv file includes the paper and the supplemental material 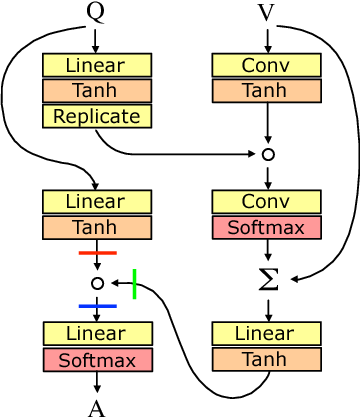 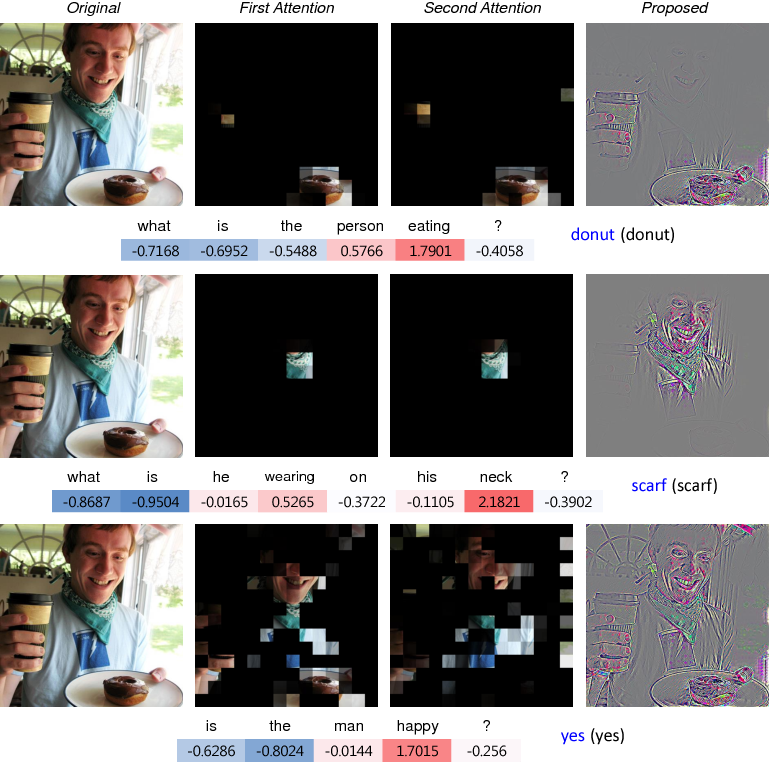 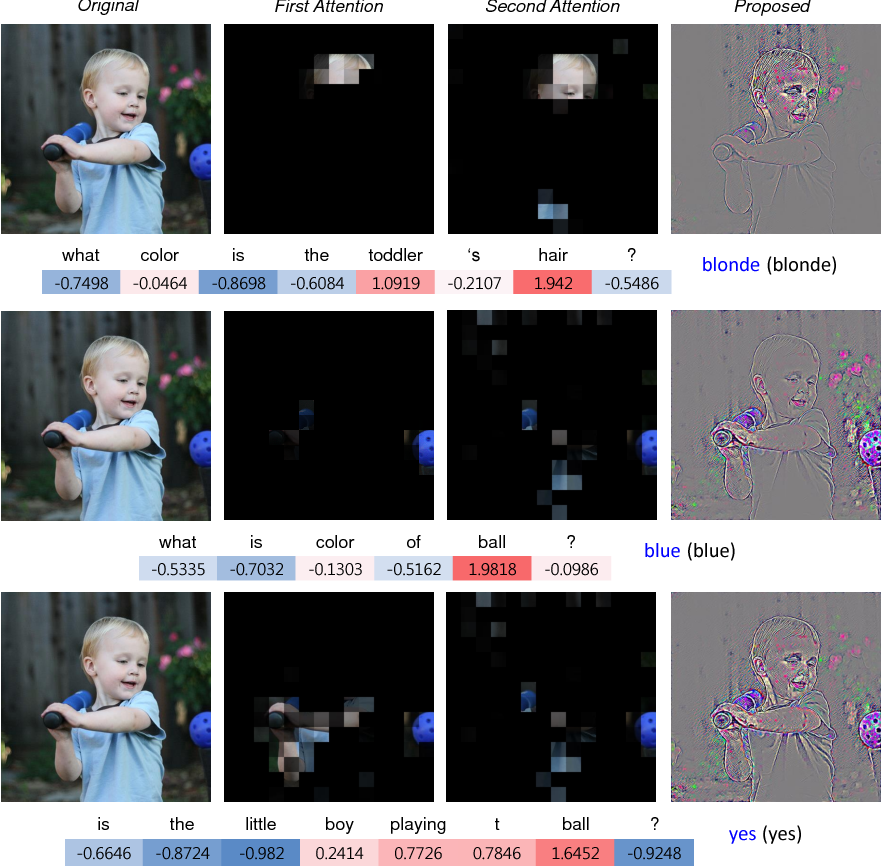 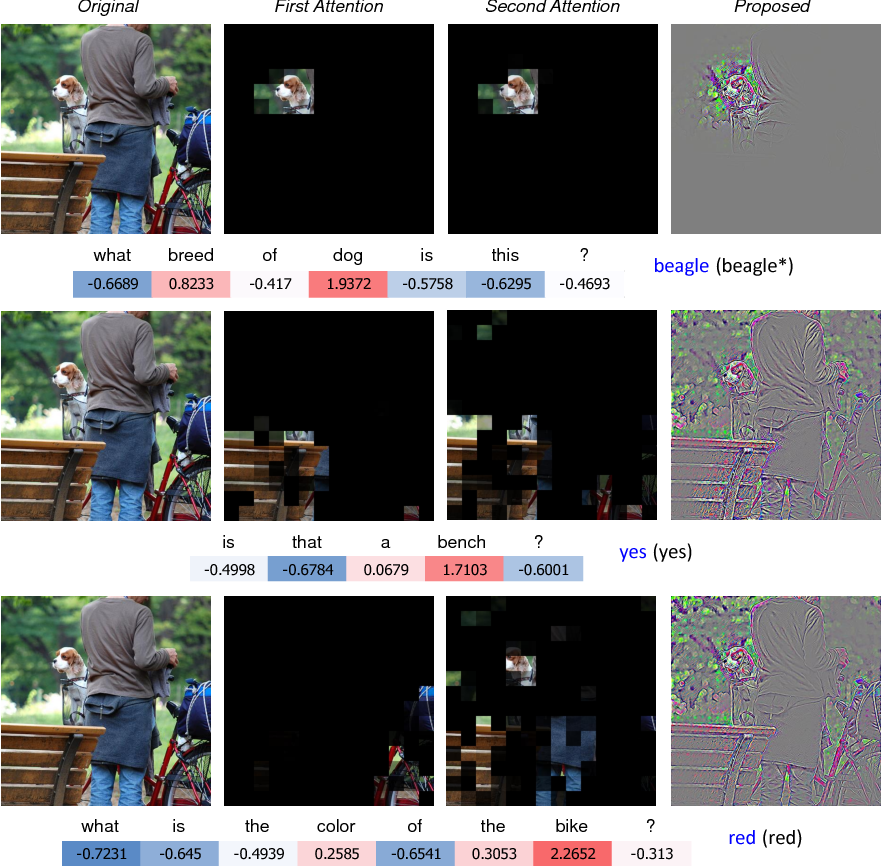 The visual explanation of learned representation of models helps to understand the fundamentals of learning. The attentional models of previous works used to visualize the attended regions over an image or text using their learned weights to confirm their intended mechanism. Kim et al. (2016) show that the Hadamard product in multimodal deep networks, which is well-known for the joint function of visual question answering tasks, implicitly performs an attentional mechanism for visual inputs. In this work, we extend their work to show that the Hadamard product in multimodal deep networks performs not only for visual inputs but also for textual inputs simultaneously using the proposed gradient-based visualization technique. The attentional effect of Hadamard product is visualized for both visual and textual inputs by analyzing the two inputs and an output of the Hadamard product with the proposed method and compared with learned attentional weights of a visual question answering model.