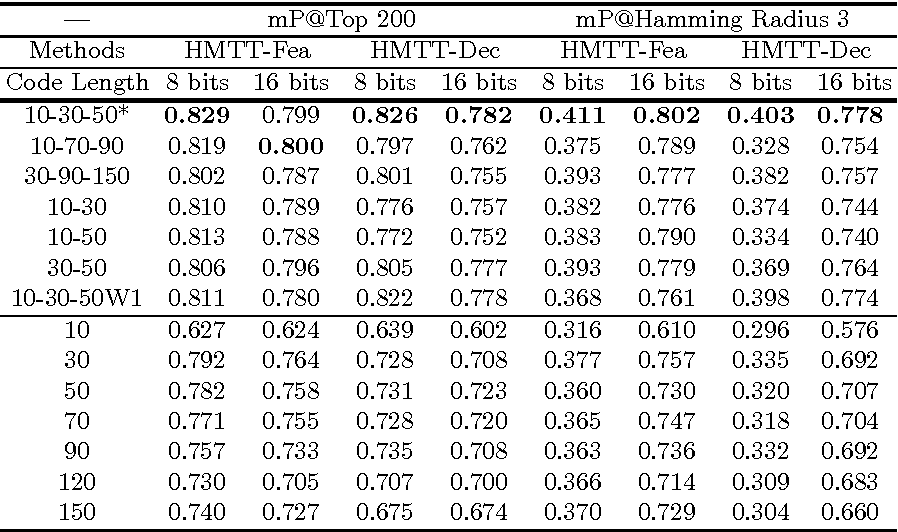 Due to computational and storage efficiencies of compact binary codes, hashing has been widely used for large-scale similarity search. Unfortunately, many existing hashing methods based on observed keyword features are not effective for short texts due to the sparseness and shortness. Recently, some researchers try to utilize latent topics of certain granularity to preserve semantic similarity in hash codes beyond keyword matching. However, topics of certain granularity are not adequate to represent the intrinsic semantic information. In this paper, we present a novel unified approach for short text Hashing using Multi-granularity Topics and Tags, dubbed HMTT. In particular, we propose a selection method to choose the optimal multi-granularity topics depending on the type of dataset, and design two distinct hashing strategies to incorporate multi-granularity topics. We also propose a simple and effective method to exploit tags to enhance the similarity of related texts. We carry out extensive experiments on one short text dataset as well as on one normal text dataset. The results demonstrate that our approach is effective and significantly outperforms baselines on several evaluation metrics. 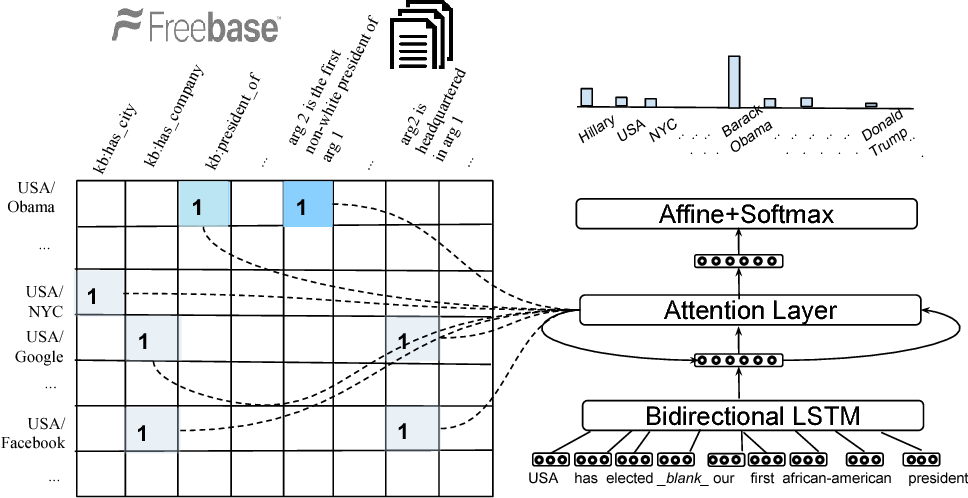 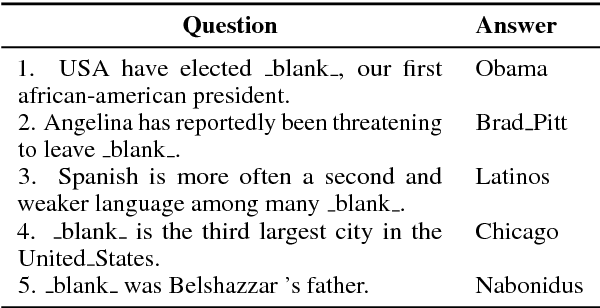 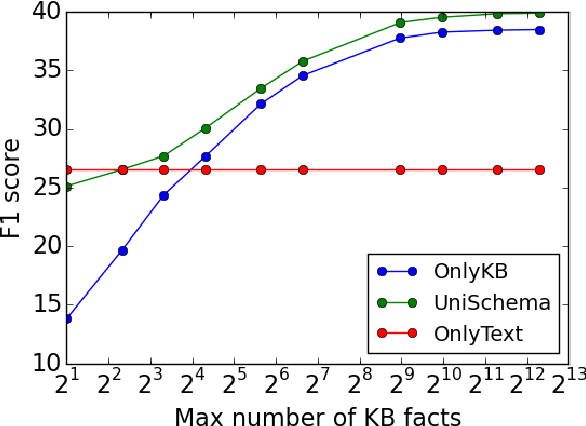 Existing question answering methods infer answers either from a knowledge base or from raw text. While knowledge base (KB) methods are good at answering compositional questions, their performance is often affected by the incompleteness of the KB. Au contraire, web text contains millions of facts that are absent in the KB, however in an unstructured form. {\it Universal schema} can support reasoning on the union of both structured KBs and unstructured text by aligning them in a common embedded space. In this paper we extend universal schema to natural language question answering, employing \emph{memory networks} to attend to the large body of facts in the combination of text and KB. Our models can be trained in an end-to-end fashion on question-answer pairs. Evaluation results on \spades fill-in-the-blank question answering dataset show that exploiting universal schema for question answering is better than using either a KB or text alone. This model also outperforms the current state-of-the-art by 8.5 $F_1$ points.\footnote{Code and data available in \url{https://rajarshd.github.io/TextKBQA}}

Introduction. The area of natural language processing considers AI-complete tasks that cannot be solved using traditional algorithmic actions. Such tasks are commonly implemented with the usage of machine learning methodology and means of computer linguistics. One of the preprocessing tasks of a text is the search of noun phrases. The accuracy of this task has implications for the effectiveness of many other tasks in the area of natural language processing. In spite of the active development of research in the area of natural language processing, the investigation of the search for noun phrases within Ukrainian texts are still at an early stage. Results. The different methods of noun phrases detection have been analyzed. The expediency of the representation of sentences as a tree structure has been justified. The key disadvantage of many methods of noun phrase detection is the severe dependence of the effectiveness of their detection from the features of a certain language. Taking into account the unified format of sentence processing and the availability of the trained model for the building of sentence trees for Ukrainian texts, the Universal Dependency model has been chosen. The complex method of noun phrases detection in Ukrainian texts utilizing Universal Dependencies means and named-entity recognition model has been suggested. Experimental verification of the effectiveness of the suggested method on the corpus of Ukrainian news has been performed. Different metrics of method accuracy have been calculated. Conclusions. The results obtained can indicate that the suggested method can be used to find noun phrases in Ukrainian texts. An accuracy increase of the method can be made with the usage of appropriate named-entity recognition models according to a subject area. 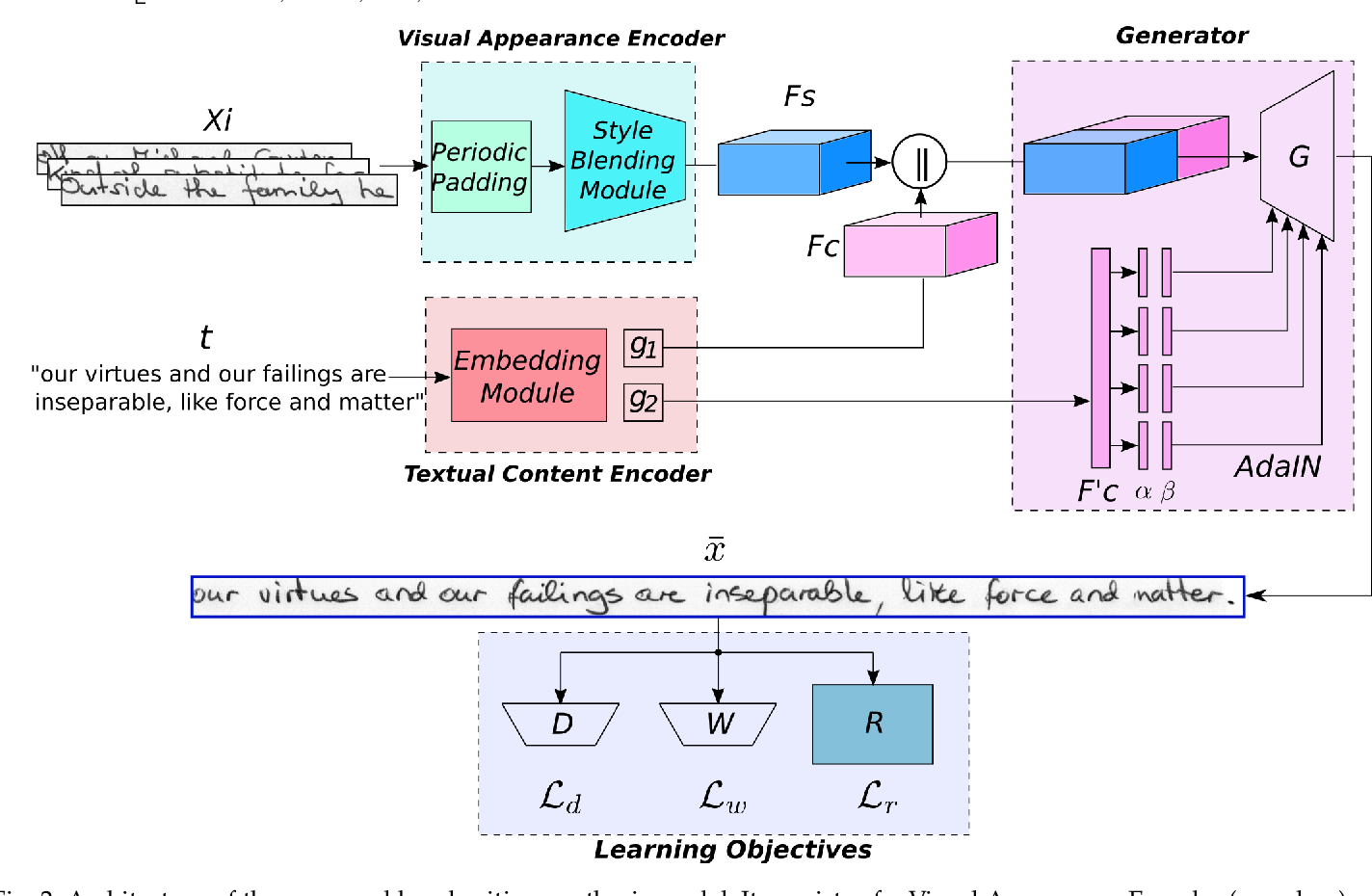 Handwritten Text Recognition has achieved an impressive performance in public benchmarks. However, due to the high inter- and intra-class variability between handwriting styles, such recognizers need to be trained using huge volumes of manually labeled training data. To alleviate this labor-consuming problem, synthetic data produced with TrueType fonts has been often used in the training loop to gain volume and augment the handwriting style variability. However, there is a significant style bias between synthetic and real data which hinders the improvement of recognition performance. To deal with such limitations, we propose a generative method for handwritten text-line images, which is conditioned on both visual appearance and textual content. Our method is able to produce long text-line samples with diverse handwriting styles. Once properly trained, our method can also be adapted to new target data by only accessing unlabeled text-line images to mimic handwritten styles and produce images with any textual content. Extensive experiments have been done on making use of the generated samples to boost Handwritten Text Recognition performance. Both qualitative and quantitative results demonstrate that the proposed approach outperforms the current state of the art. 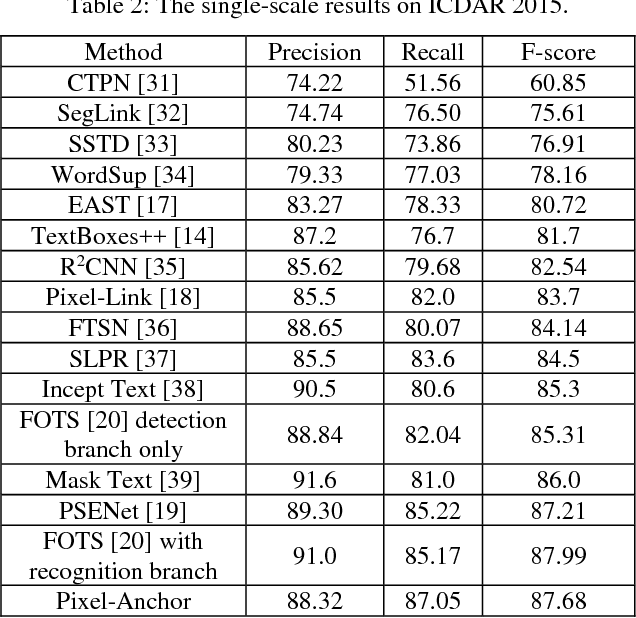 Recently, semantic segmentation and general object detection frameworks have been widely adopted by scene text detecting tasks. However, both of them alone have obvious shortcomings in practice. In this paper, we propose a novel end-to-end trainable deep neural network framework, named Pixel-Anchor, which combines semantic segmentation and SSD in one network by feature sharing and anchor-level attention mechanism to detect oriented scene text. To deal with scene text which has large variances in size and aspect ratio, we combine FPN and ASPP operation as our encoder-decoder structure in the semantic segmentation part, and propose a novel Adaptive Predictor Layer in the SSD. Pixel-Anchor detects scene text in a single network forward pass, no complex post-processing other than an efficient fusion Non-Maximum Suppression is involved. We have benchmarked the proposed Pixel-Anchor on the public datasets. Pixel-Anchor outperforms the competing methods in terms of text localization accuracy and run speed, more specifically, on the ICDAR 2015 dataset, the proposed algorithm achieves an F-score of 0.8768 at 10 FPS for 960 x 1728 resolution images. 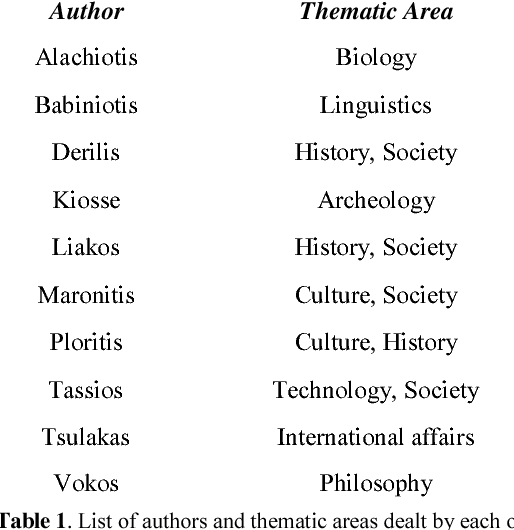 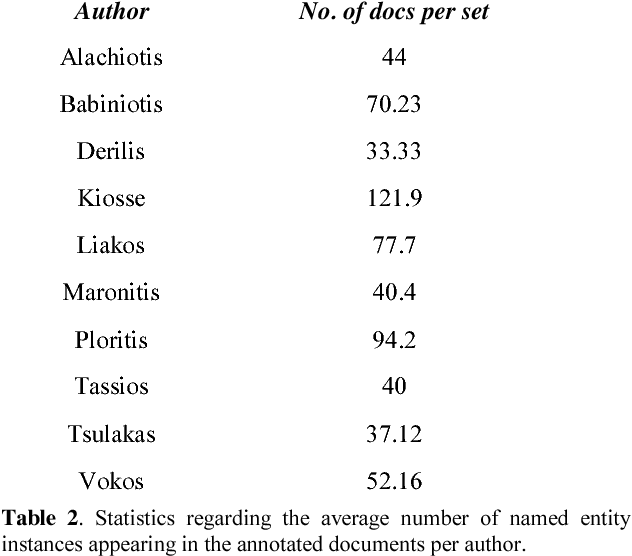 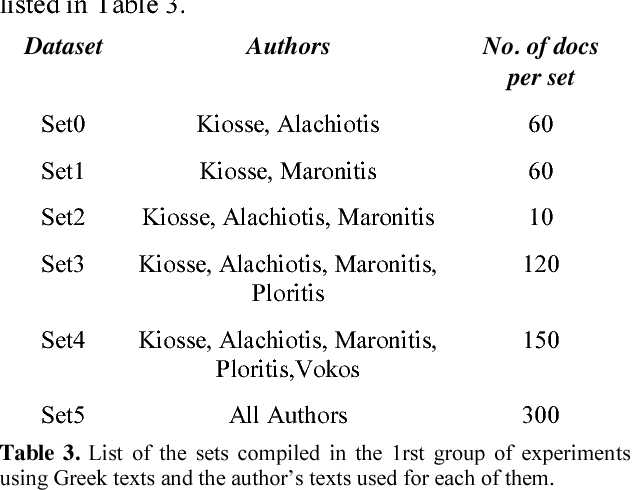 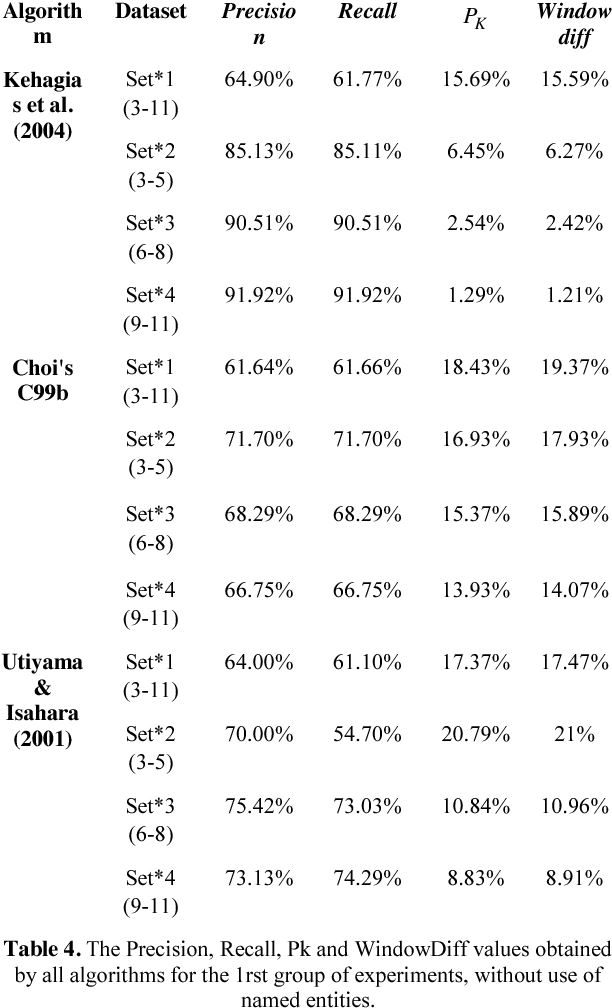 In this paper we examine the benefit of performing named entity recognition (NER) and co-reference resolution to an English and a Greek corpus used for text segmentation. The aim here is to examine whether the combination of text segmentation and information extraction can be beneficial for the identification of the various topics that appear in a document. NER was performed manually in the English corpus and was compared with the output produced by publicly available annotation tools while, an already existing tool was used for the Greek corpus. Produced annotations from both corpora were manually corrected and enriched to cover four types of named entities. Co-reference resolution i.e., substitution of every reference of the same instance with the same named entity identifier was subsequently performed. The evaluation, using five text segmentation algorithms for the English corpus and four for the Greek corpus leads to the conclusion that, the benefit highly depends on the segment's topic, the number of named entity instances appearing in it, as well as the segment's length. 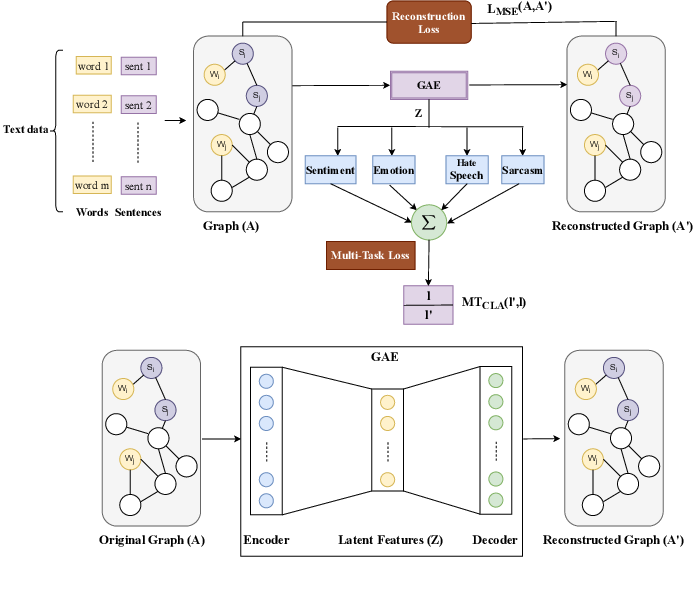 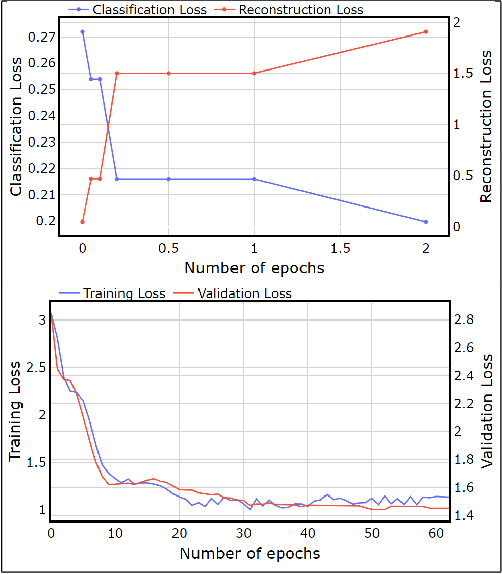 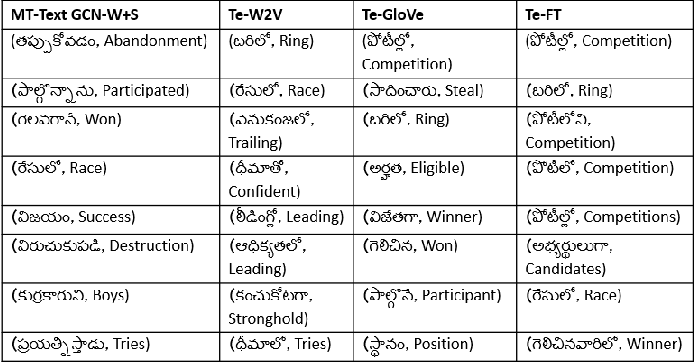 Graph Convolutional Networks (GCN) have achieved state-of-art results on single text classification tasks like sentiment analysis, emotion detection, etc. However, the performance is achieved by testing and reporting on resource-rich languages like English. Applying GCN for multi-task text classification is an unexplored area. Moreover, training a GCN or adopting an English GCN for Indian languages is often limited by data availability, rich morphological variation, syntax, and semantic differences. In this paper, we study the use of GCN for the Telugu language in single and multi-task settings for four natural language processing (NLP) tasks, viz. sentiment analysis (SA), emotion identification (EI), hate-speech (HS), and sarcasm detection (SAR). In order to evaluate the performance of GCN with one of the Indian languages, Telugu, we analyze the GCN based models with extensive experiments on four downstream tasks. In addition, we created an annotated Telugu dataset, TEL-NLP, for the four NLP tasks. Further, we propose a supervised graph reconstruction method, Multi-Task Text GCN (MT-Text GCN) on the Telugu that leverages to simultaneously (i) learn the low-dimensional word and sentence graph embeddings from word-sentence graph reconstruction using graph autoencoder (GAE) and (ii) perform multi-task text classification using these latent sentence graph embeddings. We argue that our proposed MT-Text GCN achieves significant improvements on TEL-NLP over existing Telugu pretrained word embeddings, and multilingual pretrained Transformer models: mBERT, and XLM-R. On TEL-NLP, we achieve a high F1-score for four NLP tasks: SA (0.84), EI (0.55), HS (0.83) and SAR (0.66). Finally, we show our model's quantitative and qualitative analysis on the four NLP tasks in Telugu. 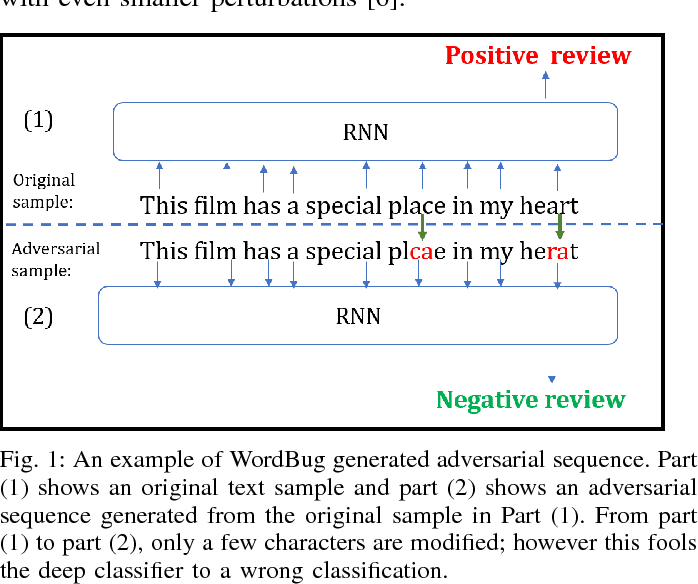 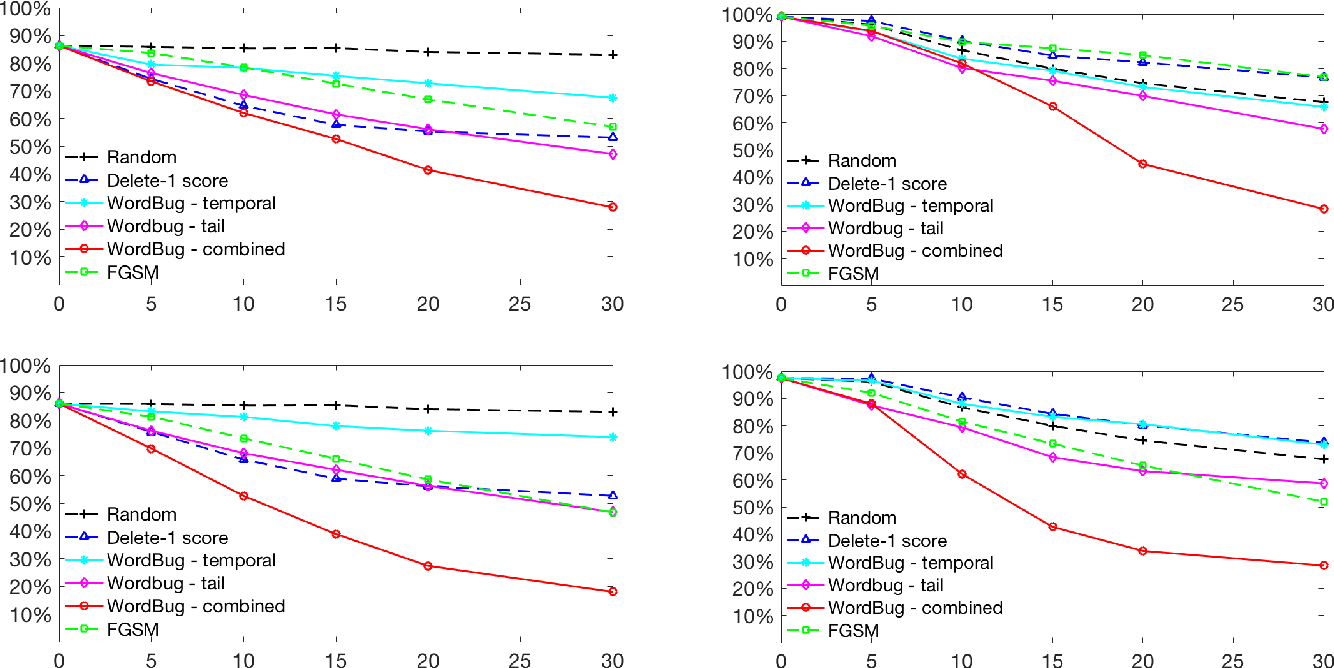 Although various techniques have been proposed to generate adversarial samples for white-box attacks on text, little attention has been paid to black-box attacks, which are more realistic scenarios. In this paper, we present a novel algorithm, DeepWordBug, to effectively generate small text perturbations in a black-box setting that forces a deep-learning classifier to misclassify a text input. We employ novel scoring strategies to identify the critical tokens that, if modified, cause the classifier to make an incorrect prediction. Simple character-level transformations are applied to the highest-ranked tokens in order to minimize the edit distance of the perturbation, yet change the original classification. We evaluated DeepWordBug on eight real-world text datasets, including text classification, sentiment analysis, and spam detection. We compare the result of DeepWordBug with two baselines: Random (Black-box) and Gradient (White-box). Our experimental results indicate that DeepWordBug reduces the prediction accuracy of current state-of-the-art deep-learning models, including a decrease of 68\% on average for a Word-LSTM model and 48\% on average for a Char-CNN model. 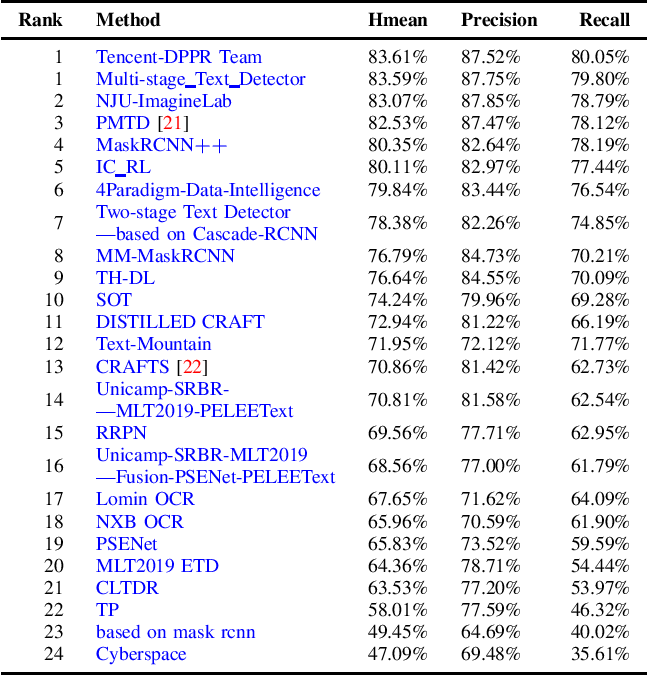 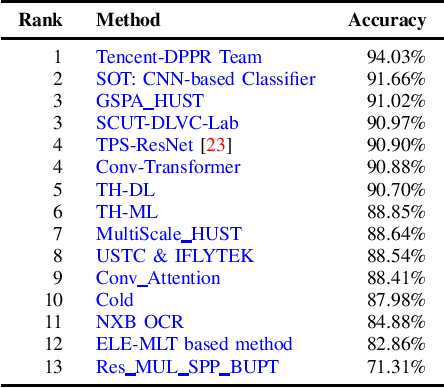 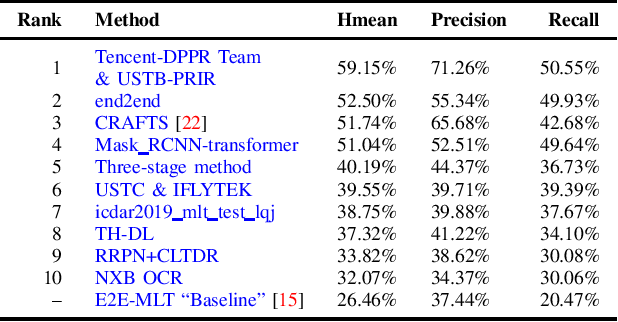 With the growing cosmopolitan culture of modern cities, the need of robust Multi-Lingual scene Text (MLT) detection and recognition systems has never been more immense. With the goal to systematically benchmark and push the state-of-the-art forward, the proposed competition builds on top of the RRC-MLT-2017 with an additional end-to-end task, an additional language in the real images dataset, a large scale multi-lingual synthetic dataset to assist the training, and a baseline End-to-End recognition method. The real dataset consists of 20,000 images containing text from 10 languages. The challenge has 4 tasks covering various aspects of multi-lingual scene text: (a) text detection, (b) cropped word script classification, (c) joint text detection and script classification and (d) end-to-end detection and recognition. In total, the competition received 60 submissions from the research and industrial communities. This paper presents the dataset, the tasks and the findings of the presented RRC-MLT-2019 challenge. 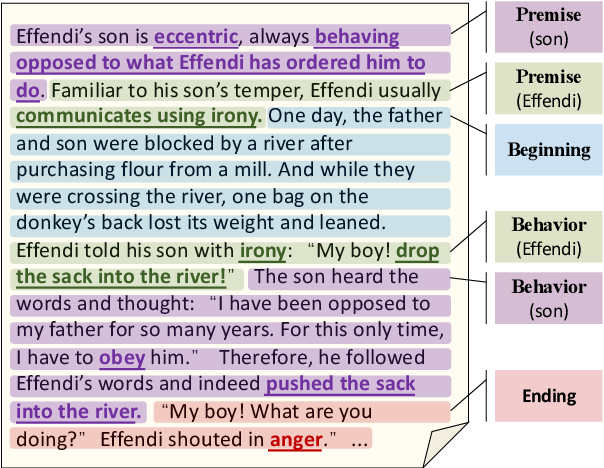 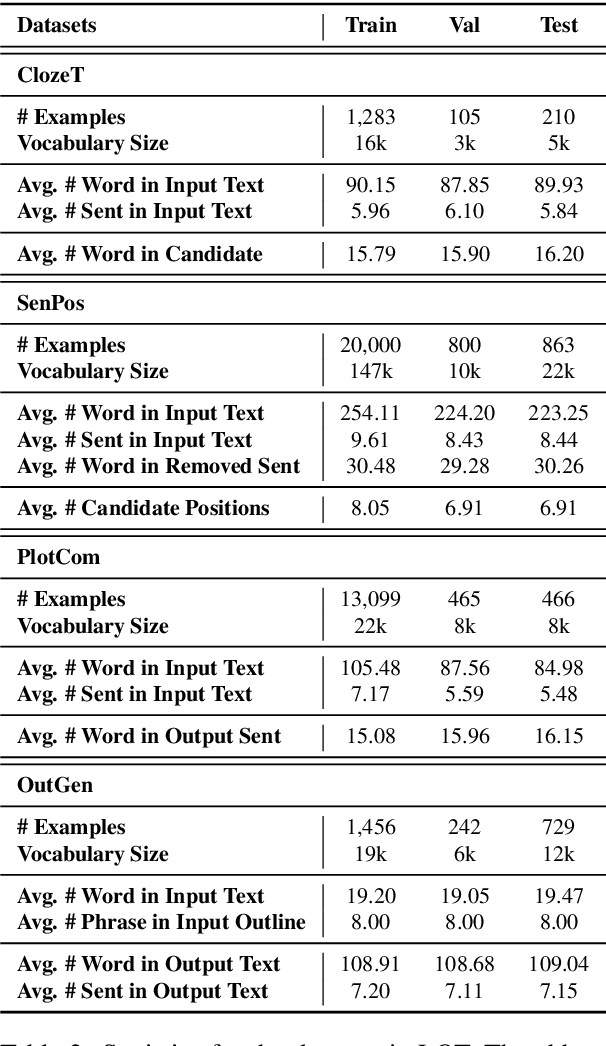 Standard multi-task benchmarks are essential for driving the progress of general pretraining models to generalize to various downstream tasks. However, existing benchmarks such as GLUE and GLGE tend to focus on short text understanding and generation tasks, without considering long text modeling, which requires many distinct capabilities such as modeling long-range commonsense and discourse relations, as well as the coherence and controllability of generation. The lack of standardized benchmarks makes it difficult to fully evaluate these capabilities of a model and fairly compare different models, especially Chinese pretraining models. Therefore, we propose LOT, a benchmark including two understanding and two generation tasks for Chinese long text modeling evaluation. We construct the datasets for the tasks based on various kinds of human-written Chinese stories. Besides, we release an encoder-decoder Chinese long text pretraining model named LongLM with up to 1 billion parameters. We pretrain LongLM on 120G Chinese novels with two generative tasks including text infilling and conditional continuation. Extensive experiments on LOT demonstrate that LongLM matches the performance of similar-sized pretraining models on the understanding tasks and outperforms strong baselines substantially on the generation tasks.