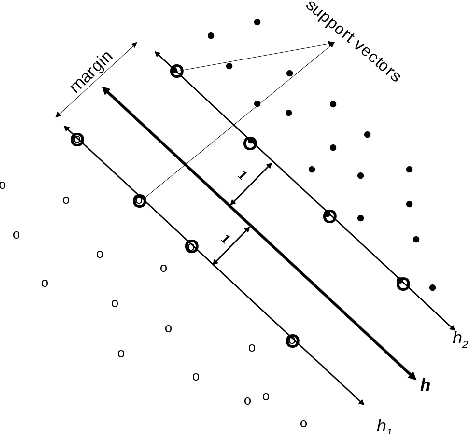 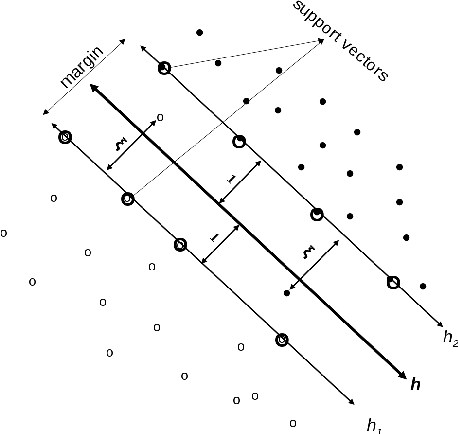 Text mining is a process of extracting information of interest from text. Such a method includes techniques from various areas such as Information Retrieval (IR), Natural Language Processing (NLP), and Information Extraction (IE). In this study, text mining methods are applied to extract causal relations from maritime accident investigation reports collected from the Marine Accident Investigation Branch (MAIB). These causal relations provide information on various mechanisms behind accidents, including human and organizational factors relating to the accident. The objective of this study is to facilitate the analysis of the maritime accident investigation reports, by means of extracting contributory causes with more feasibility. A careful investigation of contributory causes from the reports provide opportunity to improve safety in future. Two methods have been employed in this study to extract the causal relations. They are 1) Pattern classification method and 2) Connectives method. The earlier one uses naive Bayes and Support Vector Machines (SVM) as classifiers. The latter simply searches for the words connecting cause and effect in sentences. The causal patterns extracted using these two methods are compared to the manual (human expert) extraction. The pattern classification method showed a fair and sensible performance with F-measure(average) = 65% when compared to connectives method with F-measure(average) = 58%. This study is an evidence, that text mining methods could be employed in extracting causal relations from marine accident investigation reports. 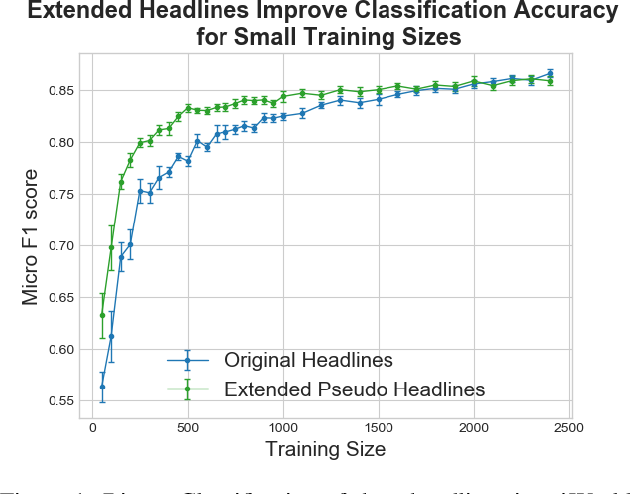 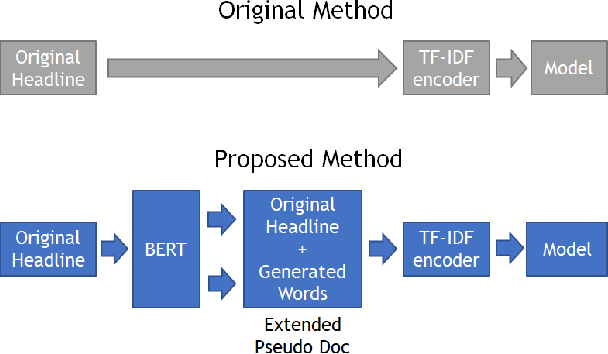 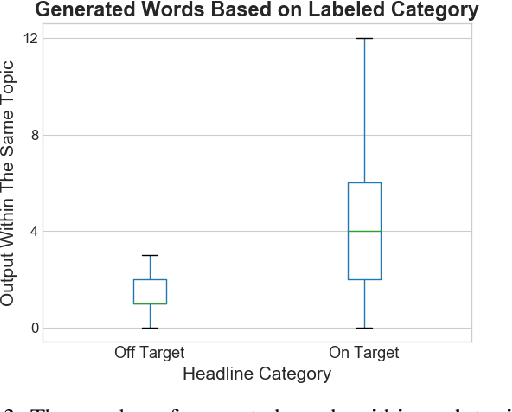 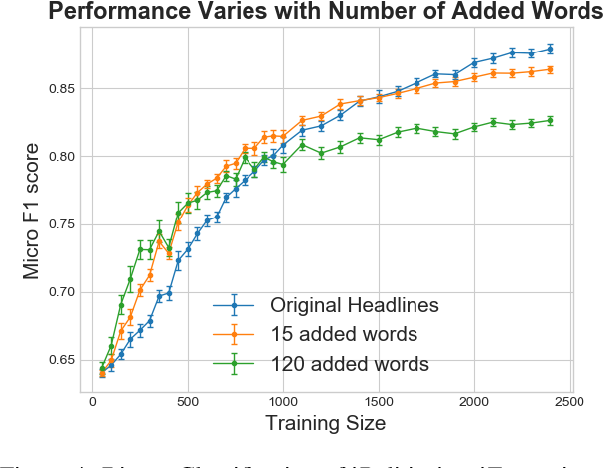 Short-text classification, like all data science, struggles to achieve high performance using limited data. As a solution, a short sentence may be expanded with new and relevant feature words to form an artificially enlarged dataset, and add new features to testing data. This paper applies a novel approach to text expansion by generating new words directly for each input sentence, thus requiring no additional datasets or previous training. In this unsupervised approach, new keywords are formed within the hidden states of a pre-trained language model and then used to create extended pseudo documents. The word generation process was assessed by examining how well the predicted words matched to topics of the input sentence. It was found that this method could produce 3-10 relevant new words for each target topic, while generating just 1 word related to each non-target topic. Generated words were then added to short news headlines to create extended pseudo headlines. Experimental results have shown that models trained using the pseudo headlines can improve classification accuracy when limiting the number of training examples.

Effectiveness of Self Normalizing Neural Networks for Text Classification

Self Normalizing Neural Networks(SNN) proposed on Feed Forward Neural Networks(FNN) outperform regular FNN architectures in various machine learning tasks. Particularly in the domain of Computer Vision, the activation function Scaled Exponential Linear Units (SELU) proposed for SNNs, perform better than other non linear activations such as ReLU. The goal of SNN is to produce a normalized output for a normalized input. Established neural network architectures like feed forward networks and Convolutional Neural Networks(CNN) lack the intrinsic nature of normalizing outputs. Hence, requiring additional layers such as Batch Normalization. Despite the success of SNNs, their characteristic features on other network architectures like CNN haven't been explored, especially in the domain of Natural Language Processing. In this paper we aim to show the effectiveness of proposed, Self Normalizing Convolutional Neural Networks(SCNN) on text classification. We analyze their performance with the standard CNN architecture used on several text classification datasets. Our experiments demonstrate that SCNN achieves comparable results to standard CNN model with significantly fewer parameters. Furthermore it also outperforms CNN with equal number of parameters. 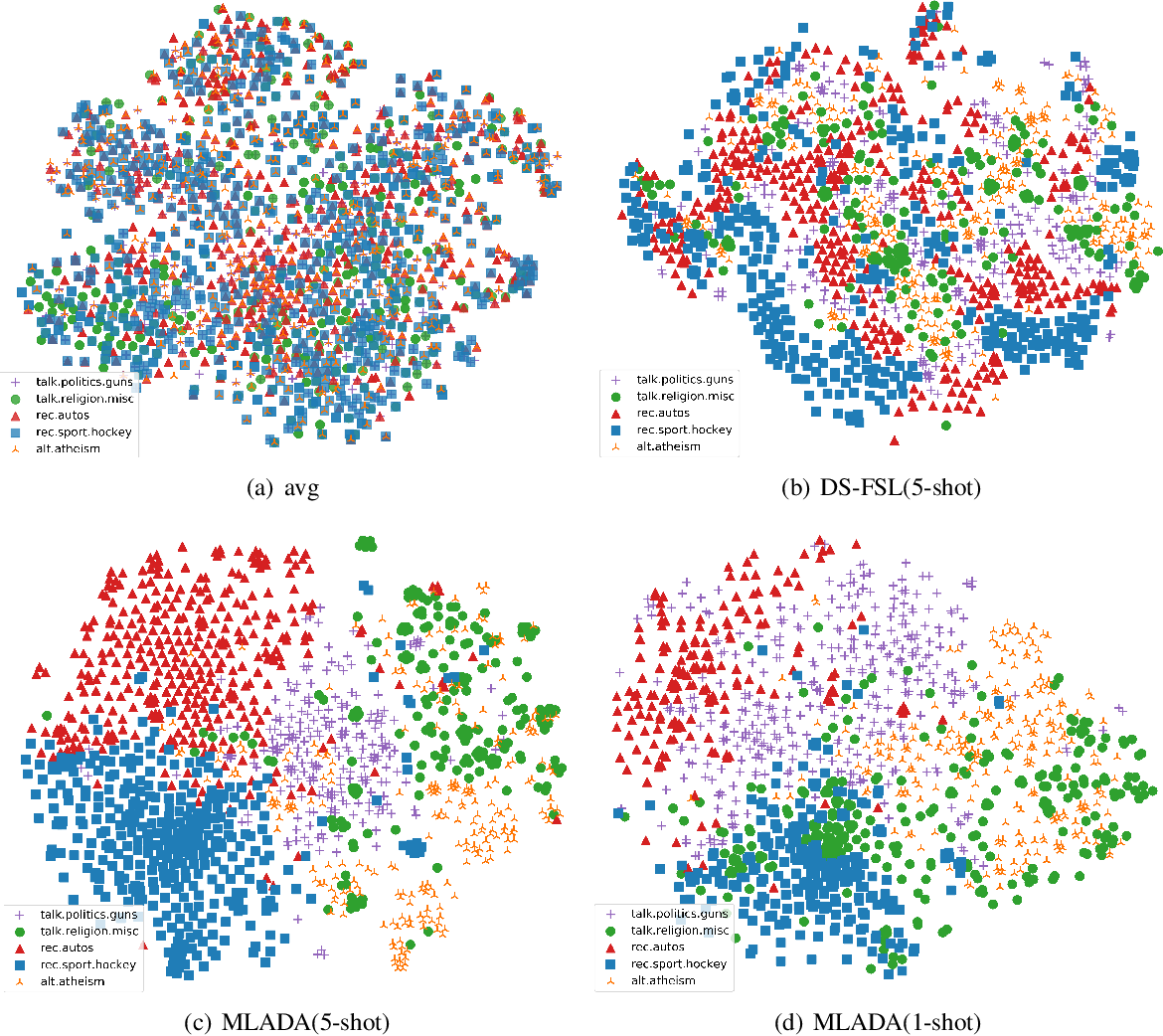 Meta-learning has emerged as a trending technique to tackle few-shot text classification and achieved state-of-the-art performance. However, existing solutions heavily rely on the exploitation of lexical features and their distributional signatures on training data, while neglecting to strengthen the model's ability to adapt to new tasks. In this paper, we propose a novel meta-learning framework integrated with an adversarial domain adaptation network, aiming to improve the adaptive ability of the model and generate high-quality text embedding for new classes. Extensive experiments are conducted on four benchmark datasets and our method demonstrates clear superiority over the state-of-the-art models in all the datasets. In particular, the accuracy of 1-shot and 5-shot classification on the dataset of 20 Newsgroups is boosted from 52.1% to 59.6%, and from 68.3% to 77.8%, respectively. 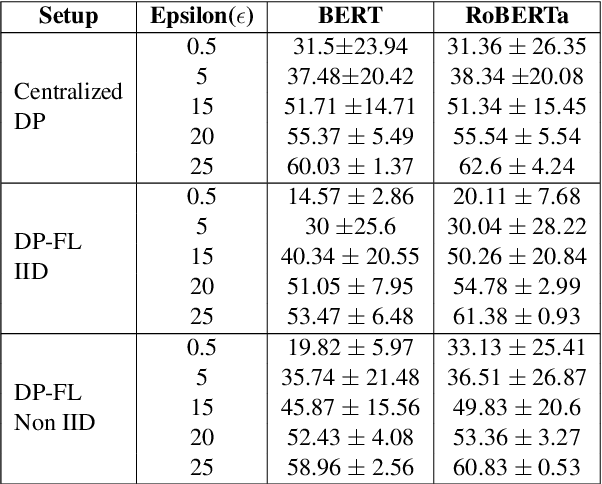 Privacy is important considering the financial Domain as such data is highly confidential and sensitive. Natural Language Processing (NLP) techniques can be applied for text classification and entity detection purposes in financial domains such as customer feedback sentiment analysis, invoice entity detection, categorisation of financial documents by type etc. Due to the sensitive nature of such data, privacy measures need to be taken for handling and training large models with such data. In this work, we propose a contextualized transformer (BERT and RoBERTa) based text classification model integrated with privacy features such as Differential Privacy (DP) and Federated Learning (FL). We present how to privately train NLP models and desirable privacy-utility tradeoffs and evaluate them on the Financial Phrase Bank dataset. 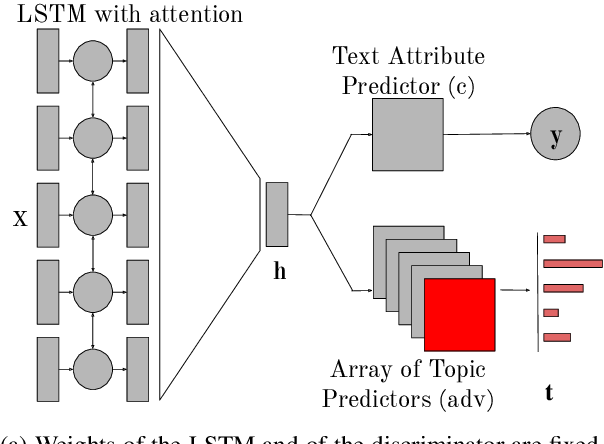 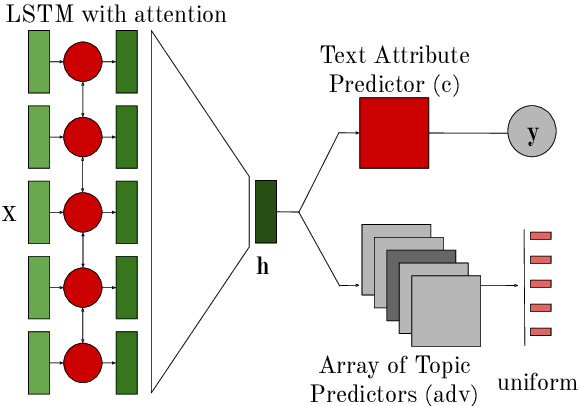 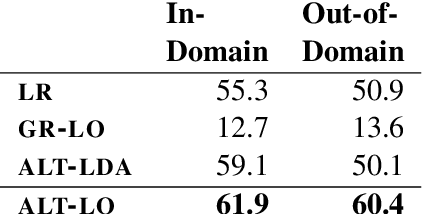 Despite impressive performance on many text classification tasks, deep neural networks tend to learn frequent superficial patterns that are specific to the training data and do not always generalize well. In this work, we observe this limitation with respect to the task of native language identification. We find that standard text classifiers which perform well on the test set end up learning topical features which are confounds of the prediction task (e.g., if the input text mentions Sweden, the classifier predicts that the author's native language is Swedish). We propose a method that represents the latent topical confounds and a model which "unlearns" confounding features by predicting both the label of the input text and the confound; but we train the two predictors adversarially in an alternating fashion to learn a text representation that predicts the correct label but is less prone to using information about the confound. We show that this model generalizes better and learns features that are indicative of the writing style rather than the content. 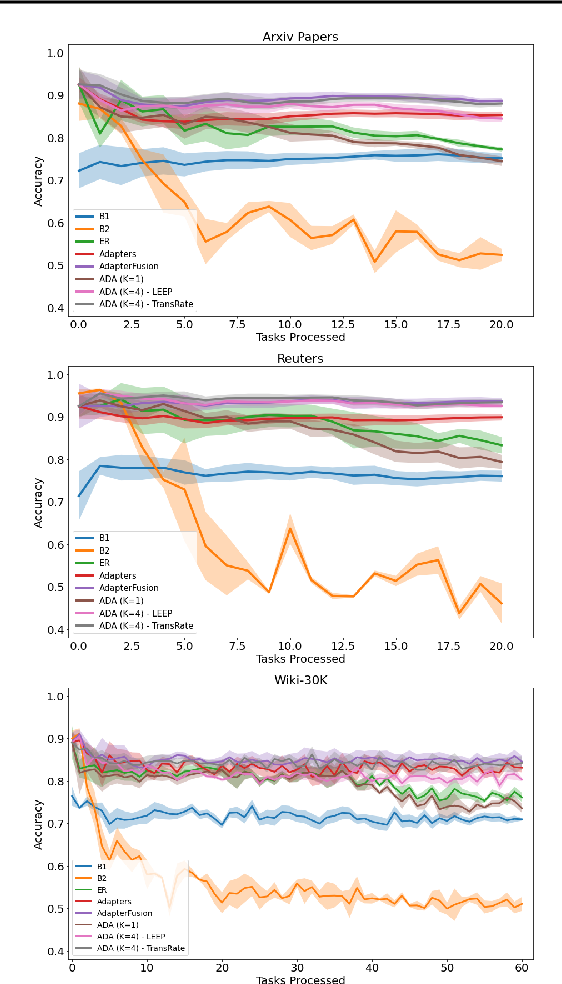 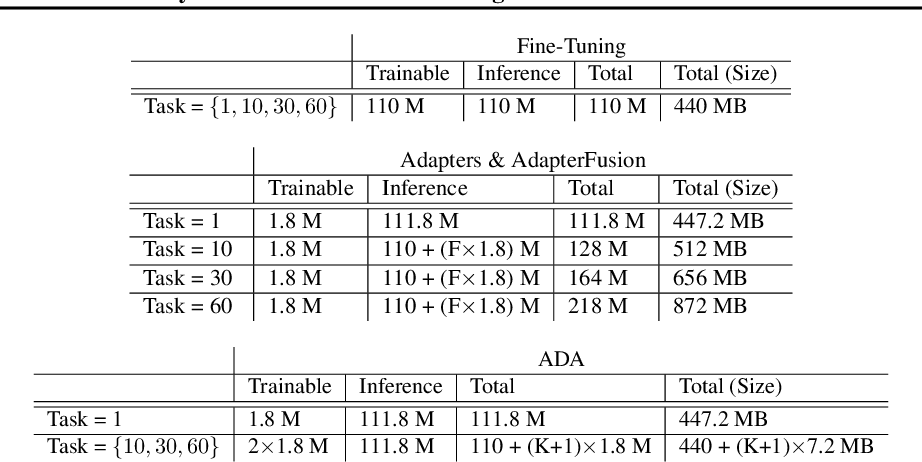 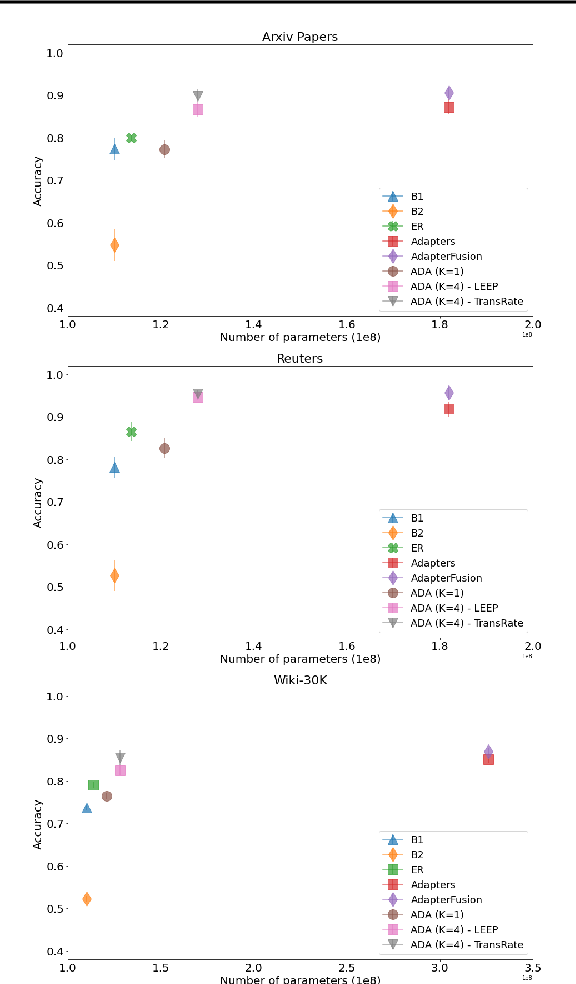 Learning text classifiers based on pre-trained language models has become the standard practice in natural language processing applications. Unfortunately, training large neural language models, such as transformers, from scratch is very costly and requires a vast amount of training data, which might not be available in the application domain of interest. Moreover, in many real-world scenarios, classes are uncovered as more data is seen, calling for class-incremental modelling approaches. In this work we devise a method to perform text classification using pre-trained models on a sequence of classification tasks provided in sequence. We formalize the problem as a continual learning problem where the algorithm learns new tasks without performance degradation on the previous ones and without re-training the model from scratch. We empirically demonstrate that our method requires significantly less model parameters compared to other state of the art methods and that it is significantly faster at inference time. The tight control on the number of model parameters, and so the memory, is not only improving efficiency. It is making possible the usage of the algorithm in real-world applications where deploying a solution with a constantly increasing memory consumption is just unrealistic. While our method suffers little forgetting, it retains a predictive performance on-par with state of the art but less memory efficient methods. 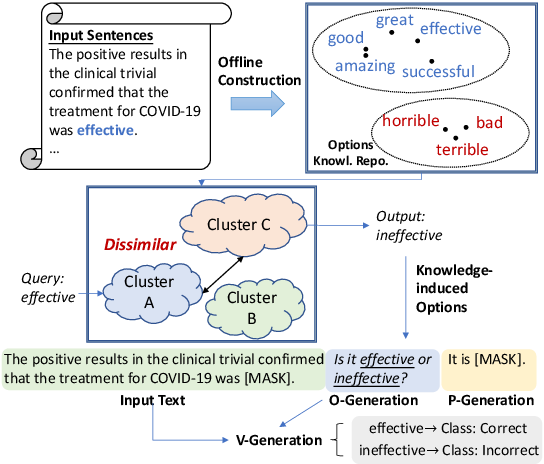 Prompt-based fine-tuning has boosted the performance of Pre-trained Language Models (PLMs) on few-shot text classification by employing task-specific prompts. Yet, PLMs are unfamiliar with prompt-style expressions during pre-training, which limits the few-shot learning performance on downstream tasks. It would be desirable if the models can acquire some prompting knowledge before adaptation to specific NLP tasks. We present the Unified Prompt Tuning (UPT) framework, leading to better few-shot text classification for BERT-style models by explicitly capturing prompting semantics from non-target NLP datasets. In UPT, a novel paradigm Prompt-Options-Verbalizer is proposed for joint prompt learning across different NLP tasks, forcing PLMs to capture task-invariant prompting knowledge. We further design a self-supervised task named Knowledge-enhanced Selective Masked Language Modeling to improve the PLM's generalization abilities for accurate adaptation to previously unseen tasks. After multi-task learning across multiple tasks, the PLM can be better prompt-tuned towards any dissimilar target tasks in low-resourced settings. Experiments over a variety of NLP tasks show that UPT consistently outperforms state-of-the-arts for prompt-based fine-tuning.

Traditional text classification approaches often require a good amount of labeled data, which is difficult to obtain, especially in restricted domains or less widespread languages. This lack of labeled data has led to the rise of low-resource methods, that assume low data availability in natural language processing. Among them, zero-shot learning stands out, which consists of learning a classifier without any previously labeled data. The best results reported with this approach use language models such as Transformers, but fall into two problems: high execution time and inability to handle long texts as input. This paper proposes a new model, ZeroBERTo, which leverages an unsupervised clustering step to obtain a compressed data representation before the classification task. We show that ZeroBERTo has better performance for long inputs and shorter execution time, outperforming XLM-R by about 12% in the F1 score in the FolhaUOL dataset. Keywords: Low-Resource NLP, Unlabeled data, Zero-Shot Learning, Topic Modeling, Transformers. 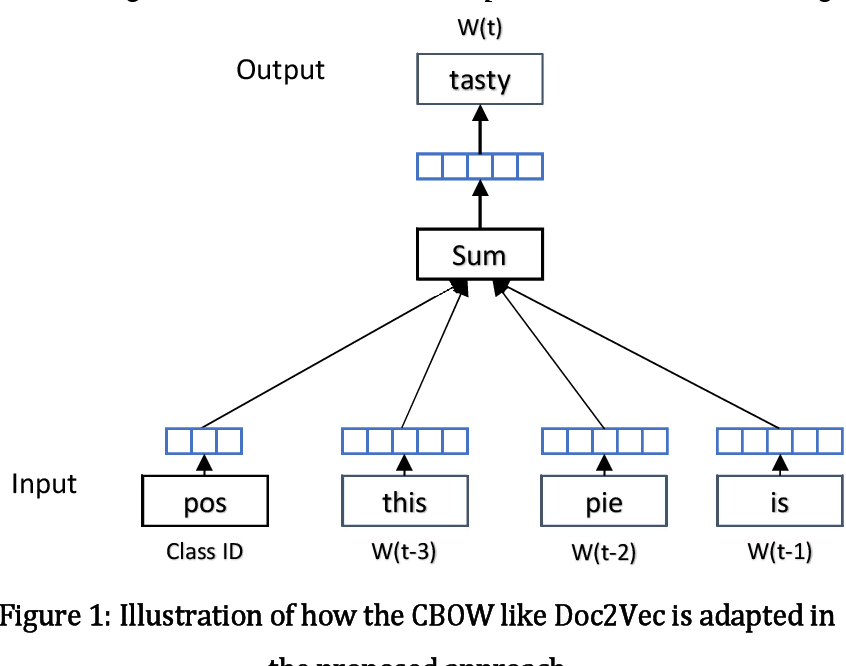 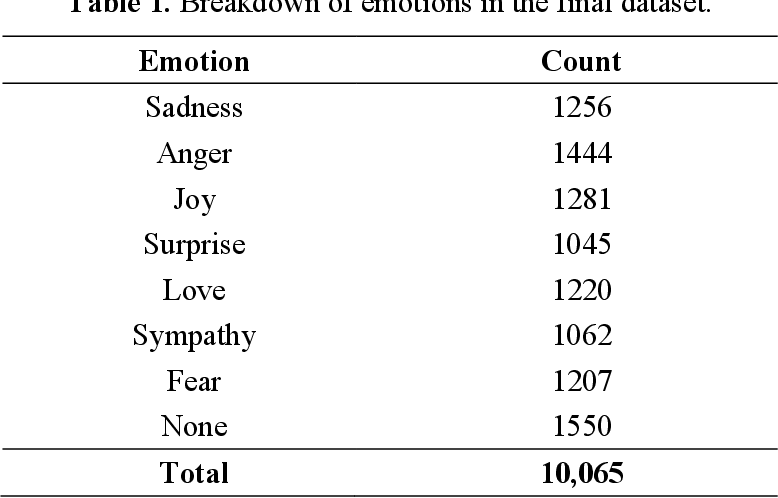 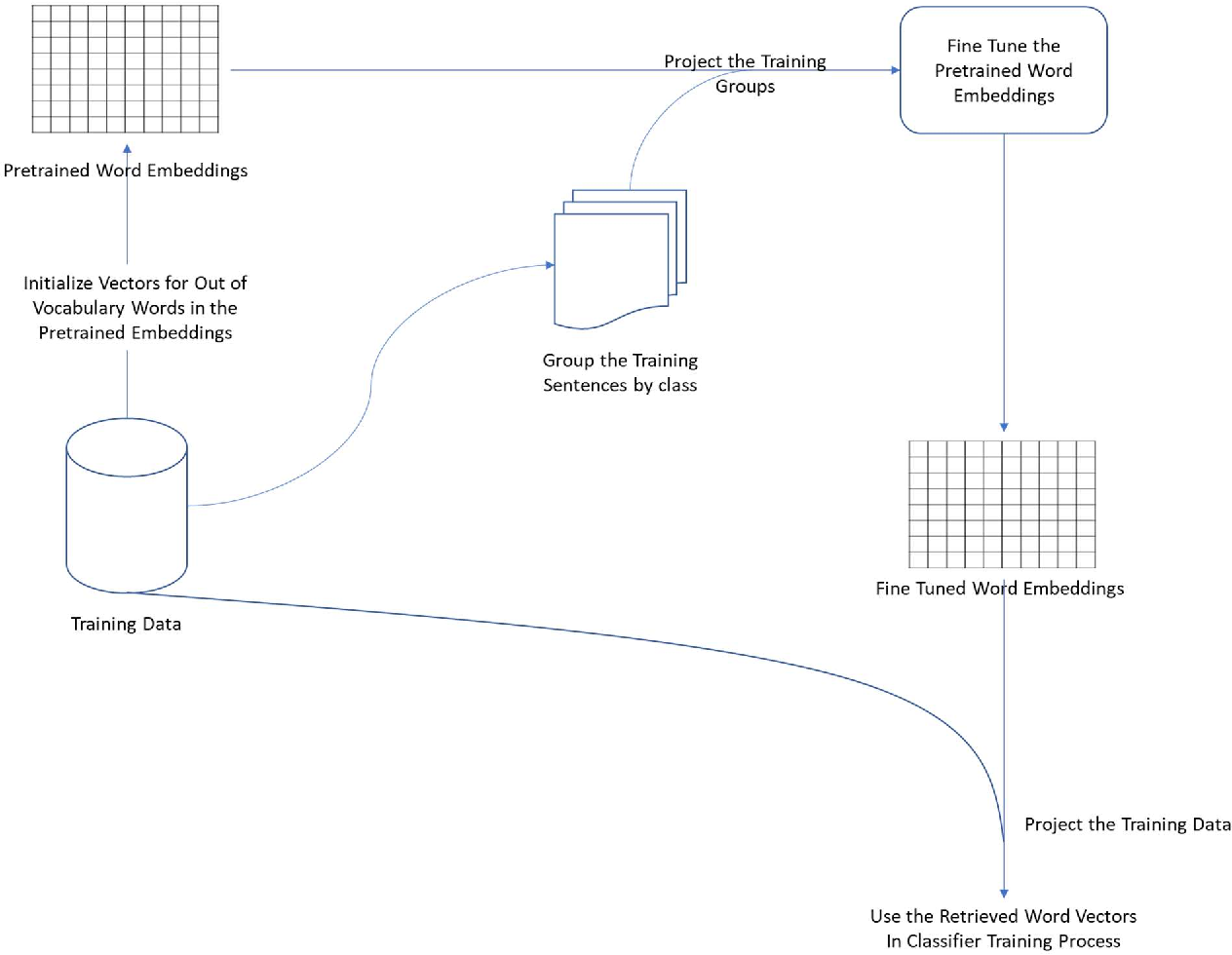 This work presents a new and simple approach for fine-tuning pretrained word embeddings for text classification tasks. In this approach, the class in which a term appears, acts as an additional contextual variable during the fine tuning process, and contributes to the final word vector for that term. As a result, words that are used distinctively within a particular class, will bear vectors that are closer to each other in the embedding space and will be more discriminative towards that class. To validate this novel approach, it was applied to three Arabic and two English datasets that have been previously used for text classification tasks such as sentiment analysis and emotion detection. In the vast majority of cases, the results obtained using the proposed approach, improved considerably.