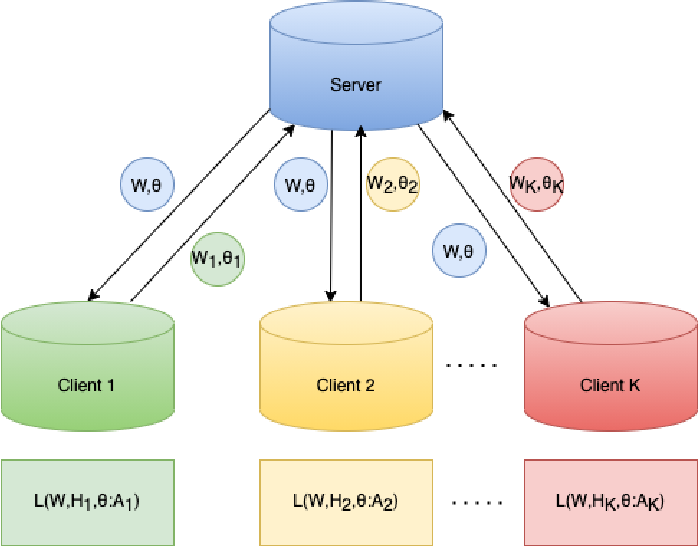 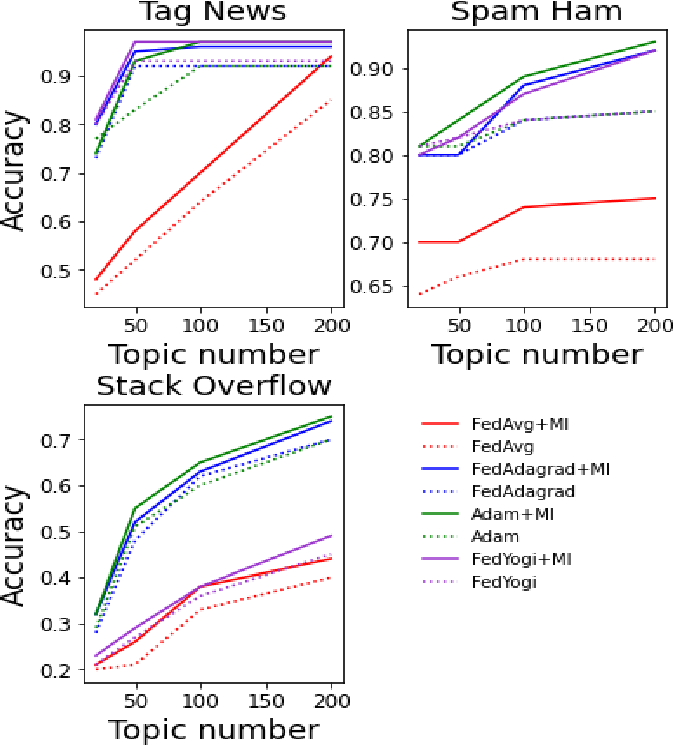 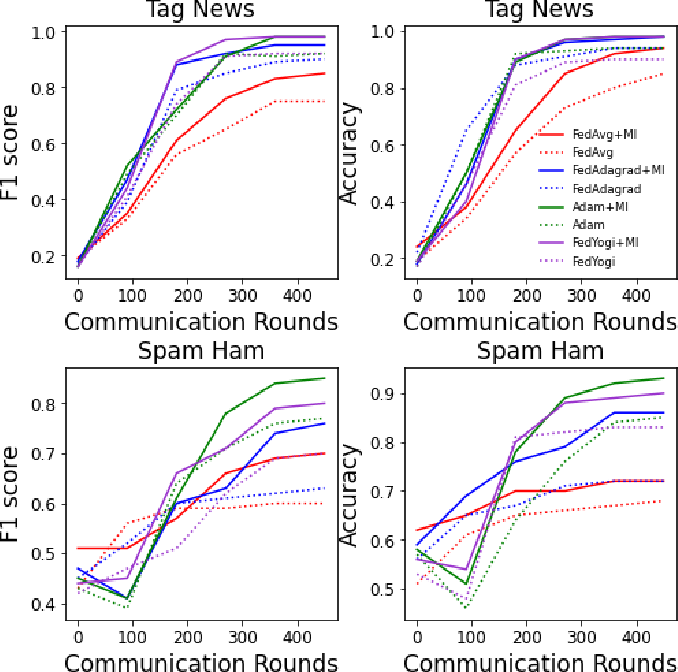 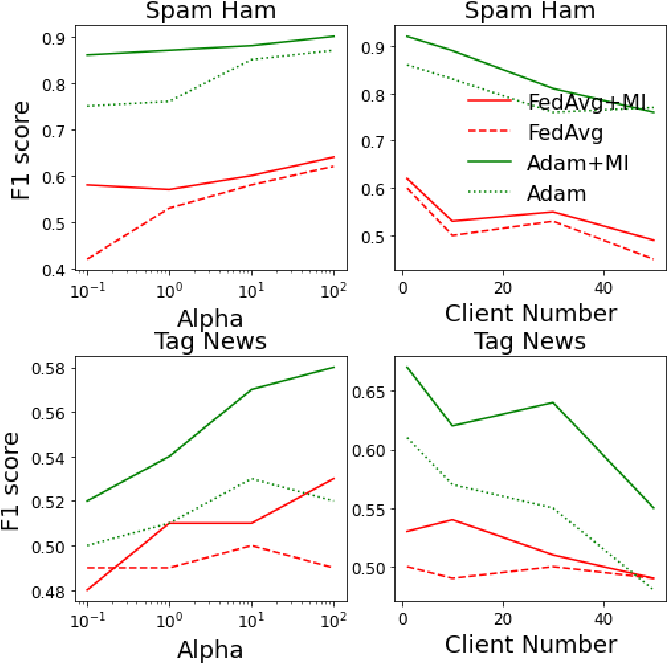 Non-negative matrix factorization (NMF) based topic modeling is widely used in natural language processing (NLP) to uncover hidden topics of short text documents. Usually, training a high-quality topic model requires large amount of textual data. In many real-world scenarios, customer textual data should be private and sensitive, precluding uploading to data centers. This paper proposes a Federated NMF (FedNMF) framework, which allows multiple clients to collaboratively train a high-quality NMF based topic model with locally stored data. However, standard federated learning will significantly undermine the performance of topic models in downstream tasks (e.g., text classification) when the data distribution over clients is heterogeneous. To alleviate this issue, we further propose FedNMF+MI, which simultaneously maximizes the mutual information (MI) between the count features of local texts and their topic weight vectors to mitigate the performance degradation. Experimental results show that our FedNMF+MI methods outperform Federated Latent Dirichlet Allocation (FedLDA) and the FedNMF without MI methods for short texts by a significant margin on both coherence score and classification F1 score. 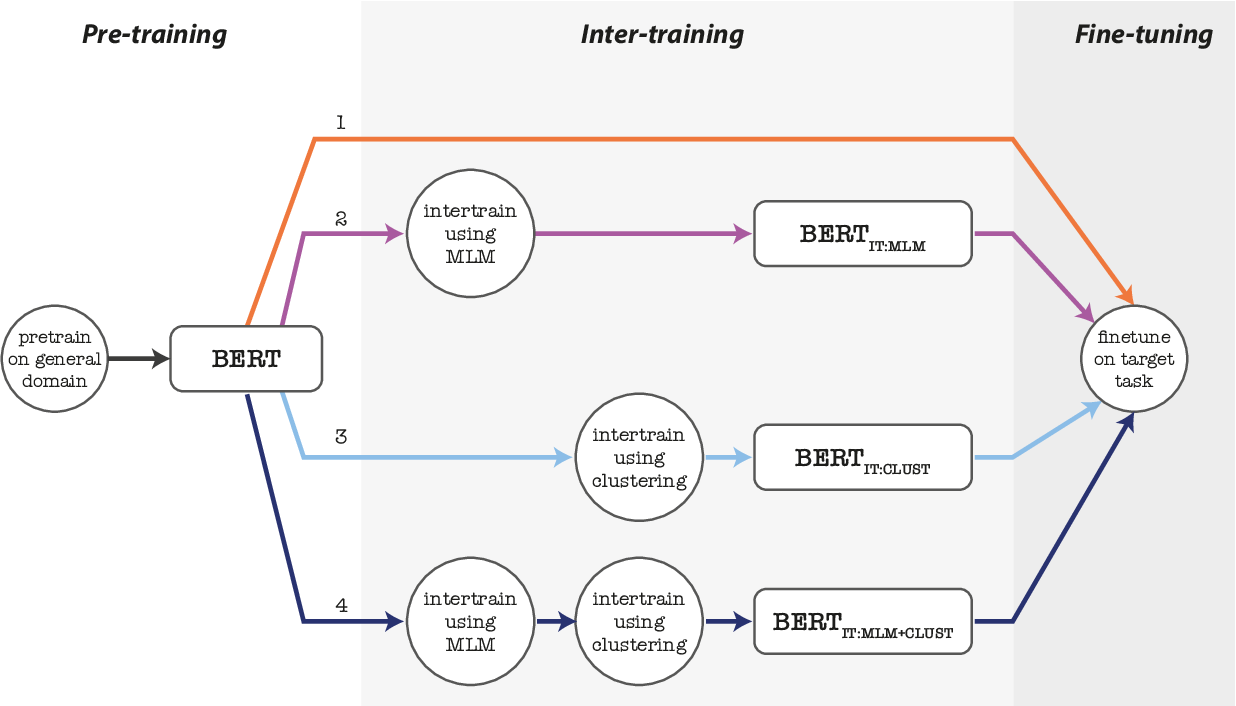 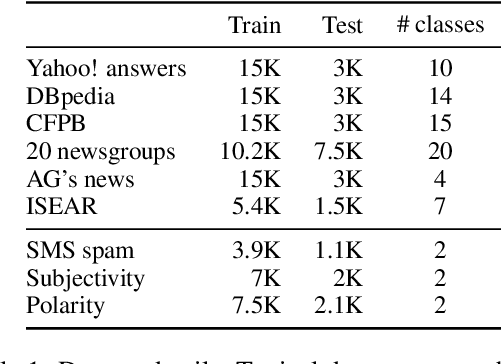 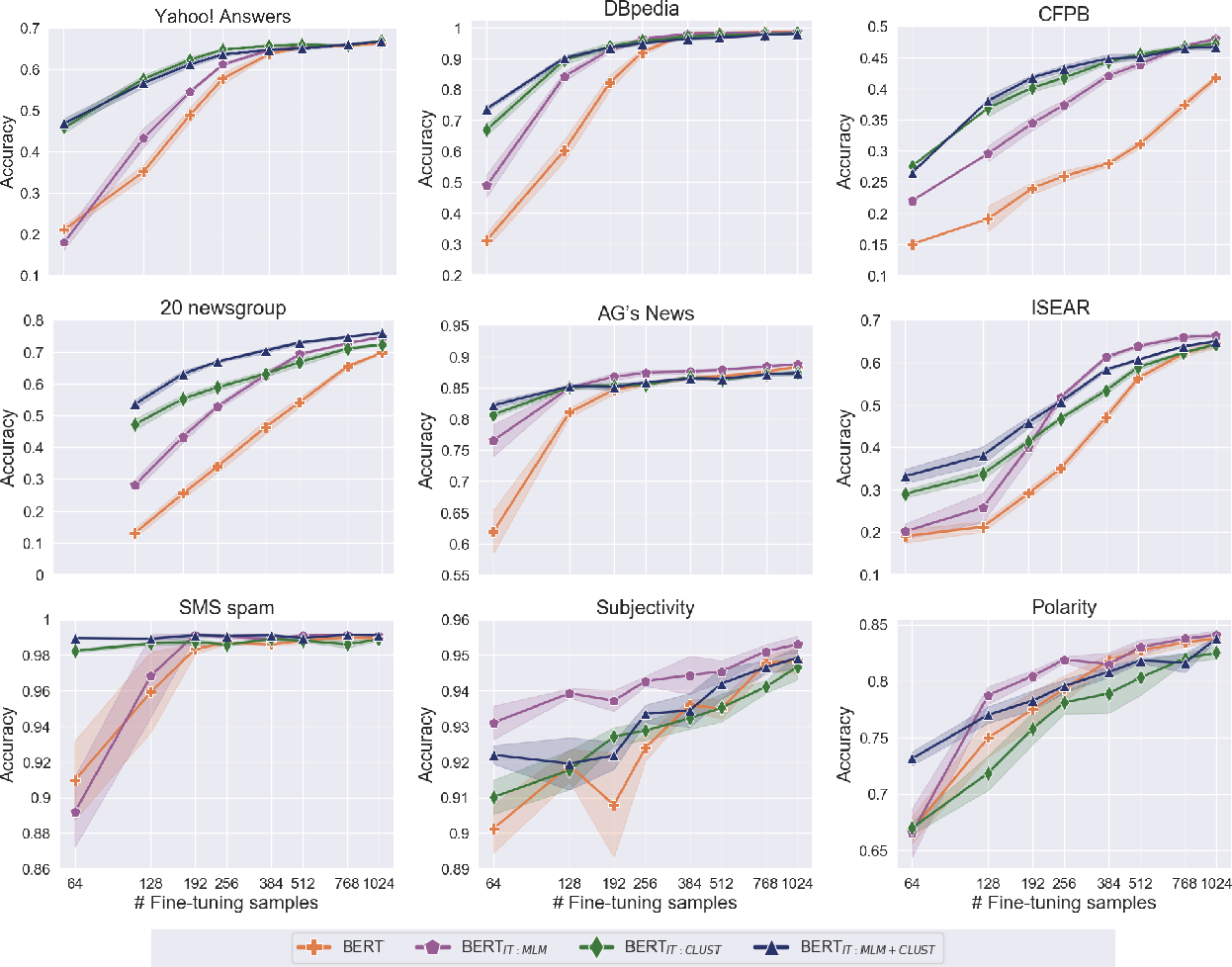 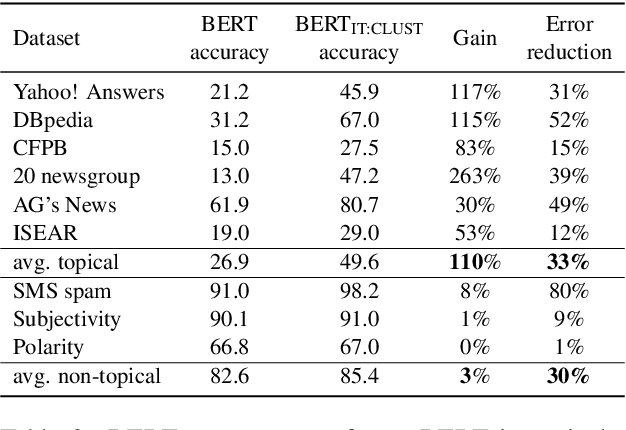 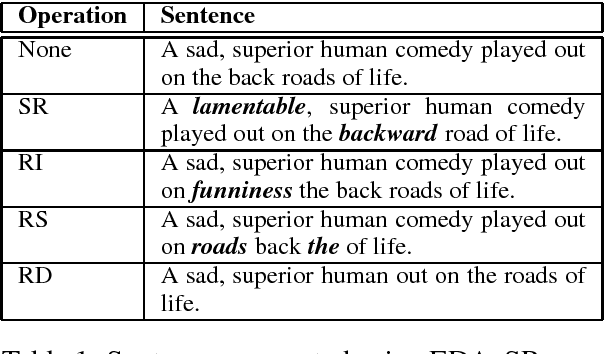 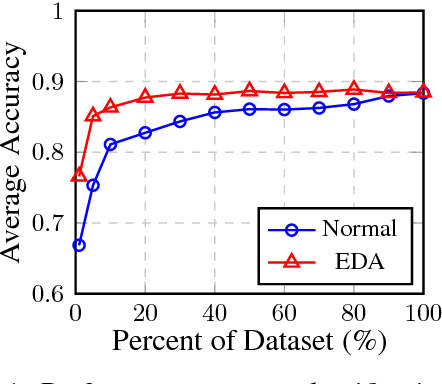 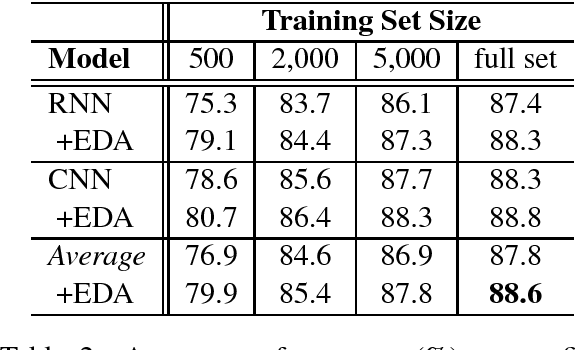 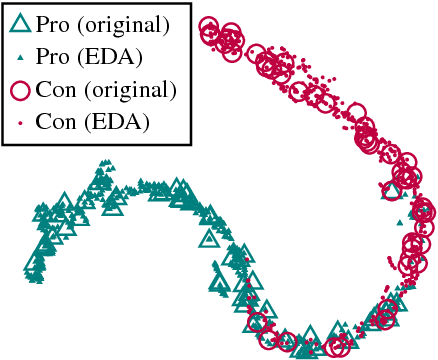 Recently, inspired by Transformer, self-attention-based scene text recognition approaches have achieved outstanding performance. However, we find that the size of model expands rapidly with the lexicon increasing. Specifically, the number of parameters for softmax classification layer and output embedding layer are proportional to the vocabulary size. It hinders the development of a lightweight text recognition model especially applied for Chinese and multiple languages. Thus, we propose a lightweight scene text recognition model named Hamming OCR. In this model, a novel Hamming classifier, which adopts locality sensitive hashing (LSH) algorithm to encode each character, is proposed to replace the softmax regression and the generated LSH code is directly employed to replace the output embedding. We also present a simplified transformer decoder to reduce the number of parameters by removing the feed-forward network and using cross-layer parameter sharing technique. Compared with traditional methods, the number of parameters in both classification and embedding layers is independent on the size of vocabulary, which significantly reduces the storage requirement without loss of accuracy. Experimental results on several datasets, including four public benchmaks and a Chinese text dataset synthesized by SynthText with more than 20,000 characters, shows that Hamming OCR achieves competitive results. 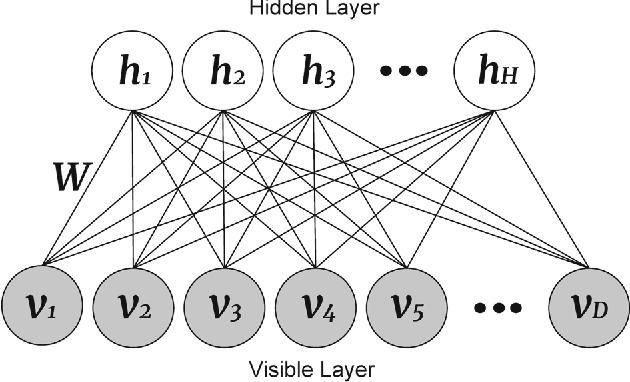 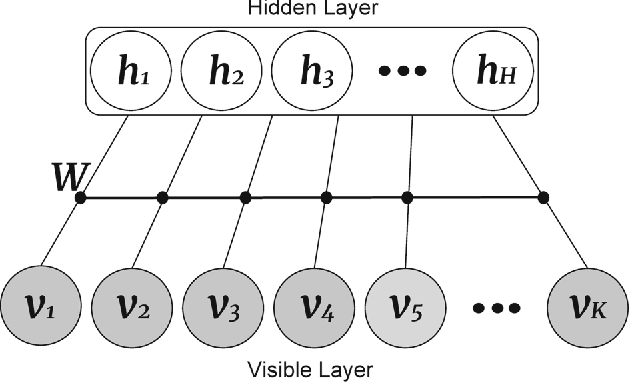 Recently by the development of the Internet and the Web, different types of social media such as web blogs become an immense source of text data. Through the processing of these data, it is possible to discover practical information about different topics, individuals opinions and a thorough understanding of the society. Therefore, applying models which can automatically extract the subjective information from the documents would be efficient and helpful. Topic modeling methods, also sentiment analysis are the most raised topics in the natural language processing and text mining fields. In this paper a new structure for joint sentiment-topic modeling based on Restricted Boltzmann Machine (RBM) which is a type of neural networks is proposed. By modifying the structure of RBM as well as appending a layer which is analogous to sentiment of text data to it, we propose a generative structure for joint sentiment topic modeling based on neutral networks. The proposed method is supervised and trained by the Contrastive Divergence algorithm. The new attached layer in the proposed model is a layer with the multinomial probability distribution which can be used in text data sentiment classification or any other supervised application. The proposed model is compared with existing models in the experiments such as evaluating as a generative model, sentiment classification, information retrieval and the corresponding results demonstrate the efficiency of the method. 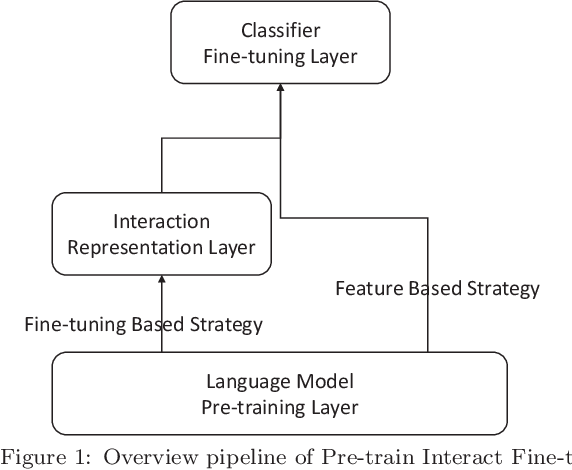 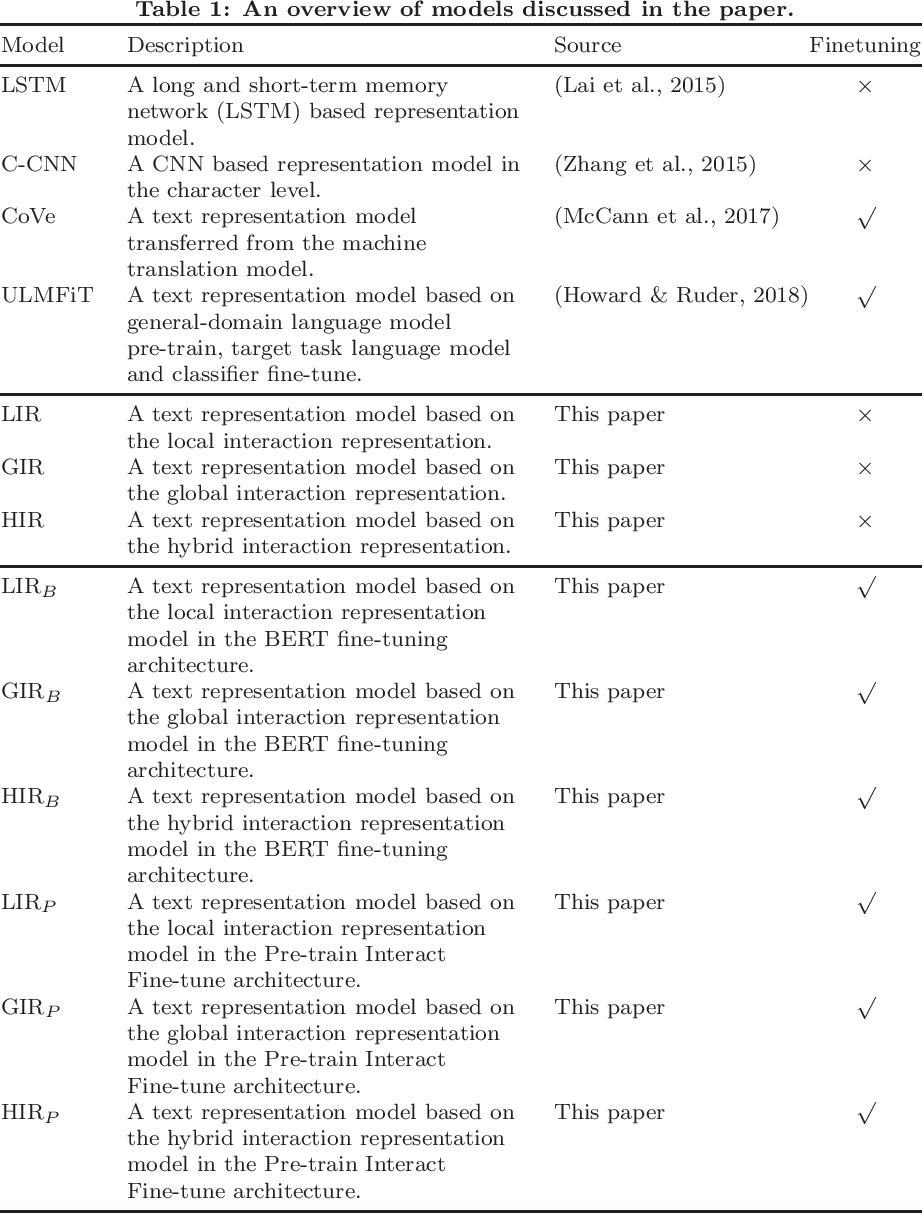 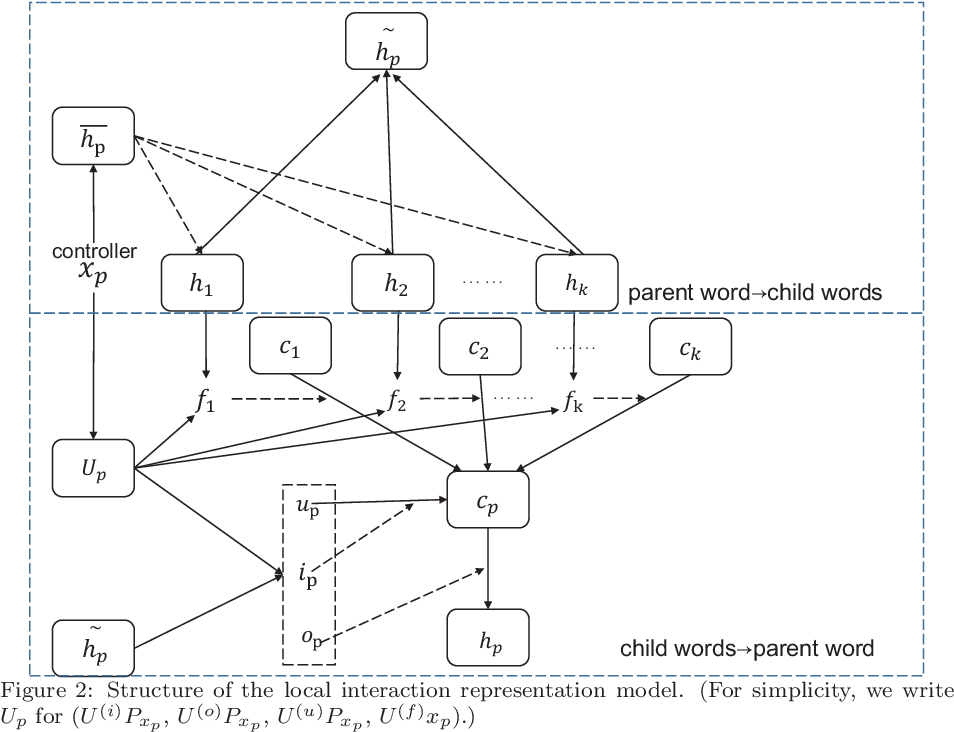 Text representation can aid machines in understanding text. Previous work on text representation often focuses on the so-called forward implication, i.e., preceding words are taken as the context of later words for creating representations, thus ignoring the fact that the semantics of a text segment is a product of the mutual implication of words in the text: later words contribute to the meaning of preceding words. We introduce the concept of interaction and propose a two-perspective interaction representation, that encapsulates a local and a global interaction representation. Here, a local interaction representation is one that interacts among words with parent-children relationships on the syntactic trees and a global interaction interpretation is one that interacts among all the words in a sentence. We combine the two interaction representations to develop a Hybrid Interaction Representation (HIR). Inspired by existing feature-based and fine-tuning-based pretrain-finetuning approaches to language models, we integrate the advantages of feature-based and fine-tuning-based methods to propose the Pre-train, Interact, Fine-tune (PIF) architecture. We evaluate our proposed models on five widely-used datasets for text classification tasks. Our ensemble method, outperforms state-of-the-art baselines with improvements ranging from 2.03% to 3.15% in terms of error rate. In addition, we find that, the improvements of PIF against most state-of-the-art methods is not affected by increasing of the length of the text.

This paper presents the impact of using quantization on the efficiency of multi-class text classification in the training process of a support vector machine (SVM). This work is focused on comparing the efficiency of SVM model trained using reduced precision with its original form. The main advantage of using quantization is decrease in computation time and in memory footprint on the dedicated hardware platform which supports low precision computation like GPU (16-bit) or FPGA (any bit-width). The paper presents the impact of a precision reduction of the SVM training process on text classification accuracy. The implementation of the CPU was performed using the OpenMP library. Additionally, the results of the implementation of the GPU using double, single and half precision are presented. 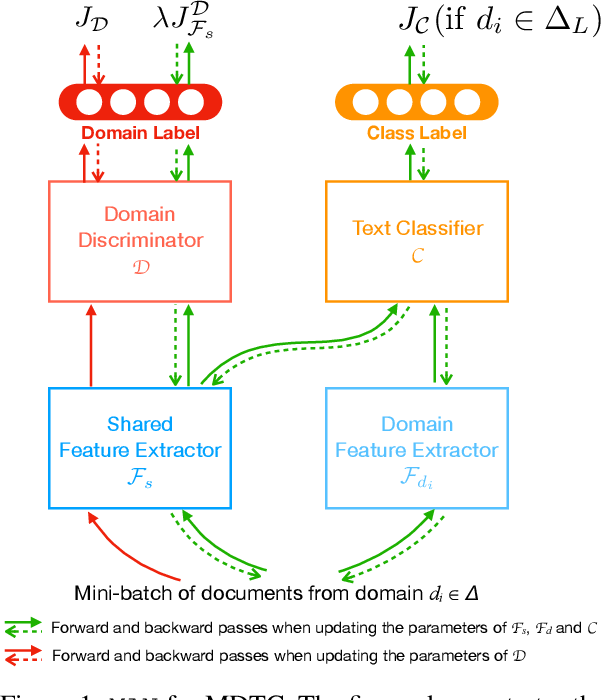 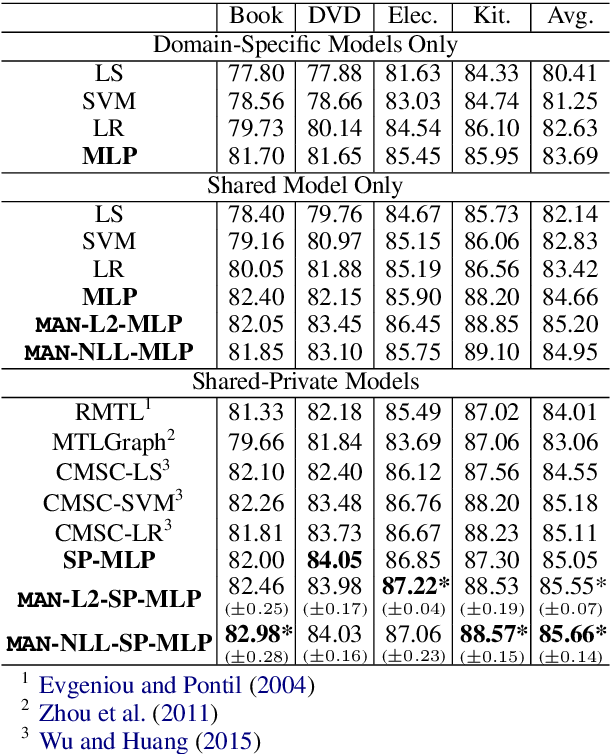 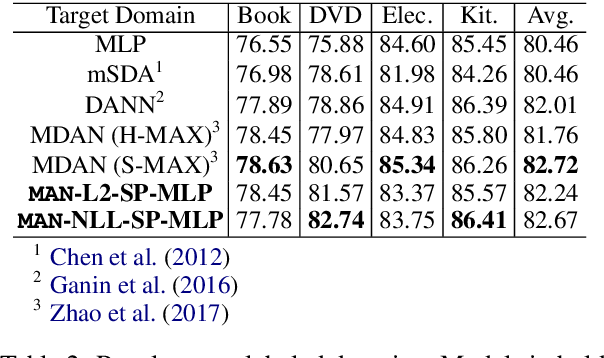 Many text classification tasks are known to be highly domain-dependent. Unfortunately, the availability of training data can vary drastically across domains. Worse still, for some domains there may not be any annotated data at all. In this work, we propose a multinomial adversarial network (MAN) to tackle the text classification problem in this real-world multidomain setting (MDTC). We provide theoretical justifications for the MAN framework, proving that different instances of MANs are essentially minimizers of various f-divergence metrics (Ali and Silvey, 1966) among multiple probability distributions. MANs are thus a theoretically sound generalization of traditional adversarial networks that discriminate over two distributions. More specifically, for the MDTC task, MAN learns features that are invariant across multiple domains by resorting to its ability to reduce the divergence among the feature distributions of each domain. We present experimental results showing that MANs significantly outperform the prior art on the MDTC task. We also show that MANs achieve state-of-the-art performance for domains with no labeled data. 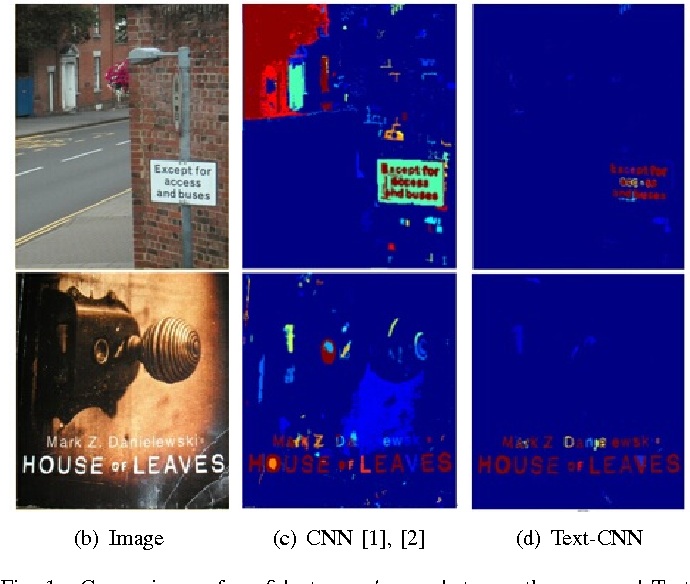 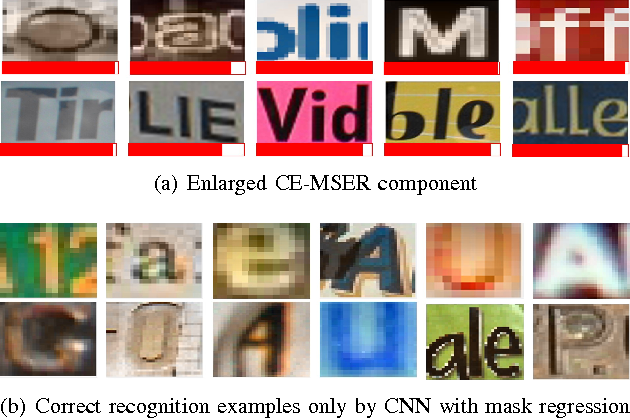 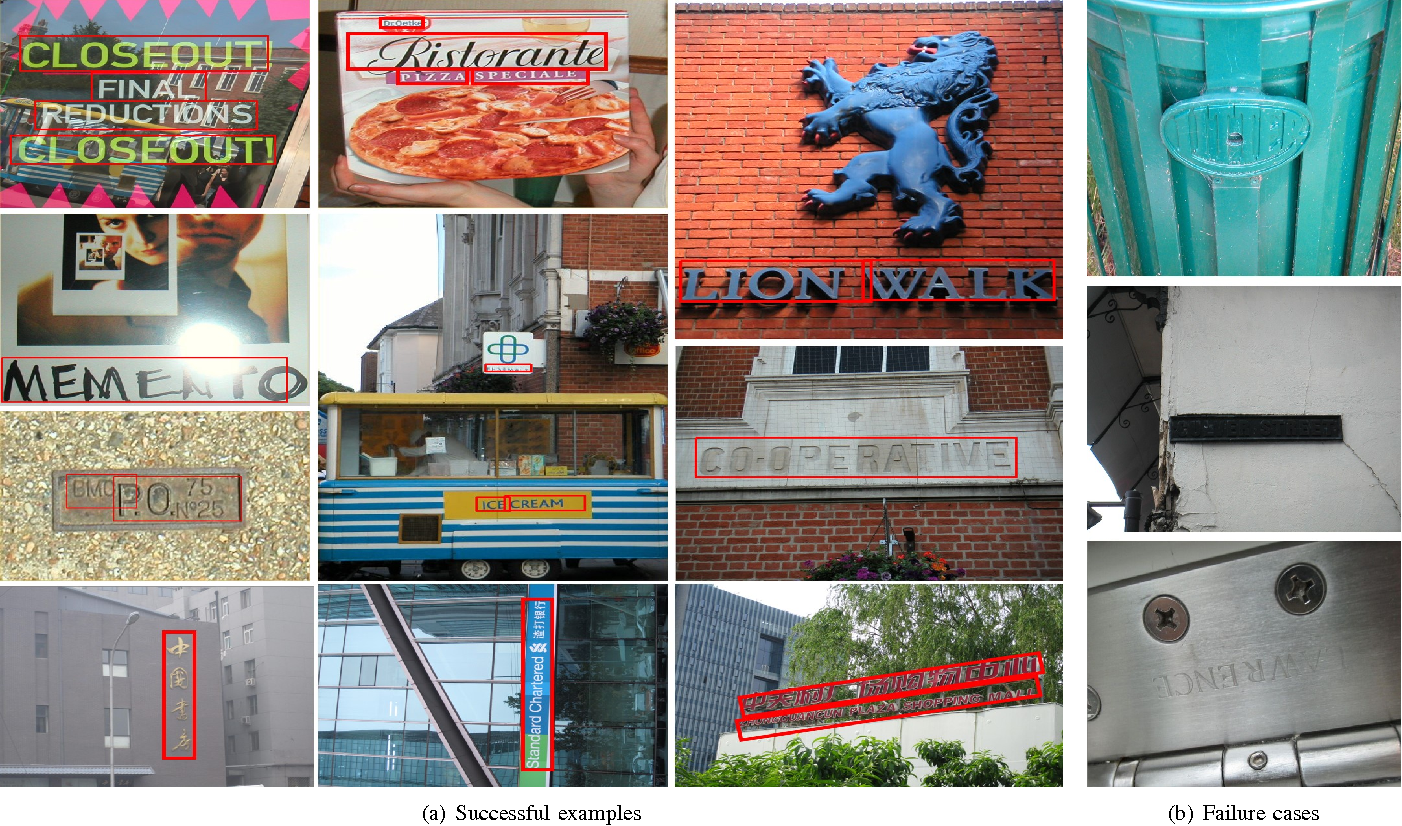 Recent deep learning models have demonstrated strong capabilities for classifying text and non-text components in natural images. They extract a high-level feature computed globally from a whole image component (patch), where the cluttered background information may dominate true text features in the deep representation. This leads to less discriminative power and poorer robustness. In this work, we present a new system for scene text detection by proposing a novel Text-Attentional Convolutional Neural Network (Text-CNN) that particularly focuses on extracting text-related regions and features from the image components. We develop a new learning mechanism to train the Text-CNN with multi-level and rich supervised information, including text region mask, character label, and binary text/nontext information. The rich supervision information enables the Text-CNN with a strong capability for discriminating ambiguous texts, and also increases its robustness against complicated background components. The training process is formulated as a multi-task learning problem, where low-level supervised information greatly facilitates main task of text/non-text classification. In addition, a powerful low-level detector called Contrast- Enhancement Maximally Stable Extremal Regions (CE-MSERs) is developed, which extends the widely-used MSERs by enhancing intensity contrast between text patterns and background. This allows it to detect highly challenging text patterns, resulting in a higher recall. Our approach achieved promising results on the ICDAR 2013 dataset, with a F-measure of 0.82, improving the state-of-the-art results substantially. 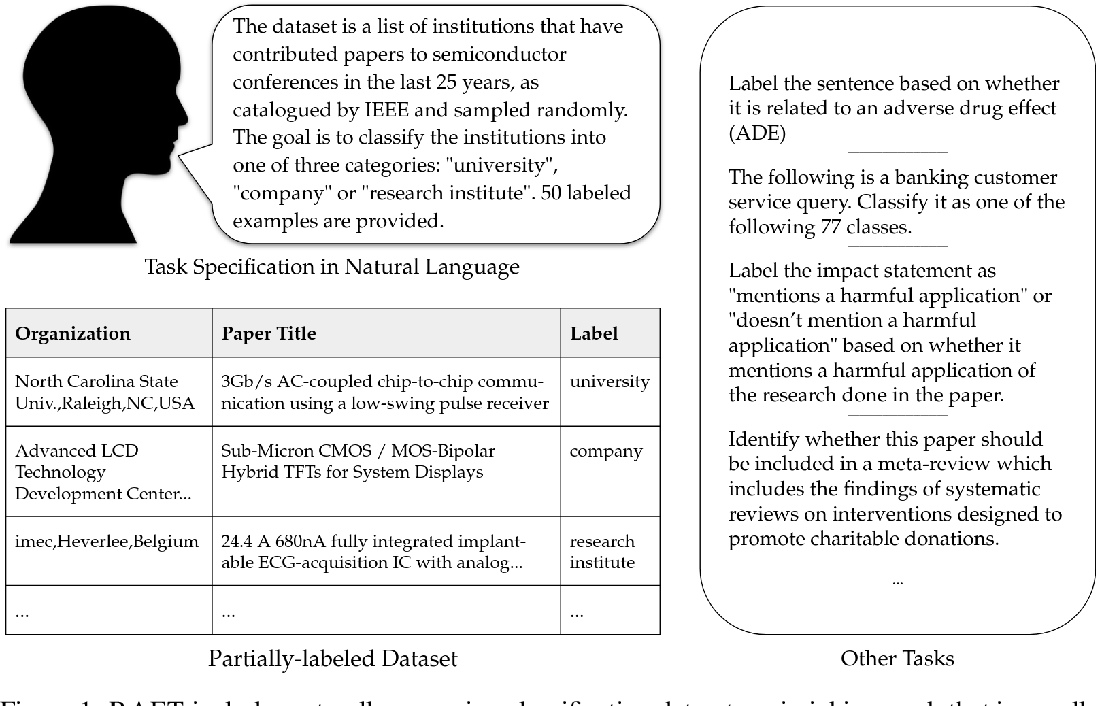 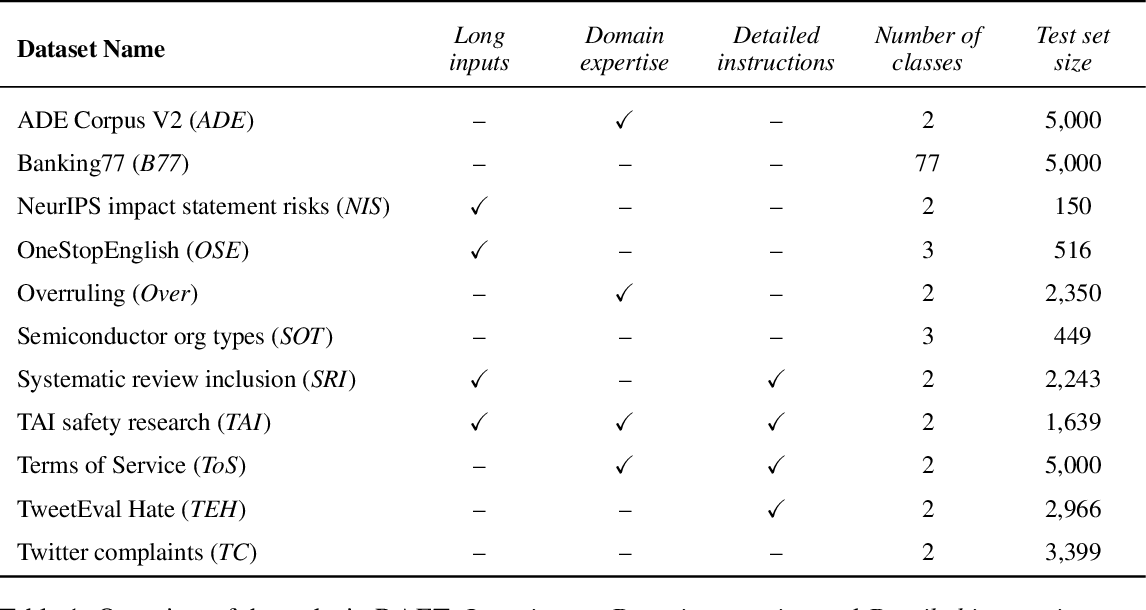 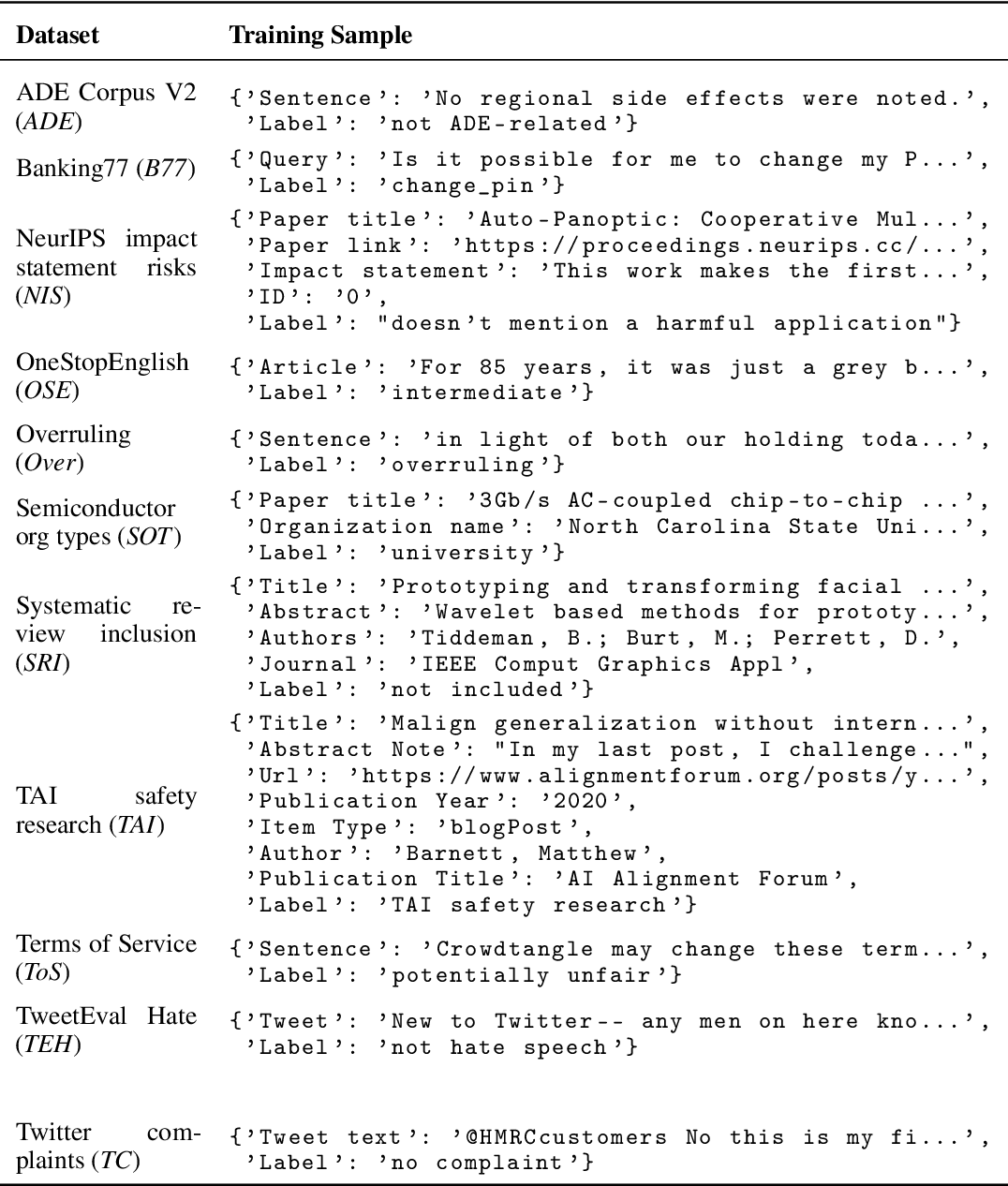 Large pre-trained language models have shown promise for few-shot learning, completing text-based tasks given only a few task-specific examples. Will models soon solve classification tasks that have so far been reserved for human research assistants? Existing benchmarks are not designed to measure progress in applied settings, and so don't directly answer this question. The RAFT benchmark (Real-world Annotated Few-shot Tasks) focuses on naturally occurring tasks and uses an evaluation setup that mirrors deployment. Baseline evaluations on RAFT reveal areas current techniques struggle with: reasoning over long texts and tasks with many classes. Human baselines show that some classification tasks are difficult for non-expert humans, reflecting that real-world value sometimes depends on domain expertise. Yet even non-expert human baseline F1 scores exceed GPT-3 by an average of 0.11. The RAFT datasets and leaderboard will track which model improvements translate into real-world benefits at https://raft.elicit.org .