Exploring large-scale pretrained foundation models is of significant interest in computer vision because these models can be quickly transferred to many downstream tasks. This paper presents Contrastive Captioner (CoCa), a minimalist design to pretrain an image-text encoder-decoder foundation model jointly with contrastive loss and captioning loss, thereby subsuming model capabilities from contrastive approaches like CLIP and generative methods like SimVLM. In contrast to standard encoder-decoder transformers where all decoder layers attend to encoder outputs, CoCa omits cross-attention in the first half of decoder layers to encode unimodal text representations, and cascades the remaining decoder layers which cross-attend to the image encoder for multimodal image-text representations. We apply a contrastive loss between unimodal image and text embeddings, in addition to a captioning loss on the multimodal decoder outputs which predicts text tokens autoregressively. By sharing the same computational graph, the two training objectives are computed efficiently with minimal overhead. CoCa is pretrained end-to-end and from scratch on both web-scale alt-text data and annotated images by treating all labels simply as text, seamlessly unifying natural language supervision for representation learning. Empirically, CoCa achieves state-of-the-art performance with zero-shot transfer or minimal task-specific adaptation on a broad range of downstream tasks, spanning visual recognition (ImageNet, Kinetics-400/600/700, Moments-in-Time), crossmodal retrieval (MSCOCO, Flickr30K, MSR-VTT), multimodal understanding (VQA, SNLI-VE, NLVR2), and image captioning (MSCOCO, NoCaps). Notably on ImageNet classification, CoCa obtains 86.3% zero-shot top-1 accuracy, 90.6% with a frozen encoder and learned classification head, and new state-of-the-art 91.0% top-1 accuracy on ImageNet with a finetuned encoder. 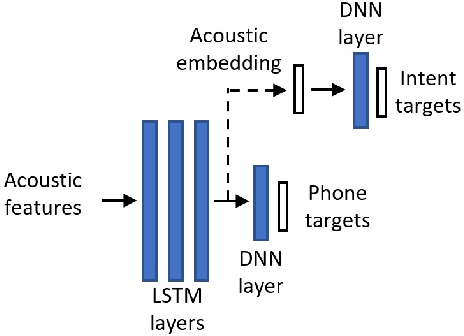 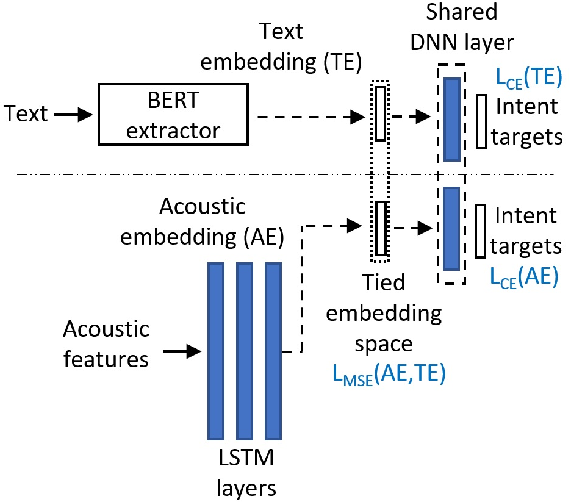 Training an end-to-end (E2E) neural network speech-to-intent (S2I) system that directly extracts intents from speech requires large amounts of intent-labeled speech data, which is time consuming and expensive to collect. Initializing the S2I model with an ASR model trained on copious speech data can alleviate data sparsity. In this paper, we attempt to leverage NLU text resources. We implemented a CTC-based S2I system that matches the performance of a state-of-the-art, traditional cascaded SLU system. We performed controlled experiments with varying amounts of speech and text training data. When only a tenth of the original data is available, intent classification accuracy degrades by 7.6% absolute. Assuming we have additional text-to-intent data (without speech) available, we investigated two techniques to improve the S2I system: (1) transfer learning, in which acoustic embeddings for intent classification are tied to fine-tuned BERT text embeddings; and (2) data augmentation, in which the text-to-intent data is converted into speech-to-intent data using a multi-speaker text-to-speech system. The proposed approaches recover 80% of performance lost due to using limited intent-labeled speech. 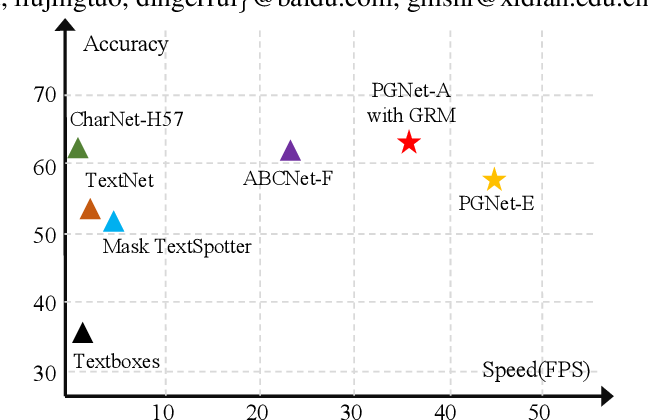 The reading of arbitrarily-shaped text has received increasing research attention. However, existing text spotters are mostly built on two-stage frameworks or character-based methods, which suffer from either Non-Maximum Suppression (NMS), Region-of-Interest (RoI) operations, or character-level annotations. In this paper, to address the above problems, we propose a novel fully convolutional Point Gathering Network (PGNet) for reading arbitrarily-shaped text in real-time. The PGNet is a single-shot text spotter, where the pixel-level character classification map is learned with proposed PG-CTC loss avoiding the usage of character-level annotations. With a PG-CTC decoder, we gather high-level character classification vectors from two-dimensional space and decode them into text symbols without NMS and RoI operations involved, which guarantees high efficiency. Additionally, reasoning the relations between each character and its neighbors, a graph refinement module (GRM) is proposed to optimize the coarse recognition and improve the end-to-end performance. Experiments prove that the proposed method achieves competitive accuracy, meanwhile significantly improving the running speed. In particular, in Total-Text, it runs at 46.7 FPS, surpassing the previous spotters with a large margin. 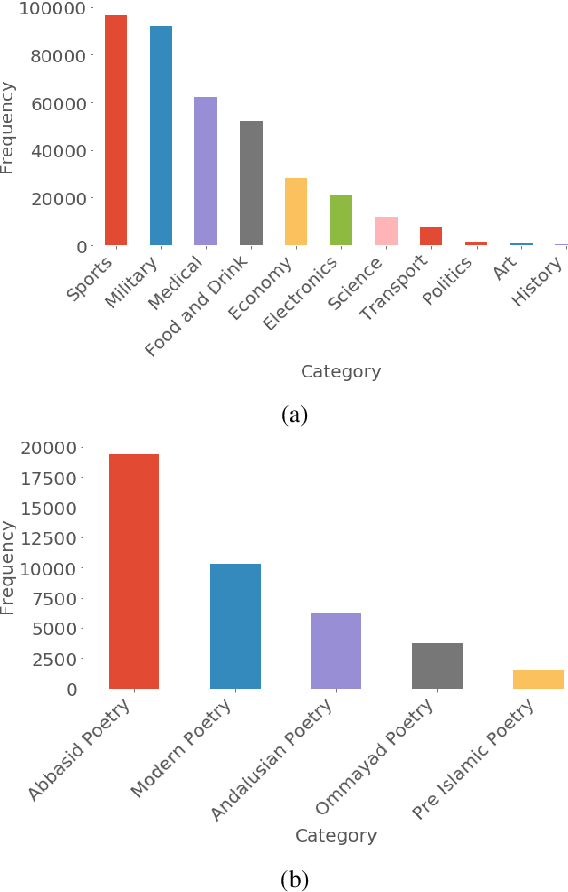 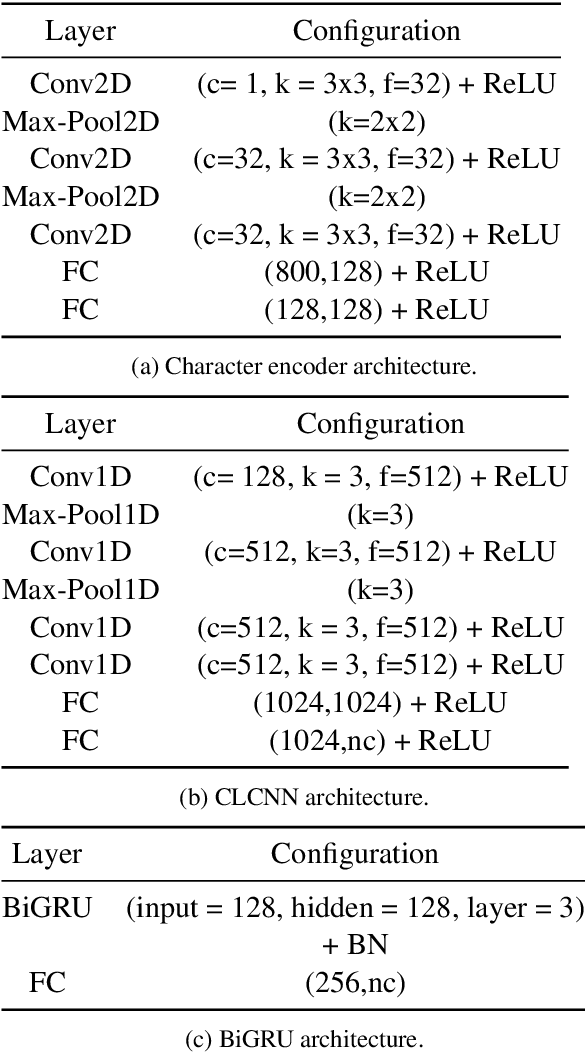 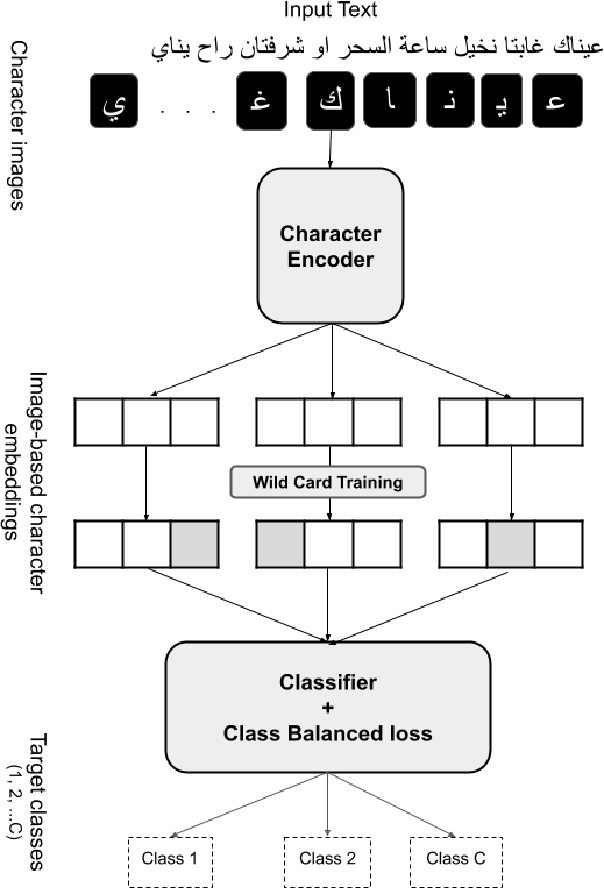 Classical and some deep learning techniques for Arabic text classification often depend on complex morphological analysis, word segmentation, and hand-crafted feature engineering. These could be eliminated by using character-level features. We propose a novel end-to-end Arabic document classification framework, Arabic document image-based classifier (AraDIC), inspired by the work on image-based character embeddings. AraDIC consists of an image-based character encoder and a classifier. They are trained in an end-to-end fashion using the class balanced loss to deal with the long-tailed data distribution problem. To evaluate the effectiveness of AraDIC, we created and published two datasets, the Arabic Wikipedia title (AWT) dataset and the Arabic poetry (AraP) dataset. To the best of our knowledge, this is the first image-based character embedding framework addressing the problem of Arabic text classification. We also present the first deep learning-based text classifier widely evaluated on modern standard Arabic, colloquial Arabic and classical Arabic. AraDIC shows performance improvement over classical and deep learning baselines by 12.29% and 23.05% for the micro and macro F-score, respectively. 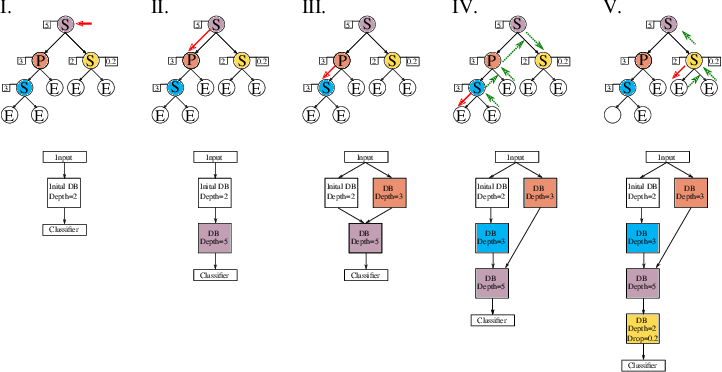 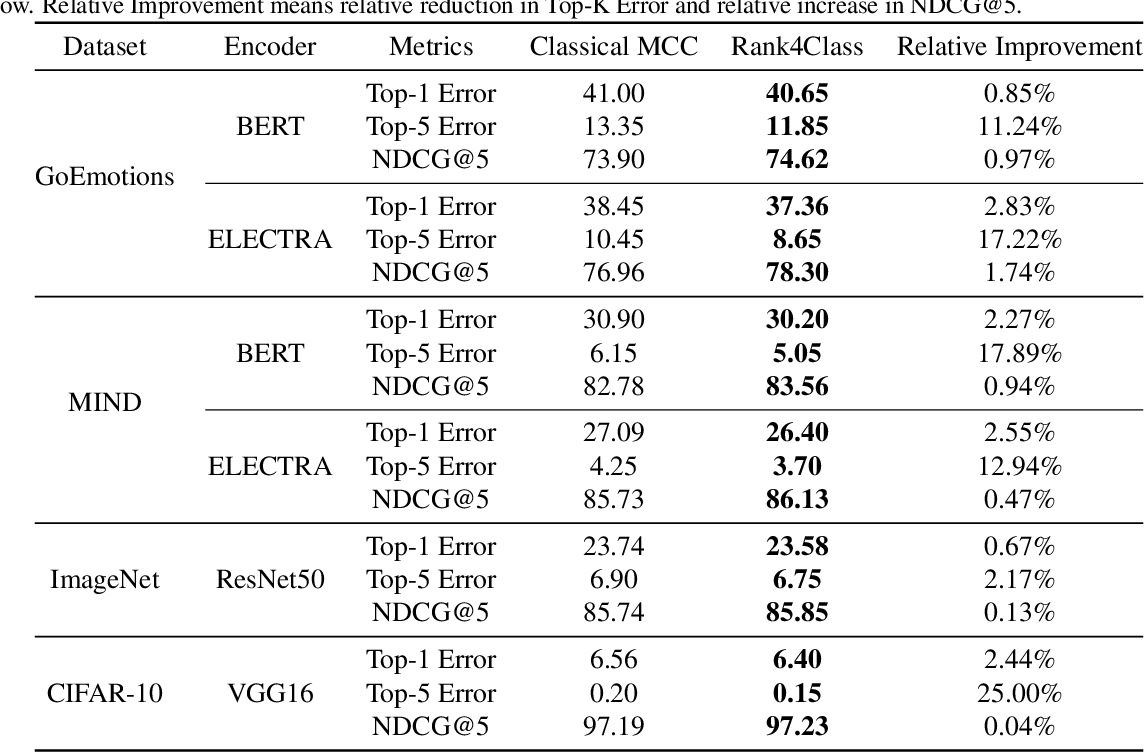 Multiclass classification (MCC) is a fundamental machine learning problem which aims to classify each instance into one of a predefined set of classes. Given an instance, a classification model computes a score for each class, all of which are then used to sort the classes. The performance of a classification model is usually measured by Top-K Accuracy/Error (e.g., K=1 or 5). In this paper, we do not aim to propose new neural representation learning models as most recent works do, but to show that it is easy to boost MCC performance with a novel formulation through the lens of ranking. In particular, by viewing MCC as to rank classes for an instance, we first argue that ranking metrics, such as Normalized Discounted Cumulative Gain (NDCG), can be more informative than existing Top-K metrics. We further demonstrate that the dominant neural MCC architecture can be formulated as a neural ranking framework with a specific set of design choices. Based on such generalization, we show that it is straightforward and intuitive to leverage techniques from the rich information retrieval literature to improve the MCC performance out of the box. Extensive empirical results on both text and image classification tasks with diverse datasets and backbone models (e.g., BERT and ResNet for text and image classification) show the value of our proposed framework.

Evaluation of Representation Models for Text Classification with AutoML Tools 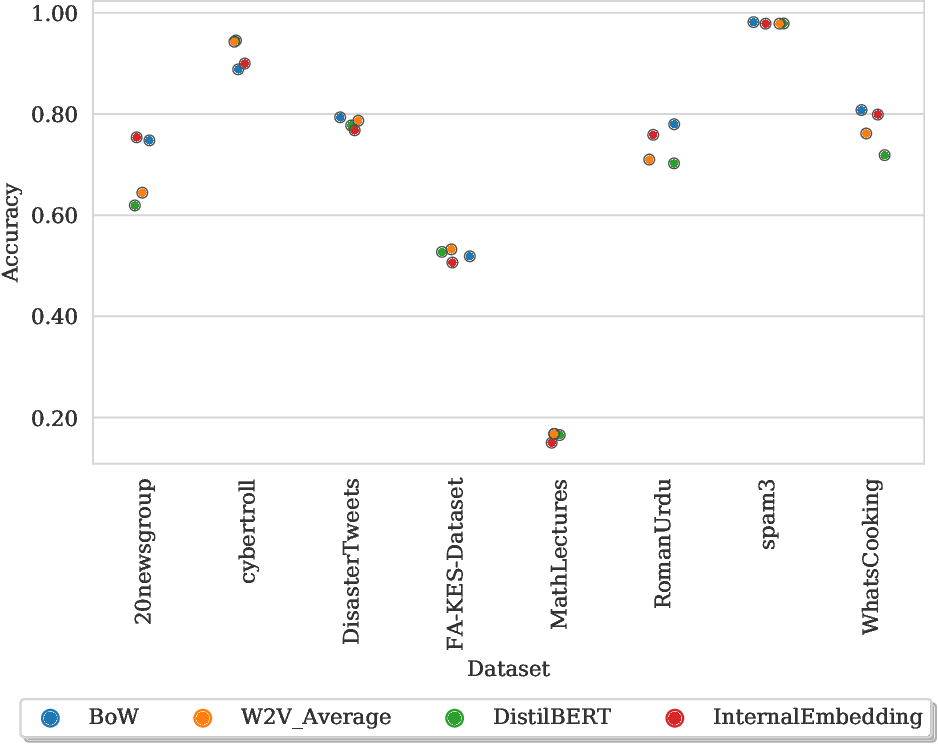 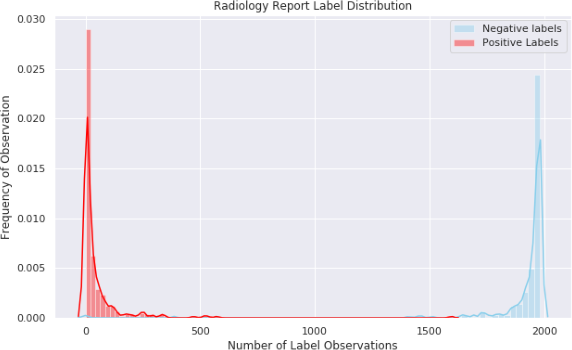 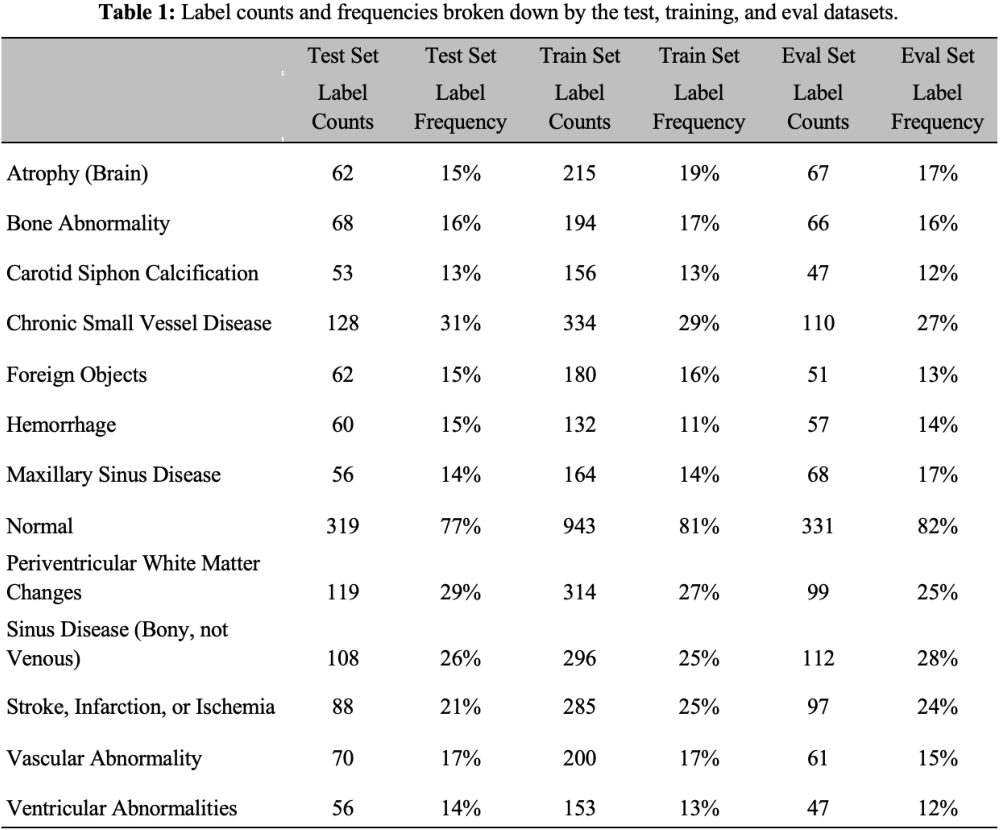 The purpose of this study is to analyze the efficacy of transfer learning techniques and transformer-based models as applied to medical natural language processing (NLP) tasks, specifically radiological text classification. We used 1,977 labeled head CT reports, from a corpus of 96,303 total reports, to evaluate the efficacy of pretraining using general domain corpora and a combined general and medical domain corpus with a bidirectional representations from transformers (BERT) model for the purpose of radiological text classification. Model performance was benchmarked to a logistic regression using bag-of-words vectorization and a long short-term memory (LSTM) multi-label multi-class classification model, and compared to the published literature in medical text classification. The BERT models using either set of pretrained checkpoints outperformed the logistic regression model, achieving sample-weighted average F1-scores of 0.87 and 0.87 for the general domain model and the combined general and biomedical-domain model. General text transfer learning may be a viable technique to generate state-of-the-art results within medical NLP tasks on radiological corpora, outperforming other deep models such as LSTMs. The efficacy of pretraining and transformer-based models could serve to facilitate the creation of groundbreaking NLP models in the uniquely challenging data environment of medical text. 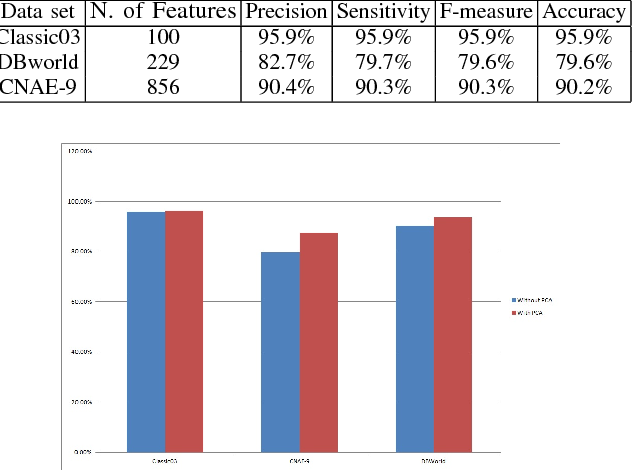 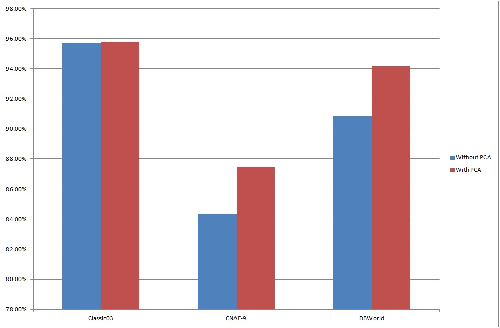 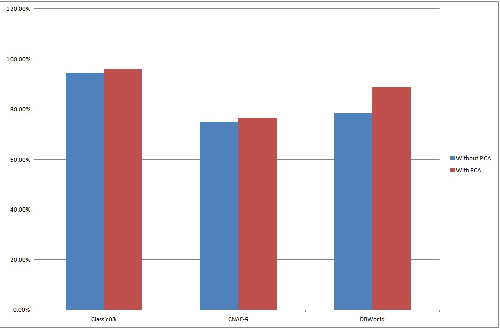 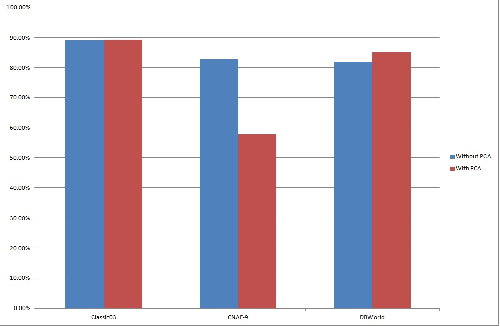 Text categorization (TC) is the task of automatically organizing a set of documents into a set of pre-defined categories. Over the last few years, increased attention has been paid to the use of documents in digital form and this makes text categorization becomes a challenging issue. The most significant problem of text categorization is its huge number of features. Most of these features are redundant, noisy and irrelevant that cause over fitting with most of the classifiers. Hence, feature extraction is an important step to improve the overall accuracy and the performance of the text classifiers. In this paper, we will provide an overview of using principle component analysis (PCA) as a feature extraction with various classifiers. It was observed that the performance rate of the classifiers after using PCA to reduce the dimension of data improved. Experiments are conducted on three UCI data sets, Classic03, CNAE-9 and DBWorld e-mails. We compare the classification performance results of using PCA with popular and well-known text classifiers. Results show that using PCA encouragingly enhances classification performance on most of the classifiers.