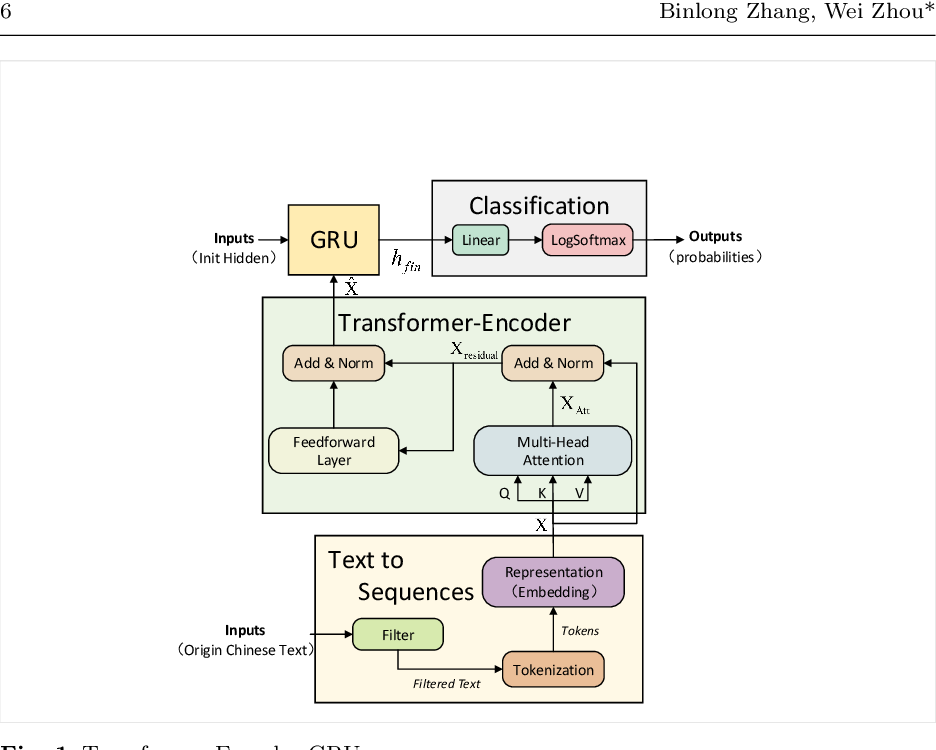 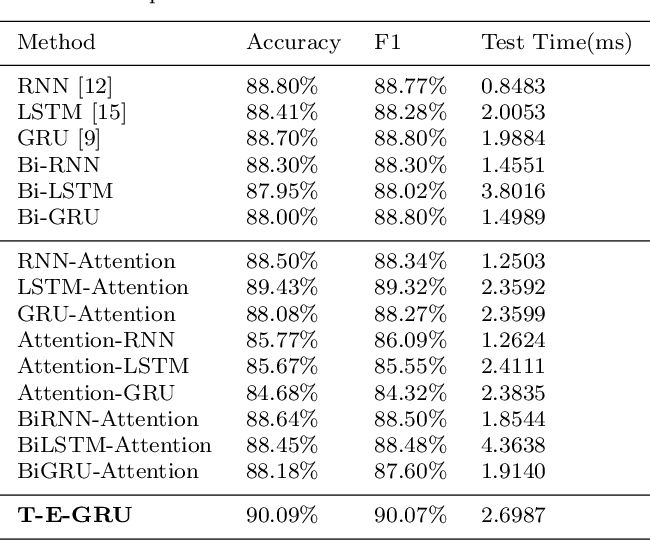 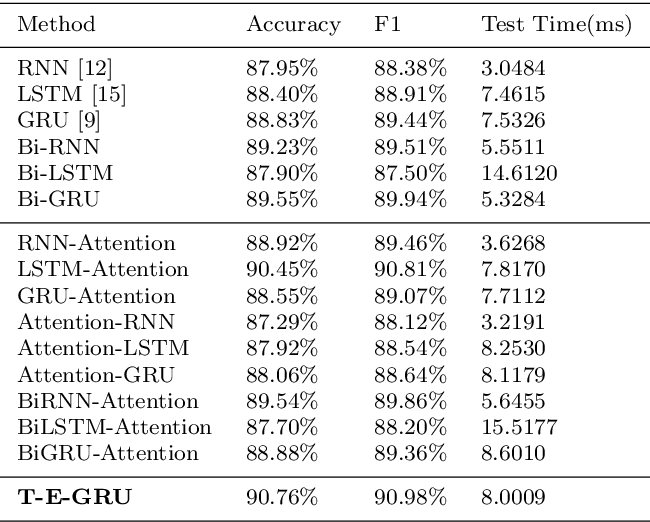 Chinese sentiment analysis (CSA) has always been one of the challenges in natural language processing due to its complexity and uncertainty. Transformer has succeeded in capturing semantic features, but it uses position encoding to capture sequence features, which has great shortcomings compared with the recurrent model. In this paper, we propose T-E-GRU for Chinese sentiment analysis, which combine transformer encoder and GRU. We conducted experiments on three Chinese comment datasets. In view of the confusion of punctuation marks in Chinese comment texts, we selectively retain some punctuation marks with sentence segmentation ability. The experimental results show that T-E-GRU outperforms classic recurrent model and recurrent model with attention. 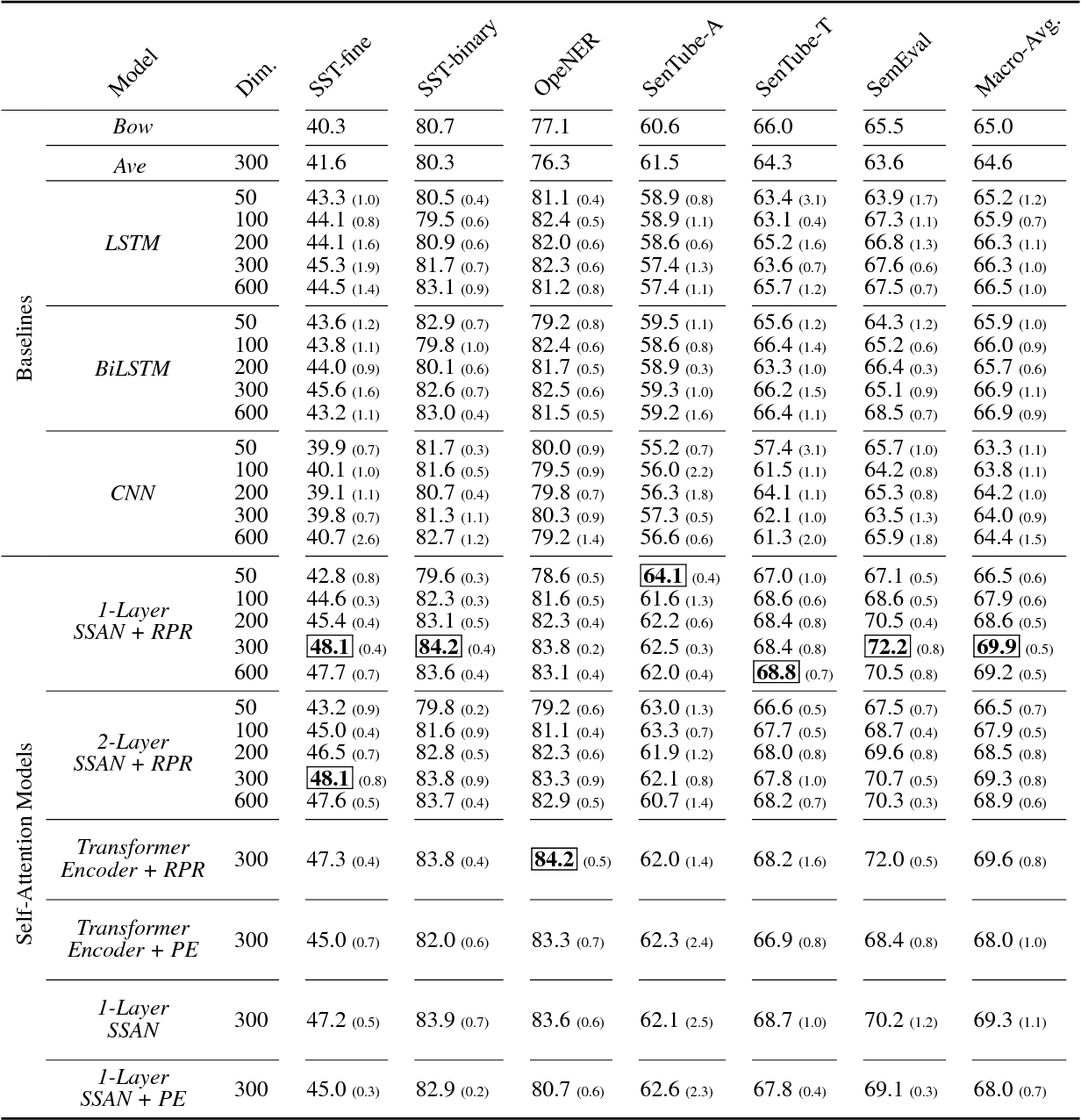 Sentiment Analysis has seen much progress in the past two decades. For the past few years, neural network approaches, primarily RNNs and CNNs, have been the most successful for this task. Recently, a new category of neural networks, self-attention networks (SANs), have been created which utilizes the attention mechanism as the basic building block. Self-attention networks have been shown to be effective for sequence modeling tasks, while having no recurrence or convolutions. In this work we explore the effectiveness of the SANs for sentiment analysis. We demonstrate that SANs are superior in performance to their RNN and CNN counterparts by comparing their classification accuracy on six datasets as well as their model characteristics such as training speed and memory consumption. Finally, we explore the effects of various SAN modifications such as multi-head attention as well as two methods of incorporating sequence position information into SANs. 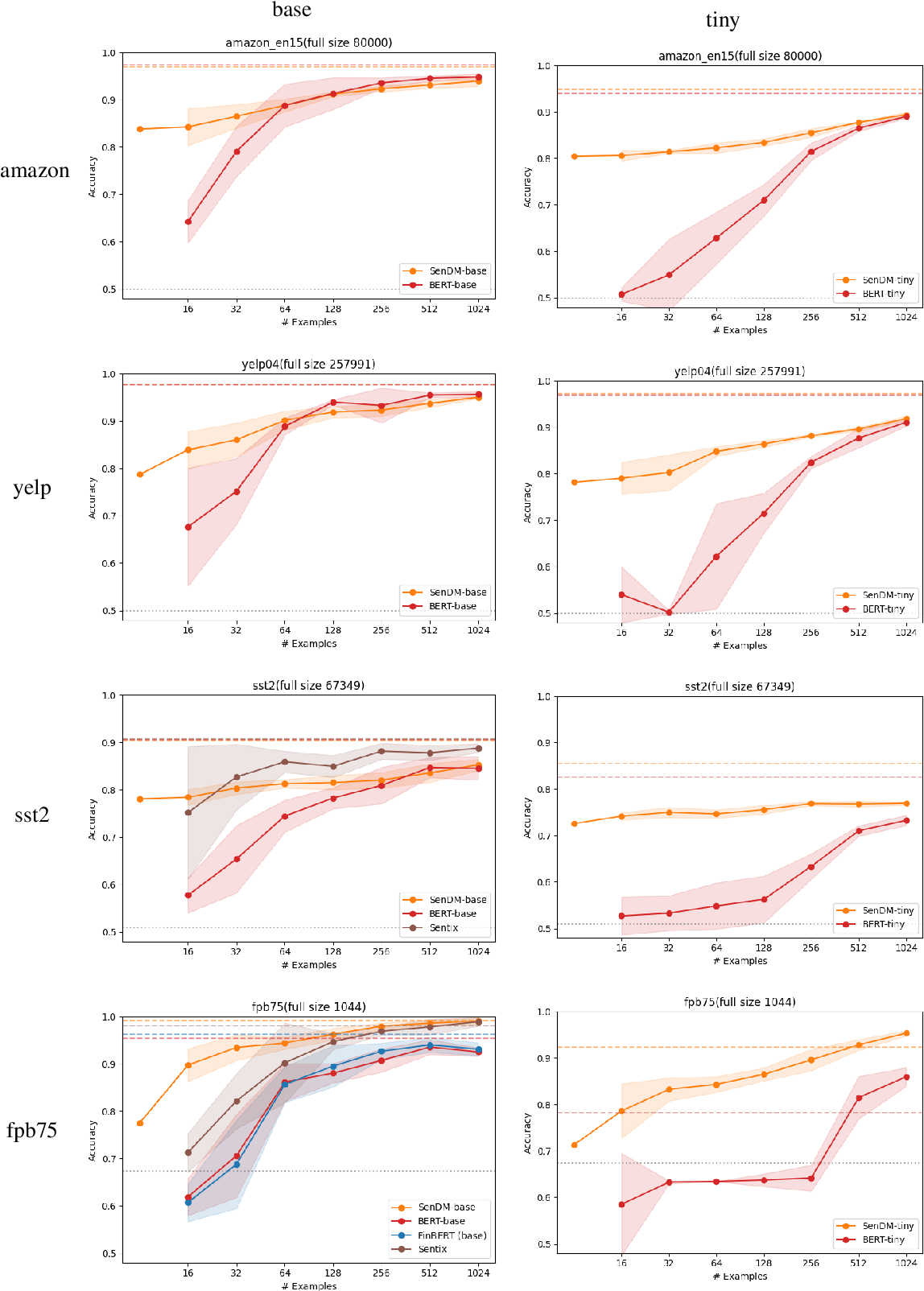 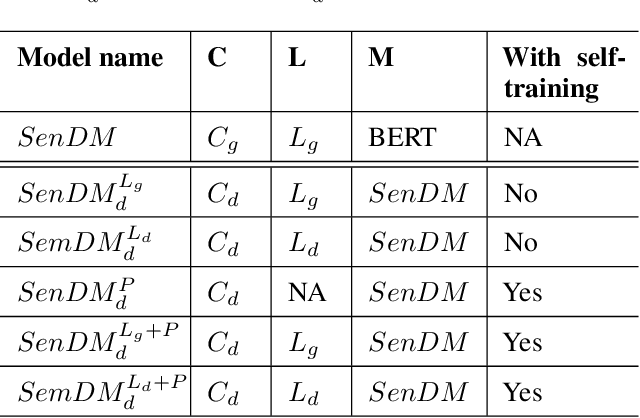 In recent years, pretrained language models have revolutionized the NLP world, while achieving state of the art performance in various downstream tasks. However, in many cases, these models do not perform well when labeled data is scarce and the model is expected to perform in the zero or few shot setting. Recently, several works have shown that continual pretraining or performing a second phase of pretraining (inter-training) which is better aligned with the downstream task, can lead to improved results, especially in the scarce data setting. Here, we propose to leverage sentiment-carrying discourse markers to generate large-scale weakly-labeled data, which in turn can be used to adapt language models for sentiment analysis. Extensive experimental results show the value of our approach on various benchmark datasets, including the finance domain. Code, models and data are available at https://github.com/ibm/tslm-discourse-markers. 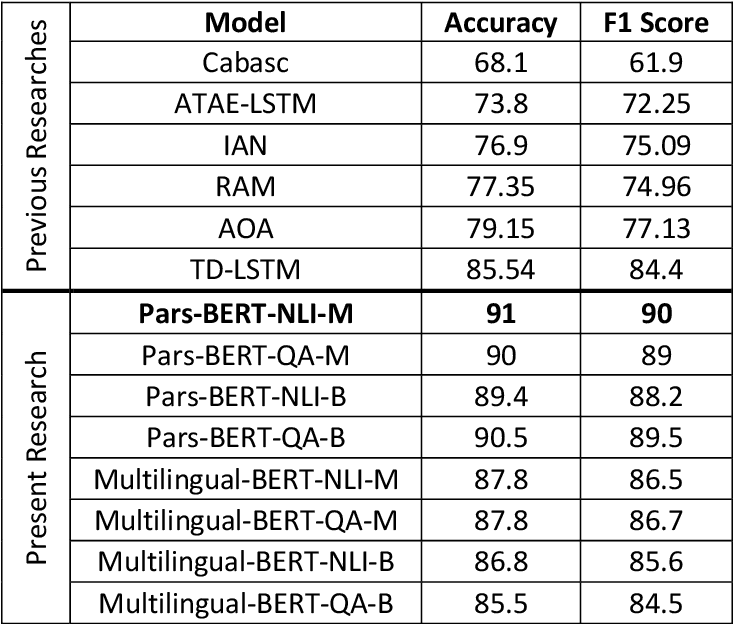 Aspect-based sentiment analysis (ABSA) is a more detailed task in sentiment analysis, by identifying opinion polarity toward a certain aspect in a text. This method is attracting more attention from the community, due to the fact that it provides more thorough and useful information. However, there are few language-specific researches on Persian language. The present research aims to improve the ABSA on the Persian Pars-ABSA dataset. This research shows the potential of using pre-trained BERT model and taking advantage of using sentence-pair input on an ABSA task. The results indicate that employing Pars-BERT pre-trained model along with natural language inference auxiliary sentence (NLI-M) could boost the ABSA task accuracy up to 91% which is 5.5% (absolute) higher than state-of-the-art studies on Pars-ABSA dataset. 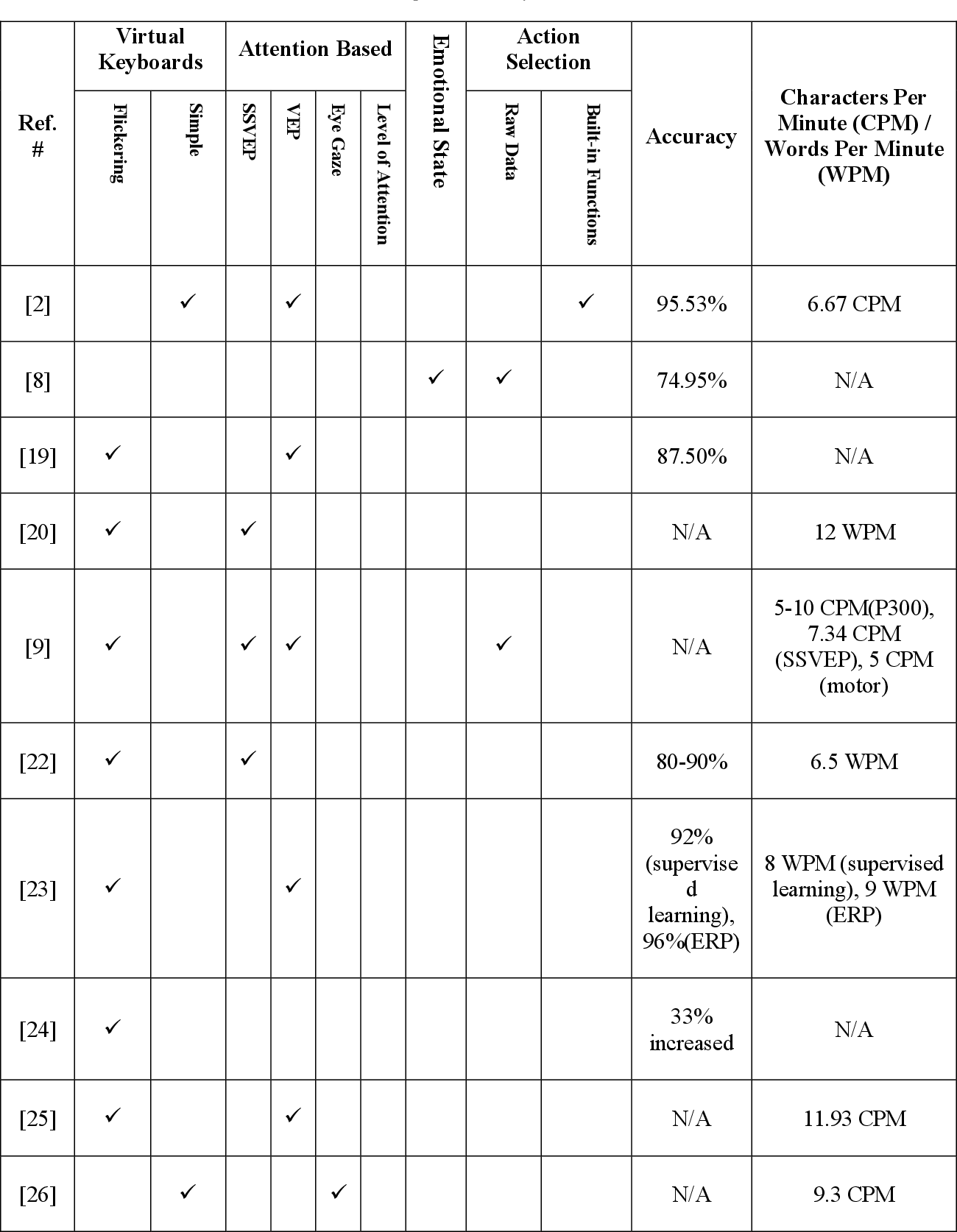 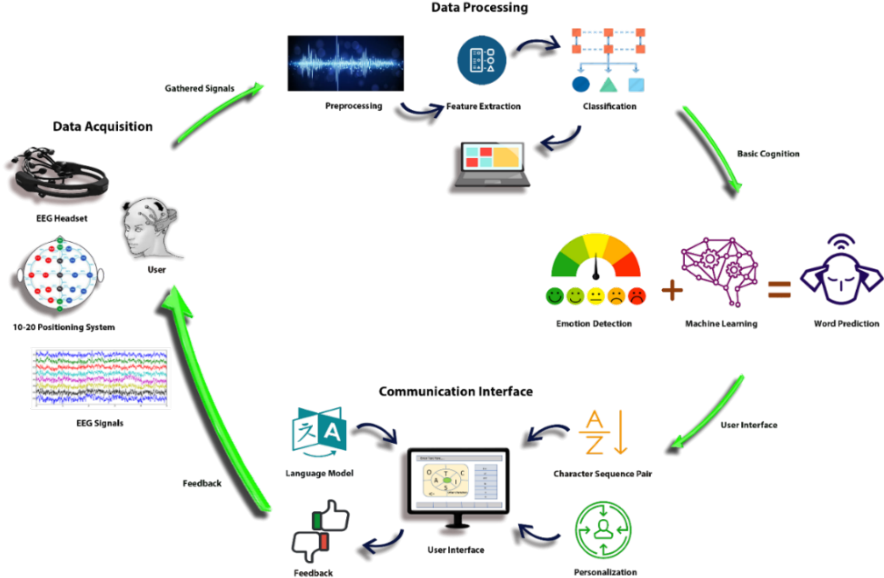 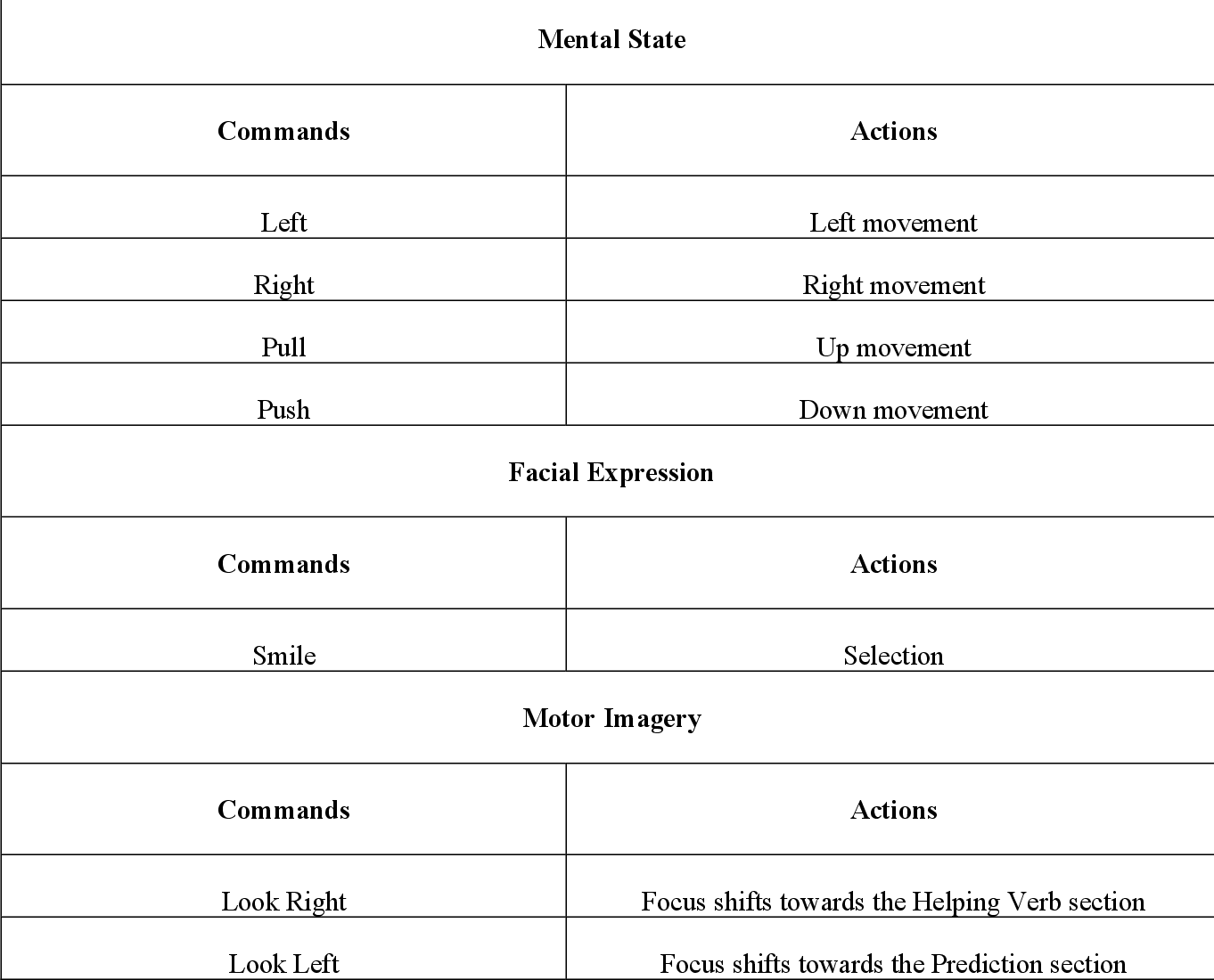 Brain Computer Interface (BCI) helps in processing and extraction of useful information from the acquired brain signals having applications in diverse fields such as military, medicine, neuroscience, and rehabilitation. BCI has been used to support paralytic patients having speech impediments with severe disabilities. To help paralytic patients communicate with ease, BCI based systems convert silent speech (thoughts) to text. However, these systems have an inconvenient graphical user interface, high latency, limited typing speed, and low accuracy rate. Apart from these limitations, the existing systems do not incorporate the inevitable factor of a patient's emotional states and sentiment analysis. The proposed system EmoWrite implements a dynamic keyboard with contextualized appearance of characters reducing the traversal time and improving the utilization of the screen space. The proposed system has been evaluated and compared with the existing systems for accuracy, convenience, sentimental analysis, and typing speed. This system results in 6.58 Words Per Minute (WPM) and 31.92 Characters Per Minute (CPM) with an accuracy of 90.36 percent. EmoWrite also gives remarkable results when it comes to the integration of emotional states. Its Information Transfer Rate (ITR) is also high as compared to other systems i.e., 87.55 bits per min with commands and 72.52 bits per min for letters. Furthermore, it provides easy to use interface with a latency of 2.685 sec. 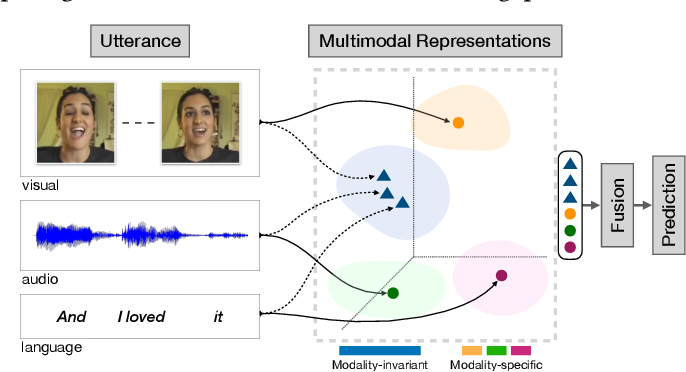 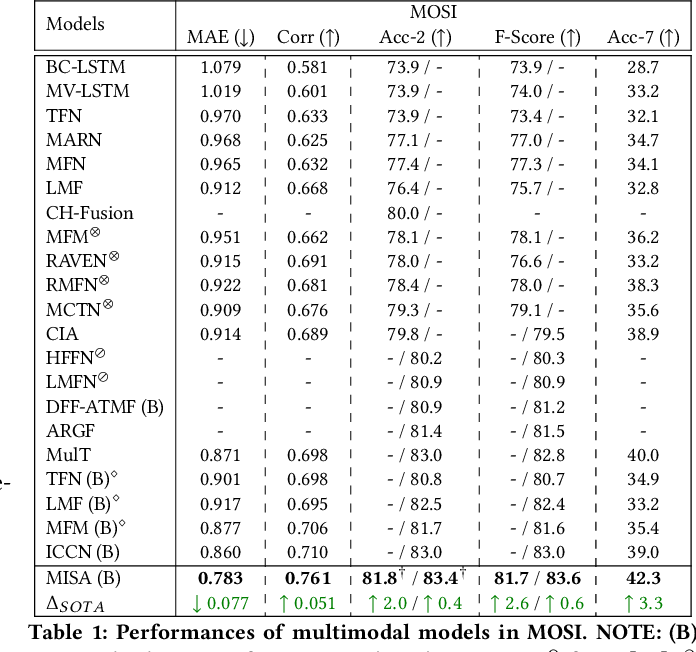 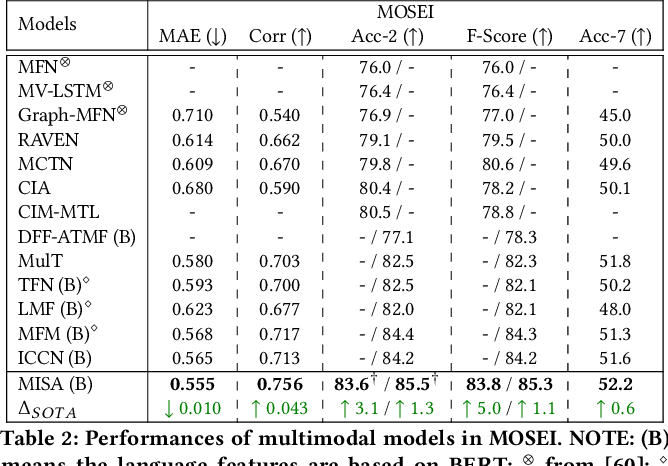 Multimodal Sentiment Analysis is an active area of research that leverages multimodal signals for affective understanding of user-generated videos. The predominant approach, addressing this task, has been to develop sophisticated fusion techniques. However, the heterogeneous nature of the signals creates distributional modality gaps that pose significant challenges. In this paper, we aim to learn effective modality representations to aid the process of fusion. We propose a novel framework, MISA, which projects each modality to two distinct subspaces. The first subspace is modality invariant, where the representations across modalities learn their commonalities and reduce the modality gap. The second subspace is modality-specific, which is private to each modality and captures their characteristic features. These representations provide a holistic view of the multimodal data, which is used for fusion that leads to task predictions. Our experiments on popular sentiment analysis benchmarks, MOSI and MOSEI, demonstrate significant gains over state-of-the-art models. We also consider the task of Multimodal Humor Detection and experiment on the recently proposed UR_FUNNY dataset. Here too, our model fares better than strong baselines, establishing MISA as a useful multimodal framework. 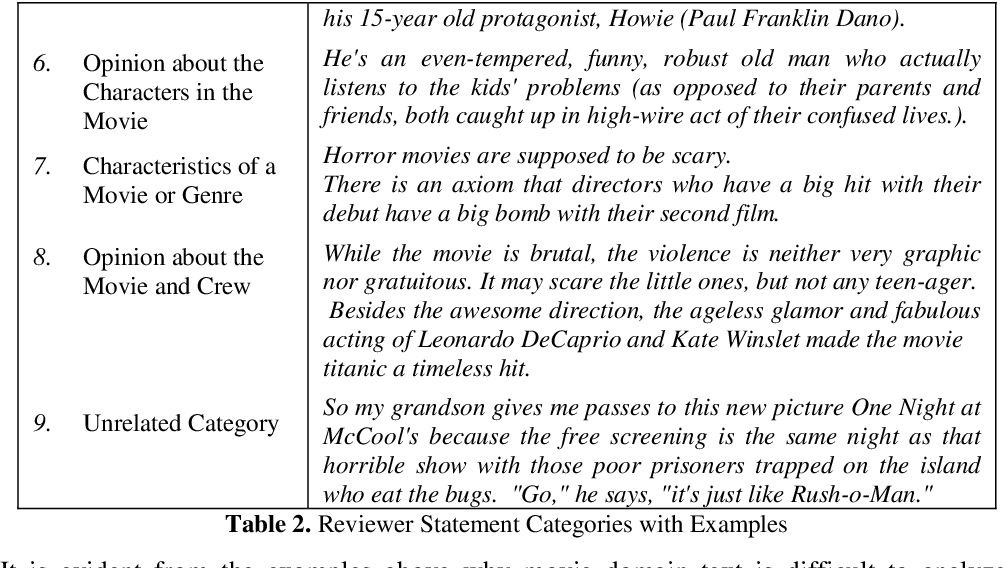 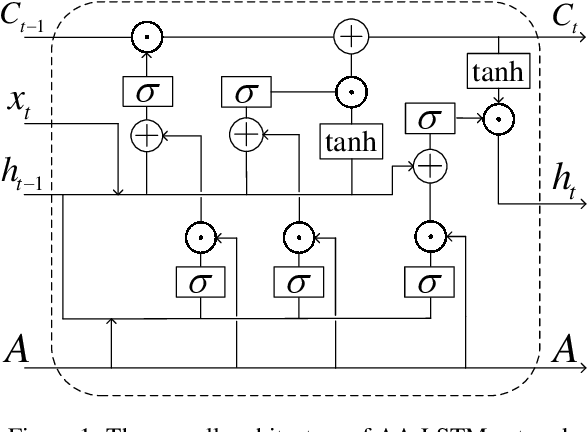 Aspect-based sentiment analysis (ABSA) aims to predict fine-grained sentiments of comments with respect to given aspect terms or categories. In previous ABSA methods, the importance of aspect has been realized and verified. Most existing LSTM-based models take aspect into account via the attention mechanism, where the attention weights are calculated after the context is modeled in the form of contextual vectors. However, aspect-related information may be already discarded and aspect-irrelevant information may be retained in classic LSTM cells in the context modeling process, which can be improved to generate more effective context representations. This paper proposes a novel variant of LSTM, termed as aspect-aware LSTM (AA-LSTM), which incorporates aspect information into LSTM cells in the context modeling stage before the attention mechanism. Therefore, our AA-LSTM can dynamically produce aspect-aware contextual representations. We experiment with several representative LSTM-based models by replacing the classic LSTM cells with the AA-LSTM cells. Experimental results on SemEval-2014 Datasets demonstrate the effectiveness of AA-LSTM.