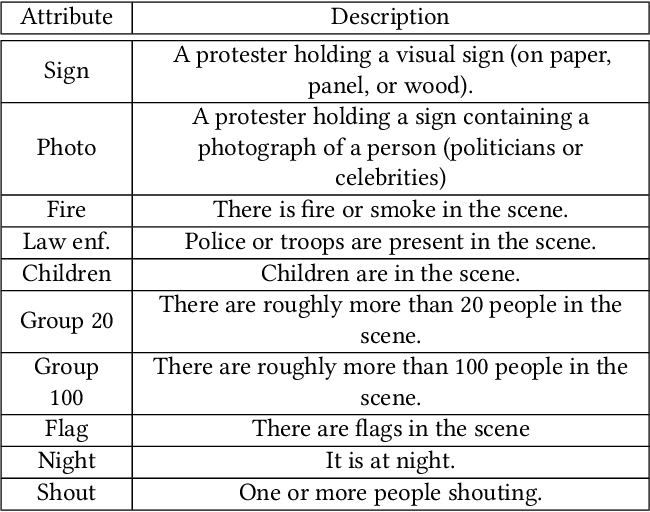 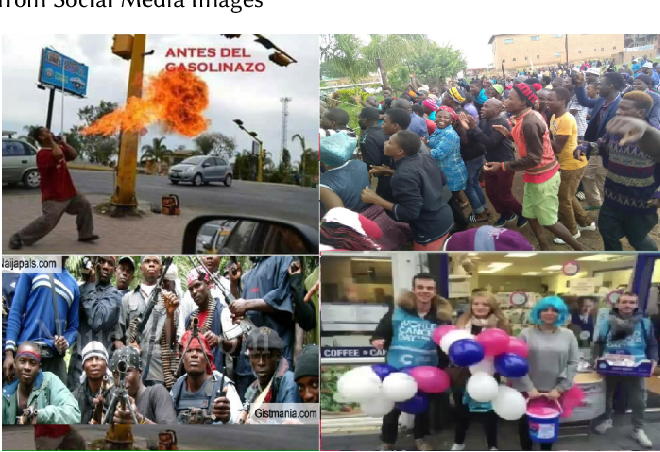 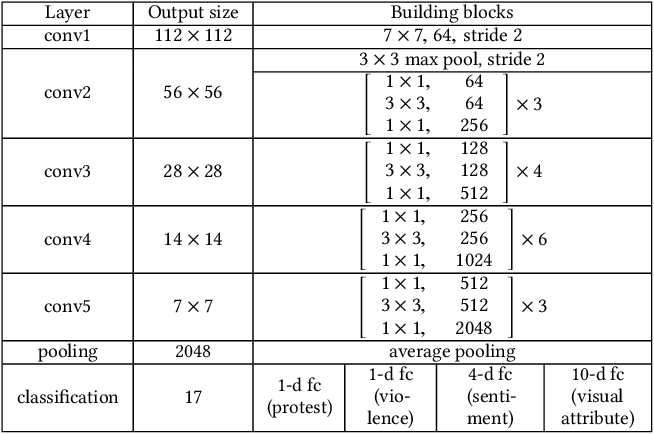 We develop a novel visual model which can recognize protesters, describe their activities by visual attributes and estimate the level of perceived violence in an image. Studies of social media and protests use natural language processing to track how individuals use hashtags and links, often with a focus on those items' diffusion. These approaches, however, may not be effective in fully characterizing actual real-world protests (e.g., violent or peaceful) or estimating the demographics of participants (e.g., age, gender, and race) and their emotions. Our system characterizes protests along these dimensions. We have collected geotagged tweets and their images from 2013-2017 and analyzed multiple major protest events in that period. A multi-task convolutional neural network is employed in order to automatically classify the presence of protesters in an image and predict its visual attributes, perceived violence and exhibited emotions. We also release the UCLA Protest Image Dataset, our novel dataset of 40,764 images (11,659 protest images and hard negatives) with various annotations of visual attributes and sentiments. Using this dataset, we train our model and demonstrate its effectiveness. We also present experimental results from various analysis on geotagged image data in several prevalent protest events. Our dataset will be made accessible at https://www.sscnet.ucla.edu/comm/jjoo/mm-protest/. 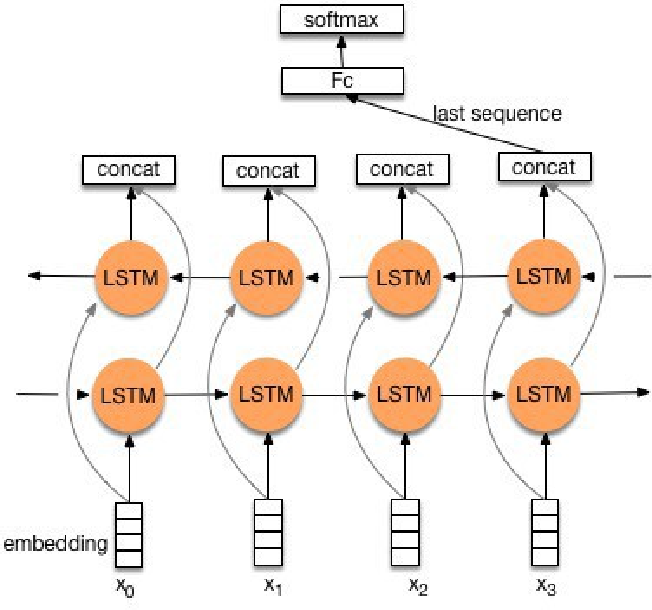 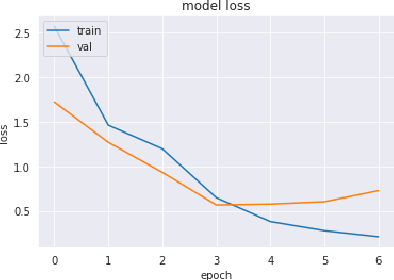 Toxic online speech has become a crucial problem nowadays due to an exponential increase in the use of internet by people from different cultures and educational backgrounds. Differentiating if a text message belongs to hate speech and offensive language is a key challenge in automatic detection of toxic text content. In this paper, we propose an approach to automatically classify tweets into three classes: Hate, offensive and Neither. Using public tweet data set, we first perform experiments to build BI-LSTM models from empty embedding and then we also try the same neural network architecture with pre-trained Glove embedding. Next, we introduce a transfer learning approach for hate speech detection using an existing pre-trained language model BERT (Bidirectional Encoder Representations from Transformers), DistilBert (Distilled version of BERT) and GPT-2 (Generative Pre-Training). We perform hyper parameters tuning analysis of our best model (BI-LSTM) considering different neural network architectures, learn-ratings and normalization methods etc. After tuning the model and with the best combination of parameters, we achieve over 92 percent accuracy upon evaluating it on test data. We also create a class module which contains main functionality including text classification, sentiment checking and text data augmentation. This model could serve as an intermediate module between user and Twitter.

Learning from the Best: Rationalizing Prediction by Adversarial Information Calibration 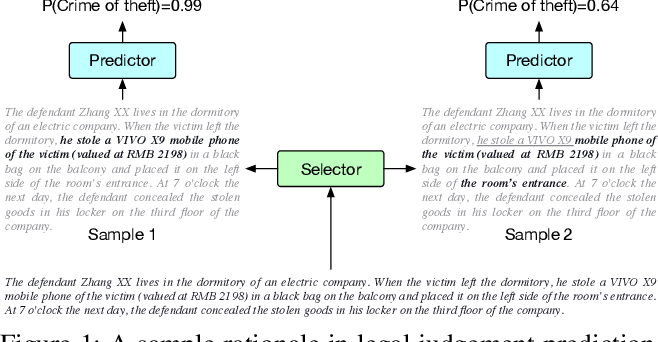 Explaining the predictions of AI models is paramount in safety-critical applications, such as in legal or medical domains. One form of explanation for a prediction is an extractive rationale, i.e., a subset of features of an instance that lead the model to give its prediction on the instance. Previous works on generating extractive rationales usually employ a two-phase model: a selector that selects the most important features (i.e., the rationale) followed by a predictor that makes the prediction based exclusively on the selected features. One disadvantage of these works is that the main signal for learning to select features comes from the comparison of the answers given by the predictor and the ground-truth answers. In this work, we propose to squeeze more information from the predictor via an information calibration method. More precisely, we train two models jointly: one is a typical neural model that solves the task at hand in an accurate but black-box manner, and the other is a selector-predictor model that additionally produces a rationale for its prediction. The first model is used as a guide to the second model. We use an adversarial-based technique to calibrate the information extracted by the two models such that the difference between them is an indicator of the missed or over-selected features. In addition, for natural language tasks, we propose to use a language-model-based regularizer to encourage the extraction of fluent rationales. Experimental results on a sentiment analysis task as well as on three tasks from the legal domain show the effectiveness of our approach to rationale extraction.


* Proceedings of the 35th AAAI Conference on Artificial Intelligence, 2021 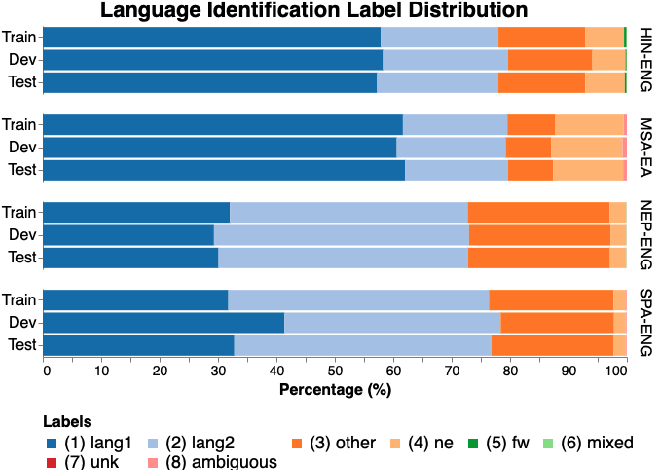 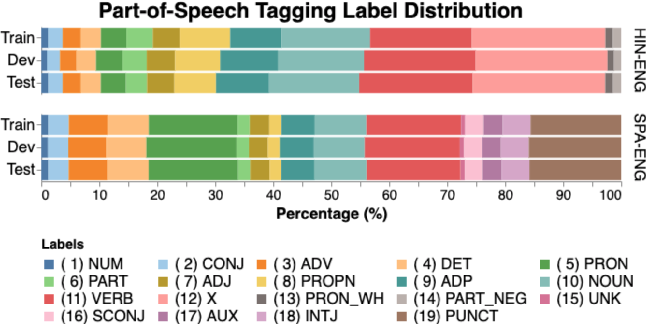 Recent trends in NLP research have raised an interest in linguistic code-switching (CS); modern approaches have been proposed to solve a wide range of NLP tasks on multiple language pairs. Unfortunately, these proposed methods are hardly generalizable to different code-switched languages. In addition, it is unclear whether a model architecture is applicable for a different task while still being compatible with the code-switching setting. This is mainly because of the lack of a centralized benchmark and the sparse corpora that researchers employ based on their specific needs and interests. To facilitate research in this direction, we propose a centralized benchmark for Linguistic Code-switching Evaluation (LinCE) that combines ten corpora covering four different code-switched language pairs (i.e., Spanish-English, Nepali-English, Hindi-English, and Modern Standard Arabic-Egyptian Arabic) and four tasks (i.e., language identification, named entity recognition, part-of-speech tagging, and sentiment analysis). As part of the benchmark centralization effort, we provide an online platform at ritual.uh.edu/lince, where researchers can submit their results while comparing with others in real-time. In addition, we provide the scores of different popular models, including LSTM, ELMo, and multilingual BERT so that the NLP community can compare against state-of-the-art systems. LinCE is a continuous effort, and we will expand it with more low-resource languages and tasks. 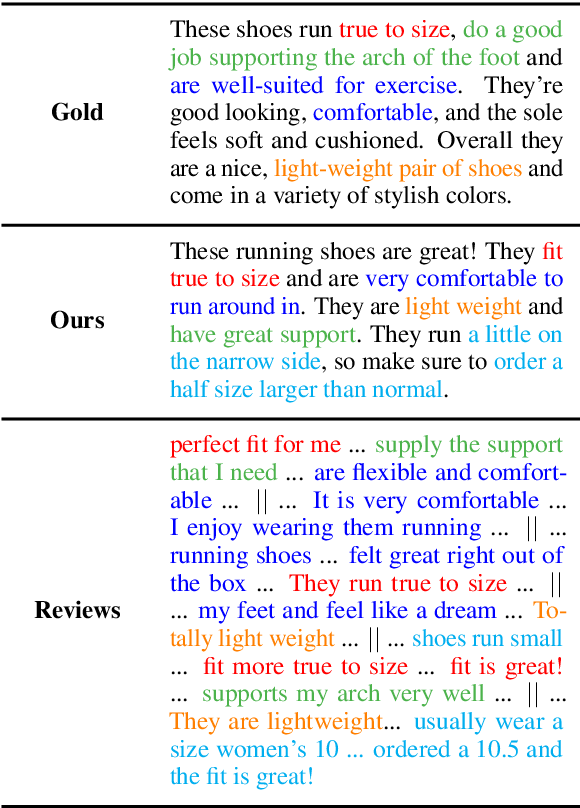 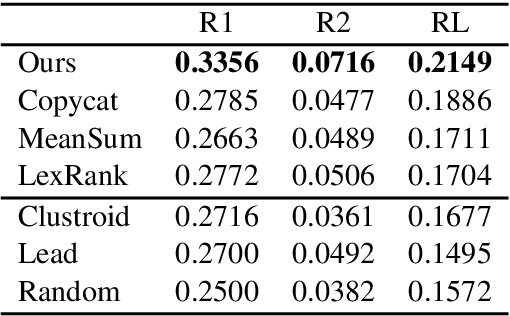 Opinion summarization is an automatic creation of text reflecting subjective information expressed in multiple documents, such as user reviews of a product. The task is practically important and has attracted a lot of attention. However, due to a high cost of summary production, datasets large enough for training supervised models are lacking. Instead, the task has been traditionally approached with extractive methods that learn to select text fragments in an unsupervised or weakly-supervised way. Recently, it has been shown that abstractive summaries, potentially more fluent and better at reflecting conflicting information, can also be produced in an unsupervised fashion. However, these models, not being exposed to the actual summaries, fail to capture their essential properties. In this work, we show that even a handful of summaries is sufficient to bootstrap generation of the summary text with all expected properties, such as writing style, informativeness, fluency, and sentiment preservation. We start by training a language model to generate a new product review given available reviews of the product. The model is aware of the properties: it proceeds with first generating property values and then producing a review conditioned on them. We do not use any summaries in this stage and the property values are derived from reviews with no manual effort. In the second stage, we fine-tune the module predicting the property values on a few available summaries. This lets us switch the generator to the summarization mode. Our approach substantially outperforms previous extractive and abstractive methods in automatic and human evaluation. 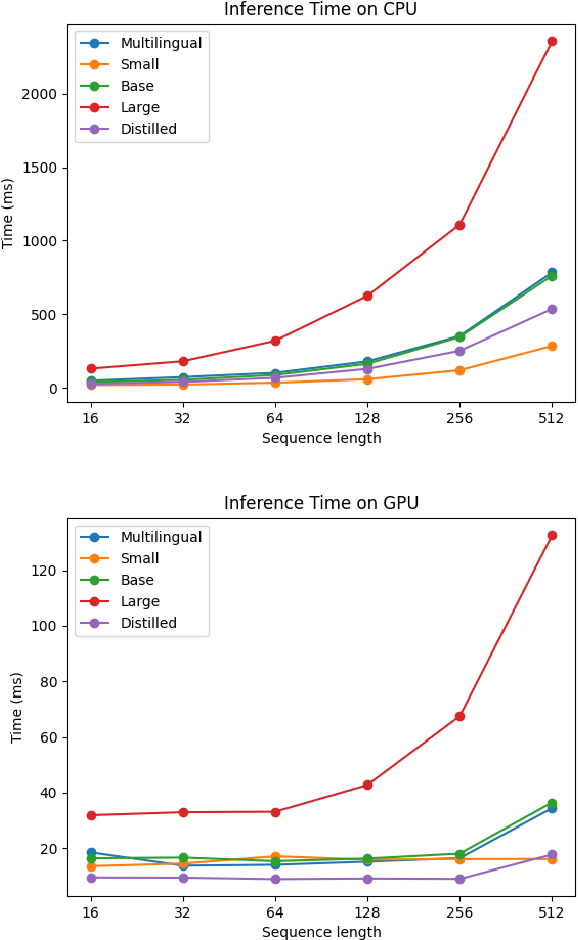 As transfer learning from large-scale pre-trained language models has become prevalent in Natural Language Processing, running these models in computationally constrained environments remains a challenging problem yet to address. Several solutions including knowledge distillation, network quantization or network pruning have been proposed; however, these approaches focus mostly on the English language, thus widening the gap when considering low-resource languages. In this work, we introduce three light and fast versions of distilled BERT models for the Romanian language: Distil-BERT-base-ro, Distil-RoBERT-base and DistilMulti-BERT-base-ro. The first two models resulted from individually distilling the knowledge of the two base versions of Romanian BERTs available in literature, while the last one was obtained by distilling their ensemble. To our knowledge, this is the first attempt to create publicly available Romanian distilled BERT models, which were thoroughly evaluated on five tasks: part-of-speech tagging, named entity recognition, sentiment analysis, semantic textual similarity and dialect identification. The experimental results on these benchmarks proved that our three distilled models maintain most performance in terms of accuracy with their teachers, while being twice as fast on a GPU and ~35\% smaller. In addition, we further test the similarity between our students and their teachers prediction by measuring their label and probability loyalty, together with regression loyalty - a new metric introduced in this work. 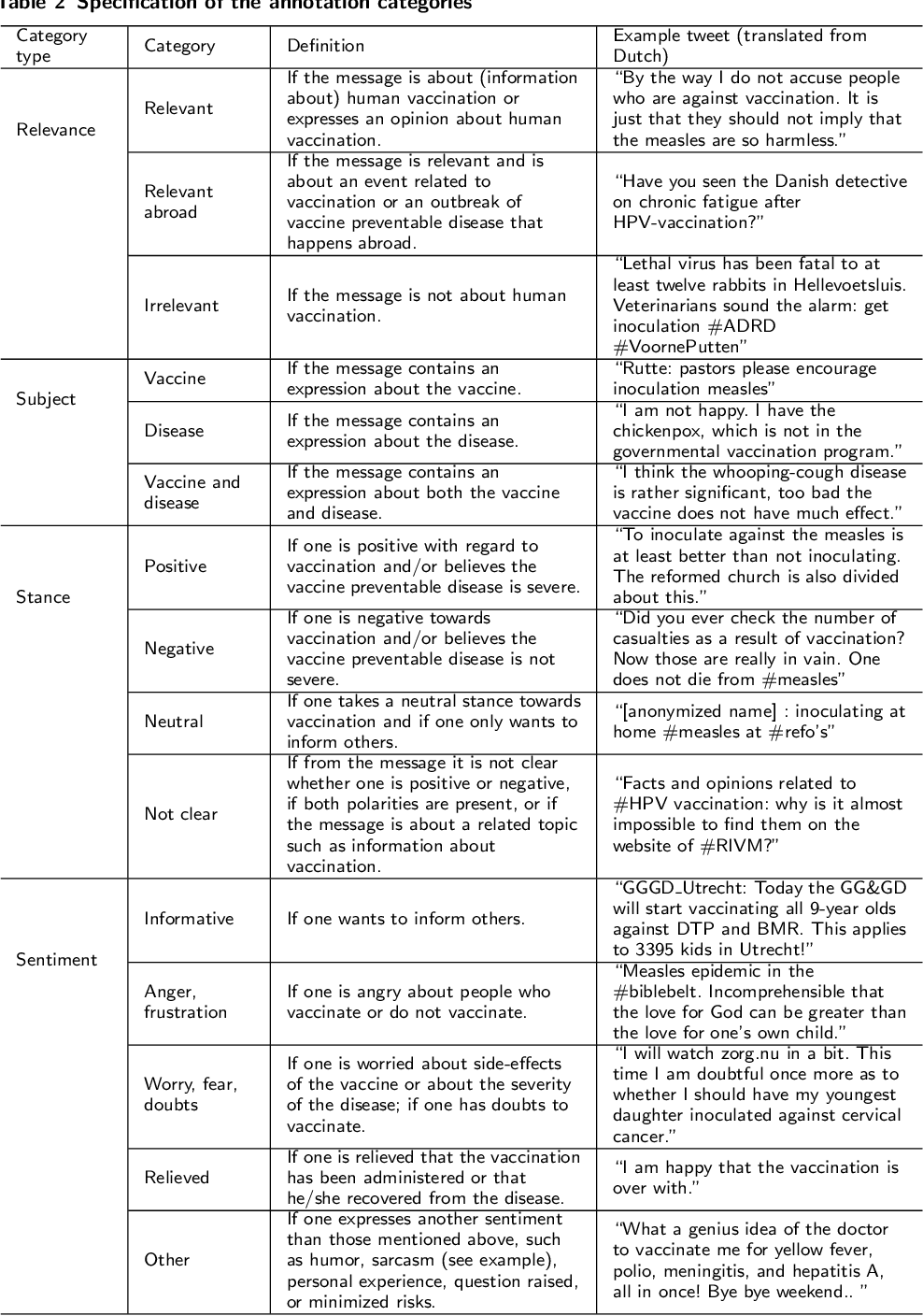 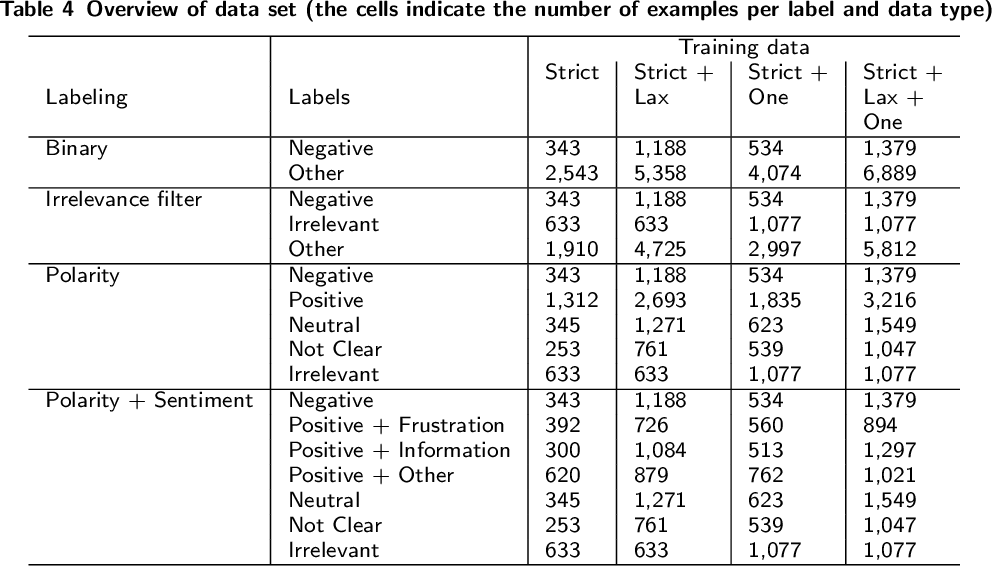 We developed a system to automatically classify stance towards vaccination in Twitter messages, with a focus on messages with a negative stance. Such a system makes it possible to monitor the ongoing stream of messages on social media, offering actionable insights into public hesitance with respect to vaccination. For Dutch Twitter messages that mention vaccination-related key terms, we annotated their stance and feeling in relation to vaccination (provided that they referred to this topic). Subsequently, we used these coded data to train and test different machine learning set-ups. With the aim to best identify messages with a negative stance towards vaccination, we compared set-ups at an increasing dataset size and decreasing reliability, at an increasing number of categories to distinguish, and with different classification algorithms. We found that Support Vector Machines trained on a combination of strictly and laxly labeled data with a more fine-grained labeling yielded the best result, at an F1-score of 0.36 and an Area under the ROC curve of 0.66, outperforming a rule-based sentiment analysis baseline that yielded an F1-score of 0.25 and an Area under the ROC curve of 0.57. The outcomes of our study indicate that stance prediction by a computerized system only is a challenging task. Our analysis of the data and behavior of our system suggests that an approach is needed in which the use of a larger training dataset is combined with a setting in which a human-in-the-loop provides the system with feedback on its predictions. 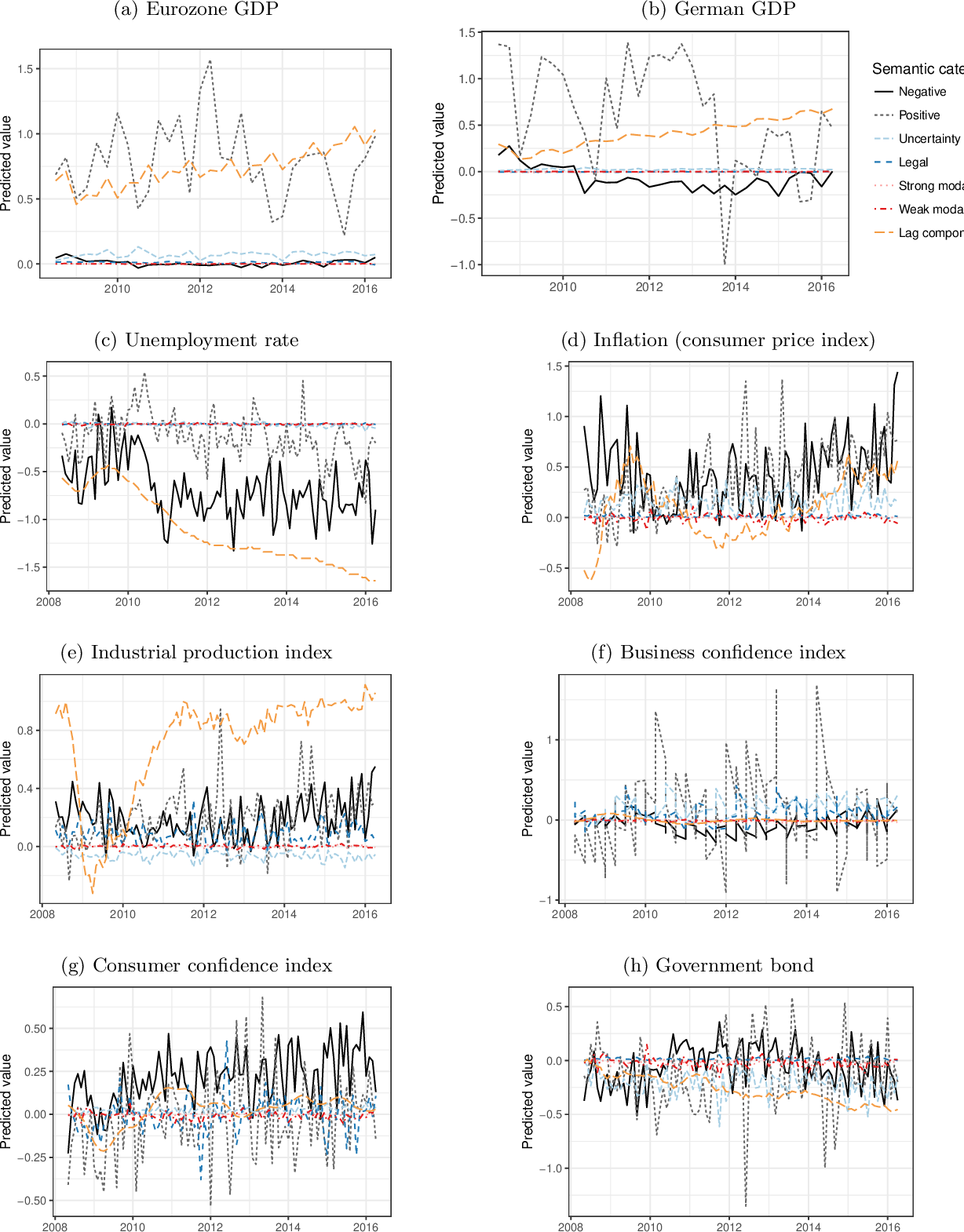 The macroeconomic climate influences operations with regard to, e.g., raw material prices, financing, supply chain utilization and demand quotas. In order to adapt to the economic environment, decision-makers across the public and private sectors require accurate forecasts of the economic outlook. Existing predictive frameworks base their forecasts primarily on time series analysis, as well as the judgments of experts. As a consequence, current approaches are often biased and prone to error. In order to reduce forecast errors, this paper presents an innovative methodology that extends lag variables with unstructured data in the form of financial news: (1) we apply a variety of models from machine learning to word counts as a high-dimensional input. However, this approach suffers from low interpretability and overfitting, motivating the following remedies. (2) We follow the intuition that the economic climate is driven by general sentiments and suggest a projection of words onto latent semantic structures as a means of feature engineering. (3) We propose a semantic path model, together with estimation technique based on regularization, in order to yield full interpretability of the forecasts. We demonstrate the predictive performance of our approach by utilizing 80,813 ad hoc announcements in order to make long-term forecasts of up to 24 months ahead regarding key macroeconomic indicators. Back-testing reveals a considerable reduction in forecast errors.