Domain adaptation considers the problem of generalising a model learnt using data from a particular source domain to a different target domain. Often it is difficult to find a suitable single source to adapt from, and one must consider multiple sources. Using an unrelated source can result in sub-optimal performance, known as the \emph{negative transfer}. However, it is challenging to select the appropriate source(s) for classifying a given target instance in multi-source unsupervised domain adaptation (UDA). We model source-selection as an attention-learning problem, where we learn attention over sources for a given target instance. For this purpose, we first independently learn source-specific classification models, and a relatedness map between sources and target domains using pseudo-labelled target domain instances. Next, we learn attention-weights over the sources for aggregating the predictions of the source-specific models. Experimental results on cross-domain sentiment classification benchmarks show that the proposed method outperforms prior proposals in multi-source UDA. 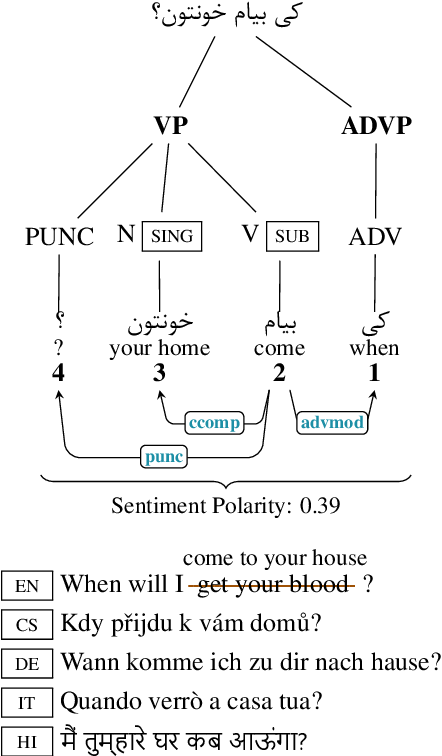 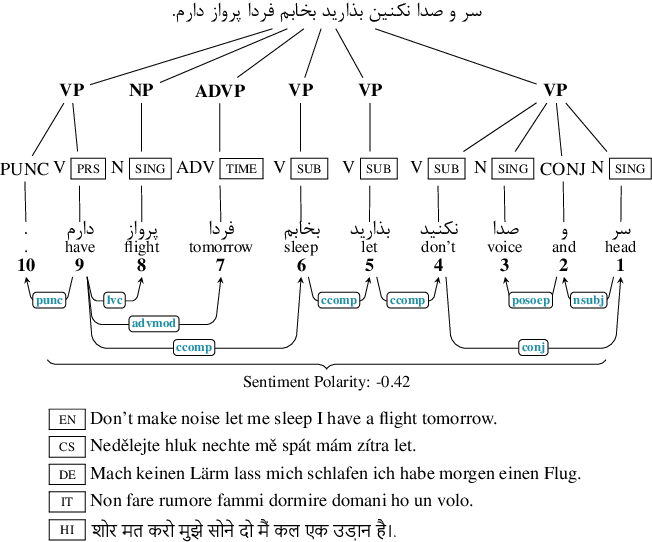 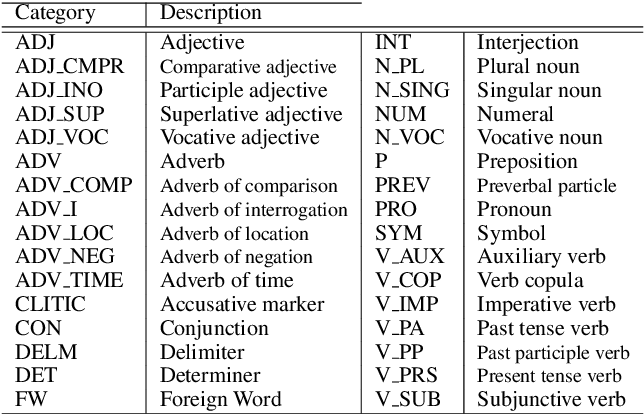 Language recognition has been significantly advanced in recent years by means of modern machine learning methods such as deep learning and benchmarks with rich annotations. However, research is still limited in low-resource formal languages. This consists of a significant gap in describing the colloquial language especially for low-resourced ones such as Persian. In order to target this gap for low resource languages, we propose a "Large Scale Colloquial Persian Dataset" (LSCP). LSCP is hierarchically organized in a semantic taxonomy that focuses on multi-task informal Persian language understanding as a comprehensive problem. This encompasses the recognition of multiple semantic aspects in the human-level sentences, which naturally captures from the real-world sentences. We believe that further investigations and processing, as well as the application of novel algorithms and methods, can strengthen enriching computerized understanding and processing of low resource languages. The proposed corpus consists of 120M sentences resulted from 27M tweets annotated with parsing tree, part-of-speech tags, sentiment polarity and translation in five different languages.

An Algorithm for Routing Capsules in All Domains 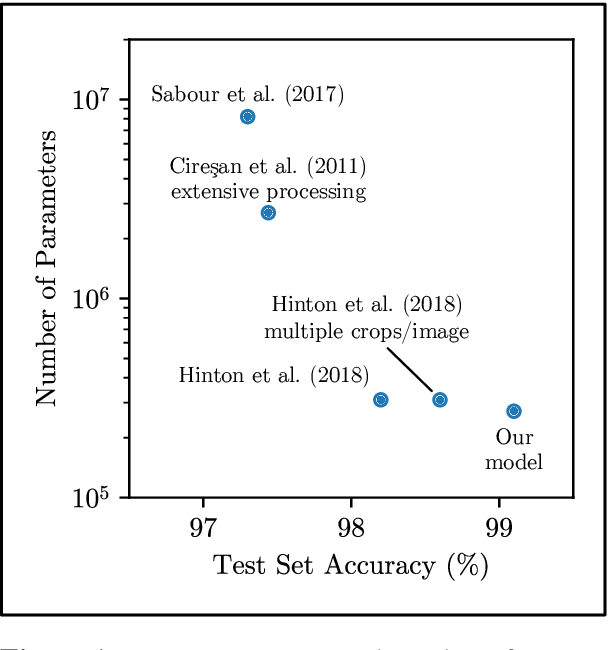 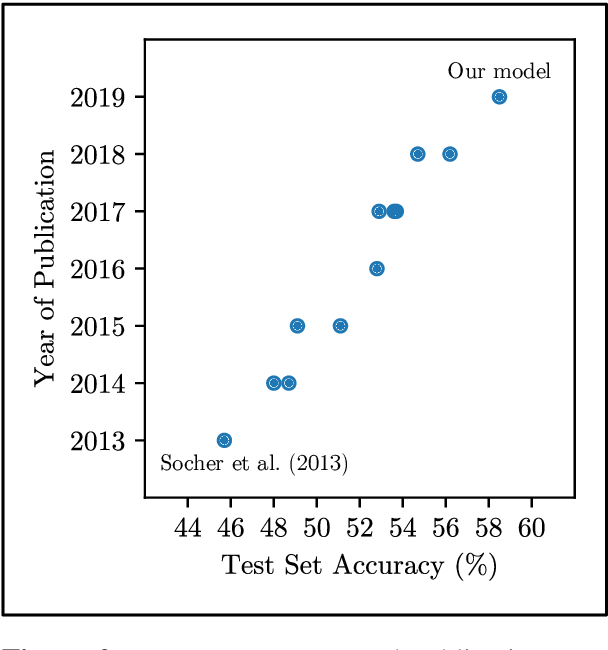 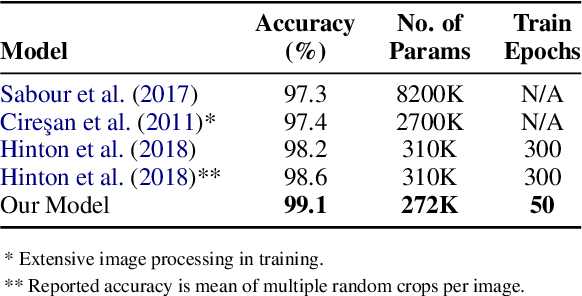 Building on recent work on capsule networks, we propose a new, general-purpose form of ``routing by agreement'' that activates output capsules in a layer as a function of their net benefit to use and net cost to ignore input capsules from earlier layers. To illustrate the usefulness of our routing algorithm, we present two capsule networks that apply it in different domains: vision and language. The first network achieves new state-of-the-art accuracy of 99.1% on the smallNORB visual recognition task with fewer parameters and an order of magnitude less training than previous capsule models, and we find evidence that it learns to perform a form of ``reverse graphics.'' The second network achieves new state-of-the-art accuracies on the root sentences of the Stanford Sentiment Treebank: 58.5% on fine-grained and 95.6% on binary labels with a single-task model that routes frozen embeddings from a pretrained transformer as capsules. In both domains, we train with the same regime. Code is available at https://github.com/glassroom/heinsen_routing along with replication instructions. 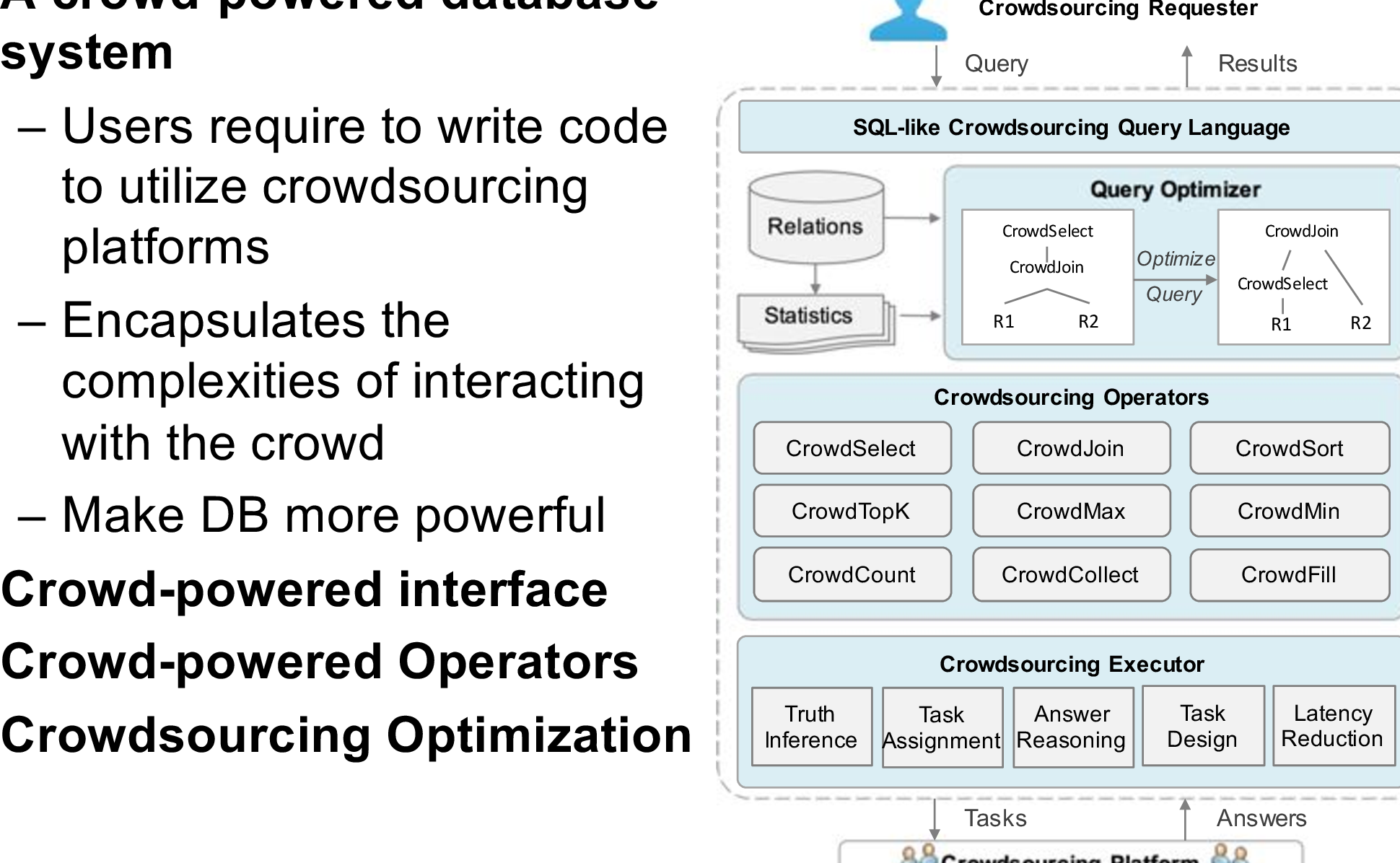 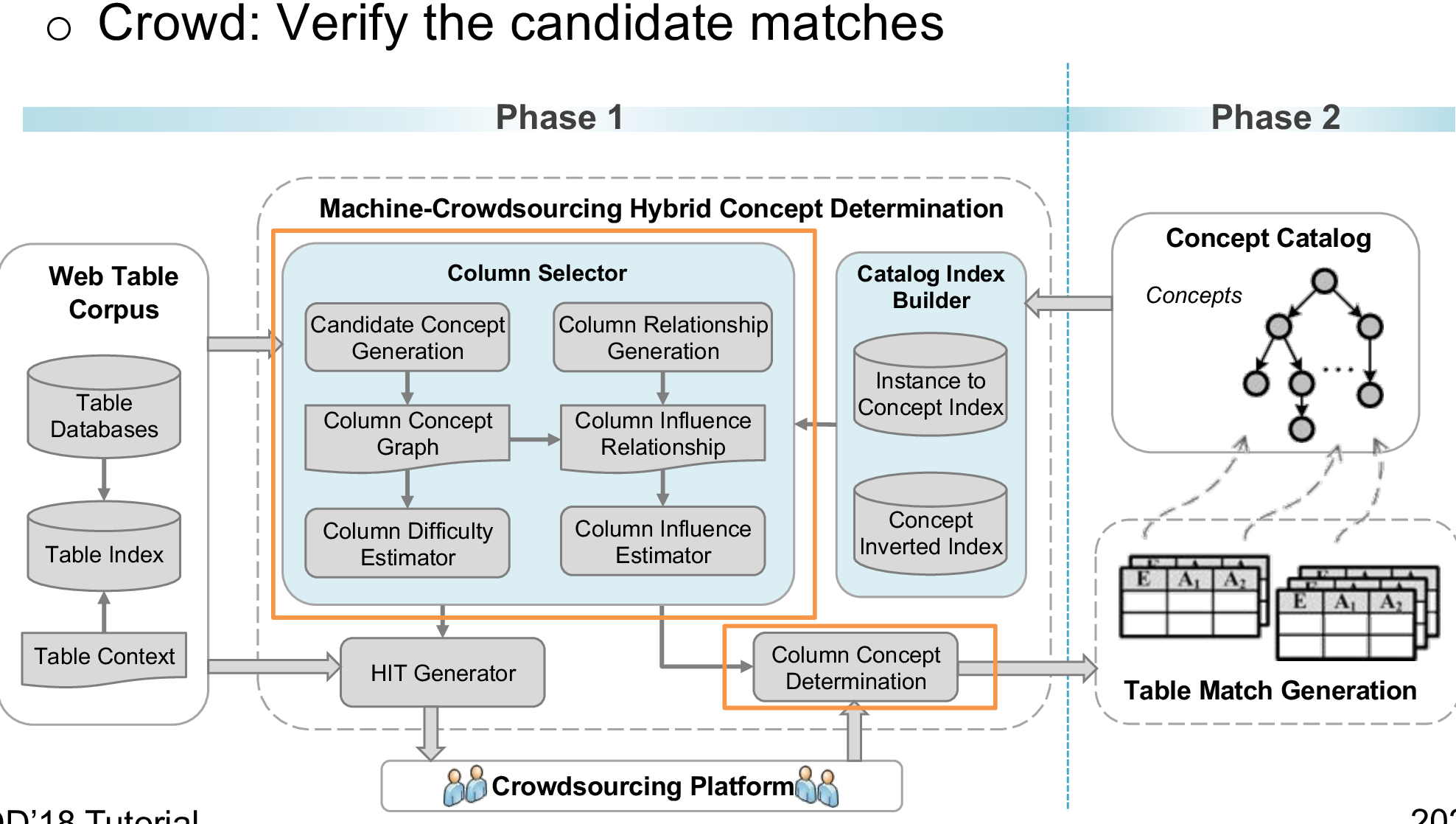 Many data mining tasks cannot be completely addressed by auto- mated processes, such as sentiment analysis and image classification. Crowdsourcing is an effective way to harness the human cognitive ability to process these machine-hard tasks. Thanks to public crowdsourcing platforms, e.g., Amazon Mechanical Turk and Crowd- Flower, we can easily involve hundreds of thousands of ordinary workers (i.e., the crowd) to address these machine-hard tasks. In this tutorial, we will survey and synthesize a wide spectrum of existing studies on crowd-powered data mining. We first give an overview of crowdsourcing, and then summarize the fundamental techniques, including quality control, cost control, and latency control, which must be considered in crowdsourced data mining. Next we review crowd-powered data mining operations, including classification, clustering, pattern mining, machine learning using the crowd (including deep learning, transfer learning and semi-supervised learning) and knowledge discovery. Finally, we provide the emerging challenges in crowdsourced data mining.

Deep neural networks (DNNs) have achieved impressive predictive performance due to their ability to learn complex, non-linear relationships between variables. However, the inability to effectively visualize these relationships has led to DNNs being characterized as black boxes and consequently limited their applications. To ameliorate this problem, we introduce the use of hierarchical interpretations to explain DNN predictions through our proposed method, agglomerative contextual decomposition (ACD). Given a prediction from a trained DNN, ACD produces a hierarchical clustering of the input features, along with the contribution of each cluster to the final prediction. This hierarchy is optimized to identify clusters of features that the DNN learned are predictive. Using examples from Stanford Sentiment Treebank and ImageNet, we show that ACD is effective at diagnosing incorrect predictions and identifying dataset bias. Through human experiments, we demonstrate that ACD enables users both to identify the more accurate of two DNNs and to better trust a DNN's outputs. We also find that ACD's hierarchy is largely robust to adversarial perturbations, implying that it captures fundamental aspects of the input and ignores spurious noise.

Measuring #GamerGate: A Tale of Hate, Sexism, and Bullying 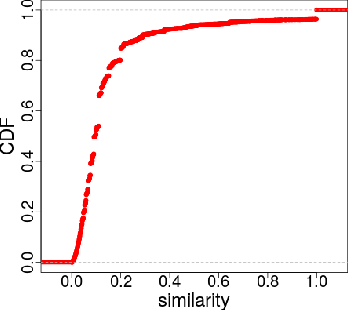 Over the past few years, online aggression and abusive behaviors have occurred in many different forms and on a variety of platforms. In extreme cases, these incidents have evolved into hate, discrimination, and bullying, and even materialized into real-world threats and attacks against individuals or groups. In this paper, we study the Gamergate controversy. Started in August 2014 in the online gaming world, it quickly spread across various social networking platforms, ultimately leading to many incidents of cyberbullying and cyberaggression. We focus on Twitter, presenting a measurement study of a dataset of 340k unique users and 1.6M tweets to study the properties of these users, the content they post, and how they differ from random Twitter users. We find that users involved in this "Twitter war" tend to have more friends and followers, are generally more engaged and post tweets with negative sentiment, less joy, and more hate than random users. We also perform preliminary measurements on how the Twitter suspension mechanism deals with such abusive behaviors. While we focus on Gamergate, our methodology to collect and analyze tweets related to aggressive and bullying activities is of independent interest. 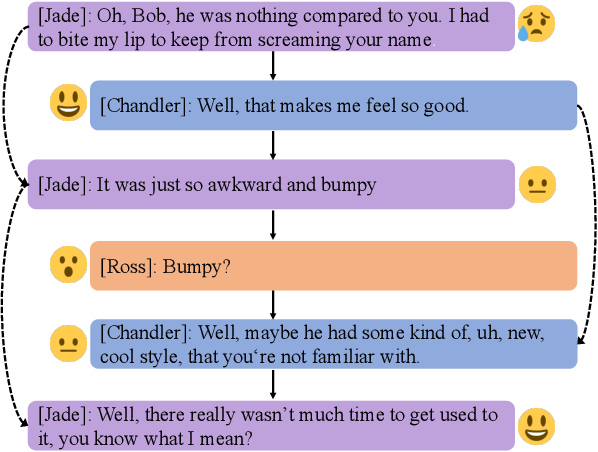 In dialogue systems, utterances with similar semantics may have distinctive emotions under different contexts. Therefore, modeling long-range contextual emotional relationships with speaker dependency plays a crucial part in dialogue emotion recognition. Meanwhile, distinguishing the different emotion categories is non-trivial since they usually have semantically similar sentiments. To this end, we adopt supervised contrastive learning to make different emotions mutually exclusive to identify similar emotions better. Meanwhile, we utilize an auxiliary response generation task to enhance the model's ability of handling context information, thereby forcing the model to recognize emotions with similar semantics in diverse contexts. To achieve these objectives, we use the pre-trained encoder-decoder model BART as our backbone model since it is very suitable for both understanding and generation tasks. The experiments on four datasets demonstrate that our proposed model obtains significantly more favorable results than the state-of-the-art model in dialogue emotion recognition. The ablation study further demonstrates the effectiveness of supervised contrastive loss and generative loss.

Multimodal Language Analysis is a demanding area of research, since it is associated with two requirements: combining different modalities and capturing temporal information. During the last years, several works have been proposed in the area, mostly centered around supervised learning in downstream tasks. In this paper we propose extracting unsupervised Multimodal Language representations that are universal and can be applied to different tasks. Towards this end, we map the word-level aligned multimodal sequences to 2-D matrices and then use Convolutional Autoencoders to learn embeddings by combining multiple datasets. Extensive experimentation on Sentiment Analysis (MOSEI) and Emotion Recognition (IEMOCAP) indicate that the learned representations can achieve near-state-of-the-art performance with just the use of a Logistic Regression algorithm for downstream classification. It is also shown that our method is extremely lightweight and can be easily generalized to other tasks and unseen data with small performance drop and almost the same number of parameters. The proposed multimodal representation models are open-sourced and will help grow the applicability of Multimodal Language.