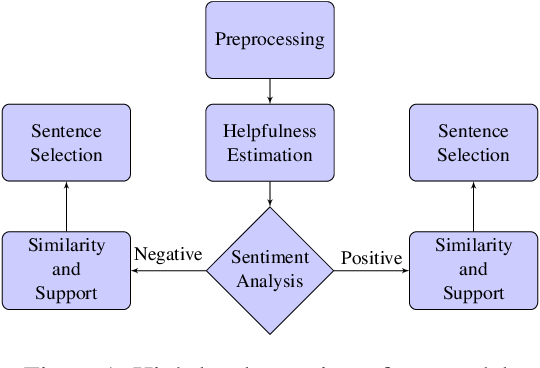 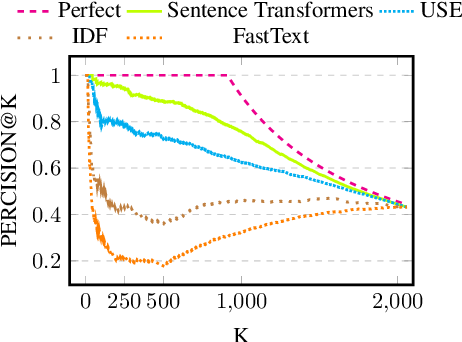 In recent years online shopping has gained momentum and became an important venue for customers wishing to save time and simplify their shopping process. A key advantage of shopping online is the ability to read what other customers are saying about products of interest. In this work, we aim to maintain this advantage in situations where extreme brevity is needed, for example, when shopping by voice. We suggest a novel task of extracting a single representative helpful sentence from a set of reviews for a given product. The selected sentence should meet two conditions: first, it should be helpful for a purchase decision and second, the opinion it expresses should be supported by multiple reviewers. This task is closely related to the task of Multi Document Summarization in the product reviews domain but differs in its objective and its level of conciseness. We collect a dataset in English of sentence helpfulness scores via crowd-sourcing and demonstrate its reliability despite the inherent subjectivity involved. Next, we describe a complete model that extracts representative helpful sentences with positive and negative sentiment towards the product and demonstrate that it outperforms several baselines. 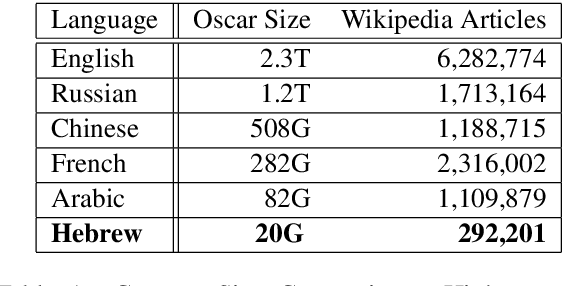 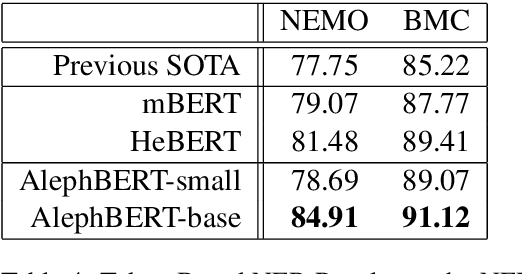 Large Pre-trained Language Models (PLMs) have become ubiquitous in the development of language understanding technology and lie at the heart of many artificial intelligence advances. While advances reported for English using PLMs are unprecedented, reported advances using PLMs in Hebrew are few and far between. The problem is twofold. First, Hebrew resources available for training NLP models are not at the same order of magnitude as their English counterparts. Second, there are no accepted tasks and benchmarks to evaluate the progress of Hebrew PLMs on. In this work we aim to remedy both aspects. First, we present AlephBERT, a large pre-trained language model for Modern Hebrew, which is trained on larger vocabulary and a larger dataset than any Hebrew PLM before. Second, using AlephBERT we present new state-of-the-art results on multiple Hebrew tasks and benchmarks, including: Segmentation, Part-of-Speech Tagging, full Morphological Tagging, Named-Entity Recognition and Sentiment Analysis. We make our AlephBERT model publicly available, providing a single point of entry for the development of Hebrew NLP applications. 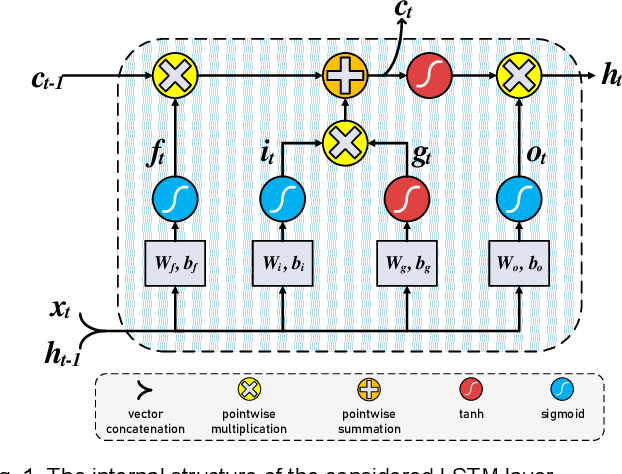 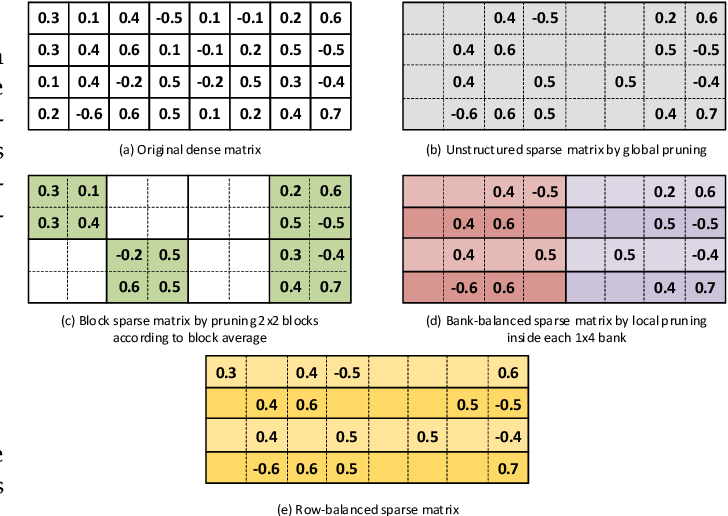 In this paper, first, a hardware-friendly pruning algorithm for reducing energy consumption and improving the speed of Long Short-Term Memory (LSTM) neural network accelerators is presented. Next, an FPGA-based platform for efficient execution of the pruned networks based on the proposed algorithm is introduced. By considering the sensitivity of two weight matrices of the LSTM models in pruning, different sparsity ratios (i.e., dual-ratio sparsity) are applied to these weight matrices. To reduce memory accesses, a row-wise sparsity pattern is adopted. The proposed hardware architecture makes use of computation overlapping and pipelining to achieve low-power and high-speed. The effectiveness of the proposed pruning algorithm and accelerator is assessed under some benchmarks for natural language processing, binary sentiment classification, and speech recognition. Results show that, e.g., compared to a recently published work in this field, the proposed accelerator could provide up to 272% higher effective GOPS/W and the perplexity error is reduced by up to 1.4% for the PTB dataset. 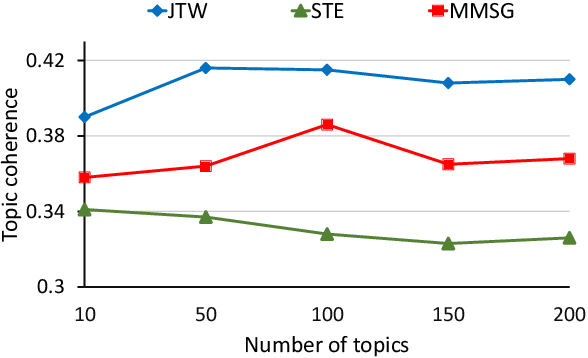 We propose a novel generative model to explore both local and global context for joint learning topics and topic-specific word embeddings. In particular, we assume that global latent topics are shared across documents, a word is generated by a hidden semantic vector encoding its contextual semantic meaning, and its context words are generated conditional on both the hidden semantic vector and global latent topics. Topics are trained jointly with the word embeddings. The trained model maps words to topic-dependent embeddings, which naturally addresses the issue of word polysemy. Experimental results show that the proposed model outperforms the word-level embedding methods in both word similarity evaluation and word sense disambiguation. Furthermore, the model also extracts more coherent topics compared with existing neural topic models or other models for joint learning of topics and word embeddings. Finally, the model can be easily integrated with existing deep contextualized word embedding learning methods to further improve the performance of downstream tasks such as sentiment classification. 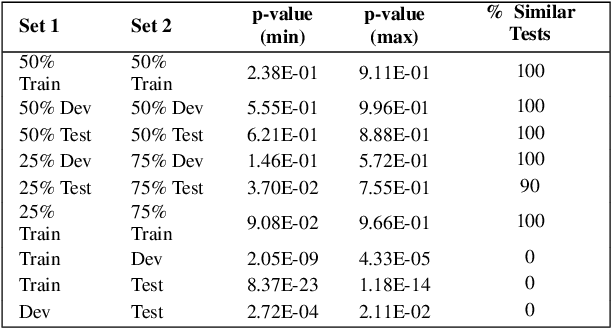 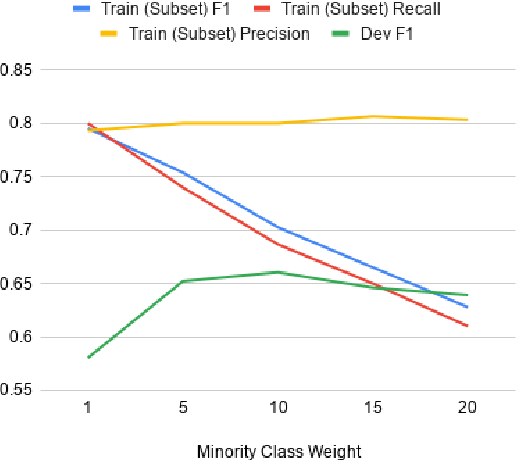 The automatic identification of propaganda has gained significance in recent years due to technological and social changes in the way news is generated and consumed. That this task can be addressed effectively using BERT, a powerful new architecture which can be fine-tuned for text classification tasks, is not surprising. However, propaganda detection, like other tasks that deal with news documents and other forms of decontextualized social communication (e.g. sentiment analysis), inherently deals with data whose categories are simultaneously imbalanced and dissimilar. We show that BERT, while capable of handling imbalanced classes with no additional data augmentation, does not generalise well when the training and test data are sufficiently dissimilar (as is often the case with news sources, whose topics evolve over time). We show how to address this problem by providing a statistical measure of similarity between datasets and a method of incorporating cost-weighting into BERT when the training and test sets are dissimilar. We test these methods on the Propaganda Techniques Corpus (PTC) and achieve the second-highest score on sentence-level propaganda classification.

Selection of input features such as relevant pieces of text has become a common technique of highlighting how complex neural predictors operate. The selection can be optimized post-hoc for trained models or incorporated directly into the method itself (self-explaining). However, an overall selection does not properly capture the multi-faceted nature of useful rationales such as pros and cons for decisions. To this end, we propose a new game theoretic approach to class-dependent rationalization, where the method is specifically trained to highlight evidence supporting alternative conclusions. Each class involves three players set up competitively to find evidence for factual and counterfactual scenarios. We show theoretically in a simplified scenario how the game drives the solution towards meaningful class-dependent rationales. We evaluate the method in single- and multi-aspect sentiment classification tasks and demonstrate that the proposed method is able to identify both factual (justifying the ground truth label) and counterfactual (countering the ground truth label) rationales consistent with human rationalization. The code for our method is publicly available. 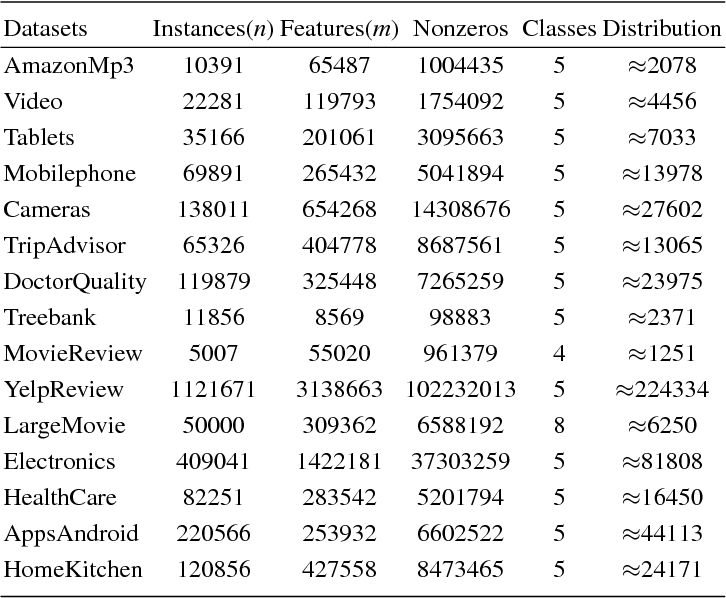 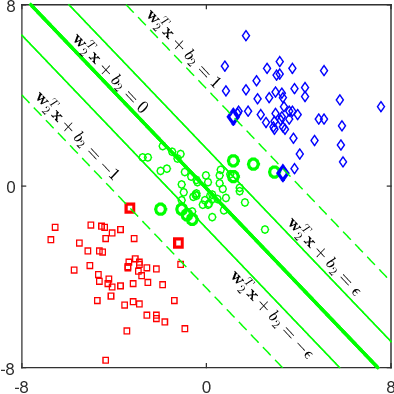 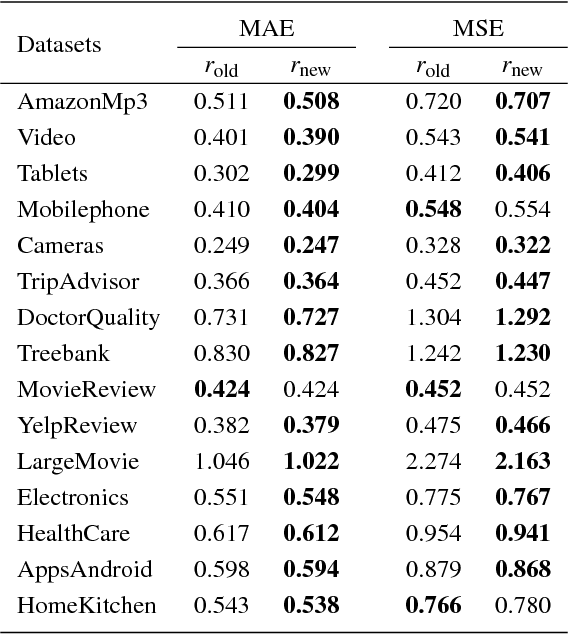 Ordinal regression (OR) is a special multiclass classification problem where an order relation exists among the labels. Recent years, people share their opinions and sentimental judgments conveniently with social networks and E-Commerce so that plentiful large-scale OR problems arise. However, few studies have focused on this kind of problems. Nonparallel Support Vector Ordinal Regression (NPSVOR) is a SVM-based OR model, which learns a hyperplane for each rank by solving a series of independent sub-optimization problems and then ensembles those learned hyperplanes to predict. The previous studies are focused on its nonlinear case and got a competitive testing performance, but its training is time consuming, particularly for large-scale data. In this paper, we consider NPSVOR's linear case and design an efficient training method based on the dual coordinate descent method (DCD). To utilize the order information among labels in prediction, a new prediction function is also proposed. Extensive contrast experiments on the text OR datasets indicate that the carefully implemented DCD is very suitable for training large data. 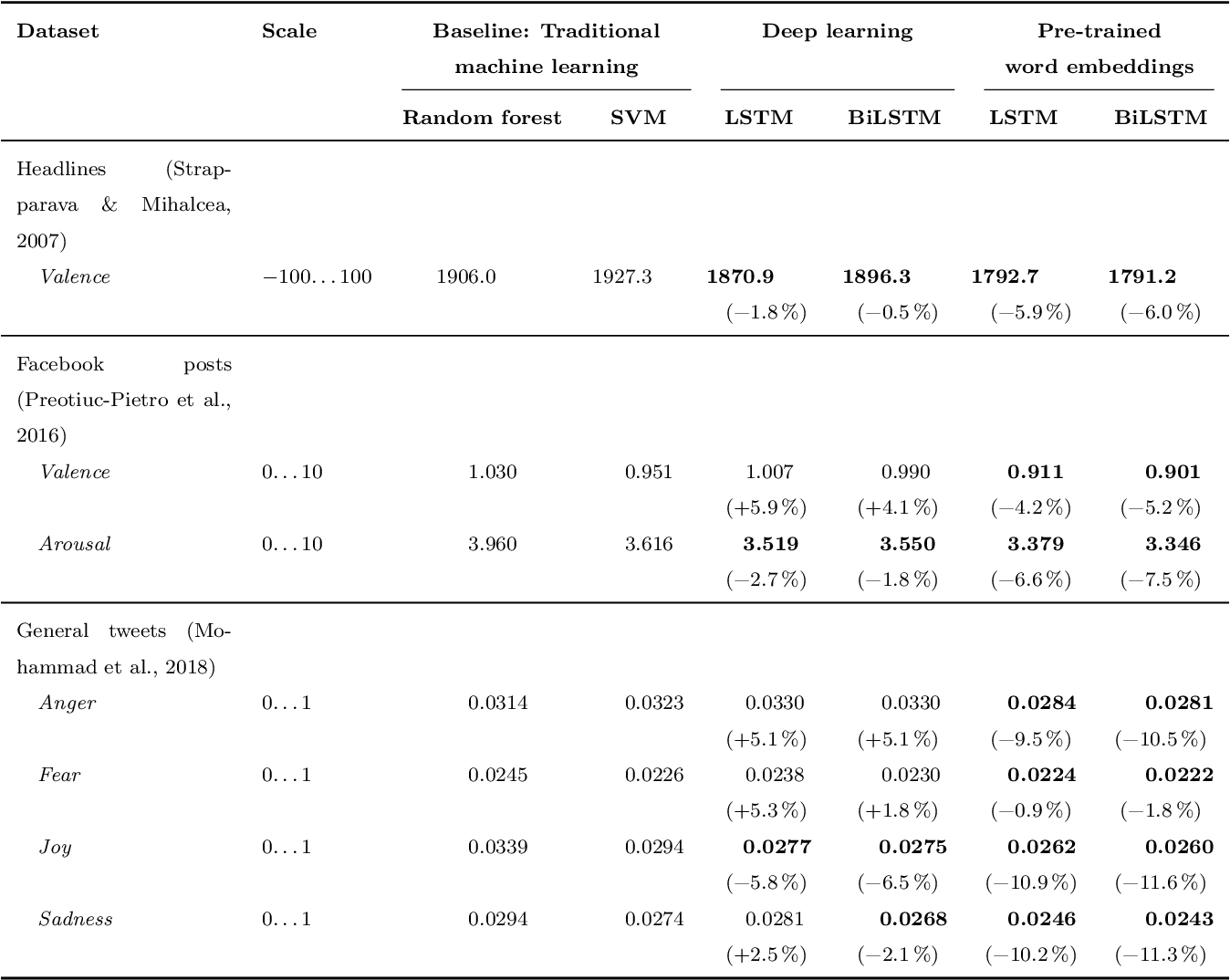 Emotions widely affect human decision-making. This fact is taken into account by affective computing with the goal of tailoring decision support to the emotional states of individuals. However, the accurate recognition of emotions within narrative documents presents a challenging undertaking due to the complexity and ambiguity of language. Performance improvements can be achieved through deep learning; yet, as demonstrated in this paper, the specific nature of this task requires the customization of recurrent neural networks with regard to bidirectional processing, dropout layers as a means of regularization, and weighted loss functions. In addition, we propose sent2affect, a tailored form of transfer learning for affective computing: here the network is pre-trained for a different task (i.e. sentiment analysis), while the output layer is subsequently tuned to the task of emotion recognition. The resulting performance is evaluated in a holistic setting across 6 benchmark datasets, where we find that both recurrent neural networks and transfer learning consistently outperform traditional machine learning. Altogether, the findings have considerable implications for the use of affective computing. 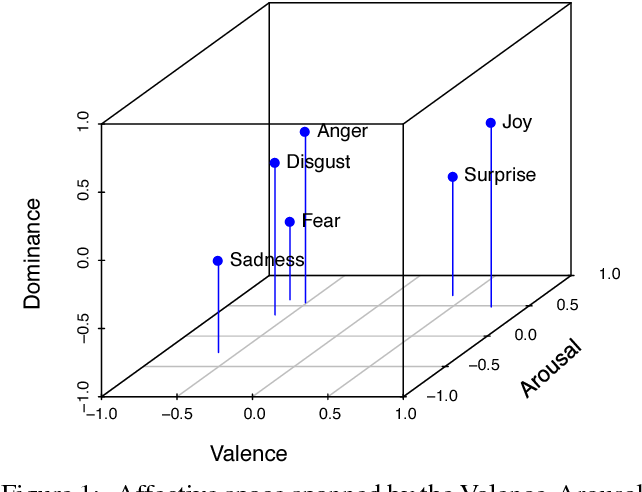 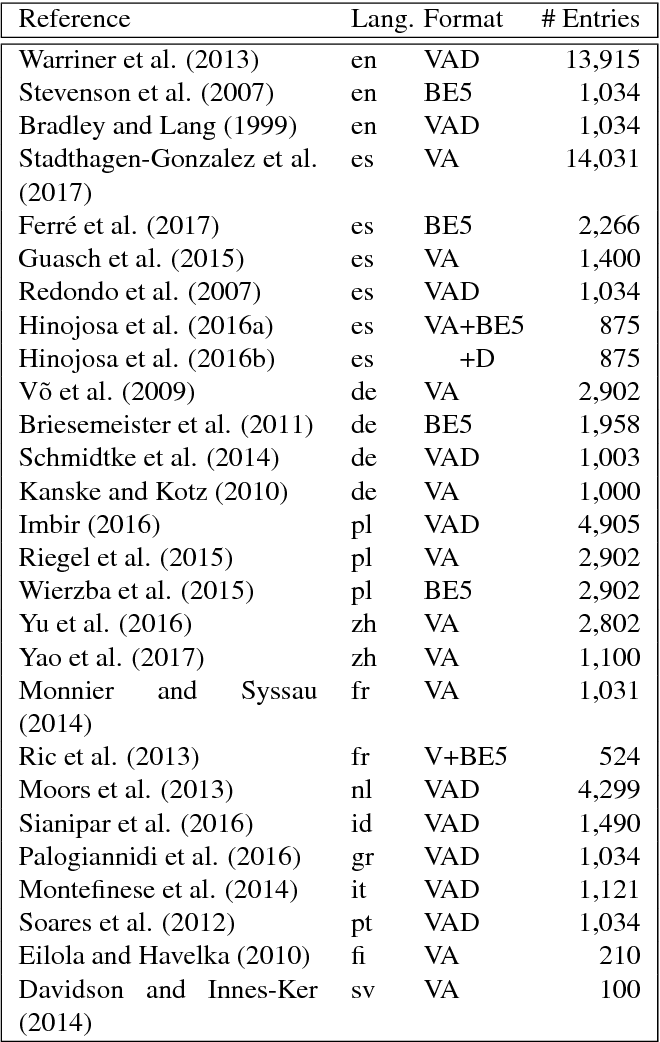 In the past years, sentiment analysis has increasingly shifted attention to representational frameworks more expressive than semantic polarity (being positive, negative or neutral). However, these richer formats (like Basic Emotions or Valence-Arousal-Dominance, and variants therefrom), rooted in psychological research, tend to proliferate the number of representation schemes for emotion encoding. Thus, a large amount of representationally incompatible emotion lexicons has been developed by various research groups adopting one or the other emotion representation format. As a consequence, the reusability of these resources decreases as does the comparability of systems using them. In this paper, we propose to solve this dilemma by methods and tools which map different representation formats onto each other for the sake of mutual compatibility and interoperability of language resources. We present the first large-scale investigation of such representation mappings for four typologically diverse languages and find evidence that our approach produces (near-)gold quality emotion lexicons, even in cross-lingual settings. Finally, we use our models to create new lexicons for eight typologically diverse languages. 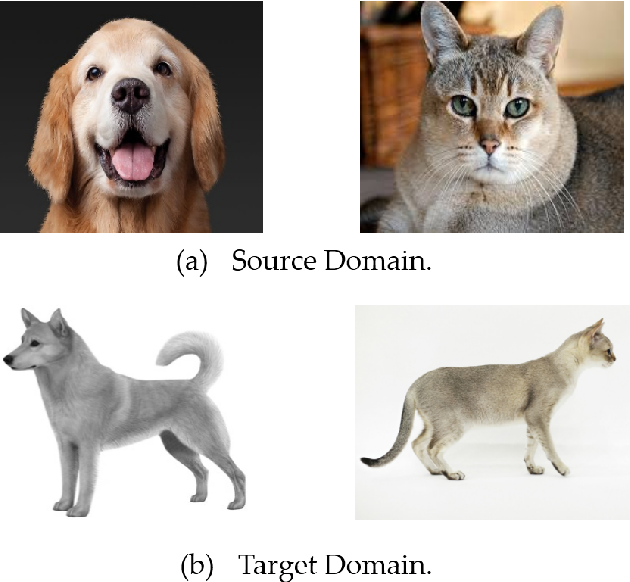 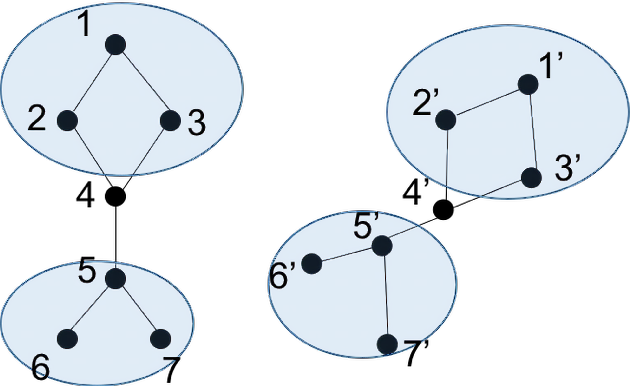 The assumption that training and testing samples are generated from the same distribution does not always hold for real-world machine-learning applications. The procedure of tackling this discrepancy between the training (source) and testing (target) domains is known as domain adaptation. We propose an unsupervised version of domain adaptation that considers the presence of only unlabelled data in the target domain. Our approach centers on finding correspondences between samples of each domain. The correspondences are obtained by treating the source and target samples as graphs and using a convex criterion to match them. The criteria used are first-order and second-order similarities between the graphs as well as a class-based regularization. We have also developed a computationally efficient routine for the convex optimization, thus allowing the proposed method to be used widely. To verify the effectiveness of the proposed method, computer simulations were conducted on synthetic, image classification and sentiment classification datasets. Results validated that the proposed local sample-to-sample matching method out-performs traditional moment-matching methods and is competitive with respect to current local domain-adaptation methods.