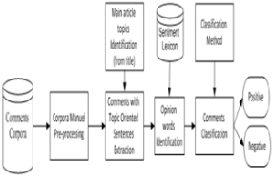 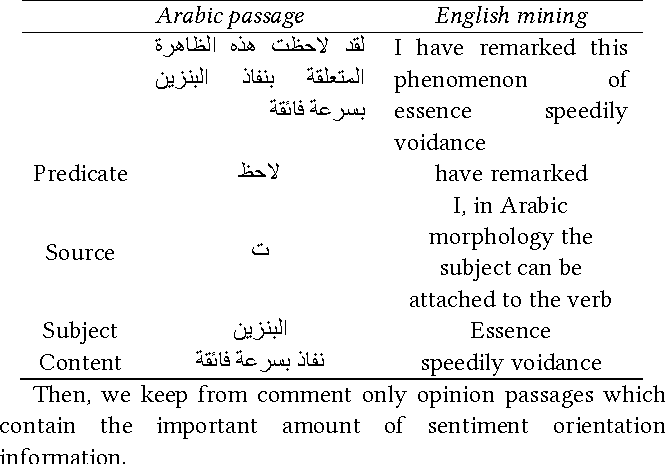 Nowadays, it is no more needed to do an enormous effort to distribute a lot of forms to thousands of people and collect them, then convert this from into electronic format to track people opinion about some subjects. A lot of web sites can today reach a large spectrum with less effort. The majority of web sites suggest to their visitors to leave backups about their feeling of the site or events. So, this makes for us a lot of data which need powerful mean to exploit. Opinion mining in the web becomes more and more an attracting task, due the increasing need for individuals and societies to track the mood of people against several subjects of daily life (sports, politics, television,...). A lot of works in opinion mining was developed in western languages especially English, such works in Arabic language still very scarce. In this paper, we propose our approach, for opinion mining in Arabic Algerian news paper. CCS CONCEPTS $\bullet$Information systems~Sentiment analysis $\bullet$ Computing methodologies~Natural language processing


* ICCES '17: Proceedings of the International Conference on Computing for Engineering and Sciences, Jul 2017, Istanbul, France. pp.35-39 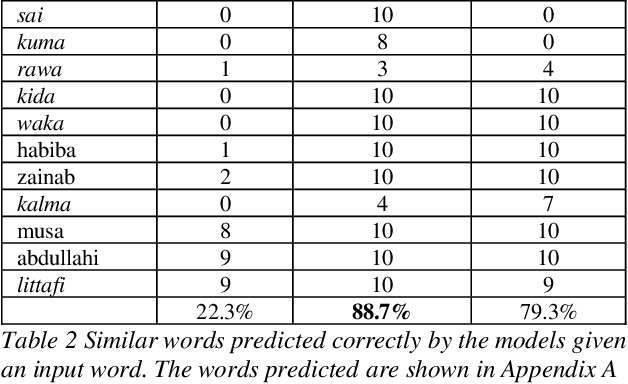 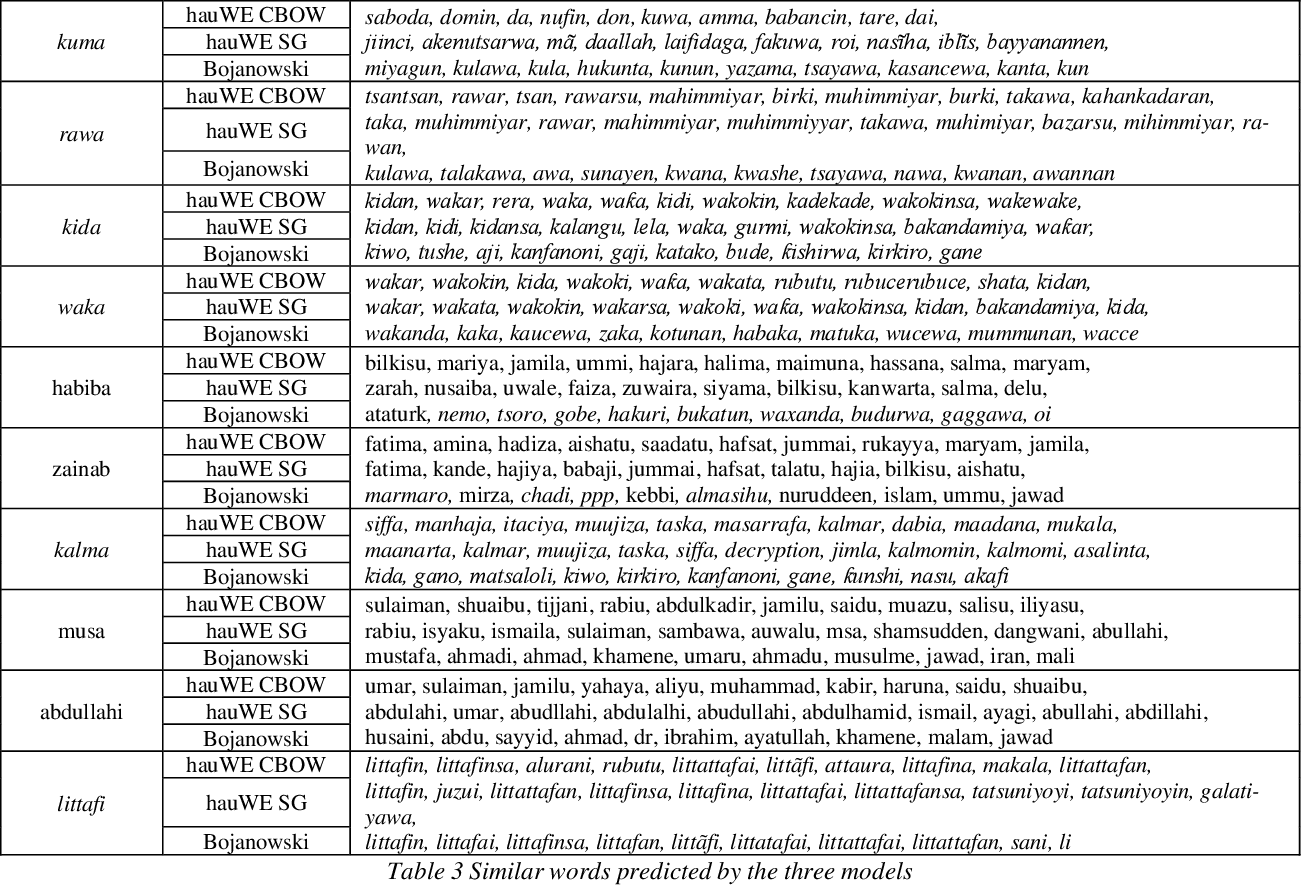 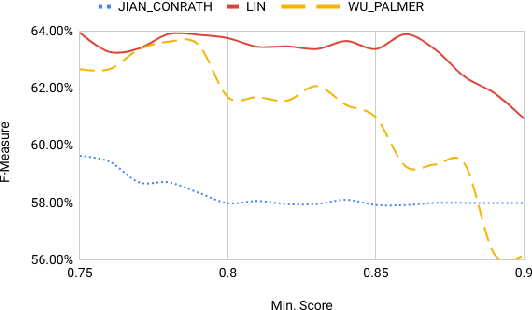 Arguments, counter-arguments, facts, and evidence obtained via documents related to previous court cases are of essential need for legal professionals. Therefore, the process of automatic information extraction from documents containing legal opinions related to court cases can be considered to be of significant importance. This study is focused on the identification of sentences in legal opinion texts which convey different perspectives on a certain topic or entity. We combined several approaches based on semantic analysis, open information extraction, and sentiment analysis to achieve our objective. Then, our methodology was evaluated with the help of human judges. The outcomes of the evaluation demonstrate that our system is successful in detecting situations where two sentences deliver different opinions on the same topic or entity. The proposed methodology can be used to facilitate other information extraction tasks related to the legal domain. One such task is the automated detection of counter arguments for a given argument. Another is the identification of opponent parties in a court case.

Modern deep transfer learning approaches have mainly focused on learning generic feature vectors from one task that are transferable to other tasks, such as word embeddings in language and pretrained convolutional features in vision. However, these approaches usually transfer unary features and largely ignore more structured graphical representations. This work explores the possibility of learning generic latent relational graphs that capture dependencies between pairs of data units (e.g., words or pixels) from large-scale unlabeled data and transferring the graphs to downstream tasks. Our proposed transfer learning framework improves performance on various tasks including question answering, natural language inference, sentiment analysis, and image classification. We also show that the learned graphs are generic enough to be transferred to different embeddings on which the graphs have not been trained (including GloVe embeddings, ELMo embeddings, and task-specific RNN hidden unit), or embedding-free units such as image pixels.

Social media users often make explicit predictions about upcoming events. Such statements vary in the degree of certainty the author expresses toward the outcome:"Leonardo DiCaprio will win Best Actor" vs. "Leonardo DiCaprio may win" or "No way Leonardo wins!". Can popular beliefs on social media predict who will win? To answer this question, we build a corpus of tweets annotated for veridicality on which we train a log-linear classifier that detects positive veridicality with high precision. We then forecast uncertain outcomes using the wisdom of crowds, by aggregating users' explicit predictions. Our method for forecasting winners is fully automated, relying only on a set of contenders as input. It requires no training data of past outcomes and outperforms sentiment and tweet volume baselines on a broad range of contest prediction tasks. We further demonstrate how our approach can be used to measure the reliability of individual accounts' predictions and retrospectively identify surprise outcomes.

A Generative Model of Group Conversation 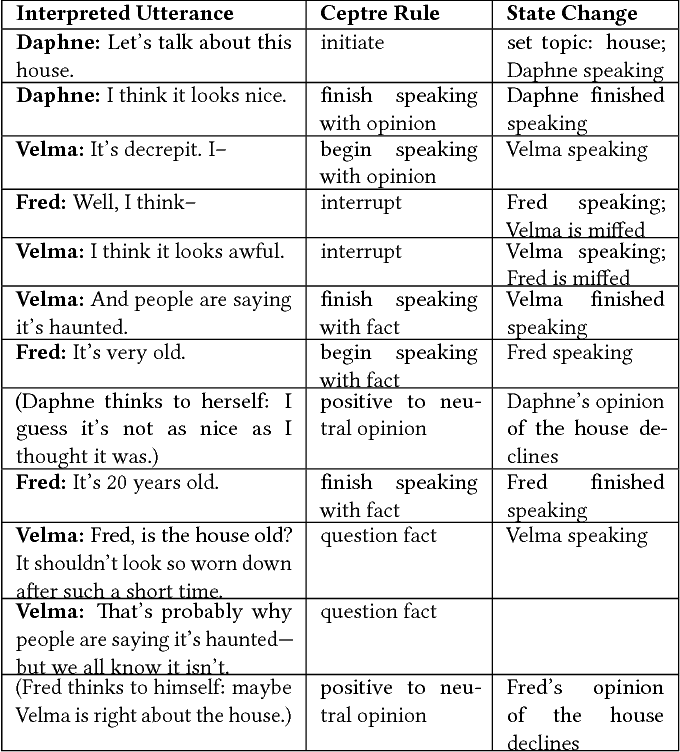 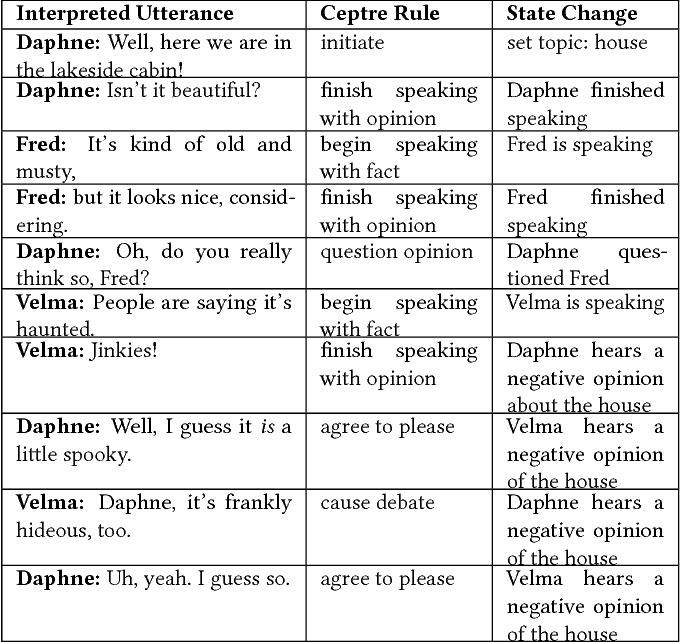 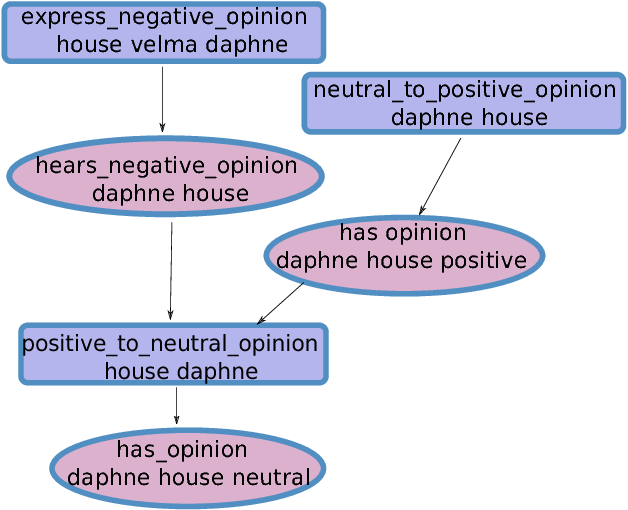 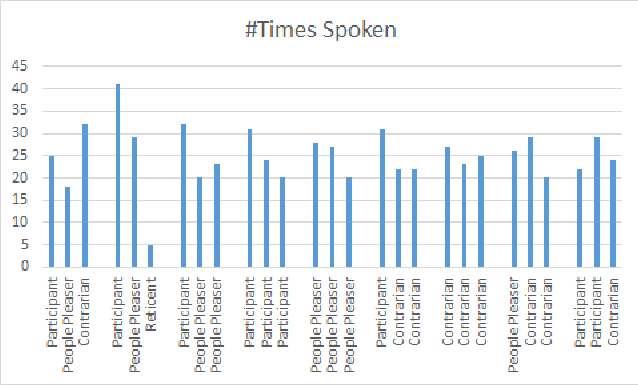 Conversations with non-player characters (NPCs) in games are typically confined to dialogue between a human player and a virtual agent, where the conversation is initiated and controlled by the player. To create richer, more believable environments for players, we need conversational behavior to reflect initiative on the part of the NPCs, including conversations that include multiple NPCs who interact with one another as well as the player. We describe a generative computational model of group conversation between agents, an abstract simulation of discussion in a small group setting. We define conversational interactions in terms of rules for turn taking and interruption, as well as belief change, sentiment change, and emotional response, all of which are dependent on agent personality, context, and relationships. We evaluate our model using a parameterized expressive range analysis, observing correlations between simulation parameters and features of the resulting conversations. This analysis confirms, for example, that character personalities will predict how often they speak, and that heterogeneous groups of characters will generate more belief change. 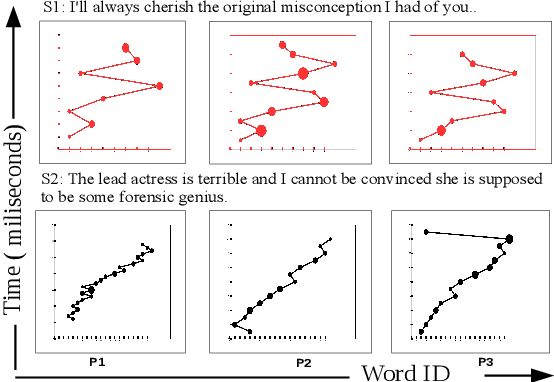 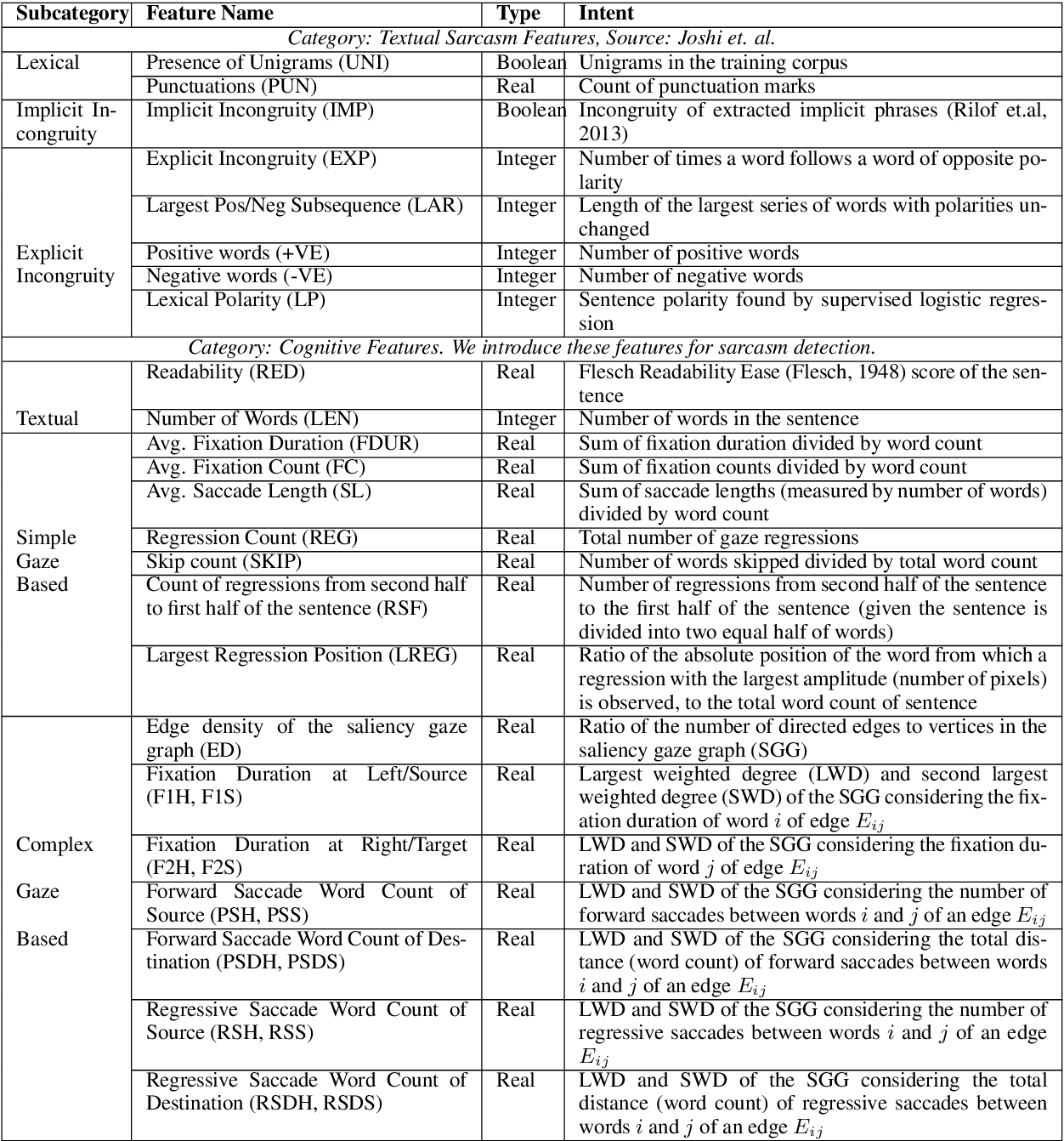 In this paper, we propose a novel mechanism for enriching the feature vector, for the task of sarcasm detection, with cognitive features extracted from eye-movement patterns of human readers. Sarcasm detection has been a challenging research problem, and its importance for NLP applications such as review summarization, dialog systems and sentiment analysis is well recognized. Sarcasm can often be traced to incongruity that becomes apparent as the full sentence unfolds. This presence of incongruity- implicit or explicit- affects the way readers eyes move through the text. We observe the difference in the behaviour of the eye, while reading sarcastic and non sarcastic sentences. Motivated by his observation, we augment traditional linguistic and stylistic features for sarcasm detection with the cognitive features obtained from readers eye movement data. We perform statistical classification using the enhanced feature set so obtained. The augmented cognitive features improve sarcasm detection by 3.7% (in terms of F-score), over the performance of the best reported system. 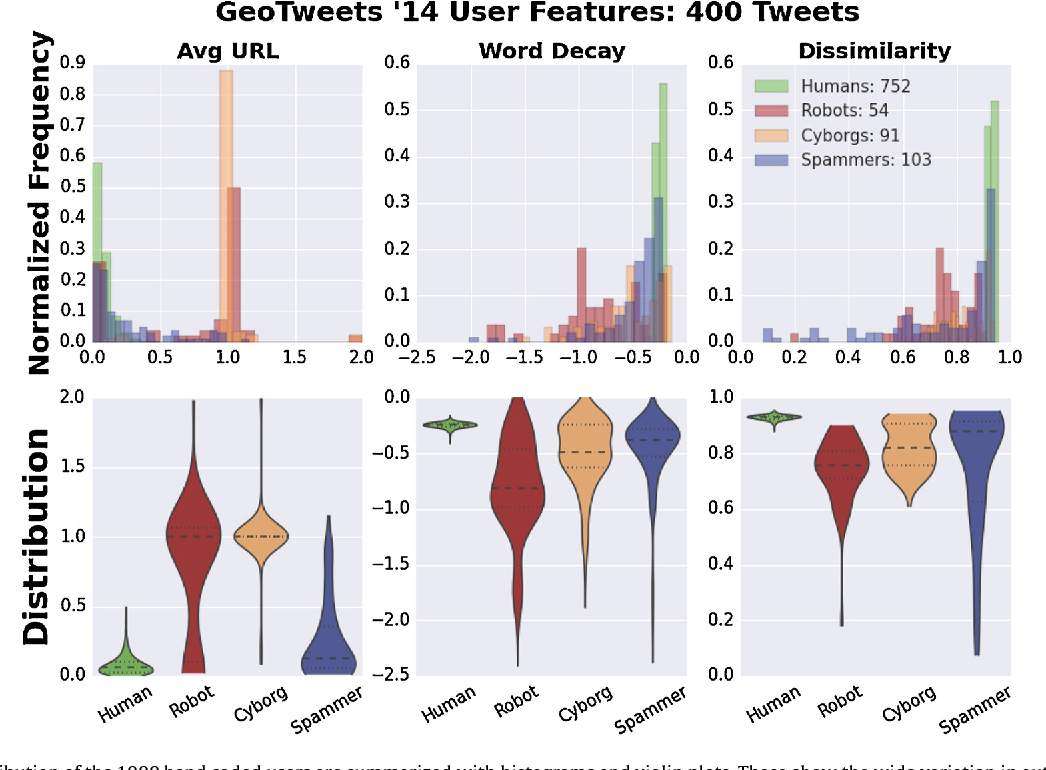 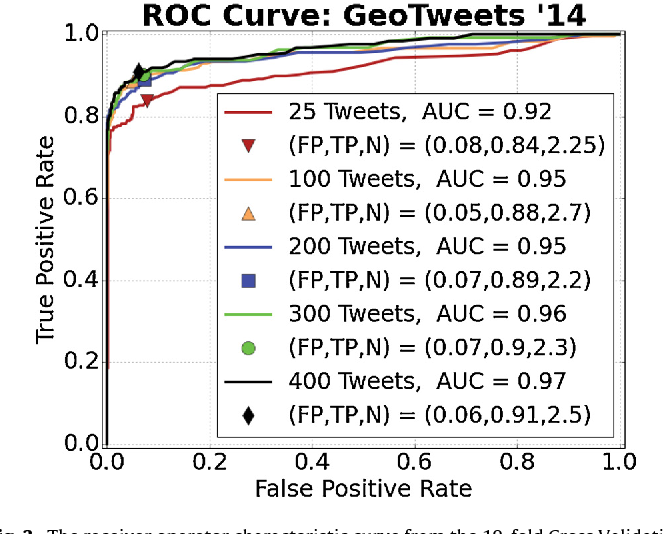 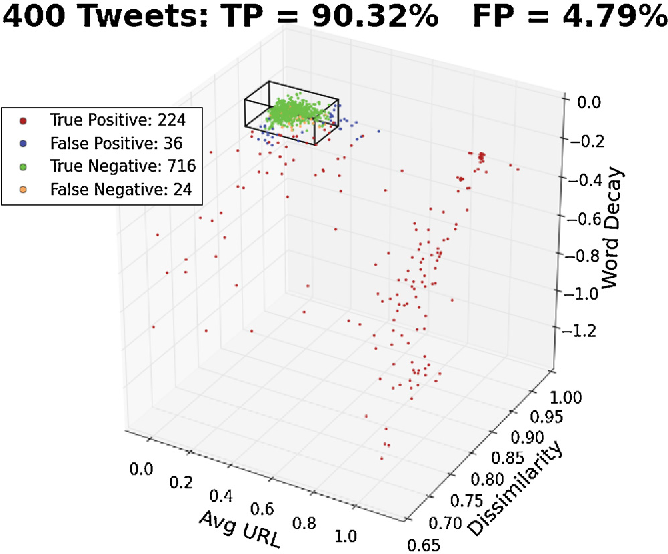 Twitter, a popular social media outlet, has evolved into a vast source of linguistic data, rich with opinion, sentiment, and discussion. Due to the increasing popularity of Twitter, its perceived potential for exerting social influence has led to the rise of a diverse community of automatons, commonly referred to as bots. These inorganic and semi-organic Twitter entities can range from the benevolent (e.g., weather-update bots, help-wanted-alert bots) to the malevolent (e.g., spamming messages, advertisements, or radical opinions). Existing detection algorithms typically leverage meta-data (time between tweets, number of followers, etc.) to identify robotic accounts. Here, we present a powerful classification scheme that exclusively uses the natural language text from organic users to provide a criterion for identifying accounts posting automated messages. Since the classifier operates on text alone, it is flexible and may be applied to any textual data beyond the Twitter-sphere. 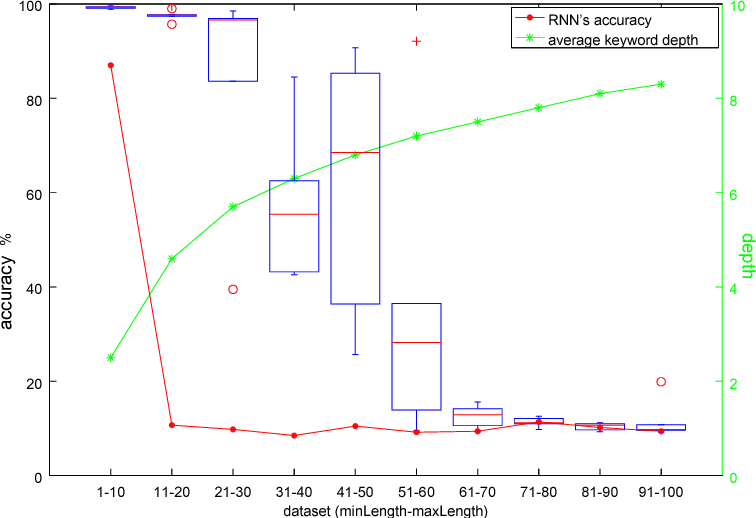 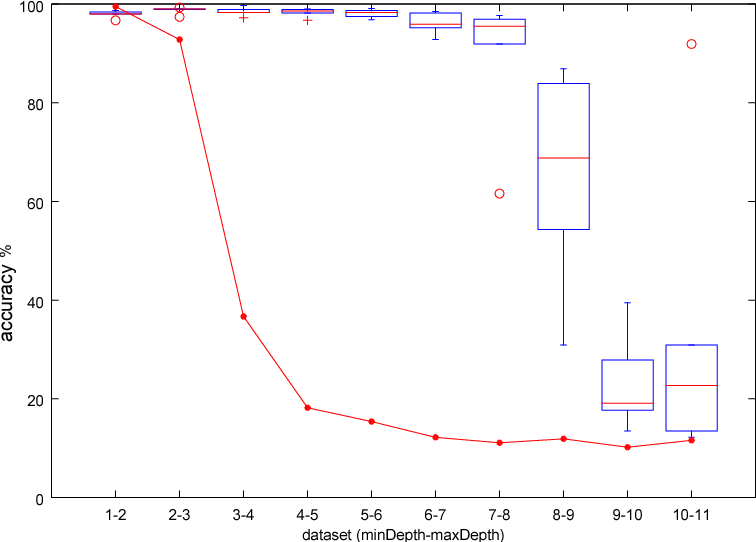 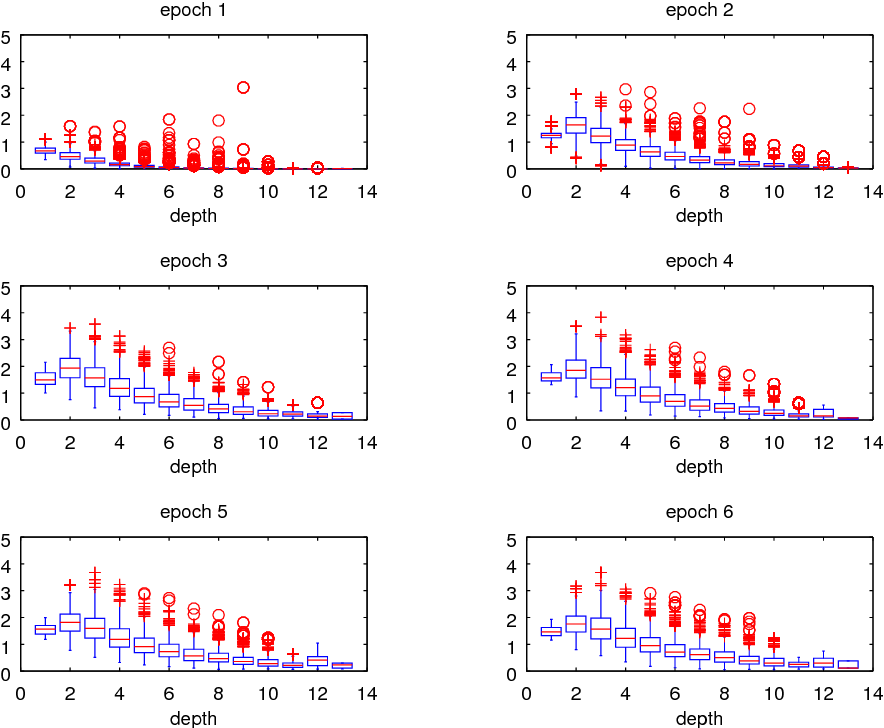 Recursive neural networks (RNN) and their recently proposed extension recursive long short term memory networks (RLSTM) are models that compute representations for sentences, by recursively combining word embeddings according to an externally provided parse tree. Both models thus, unlike recurrent networks, explicitly make use of the hierarchical structure of a sentence. In this paper, we demonstrate that RNNs nevertheless suffer from the vanishing gradient and long distance dependency problem, and that RLSTMs greatly improve over RNN's on these problems. We present an artificial learning task that allows us to quantify the severity of these problems for both models. We further show that a ratio of gradients (at the root node and a focal leaf node) is highly indicative of the success of backpropagation at optimizing the relevant weights low in the tree. This paper thus provides an explanation for existing, superior results of RLSTMs on tasks such as sentiment analysis, and suggests that the benefits of including hierarchical structure and of including LSTM-style gating are complementary.