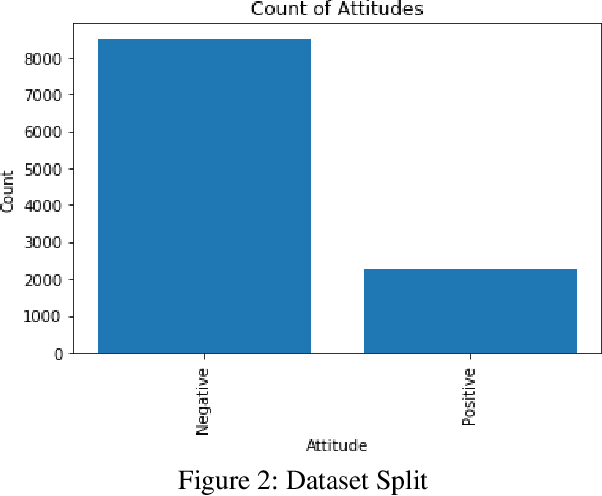 LSTM or Long Short Term Memory Networks is a specific type of Recurrent Neural Network (RNN) that is very effective in dealing with long sequence data and learning long term dependencies. In this work, we perform sentiment analysis on a GOP Debate Twitter dataset. To speed up training and reduce the computational cost and time, six different parameter reduced slim versions of the LSTM model (slim LSTM) are proposed. We evaluate two of these models on the dataset. The performance of these two LSTM models along with the standard LSTM model is compared. The effect of Bidirectional LSTM Layers is also studied. The work also consists of a study to choose the best architecture, apart from establishing the best set of hyper parameters for different LSTM Models. 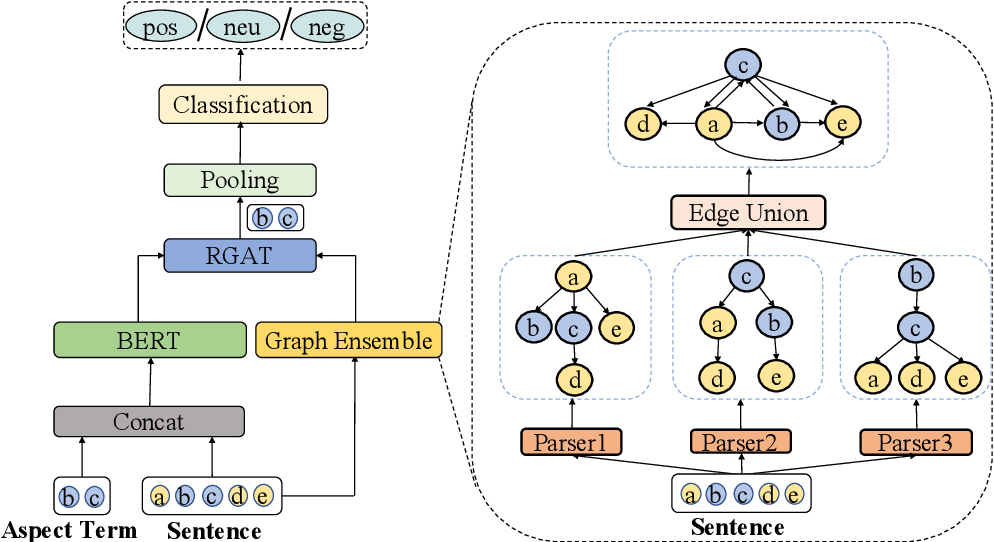 Recent work on aspect-level sentiment classification has demonstrated the efficacy of incorporating syntactic structures such as dependency trees with graph neural networks(GNN), but these approaches are usually vulnerable to parsing errors. To better leverage syntactic information in the face of unavoidable errors, we propose a simple yet effective graph ensemble technique, GraphMerge, to make use of the predictions from differ-ent parsers. Instead of assigning one set of model parameters to each dependency tree, we first combine the dependency relations from different parses before applying GNNs over the resulting graph. This allows GNN mod-els to be robust to parse errors at no additional computational cost, and helps avoid overparameterization and overfitting from GNN layer stacking by introducing more connectivity into the ensemble graph. Our experiments on the SemEval 2014 Task 4 and ACL 14 Twitter datasets show that our GraphMerge model not only outperforms models with single dependency tree, but also beats other ensemble mod-els without adding model parameters. 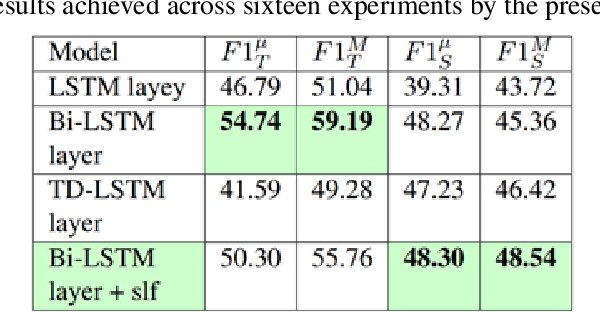 Humor is a natural and fundamental component of human interactions. When correctly applied, humor allows us to express thoughts and feelings conveniently and effectively, increasing interpersonal affection, likeability, and trust. However, understanding the use of humor is a computationally challenging task from the perspective of humor-aware language processing models. As language models become ubiquitous through virtual-assistants and IOT devices, the need to develop humor-aware models rises exponentially. To further improve the state-of-the-art capacity to perform this particular sentiment-analysis task we must explore models that incorporate contextualized and nonverbal elements in their design. Ideally, we seek architectures accepting non-verbal elements as additional embedded inputs to the model, alongside the original sentence-embedded input. This survey thus analyses the current state of research in techniques for improved contextualized embedding incorporating nonverbal information, as well as newly proposed deep architectures to improve context retention on top of popular word-embeddings methods. 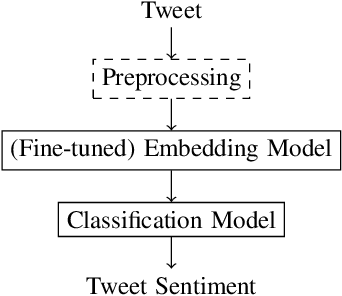 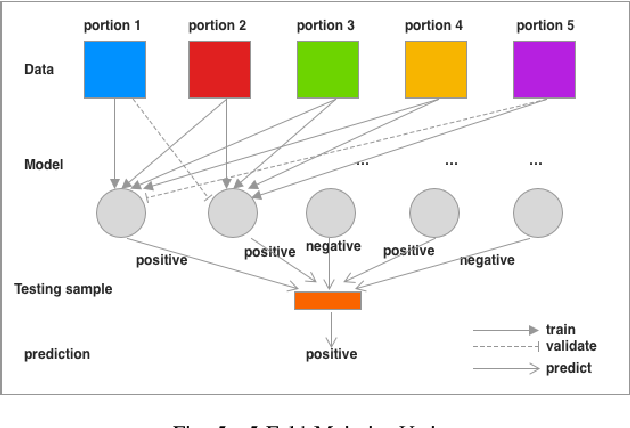 This paper introduces a study on tweet sentiment classification. Our task is to classify a tweet as either positive or negative. We approach the problem in two steps, namely embedding and classifying. Our baseline methods include several combinations of traditional embedding methods and classification algorithms. Furthermore, we explore the current state-of-the-art tweet analysis model, BERTweet, and propose a novel approach in which features are engineered from the hidden states and attention matrices of the model, inspired by empirical study of the tweets. Using a multi-layer perceptron trained with a high dropout rate for classification, our proposed approach achieves a validation accuracy of 0.9111.

This paper describes our multi-view ensemble approach to SemEval-2017 Task 4 on Sentiment Analysis in Twitter, specifically, the Message Polarity Classification subtask for English (subtask A). Our system is a voting ensemble, where each base classifier is trained in a different feature space. The first space is a bag-of-words model and has a Linear SVM as base classifier. The second and third spaces are two different strategies of combining word embeddings to represent sentences and use a Linear SVM and a Logistic Regressor as base classifiers. The proposed system was ranked 18th out of 38 systems considering F1 score and 20th considering recall. 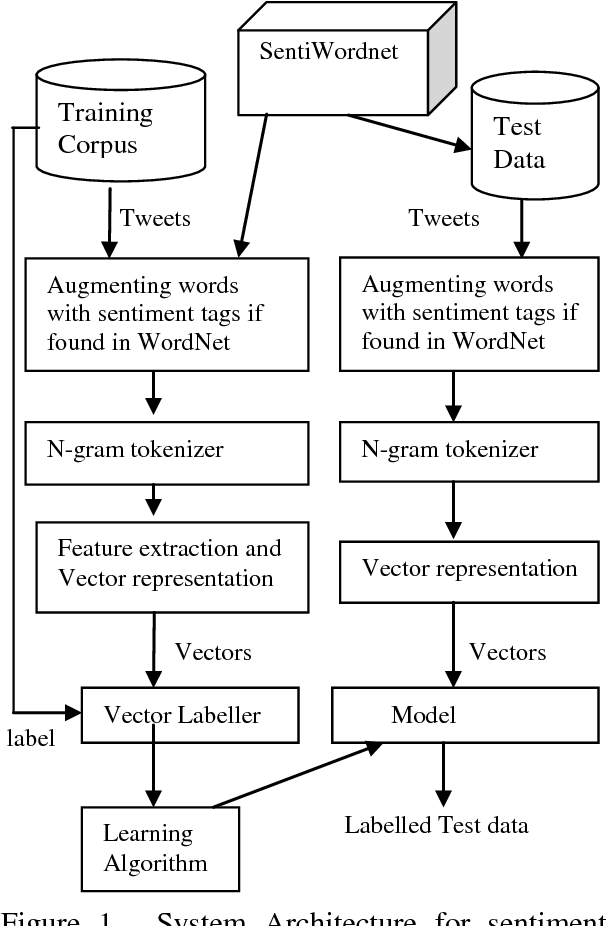 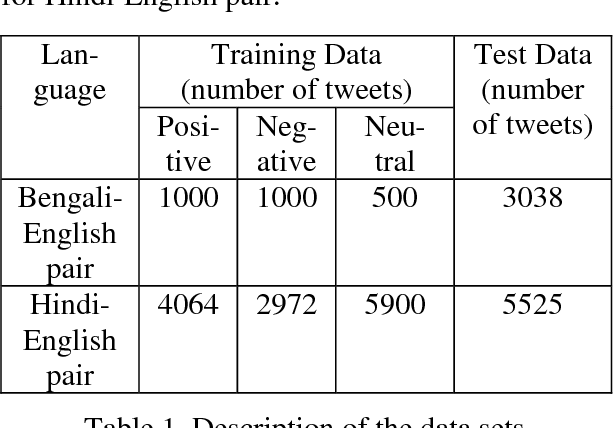 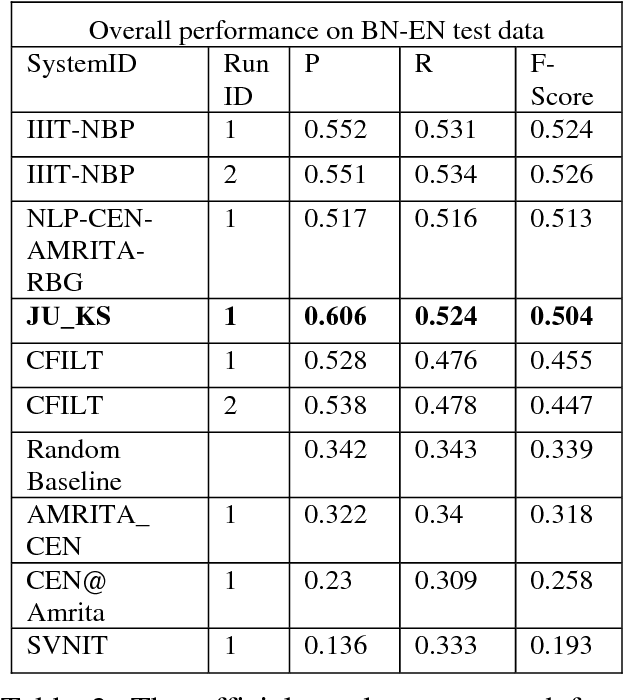 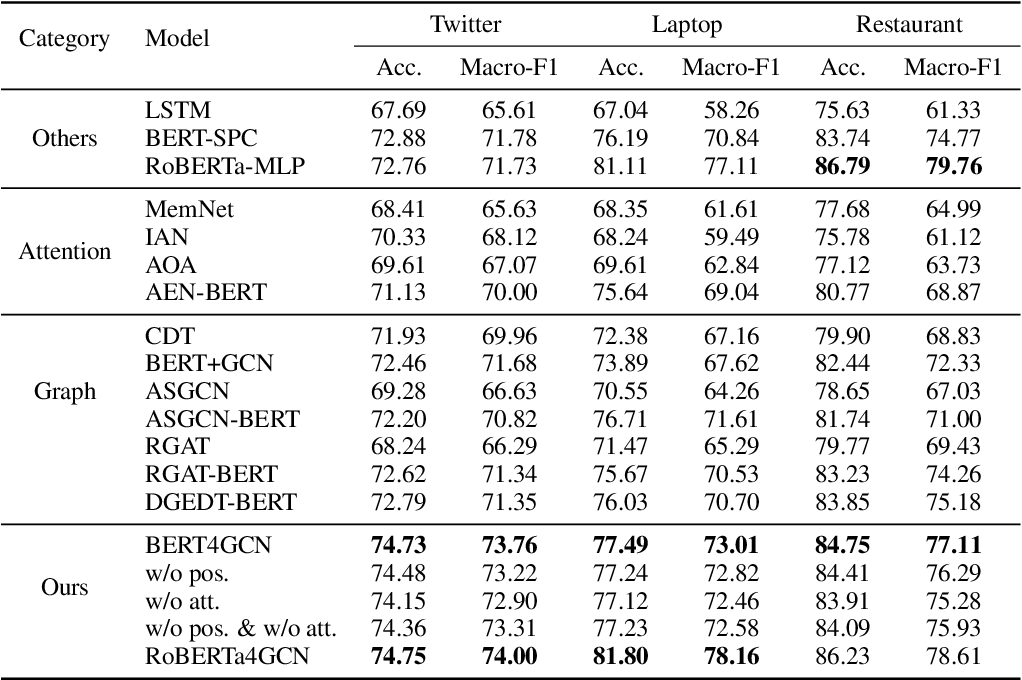 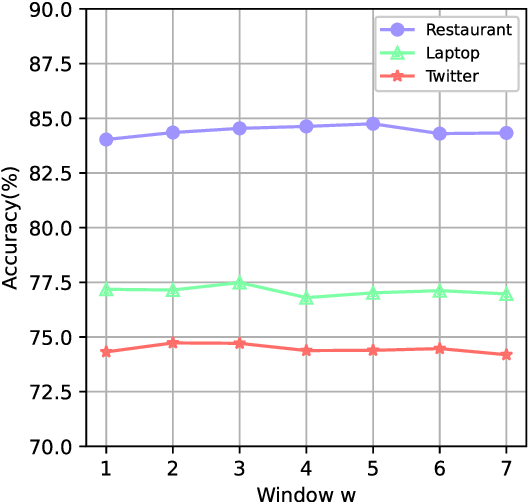 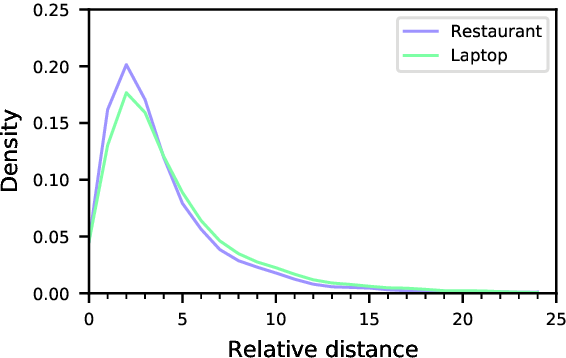 Graph-based Aspect-based Sentiment Classification (ABSC) approaches have yielded state-of-the-art results, expecially when equipped with contextual word embedding from pre-training language models (PLMs). However, they ignore sequential features of the context and have not yet made the best of PLMs. In this paper, we propose a novel model, BERT4GCN, which integrates the grammatical sequential features from the PLM of BERT, and the syntactic knowledge from dependency graphs. BERT4GCN utilizes outputs from intermediate layers of BERT and positional information between words to augment GCN (Graph Convolutional Network) to better encode the dependency graphs for the downstream classification. Experimental results demonstrate that the proposed BERT4GCN outperforms all state-of-the-art baselines, justifying that augmenting GCN with the grammatical features from intermediate layers of BERT can significantly empower ABSC models.

For multiple aspects scenario of aspect-based sentiment analysis (ABSA), existing approaches typically ignore inter-aspect relations or rely on temporal dependencies to process aspect-aware representations of all aspects in a sentence. Although multiple aspects of a sentence appear in a non-adjacent sequential order, they are not in a strict temporal relationship as natural language sequence, thus the aspect-aware sentence representations should not be treated as temporal dependency processing. In this paper, we propose a novel non-temporal mechanism to enhance the ABSA task through modeling inter-aspect dependencies. Furthermore, we focus on the well-known class imbalance issue on the ABSA task and address it by down-weighting the loss assigned to well-classified instances. Experiments on two distinct domains of SemEval 2014 task 4 demonstrate the effectiveness of our proposed approach. 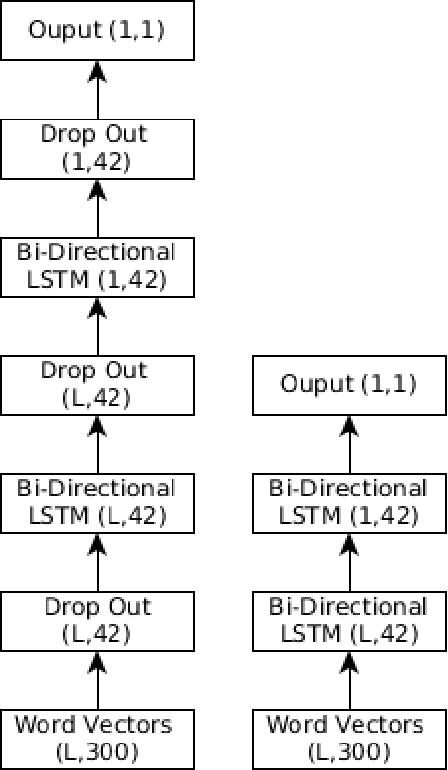 This paper describes our participation in Task 5 track 2 of SemEval 2017 to predict the sentiment of financial news headlines for a specific company on a continuous scale between -1 and 1. We tackled the problem using a number of approaches, utilising a Support Vector Regression (SVR) and a Bidirectional Long Short-Term Memory (BLSTM). We found an improvement of 4-6% using the LSTM model over the SVR and came fourth in the track. We report a number of different evaluations using a finance specific word embedding model and reflect on the effects of using different evaluation metrics.


* 5 pages, to Appear in the Proceedings of the 11th International Workshop on Semantic Evaluation (SemEval 2017), August 2017, Vancouver, BC

Covid-19 Discourse on Twitter: How the Topics, Sentiments, Subjectivity, and Figurative Frames Changed Over Time 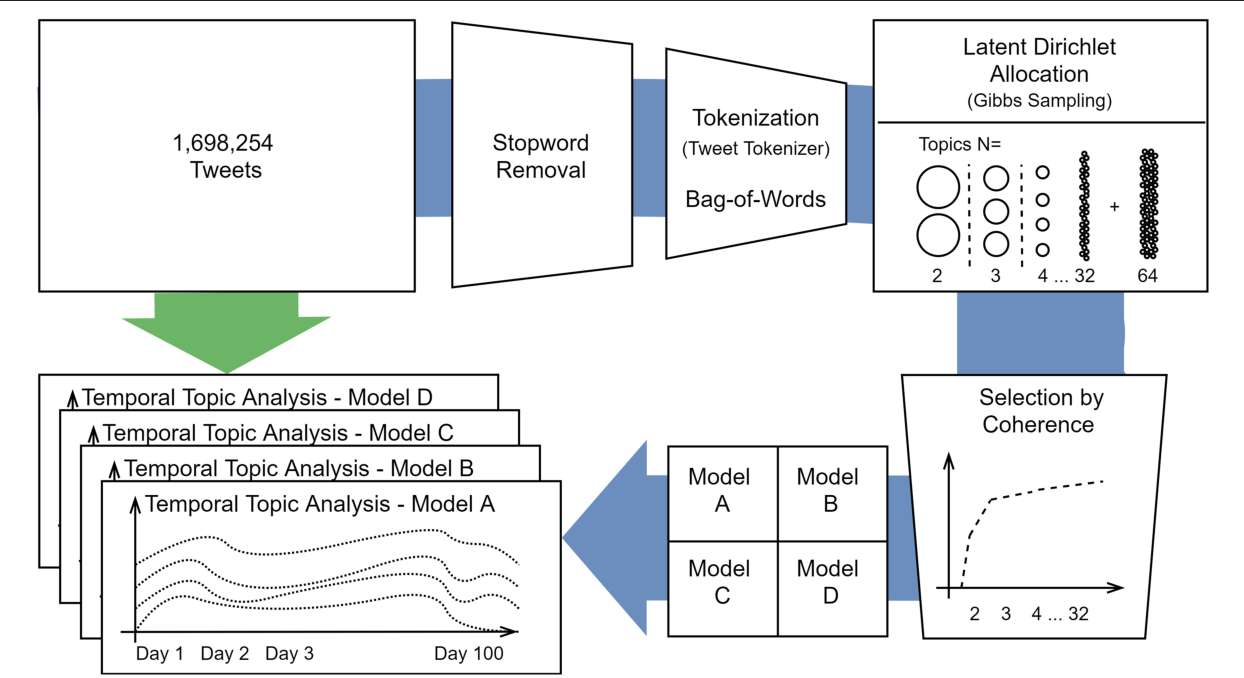 The words we use to talk about the current epidemiological crisis on social media can inform us on how we are conceptualizing the pandemic and how we are reacting to its development. This paper provides an extensive explorative analysis of how the discourse about Covid-19 reported on Twitter changes through time, focusing on the first wave of this pandemic. Based on an extensive corpus of tweets (produced between 20th March and 1st July 2020) first we show how the topics associated with the development of the pandemic changed through time, using topic modeling. Second, we show how the sentiment polarity of the language used in the tweets changed from a relatively positive valence during the first lockdown, toward a more negative valence in correspondence with the reopening. Third we show how the average subjectivity of the tweets increased linearly and fourth, how the popular and frequently used figurative frame of WAR changed when real riots and fights entered the discourse.