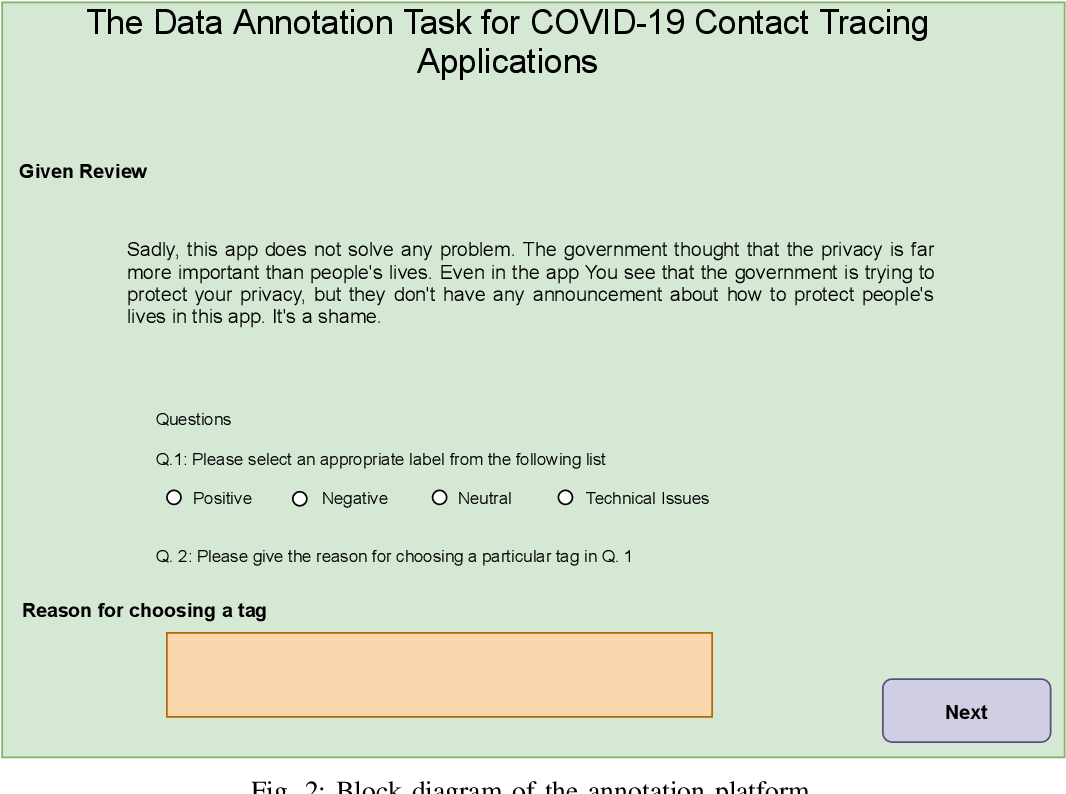 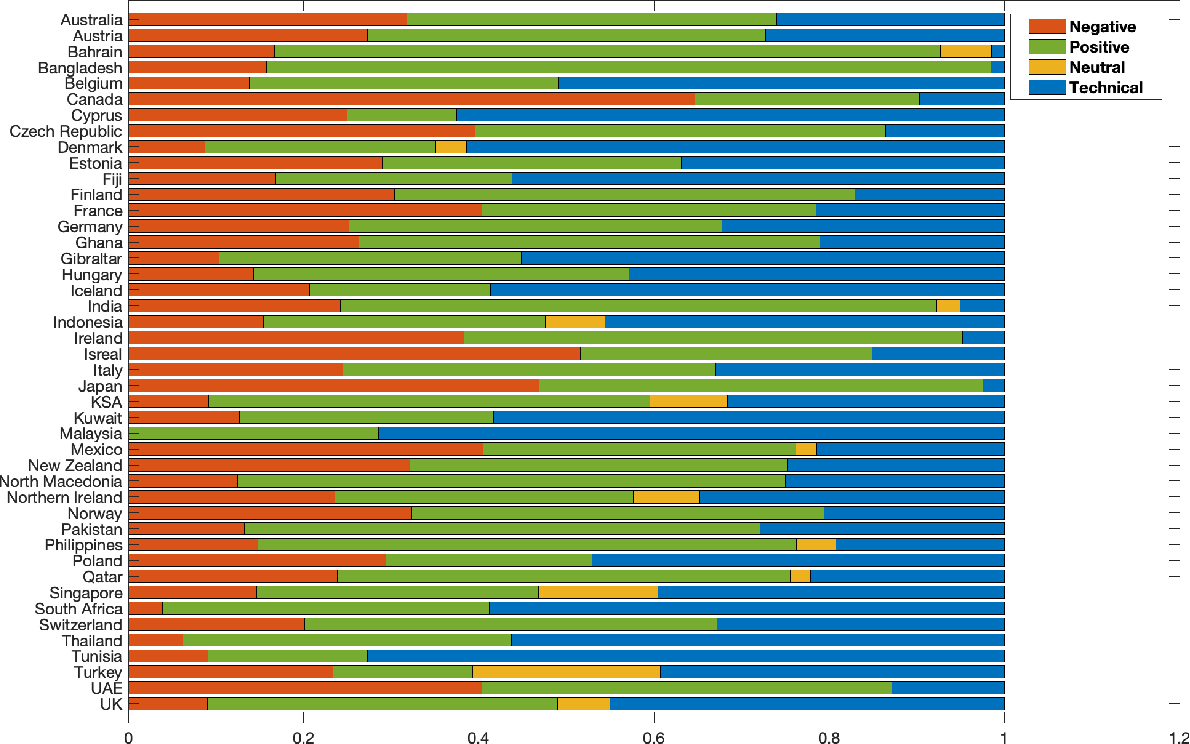 Contact tracing has been globally adopted in the fight to control the infection rate of COVID-19. Thanks to digital technologies, such as smartphones and wearable devices, contacts of COVID-19 patients can be easily traced and informed about their potential exposure to the virus. To this aim, several interesting mobile applications have been developed. However, there are ever-growing concerns over the working mechanism and performance of these applications. The literature already provides some interesting exploratory studies on the community's response to the applications by analyzing information from different sources, such as news and users' reviews of the applications. However, to the best of our knowledge, there is no existing solution that automatically analyzes users' reviews and extracts the evoked sentiments. In this work, we propose a pipeline starting from manual annotation via a crowd-sourcing study and concluding on the development and training of AI models for automatic sentiment analysis of users' reviews. In total, we employ eight different methods achieving up to an average F1-Scores 94.8% indicating the feasibility of automatic sentiment analysis of users' reviews on the COVID-19 contact tracing applications. We also highlight the key advantages, drawbacks, and users' concerns over the applications. Moreover, we also collect and annotate a large-scale dataset composed of 34,534 reviews manually annotated from the contract tracing applications of 46 distinct countries. The presented analysis and the dataset are expected to provide a baseline/benchmark for future research in the domain. 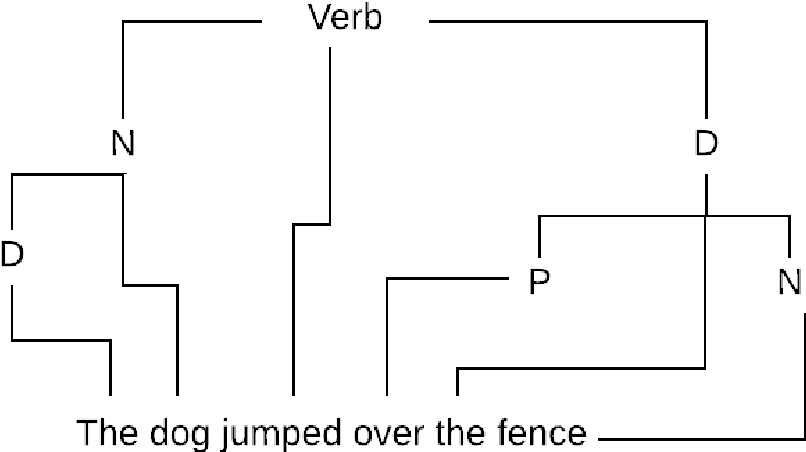 Recent advances in Big Data has prompted health care practitioners to utilize the data available on social media to discern sentiment and emotions expression. Health Informatics and Clinical Analytics depend heavily on information gathered from diverse sources. Traditionally, a healthcare practitioner will ask a patient to fill out a questionnaire that will form the basis of diagnosing the medical condition. However, medical practitioners have access to many sources of data including the patients writings on various media. Natural Language Processing (NLP) allows researchers to gather such data and analyze it to glean the underlying meaning of such writings. The field of sentiment analysis (applied to many other domains) depend heavily on techniques utilized by NLP. This work will look into various prevalent theories underlying the NLP field and how they can be leveraged to gather users sentiments on social media. Such sentiments can be culled over a period of time thus minimizing the errors introduced by data input and other stressors. Furthermore, we look at some applications of sentiment analysis and application of NLP to mental health. The reader will also learn about the NLTK toolkit that implements various NLP theories and how they can make the data scavenging process a lot easier.

Sentiment Analysis of code-mixed text has diversified applications in opinion mining ranging from tagging user reviews to identifying social or political sentiments of a sub-population. In this paper, we present an ensemble architecture of convolutional neural net (CNN) and self-attention based LSTM for sentiment analysis of code-mixed tweets. While the CNN component helps in the classification of positive and negative tweets, the self-attention based LSTM, helps in the classification of neutral tweets, because of its ability to identify correct sentiment among multiple sentiment bearing units. We achieved F1 scores of 0.707 (ranked 5th) and 0.725 (ranked 13th) on Hindi-English (Hinglish) and Spanish-English (Spanglish) datasets, respectively. The submissions for Hinglish and Spanglish tasks were made under the usernames ayushk and harsh_6 respectively. 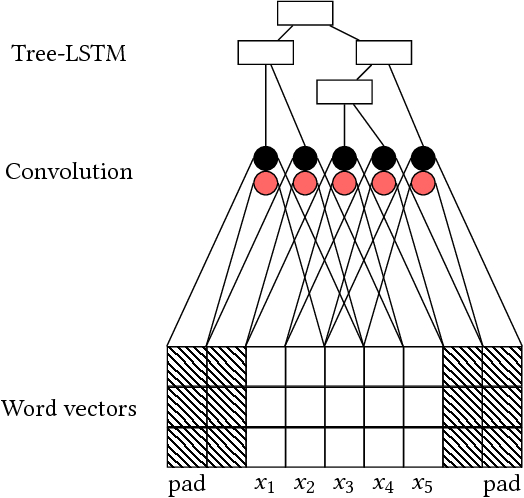 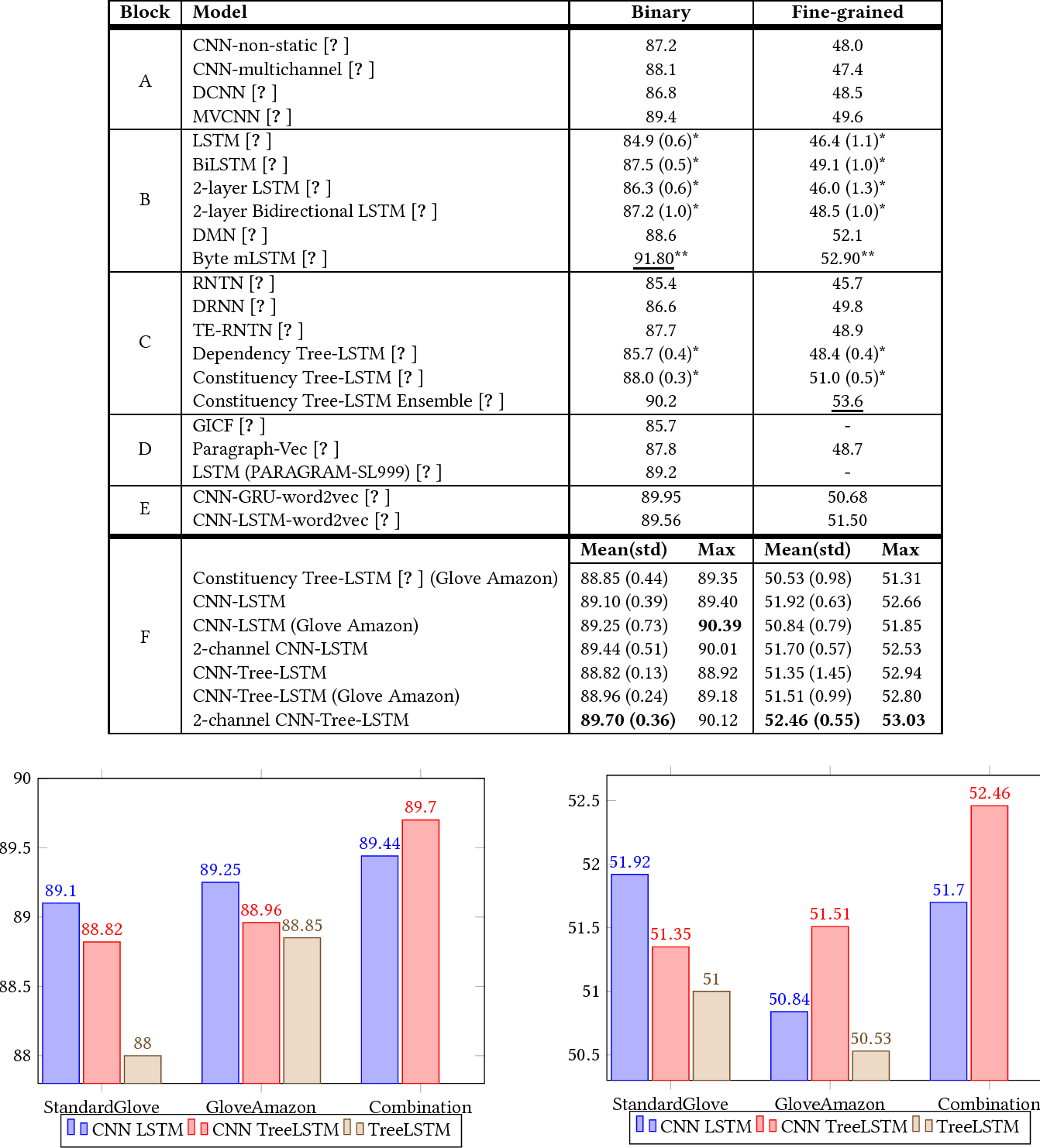 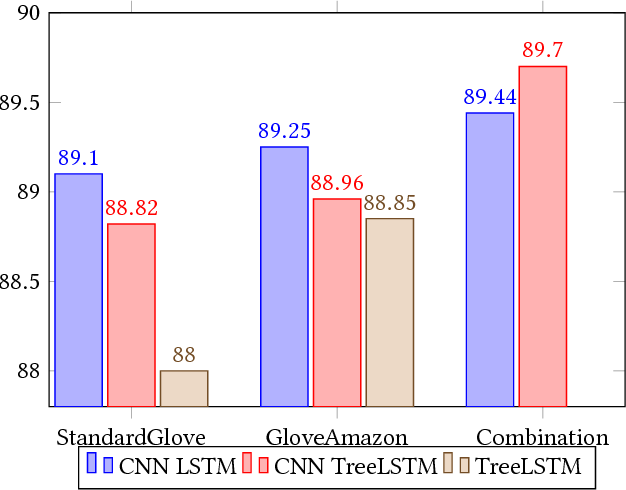 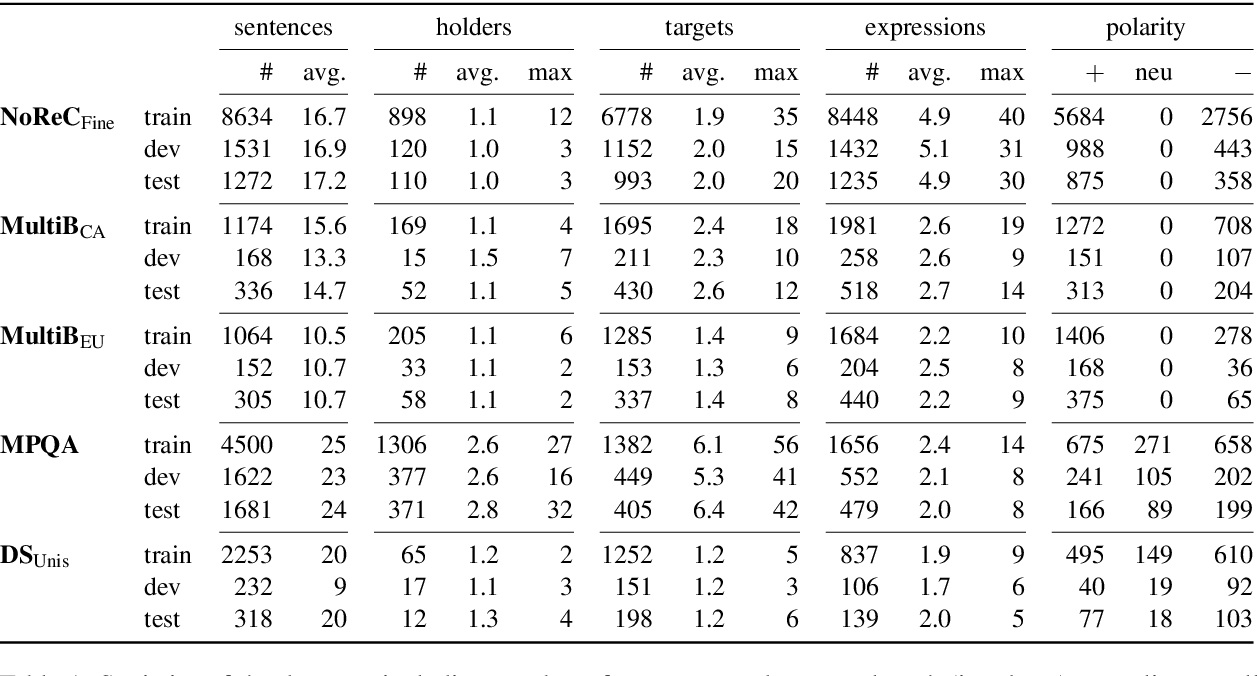 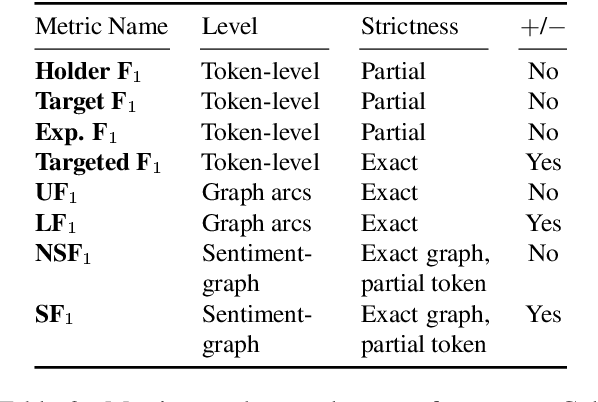 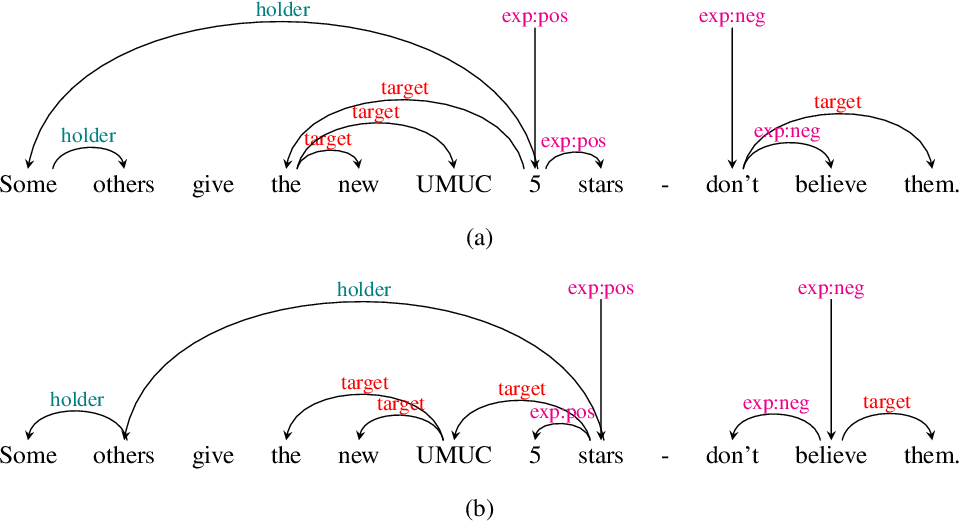 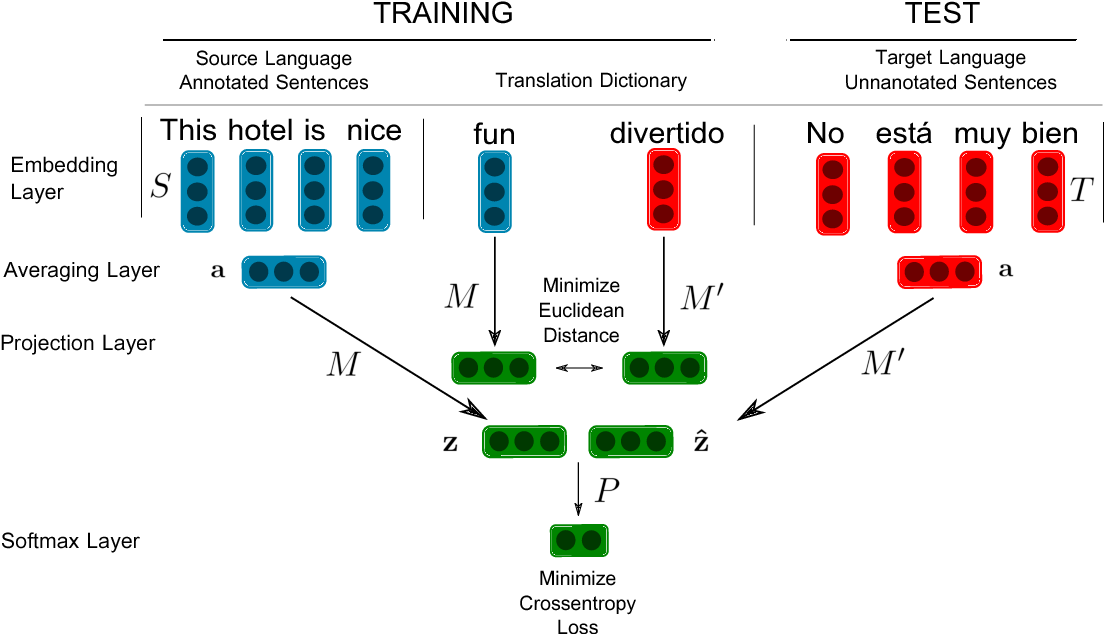 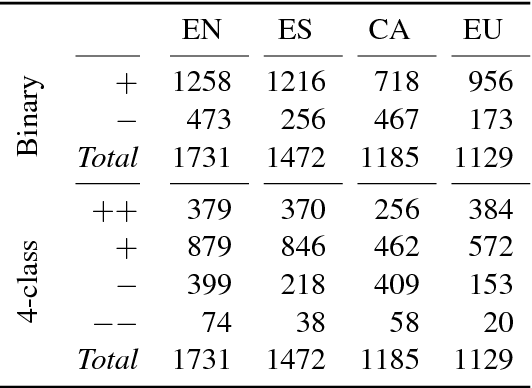 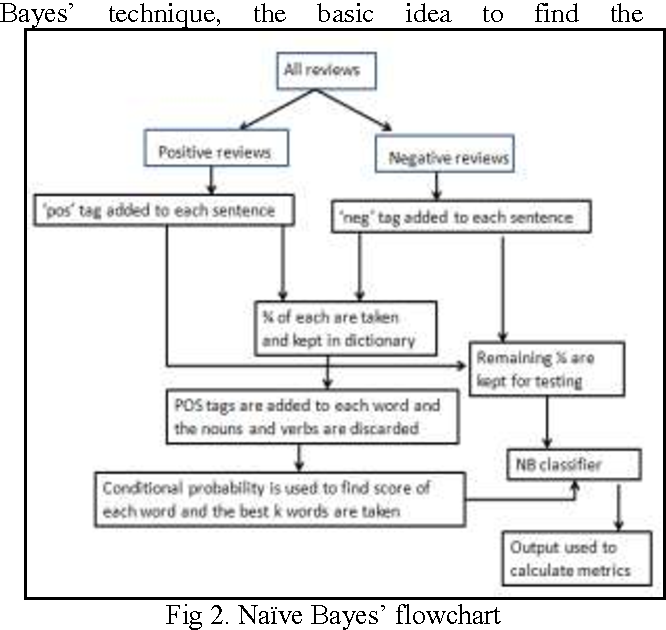 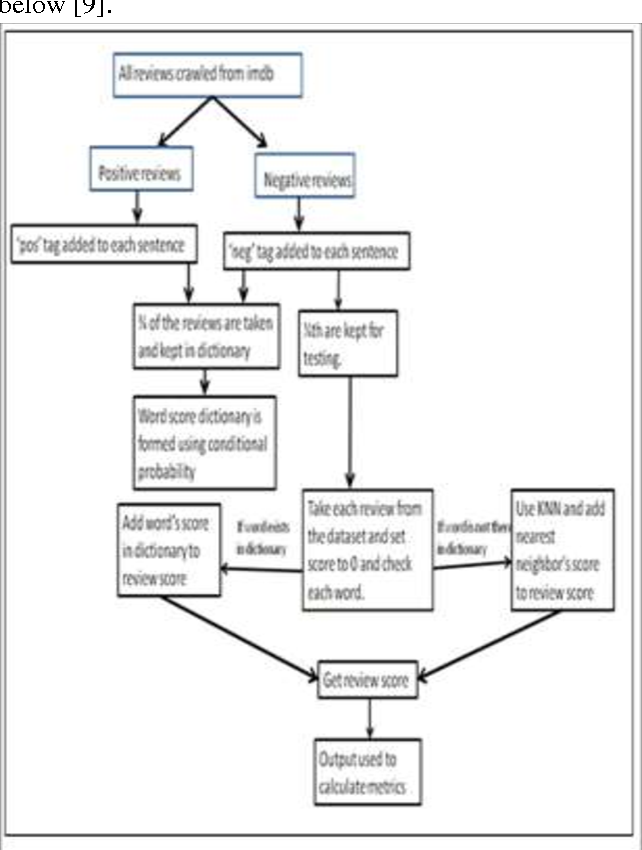 The advent of Web 2.0 has led to an increase in the amount of sentimental content available in the Web. Such content is often found in social media web sites in the form of movie or product reviews, user comments, testimonials, messages in discussion forums etc. Timely discovery of the sentimental or opinionated web content has a number of advantages, the most important of all being monetization. Understanding of the sentiments of human masses towards different entities and products enables better services for contextual advertisements, recommendation systems and analysis of market trends. The focus of our project is sentiment focussed web crawling framework to facilitate the quick discovery of sentimental contents of movie reviews and hotel reviews and analysis of the same. We use statistical methods to capture elements of subjective style and the sentence polarity. The paper elaborately discusses two supervised machine learning algorithms: K-Nearest Neighbour(K-NN) and Naive Bayes and compares their overall accuracy, precisions as well as recall values. It was seen that in case of movie reviews Naive Bayes gave far better results than K-NN but for hotel reviews these algorithms gave lesser, almost same accuracies.

Examination of community sentiment dynamics due to covid-19 pandemic: a case study from Australia 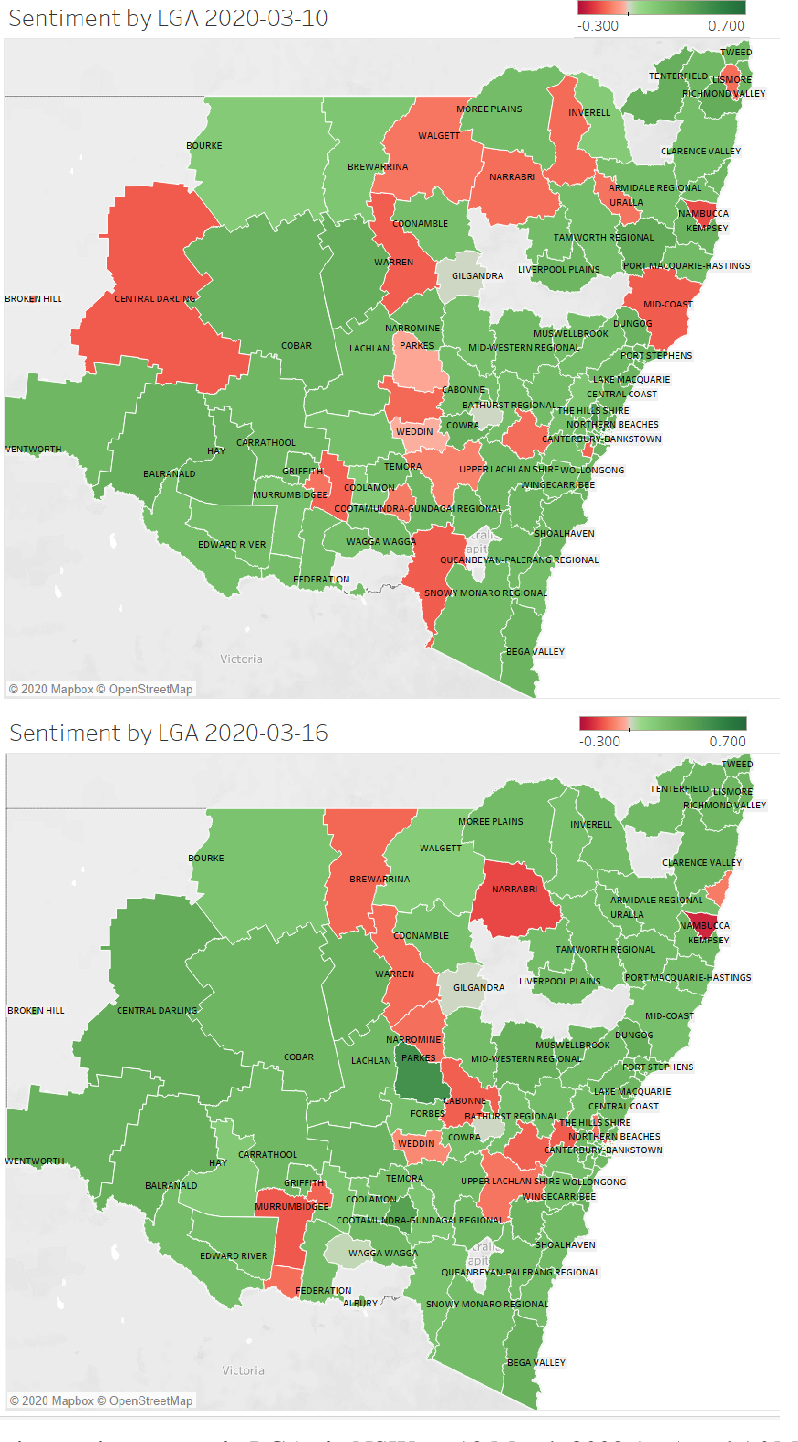 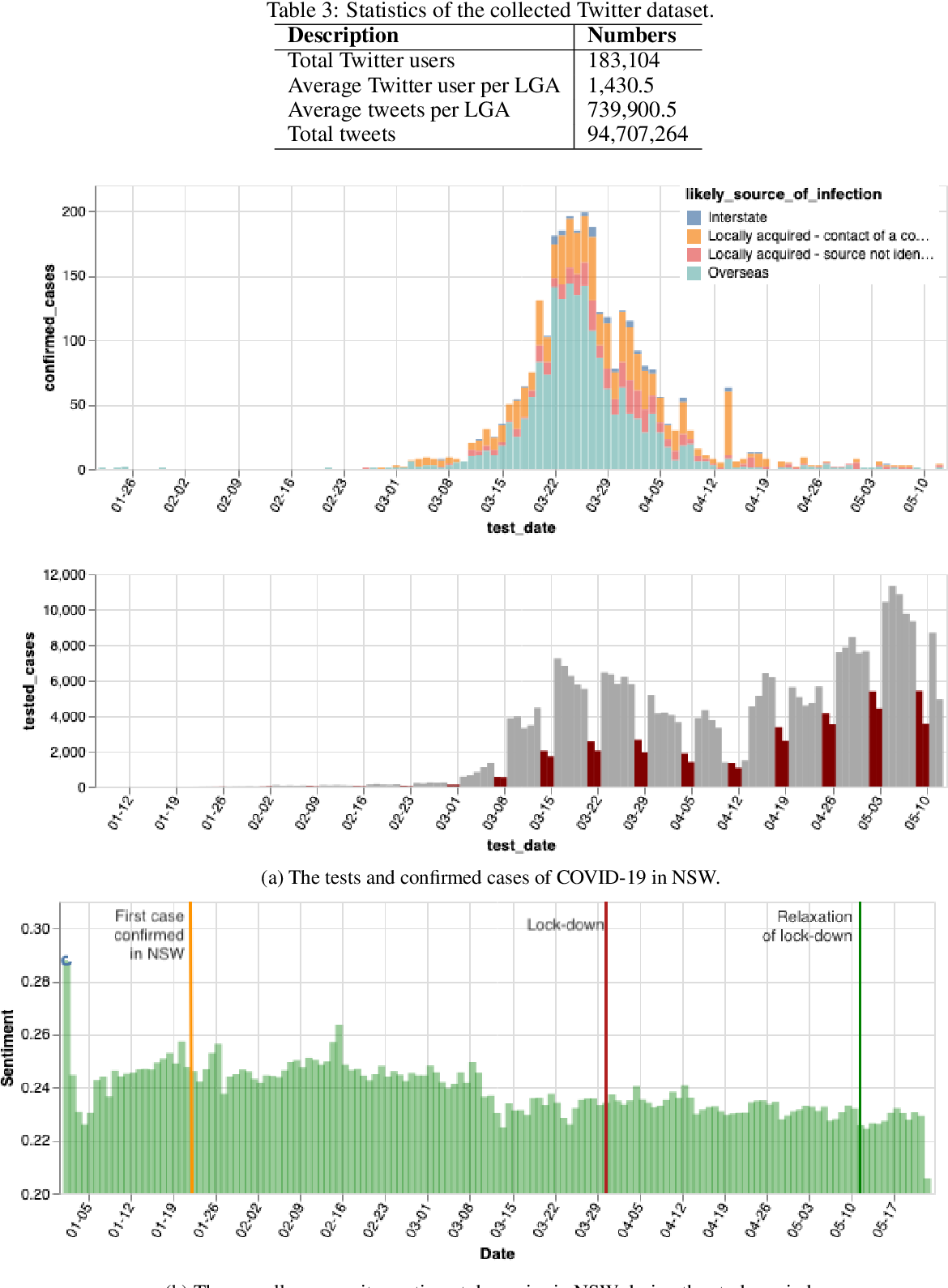 The outbreak of the novel Coronavirus Disease 2019 (COVID-19) has caused unprecedented impacts to people's daily life around the world. Various measures and policies such as lock-down and social-distancing are implemented by governments to combat the disease during the pandemic period. These measures and policies as well as virus itself may cause different mental health issues to people such as depression, anxiety, sadness, etc. In this paper, we exploit the massive text data posted by Twitter users to analyse the sentiment dynamics of people living in the state of New South Wales (NSW) in Australia during the pandemic period. Different from the existing work that mostly focuses the country-level and static sentiment analysis, we analyse the sentiment dynamics at the fine-grained local government areas (LGAs). Based on the analysis of around 94 million tweets that posted by around 183 thousand users located at different LGAs in NSW in five months, we found that people in NSW showed an overall positive sentimental polarity and the COVID-19 pandemic decreased the overall positive sentimental polarity during the pandemic period. The fine-grained analysis of sentiment in LGAs found that despite the dominant positive sentiment most of days during the study period, some LGAs experienced significant sentiment changes from positive to negative. This study also analysed the sentimental dynamics delivered by the hot topics in Twitter such as government policies (e.g. the Australia's JobKeeper program, lock-down, social-distancing) as well as the focused social events (e.g. the Ruby Princess Cruise). The results showed that the policies and events did affect people's overall sentiment, and they affected people's overall sentiment differently at different stages. 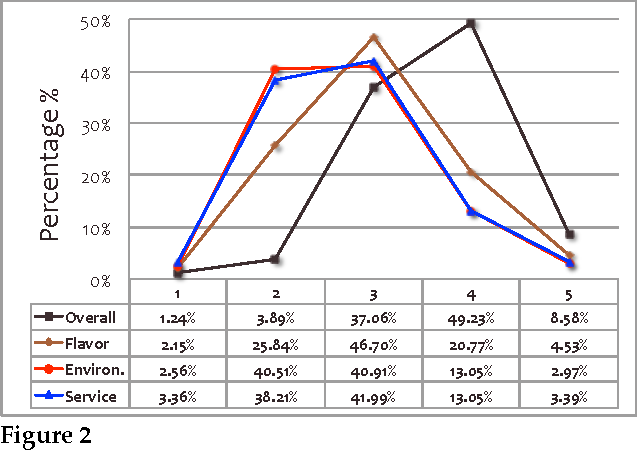 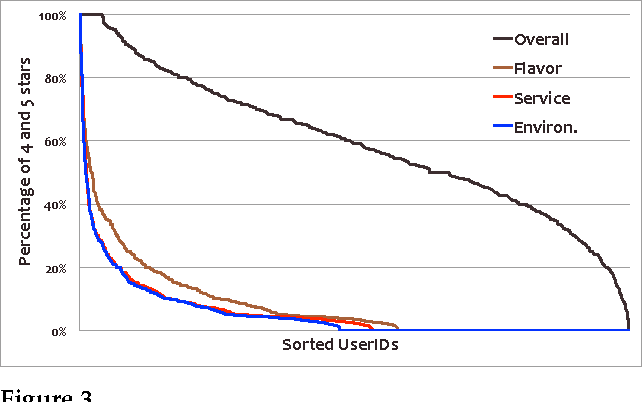 Sentiment analysis on user reviews helps to keep track of user reactions towards products, and make advices to users about what to buy. State-of-the-art review-level sentiment classification techniques could give pretty good precisions of above 90%. However, current phrase-level sentiment analysis approaches might only give sentiment polarity labelling precisions of around 70%~80%, which is far from satisfaction and restricts its application in many practical tasks. In this paper, we focus on the problem of phrase-level sentiment polarity labelling and attempt to bridge the gap between phrase-level and review-level sentiment analysis. We investigate the inconsistency between the numerical star ratings and the sentiment orientation of textual user reviews. Although they have long been treated as identical, which serves as a basic assumption in previous work, we find that this assumption is not necessarily true. We further propose to leverage the results of review-level sentiment classification to boost the performance of phrase-level polarity labelling using a novel constrained convex optimization framework. Besides, the framework is capable of integrating various kinds of information sources and heuristics, while giving the global optimal solution due to its convexity. Experimental results on both English and Chinese reviews show that our framework achieves high labelling precisions of up to 89%, which is a significant improvement from current approaches. 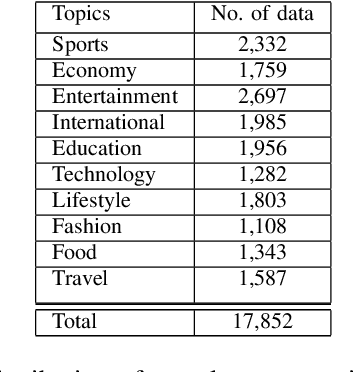 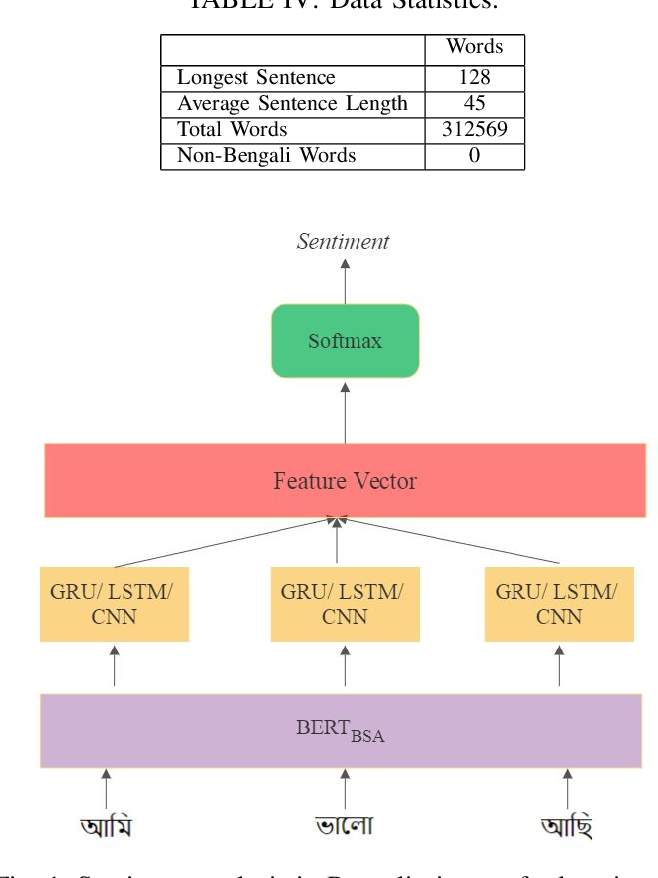 Sentiment analysis (SA) in Bengali is challenging due to this Indo-Aryan language's highly inflected properties with more than 160 different inflected forms for verbs and 36 different forms for noun and 24 different forms for pronouns. The lack of standard labeled datasets in the Bengali domain makes the task of SA even harder. In this paper, we present manually tagged 2-class and 3-class SA datasets in Bengali. We also demonstrate that the multi-lingual BERT model with relevant extensions can be trained via the approach of transfer learning over those novel datasets to improve the state-of-the-art performance in sentiment classification tasks. This deep learning model achieves an accuracy of 71\% for 2-class sentiment classification compared to the current state-of-the-art accuracy of 68\%. We also present the very first Bengali SA classifier for the 3-class manually tagged dataset, and our proposed model achieves an accuracy of 60\%. We further use this model to analyze the sentiment of public comments in the online daily newspaper. Our analysis shows that people post negative comments for political or sports news more often, while the religious article comments represent positive sentiment. The dataset and code is publicly available at https://github.com/KhondokerIslam/Bengali\_Sentiment.