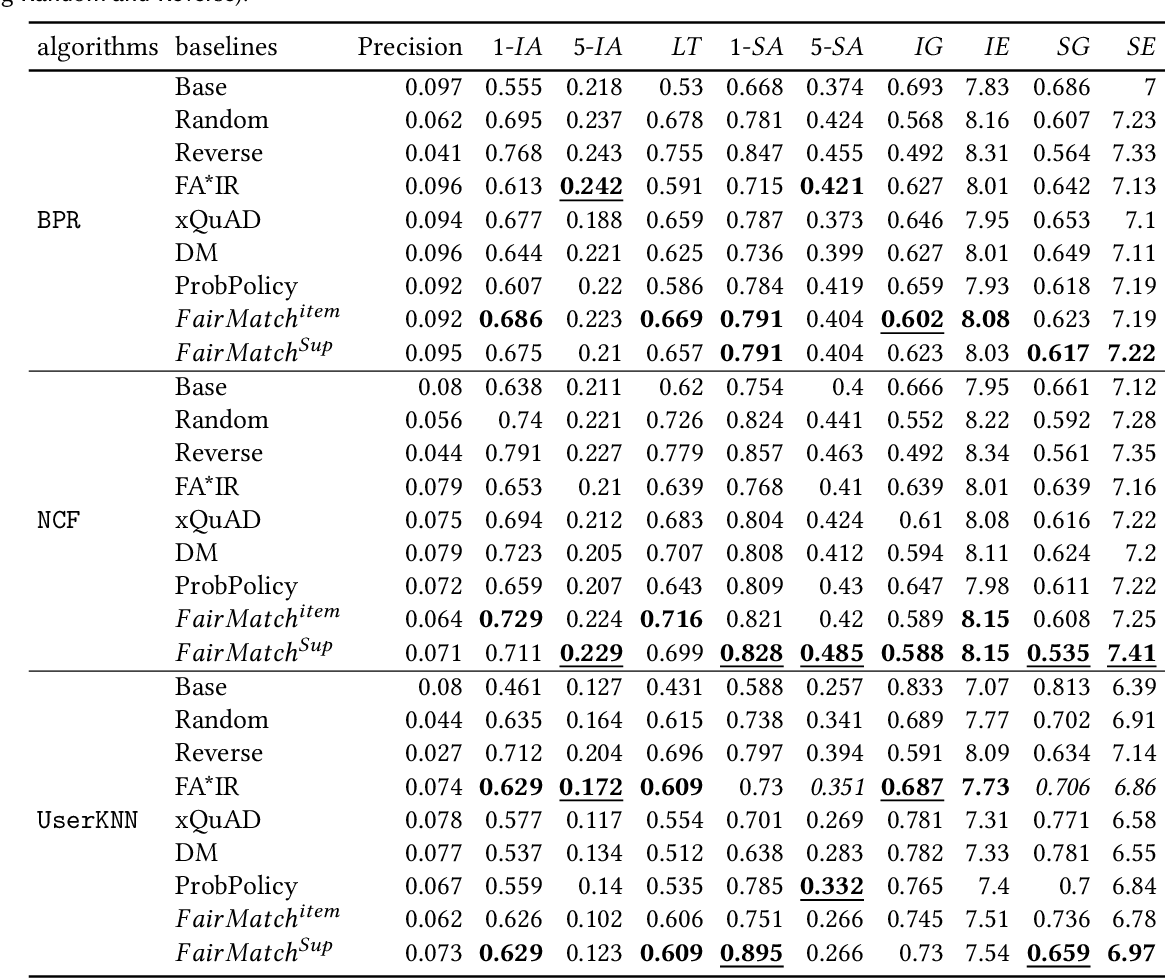 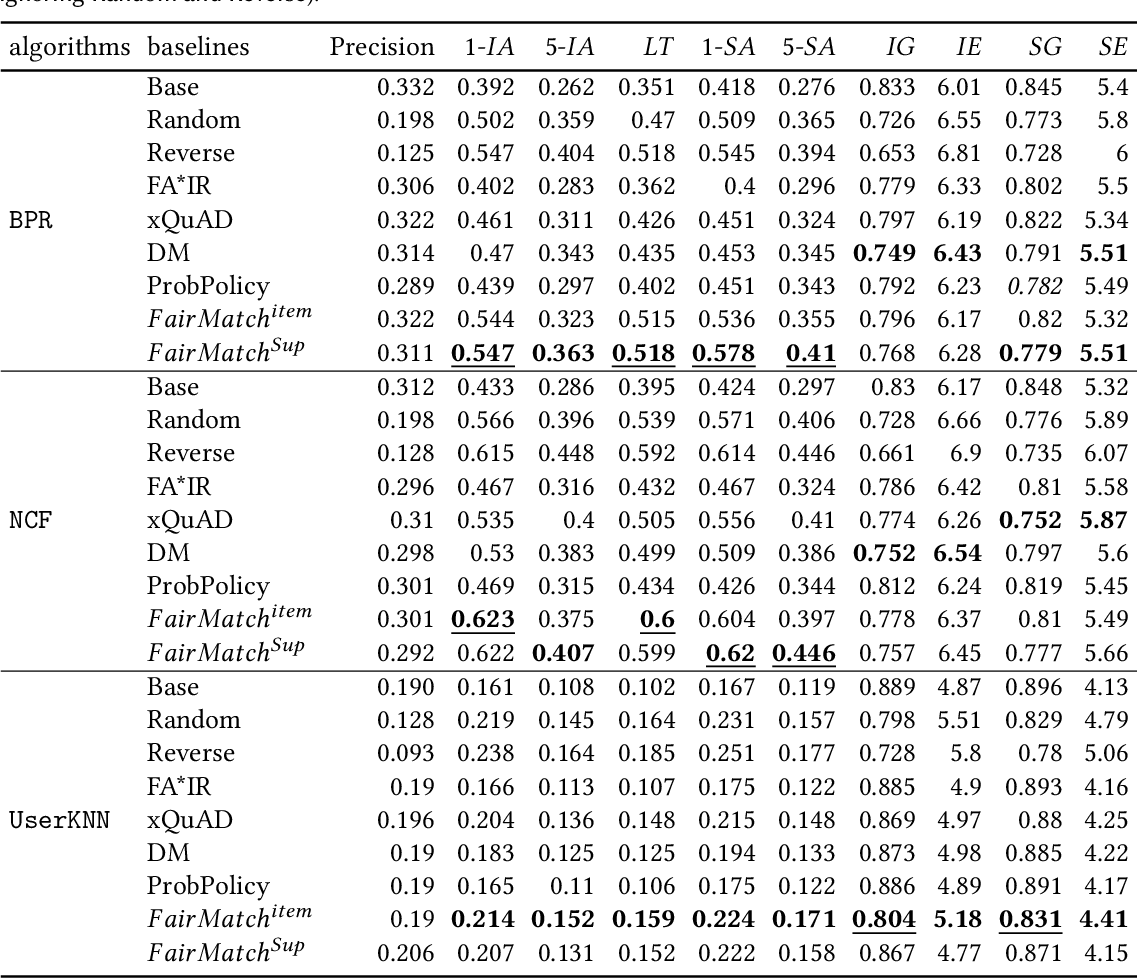 Fairness is a critical system-level objective in recommender systems that has been the subject of extensive recent research. A specific form of fairness is supplier exposure fairness where the objective is to ensure equitable coverage of items across all suppliers in recommendations provided to users. This is especially important in multistakeholder recommendation scenarios where it may be important to optimize utilities not just for the end-user, but also for other stakeholders such as item sellers or producers who desire a fair representation of their items. This type of supplier fairness is sometimes accomplished by attempting to increasing aggregate diversity in order to mitigate popularity bias and to improve the coverage of long-tail items in recommendations. In this paper, we introduce FairMatch, a general graph-based algorithm that works as a post processing approach after recommendation generation to improve exposure fairness for items and suppliers. The algorithm iteratively adds high quality items that have low visibility or items from suppliers with low exposure to the users' final recommendation lists. A comprehensive set of experiments on two datasets and comparison with state-of-the-art baselines show that FairMatch, while significantly improves exposure fairness and aggregate diversity, maintains an acceptable level of relevance of the recommendations.

A Deep Framework for Cross-Domain and Cross-System Recommendations 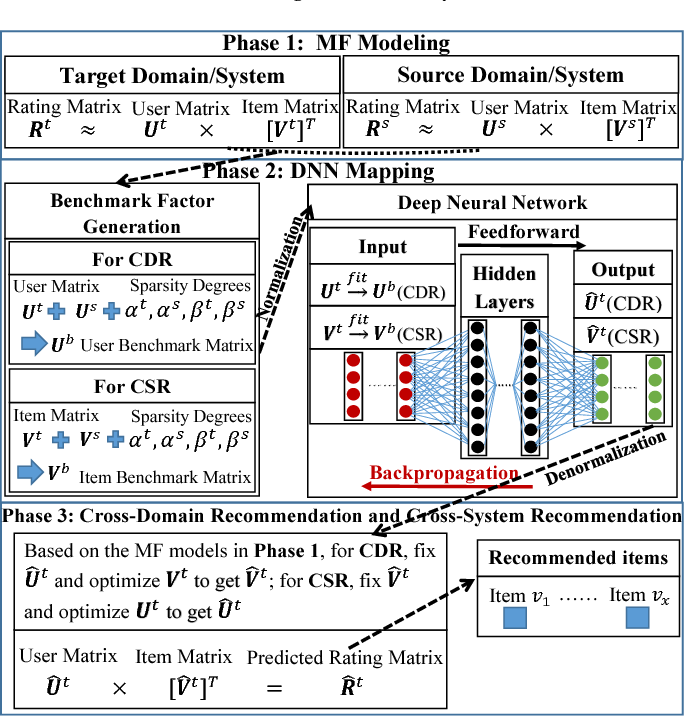 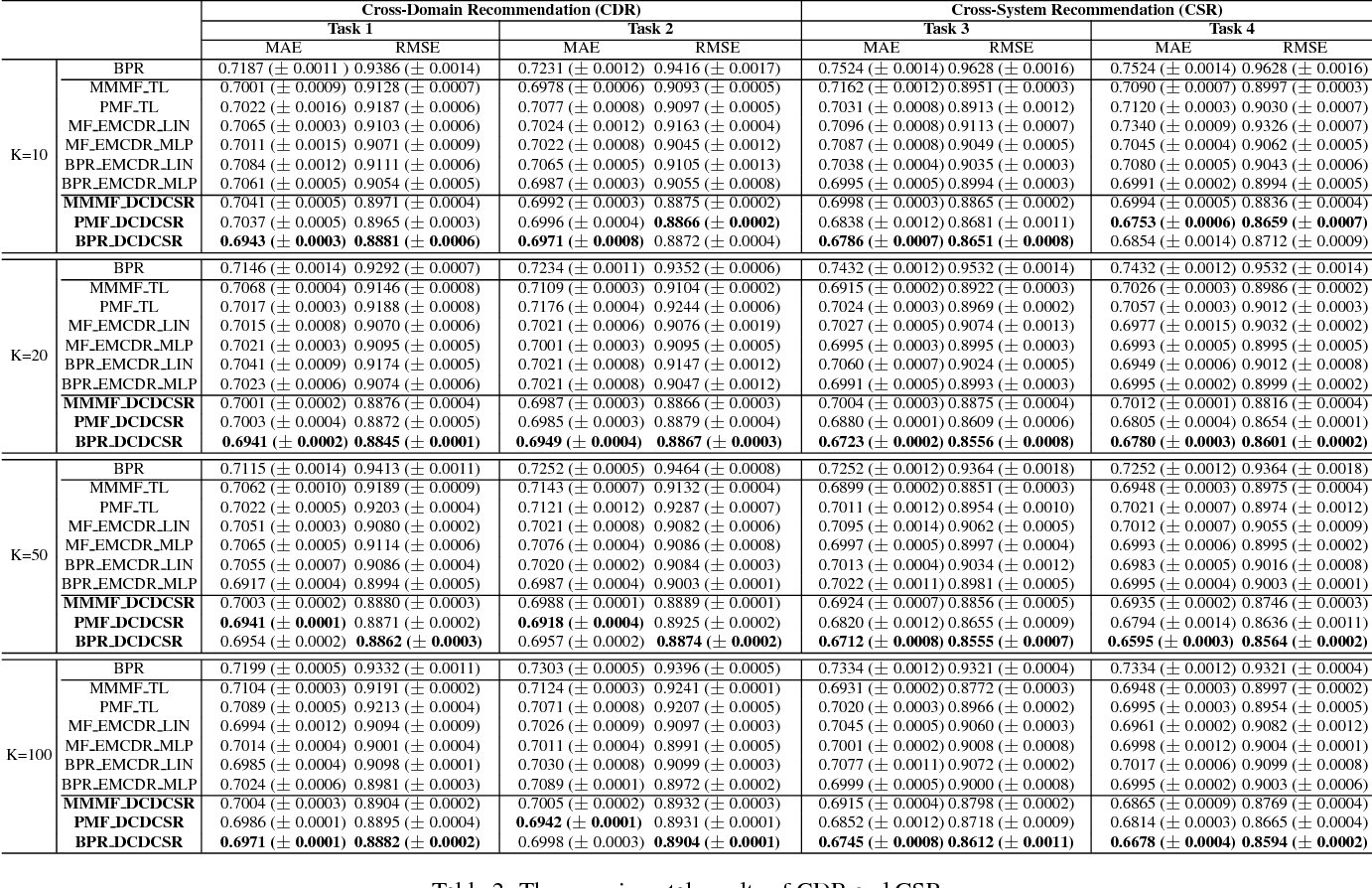 Cross-Domain Recommendation (CDR) and Cross-System Recommendations (CSR) are two of the promising solutions to address the long-standing data sparsity problem in recommender systems. They leverage the relatively richer information, e.g., ratings, from the source domain or system to improve the recommendation accuracy in the target domain or system. Therefore, finding an accurate mapping of the latent factors across domains or systems is crucial to enhancing recommendation accuracy. However, this is a very challenging task because of the complex relationships between the latent factors of the source and target domains or systems. To this end, in this paper, we propose a Deep framework for both Cross-Domain and Cross-System Recommendations, called DCDCSR, based on Matrix Factorization (MF) models and a fully connected Deep Neural Network (DNN). Specifically, DCDCSR first employs the MF models to generate user and item latent factors and then employs the DNN to map the latent factors across domains or systems. More importantly, we take into account the rating sparsity degrees of individual users and items in different domains or systems and use them to guide the DNN training process for utilizing the rating data more effectively. Extensive experiments conducted on three real-world datasets demonstrate that DCDCSR framework outperforms the state-of-the-art CDR and CSR approaches in terms of recommendation accuracy. 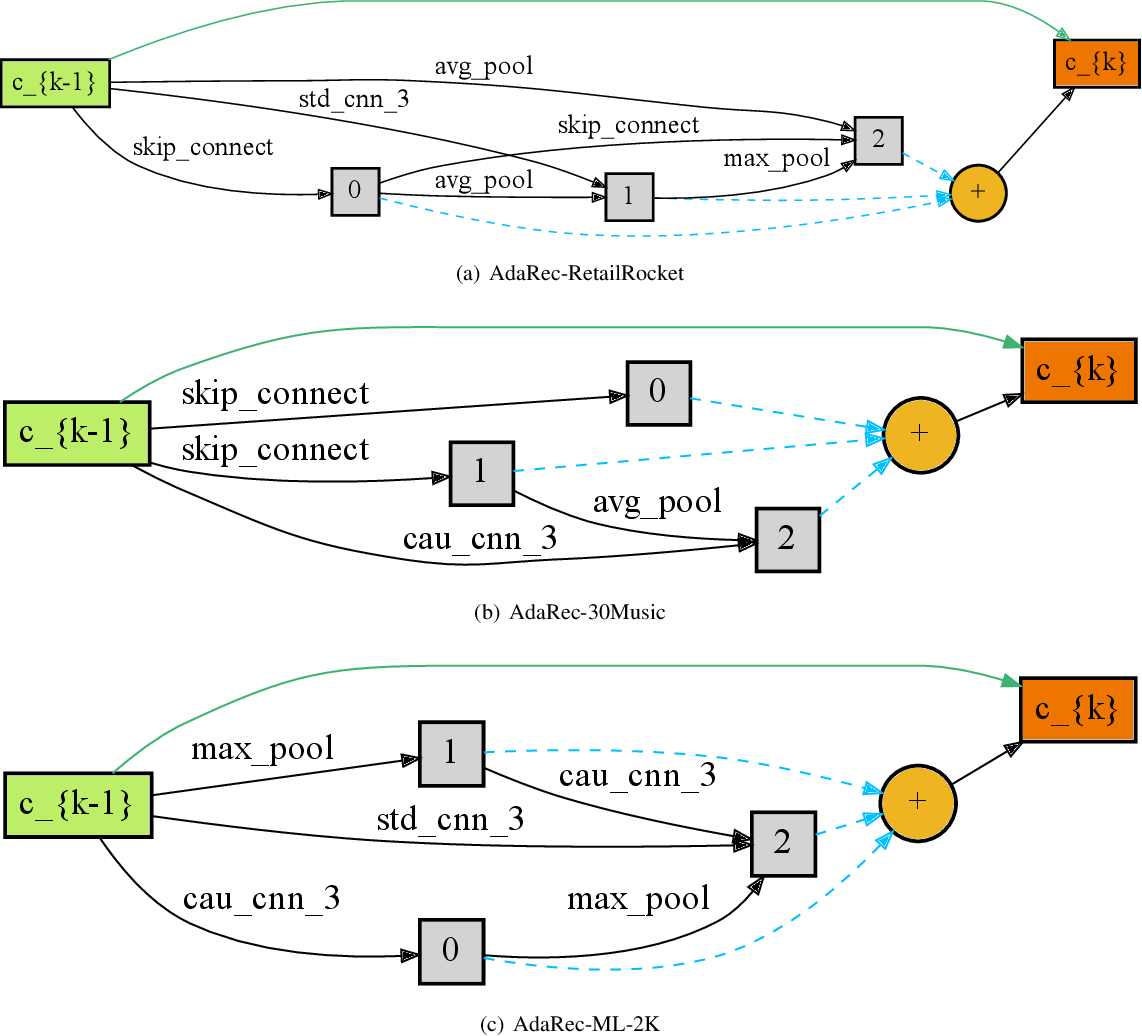 Sequential recommender systems (SRS) have become a research hotspot due to its power in modeling user dynamic interests and sequential behavioral patterns. To maximize model expressive ability, a default choice is to apply a larger and deeper network architecture, which, however, often brings high network latency when generating online recommendations. Naturally, we argue that compressing the heavy recommendation models into middle- or light- weight neural networks is of great importance for practical production systems. To realize such a goal, we propose AdaRec, a knowledge distillation (KD) framework which compresses knowledge of a teacher model into a student model adaptively according to its recommendation scene by using differentiable Neural Architecture Search (NAS). Specifically, we introduce a target-oriented distillation loss to guide the structure search process for finding the student network architecture, and a cost-sensitive loss as constraints for model size, which achieves a superior trade-off between recommendation effectiveness and efficiency. In addition, we leverage Earth Mover's Distance (EMD) to realize many-to-many layer mapping during knowledge distillation, which enables each intermediate student layer to learn from other intermediate teacher layers adaptively. Extensive experiments on real-world recommendation datasets demonstrate that our model achieves competitive or better accuracy with notable inference speedup comparing to strong counterparts, while discovering diverse neural architectures for sequential recommender models under different recommendation scenes. 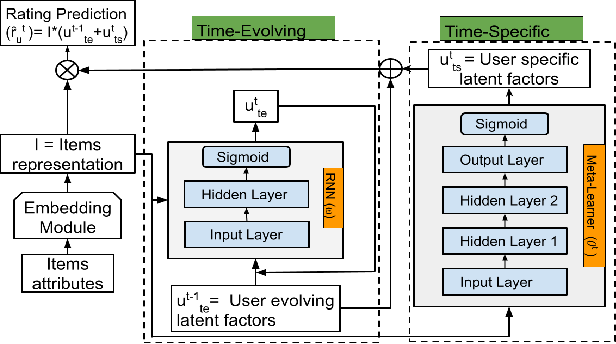 We present a novel dynamic recommendation model that focuses on users who have interactions in the past but turn relatively inactive recently. Making effective recommendations to these time-sensitive cold-start users is critical to maintain the user base of a recommender system. Due to the sparse recent interactions, it is challenging to capture these users' current preferences precisely. Solely relying on their historical interactions may also lead to outdated recommendations misaligned with their recent interests. The proposed model leverages historical and current user-item interactions and dynamically factorizes a user's (latent) preference into time-specific and time-evolving representations that jointly affect user behaviors. These latent factors further interact with an optimized item embedding to achieve accurate and timely recommendations. Experiments over real-world data help demonstrate the effectiveness of the proposed time-sensitive cold-start recommendation model. 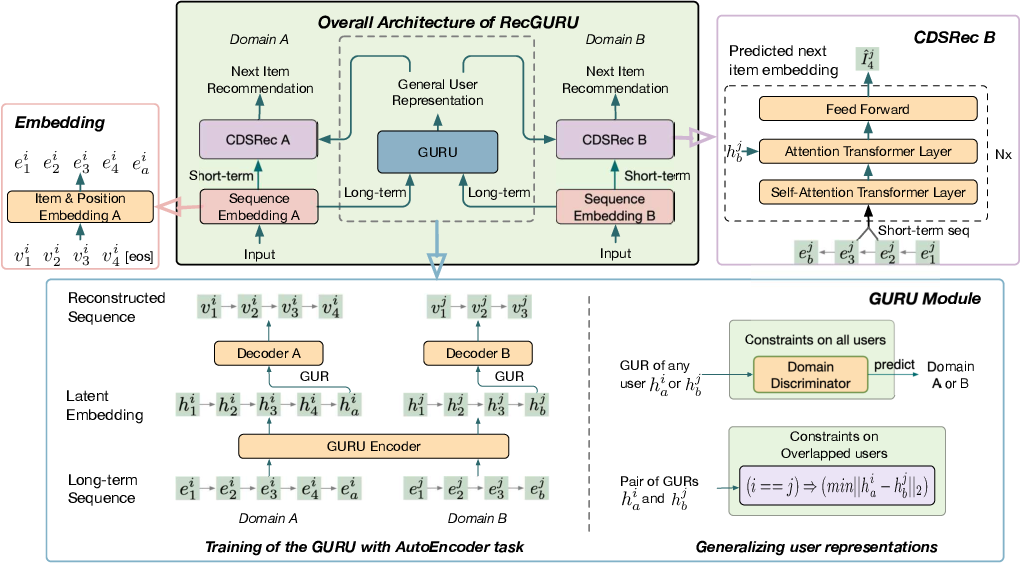 Cross-domain recommendation can help alleviate the data sparsity issue in traditional sequential recommender systems. In this paper, we propose the RecGURU algorithm framework to generate a Generalized User Representation (GUR) incorporating user information across domains in sequential recommendation, even when there is minimum or no common users in the two domains. We propose a self-attentive autoencoder to derive latent user representations, and a domain discriminator, which aims to predict the origin domain of a generated latent representation. We propose a novel adversarial learning method to train the two modules to unify user embeddings generated from different domains into a single global GUR for each user. The learned GUR captures the overall preferences and characteristics of a user and thus can be used to augment the behavior data and improve recommendations in any single domain in which the user is involved. Extensive experiments have been conducted on two public cross-domain recommendation datasets as well as a large dataset collected from real-world applications. The results demonstrate that RecGURU boosts performance and outperforms various state-of-the-art sequential recommendation and cross-domain recommendation methods. The collected data will be released to facilitate future research. 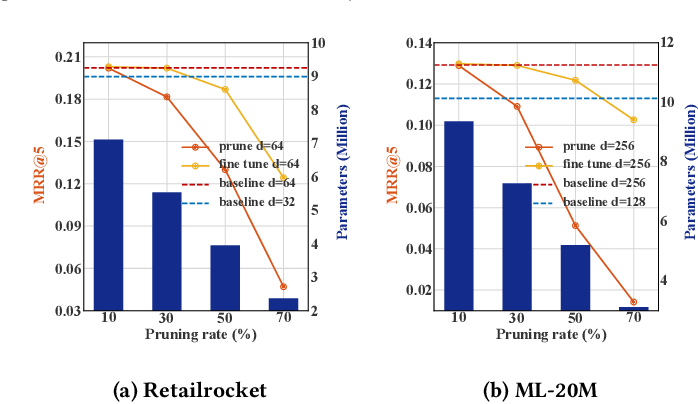 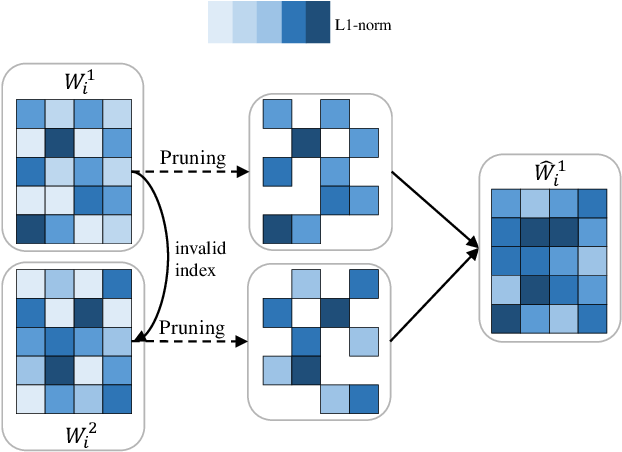 Deep neural networks (DNN) have achieved great success in the recommender systems (RS) domain. However, to achieve remarkable performance, DNN-based recommender models often require numerous parameters, which inevitably bring redundant neurons and weights, a phenomenon referred to as over-parameterization. In this paper, we plan to exploit such redundancy phenomena to improve the performance of RS. Specifically, we propose PCRec, a top-N item \underline{rec}ommendation framework that leverages collaborative training of two DNN-based recommender models with the same network structure, termed \underline{p}eer \underline{c}ollaboration. PCRec can reactivate and strengthen the unimportant (redundant) weights during training, which achieves higher prediction accuracy but maintains its original inference efficiency. To realize this, we first introduce two criteria to identify the importance of weights of a given recommender model. Then, we rejuvenate the unimportant weights by transplanting outside information (i.e., weights) from its peer network. After such an operation and retraining, the original recommender model is endowed with more representation capacity by possessing more functional model parameters. To show its generality, we instantiate PCRec by using three well-known recommender models. We conduct extensive experiments on three real-world datasets, and show that PCRec yields significantly better recommendations than its counterpart with the same model (parameter) size. 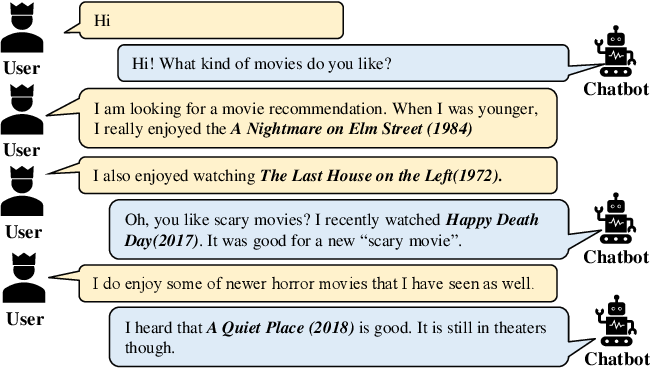 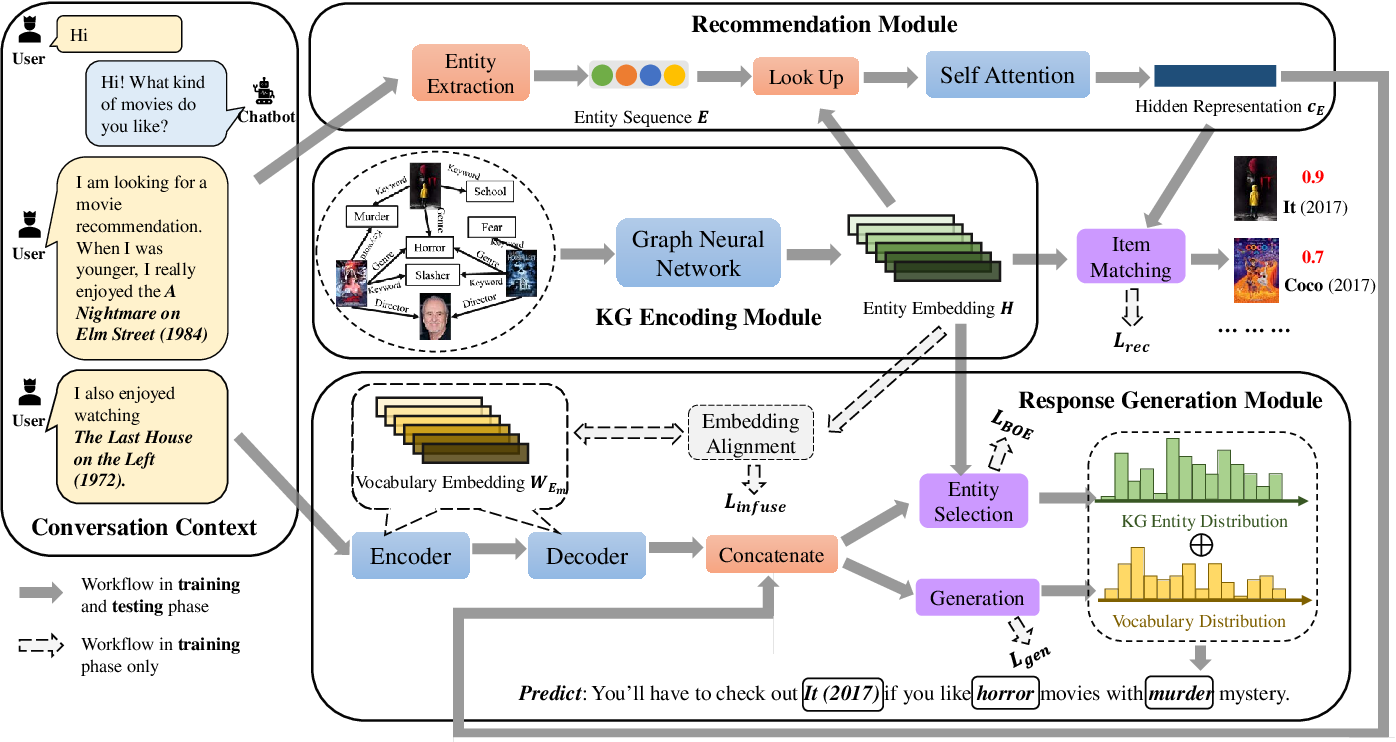 The chit-chat-based conversational recommendation systems (CRS) provide item recommendations to users through natural language interactions. To better understand user's intentions, external knowledge graphs (KG) have been introduced into chit-chat-based CRS. However, existing chit-chat-based CRS usually generate repetitive item recommendations, and they cannot properly infuse knowledge from KG into CRS to generate informative responses. To remedy these issues, we first reformulate the conversational recommendation task to highlight that the recommended items should be new and possibly interested by users. Then, we propose the Knowledge-Enriched Conversational Recommendation System (KECRS). Specifically, we develop the Bag-of-Entity (BOE) loss and the infusion loss to better integrate KG with CRS for generating more diverse and informative responses. BOE loss provides an additional supervision signal to guide CRS to learn from both human-written utterances and KG. Infusion loss bridges the gap between the word embeddings and entity embeddings by minimizing distances of the same words in these two embeddings. Moreover, we facilitate our study by constructing a high-quality KG, \ie The Movie Domain Knowledge Graph (TMDKG). Experimental results on a large-scale dataset demonstrate that KECRS outperforms state-of-the-art chit-chat-based CRS, in terms of both recommendation accuracy and response generation quality.

Algorithms and Architecture for Real-time Recommendations at News UK 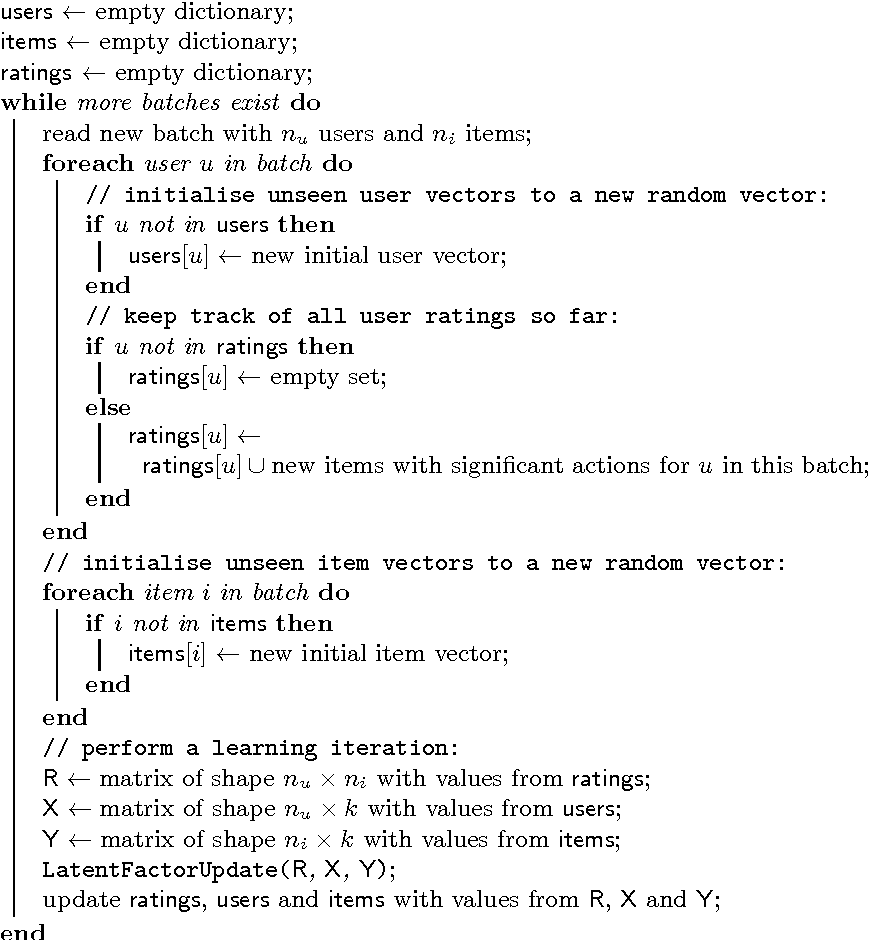 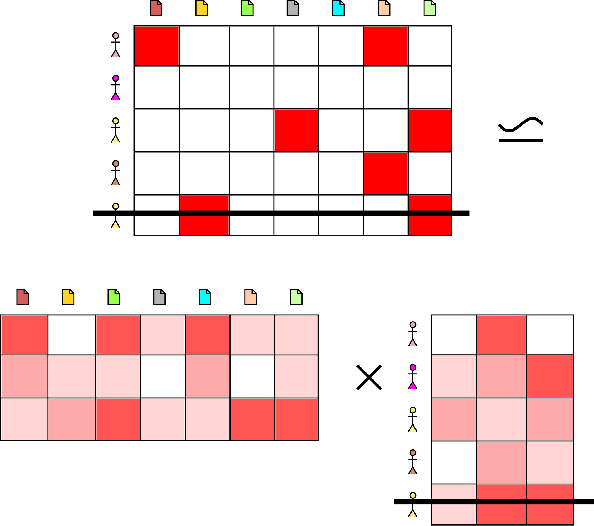 Recommendation systems are recognised as being hugely important in industry, and the area is now well understood. At News UK, there is a requirement to be able to quickly generate recommendations for users on news items as they are published. However, little has been published about systems that can generate recommendations in response to changes in recommendable items and user behaviour in a very short space of time. In this paper we describe a new algorithm for updating collaborative filtering models incrementally, and demonstrate its effectiveness on clickstream data from The Times. We also describe the architecture that allows recommendations to be generated on the fly, and how we have made each component scalable. The system is currently being used in production at News UK. 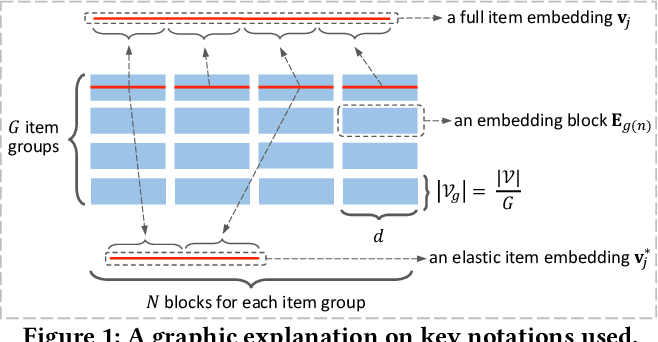 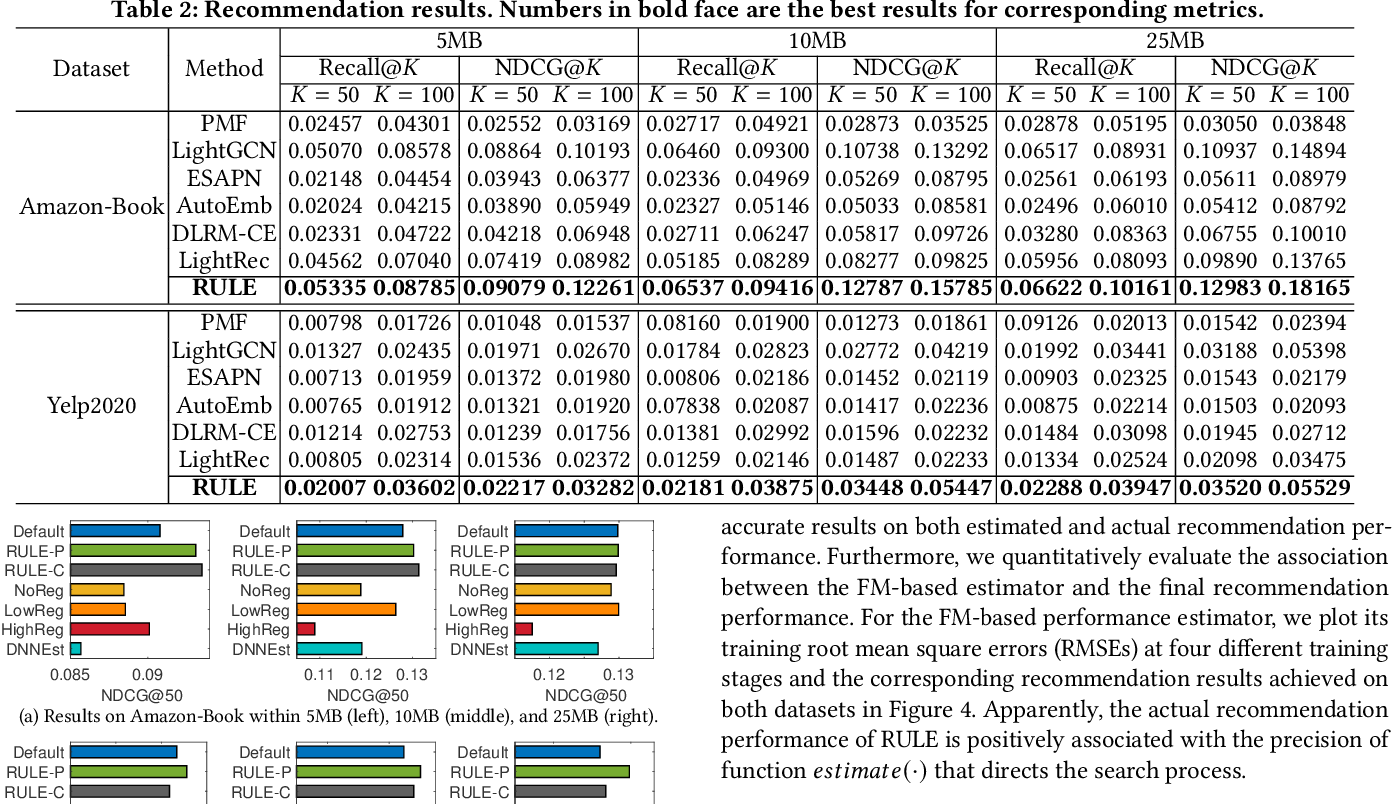 In today's context, deploying data-driven services like recommendation on edge devices instead of cloud servers becomes increasingly attractive due to privacy and network latency concerns. A common practice in building compact on-device recommender systems is to compress their embeddings which are normally the cause of excessive parameterization. However, despite the vast variety of devices and their associated memory constraints, existing memory-efficient recommender systems are only specialized for a fixed memory budget in every design and training life cycle, where a new model has to be retrained to obtain the optimal performance while adapting to a smaller/larger memory budget. In this paper, we present a novel lightweight recommendation paradigm that allows a well-trained recommender to be customized for arbitrary device-specific memory constraints without retraining. The core idea is to compose elastic embeddings for each item, where an elastic embedding is the concatenation of a set of embedding blocks that are carefully chosen by an automated search function. Correspondingly, we propose an innovative approach, namely recommendation with universally learned elastic embeddings (RULE). To ensure the expressiveness of all candidate embedding blocks, RULE enforces a diversity-driven regularization when learning different embedding blocks. Then, a performance estimator-based evolutionary search function is designed, allowing for efficient specialization of elastic embeddings under any memory constraint for on-device recommendation. Extensive experiments on real-world datasets reveal the superior performance of RULE under tight memory budgets.