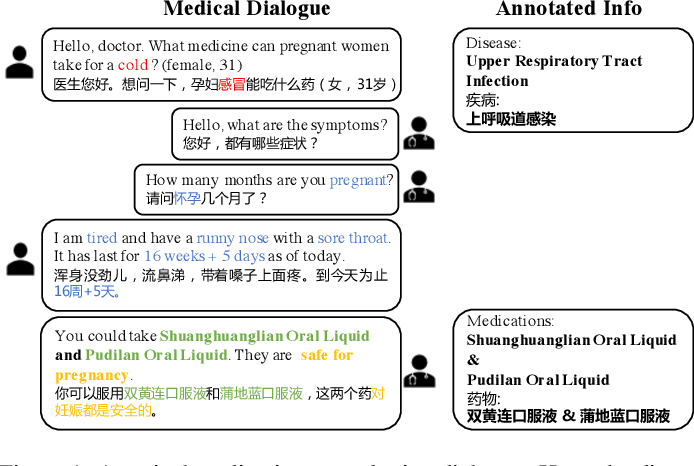 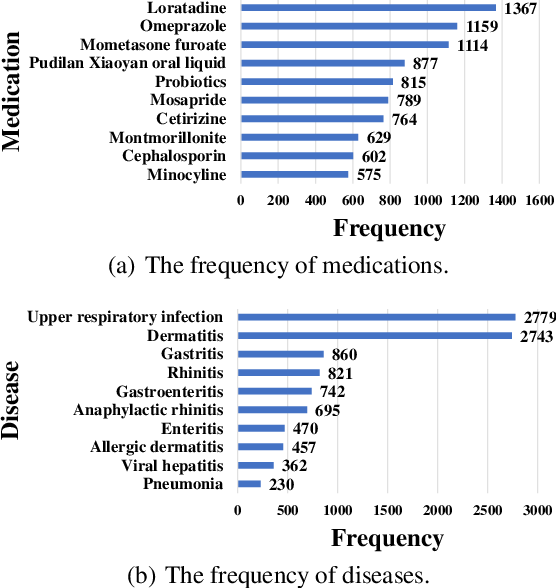 Medication recommendation is a crucial task for intelligent healthcare systems. Previous studies mainly recommend medications with electronic health records(EHRs). However, some details of interactions between doctors and patients may be ignored in EHRs, which are essential for automatic medication recommendation. Therefore, we make the first attempt to recommend medications with the conversations between doctors and patients. In this work, we construct DialMed, the first high-quality dataset for medical dialogue-based medication recommendation task. It contains 11,996 medical dialogues related to 16 common diseases from 3 departments and 70 corresponding common medications. Furthermore, we propose a Dialogue structure and Disease knowledge aware Network(DDN), where a graph attention network is utilized to model the dialogue structure and the knowledge graph is used to introduce external disease knowledge. The extensive experimental results demonstrate that the proposed method is a promising solution to recommend medications with medical dialogues. The dataset and code are available at https://github.com/Hhhhhhhzf/DialMed. 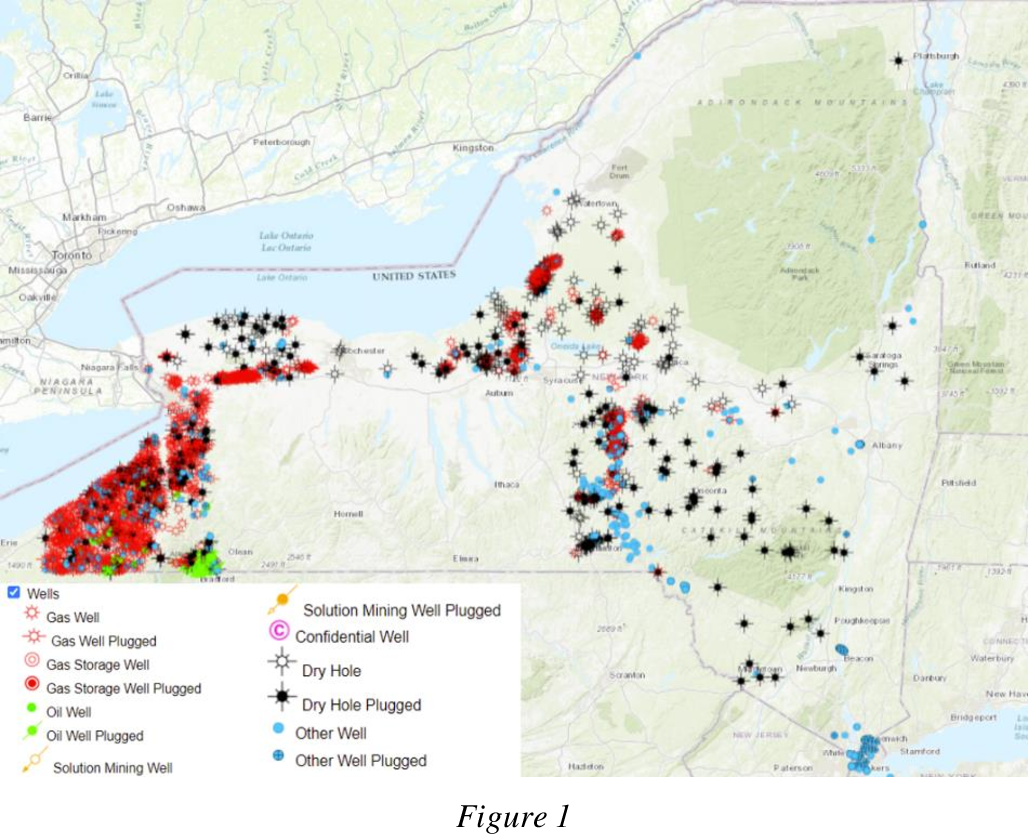 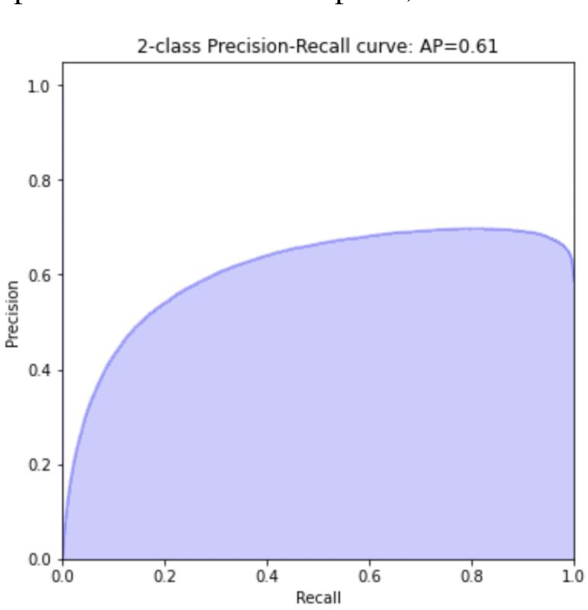 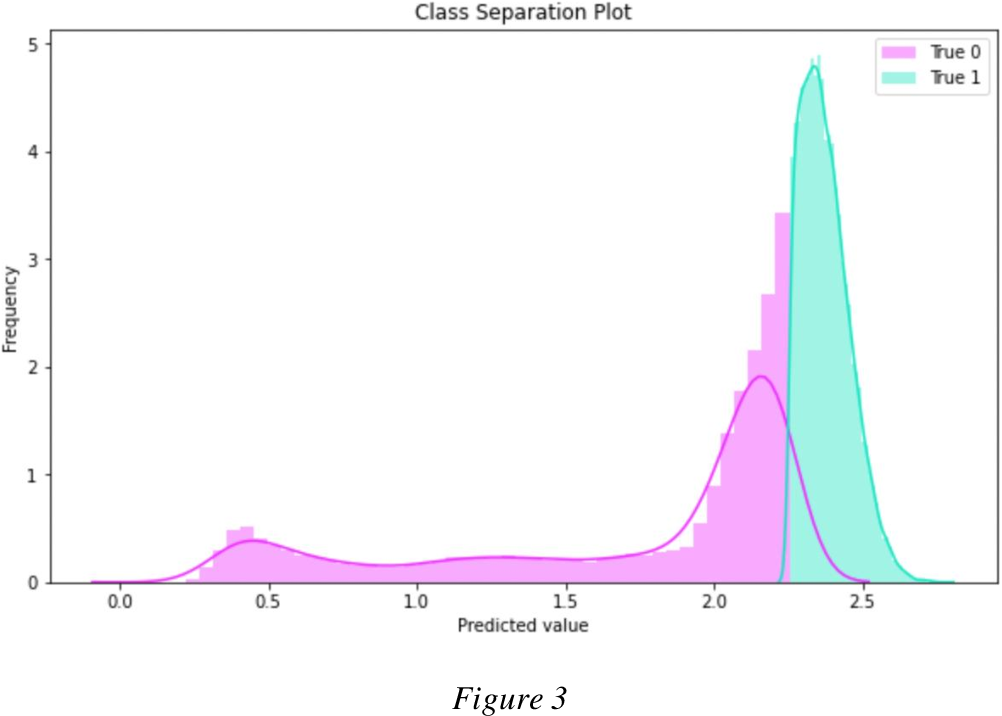 Well acquisition in the oil and gas industry can often be a hit or miss process, with a poor purchase resulting in substantial loss. Recommender systems suggest items (wells) that users (companies) are likely to buy based on past activity, and applying this system to well acquisition can increase company profits. While traditional recommender systems are impactful enough on their own, they are not optimized. This is because they ignore many of the complexities involved in human decision-making, and frequently make subpar recommendations. Using a preexisting Python implementation of a Factorization Machine results in more accurate recommendations based on a user-level ranking system. We train a Factorization Machine model on oil and gas well data that includes features such as elevation, total depth, and location. The model produces recommendations by using similarities between companies and wells, as well as their interactions. Our model has a hit rate of 0.680, reciprocal rank of 0.469, precision of 0.229, and recall of 0.463. These metrics imply that while our model is able to recommend the correct wells in a general sense, it does not match exact wells to companies via relevance. To improve the model's accuracy, future models should incorporate additional features such as the well's production data and ownership duration as these features will produce more accurate recommendations. 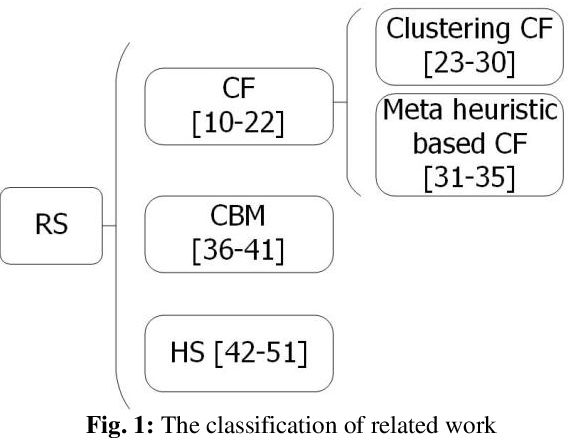 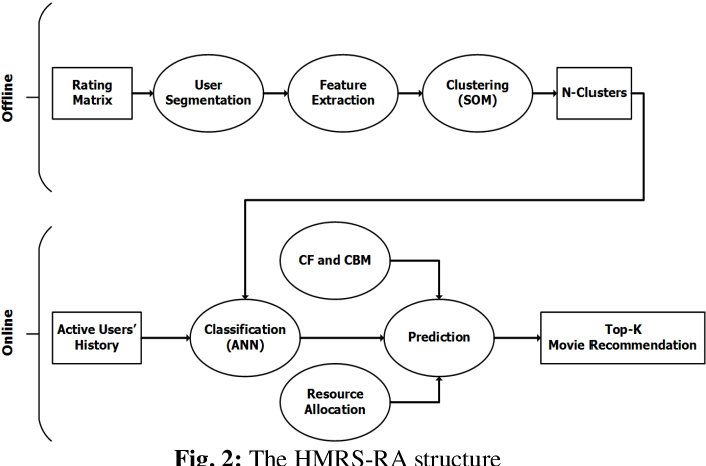 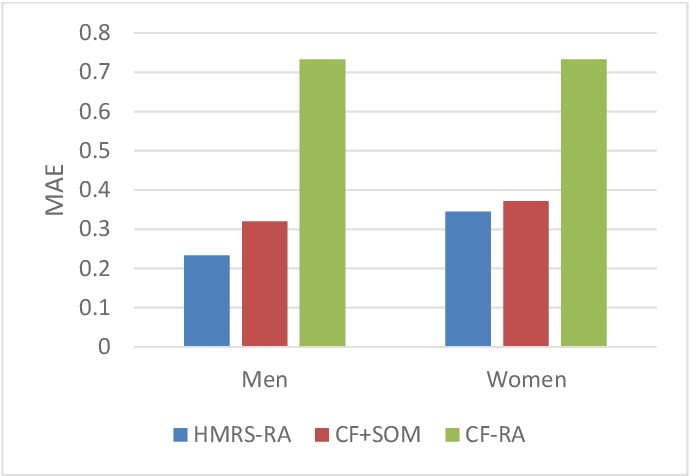 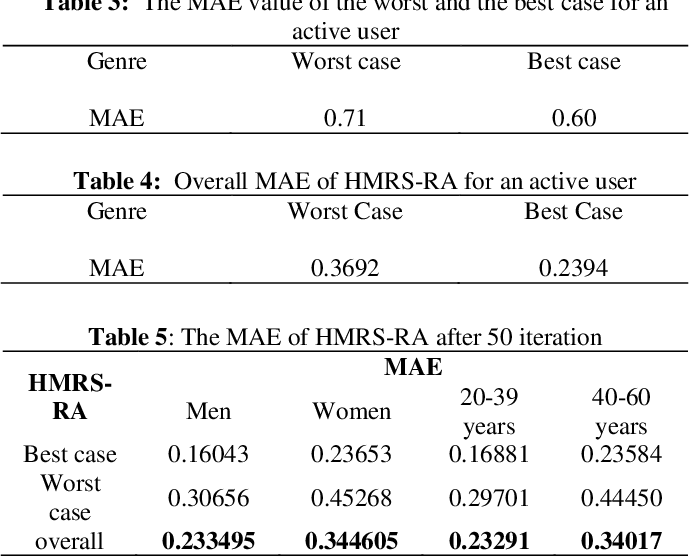 Recommender Systems are inevitable to personalize user's experiences on the Internet. They are using different approaches to recommend the Top-K items to users according to their preferences. Nowadays recommender systems have become one of the most important parts of largescale data mining techniques. In this paper, we propose a Hybrid Movie Recommender System (HMRS) based on Resource Allocation to improve the accuracy of recommendation and solve the cold start problem for a new movie. HMRS-RA uses a self-organizing mapping neural network to clustering the users into N clusters. The users' preferences are different according to their age and gender, therefore HMRS-RA is a combination of a Content-Based Method for solving the cold start problem for a new movie and a Collaborative Filtering model besides the demographic information of users. The experimental results based on the MovieLens dataset show that the HMRS-RA increases the accuracy of recommendation compared to the state-of-art and similar works. 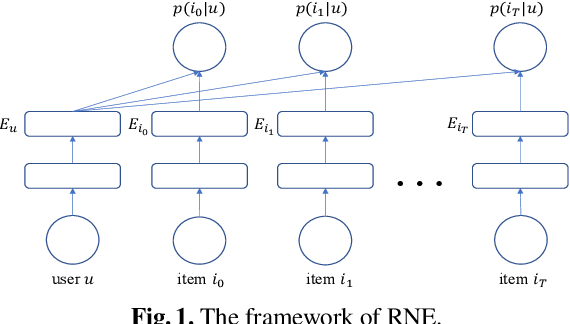 Nowadays designing a real recommendation system has been a critical problem for both academic and industry. However, due to the huge number of users and items, the diversity and dynamic property of the user interest, how to design a scalable recommendation system, which is able to efficiently produce effective and diverse recommendation results on billion-scale scenarios, is still a challenging and open problem for existing methods. In this paper, given the user-item interaction graph, we propose RNE, a data-efficient Recommendation-based Network Embedding method, to give personalized and diverse items to users. Specifically, we propose a diversity- and dynamics-aware neighbor sampling method for network embedding. On the one hand, the method is able to preserve the local structure between the users and items while modeling the diversity and dynamic property of the user interest to boost the recommendation quality. On the other hand the sampling method can reduce the complexity of the whole method theoretically to make it possible for billion-scale recommendation. We also implement the designed algorithm in a distributed way to further improves its scalability. Experimentally, we deploy RNE on a recommendation scenario of Taobao, the largest E-commerce platform in China, and train it on a billion-scale user-item graph. As is shown on several online metrics on A/B testing, RNE is able to achieve both high-quality and diverse results compared with CF-based methods. We also conduct the offline experiments on Pinterest dataset comparing with several state-of-the-art recommendation methods and network embedding methods. The results demonstrate that our method is able to produce a good result while runs much faster than the baseline methods. 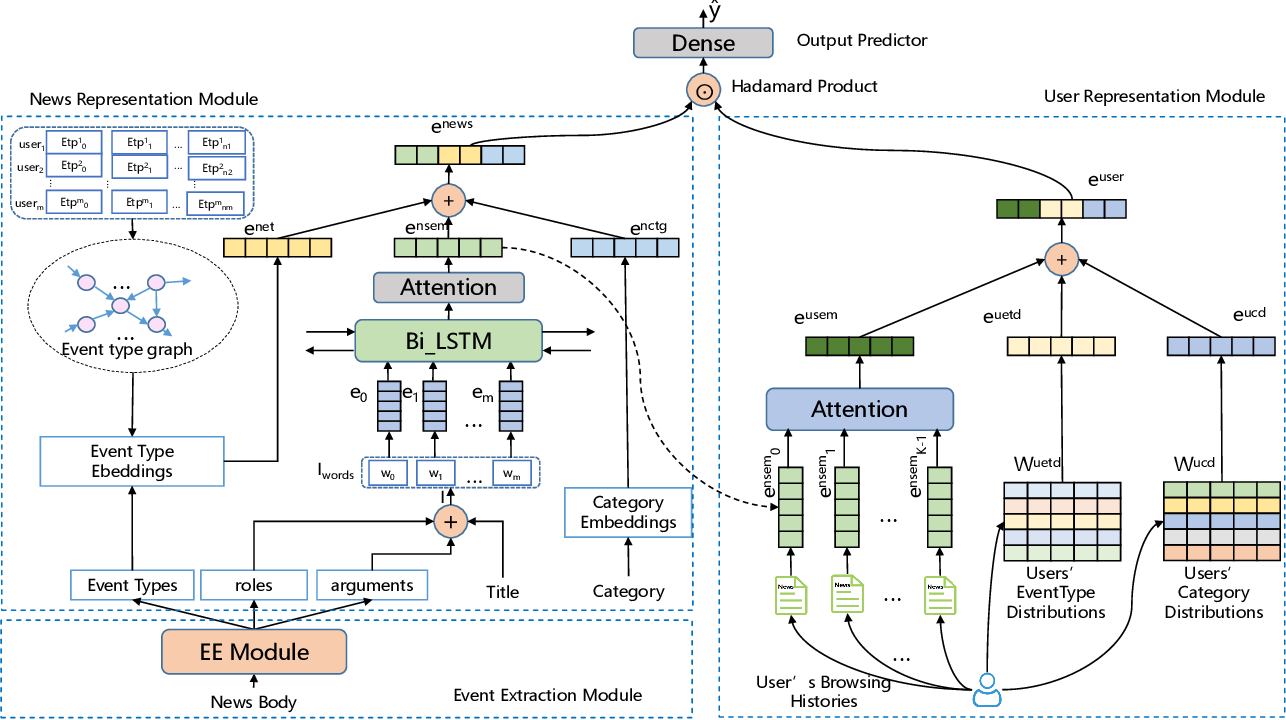 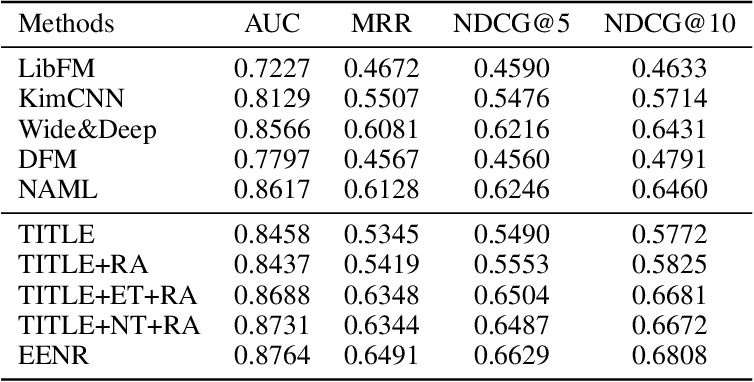 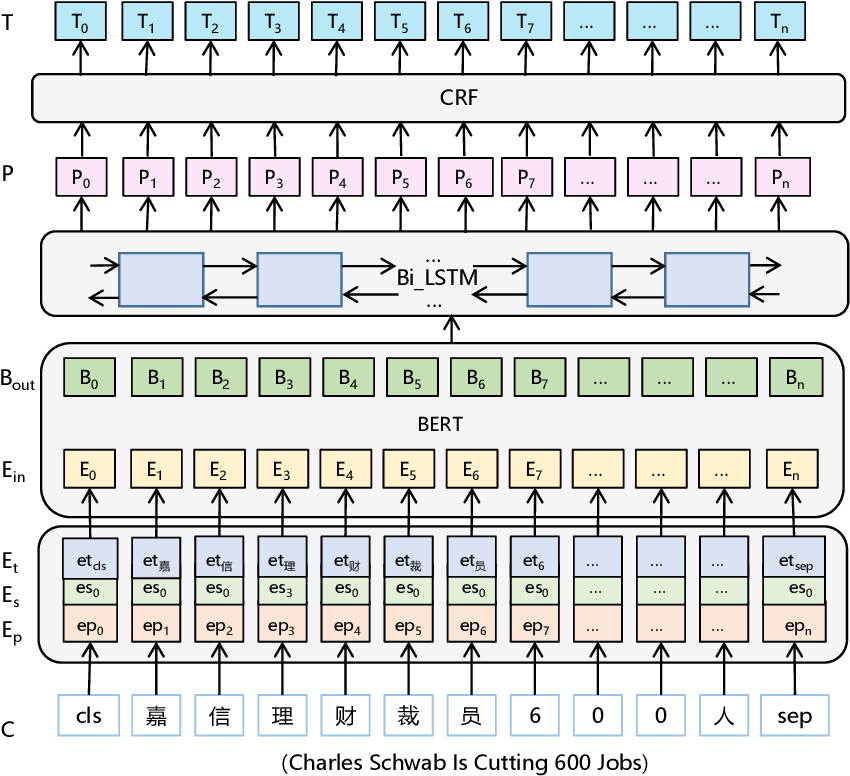 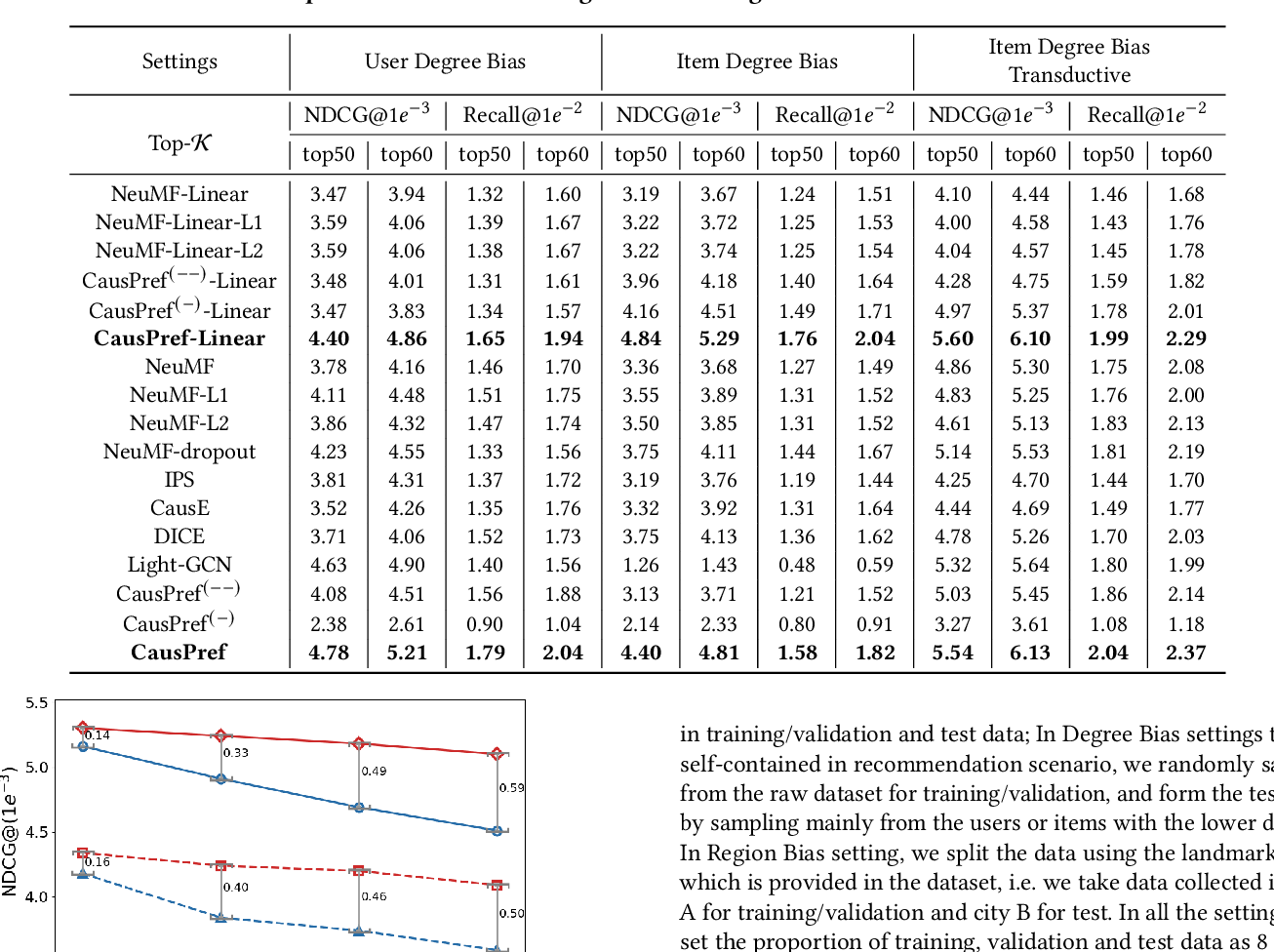 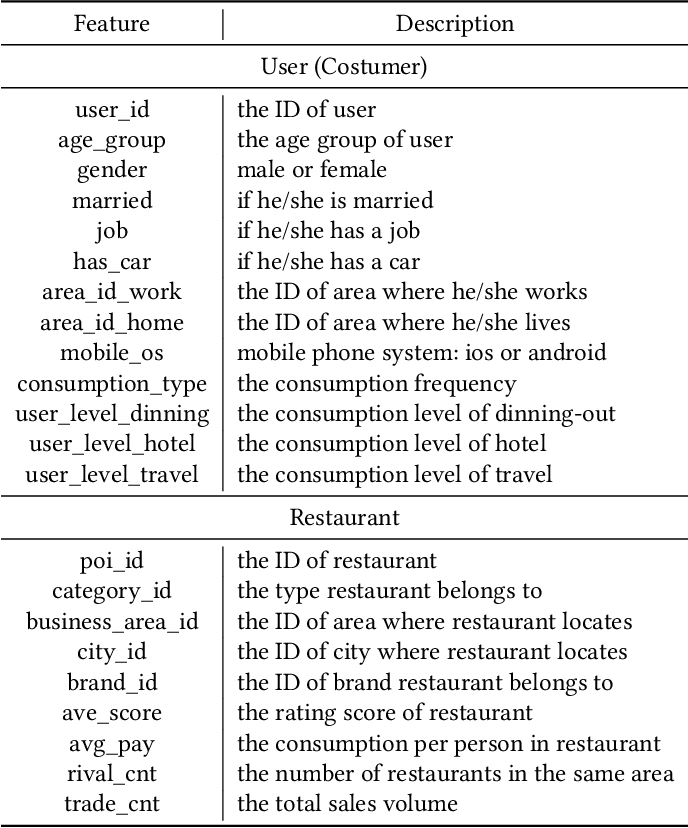 In spite of the tremendous development of recommender system owing to the progressive capability of machine learning recently, the current recommender system is still vulnerable to the distribution shift of users and items in realistic scenarios, leading to the sharp decline of performance in testing environments. It is even more severe in many common applications where only the implicit feedback from sparse data is available. Hence, it is crucial to promote the performance stability of recommendation method in different environments. In this work, we first make a thorough analysis of implicit recommendation problem from the viewpoint of out-of-distribution (OOD) generalization. Then under the guidance of our theoretical analysis, we propose to incorporate the recommendation-specific DAG learner into a novel causal preference-based recommendation framework named CausPref, mainly consisting of causal learning of invariant user preference and anti-preference negative sampling to deal with implicit feedback. Extensive experimental results from real-world datasets clearly demonstrate that our approach surpasses the benchmark models significantly under types of out-of-distribution settings, and show its impressive interpretability.

In this paper, we consider controllability as a means to satisfy dynamic preferences of users, enabling them to control recommendations such that their current preference is met. While deep models have shown improved performance for collaborative filtering, they are generally not amenable to fine grained control by a user, leading to the development of methods like deep language critiquing. We propose an alternate view, where instead of keyphrase based critiques, a user is provided 'knobs' in a disentangled latent space, with each knob corresponding to an item aspect. Disentanglement here refers to a latent space where generative factors (here, a preference towards an item category like genre) are captured independently in their respective dimensions, thereby enabling predictable manipulations, otherwise not possible in an entangled space. We propose using a (semi-)supervised disentanglement objective for this purpose, as well as multiple metrics to evaluate the controllability and the degree of personalization of controlled recommendations. We show that by updating the disentangled latent space based on user feedback, and by exploiting the generative nature of the recommender, controlled and personalized recommendations can be produced. Through experiments on two widely used collaborative filtering datasets, we demonstrate that a controllable recommender can be trained with a slight reduction in recommender performance, provided enough supervision is provided. The recommendations produced by these models appear to both conform to a user's current preference and remain personalized. 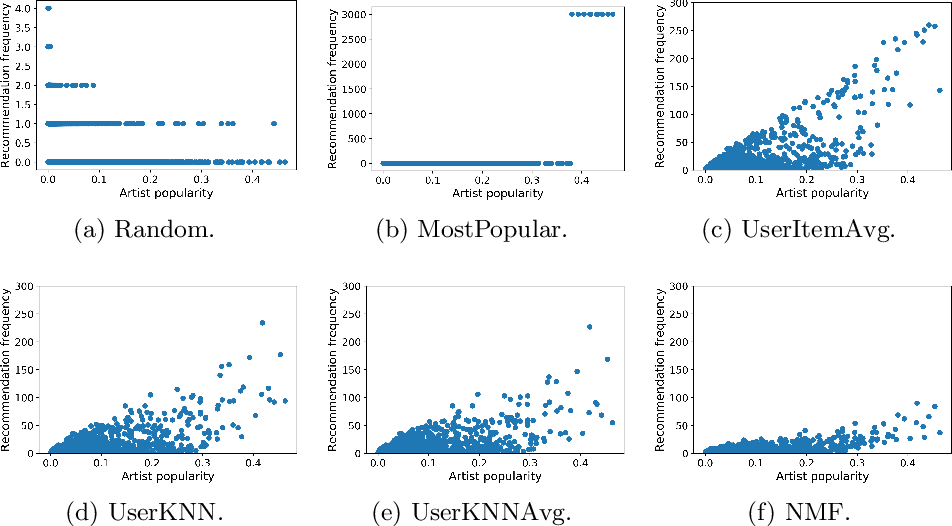 Research has shown that recommender systems are typically biased towards popular items, which leads to less popular items being underrepresented in recommendations. The recent work of Abdollahpouri et al. in the context of movie recommendations has shown that this popularity bias leads to unfair treatment of both long-tail items as well as users with little interest in popular items. In this paper, we reproduce the analyses of Abdollahpouri et al. in the context of music recommendation. Specifically, we investigate three user groups from the Last.fm music platform that are categorized based on how much their listening preferences deviate from the most popular music among all Last.fm users in the dataset: (i) low-mainstream users, (ii) medium-mainstream users, and (iii) high-mainstream users. In line with Abdollahpouri et al., we find that state-of-the-art recommendation algorithms favor popular items also in the music domain. However, their proposed Group Average Popularity metric yields different results for Last.fm than for the movie domain, presumably due to the larger number of available items (i.e., music artists) in the Last.fm dataset we use. Finally, we compare the accuracy results of the recommendation algorithms for the three user groups and find that the low-mainstreaminess group significantly receives the worst recommendations.

Recommendation as a Communication Game: Self-Supervised Bot-Play for Goal-oriented Dialogue 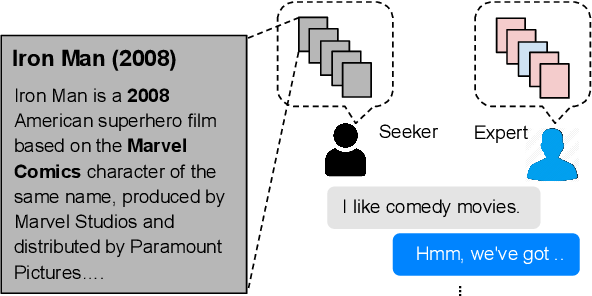 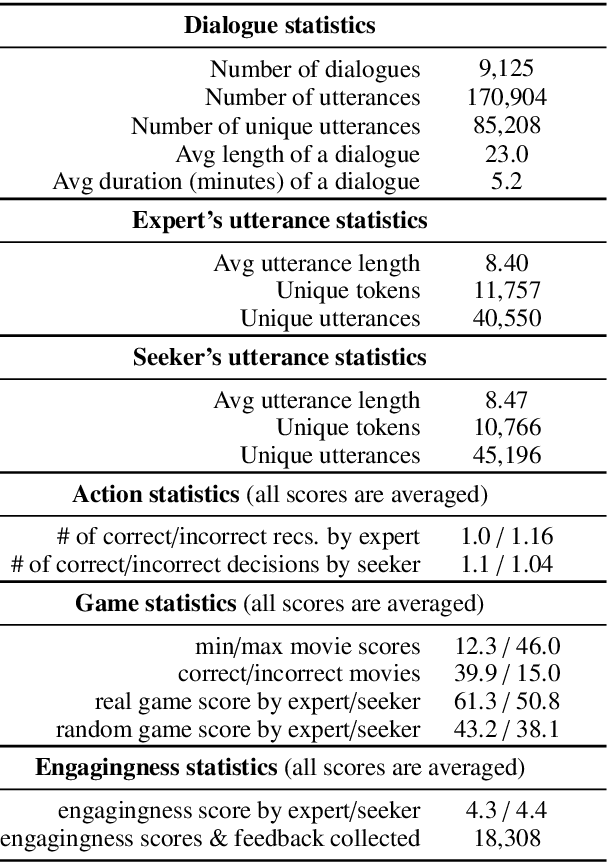 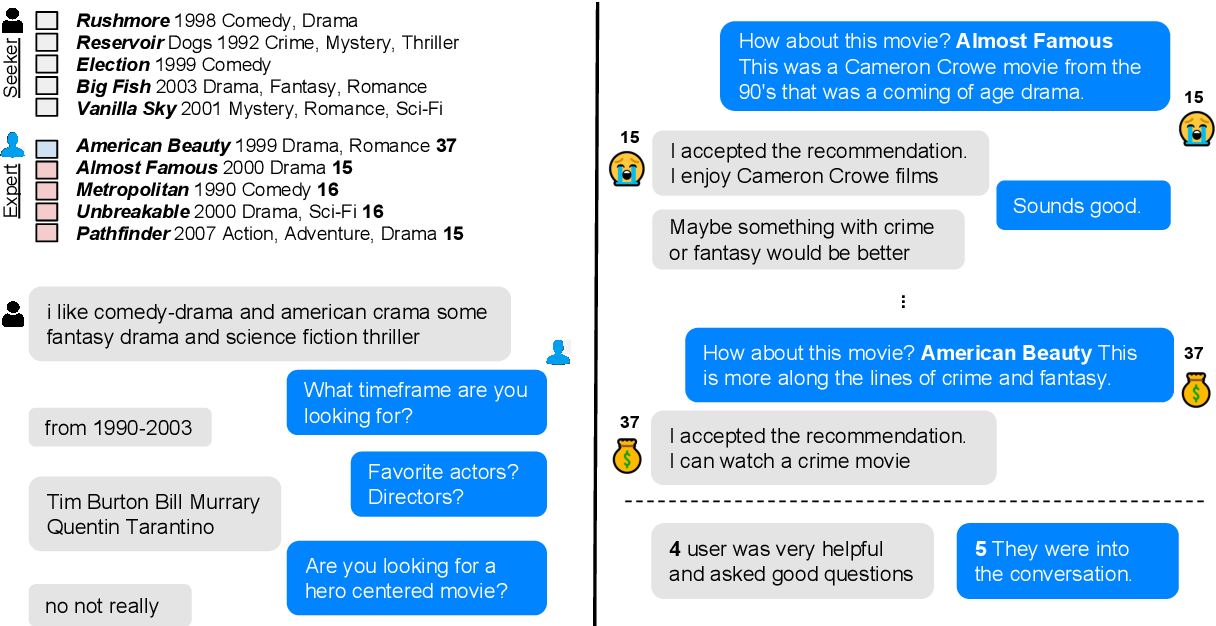 Traditional recommendation systems produce static rather than interactive recommendations invariant to a user's specific requests, clarifications, or current mood, and can suffer from the cold-start problem if their tastes are unknown. These issues can be alleviated by treating recommendation as an interactive dialogue task instead, where an expert recommender can sequentially ask about someone's preferences, react to their requests, and recommend more appropriate items. In this work, we collect a goal-driven recommendation dialogue dataset (GoRecDial), which consists of 9,125 dialogue games and 81,260 conversation turns between pairs of human workers recommending movies to each other. The task is specifically designed as a cooperative game between two players working towards a quantifiable common goal. We leverage the dataset to develop an end-to-end dialogue system that can simultaneously converse and recommend. Models are first trained to imitate the behavior of human players without considering the task goal itself (supervised training). We then finetune our models on simulated bot-bot conversations between two paired pre-trained models (bot-play), in order to achieve the dialogue goal. Our experiments show that models finetuned with bot-play learn improved dialogue strategies, reach the dialogue goal more often when paired with a human, and are rated as more consistent by humans compared to models trained without bot-play. The dataset and code are publicly available through the ParlAI framework.