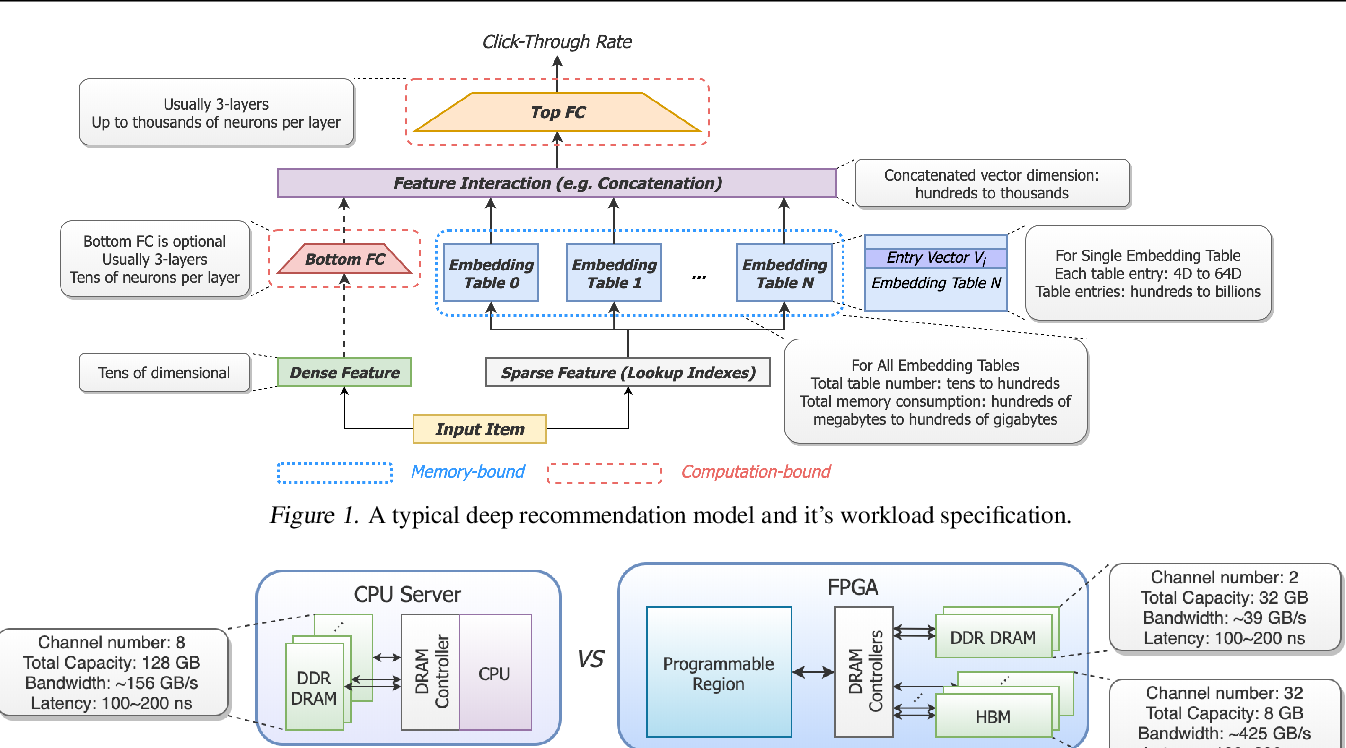 Pixie: A System for Recommending 3+ Billion Items to 200+ Million Users in Real-Time 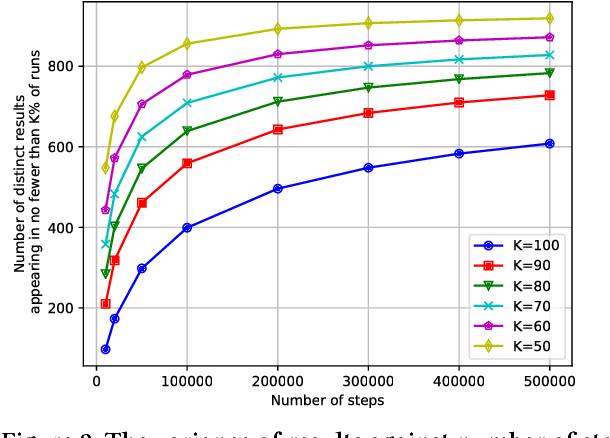 User experience in modern content discovery applications critically depends on high-quality personalized recommendations. However, building systems that provide such recommendations presents a major challenge due to a massive pool of items, a large number of users, and requirements for recommendations to be responsive to user actions and generated on demand in real-time. Here we present Pixie, a scalable graph-based real-time recommender system that we developed and deployed at Pinterest. Given a set of user-specific pins as a query, Pixie selects in real-time from billions of possible pins those that are most related to the query. To generate recommendations, we develop Pixie Random Walk algorithm that utilizes the Pinterest object graph of 3 billion nodes and 17 billion edges. Experiments show that recommendations provided by Pixie lead up to 50% higher user engagement when compared to the previous Hadoop-based production system. Furthermore, we develop a graph pruning strategy at that leads to an additional 58% improvement in recommendations. Last, we discuss system aspects of Pixie, where a single server executes 1,200 recommendation requests per second with 60 millisecond latency. Today, systems backed by Pixie contribute to more than 80% of all user engagement on Pinterest. 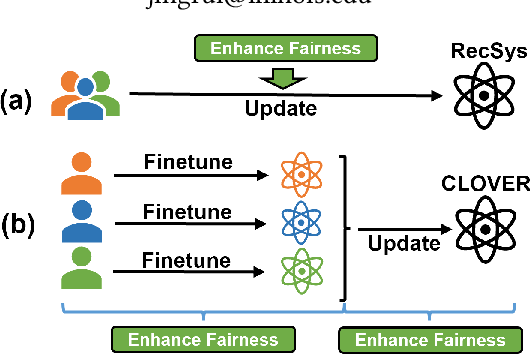 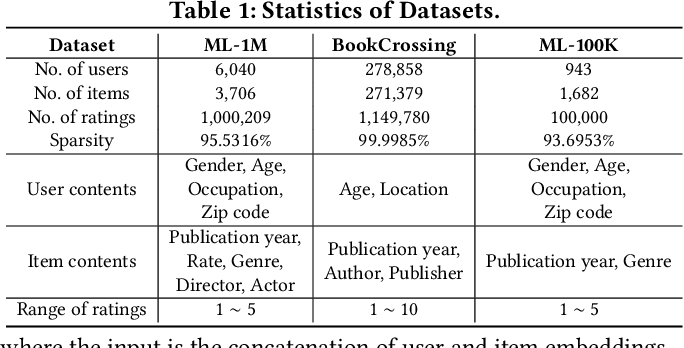 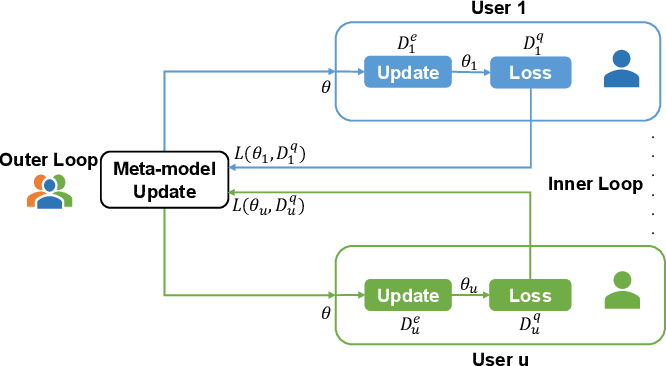 In recommender systems, one common challenge is the cold-start problem, where interactions are very limited for fresh users in the systems. To address this challenge, recently, many works introduce the meta-optimization idea into the recommendation scenarios, i.e. learning to learn the user preference by only a few past interaction items. The core idea is to learn global shared meta-initialization parameters for all users and rapidly adapt them into local parameters for each user respectively. They aim at deriving general knowledge across preference learning of various users, so as to rapidly adapt to the future new user with the learned prior and a small amount of training data. However, previous works have shown that recommender systems are generally vulnerable to bias and unfairness. Despite the success of meta-learning at improving the recommendation performance with cold-start, the fairness issues are largely overlooked. In this paper, we propose a comprehensive fair meta-learning framework, named CLOVER, for ensuring the fairness of meta-learned recommendation models. We systematically study three kinds of fairness - individual fairness, counterfactual fairness, and group fairness in the recommender systems, and propose to satisfy all three kinds via a multi-task adversarial learning scheme. Our framework offers a generic training paradigm that is applicable to different meta-learned recommender systems. We demonstrate the effectiveness of CLOVER on the representative meta-learned user preference estimator on three real-world data sets. Empirical results show that CLOVER achieves comprehensive fairness without deteriorating the overall cold-start recommendation performance. 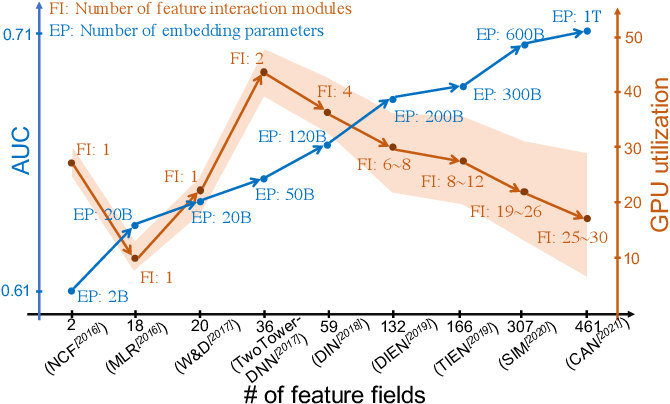 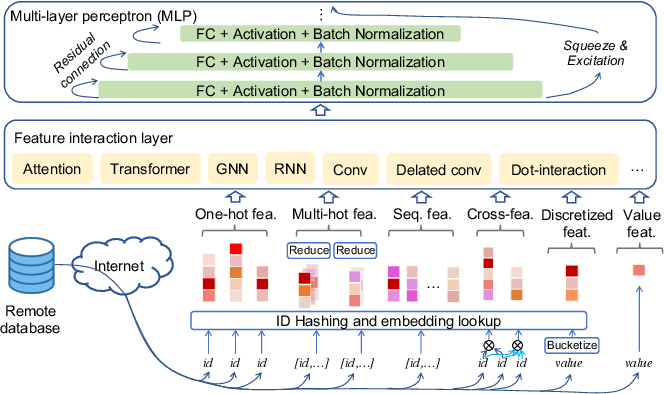 The development of personalized recommendation has significantly improved the accuracy of information matching and the revenue of e-commerce platforms. Recently, it has 2 trends: 1) recommender systems must be trained timely to cope with ever-growing new products and ever-changing user interests from online marketing and social network; 2) SOTA recommendation models introduce DNN modules to improve prediction accuracy. Traditional CPU-based recommender systems cannot meet these two trends, and GPU- centric training has become a trending approach. However, we observe that GPU devices in training recommender systems are underutilized, and they cannot attain an expected throughput improvement as what it has achieved in CV and NLP areas. This issue can be explained by two characteristics of these recommendation models: First, they contain up to a thousand input feature fields, introducing fragmentary and memory-intensive operations; Second, the multiple constituent feature interaction submodules introduce substantial small-sized compute kernels. To remove this roadblock to the development of recommender systems, we propose a novel framework named PICASSO to accelerate the training of recommendation models on commodity hardware. Specifically, we conduct a systematic analysis to reveal the bottlenecks encountered in training recommendation models. We leverage the model structure and data distribution to unleash the potential of hardware through our packing, interleaving, and caching optimization. Experiments show that PICASSO increases the hardware utilization by an order of magnitude on the basis of SOTA baselines and brings up to 6x throughput improvement for a variety of industrial recommendation models. Using the same hardware budget in production, PICASSO on average shortens the walltime of daily training tasks by 7 hours, significantly reducing the delay of continuous delivery. 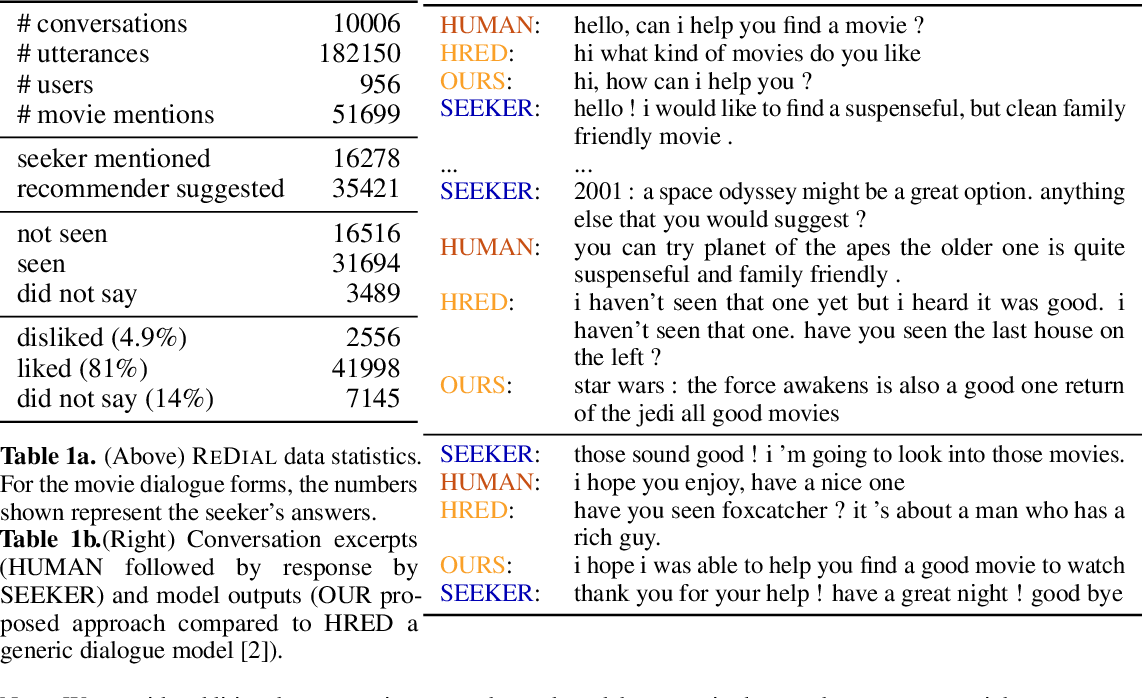 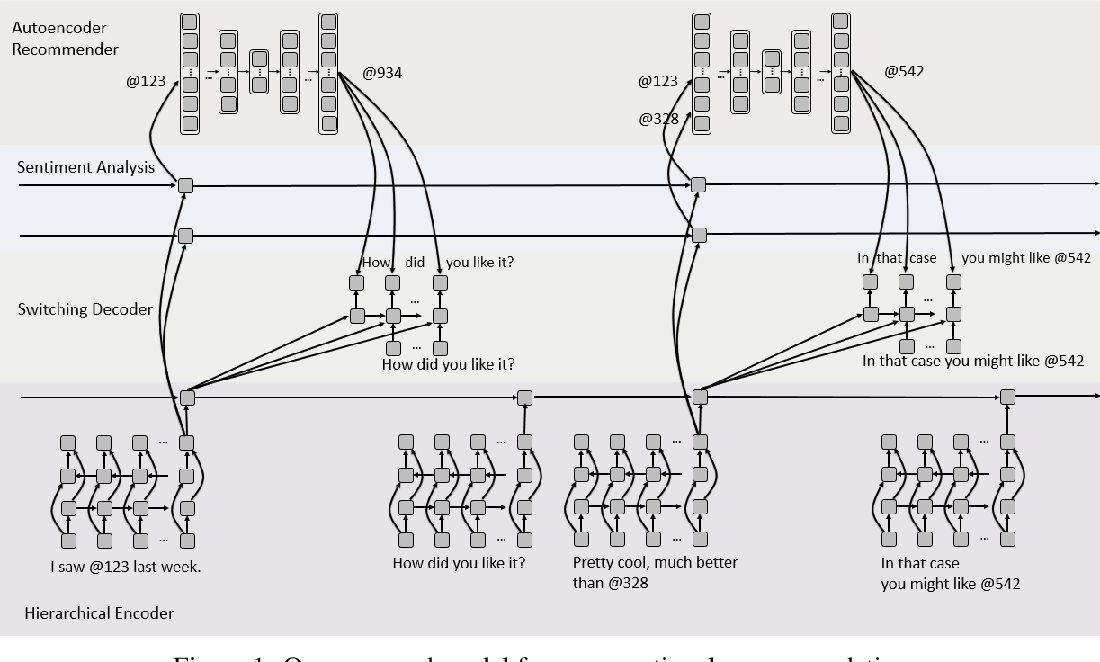 There has been growing interest in using neural networks and deep learning techniques to create dialogue systems. Conversational recommendation is an interesting setting for the scientific exploration of dialogue with natural language as the associated discourse involves goal-driven dialogue that often transforms naturally into more free-form chat. This paper provides two contributions. First, until now there has been no publicly available large-scale dataset consisting of real-world dialogues centered around recommendations. To address this issue and to facilitate our exploration here, we have collected ReDial, a dataset consisting of over 10,000 conversations centered around the theme of providing movie recommendations. We make this data available to the community for further research. Second, we use this dataset to explore multiple facets of conversational recommendations. In particular we explore new neural architectures, mechanisms, and methods suitable for composing conversational recommendation systems. Our dataset allows us to systematically probe model sub-components addressing different parts of the overall problem domain ranging from: sentiment analysis and cold-start recommendation generation to detailed aspects of how natural language is used in this setting in the real world. We combine such sub-components into a full-blown dialogue system and examine its behavior. 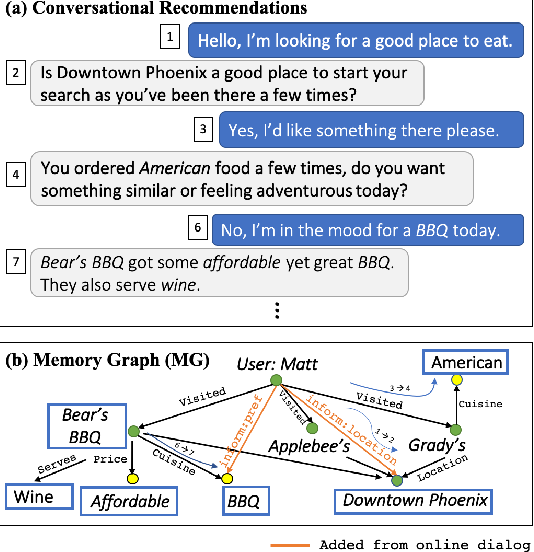 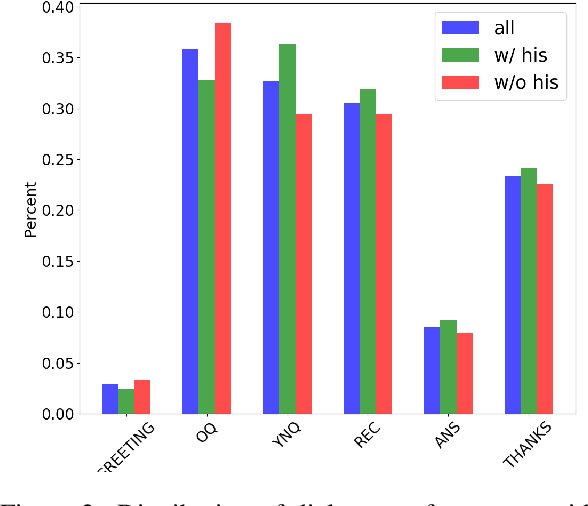 We study a conversational recommendation model which dynamically manages users' past (offline) preferences and current (online) requests through a structured and cumulative user memory knowledge graph, to allow for natural interactions and accurate recommendations. For this study, we create a new Memory Graph (MG) <--> Conversational Recommendation parallel corpus called MGConvRex with 7K+ human-to-human role-playing dialogs, grounded on a large-scale user memory bootstrapped from real-world user scenarios. MGConvRex captures human-level reasoning over user memory and has disjoint training/testing sets of users for zero-shot (cold-start) reasoning for recommendation. We propose a simple yet expandable formulation for constructing and updating the MG, and a reasoning model that predicts optimal dialog policies and recommendation items in unconstrained graph space. The prediction of our proposed model inherits the graph structure, providing a natural way to explain the model's recommendation. Experiments are conducted for both offline metrics and online simulation, showing competitive results.

A Comprehensive Overview of Recommender System and Sentiment Analysis 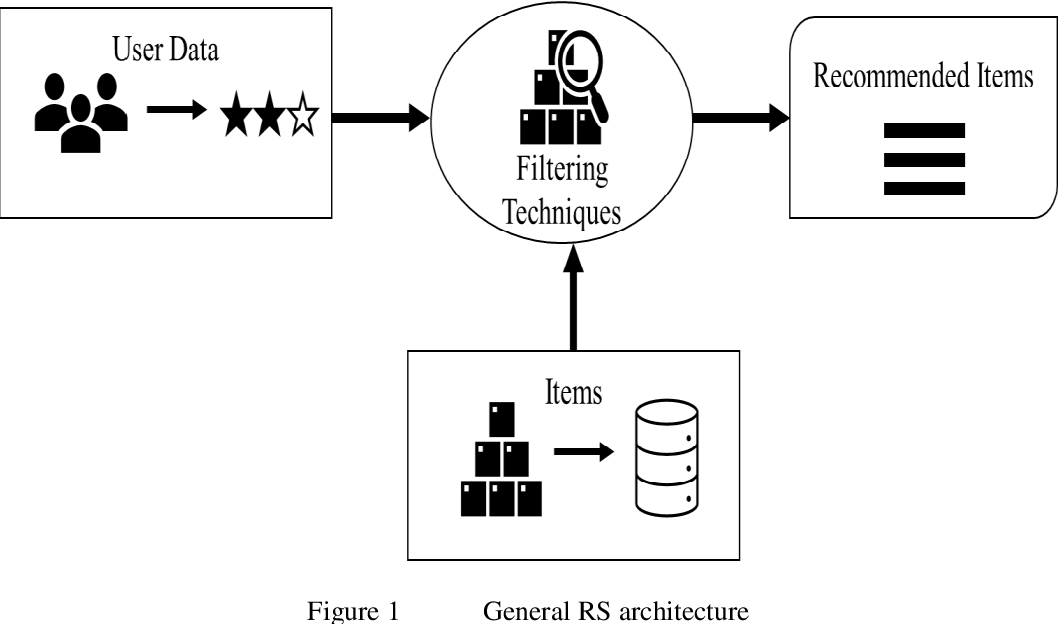 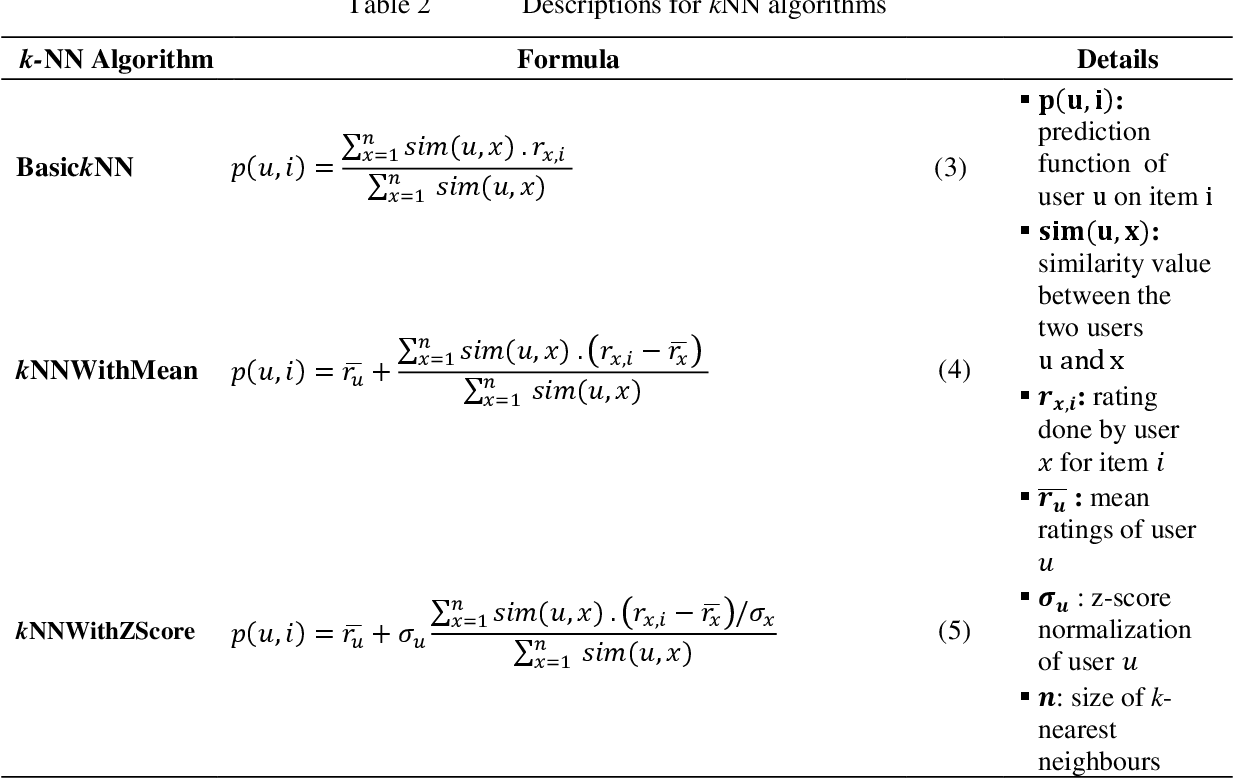 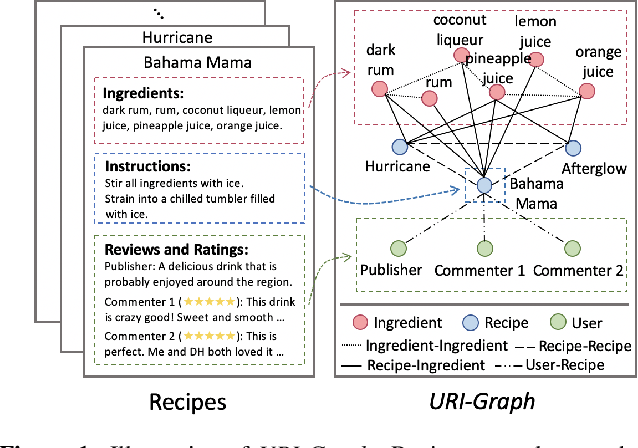 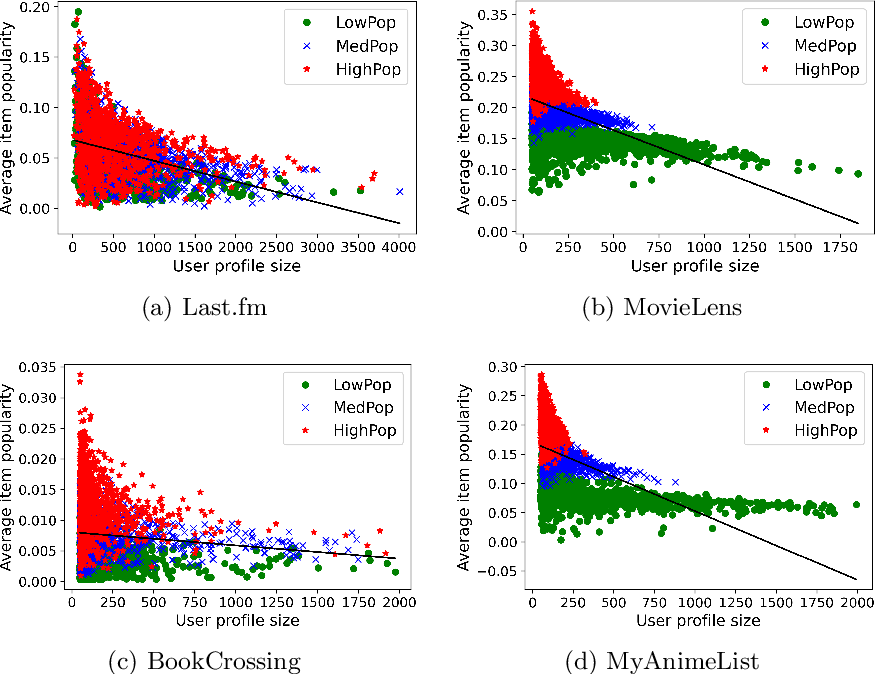 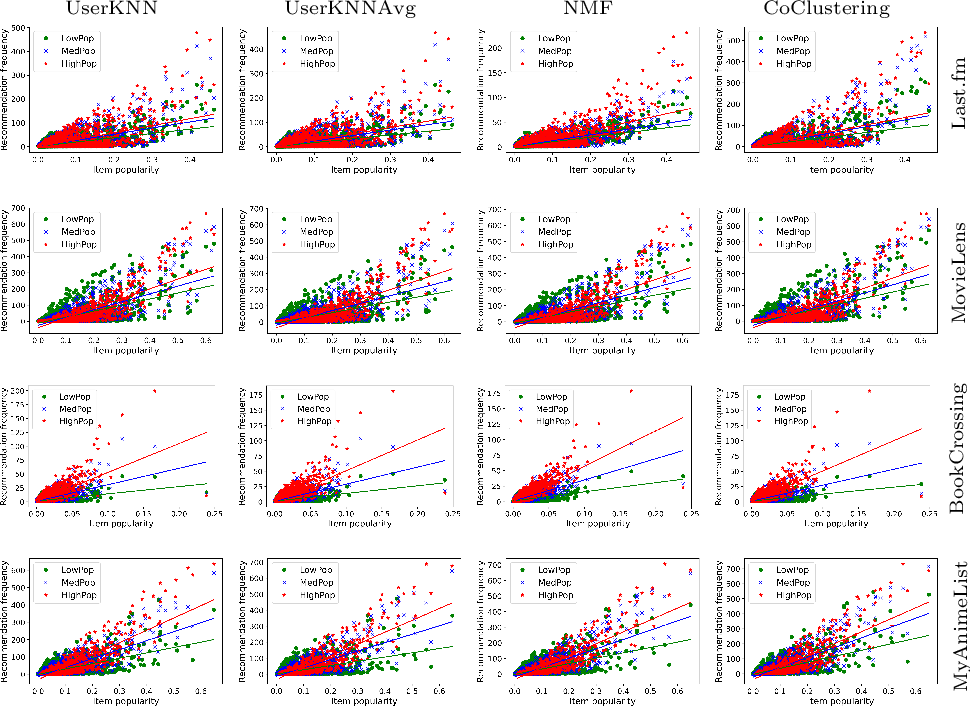 Multimedia recommender systems suggest media items, e.g., songs, (digital) books and movies, to users by utilizing concepts of traditional recommender systems such as collaborative filtering. In this paper, we investigate a potential issue of such collaborative-filtering based multimedia recommender systems, namely popularity bias that leads to the underrepresentation of unpopular items in the recommendation lists. Therefore, we study four multimedia datasets, i.e., LastFm, MovieLens, BookCrossing and MyAnimeList, that we each split into three user groups differing in their inclination to popularity, i.e., LowPop, MedPop and HighPop. Using these user groups, we evaluate four collaborative filtering-based algorithms with respect to popularity bias on the item and the user level. Our findings are three-fold: firstly, we show that users with little interest into popular items tend to have large user profiles and thus, are important data sources for multimedia recommender systems. Secondly, we find that popular items are recommended more frequently than unpopular ones. Thirdly, we find that users with little interest into popular items receive significantly worse recommendations than users with medium or high interest into popularity.