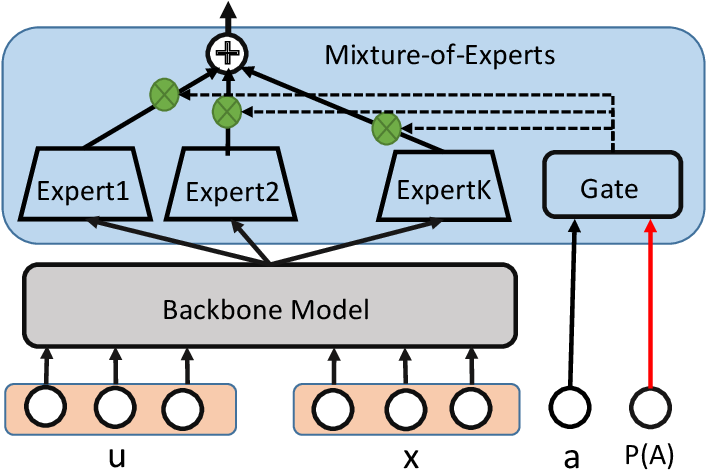 In recommender system, some feature directly affects whether an interaction would happen, making the happened interactions not necessarily indicate user preference. For instance, short videos are objectively easier to be finished even though the user does not like the video. We term such feature as confounding feature, and video length is a confounding feature in video recommendation. If we fit a model on such interaction data, just as done by most data-driven recommender systems, the model will be biased to recommend short videos more, and deviate from user actual requirement. This work formulates and addresses the problem from the causal perspective. Assuming there are some factors affecting both the confounding feature and other item features, e.g., the video creator, we find the confounding feature opens a backdoor path behind user item matching and introduces spurious correlation. To remove the effect of backdoor path, we propose a framework named Deconfounding Causal Recommendation (DCR), which performs intervened inference with do-calculus. Nevertheless, evaluating do calculus requires to sum over the prediction on all possible values of confounding feature, significantly increasing the time cost. To address the efficiency challenge, we further propose a mixture-of experts (MoE) model architecture, modeling each value of confounding feature with a separate expert module. Through this way, we retain the model expressiveness with few additional costs. We demonstrate DCR on the backbone model of neural factorization machine (NFM), showing that DCR leads to more accurate prediction of user preference with small inference time cost.

In a variety of application domains the content to be recommended to users is associated with text. This includes research papers, movies with associated plot summaries, news articles, blog posts, etc. Recommendation approaches based on latent factor models can be extended naturally to leverage text by employing an explicit mapping from text to factors. This enables recommendations for new, unseen content, and may generalize better, since the factors for all items are produced by a compactly-parametrized model. Previous work has used topic models or averages of word embeddings for this mapping. In this paper we present a method leveraging deep recurrent neural networks to encode the text sequence into a latent vector, specifically gated recurrent units (GRUs) trained end-to-end on the collaborative filtering task. For the task of scientific paper recommendation, this yields models with significantly higher accuracy. In cold-start scenarios, we beat the previous state-of-the-art, all of which ignore word order. Performance is further improved by multi-task learning, where the text encoder network is trained for a combination of content recommendation and item metadata prediction. This regularizes the collaborative filtering model, ameliorating the problem of sparsity of the observed rating matrix. 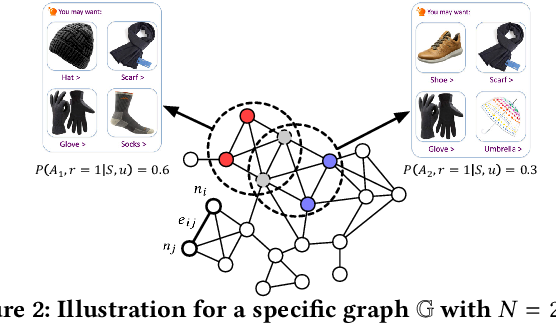 This paper targets to a novel but practical recommendation problem named exact-K recommendation. It is different from traditional top-K recommendation, as it focuses more on (constrained) combinatorial optimization which will optimize to recommend a whole set of K items called card, rather than ranking optimization which assumes that "better" items should be put into top positions. Thus we take the first step to give a formal problem definition, and innovatively reduce it to Maximum Clique Optimization based on graph. To tackle this specific combinatorial optimization problem which is NP-hard, we propose Graph Attention Networks (GAttN) with a Multi-head Self-attention encoder and a decoder with attention mechanism. It can end-to-end learn the joint distribution of the K items and generate an optimal card rather than rank individual items by prediction scores. Then we propose Reinforcement Learning from Demonstrations (RLfD) which combines the advantages in behavior cloning and reinforcement learning, making it sufficient- and-efficient to train the model. Extensive experiments on three datasets demonstrate the effectiveness of our proposed GAttN with RLfD method, it outperforms several strong baselines with a relative improvement of 7.7% and 4.7% on average in Precision and Hit Ratio respectively, and achieves state-of-the-art (SOTA) performance for the exact-K recommendation problem.

Most work in graph-based recommender systems considers a {\em static} setting where all information about test nodes (i.e., users and items) is available upfront at training time. However, this static setting makes little sense for many real-world applications where data comes in continuously as a stream of new edges and nodes, and one has to update model predictions incrementally to reflect the latest state. To fully capitalize on the newly available data in the stream, recent graph-based recommendation models would need to be repeatedly retrained, which is infeasible in practice. In this paper, we study the graph-based streaming recommendation setting and propose a compositional recommendation model -- Lightweight Compositional Embedding (LCE) -- that supports incremental updates under low computational cost. Instead of learning explicit embeddings for the full set of nodes, LCE learns explicit embeddings for only a subset of nodes and represents the other nodes {\em implicitly}, through a composition function based on their interactions in the graph. This provides an effective, yet efficient, means to leverage streaming graph data when one node type (e.g., items) is more amenable to static representation. We conduct an extensive empirical study to compare LCE to a set of competitive baselines on three large-scale user-item recommendation datasets with interactions under a streaming setting. The results demonstrate the superior performance of LCE, showing that it achieves nearly skyline performance with significantly fewer parameters than alternative graph-based models.

Algorithmic fairness for artificial intelligence has become increasingly relevant as these systems become more pervasive in society. One realm of AI, recommender systems, presents unique challenges for fairness due to trade offs between optimizing accuracy for users and fairness to providers. But what is fair in the context of recommendation--particularly when there are multiple stakeholders? In an initial exploration of this problem, we ask users what their ideas of fair treatment in recommendation might be, and why. We analyze what might cause discrepancies or changes between user's opinions towards fairness to eventually help inform the design of fairer and more transparent recommendation algorithms. 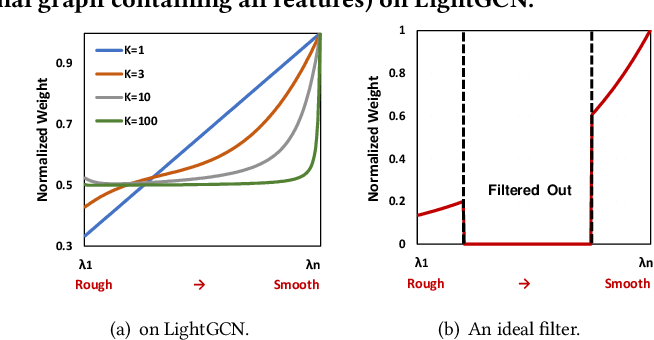 As much as Graph Convolutional Networks (GCNs) have shown tremendous success in recommender systems and collaborative filtering (CF), the mechanism of how they, especially the core components (\textit{i.e.,} neighborhood aggregation) contribute to recommendation has not been well studied. To unveil the effectiveness of GCNs for recommendation, we first analyze them in a spectral perspective and discover two important findings: (1) only a small portion of spectral graph features that emphasize the neighborhood smoothness and difference contribute to the recommendation accuracy, whereas most graph information can be considered as noise that even reduces the performance, and (2) repetition of the neighborhood aggregation emphasizes smoothed features and filters out noise information in an ineffective way. Based on the two findings above, we propose a new GCN learning scheme for recommendation by replacing neihgborhood aggregation with a simple yet effective Graph Denoising Encoder (GDE), which acts as a band pass filter to capture important graph features. We show that our proposed method alleviates the over-smoothing and is comparable to an indefinite-layer GCN that can take any-hop neighborhood into consideration. Finally, we dynamically adjust the gradients over the negative samples to expedite model training without introducing additional complexity. Extensive experiments on five real-world datasets show that our proposed method not only outperforms state-of-the-arts but also achieves 12x speedup over LightGCN. 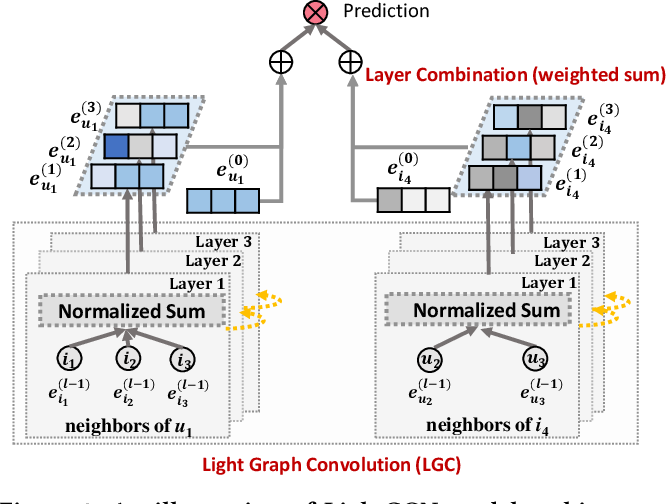 Graph Convolution Network (GCN) has become new state-of-the-art for collaborative filtering. Nevertheless, the reasons of its effectiveness for recommendation are not well understood. Existing work that adapts GCN to recommendation lacks thorough ablation analyses on GCN, which is originally designed for graph classification tasks and equipped with many neural network operations. However, we empirically find that the two most common designs in GCNs --- feature transformation and nonlinear activation --- contribute little to the performance of collaborative filtering. Even worse, including them adds to the difficulty of training and degrades recommendation performance. In this work, we aim to simplify the design of GCN to make it more concise and appropriate for recommendation. We propose a new model named LightGCN, including only the most essential component in GCN --- neighborhood aggregation --- for collaborative filtering. Specifically, LightGCN learns user and item embeddings by linearly propagating them on the user-item interaction graph, and uses the weighted sum of the embeddings learned at all layers as the final embedding. Such simple, linear, and neat model is much easier to implement and train, exhibiting substantial improvements (about 16.5\% relative improvement on average) over Neural Graph Collaborative Filtering (NGCF) --- a state-of-the-art GCN-based recommender model --- under exactly the same experimental setting. Further analyses are provided towards the rationality of the simple LightGCN from both analytical and empirical perspectives. 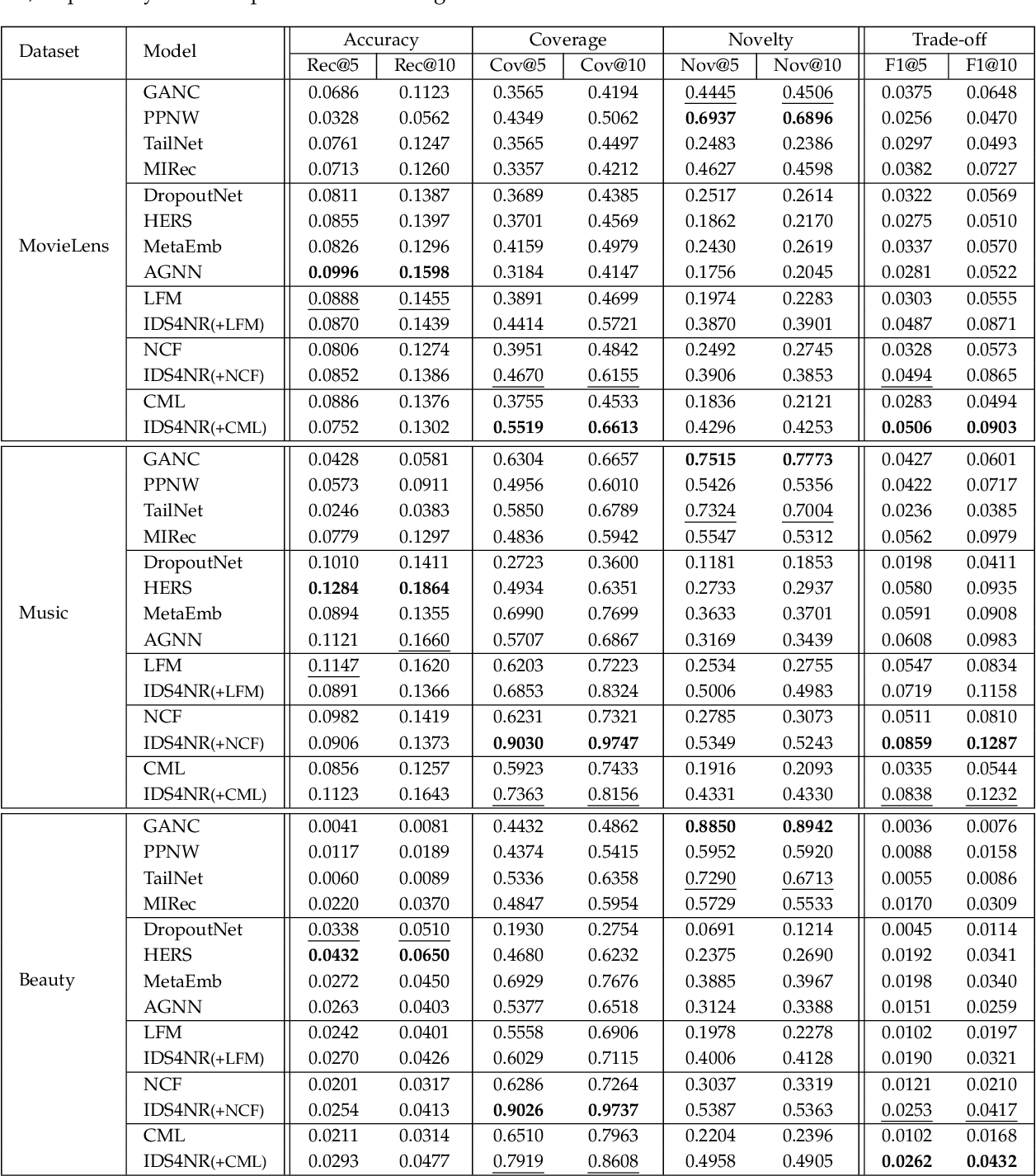 One key property in recommender systems is the long-tail distribution in user-item interactions where most items only have few user feedback. Improving the recommendation of tail items can promote novelty and bring positive effects to both users and providers, and thus is a desirable property of recommender systems. Current novel recommendation studies over-emphasize the importance of tail items without differentiating the degree of users' intent on popularity and often incur a sharp decline of accuracy. Moreover, none of existing methods has ever taken the extreme case of tail items, i.e., cold-start items without any interaction, into consideration. In this work, we first disclose the mechanism that drives a user's interaction towards popular or niche items by disentangling her intent into conformity influence (popularity) and personal interests (preference). We then present a unified end-to-end framework to simultaneously optimize accuracy and novelty targets based on the disentangled intent of popularity and that of preference. We further develop a new paradigm for novel recommendation of cold-start items which exploits the self-supervised learning technique to model the correlation between collaborative features and content features. We conduct extensive experimental results on three real-world datasets. The results demonstrate that our proposed model yields significant improvements over the state-of-the-art baselines in terms of accuracy, novelty, coverage, and trade-off. 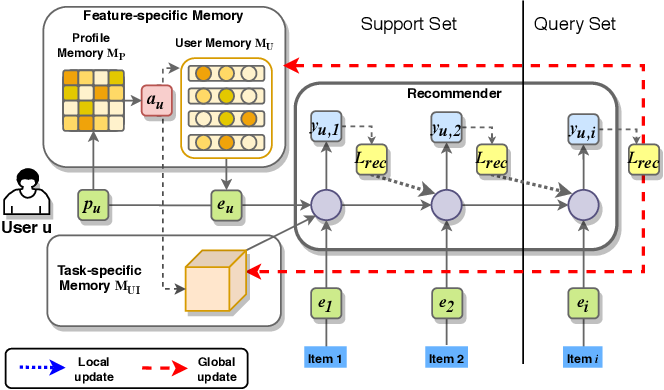 A common challenge for most current recommender systems is the cold-start problem. Due to the lack of user-item interactions, the fine-tuned recommender systems are unable to handle situations with new users or new items. Recently, some works introduce the meta-optimization idea into the recommendation scenarios, i.e. predicting the user preference by only a few of past interacted items. The core idea is learning a global sharing initialization parameter for all users and then learning the local parameters for each user separately. However, most meta-learning based recommendation approaches adopt model-agnostic meta-learning for parameter initialization, where the global sharing parameter may lead the model into local optima for some users. In this paper, we design two memory matrices that can store task-specific memories and feature-specific memories. Specifically, the feature-specific memories are used to guide the model with personalized parameter initialization, while the task-specific memories are used to guide the model fast predicting the user preference. And we adopt a meta-optimization approach for optimizing the proposed method. We test the model on two widely used recommendation datasets and consider four cold-start situations. The experimental results show the effectiveness of the proposed methods.