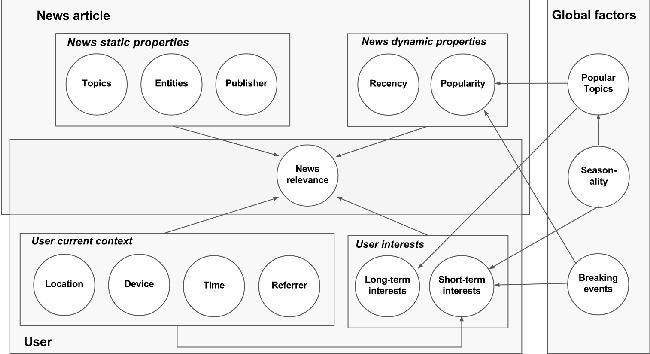 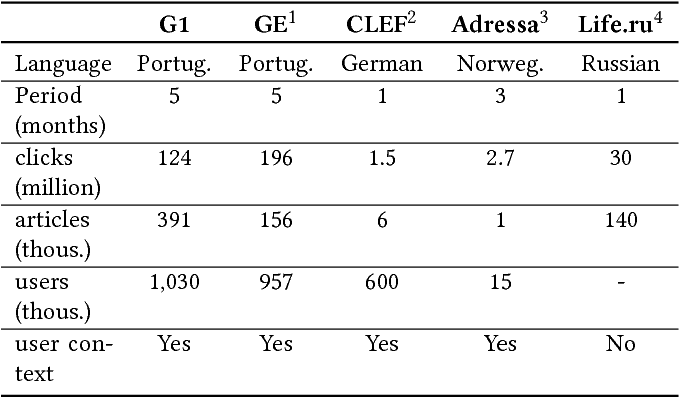 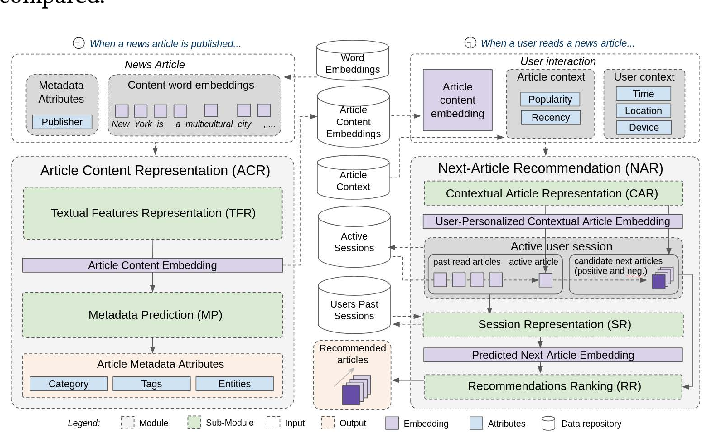 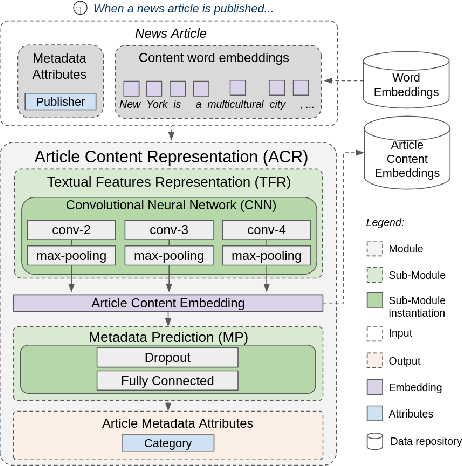 Recommender Systems (RS) have became a popular research topic and, since 2016, Deep Learning methods and techniques have been increasingly explored in this area. News RS are aimed to personalize users experiences and help them discover relevant articles from a large and dynamic search space. The main contribution of this research was named CHAMELEON, a Deep Learning meta-architecture designed to tackle the specific challenges of news recommendation. It consists of a modular reference architecture which can be instantiated using different neural building blocks. As information about users' past interactions is scarce in the news domain, the user context can be leveraged to deal with the user cold-start problem. Articles' content is also important to tackle the item cold-start problem. Additionally, the temporal decay of items (articles) relevance is very accelerated in the news domain. Furthermore, external breaking events may temporally attract global readership attention, a phenomenon generally known as concept drift in machine learning. All those characteristics are explicitly modeled on this research by a contextual hybrid session-based recommendation approach using Recurrent Neural Networks. The task addressed by this research is session-based news recommendation, i.e., next-click prediction using only information available in the current user session. A method is proposed for a realistic temporal offline evaluation of such task, replaying the stream of user clicks and fresh articles being continuously published in a news portal. Experiments performed with two large datasets have shown the effectiveness of the CHAMELEON for news recommendation on many quality factors such as accuracy, item coverage, novelty, and reduced item cold-start problem, when compared to other traditional and state-of-the-art session-based recommendation algorithms.


* Phd. Thesis presented on Dec. 09, 2019 to the Instituto Tecnol\'ogico de Aeron\'autica (ITA), in partial fulfillment of the requirements for the degree of Doctor of Science in the Graduate Program of Electronics and Computing Engineering, Field of Informatics 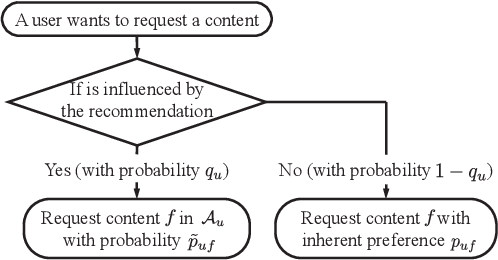 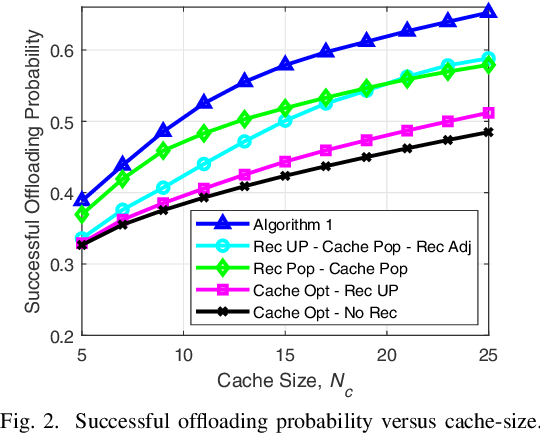 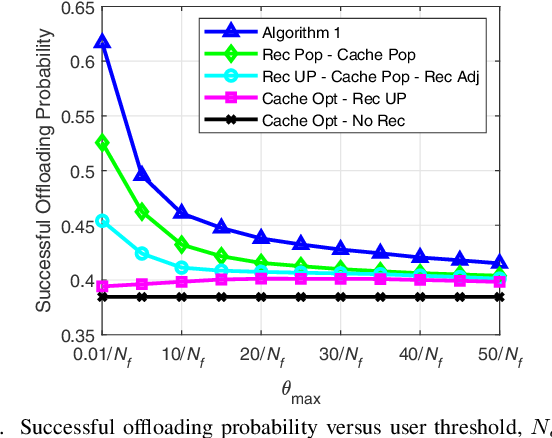 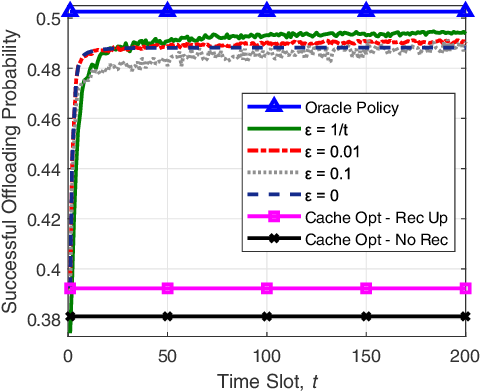 Recommendation system is able to shape user demands, which can be used for boosting caching gain. In this paper, we jointly optimize content caching and recommendation at base stations to maximize the caching gain meanwhile not compromising the user preference. We first propose a model to capture the impact of recommendation on user demands, which is controlled by a user-specific psychological threshold. We then formulate a joint caching and recommendation problem maximizing the successful offloading probability, which is a mixed integer programming problem. We develop a hierarchical iterative algorithm to solve the problem when the threshold is known. Since the user threshold is unknown in practice, we proceed to propose an $\varepsilon$-greedy algorithm to find the solution by learning the threshold via interactions with users. Simulation results show that the proposed algorithms improve the successful offloading probability compared with prior works with/without recommendation. The $\varepsilon$-greedy algorithm learns the user threshold quickly, and achieves more than $1-\varepsilon$ of the performance obtained by the algorithm with known threshold. 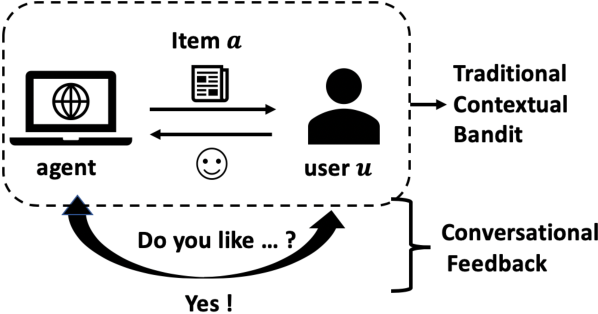 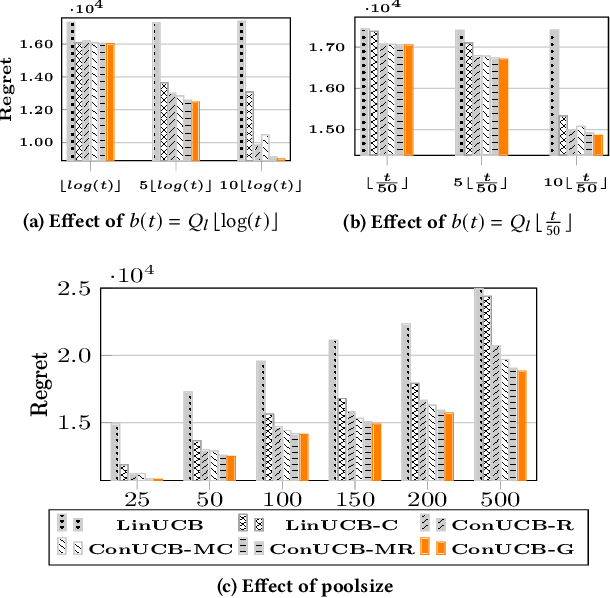 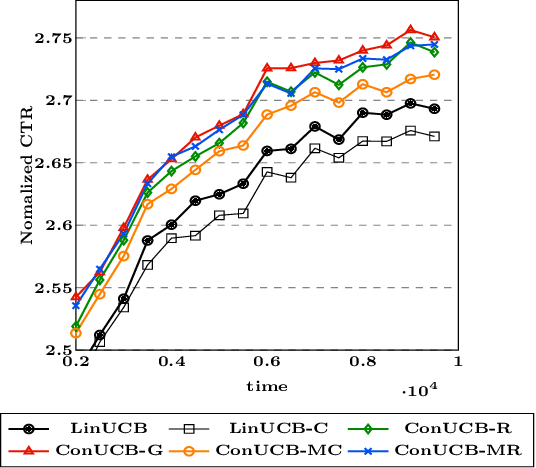 Contextual bandit algorithms have gained increasing popularity in recommender systems, because they can learn to adapt recommendations by making exploration-exploitation trade-off. Recommender systems equipped with traditional contextual bandit algorithms are usually trained with behavioral feedback (e.g., clicks) from users on items. The learning speed can be slow because behavioral feedback by nature does not carry sufficient information. As a result, extensive exploration has to be performed. To address the problem, we propose conversational recommendation in which the system occasionally asks questions to the user about her interest. We first generalize contextual bandit to leverage not only behavioral feedback (arm-level feedback), but also verbal feedback (users' interest on categories, topics, etc.). We then propose a new UCB- based algorithm, and theoretically prove that the new algorithm can indeed reduce the amount of exploration in learning. We also design several strategies for asking questions to further optimize the speed of learning. Experiments on synthetic data, Yelp data, and news recommendation data from Toutiao demonstrate the efficacy of the proposed algorithm. 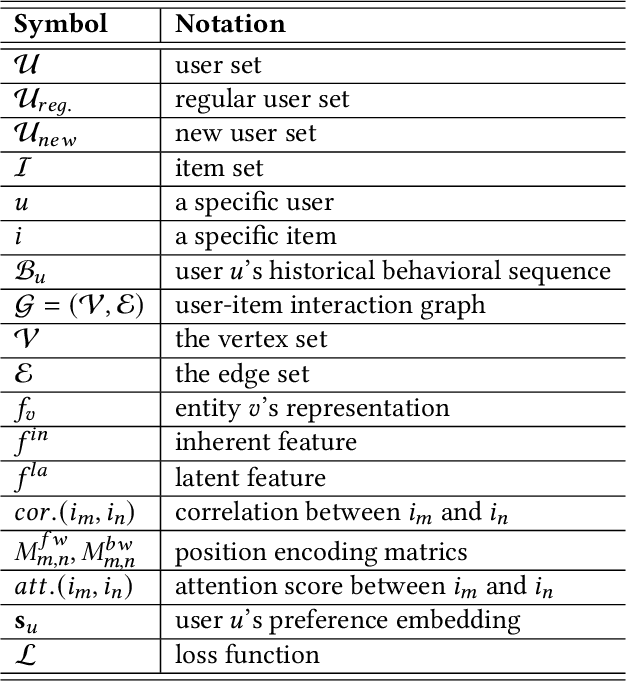 The cold-start recommendation is an urgent problem in contemporary online applications. It aims to provide users whose behaviors are literally sparse with as accurate recommendations as possible. Many data-driven algorithms, such as the widely used matrix factorization, underperform because of data sparseness. This work adopts the idea of meta-learning to solve the user's cold-start recommendation problem. We propose a meta-learning based cold-start sequential recommendation framework called metaCSR, including three main components: Diffusion Representer for learning better user/item embedding through information diffusion on the interaction graph; Sequential Recommender for capturing temporal dependencies of behavior sequences; Meta Learner for extracting and propagating transferable knowledge of prior users and learning a good initialization for new users. metaCSR holds the ability to learn the common patterns from regular users' behaviors and optimize the initialization so that the model can quickly adapt to new users after one or a few gradient updates to achieve optimal performance. The extensive quantitative experiments on three widely-used datasets show the remarkable performance of metaCSR in dealing with user cold-start problem. Meanwhile, a series of qualitative analysis demonstrates that the proposed metaCSR has good generalization. 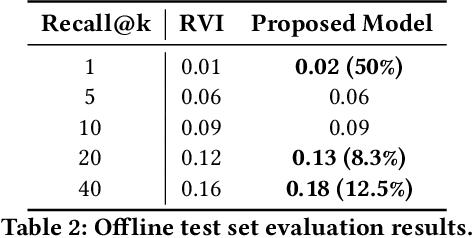 Recommender systems are an essential component of e-commerce marketplaces, helping consumers navigate massive amounts of inventory and find what they need or love. In this paper, we present an approach for generating personalized item recommendations in an e-commerce marketplace by learning to embed items and users in the same vector space. In order to alleviate the considerable cold-start problem present in large marketplaces, item and user embeddings are computed using content features and multi-modal onsite user activity respectively. Data ablation is incorporated into the offline model training process to improve the robustness of the production system. In offline evaluation using a dataset collected from eBay traffic, our approach was able to improve the [email protected] metric over the Recently-Viewed-Item (RVI) method. This approach to generating personalized recommendations has been launched to serve production traffic, and the corresponding scalable engineering architecture is also presented. Initial A/B test results show that compared to the current personalized recommendation module in production, the proposed method increases the surface rate by $\sim$6\% to generate recommendations for 90\% of listing page impressions.

Recommender systems have shown to be a successful representative of how data availability can ease our everyday digital life. However, data privacy is one of the most prominent concerns in the digital era. After several data breaches and privacy scandals, the users are now worried about sharing their data. In the last decade, Federated Learning has emerged as a new privacy-preserving distributed machine learning paradigm. It works by processing data on the user device without collecting data in a central repository. In this paper, we present FedeRank, a federated recommendation algorithm. The system learns a personal factorization model onto every device. The training of the global model is modeled as a synchronous process between the central server and the federated clients. FedeRank takes care of computing recommendations in a distributed fashion and allows users to control the portion and type of data they want to share. By comparing with state-of-the-art centralized algorithms, extensive experiments show the effectiveness of FedeRank in terms of recommendation accuracy, even with a small portion of shared user data. Further analysis of the recommendation lists' diversity and novelty guarantees the suitability of the algorithm in real production environments. 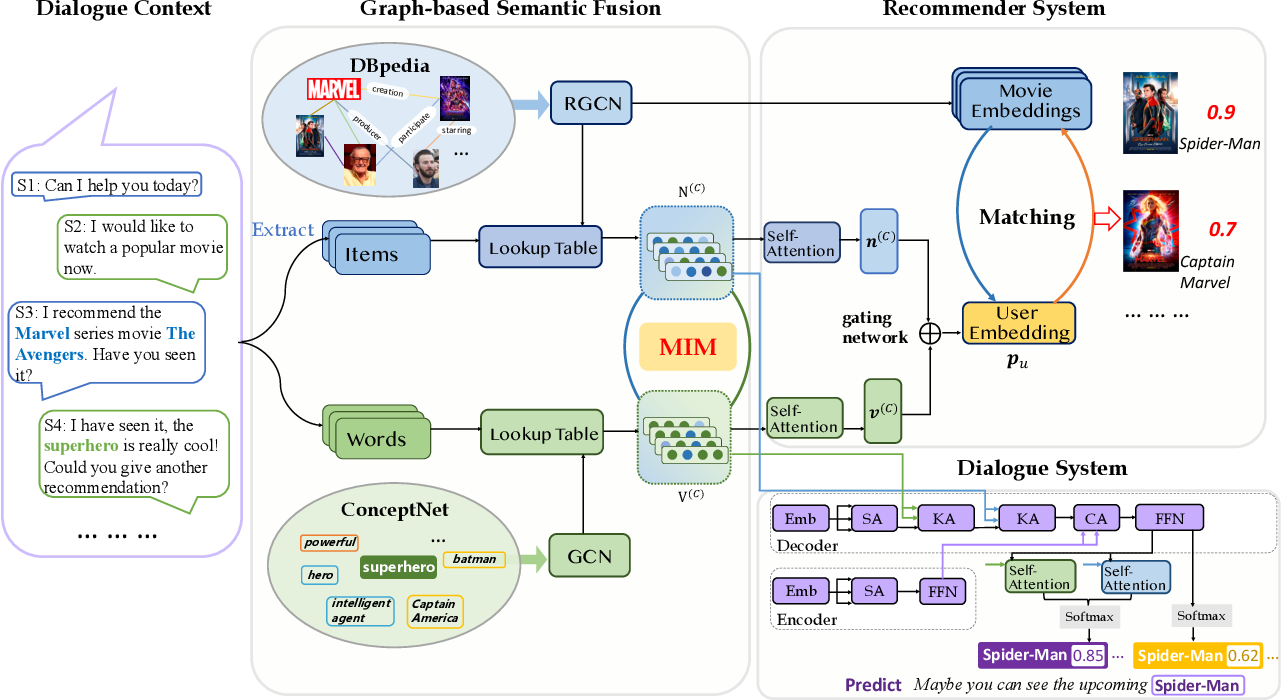 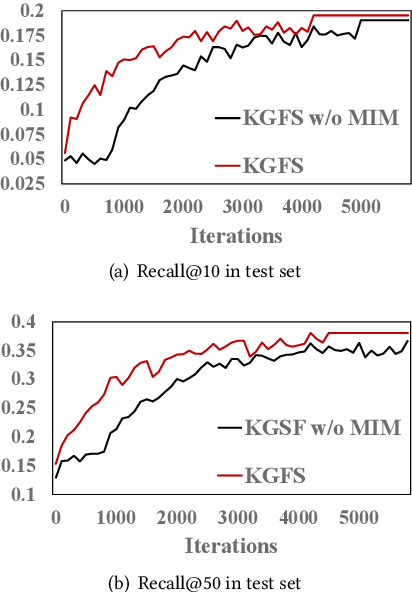 Conversational recommender systems (CRS) aim to recommend high-quality items to users through interactive conversations. Although several efforts have been made for CRS, two major issues still remain to be solved. First, the conversation data itself lacks of sufficient contextual information for accurately understanding users' preference. Second, there is a semantic gap between natural language expression and item-level user preference. To address these issues, we incorporate both word-oriented and entity-oriented knowledge graphs (KG) to enhance the data representations in CRSs, and adopt Mutual Information Maximization to align the word-level and entity-level semantic spaces. Based on the aligned semantic representations, we further develop a KG-enhanced recommender component for making accurate recommendations, and a KG-enhanced dialog component that can generate informative keywords or entities in the response text. Extensive experiments have demonstrated the effectiveness of our approach in yielding better performance on both recommendation and conversation tasks. 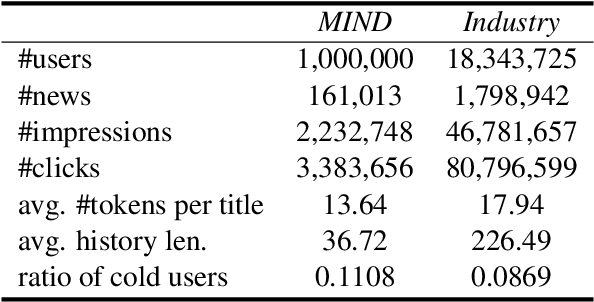 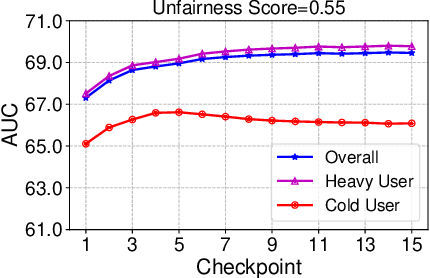 Big models are widely used by online recommender systems to boost recommendation performance. They are usually learned on historical user behavior data to infer user interest and predict future user behaviors (e.g., clicks). In fact, the behaviors of heavy users with more historical behaviors can usually provide richer clues than cold users in interest modeling and future behavior prediction. Big models may favor heavy users by learning more from their behavior patterns and bring unfairness to cold users. In this paper, we study whether big recommendation models are fair to cold users. We empirically demonstrate that optimizing the overall performance of big recommendation models may lead to unfairness to cold users in terms of performance degradation. To solve this problem, we propose a BigFair method based on self-distillation, which uses the model predictions on original user data as a teacher to regularize predictions on augmented data with randomly dropped user behaviors, which can encourage the model to fairly capture interest distributions of heavy and cold users. Experiments on two datasets show that BigFair can effectively improve the performance fairness of big recommendation models on cold users without harming the performance on heavy users. 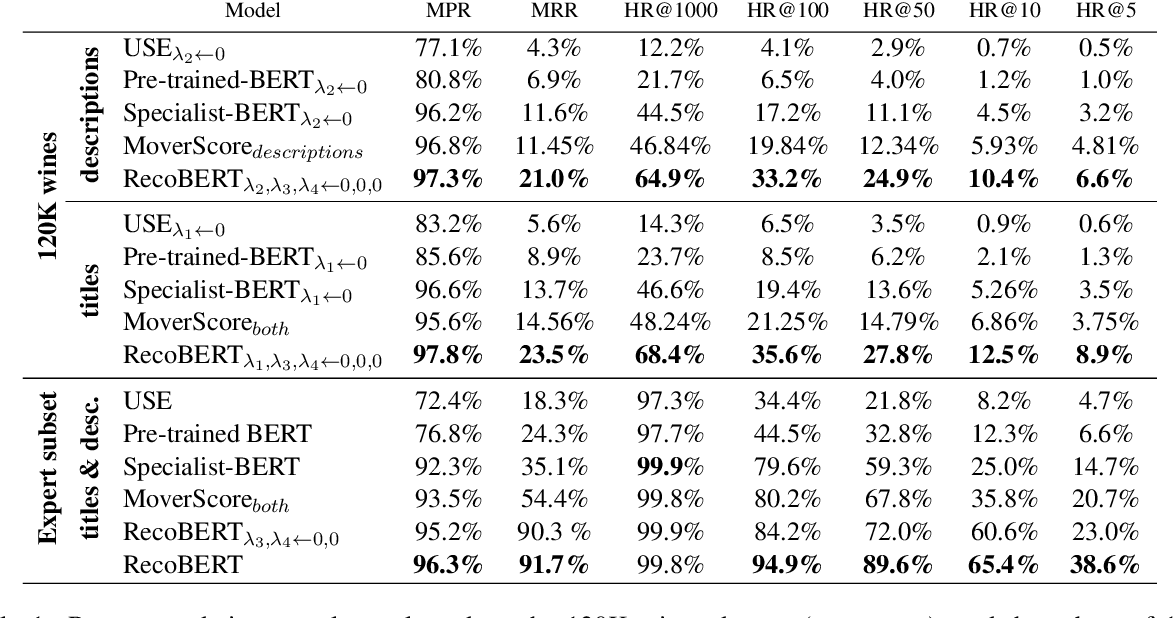 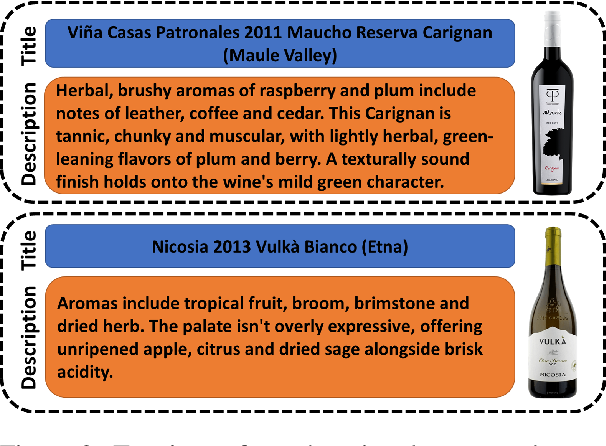 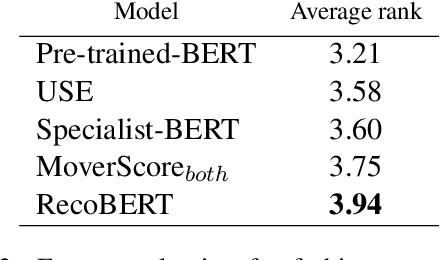 Language models that utilize extensive self-supervised pre-training from unlabeled text, have recently shown to significantly advance the state-of-the-art performance in a variety of language understanding tasks. However, it is yet unclear if and how these recent models can be harnessed for conducting text-based recommendations. In this work, we introduce RecoBERT, a BERT-based approach for learning catalog-specialized language models for text-based item recommendations. We suggest novel training and inference procedures for scoring similarities between pairs of items, that don't require item similarity labels. Both the training and the inference techniques were designed to utilize the unlabeled structure of textual catalogs, and minimize the discrepancy between them. By incorporating four scores during inference, RecoBERT can infer text-based item-to-item similarities more accurately than other techniques. In addition, we introduce a new language understanding task for wine recommendations using similarities based on professional wine reviews. As an additional contribution, we publish annotated recommendations dataset crafted by human wine experts. Finally, we evaluate RecoBERT and compare it to various state-of-the-art NLP models on wine and fashion recommendations tasks.