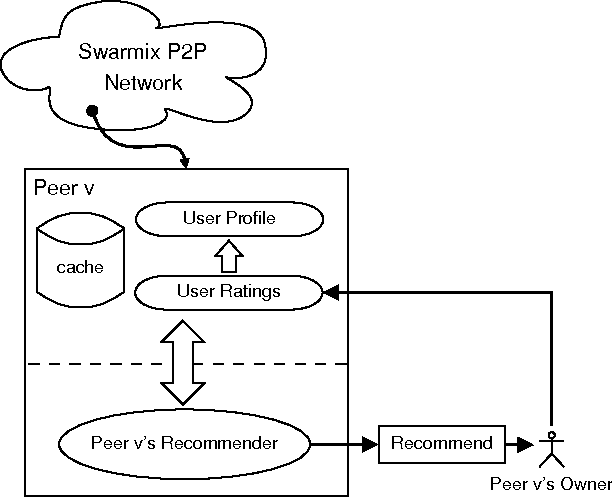 The advent of the Semantic Web necessitates paradigm shifts away from centralized client/server architectures towards decentralization and peer-to-peer computation, making the existence of central authorities superfluous and even impossible. At the same time, recommender systems are gaining considerable impact in e-commerce, providing people with recommendations that are personalized and tailored to their very needs. These recommender systems have traditionally been deployed with stark centralized scenarios in mind, operating in closed communities detached from their host network's outer perimeter. We aim at marrying these two worlds, i.e., decentralized peer-to-peer computing and recommender systems, in one agent-based framework. Our architecture features an epidemic-style protocol maintaining neighborhoods of like-minded peers in a robust, selforganizing fashion. In order to demonstrate our architecture's ability to retain scalability, robustness and to allow for convergence towards high-quality recommendations, we conduct offline experiments on top of the popular MovieLens dataset. 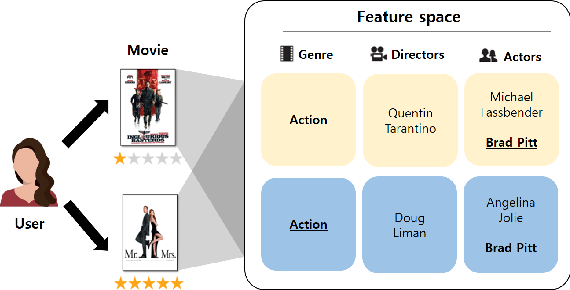 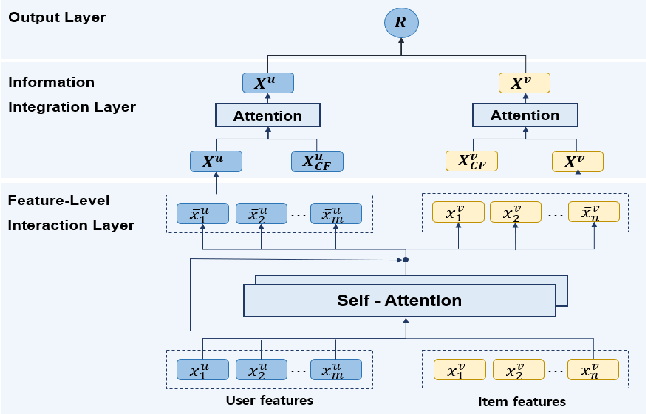 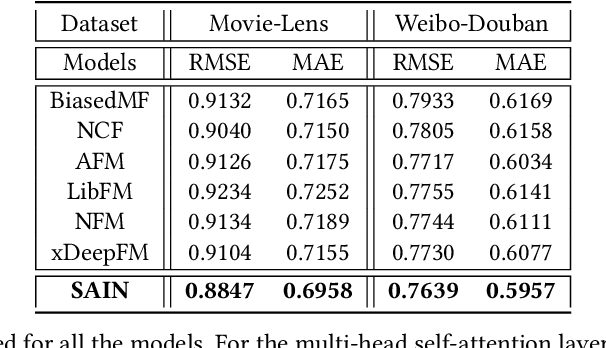 With the growing importance of personalized recommendation, numerous recommendation models have been proposed recently. Among them, Matrix Factorization (MF) based models are the most widely used in the recommendation field due to their high performance. However, MF based models suffer from cold start problems where user-item interactions are sparse. To deal with this problem, content based recommendation models which use the auxiliary attributes of users and items have been proposed. Since these models use auxiliary attributes, they are effective in cold start settings. However, most of the proposed models are either unable to capture complex feature interactions or not properly designed to combine user-item feedback information with content information. In this paper, we propose Self-Attentive Integration Network (SAIN) which is a model that effectively combines user-item feedback information and auxiliary information for recommendation task. In SAIN, a self-attention mechanism is used in the feature-level interaction layer to effectively consider interactions between multiple features, while the information integration layer adaptively combines content and feedback information. The experimental results on two public datasets show that our model outperforms the state-of-the-art models by 2.13%

DeepRec: An Open-source Toolkit for Deep Learning based Recommendation 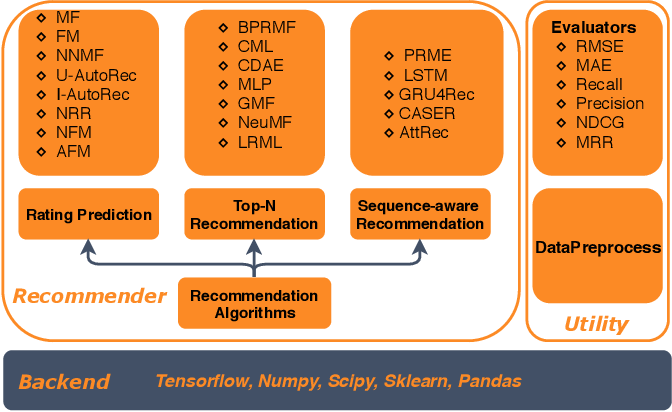 Deep learning based recommender systems have been extensively explored in recent years. However, the large number of models proposed each year poses a big challenge for both researchers and practitioners in reproducing the results for further comparisons. Although a portion of papers provides source code, they adopted different programming languages or different deep learning packages, which also raises the bar in grasping the ideas. To alleviate this problem, we released the open source project: \textbf{DeepRec}. In this toolkit, we have implemented a number of deep learning based recommendation algorithms using Python and the widely used deep learning package - Tensorflow. Three major recommendation scenarios: rating prediction, top-N recommendation (item ranking) and sequential recommendation, were considered. Meanwhile, DeepRec maintains good modularity and extensibility to easily incorporate new models into the framework. It is distributed under the terms of the GNU General Public License. The source code is available at github: \url{https://github.com/cheungdaven/DeepRec}


* 11 pages, 5 figures. This manuscript has been submitted to IEEE TKDE

Who to Watch Next: Two-side Interactive Networks for Live Broadcast Recommendation 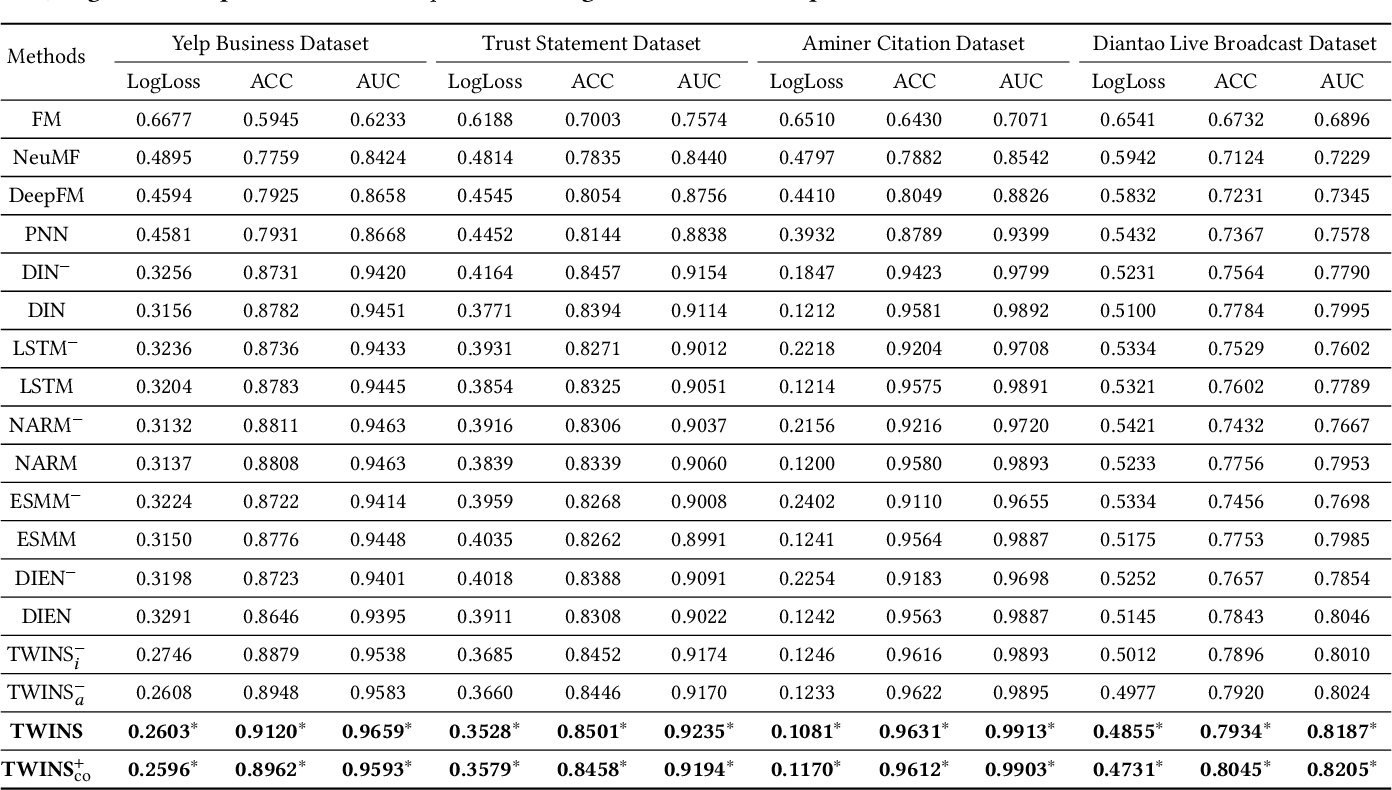 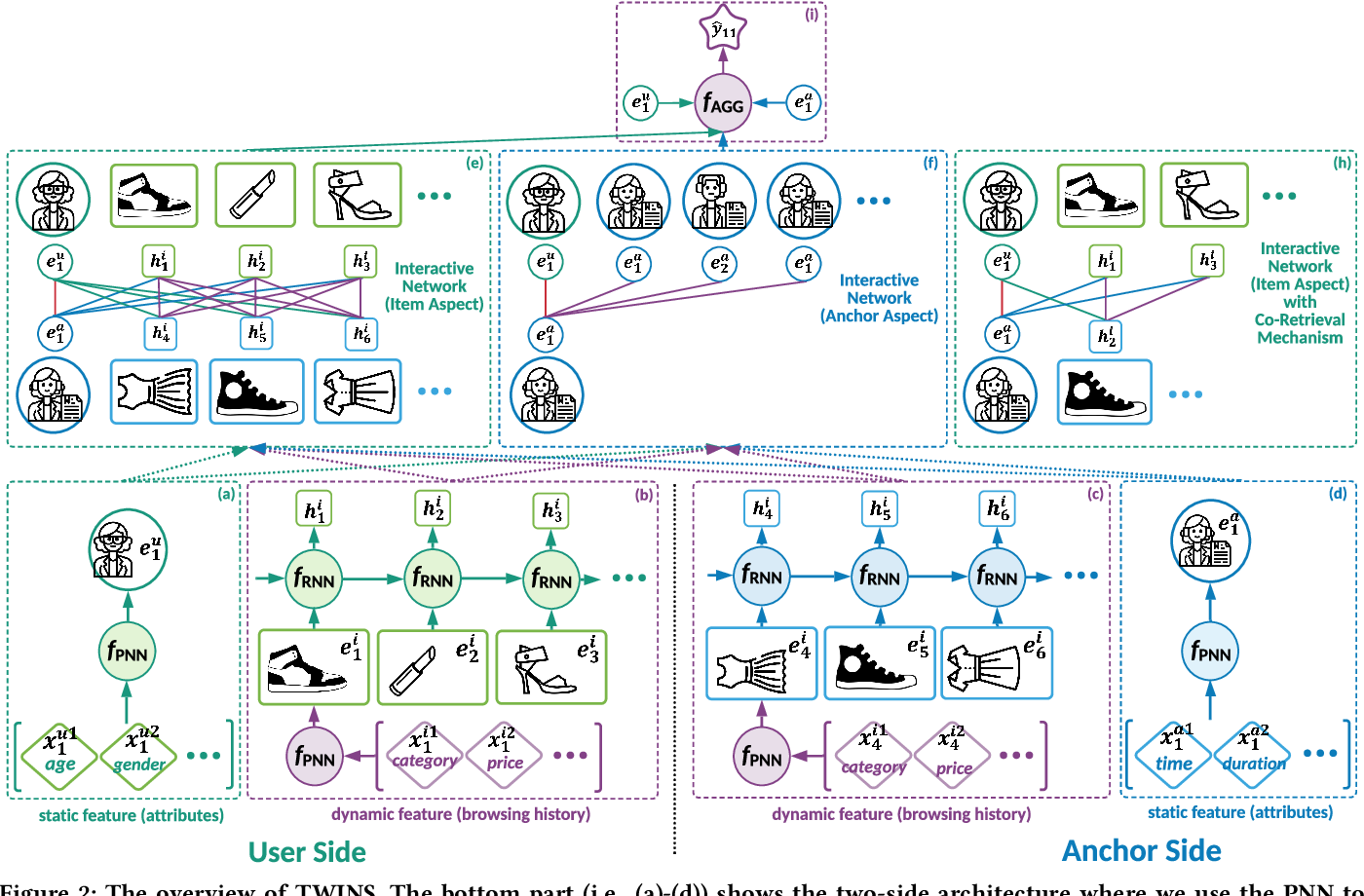 With the prevalence of live broadcast business nowadays, a new type of recommendation service, called live broadcast recommendation, is widely used in many mobile e-commerce Apps. Different from classical item recommendation, live broadcast recommendation is to automatically recommend user anchors instead of items considering the interactions among triple-objects (i.e., users, anchors, items) rather than binary interactions between users and items. Existing methods based on binary objects, ranging from early matrix factorization to recently emerged deep learning, obtain objects' embeddings by mapping from pre-existing features. Directly applying these techniques would lead to limited performance, as they are failing to encode collaborative signals among triple-objects. In this paper, we propose a novel TWo-side Interactive NetworkS (TWINS) for live broadcast recommendation. In order to fully use both static and dynamic information on user and anchor sides, we combine a product-based neural network with a recurrent neural network to learn the embedding of each object. In addition, instead of directly measuring the similarity, TWINS effectively injects the collaborative effects into the embedding process in an explicit manner by modeling interactive patterns between the user's browsing history and the anchor's broadcast history in both item and anchor aspects. Furthermore, we design a novel co-retrieval technique to select key items among massive historic records efficiently. Offline experiments on real large-scale data show the superior performance of the proposed TWINS, compared to representative methods; and further results of online experiments on Diantao App show that TWINS gains average performance improvement of around 8% on ACTR metric, 3% on UCTR metric, 3.5% on UCVR metric. 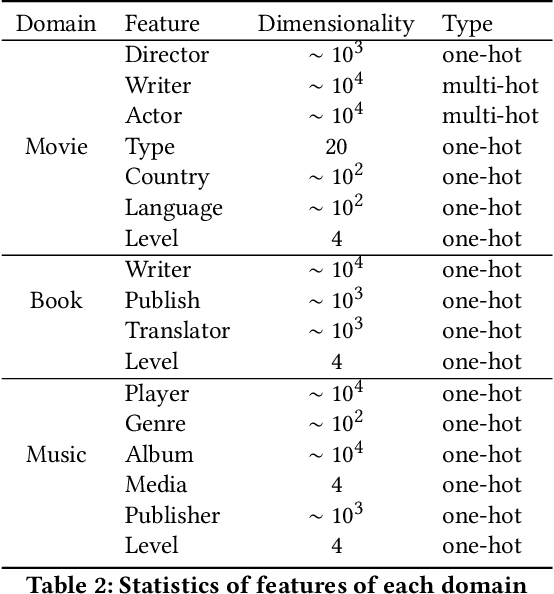 Cross-domain recommendation (CDR) has been attracting increasing attention of researchers for its ability to alleviate the data sparsity problem in recommender systems. However, the existing single-target or dual-target CDR methods often suffer from two drawbacks, the assumption of at least one rich domain and the heavy dependence on domain-invariant preference, which are impractical in real world where sparsity is ubiquitous and might degrade the user preference learning. To overcome these issues, we propose a Multi-Sparse-Domain Collaborative Recommendation (MSDCR) model for multi-target cross-domain recommendation. Unlike traditional CDR methods, MSDCR treats the multiple relevant domains as all sparse and can simultaneously improve the recommendation performance in each domain. We propose a Multi-Domain Separation Network (MDSN) and a Gated Aspect Preference Enhancement (GAPE) module for MSDCR to enhance a user's domain-specific aspect preferences in a domain by transferring the complementary aspect preferences in other domains, during which the uniqueness of the domain-specific preference can be preserved through the adversarial training offered by MDSN and the complementarity can be adaptively determined by GAPE. Meanwhile, we propose a Multi-Domain Adaptation Network (MDAN) for MSDCR to capture a user's domain-invariant aspect preference. With the integration of the enhanced domain-specific aspect preference and the domain-invariant aspect preference, MSDCR can reach a comprehensive understanding of a user's preference in each sparse domain. At last, the extensive experiments conducted on real datasets demonstrate the remarkable superiority of MSDCR over the state-of-the-art single-domain recommendation models and CDR models. 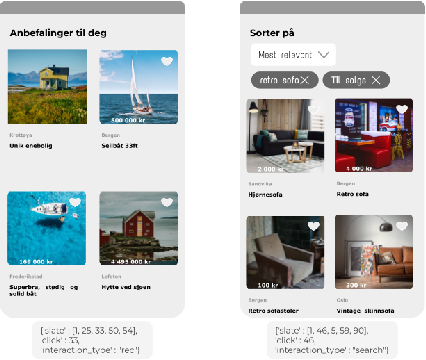 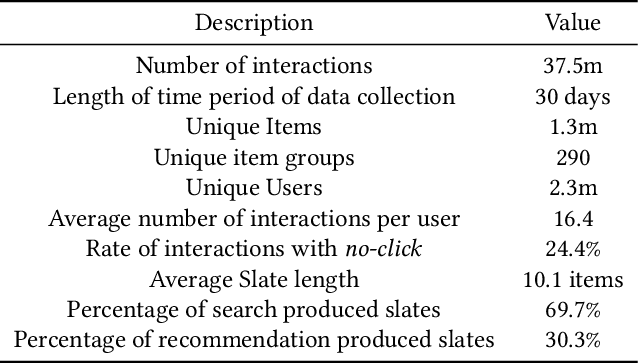 We present a novel recommender systems dataset that records the sequential interactions between users and an online marketplace. The users are sequentially presented with both recommendations and search results in the form of ranked lists of items, called slates, from the marketplace. The dataset includes the presented slates at each round, whether the user clicked on any of these items and which item the user clicked on. Although the usage of exposure data in recommender systems is growing, to our knowledge there is no open large-scale recommender systems dataset that includes the slates of items presented to the users at each interaction. As a result, most articles on recommender systems do not utilize this exposure information. Instead, the proposed models only depend on the user's click responses, and assume that the user is exposed to all the items in the item universe at each step, often called uniform candidate sampling. This is an incomplete assumption, as it takes into account items the user might not have been exposed to. This way items might be incorrectly considered as not of interest to the user. Taking into account the actually shown slates allows the models to use a more natural likelihood, based on the click probability given the exposure set of items, as is prevalent in the bandit and reinforcement learning literature. \cite{Eide2021DynamicSampling} shows that likelihoods based on uniform candidate sampling (and similar assumptions) are implicitly assuming that the platform only shows the most relevant items to the user. This causes the recommender system to implicitly reinforce feedback loops and to be biased towards previously exposed items to the user. 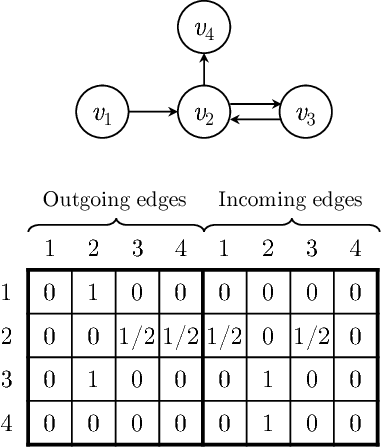 The problem of session-based recommendation aims to predict users' actions based on anonymous sessions. Previous methods on the session-based recommendation most model a session as a sequence and capture users' preference to make recommendations. Though achieved promising results, they fail to consider the complex items transitions among all session sequences, and are insufficient to obtain accurate users' preference in the session. To better capture the structure of the user-click sessions and take complex transitions of items into account, we propose a novel method, i.e. Session-based Recommendation with Graph Neural Networks, SR-GNN for brevity. In the proposed method, session sequences are aggregated together and modeled as graph-structure data. Based on this graph, GNN can capture complex transitions of items, which are difficult to be revealed by the conventional sequential methods. Each session is then represented as the composition of the global preference and current interests of the session using an attention network. Extensive experiments conducted on two real datasets show that SR-GNN evidently outperforms the state-of-the-art session-based recommendation methods and always obtain stable performance with different connection schemes, session representations, and session lengths. 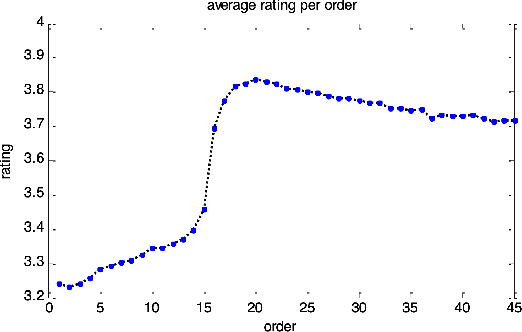 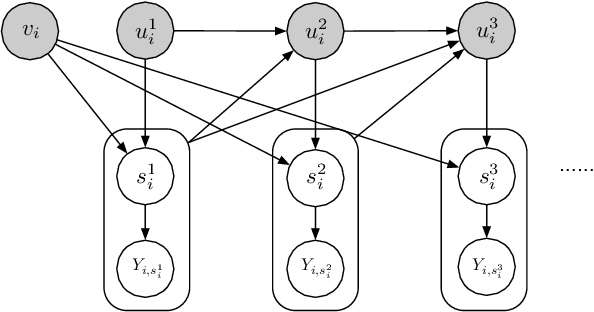 Selection bias is prevalent in the data for training and evaluating recommendation systems with explicit feedback. For example, users tend to rate items they like. However, when rating an item concerning a specific user, most of the recommendation algorithms tend to rely too much on his/her rating (feedback) history. This introduces implicit bias on the recommendation system, which is referred to as user feedback-loop bias in this paper. We propose a systematic and dynamic way to correct such bias and to obtain more diverse and objective recommendations by utilizing temporal rating information. Specifically, our method includes a deep-learning component to learn each user's dynamic rating history embedding for the estimation of the probability distribution of the items that the user rates sequentially. These estimated dynamic exposure probabilities are then used as propensity scores to train an inverse-propensity-scoring (IPS) rating predictor. We empirically validated the existence of such user feedback-loop bias in real world recommendation systems and compared the performance of our method with the baseline models that are either without de-biasing or with propensity scores estimated by other methods. The results show the superiority of our approach.

With increasing and extensive use of electronic health records, clinicians are often under time pressure when they need to retrieve important information efficiently among large amounts of patients' health records in clinics. While a search function can be a useful alternative to browsing through a patient's record, it is cumbersome for clinicians to search repeatedly for the same or similar information on similar patients. Under such circumstances, there is a critical need to build effective recommender systems that can generate accurate search term recommendations for clinicians. In this manuscript, we developed a hybrid collaborative filtering model using patients' encounter and search term information to recommend the next search terms for clinicians to retrieve important information fast in clinics. For each patient, the model will recommend terms that either have high co-occurrence frequencies with his/her most recent ICD codes or are highly relevant to the most recent search terms on this patient. We have conducted comprehensive experiments to evaluate the proposed model, and the experimental results demonstrate that our model can outperform all the state-of-the-art baseline methods for top-N search term recommendation on different datasets.