The increasing role of recommender systems in many aspects of society makes it essential to consider how such systems may impact social good. Various modifications to recommendation algorithms have been proposed to improve their performance for specific socially relevant measures. However, previous proposals are often not easily adapted to different measures, and they generally require the ability to modify either existing system inputs, the system's algorithm, or the system's outputs. As an alternative, in this paper we introduce the idea of improving the social desirability of recommender system outputs by adding more data to the input, an approach we view as as providing `antidote' data to the system. We formalize the antidote data problem, and develop optimization-based solutions. We take as our model system the matrix factorization approach to recommendation, and we propose a set of measures to capture the polarization or fairness of recommendations. We then show how to generate antidote data for each measure, pointing out a number of computational efficiencies, and discuss the impact on overall system accuracy. Our experiments show that a modest budget for antidote data can lead to significant improvements in the polarization or fairness of recommendations. 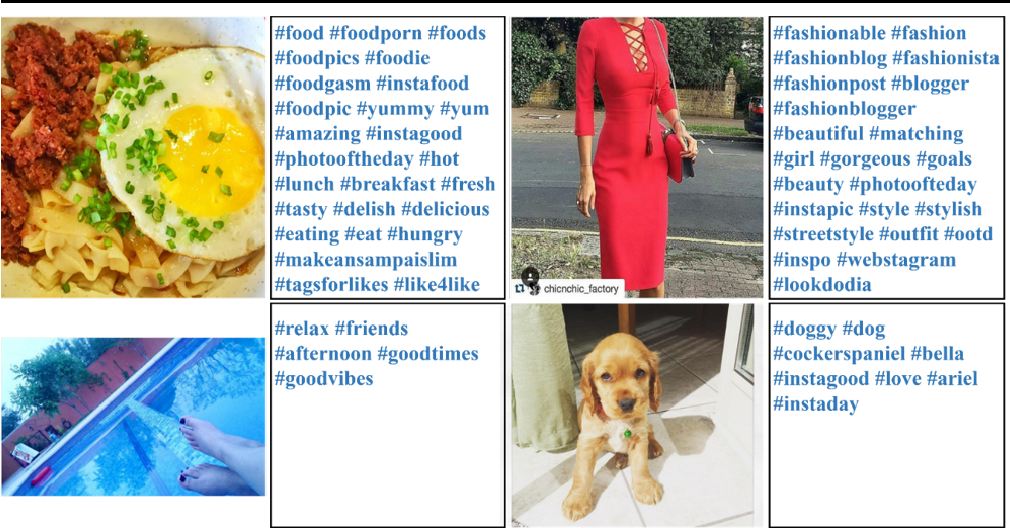 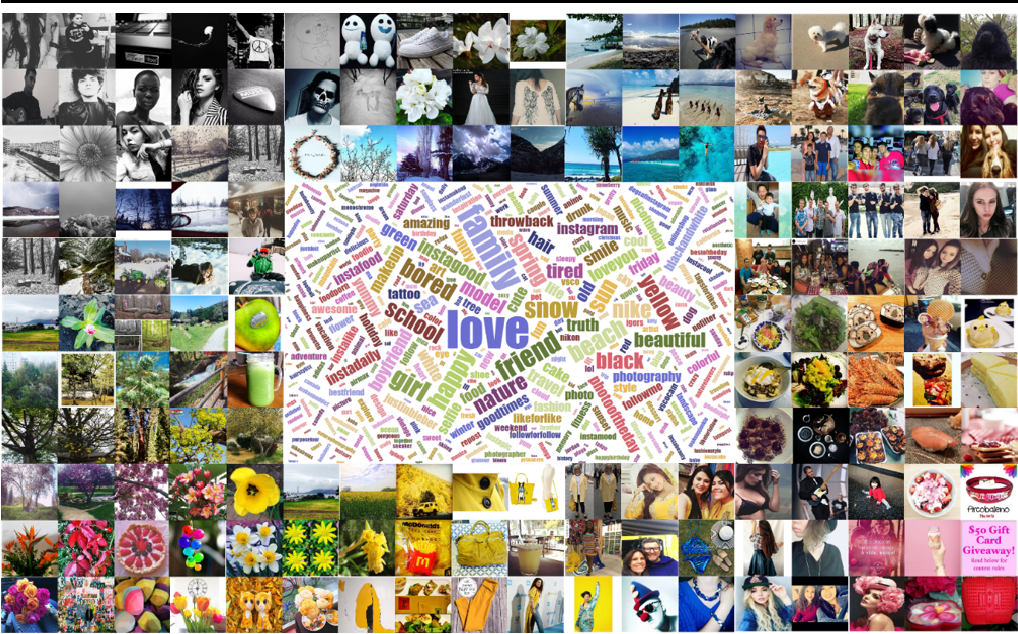 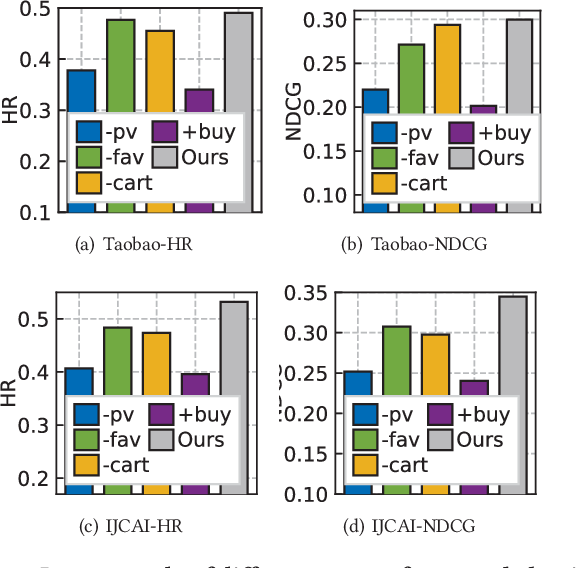 Modern recommender systems often embed users and items into low-dimensional latent representations, based on their observed interactions. In practical recommendation scenarios, users often exhibit various intents which drive them to interact with items with multiple behavior types (e.g., click, tag-as-favorite, purchase). However, the diversity of user behaviors is ignored in most of the existing approaches, which makes them difficult to capture heterogeneous relational structures across different types of interactive behaviors. Exploring multi-typed behavior patterns is of great importance to recommendation systems, yet is very challenging because of two aspects: i) The complex dependencies across different types of user-item interactions; ii) Diversity of such multi-behavior patterns may vary by users due to their personalized preference. To tackle the above challenges, we propose a Multi-Behavior recommendation framework with Graph Meta Network to incorporate the multi-behavior pattern modeling into a meta-learning paradigm. Our developed MB-GMN empowers the user-item interaction learning with the capability of uncovering type-dependent behavior representations, which automatically distills the behavior heterogeneity and interaction diversity for recommendations. Extensive experiments on three real-world datasets show the effectiveness of MB-GMN by significantly boosting the recommendation performance as compared to various state-of-the-art baselines. The source code is available athttps://github.com/akaxlh/MB-GMN.

The Simpson's Paradox in the Offline Evaluation of Recommendation Systems

Recommendation systems are often evaluated based on user's interactions that were collected from an existing, already deployed recommendation system. In this situation, users only provide feedback on the exposed items and they may not leave feedback on other items since they have not been exposed to them by the deployed system. As a result, the collected feedback dataset that is used to evaluate a new model is influenced by the deployed system, as a form of closed loop feedback. In this paper, we show that the typical offline evaluation of recommender systems suffers from the so-called Simpson's paradox. Simpson's paradox is the name given to a phenomenon observed when a significant trend appears in several different sub-populations of observational data but disappears or is even reversed when these sub-populations are combined together. Our in-depth experiments based on stratified sampling reveal that a very small minority of items that are frequently exposed by the deployed system plays a confounding factor in the offline evaluation of recommendation systems. In addition, we propose a novel evaluation methodology that takes into account the confounder, i.e the deployed system's characteristics. Using the relative comparison of many recommendation models as in the typical offline evaluation of recommender systems, and based on the Kendall rank correlation coefficient, we show that our proposed evaluation methodology exhibits statistically significant improvements of 14% and 40% on the examined open loop datasets (Yahoo! and Coat), respectively, in reflecting the true ranking of systems with an open loop (randomised) evaluation in comparison to the standard evaluation. 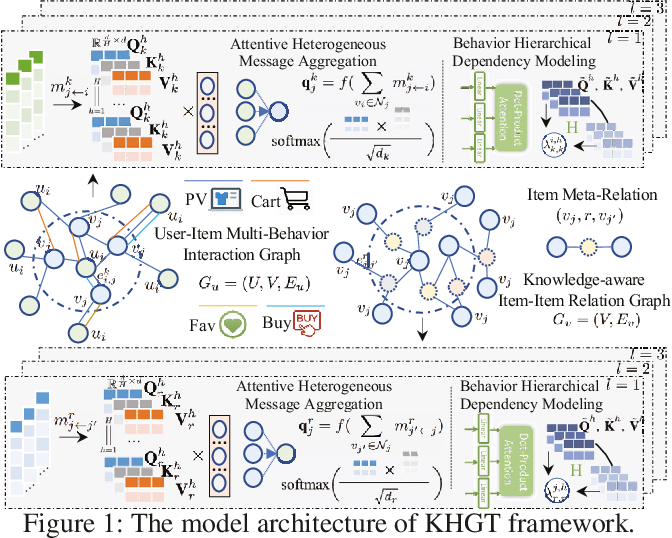 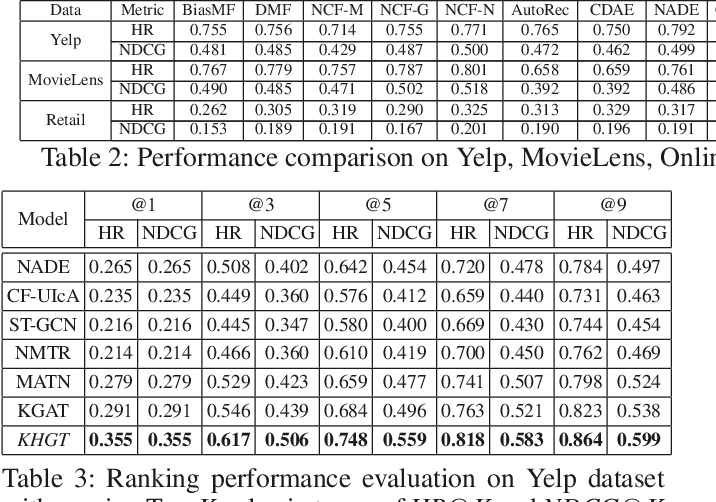 Accurate user and item embedding learning is crucial for modern recommender systems. However, most existing recommendation techniques have thus far focused on modeling users' preferences over singular type of user-item interactions. Many practical recommendation scenarios involve multi-typed user interactive behaviors (e.g., page view, add-to-favorite and purchase), which presents unique challenges that cannot be handled by current recommendation solutions. In particular: i) complex inter-dependencies across different types of user behaviors; ii) the incorporation of knowledge-aware item relations into the multi-behavior recommendation framework; iii) dynamic characteristics of multi-typed user-item interactions. To tackle these challenges, this work proposes a Knowledge-Enhanced Hierarchical Graph Transformer Network (KHGT), to investigate multi-typed interactive patterns between users and items in recommender systems. Specifically, KHGT is built upon a graph-structured neural architecture to i) capture type-specific behavior characteristics; ii) explicitly discriminate which types of user-item interactions are more important in assisting the forecasting task on the target behavior. Additionally, we further integrate the graph attention layer with the temporal encoding strategy, to empower the learned embeddings be reflective of both dedicated multiplex user-item and item-item relations, as well as the underlying interaction dynamics. Extensive experiments conducted on three real-world datasets show that KHGT consistently outperforms many state-of-the-art recommendation methods across various evaluation settings. Our implementation code is available at https://github.com/akaxlh/KHGT. 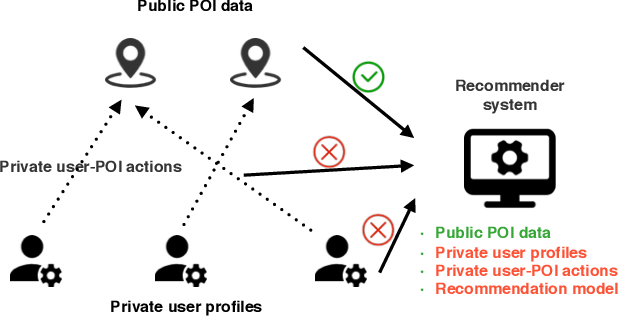 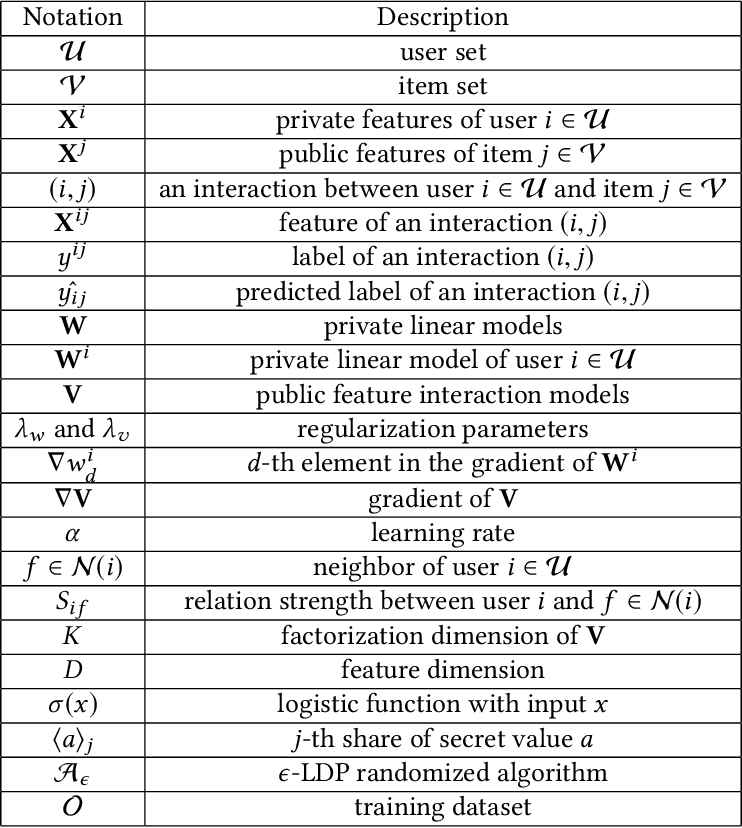 Point-of-Interest (POI) recommendation has been extensively studied and successfully applied in industry recently. However, most existing approaches build centralized models on the basis of collecting users' data. Both private data and models are held by the recommender, which causes serious privacy concerns. In this paper, we propose a novel Privacy preserving POI Recommendation (PriRec) framework. First, to protect data privacy, users' private data (features and actions) are kept on their own side, e.g., Cellphone or Pad. Meanwhile, the public data need to be accessed by all the users are kept by the recommender to reduce the storage costs of users' devices. Those public data include: (1) static data only related to the status of POI, such as POI categories, and (2) dynamic data depend on user-POI actions such as visited counts. The dynamic data could be sensitive, and we develop local differential privacy techniques to release such data to public with privacy guarantees. Second, PriRec follows the representations of Factorization Machine (FM) that consists of linear model and the feature interaction model. To protect the model privacy, the linear models are saved on users' side, and we propose a secure decentralized gradient descent protocol for users to learn it collaboratively. The feature interaction model is kept by the recommender since there is no privacy risk, and we adopt secure aggregation strategy in federated learning paradigm to learn it. To this end, PriRec keeps users' private raw data and models in users' own hands, and protects user privacy to a large extent. We apply PriRec in real-world datasets, and comprehensive experiments demonstrate that, compared with FM, PriRec achieves comparable or even better recommendation accuracy.

EILEEN: A recommendation system for scientific publications and grants 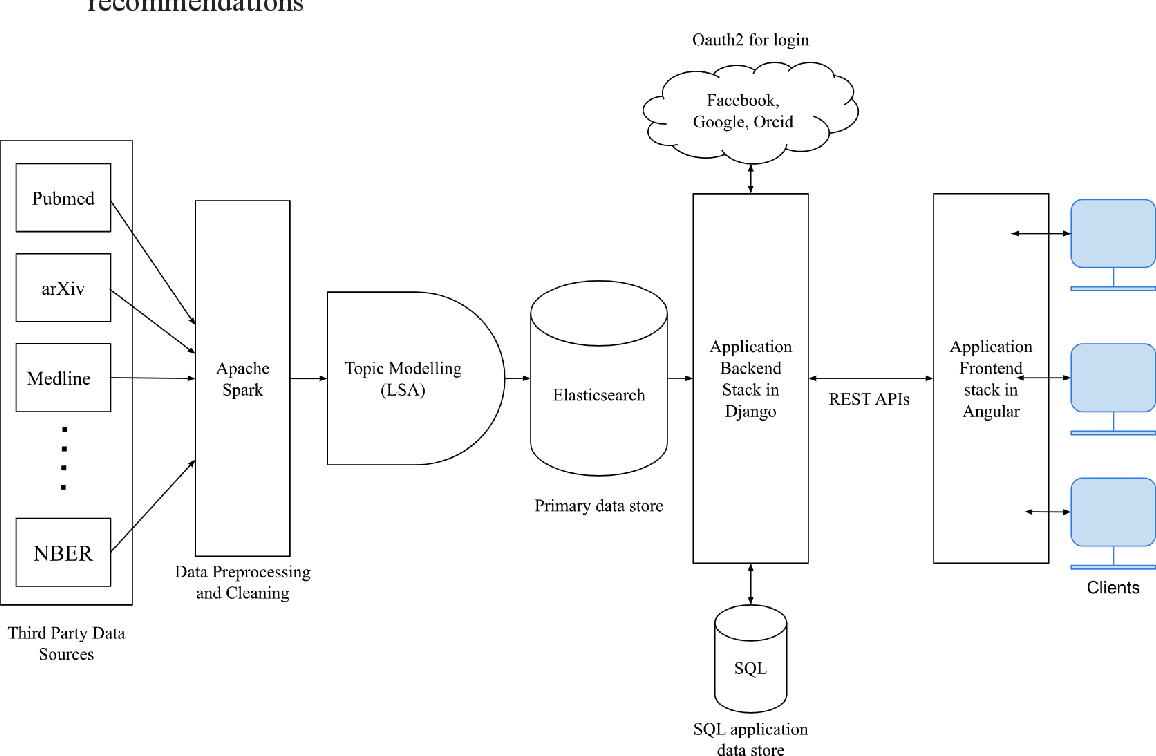 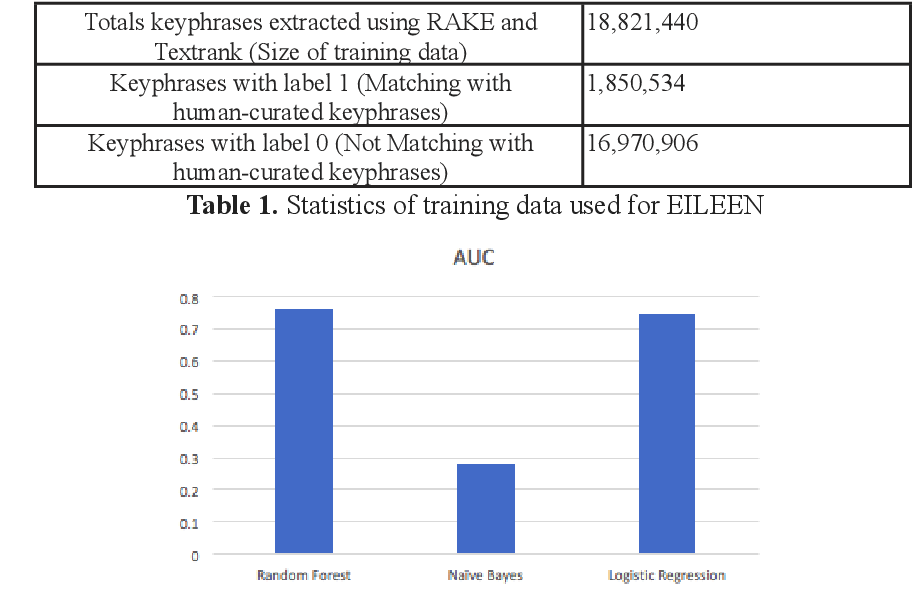 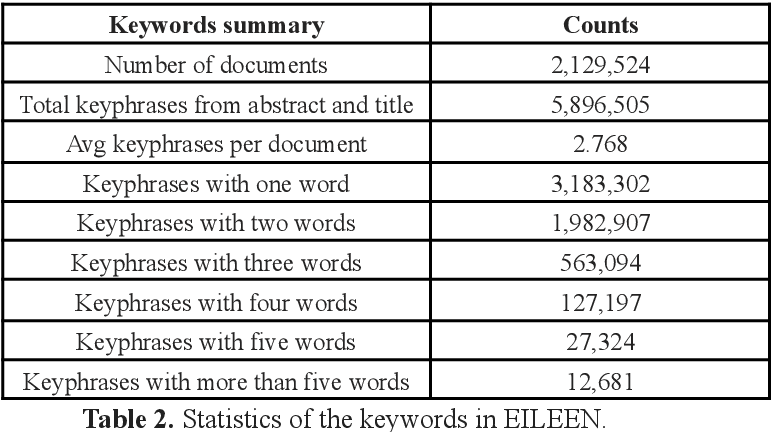 Finding relevant scientific articles is crucial for advancing knowledge. Recommendation systems are helpful for such purpose, although they have only been applied to science recently. This article describes EILEEN (Exploratory Innovator of LitEraturE Networks), a recommendation system for scientific publications and grants with open source code and datasets. We describe EILEEN's architecture for ingesting and processing documents and modeling the recommendation system and keyphrase estimator. Using a unique dataset of log-in user behavior, we validate our recommendation system against Latent Semantic Analysis (LSA) and the standard ranking from Elasticsearch (Lucene scoring). We find that a learning-to-rank with Random Forest achieves an AUC of 0.9, significantly outperforming both baselines. Our results suggest that we can substantially improve science recommendations and learn about scientists' behavior through their search behavior. We make our system available through eileen.io

Many neural-based recommender systems were proposed in recent years and part of them used Generative Adversarial Networks (GAN) to model user-item interactions. However, the exploration of Wasserstein GAN with Gradient Penalty (WGAN-GP) on recommendation has received relatively less scrutiny. In this paper, we focus on two questions: 1- Can we successfully apply WGAN-GP on recommendation and does this approach give an advantage compared to the best GAN models? 2- Are GAN-based recommender systems relevant? To answer the first question, we propose a recommender system based on WGAN-GP called CFWGAN-GP which is founded on a previous model (CFGAN). We successfully applied our method on real-world datasets on the top-k recommendation task and the empirical results show that it is competitive with state-of-the-art GAN approaches, but we found no evidence of significant advantage of using WGAN-GP instead of the original GAN, at least from the accuracy point of view. As for the second question, we conduct a simple experiment in which we show that a well-tuned conceptually simpler method outperforms GAN-based models by a considerable margin, questioning the use of such models. 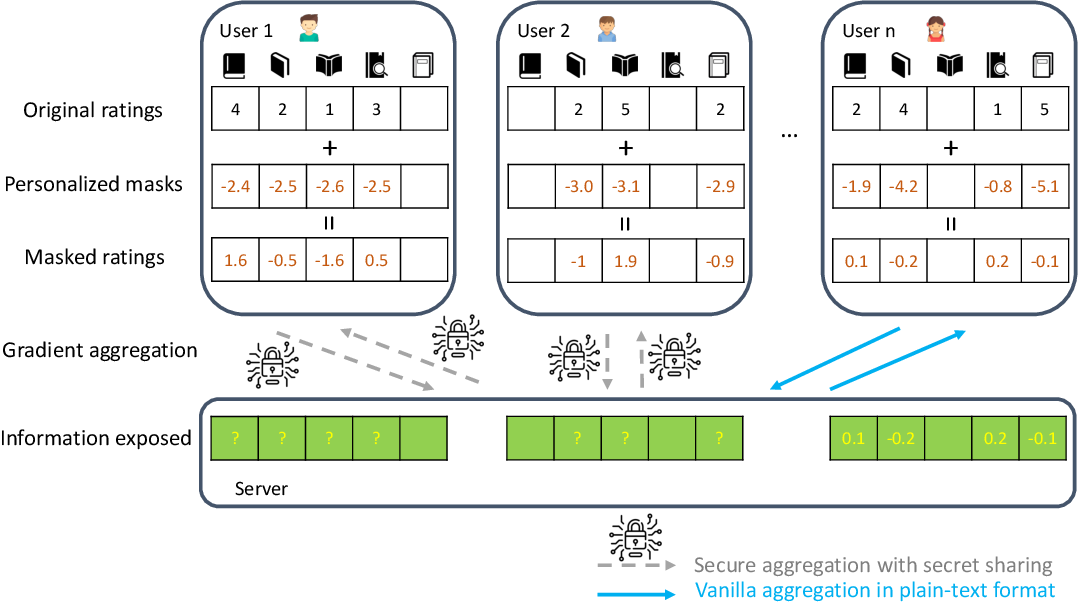 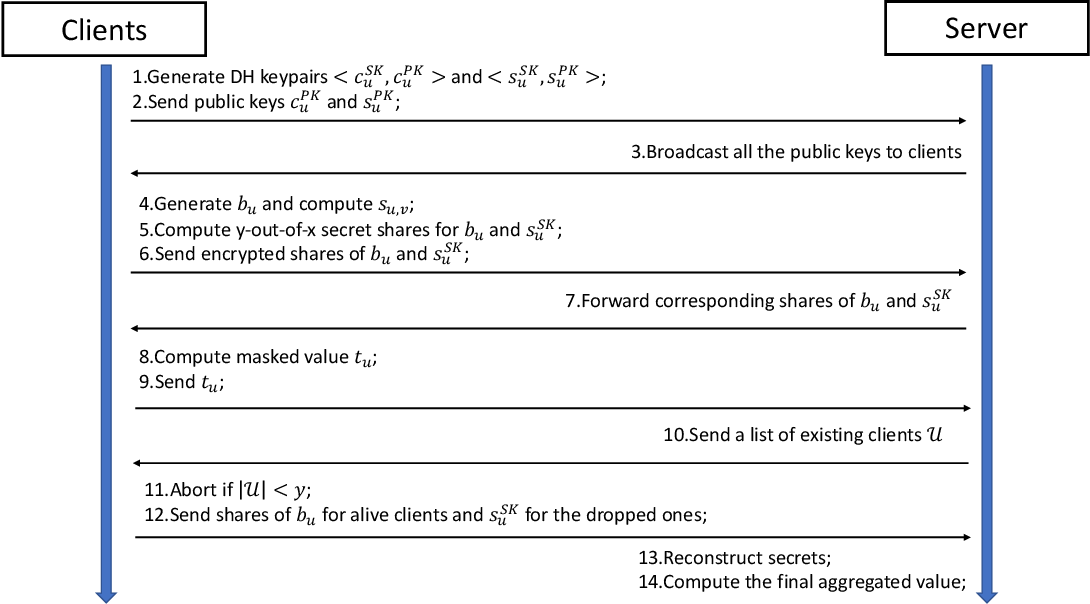 Federated recommendation is a new notion of private distributed recommender systems. It aims to address the data silo and privacy problems altogether. Current federated recommender systems mainly utilize homomorphic encryption and differential privacy methods to protect the intermediate computational results. However, the former comes with extra communication and computation costs, the latter damages model accuracy. Neither of them could simultaneously satisfy the real-time feedback and accurate personalization requirements of recommender systems. In this paper, we proposed a new federated recommendation framework, named federated masked matrix factorization. Federated masked matrix factorization could protect the data privacy in federated recommender systems without sacrificing efficiency or efficacy. Instead of using homomorphic encryption and differential privacy, we utilize the secret sharing technique to incorporate the secure aggregation process of federated matrix factorization. Compared with homomorphic encryption, secret sharing largely speeds up the whole training process. In addition, we introduce a new idea of personalized masks and apply it in the proposed federated masked matrix factorization framework. On the one hand, personalized masks could further improve efficiency. On the other hand, personalized masks also benefit efficacy. Empirically, we show the superiority of the designed model on different real-world data sets. Besides, we also provide the privacy guarantee and discuss the extension of the personalized mask method to the general federated learning tasks. 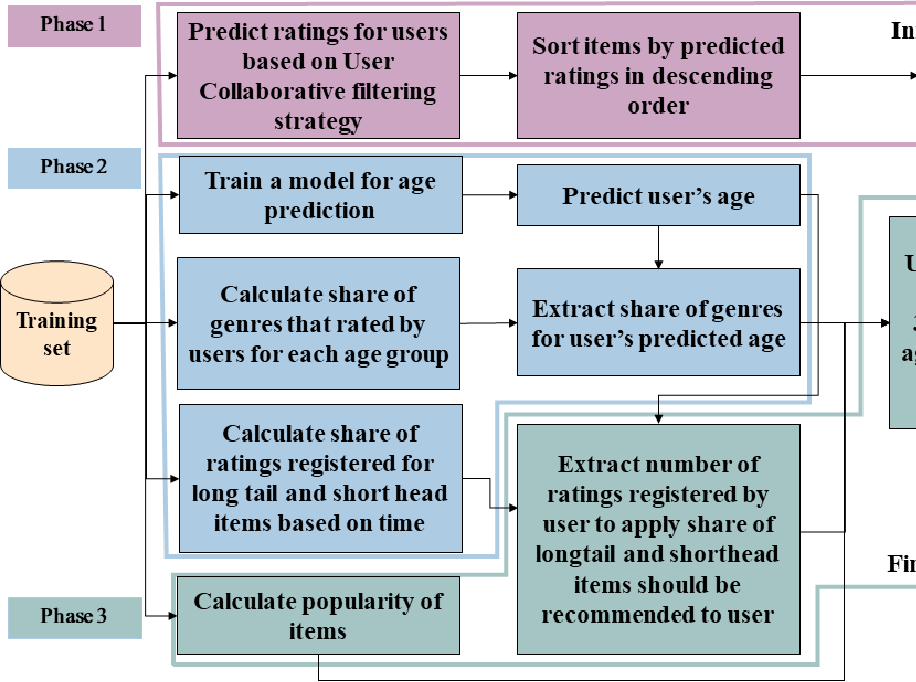 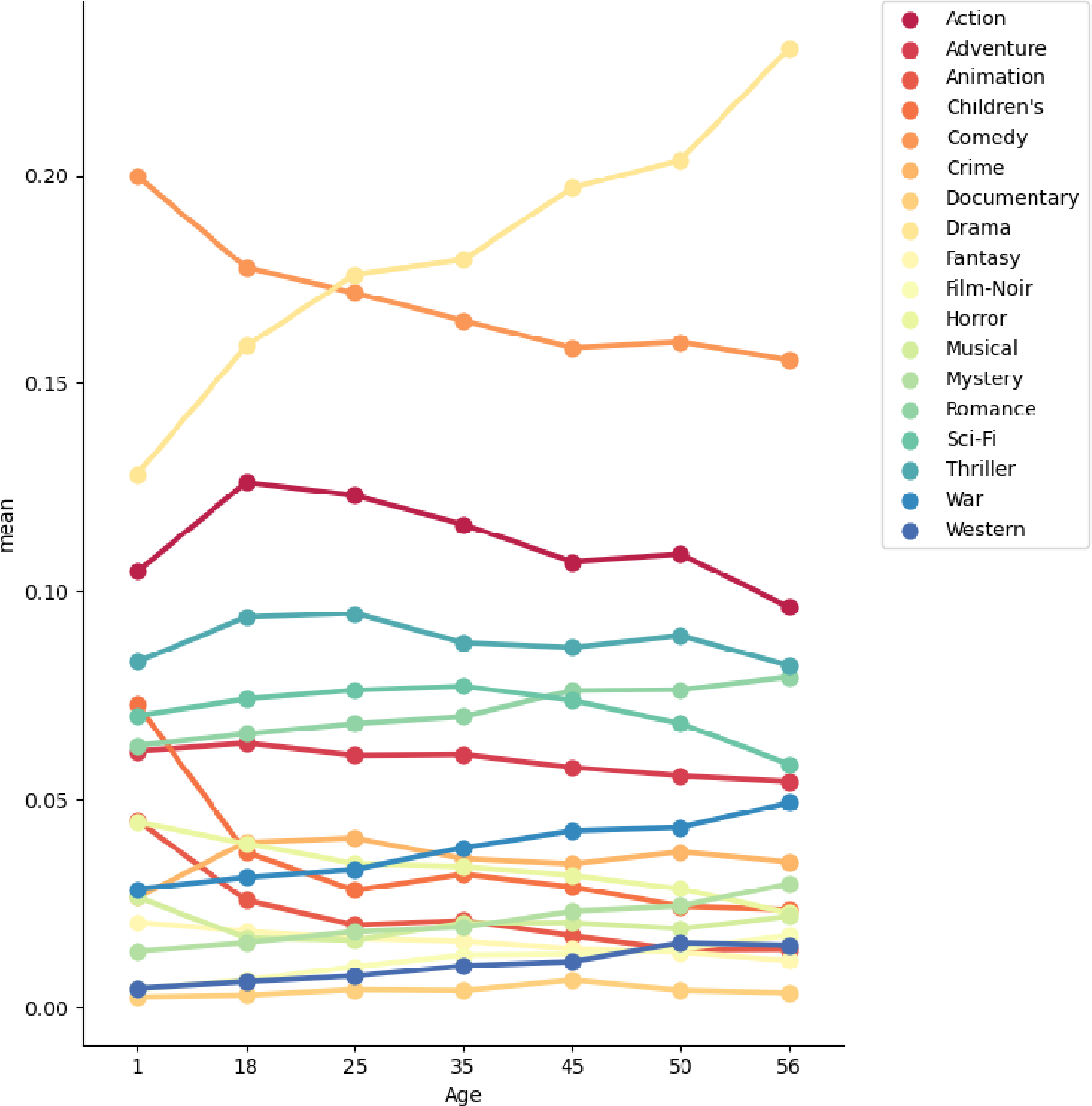 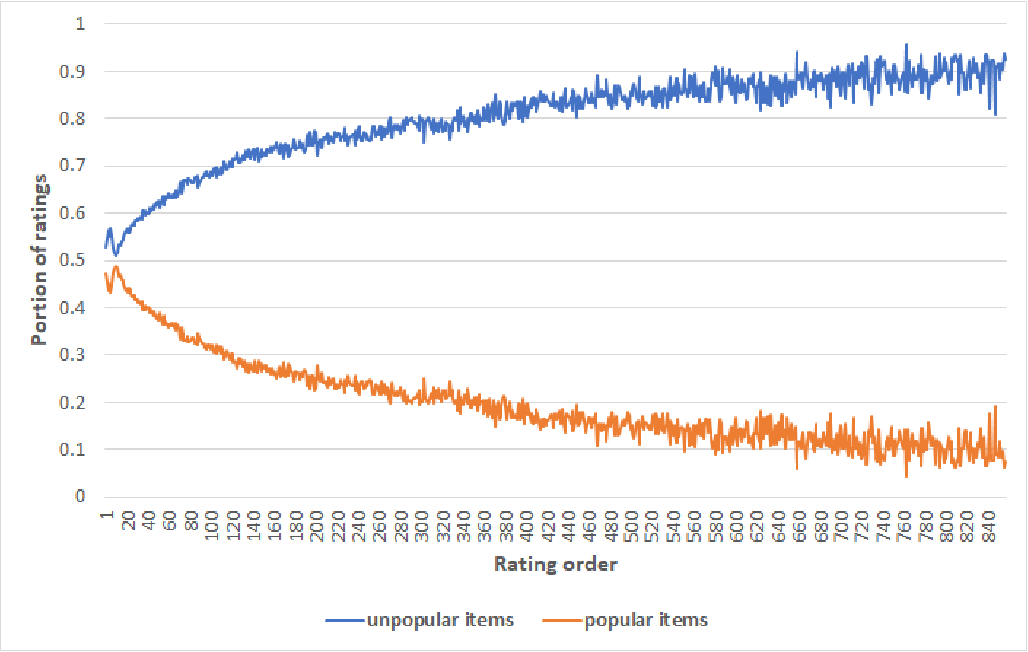 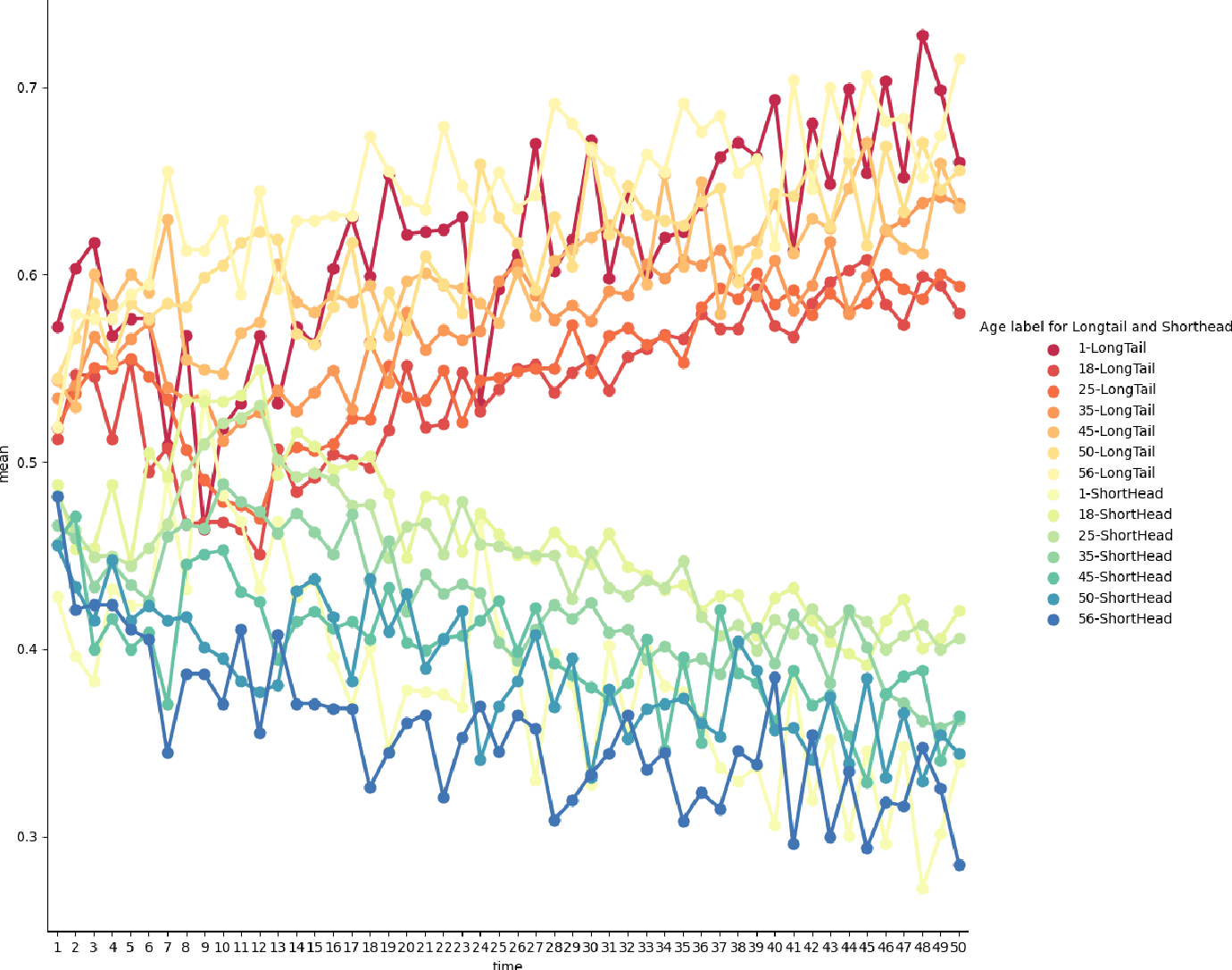 Nowadays, with the increase in the amount of information generated in the webspace, many web service providers try to use recommender systems to personalize their services and make accessing the content convenient. Recommender systems that only try to increase the accuracy (i.e., the similarity of items to users' interest) will face the long tail problem. It means that popular items called short heads appear in the recommendation lists more than others since they have many ratings. However, unpopular items called long-tail items are used less than popular ones as they reduce accuracy. Other studies that solve the long-tail problem consider users' interests constant while their preferences change over time. We suggest that users' dynamic preferences should be taken into account to prevent the loss of accuracy when we use long-tail items in recommendation lists. This study shows that the two reasons lie in the following: 1) Users rate for different proportions of popular and unpopular items over time. 2) Users of all ages have various interests in popular and unpopular items. As a result, recommendation lists can be created over time with a different portion of long-tail and short-head items. Besides, we predict the age of users based on item ratings to use more long-tail items. The results show that by considering these two reasons, the accuracy of recommendation lists reaches 91%. At the same time, the long tail problem is better improved than other related research and provides better diversity in recommendation lists in the long run.