News recommendation calls for deep insights of news articles' underlying semantics. Therefore, pretrained language models (PLMs), like BERT and RoBERTa, may substantially contribute to the recommendation quality. However, it's extremely challenging to have news recommenders trained together with such big models: the learning of news recommenders requires intensive news encoding operations, whose cost is prohibitive if PLMs are used as the news encoder. In this paper, we propose a novel framework, SpeedyFeed, which efficiently trains PLMs-based news recommenders of superior quality. SpeedyFeed is highlighted for its light-weighted encoding pipeline, which gives rise to three major advantages. Firstly, it makes the intermedia results fully reusable for the training workflow, which removes most of the repetitive but redundant encoding operations. Secondly, it improves the data efficiency of the training workflow, where non-informative data can be eliminated from encoding. Thirdly, it further saves the cost by leveraging simplified news encoding and compact news representation. SpeedyFeed leads to more than 100$\times$ acceleration of the training process, which enables big models to be trained efficiently and effectively over massive user data. The well-trained PLMs-based model significantly outperforms the state-of-the-art news recommenders in comprehensive offline experiments. It is applied to Microsoft News to empower the training of large-scale production models, which demonstrate highly competitive online performances. SpeedyFeed is also a model-agnostic framework, thus being potentially applicable to a wide spectrum of content-based recommender systems. We've made the source code open to the public so as to facilitate research and applications in related areas. 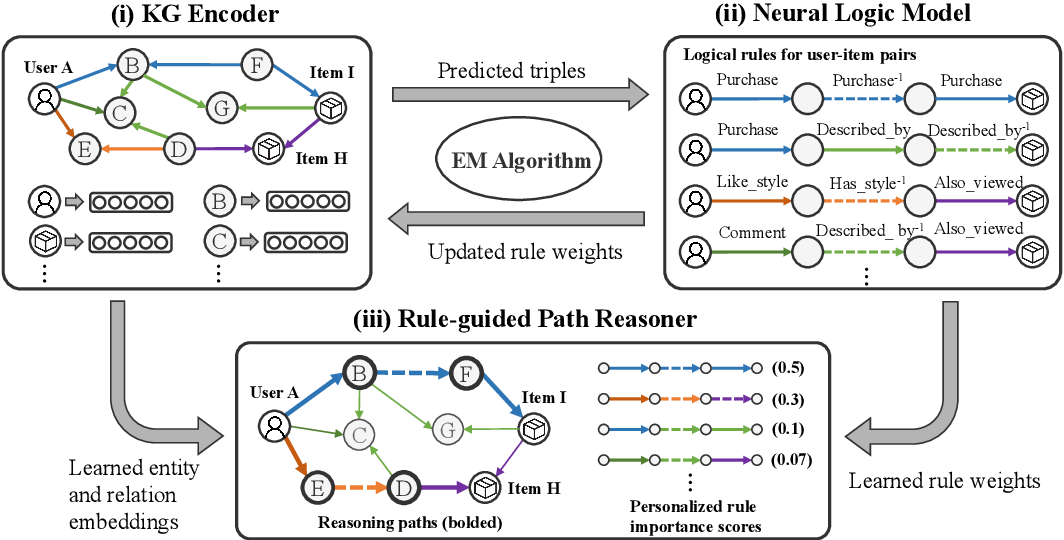 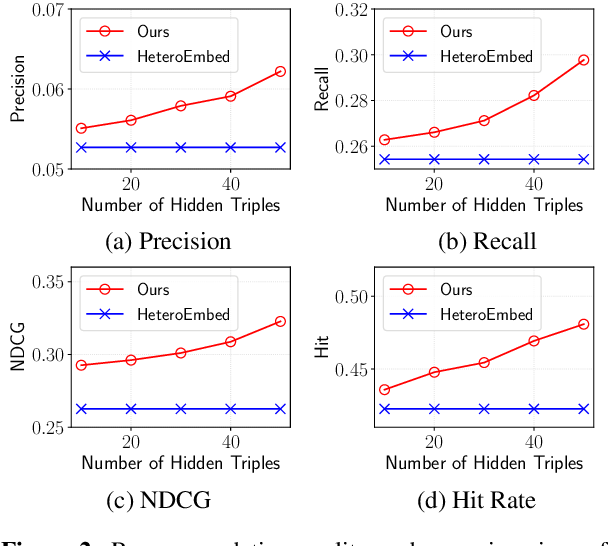 Knowledge graphs (KG) have become increasingly important to endow modern recommender systems with the ability to generate traceable reasoning paths to explain the recommendation process. However, prior research rarely considers the faithfulness of the derived explanations to justify the decision making process. To the best of our knowledge, this is the first work that models and evaluates faithfully explainable recommendation under the framework of KG reasoning. Specifically, we propose neural logic reasoning for explainable recommendation (LOGER) by drawing on interpretable logical rules to guide the path reasoning process for explanation generation. We experiment on three large-scale datasets in the e-commerce domain, demonstrating the effectiveness of our method in delivering high-quality recommendations as well as ascertaining the faithfulness of the derived explanation.

SANST: A Self-Attentive Network for Next Point-of-Interest Recommendation 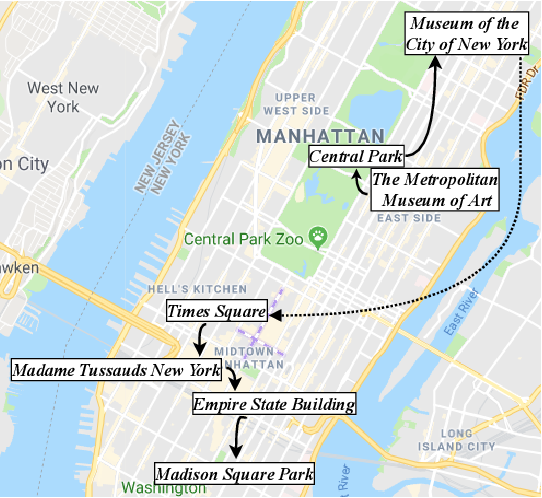 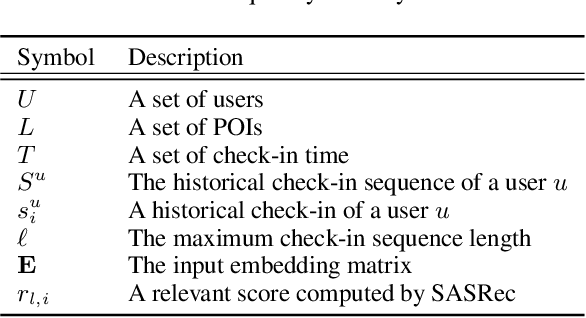 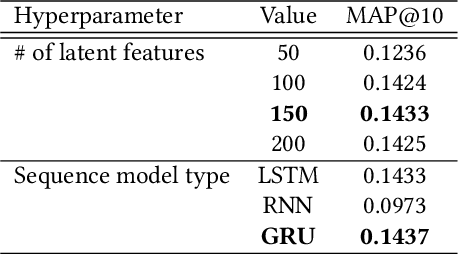 State of the art music recommender systems mainly rely on either Matrix factorization-based collaborative filtering approaches or deep learning architectures. Deep learning models usually use metadata for content-based filtering or predict the next user interaction by learning from temporal sequences of user actions. Despite advances in deep learning for song recommendation, none has taken advantage of the sequential nature of songs by learning sequence models that are based on content. Aside from the importance of prediction accuracy, other significant aspects are important, such as explainability and solving the cold start problem. In this work, we propose a hybrid deep learning structure, called "SeER", that uses collaborative filtering (CF) and deep learning sequence models on the MIDI content of songs for recommendation in order to provide more accurate personalized recommendations; solve the item cold start problem; and generate a relevant explanation for a song recommendation. Our evaluation experiments show promising results compared to state of the art baseline and hybrid song recommender systems in terms of ranking evaluation. 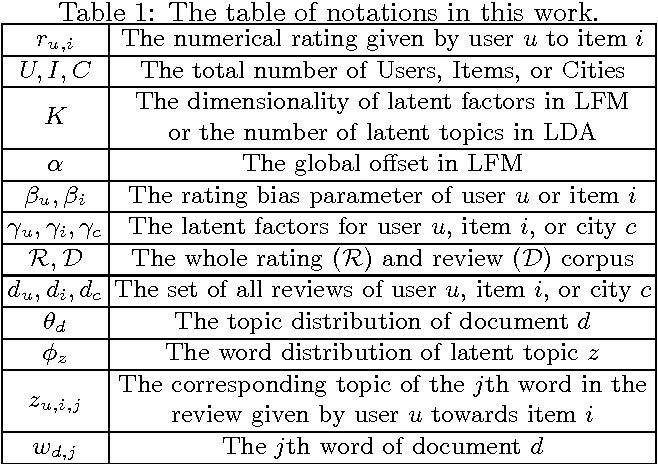 The research of personalized recommendation techniques today has mostly parted into two mainstream directions, i.e., the factorization-based approaches and topic models. Practically, they aim to benefit from the numerical ratings and textual reviews, correspondingly, which compose two major information sources in various real-world systems. However, although the two approaches are supposed to be correlated for their same goal of accurate recommendation, there still lacks a clear theoretical understanding of how their objective functions can be mathematically bridged to leverage the numerical ratings and textual reviews collectively, and why such a bridge is intuitively reasonable to match up their learning procedures for the rating prediction and top-N recommendation tasks, respectively. In this work, we exposit with mathematical analysis that, the vector-level randomization functions to coordinate the optimization objectives of factorizational and topic models unfortunately do not exist at all, although they are usually pre-assumed and intuitively designed in the literature. Fortunately, we also point out that one can avoid the seeking of such a randomization function by optimizing a Joint Factorizational Topic (JFT) model directly. We apply our JFT model to restaurant recommendation, and study its performance in both normal and cross-city recommendation scenarios, where the latter is an extremely difficult task for its inherent cold-start nature. Experimental results on real-world datasets verified the appealing performance of our approach against previous methods, on both rating prediction and top-N recommendation tasks. 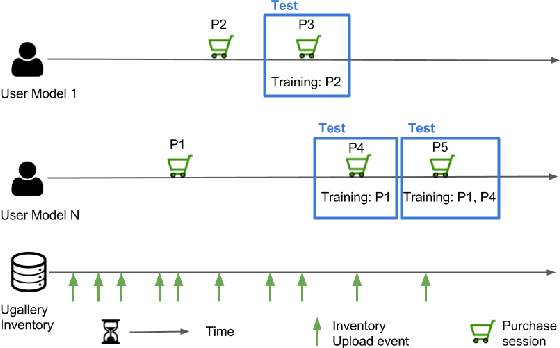 Advances in image processing and computer vision in the latest years have brought about the use of visual features in artwork recommendation. Recent works have shown that visual features obtained from pre-trained deep neural networks (DNNs) perform very well for recommending digital art. Other recent works have shown that explicit visual features (EVF) based on attractiveness can perform well in preference prediction tasks, but no previous work has compared DNN features versus specific attractiveness-based visual features (e.g. brightness, texture) in terms of recommendation performance. In this work, we study and compare the performance of DNN and EVF features for the purpose of physical artwork recommendation using transactional data from UGallery, an online store of physical paintings. In addition, we perform an exploratory analysis to understand if DNN embedded features have some relation with certain EVF. Our results show that DNN features outperform EVF, that certain EVF features are more suited for physical artwork recommendation and, finally, we show evidence that certain neurons in the DNN might be partially encoding visual features such as brightness, providing an opportunity for explaining recommendations based on visual neural models. 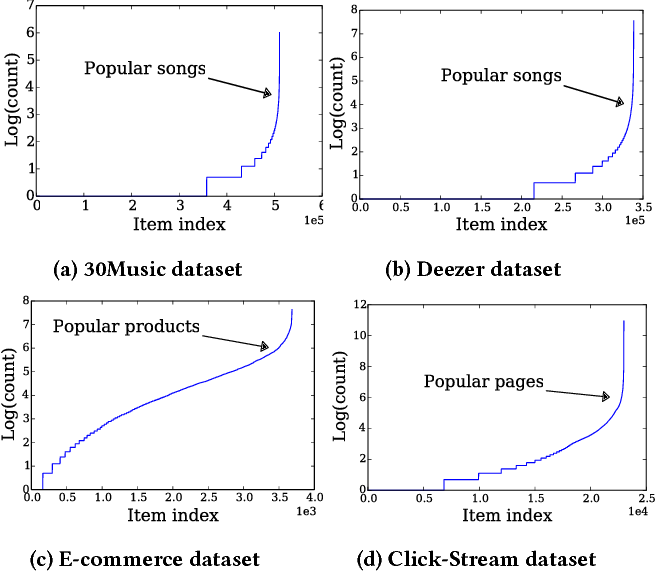 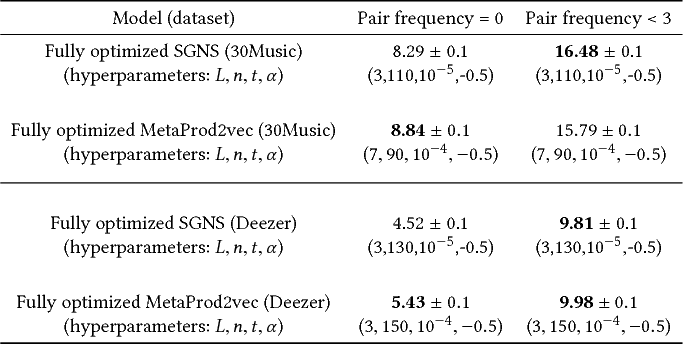 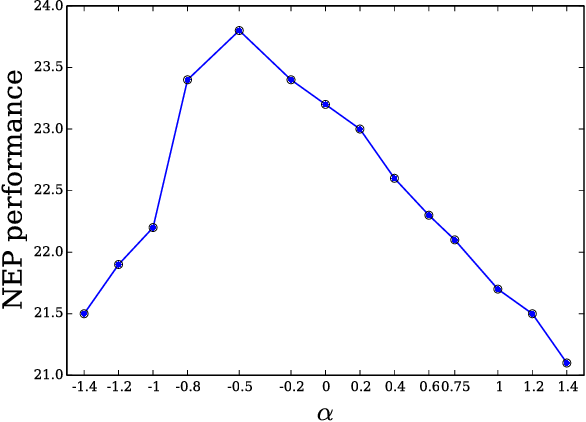 
* This paper is published on the 12th ACM Conference on Recommender Systems, Vancouver, Canada, 2nd-7th October 2018 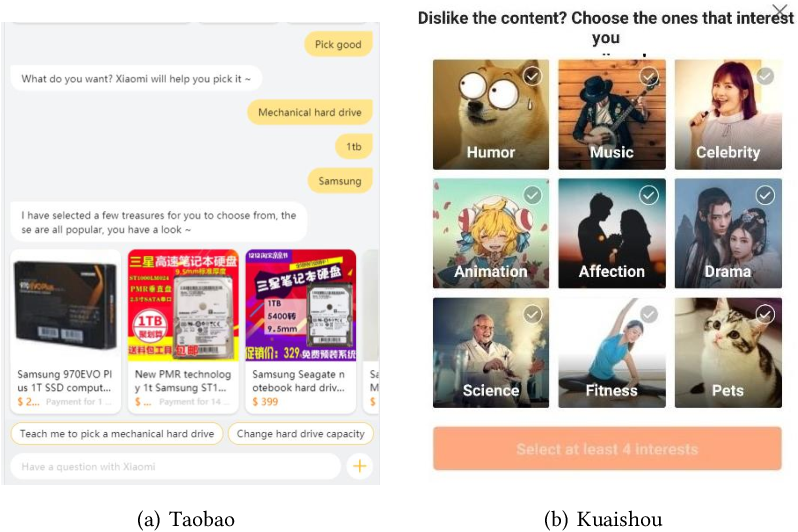 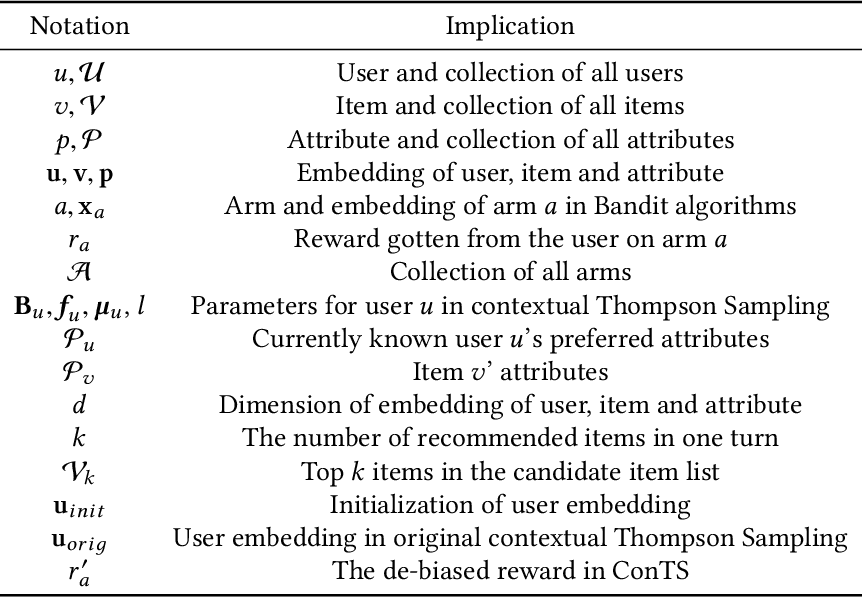 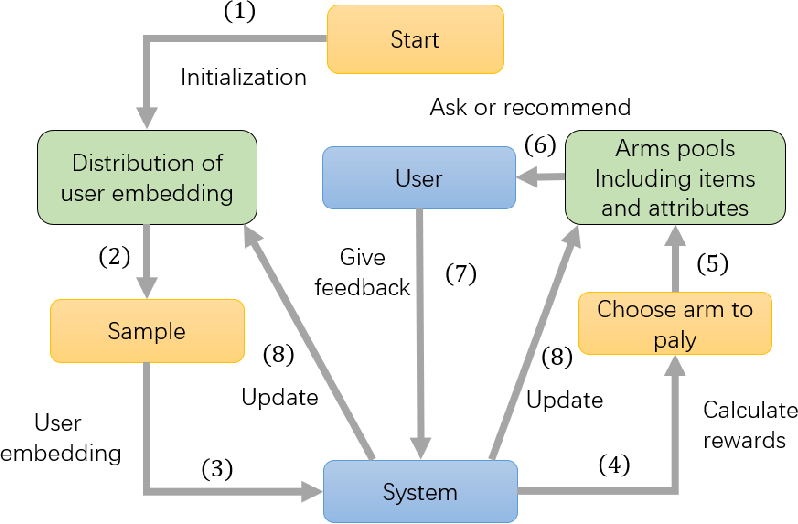 Static recommendation methods like collaborative filtering suffer from the inherent limitation of performing real-time personalization for cold-start users. Online recommendation, e.g., multi-armed bandit approach, addresses this limitation by interactively exploring user preference online and pursuing the exploration-exploitation (EE) trade-off. However, existing bandit-based methods model recommendation actions homogeneously. Specifically, they only consider the items as the arms, being incapable of handling the item attributes, which naturally provide interpretable information of user's current demands and can effectively filter out undesired items. In this work, we consider the conversational recommendation for cold-start users, where a system can both ask the attributes from and recommend items to a user interactively. This important scenario was studied in a recent work. However, it employs a hand-crafted function to decide when to ask attributes or make recommendations. Such separate modeling of attributes and items makes the effectiveness of the system highly rely on the choice of the hand-crafted function, thus introducing fragility to the system. To address this limitation, we seamlessly unify attributes and items in the same arm space and achieve their EE trade-offs automatically using the framework of Thompson Sampling. Our Conversational Thompson Sampling (ConTS) model holistically solves all questions in conversational recommendation by choosing the arm with the maximal reward to play. Extensive experiments on three benchmark datasets show that ConTS outperforms the state-of-the-art methods Conversational UCB (ConUCB) and Estimation-Action-Reflection model in both metrics of success rate and average number of conversation turns. 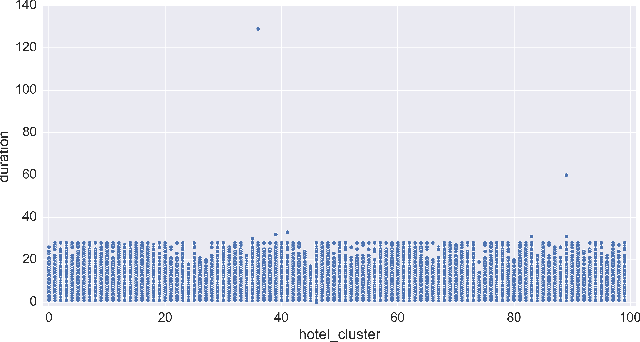 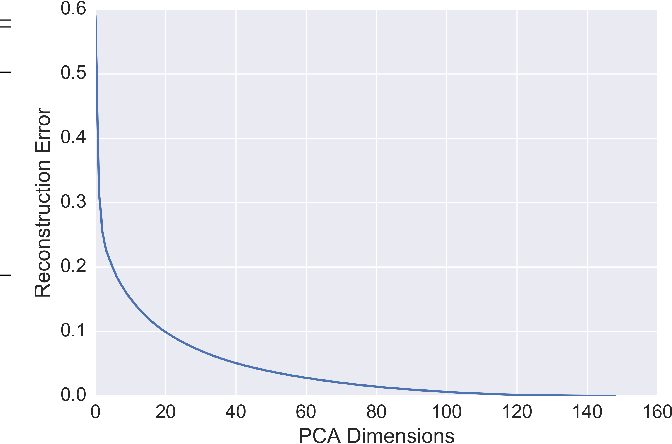 One of the first things to do while planning a trip is to book a good place to stay. Booking a hotel online can be an overwhelming task with thousands of hotels to choose from, for every destination. Motivated by the importance of these situations, we decided to work on the task of recommending hotels to users. We used Expedia's hotel recommendation dataset, which has a variety of features that helped us achieve a deep understanding of the process that makes a user choose certain hotels over others. The aim of this hotel recommendation task is to predict and recommend five hotel clusters to a user that he/she is more likely to book given hundred distinct clusters. 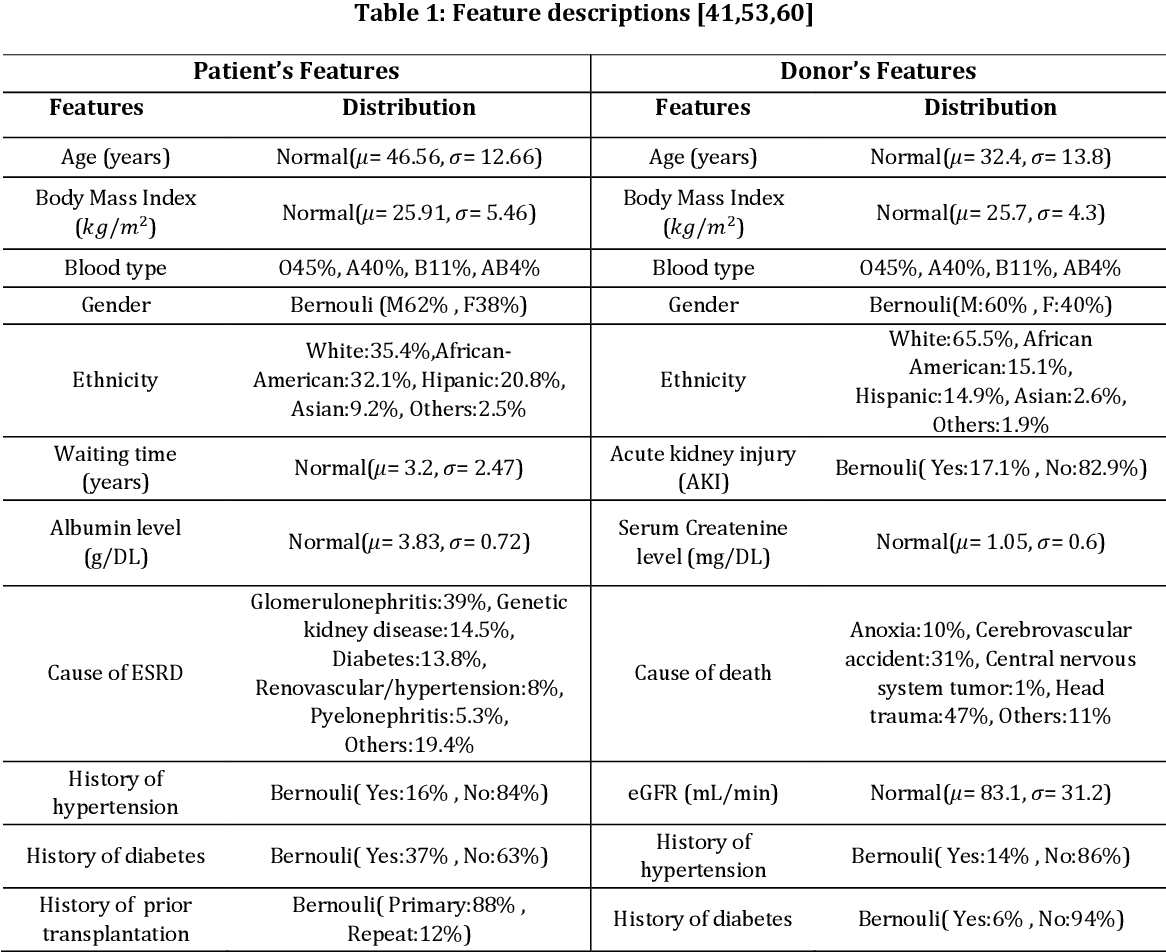 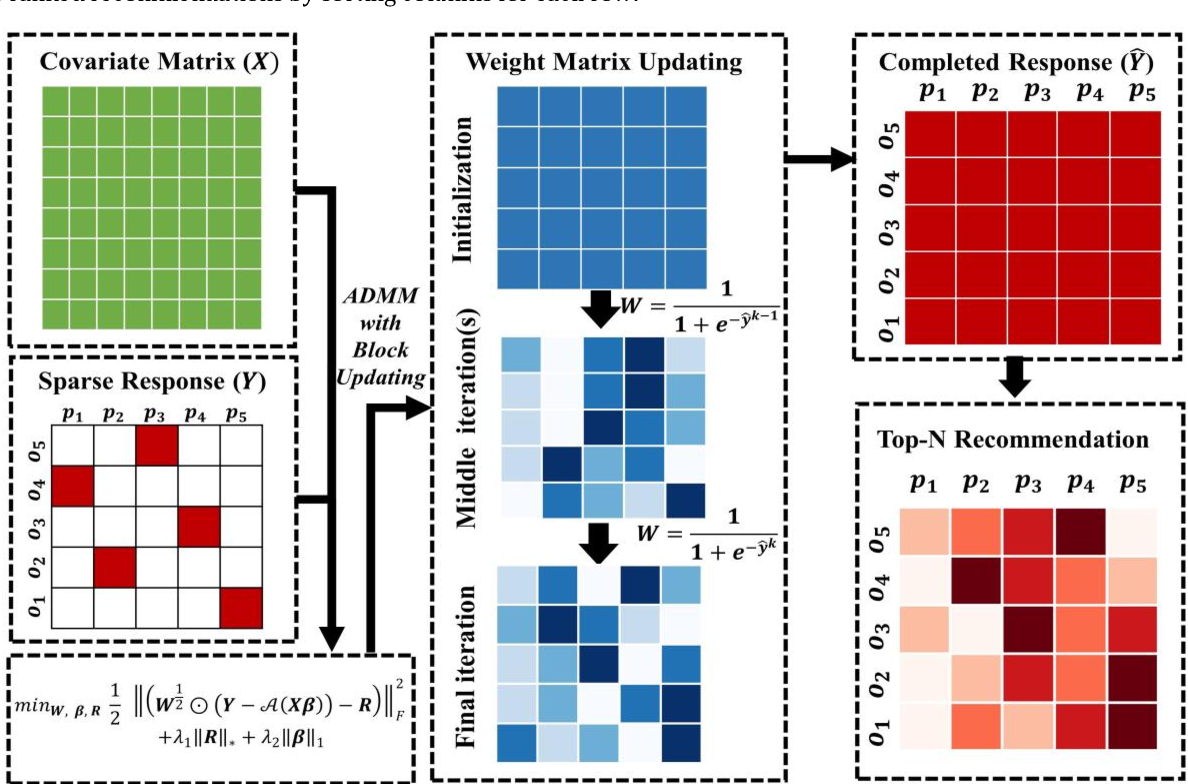 Reducing the shortage of organ donations to meet the demands of patients on the waiting list has being a major challenge in organ transplantation. Because of the shortage, organ matching decision is the most critical decision to assign the limited viable organs to the most suitable patients. Currently, organ matching decisions were only made by matching scores calculated via scoring models, which are built by the first principles. However, these models may disagree with the actual post-transplantation matching performance (e.g., patient's post-transplant quality of life (QoL) or graft failure measurements). In this paper, we formulate the organ matching decision-making as a top-N recommendation problem and propose an Adaptively Weighted Top-N Recommendation (AWTR) method. AWTR improves performance of the current scoring models by using limited actual matching performance in historical data set as well as the collected covariates from organ donors and patients. AWTR sacrifices the overall recommendation accuracy by emphasizing the recommendation and ranking accuracy for top-N matched patients. The proposed method is validated in a simulation study, where KAS [60] is used to simulate the organ-patient recommendation response. The results show that our proposed method outperforms seven state-of-the-art top-N recommendation benchmark methods.