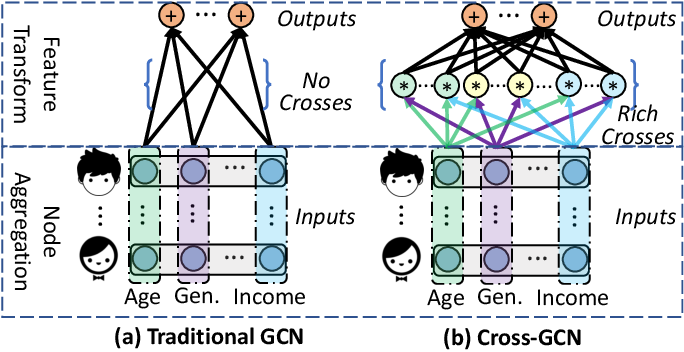 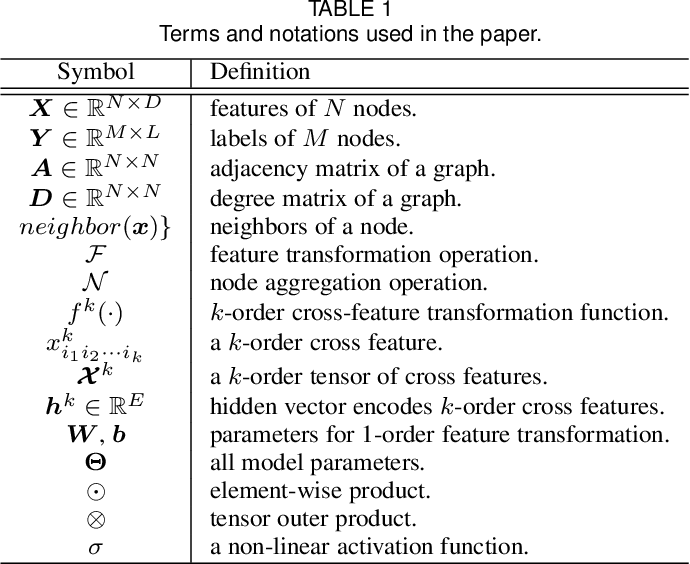 Graph Convolutional Network (GCN) is an emerging technique that performs learning and reasoning on graph data. It operates feature learning on the graph structure, through aggregating the features of the neighbor nodes to obtain the embedding of each target node. Owing to the strong representation power, recent research shows that GCN achieves state-of-the-art performance on several tasks such as recommendation and linked document classification. Despite its effectiveness, we argue that existing designs of GCN forgo modeling cross features, making GCN less effective for tasks or data where cross features are important. Although neural network can approximate any continuous function, including the multiplication operator for modeling feature crosses, it can be rather inefficient to do so (i.e., wasting many parameters at the risk of overfitting) if there is no explicit design. To this end, we design a new operator named Cross-feature Graph Convolution, which explicitly models the arbitrary-order cross features with complexity linear to feature dimension and order size. We term our proposed architecture as Cross-GCN, and conduct experiments on three graphs to validate its effectiveness. Extensive analysis validates the utility of explicitly modeling cross features in GCN, especially for feature learning at lower layers. 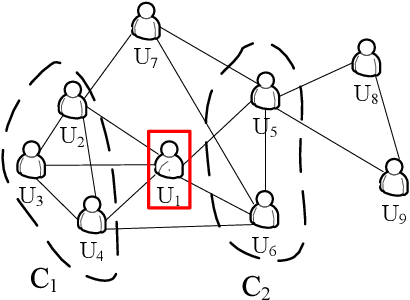 Relationships in online social networks often imply social connections in the real world. An accurate understanding of relationship types benefits many applications, e.g. social advertising and recommendation. Some recent attempts have been proposed to classify user relationships into predefined types with the help of pre-labeled relationships or abundant interaction features on relationships. Unfortunately, both relationship feature data and label data are very sparse in real social platforms like WeChat, rendering existing methods inapplicable. In this paper, we present an in-depth analysis of WeChat relationships to identify the major challenges for the relationship classification task. To tackle the challenges, we propose a Local Community-based Edge Classification (LoCEC) framework that classifies user relationships in a social network into real-world social connection types. LoCEC enforces a three-phase processing, namely local community detection, community classification and relationship classification, to address the sparsity issue of relationship features and relationship labels. Moreover, LoCEC is designed to handle large-scale networks by allowing parallel and distributed processing. We conduct extensive experiments on the real-world WeChat network with hundreds of billions of edges to validate the effectiveness and efficiency of LoCEC. 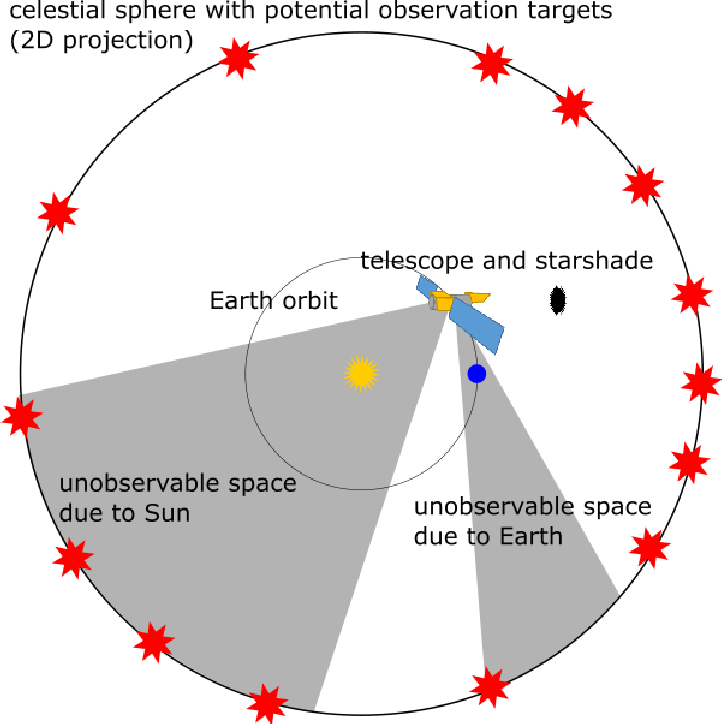 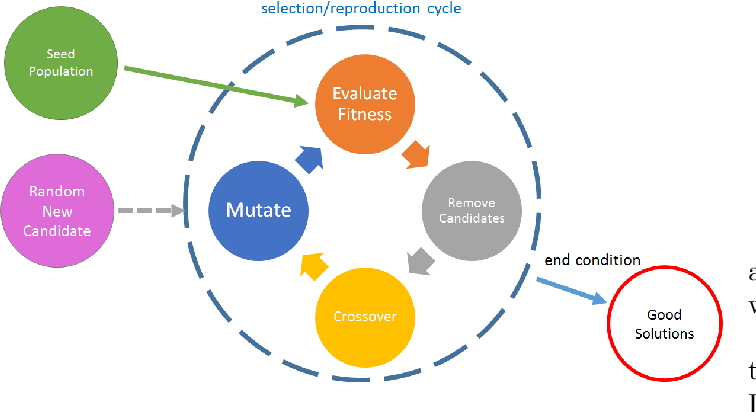 Future space-based telescopes will leverage starshades as components that can be independently positioned. Starshades will adjust the light coming in from exoplanet host stars and enhance the direct imaging of exoplanets and other phenomena. In this context, scheduling of space-based telescope observations is subject to a large number of dynamic constraints, including target observability, fuel, and target priorities. We present an application of genetic algorithm (GA) scheduling on this problem that not only takes physical constraints into account, but also considers direct human suggestions on schedules. By allowing direct suggestions on schedules, this type of heuristic can capture the scheduling preferences and expertise of stakeholders without the need to always formally codify such objectives. Additionally, this approach allows schedules to be constructed from existing ones when scenarios change; for example, this capability allows for optimization without the need to recompute schedules from scratch after changes such as new discoveries or new targets of opportunity. We developed a specific graph-traversal-based framework upon which to apply GA for telescope scheduling, and use it to demonstrate the convergence behavior of a particular implementation of GA. From this work, difficulties with regards to assigning values to observational targets are also noted, and recommendations are made for different scenarios.

Rotting bandits are no harder than stochastic ones

In bandits, arms' distributions are stationary. This is often violated in practice, where rewards change over time. In applications as recommendation systems, online advertising, and crowdsourcing, the changes may be triggered by the pulls, so that the arms' rewards change as a function of the number of pulls. In this paper, we consider the specific case of non-parametric rotting bandits, where the expected reward of an arm may decrease every time it is pulled. We introduce the filtering on expanding window average (FEWA) algorithm that at each round constructs moving averages of increasing windows to identify arms that are more likely to return high rewards when pulled once more. We prove that, without any knowledge on the decreasing behavior of the arms, FEWA achieves similar anytime problem-dependent, $\widetilde{\mathcal{O}}(\log{(KT)}),$ and problem-independent, $\widetilde{\mathcal{O}}(\sqrt{KT})$, regret bounds of near-optimal stochastic algorithms as UCB1 of Auer et al. (2002a). This result substantially improves the prior result of Levine et al. (2017) which needed knowledge of the horizon and decaying parameters to achieve problem-independent bound of only $\widetilde{\mathcal{O}}(K^{1/3}T^{2/3})$. Finally, we report simulations confirming the theoretical improvements of FEWA. 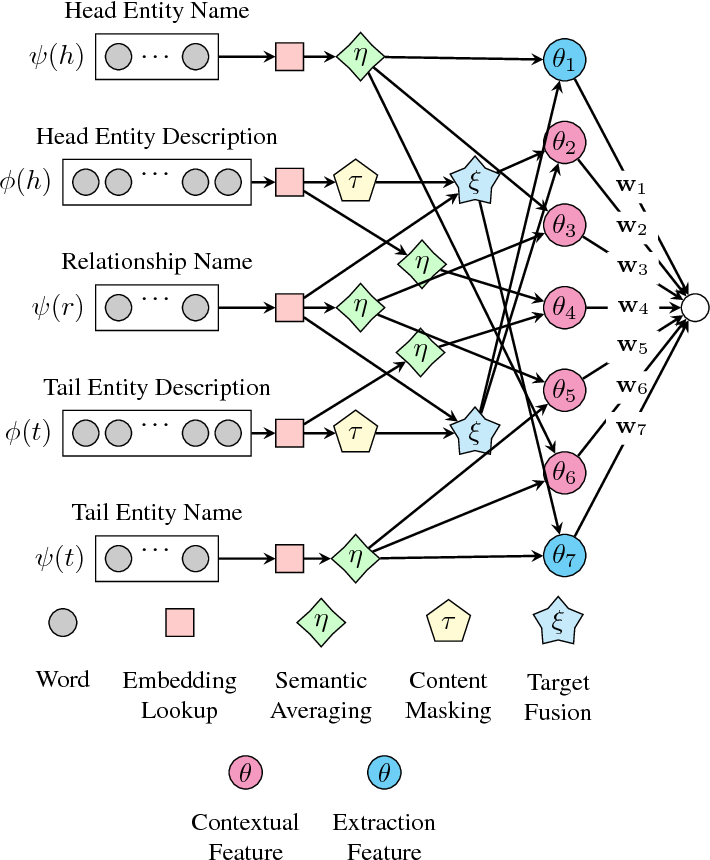 Knowledge Graphs (KGs) have been applied to many tasks including Web search, link prediction, recommendation, natural language processing, and entity linking. However, most KGs are far from complete and are growing at a rapid pace. To address these problems, Knowledge Graph Completion (KGC) has been proposed to improve KGs by filling in its missing connections. Unlike existing methods which hold a closed-world assumption, i.e., where KGs are fixed and new entities cannot be easily added, in the present work we relax this assumption and propose a new open-world KGC task. As a first attempt to solve this task we introduce an open-world KGC model called ConMask. This model learns embeddings of the entity's name and parts of its text-description to connect unseen entities to the KG. To mitigate the presence of noisy text descriptions, ConMask uses a relationship-dependent content masking to extract relevant snippets and then trains a fully convolutional neural network to fuse the extracted snippets with entities in the KG. Experiments on large data sets, both old and new, show that ConMask performs well in the open-world KGC task and even outperforms existing KGC models on the standard closed-world KGC task. 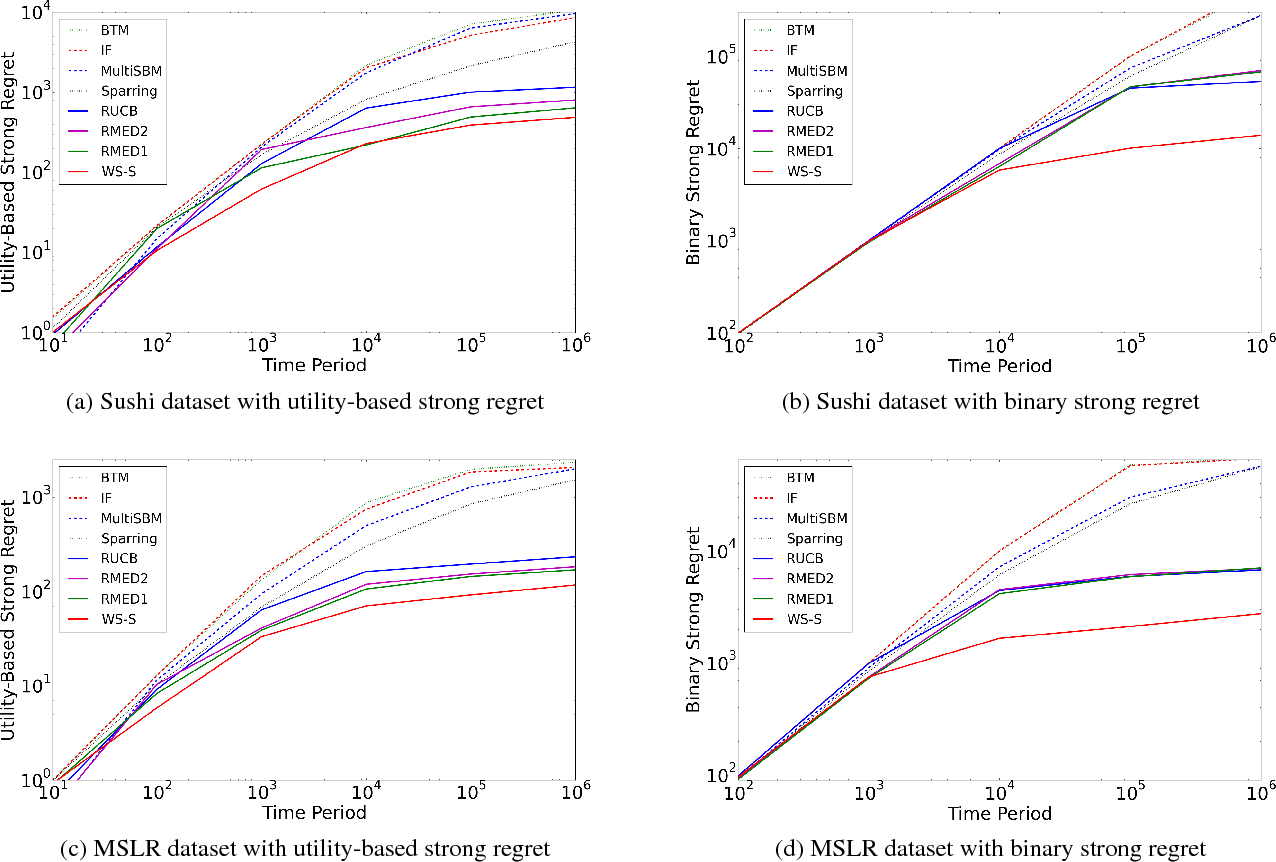 We consider online content recommendation with implicit feedback through pairwise comparisons, formalized as the so-called dueling bandit problem. We study the dueling bandit problem in the Condorcet winner setting, and consider two notions of regret: the more well-studied strong regret, which is 0 only when both arms pulled are the Condorcet winner; and the less well-studied weak regret, which is 0 if either arm pulled is the Condorcet winner. We propose a new algorithm for this problem, Winner Stays (WS), with variations for each kind of regret: WS for weak regret (WS-W) has expected cumulative weak regret that is $O(N^2)$, and $O(N\log(N))$ if arms have a total order; WS for strong regret (WS-S) has expected cumulative strong regret of $O(N^2 + N \log(T))$, and $O(N\log(N)+N\log(T))$ if arms have a total order. WS-W is the first dueling bandit algorithm with weak regret that is constant in time. WS is simple to compute, even for problems with many arms, and we demonstrate through numerical experiments on simulated and real data that WS has significantly smaller regret than existing algorithms in both the weak- and strong-regret settings. 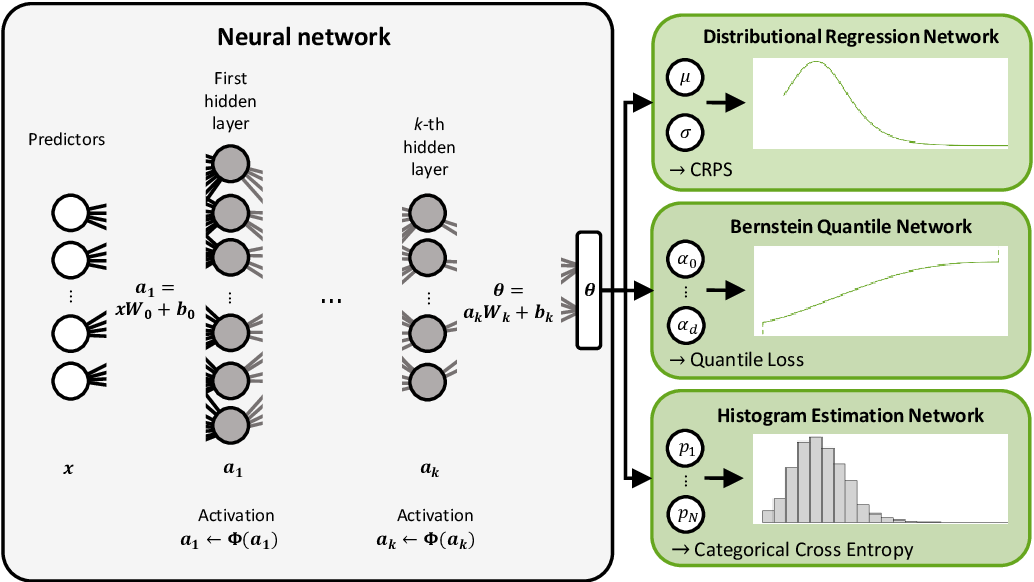 The importance of accurately quantifying forecast uncertainty has motivated much recent research on probabilistic forecasting. In particular, a variety of deep learning approaches has been proposed, with forecast distributions obtained as output of neural networks. These neural network-based methods are often used in the form of an ensemble based on multiple model runs from different random initializations, resulting in a collection of forecast distributions that need to be aggregated into a final probabilistic prediction. With the aim of consolidating findings from the machine learning literature on ensemble methods and the statistical literature on forecast combination, we address the question of how to aggregate distribution forecasts based on such deep ensembles. Using theoretical arguments, simulation experiments and a case study on wind gust forecasting, we systematically compare probability- and quantile-based aggregation methods for three neural network-based approaches with different forecast distribution types as output. Our results show that combining forecast distributions can substantially improve the predictive performance. We propose a general quantile aggregation framework for deep ensembles that shows superior performance compared to a linear combination of the forecast densities. Finally, we investigate the effects of the ensemble size and derive recommendations of aggregating distribution forecasts from deep ensembles in practice.

As the core technique of online recruitment platforms, person-job fit can improve hiring efficiency by accurately matching job positions with qualified candidates. However, existing studies mainly focus on the recommendation scenario, while neglecting another important channel for linking positions with job seekers, i.e. search. Intuitively, search history contains rich user behavior in job seeking, reflecting important evidence for job intention of users. In this paper, we present a novel Search History enhanced Person-Job Fit model, named as SHPJF. To utilize both text content from jobs/resumes and search histories from users, we propose two components with different purposes. For text matching component, we design a BERT-based text encoder for capturing the semantic interaction between resumes and job descriptions. For intention modeling component, we design two kinds of intention modeling approaches based on the Transformer architecture, either based on the click sequence or query text sequence. To capture underlying job intentions, we further propose an intention clustering technique to identify and summarize the major intentions from search logs. Extensive experiments on a large real-world recruitment dataset have demonstrated the effectiveness of our approach.

Graph Neural Networks (GNNs) have drawn significant attentions over the years and been broadly applied to vital fields that require high security standard such as product recommendation and traffic forecasting. Under such scenarios, exploiting GNN's vulnerabilities and further downgrade its classification performance become highly incentive for adversaries. Previous attackers mainly focus on structural perturbations of existing graphs. Although they deliver promising results, the actual implementation needs capability of manipulating the graph connectivity, which is impractical in some circumstances. In this work, we study the possibility of injecting nodes to evade the victim GNN model, and unlike previous related works with white-box setting, we significantly restrict the amount of accessible knowledge and explore the black-box setting. Specifically, we model the node injection attack as a Markov decision process and propose GA2C, a graph reinforcement learning framework in the fashion of advantage actor critic, to generate realistic features for injected nodes and seamlessly merge them into the original graph following the same topology characteristics. Through our extensive experiments on multiple acknowledged benchmark datasets, we demonstrate the superior performance of our proposed GA2C over existing state-of-the-art methods. The data and source code are publicly accessible at: https://github.com/jumxglhf/GA2C. 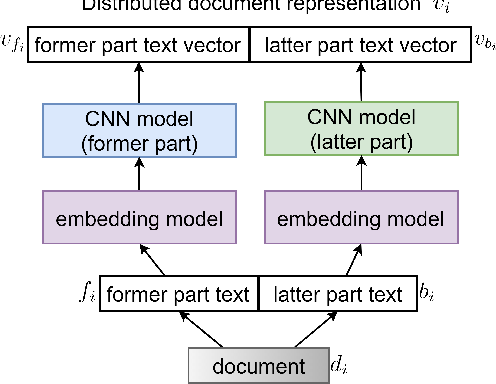 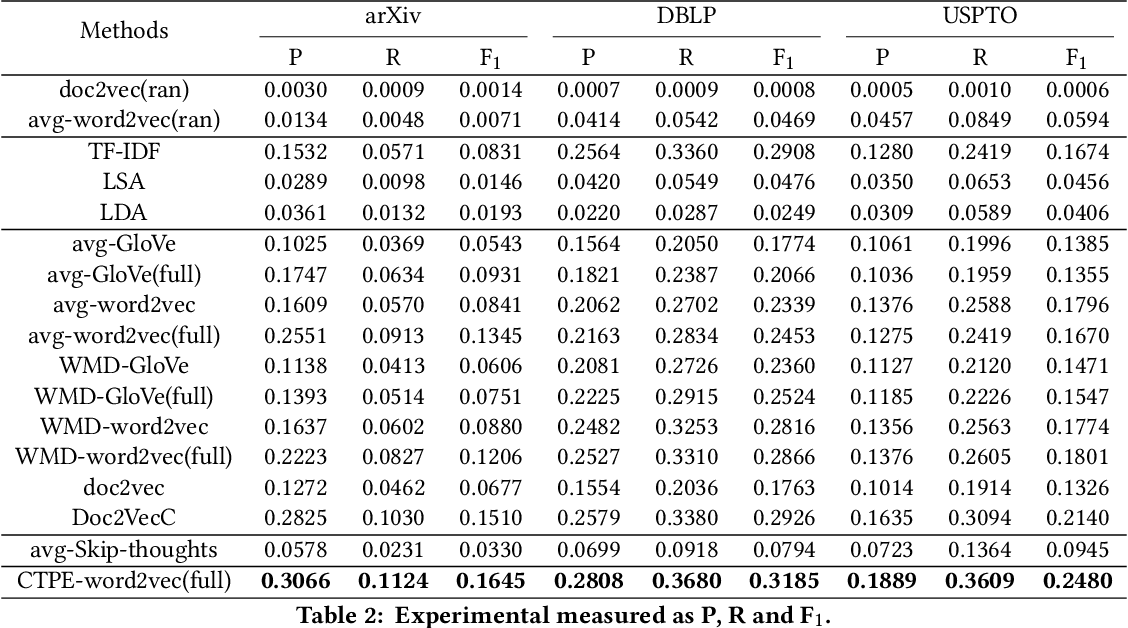 Distributed document representation is one of the basic problems in natural language processing. Currently distributed document representation methods mainly consider the context information of words or sentences. These methods do not take into account the coherence of the document as a whole, e.g., a relation between the paper title and abstract, headline and description, or adjacent bodies in the document. The coherence shows whether a document is meaningful, both logically and syntactically, especially in scientific documents (papers or patents, etc.). In this paper, we propose a coupled text pair embedding (CTPE) model to learn the representation of scientific documents, which maintains the coherence of the document with coupled text pairs formed by segmenting the document. First, we divide the document into two parts (e.g., title and abstract, etc) which construct a coupled text pair. Then, we adopt negative sampling to construct uncoupled text pairs whose two parts are from different documents. Finally, we train the model to judge whether the text pair is coupled or uncoupled and use the obtained embedding of coupled text pairs as the embedding of documents. We perform experiments on three datasets for one information retrieval task and two recommendation tasks. The experimental results verify the effectiveness of the proposed CTPE model.