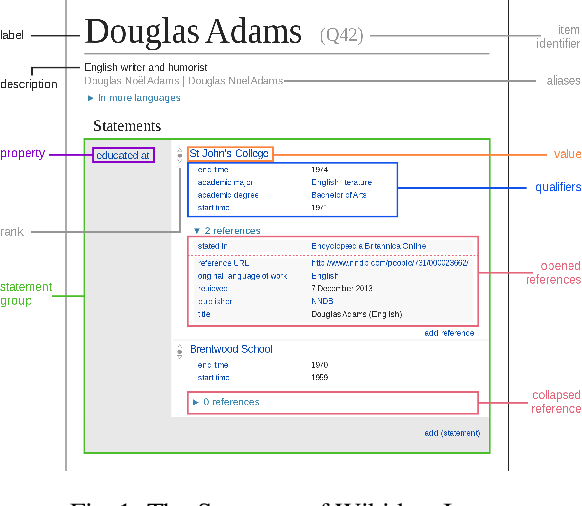 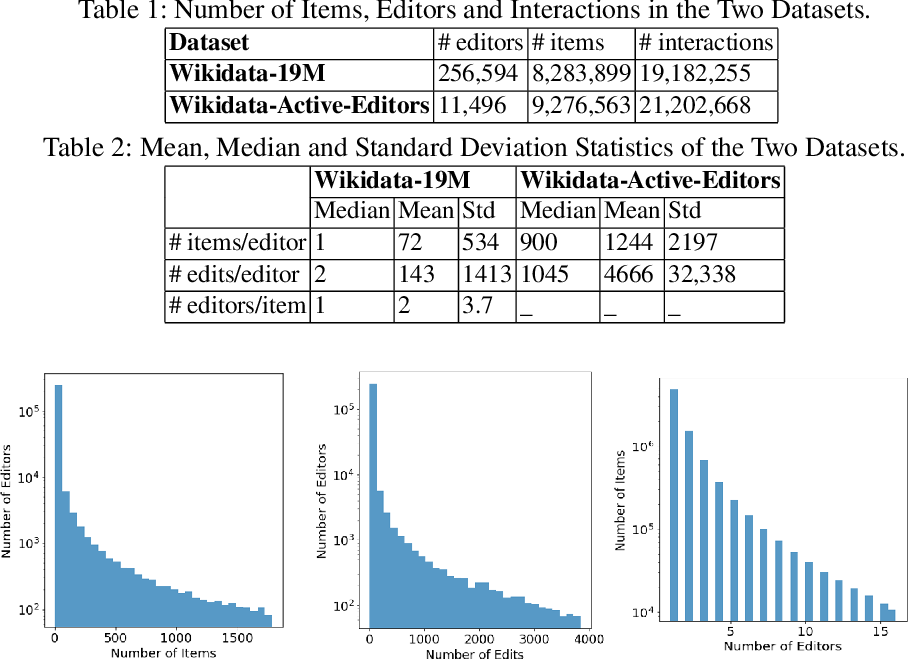 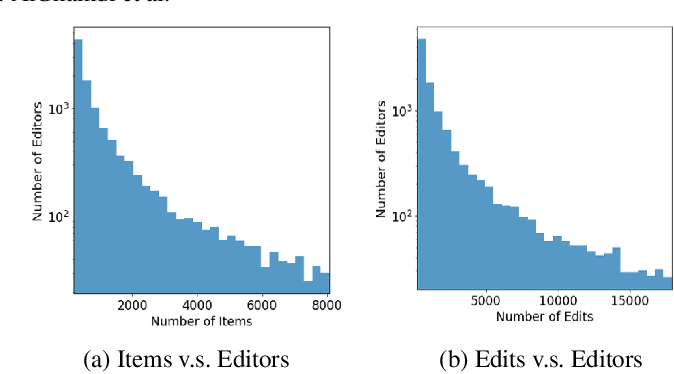 Wikidata is an open knowledge graph built by a global community of volunteers. As it advances in scale, it faces substantial challenges around editor engagement. These challenges are in terms of both attracting new editors to keep up with the sheer amount of work and retaining existing editors. Experience from other online communities and peer-production systems, including Wikipedia, suggests that personalised recommendations could help, especially newcomers, who are sometimes unsure about how to contribute best to an ongoing effort. For this reason, we propose a recommender system WikidataRec for Wikidata items. The system uses a hybrid of content-based and collaborative filtering techniques to rank items for editors relying on both item features and item-editor previous interaction. A neural network, named a neural mixture of representations, is designed to learn fine weights for the combination of item-based representations and optimize them with editor-based representation by item-editor interaction. To facilitate further research in this space, we also create two benchmark datasets, a general-purpose one with 220,000 editors responsible for 14 million interactions with 4 million items and a second one focusing on the contributions of more than 8,000 more active editors. We perform an offline evaluation of the system on both datasets with promising results. Our code and datasets are available at https://github.com/WikidataRec-developer/Wikidata_Recommender. 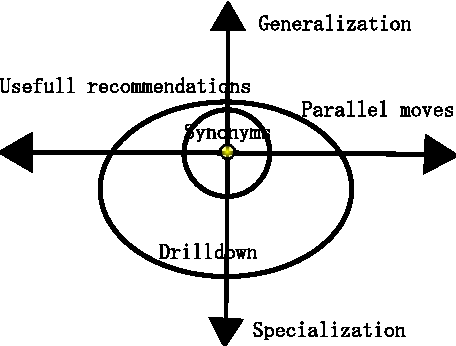 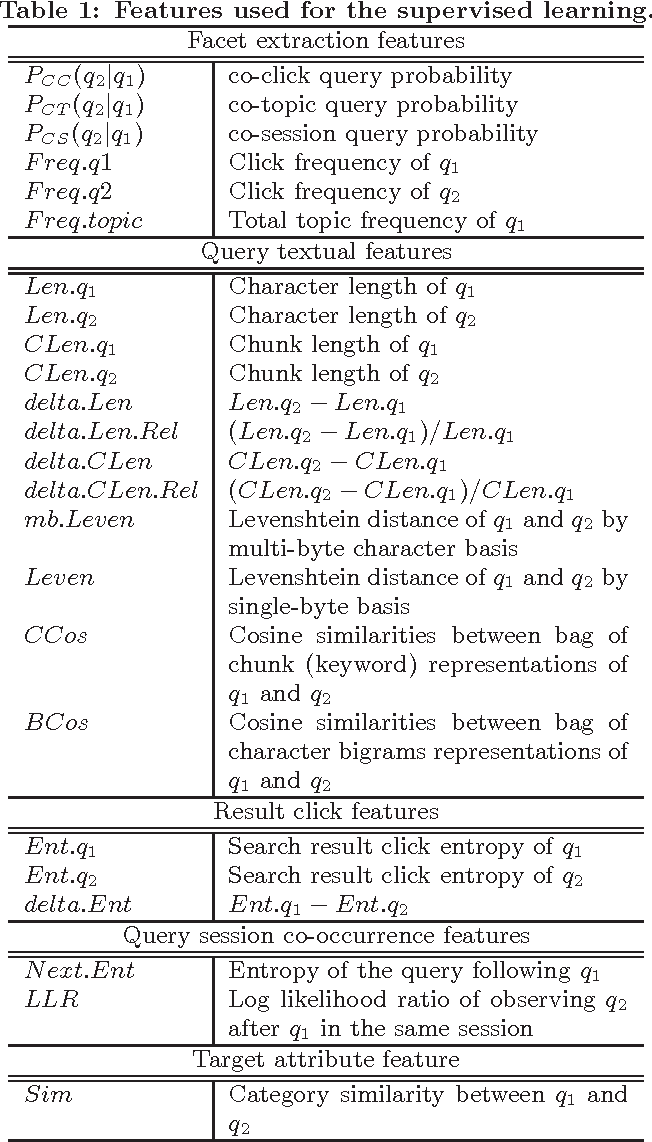 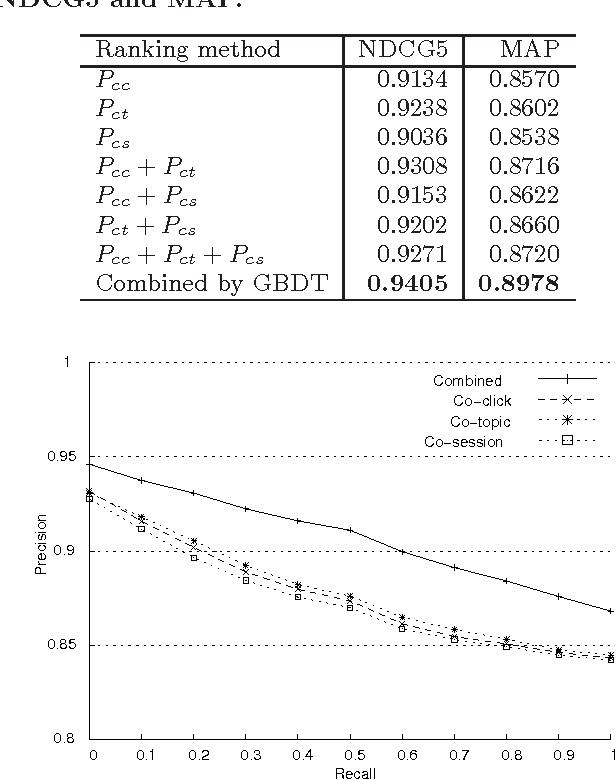 Logs of the interactions with a search engine show that users often reformulate their queries. Examining these reformulations shows that recommendations that precise the focus of a query are helpful, like those based on expansions of the original queries. But it also shows that queries that express some topical shift with respect to the original query can help user access more rapidly the information they need. We propose a method to identify from the query logs of past users queries that either focus or shift the initial query topic. This method combines various click-based, topic-based and session based ranking strategies and uses supervised learning in order to maximize the semantic similarities between the query and the recommendations, while at the same diversifying them. We evaluate our method using the query/click logs of a Japanese web search engine and we show that the combination of the three methods proposed is significantly better than any of them taken individually. 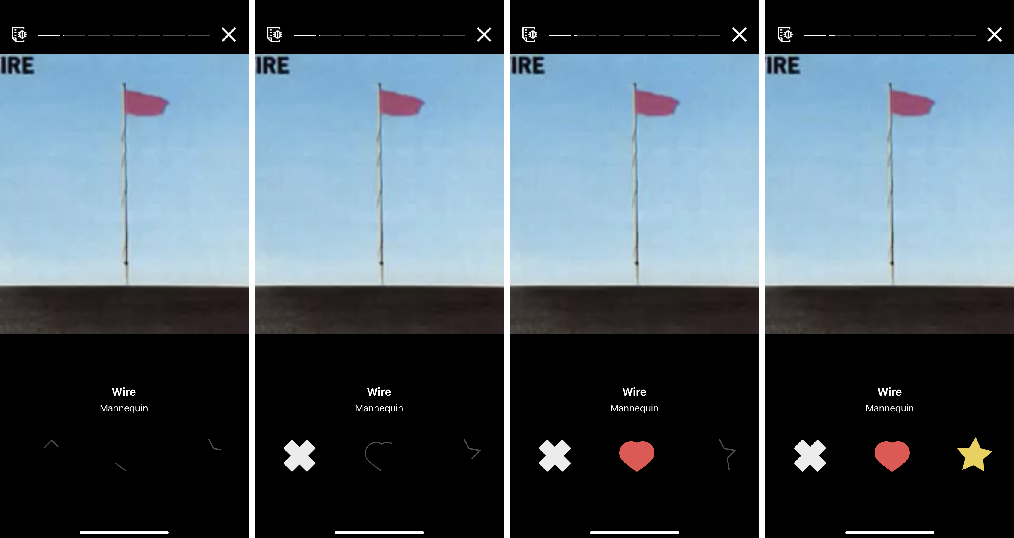 High quality user feedback data is essential to training and evaluating a successful music recommendation system, particularly one that has to balance the needs of multiple stakeholders. Most existing music datasets suffer from noisy feedback and self-selection biases inherent in the data collected by music platforms. Using the Piki Music dataset of 500k ratings collected over a two-year time period, we evaluate the performance of classic recommendation algorithms on three important stakeholders: consumers, well-known artists and lesser-known artists. We show that a matrix factorization algorithm trained on both likes and dislikes performs significantly better compared to one trained only on likes for all three stakeholders.


* Accepted by the MORS workshop at RecSys 2021 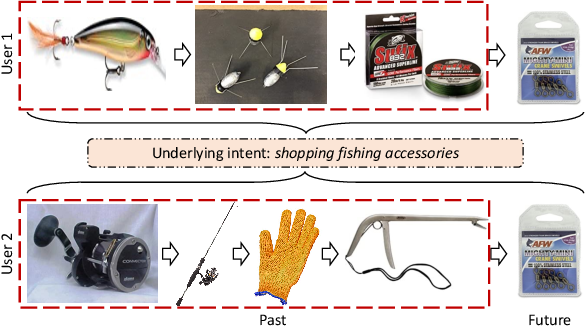 Users' interactions with items are driven by various intents (e.g., preparing for holiday gifts, shopping for fishing equipment, etc.).However, users' underlying intents are often unobserved/latent, making it challenging to leverage such latent intents forSequentialrecommendation(SR). To investigate the benefits of latent intents and leverage them effectively for recommendation, we proposeIntentContrastiveLearning(ICL), a general learning paradigm that leverages a latent intent variable into SR. The core idea is to learn users' intent distribution functions from unlabeled user behavior sequences and optimize SR models with contrastive self-supervised learning (SSL) by considering the learned intents to improve recommendation. Specifically, we introduce a latent variable to represent users' intents and learn the distribution function of the latent variable via clustering. We propose to leverage the learned intents into SR models via contrastive SSL, which maximizes the agreement between a view of sequence and its corresponding intent. The training is alternated between intent representation learning and the SR model optimization steps within the generalized expectation-maximization (EM) framework. Fusing user intent information into SR also improves model robustness. Experiments conducted on four real-world datasets demonstrate the superiority of the proposed learning paradigm, which improves performance, and robustness against data sparsity and noisy interaction issues. 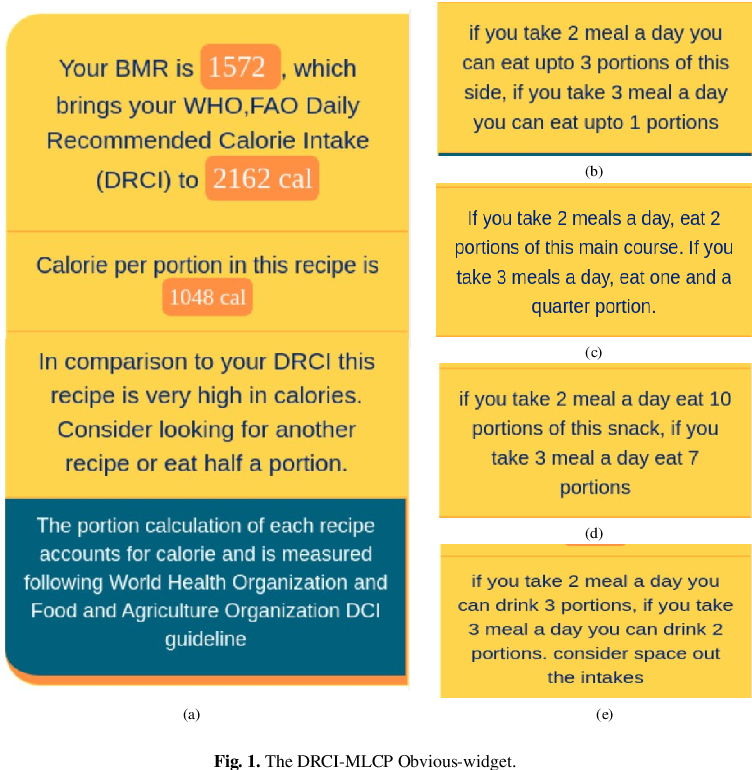 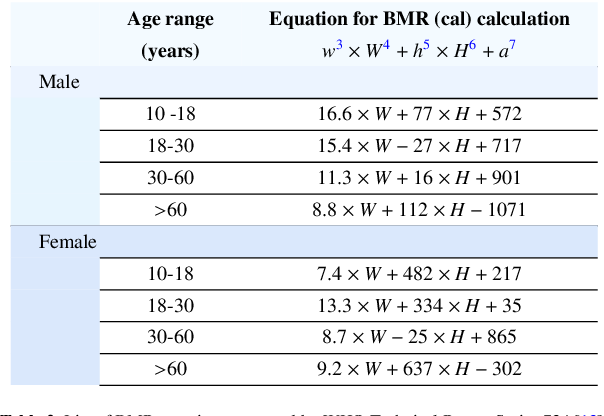 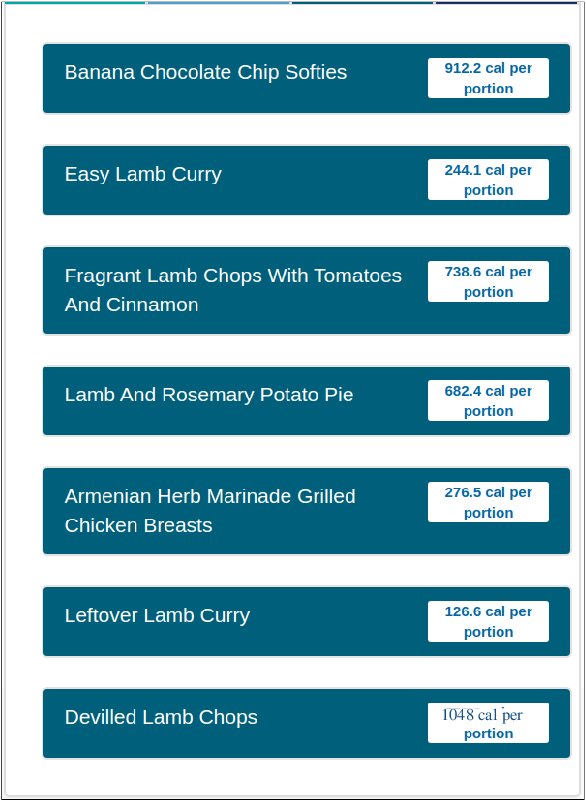 Food-choices and eating-habits directly contribute to our long-term health. This makes the food recommender system a potential tool to address the global crisis of obesity and malnutrition. Over the past decade, artificial-intelligence and medical researchers became more invested in researching tools that can guide and help people make healthy and thoughtful decisions around food and diet. In many typical (Recommender System) RS domains, smart nudges have been proven effective in shaping users' consumption patterns. In recent years, knowledgeable nudging and incentifying choices started getting attention in the food domain as well. To develop smart nudging for promoting healthier food choices, we combined Machine Learning and RS technology with food-healthiness guidelines from recognized health organizations, such as the World Health Organization, Food Standards Agency, and the National Health Service United Kingdom. In this paper, we discuss our research on, persuasive visualization for making users aware of the healthiness of the recommended recipes. Here, we propose three novel nudging technology, the WHO-BubbleSlider, the FSA-ColorCoading, and the DRCI-MLCP, that encourage users to choose healthier recipes. We also propose a Topic Modeling based portion-size recommendation algorithm. To evaluate our proposed smart-nudges, we conducted an online user study with 96 participants and 92250 recipes. Results showed that, during the food decision-making process, appropriate healthiness cues make users more likely to click, browse, and choose healthier recipes over less healthy ones. 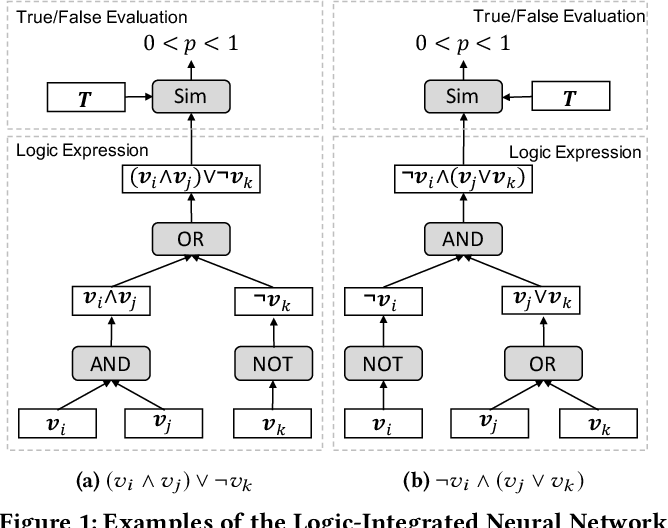 Recent years have witnessed the success of deep neural networks in many research areas. The fundamental idea behind the design of most neural networks is to learn similarity patterns from data for prediction and inference, which lacks the ability of cognitive reasoning. However, the concrete ability of reasoning is critical to many theoretical and practical problems. On the other hand, traditional symbolic reasoning methods do well in making logical inference, but they are mostly hard rule-based reasoning, which limits their generalization ability to different tasks since difference tasks may require different rules. Both reasoning and generalization ability are important for prediction tasks such as recommender systems, where reasoning provides strong connection between user history and target items for accurate prediction, and generalization helps the model to draw a robust user portrait over noisy inputs. In this paper, we propose Logic-Integrated Neural Network (LINN) to integrate the power of deep learning and logic reasoning. LINN is a dynamic neural architecture that builds the computational graph according to input logical expressions. It learns basic logical operations such as AND, OR, NOT as neural modules, and conducts propositional logical reasoning through the network for inference. Experiments on theoretical task show that LINN achieves significant performance on solving logical equations and variables. Furthermore, we test our approach on the practical task of recommendation by formulating the task into a logical inference problem. Experiments show that LINN significantly outperforms state-of-the-art recommendation models in Top-K recommendation, which verifies the potential of LINN in practice. 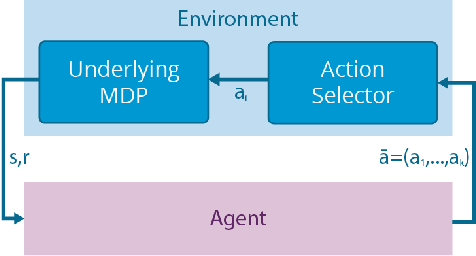 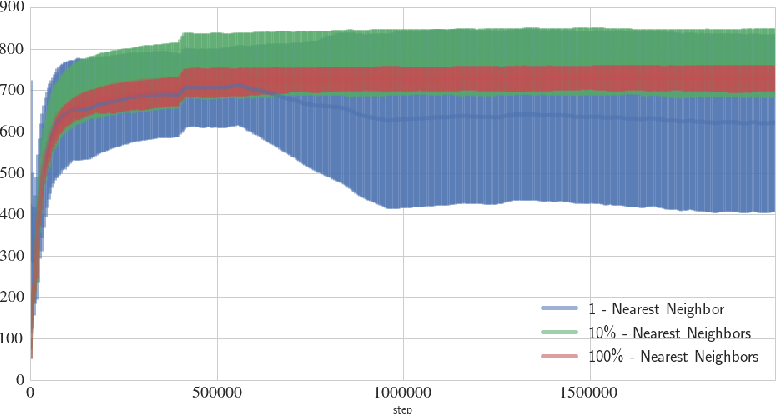 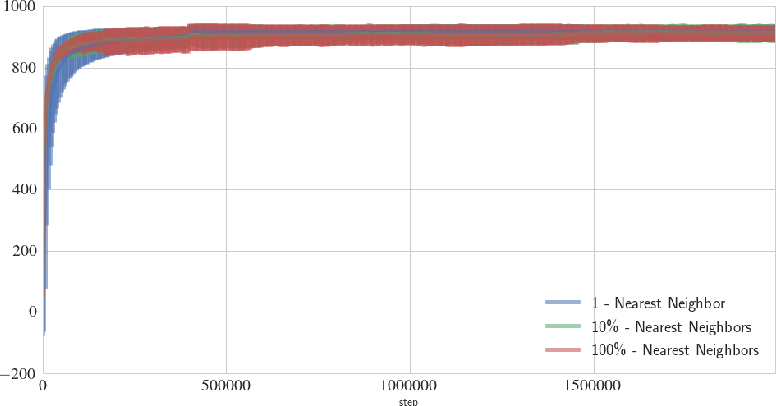 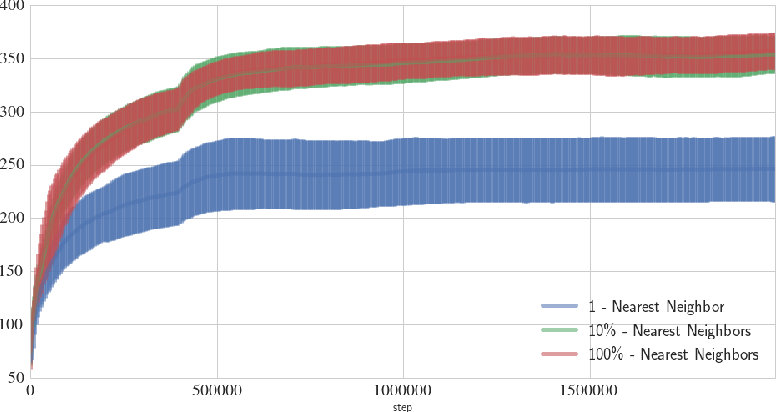 Many real-world problems come with action spaces represented as feature vectors. Although high-dimensional control is a largely unsolved problem, there has recently been progress for modest dimensionalities. Here we report on a successful attempt at addressing problems of dimensionality as high as $2000$, of a particular form. Motivated by important applications such as recommendation systems that do not fit the standard reinforcement learning frameworks, we introduce Slate Markov Decision Processes (slate-MDPs). A Slate-MDP is an MDP with a combinatorial action space consisting of slates (tuples) of primitive actions of which one is executed in an underlying MDP. The agent does not control the choice of this executed action and the action might not even be from the slate, e.g., for recommendation systems for which all recommendations can be ignored. We use deep Q-learning based on feature representations of both the state and action to learn the value of whole slates. Unlike existing methods, we optimize for both the combinatorial and sequential aspects of our tasks. The new agent's superiority over agents that either ignore the combinatorial or sequential long-term value aspect is demonstrated on a range of environments with dynamics from a real-world recommendation system. Further, we use deep deterministic policy gradients to learn a policy that for each position of the slate, guides attention towards the part of the action space in which the value is the highest and we only evaluate actions in this area. The attention is used within a sequentially greedy procedure leveraging submodularity. Finally, we show how introducing risk-seeking can dramatically improve the agents performance and ability to discover more far reaching strategies. 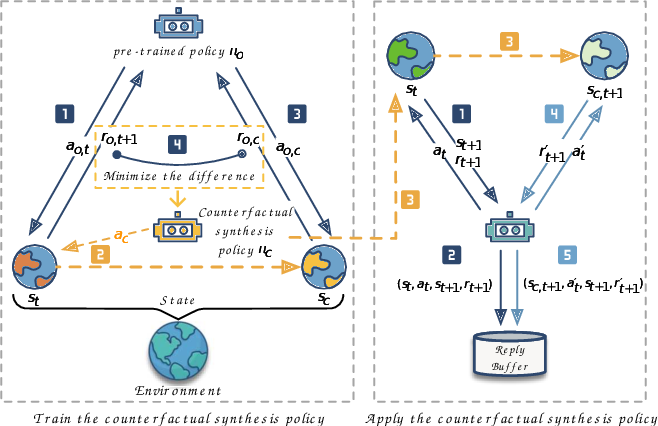 Interactive recommendation is able to learn from the interactive processes between users and systems to confront the dynamic interests of users. Recent advances have convinced that the ability of reinforcement learning to handle the dynamic process can be effectively applied in the interactive recommendation. However, the sparsity of interactive data may hamper the performance of the system. We propose to train a Model-agnostic Counterfactual Synthesis Policy to generate counterfactual data and address the data sparsity problem by modelling from observation and counterfactual distribution. The proposed policy can identify and replace the trivial components for any state in the training process with other agents, which can be deployed in any RL-based algorithm. The experimental results demonstrate the effectiveness and generality of our proposed policy. 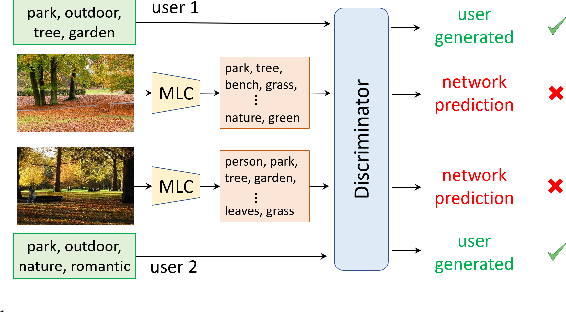 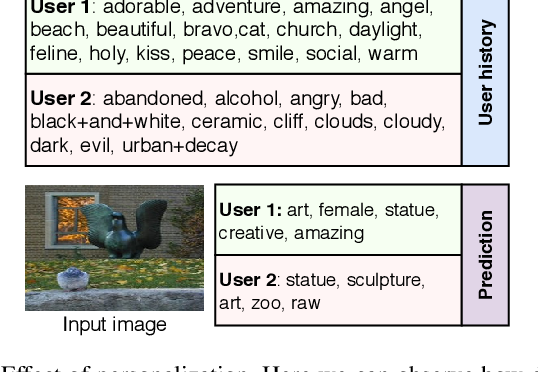 We have recently seen great progress in image classification due to the success of deep convolutional neural networks and the availability of large-scale datasets. Most of the existing work focuses on single-label image classification. However, there are usually multiple tags associated with an image. The existing works on multi-label classification are mainly based on lab curated labels. Humans assign tags to their images differently, which is mainly based on their interests and personal tagging behavior. In this paper, we address the problem of personalized tag recommendation and propose an end-to-end deep network which can be trained on large-scale datasets. The user-preference is learned within the network in an unsupervised way where the network performs joint optimization for user-preference and visual encoding. A joint training of user-preference and visual encoding allows the network to efficiently integrate the visual preference with tagging behavior for a better user recommendation. In addition, we propose the use of adversarial learning, which enforces the network to predict tags resembling user-generated tags. We demonstrate the effectiveness of the proposed model on two different large-scale and publicly available datasets, YFCC100M and NUS-WIDE. The proposed method achieves significantly better performance on both the datasets when compared to the baselines and other state-of-the-art methods. The code is publicly available at https://github.com/vyzuer/ALTReco. 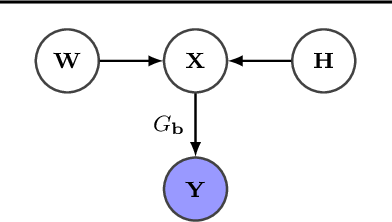 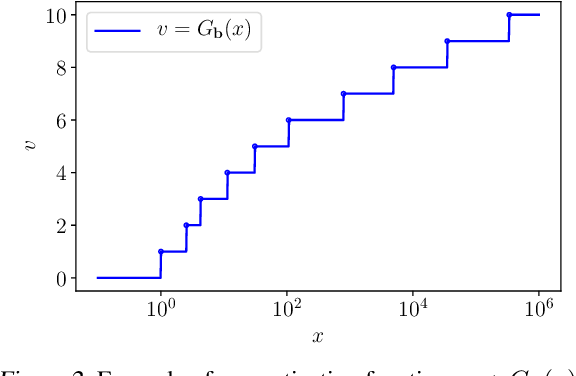 We introduce a new non-negative matrix factorization (NMF) method for ordinal data, called OrdNMF. Ordinal data are categorical data which exhibit a natural ordering between the categories. In particular, they can be found in recommender systems, either with explicit data (such as ratings) or implicit data (such as quantized play counts). OrdNMF is a probabilistic latent factor model that generalizes Bernoulli-Poisson factorization (BePoF) and Poisson factorization (PF) applied to binarized data. Contrary to these methods, OrdNMF circumvents binarization and can exploit a more informative representation of the data. We design an efficient variational algorithm based on a suitable model augmentation and related to variational PF. In particular, our algorithm preserves the scalability of PF and can be applied to huge sparse datasets. We report recommendation experiments on explicit and implicit datasets, and show that OrdNMF outperforms BePoF and PF applied to binarized data.


* Accepted for publication at ICML 2020