RON: Reverse Connection with Objectness Prior Networks for Object Detection 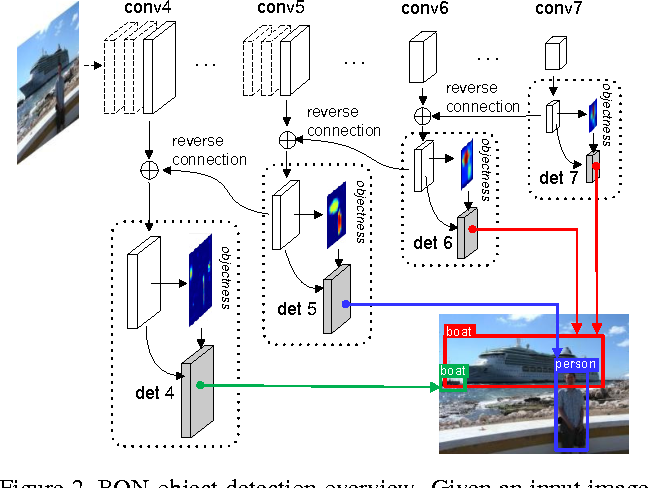 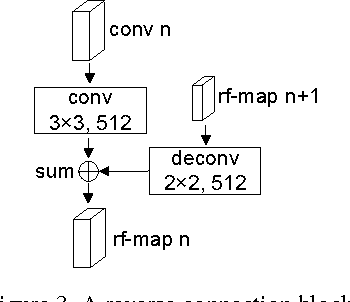 We present RON, an efficient and effective framework for generic object detection. Our motivation is to smartly associate the best of the region-based (e.g., Faster R-CNN) and region-free (e.g., SSD) methodologies. Under fully convolutional architecture, RON mainly focuses on two fundamental problems: (a) multi-scale object localization and (b) negative sample mining. To address (a), we design the reverse connection, which enables the network to detect objects on multi-levels of CNNs. To deal with (b), we propose the objectness prior to significantly reduce the searching space of objects. We optimize the reverse connection, objectness prior and object detector jointly by a multi-task loss function, thus RON can directly predict final detection results from all locations of various feature maps. Extensive experiments on the challenging PASCAL VOC 2007, PASCAL VOC 2012 and MS COCO benchmarks demonstrate the competitive performance of RON. Specifically, with VGG-16 and low resolution 384X384 input size, the network gets 81.3% mAP on PASCAL VOC 2007, 80.7% mAP on PASCAL VOC 2012 datasets. Its superiority increases when datasets become larger and more difficult, as demonstrated by the results on the MS COCO dataset. With 1.5G GPU memory at test phase, the speed of the network is 15 FPS, 3X faster than the Faster R-CNN counterpart.


* Project page will be available at https://github.com/taokong/RON, and formal paper will appear in CVPR 2017 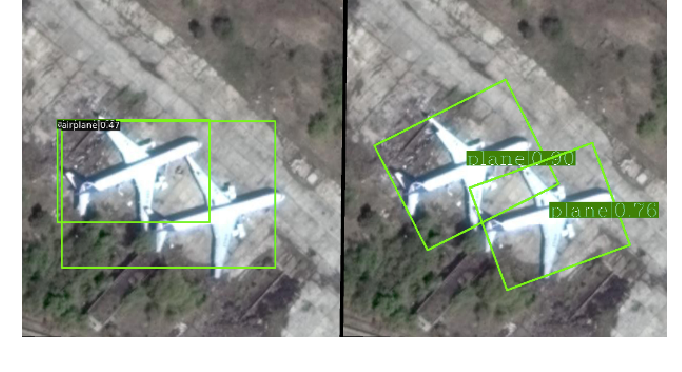 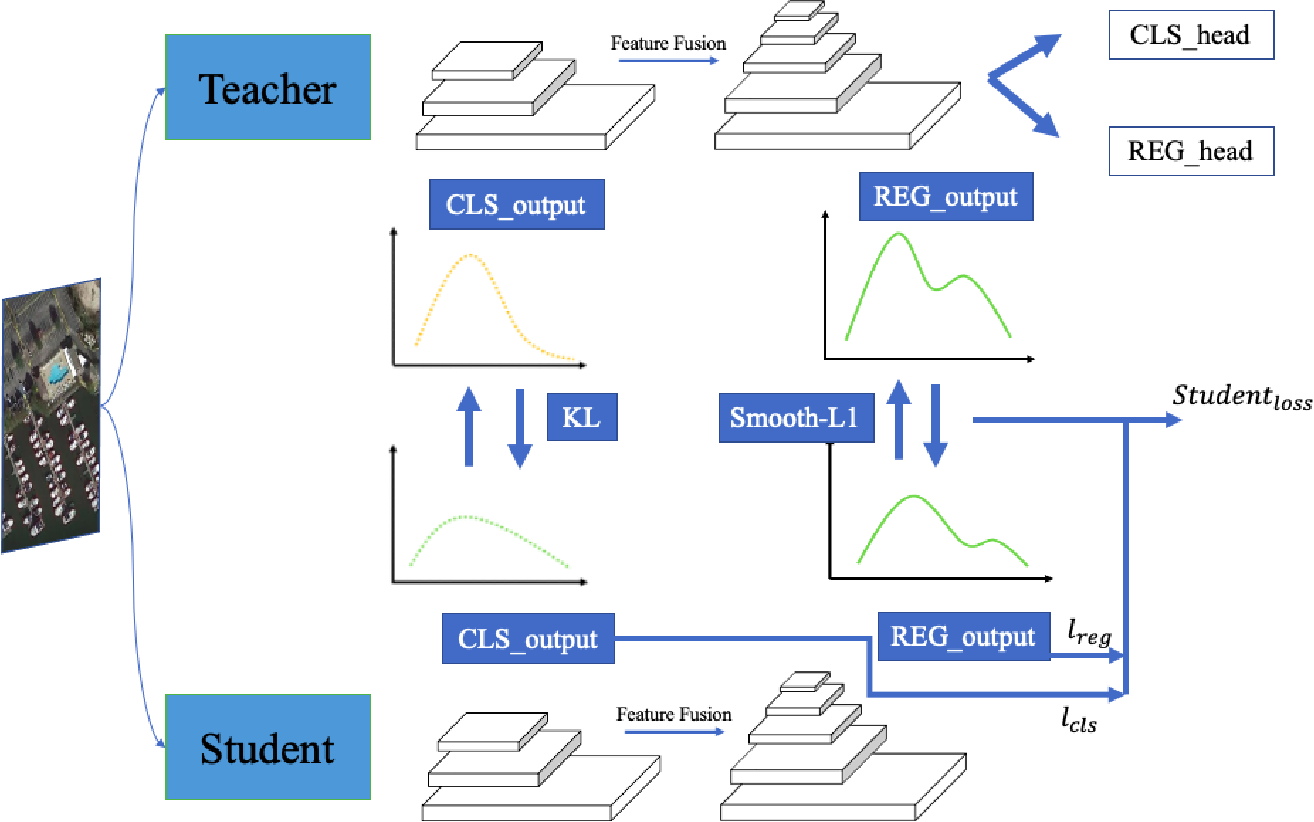 Deep convolutional neural network with increased number of parameters has achieved improved precision in task of object detection on natural images, where objects of interests are annotated with horizontal boundary boxes. On aerial images captured from the bird-view perspective, these improvements on model architecture and deeper convolutional layers can also boost the performance on oriented object detection task. However, it is hard to directly apply those state-of-the-art object detectors on the devices with limited computation resources, which necessitates lightweight models through model compression. In order to address this issue, we present a model compression method for rotated object detection on aerial images by knowledge distillation, namely KD-RNet. With a well-trained teacher oriented object detector with a large number of parameters, the obtained object category and location information are both transferred to a compact student network in KD-RNet by collaborative training strategy. Transferring the category information is achieved by knowledge distillation on predicted probability distribution, and a soft regression loss is adopted for handling displacement in location information transfer. The experimental result on a large-scale aerial object detection dataset (DOTA) demonstrates that the proposed KD-RNet model can achieve improved mean-average precision (mAP) with reduced number of parameters, at the same time, KD-RNet boost the performance on providing high quality detections with higher overlap with groundtruth annotations. 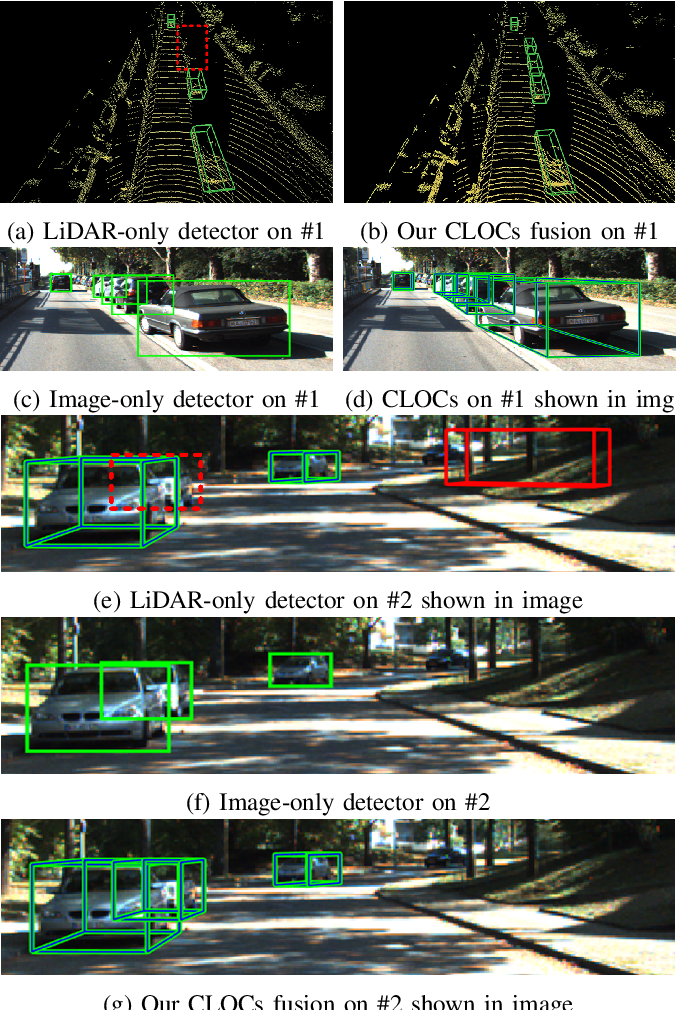 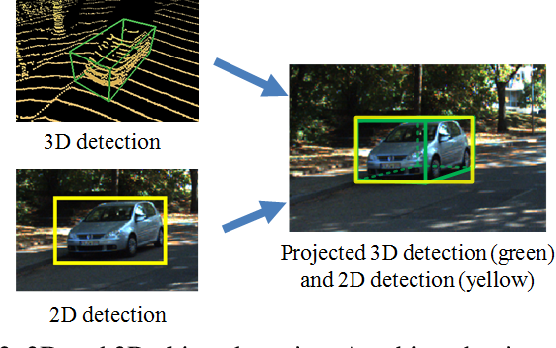 There have been significant advances in neural networks for both 3D object detection using LiDAR and 2D object detection using video. However, it has been surprisingly difficult to train networks to effectively use both modalities in a way that demonstrates gain over single-modality networks. In this paper, we propose a novel Camera-LiDAR Object Candidates (CLOCs) fusion network. CLOCs fusion provides a low-complexity multi-modal fusion framework that significantly improves the performance of single-modality detectors. CLOCs operates on the combined output candidates before Non-Maximum Suppression (NMS) of any 2D and any 3D detector, and is trained to leverage their geometric and semantic consistencies to produce more accurate final 3D and 2D detection results. Our experimental evaluation on the challenging KITTI object detection benchmark, including 3D and bird's eye view metrics, shows significant improvements, especially at long distance, over the state-of-the-art fusion based methods. At time of submission, CLOCs ranks the highest among all the fusion-based methods in the official KITTI leaderboard. We will release our code upon acceptance. 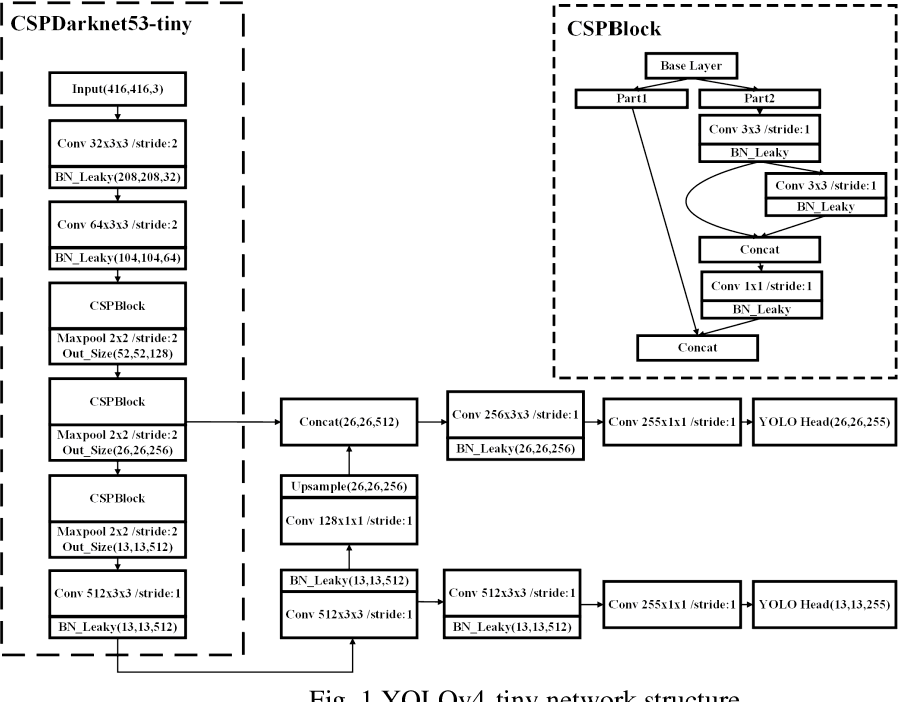 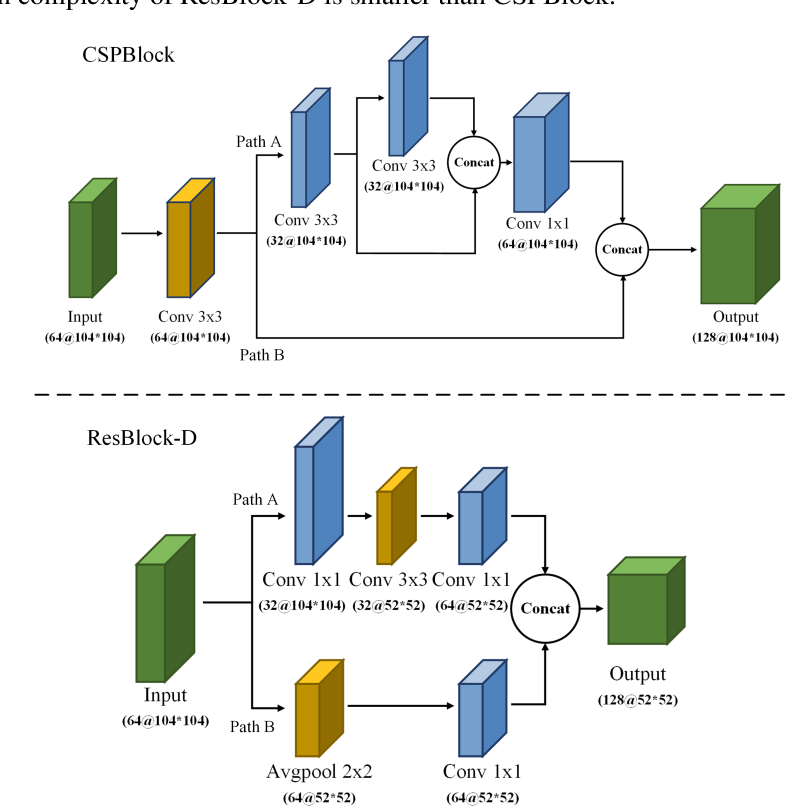 The "You only look once v4"(YOLOv4) is one type of object detection methods in deep learning. YOLOv4-tiny is proposed based on YOLOv4 to simple the network structure and reduce parameters, which makes it be suitable for developing on the mobile and embedded devices. To improve the real-time of object detection, a fast object detection method is proposed based on YOLOv4-tiny. It firstly uses two ResBlock-D modules in ResNet-D network instead of two CSPBlock modules in Yolov4-tiny, which reduces the computation complexity. Secondly, it designs an auxiliary residual network block to extract more feature information of object to reduce detection error. In the design of auxiliary network, two consecutive 3x3 convolutions are used to obtain 5x5 receptive fields to extract global features, and channel attention and spatial attention are also used to extract more effective information. In the end, it merges the auxiliary network and backbone network to construct the whole network structure of improved YOLOv4-tiny. Simulation results show that the proposed method has faster object detection than YOLOv4-tiny and YOLOv3-tiny, and almost the same mean value of average precision as the YOLOv4-tiny. It is more suitable for real-time object detection. 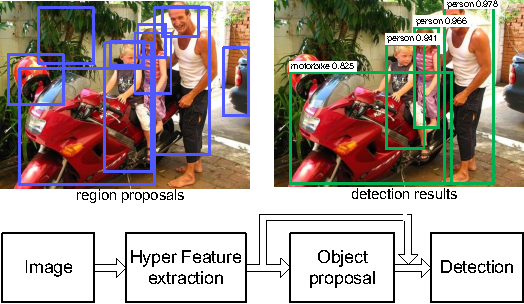 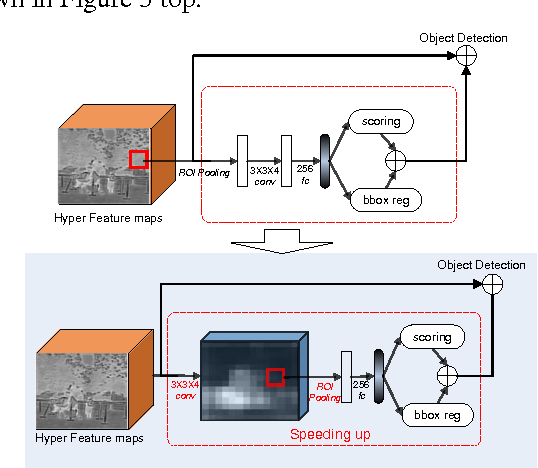 Almost all of the current top-performing object detection networks employ region proposals to guide the search for object instances. State-of-the-art region proposal methods usually need several thousand proposals to get high recall, thus hurting the detection efficiency. Although the latest Region Proposal Network method gets promising detection accuracy with several hundred proposals, it still struggles in small-size object detection and precise localization (e.g., large IoU thresholds), mainly due to the coarseness of its feature maps. In this paper, we present a deep hierarchical network, namely HyperNet, for handling region proposal generation and object detection jointly. Our HyperNet is primarily based on an elaborately designed Hyper Feature which aggregates hierarchical feature maps first and then compresses them into a uniform space. The Hyper Features well incorporate deep but highly semantic, intermediate but really complementary, and shallow but naturally high-resolution features of the image, thus enabling us to construct HyperNet by sharing them both in generating proposals and detecting objects via an end-to-end joint training strategy. For the deep VGG16 model, our method achieves completely leading recall and state-of-the-art object detection accuracy on PASCAL VOC 2007 and 2012 using only 100 proposals per image. It runs with a speed of 5 fps (including all steps) on a GPU, thus having the potential for real-time processing.


* Accepted as a spotlight oral paper by CVPR 2016 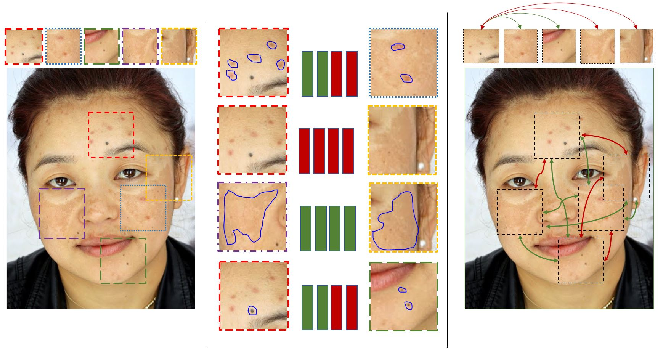 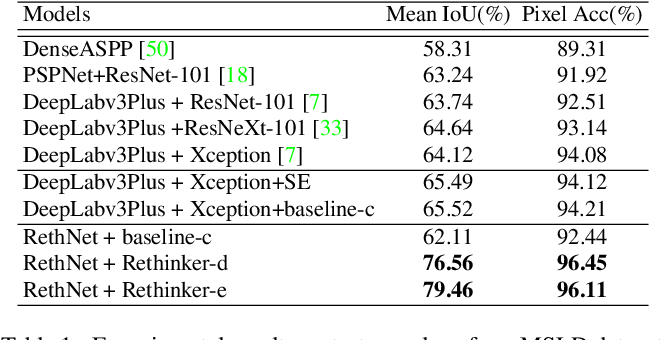 Semantic segmentation is a hot topic in computer vision where the most challenging tasks of object detection and recognition have been handling by the success of semantic segmentation approaches. We propose a concept of object-by-object learning technique to detect 11 types of facial skin lesions using semantic segmentation methods. Detecting individual skin lesion in a dense group is a challenging task, because of ambiguities in the appearance of the visual data. We observe that there exist co-occurrent visual relations between object classes (e.g., wrinkle and age spot, or papule and whitehead, etc.). In fact, rich contextual information significantly helps to handle the issue. Therefore, we propose REthinker blocks that are composed of the locally constructed convLSTM/Conv3D layers and SE module as a one-shot attention mechanism whose responsibility is to increase network's sensitivity in the local and global contextual representation that supports to capture ambiguously appeared objects and co-occurrence interactions between object classes. Experiments show that our proposed model reached MIoU of 79.46% on the test of a prepared dataset, representing a 15.34% improvement over Deeplab v3+ (MIoU of 64.12%). 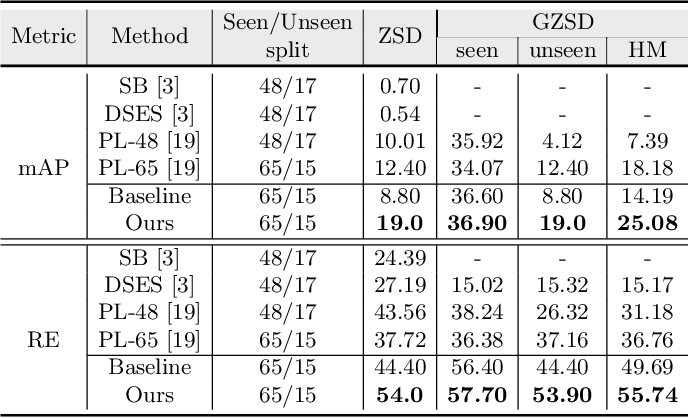 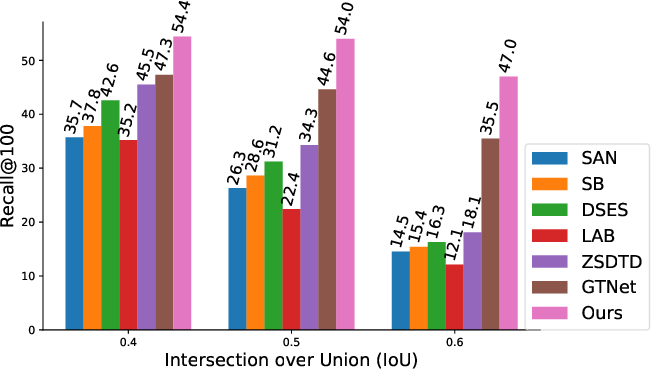 The existing zero-shot detection approaches project visual features to the semantic domain for seen objects, hoping to map unseen objects to their corresponding semantics during inference. However, since the unseen objects are never visualized during training, the detection model is skewed towards seen content, thereby labeling unseen as background or a seen class. In this work, we propose to synthesize visual features for unseen classes, so that the model learns both seen and unseen objects in the visual domain. Consequently, the major challenge becomes, how to accurately synthesize unseen objects merely using their class semantics? Towards this ambitious goal, we propose a novel generative model that uses class-semantics to not only generate the features but also to discriminatively separate them. Further, using a unified model, we ensure the synthesized features have high diversity that represents the intra-class differences and variable localization precision in the detected bounding boxes. We test our approach on three object detection benchmarks, PASCAL VOC, MSCOCO, and ILSVRC detection, under both conventional and generalized settings, showing impressive gains over the state-of-the-art methods. Our codes are available at https://github.com/nasir6/zero_shot_detection.


* Accepted for publication at ACCV 2020 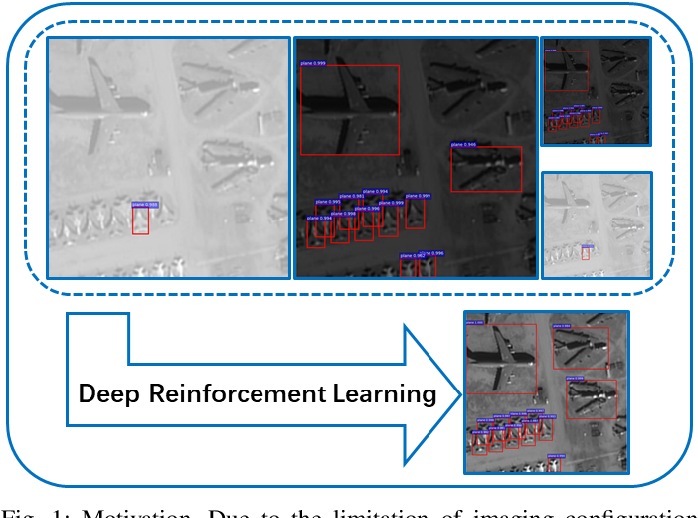 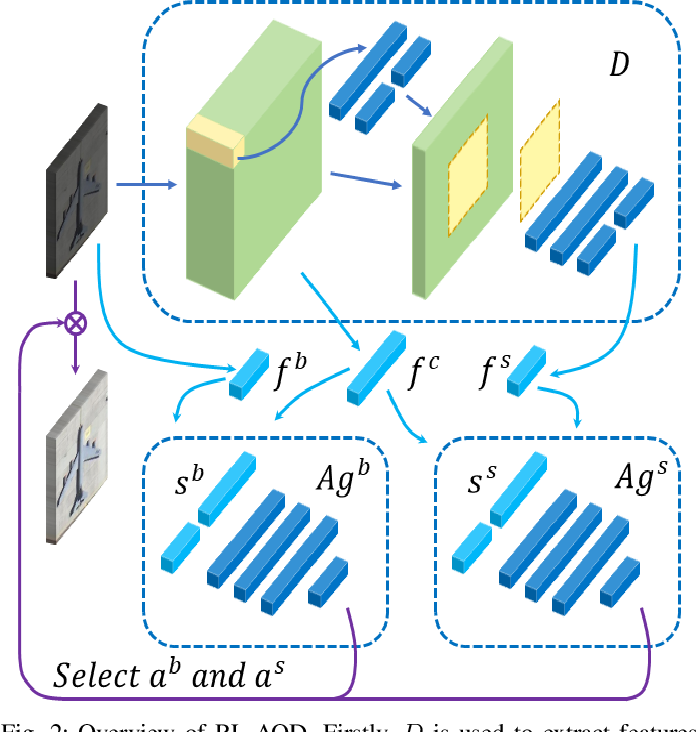 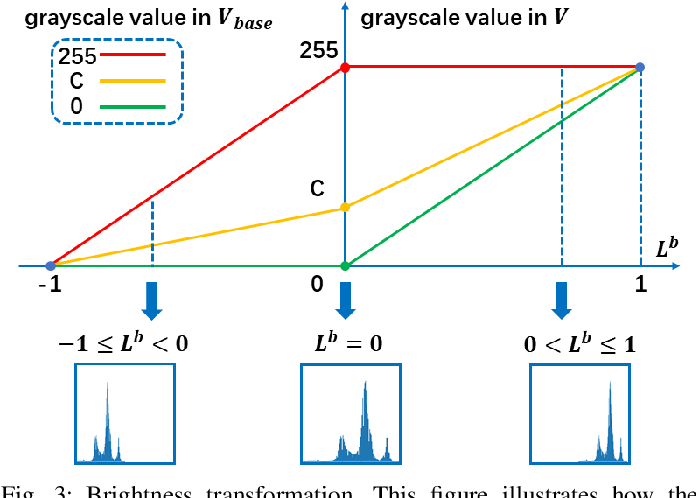 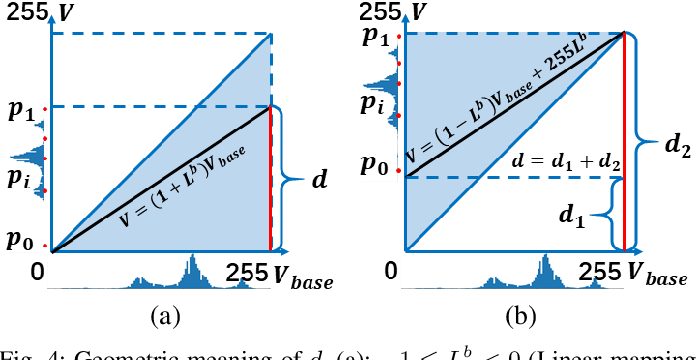 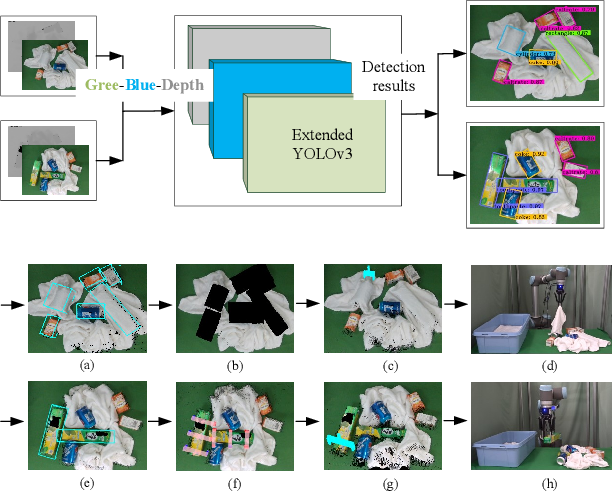 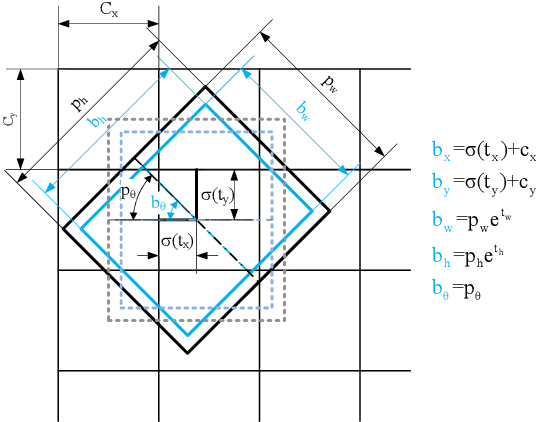 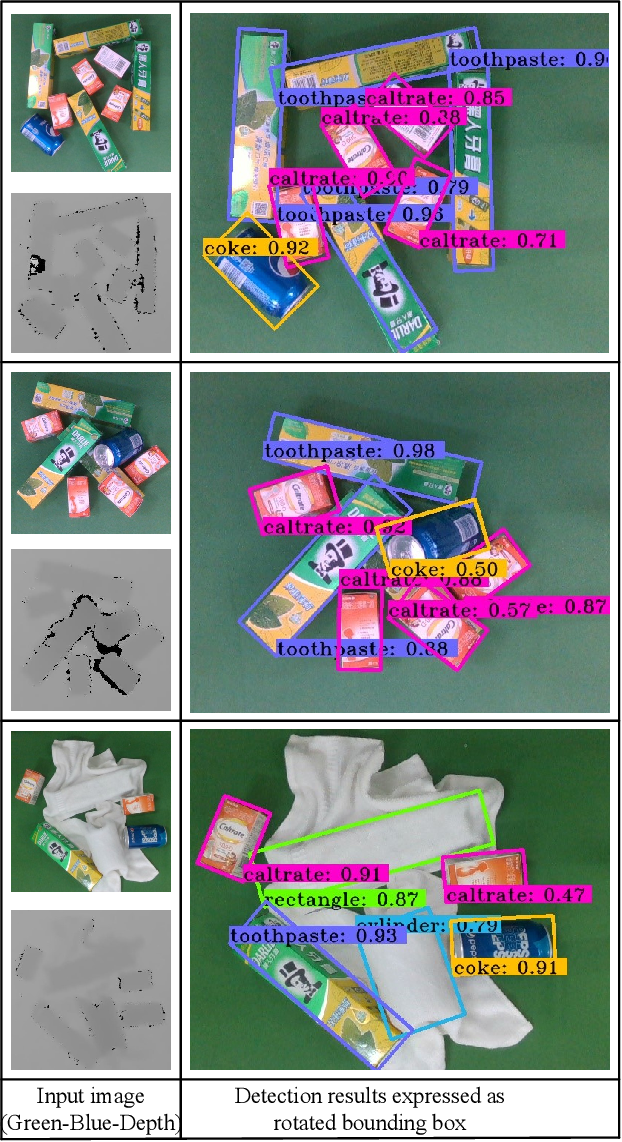 In this paper, we propose a object detection method expressed as rotated bounding box to solve grasping challenge in the scenes where rigid objects and soft objects are mixed together. Compared with traditional detection methods, this method can output the angle information of rotated objects and thus can guarantee that within each rotated bounding box, there is a single instance. This technology is especially useful in the case of pile of objects with different orientations. In our method, when uncategorized objects with specific geometry shapes (rectangle or cylinder) are detected, the program will conclude that some rigid objects are covered by the towels. If no covered objects are detected, the grasp planning is based on 3D point cloud obtained from the mapping between 2D object detection result and its corresponding 3D point cloud. Based on the information provided by the 3D bounding box covering the object, grasping strategy for multiple cluttered rigid objects, collision avoidance strategy are proposed. The proposed method is verified by the experiment in which rigid objects and towels are mixed together.