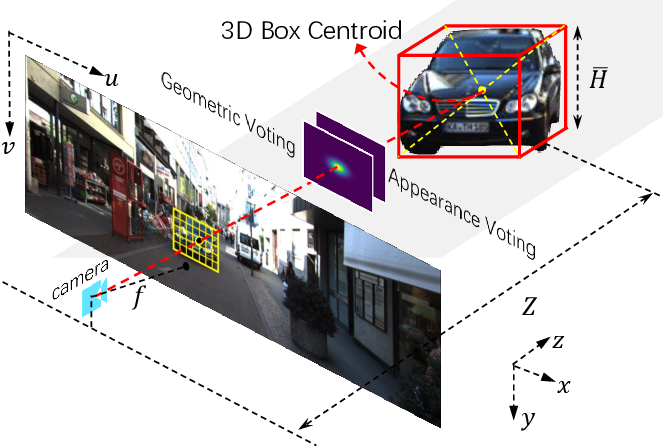 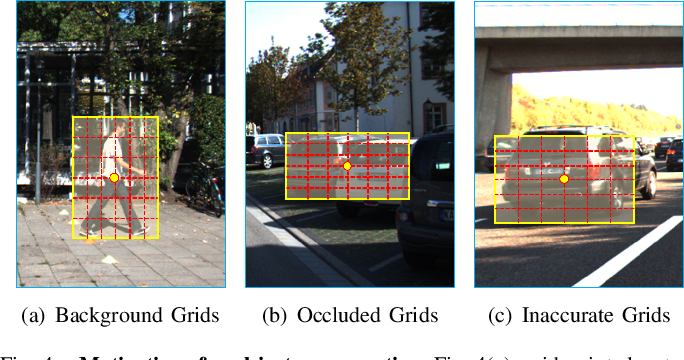 Monocular 3D object detection aims to detect objects in a 3D physical world from a single camera. However, recent approaches either rely on expensive LiDAR devices, or resort to dense pixel-wise depth estimation that causes prohibitive computational cost. In this paper, we propose an end-to-end trainable monocular 3D object detector without learning the dense depth. Specifically, the grid coordinates of a 2D box are first projected back to 3D space with the pinhole model as 3D centroids proposals. Then, a novel object-aware voting approach is introduced, which considers both the region-wise appearance attention and the geometric projection distribution, to vote the 3D centroid proposals for 3D object localization. With the late fusion and the predicted 3D orientation and dimension, the 3D bounding boxes of objects can be detected from a single RGB image. The method is straightforward yet significantly superior to other monocular-based methods. Extensive experimental results on the challenging KITTI benchmark validate the effectiveness of the proposed method. 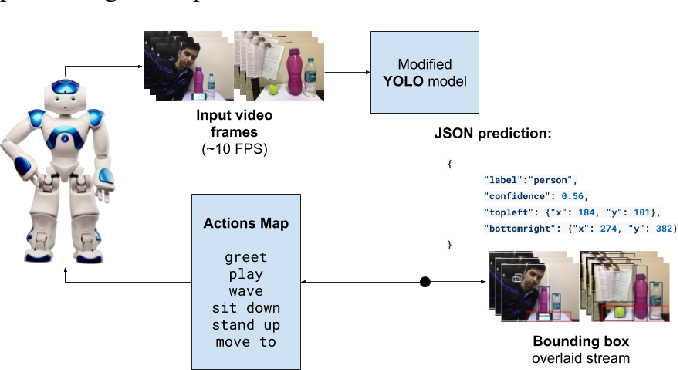 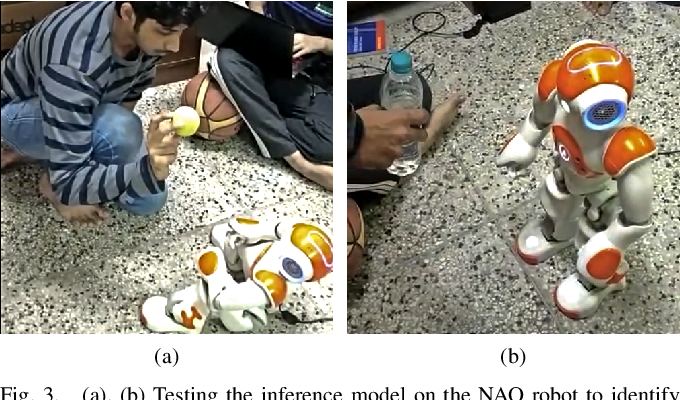 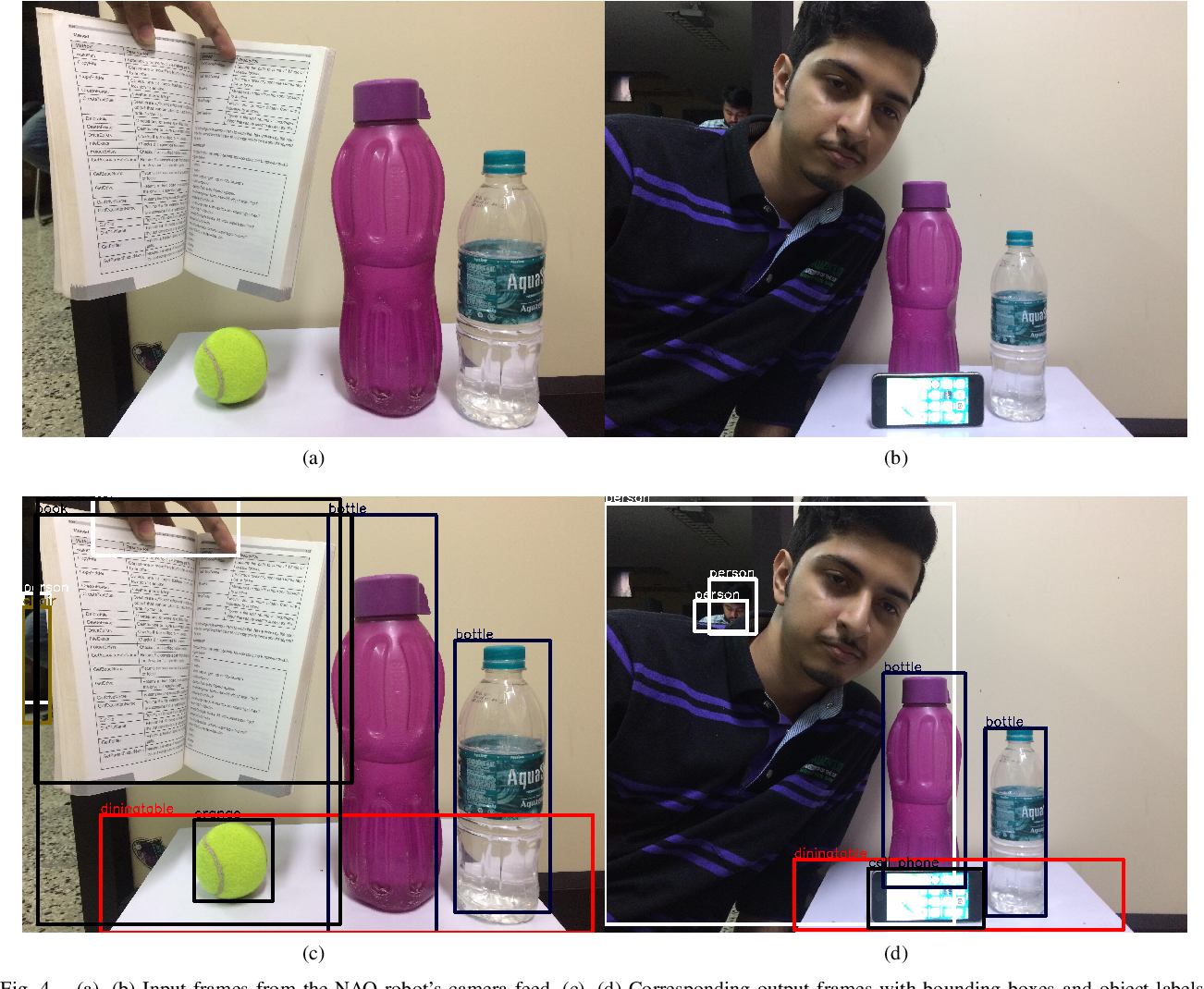 We envision that in the near future, humanoid robots would share home space and assist us in our daily and routine activities through object manipulations. One of the fundamental technologies that need to be developed for robots is to enable them to detect objects and recognize them for effective manipulations and take real-time decisions involving those objects. In this paper, we describe a novel architecture that enables multiple low-compute NAO robots to perform real-time detection, recognition and localization of objects in its camera view and take programmable actions based on the detected objects. The proposed algorithm for object detection and localization is an empirical modification of YOLOv3, based on indoor experiments in multiple scenarios, with a smaller weight size and lesser computational requirements. Quantization of the weights and re-adjusting filter sizes and layer arrangements for convolutions improved the inference time for low-resolution images from the robot s camera feed. YOLOv3 was chosen after a comparative study of bounding box algorithms was performed with an objective to choose one that strikes the perfect balance among information retention, low inference time and high accuracy for real-time object detection and localization. The architecture also comprises of an effective end-to-end pipeline to feed the real-time frames from the camera feed to the neural net and use its results for guiding the robot with customizable actions corresponding to the detected class labels. 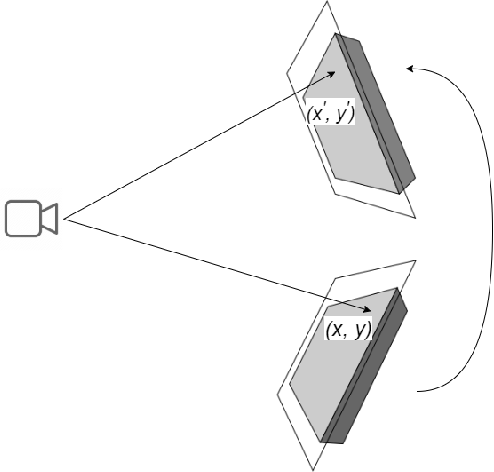 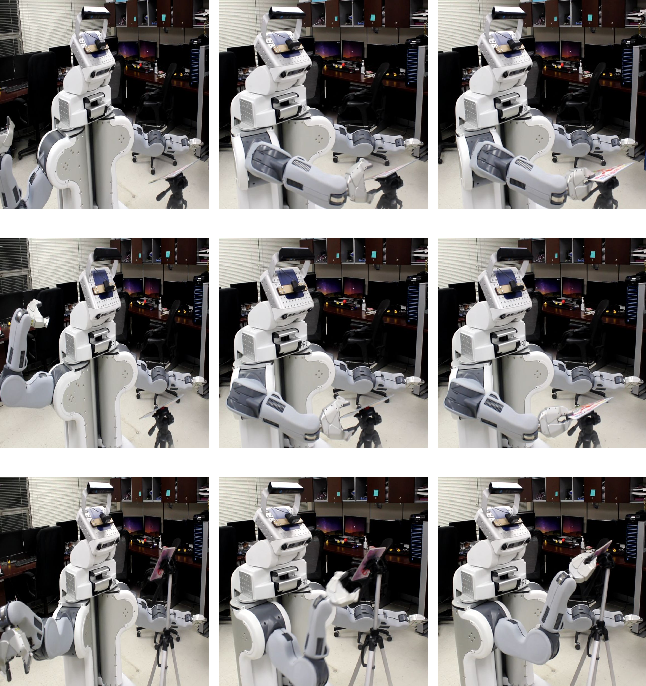 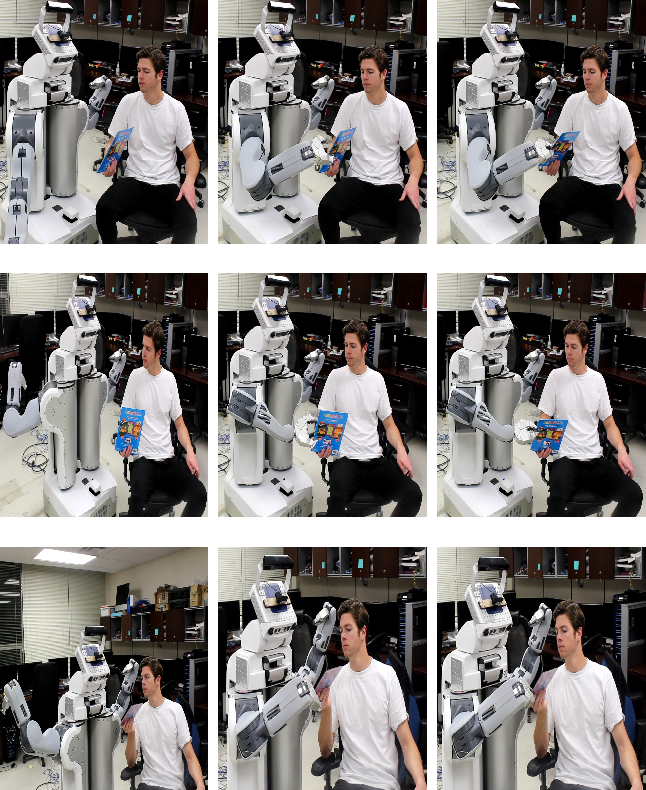 In recent times, object detection and pose estimation have gained significant attention in the context of robotic vision applications. Both the identification of objects of interest as well as the estimation of their pose remain important capabilities in order for robots to provide effective assistance for numerous robotic applications ranging from household tasks to industrial manipulation. This problem is particularly challenging because of the heterogeneity of objects having different and potentially complex shapes, and the difficulties arising due to background clutter and partial occlusions between objects. As the main contribution of this work, we propose a system that performs real-time object detection and pose estimation, for the purpose of dynamic robot grasping. The robot has been pre-trained to perform a small set of canonical grasps from a few fixed poses for each object. When presented with an unknown object in an arbitrary pose, the proposed approach allows the robot to detect the object identity and its actual pose, and then adapt a canonical grasp in order to be used with the new pose. For training, the system defines a canonical grasp by capturing the relative pose of an object with respect to the gripper attached to the robot's wrist. During testing, once a new pose is detected, a canonical grasp for the object is identified and then dynamically adapted by adjusting the robot arm's joint angles, so that the gripper can grasp the object in its new pose. We conducted experiments using a humanoid PR2 robot and showed that the proposed framework can detect well-textured objects, and provide accurate pose estimation in the presence of tolerable amounts of out-of-plane rotation. The performance is also illustrated by the robot successfully grasping objects from a wide range of arbitrary poses. 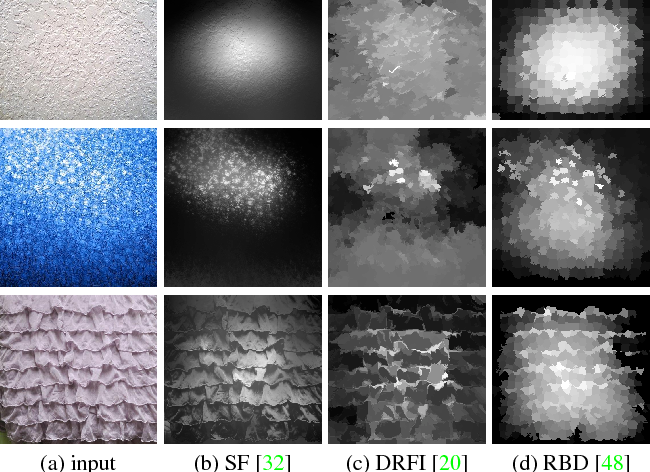 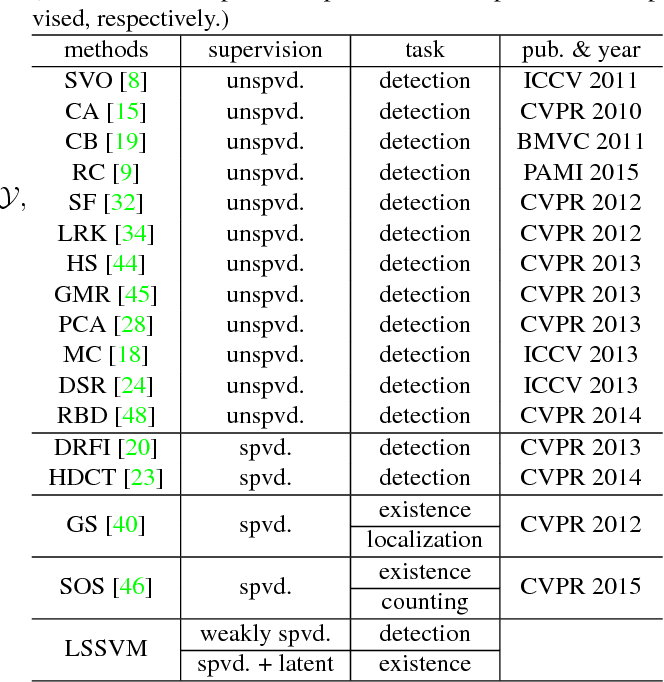 A Delay Metric for Video Object Detection: What Average Precision Fails to Tell 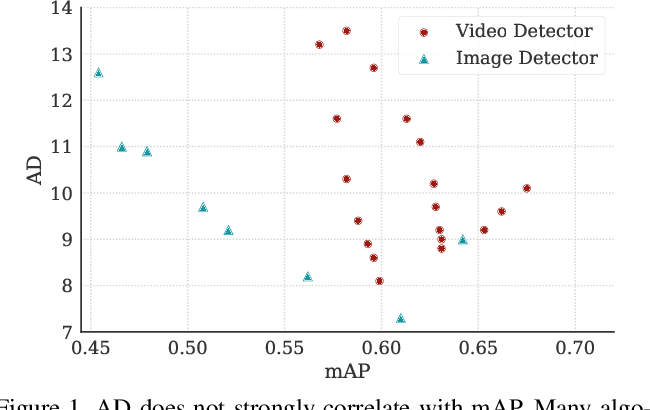 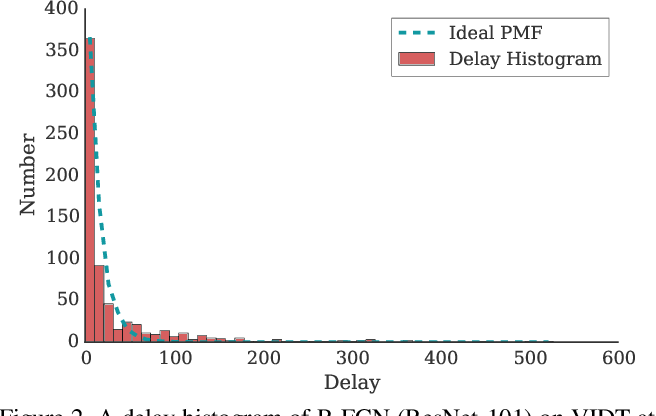 Average precision (AP) is a widely used metric to evaluate detection accuracy of image and video object detectors. In this paper, we analyze object detection from videos and point out that AP alone is not sufficient to capture the temporal nature of video object detection. To tackle this problem, we propose a comprehensive metric, average delay (AD), to measure and compare detection delay. To facilitate delay evaluation, we carefully select a subset of ImageNet VID, which we name as ImageNet VIDT with an emphasis on complex trajectories. By extensively evaluating a wide range of detectors on VIDT, we show that most methods drastically increase the detection delay but still preserve AP well. In other words, AP is not sensitive enough to reflect the temporal characteristics of a video object detector. Our results suggest that video object detection methods should be additionally evaluated with a delay metric, particularly for latency-critical applications such as autonomous vehicle perception. 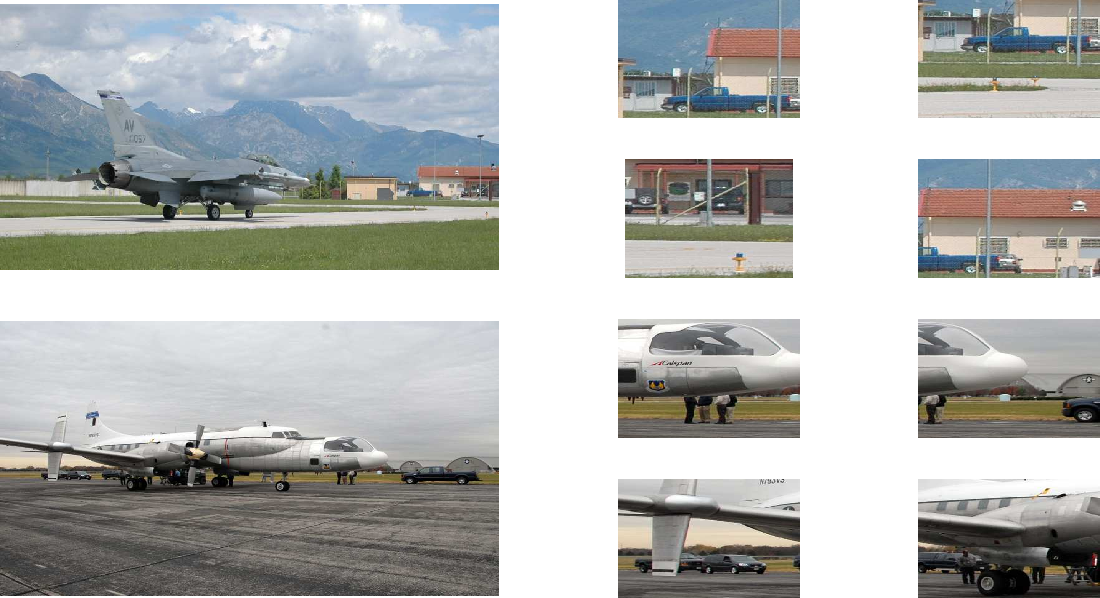 Efficient generation of high-quality object proposals is an essential step in state-of-the-art object detection systems based on deep convolutional neural networks (DCNN) features. Current object proposal algorithms are computationally inefficient in processing high resolution images containing small objects, which makes them the bottleneck in object detection systems. In this paper we present effective methods to detect objects for high resolution images. We combine two complementary strategies. The first approach is to predict bounding boxes based on adjacent visual features. The second approach uses high level image features to guide a two-step search process that adaptively focuses on regions that are likely to contain small objects. We extract features required for the two strategies by utilizing a pre-trained DCNN model known as AlexNet. We demonstrate the effectiveness of our algorithm by showing its performance on a high-resolution image subset of the SUN 2012 object detection dataset.

Automatic detection of prohibited objects within passenger baggage is important for aviation security. X-ray Computed Tomography (CT) based 3D imaging is widely used in airports for aviation security screening whilst prior work on automatic prohibited item detection focus primarily on 2D X-ray imagery. These works have proven the possibility of extending deep convolutional neural networks (CNN) based automatic prohibited item detection from 2D X-ray imagery to volumetric 3D CT baggage security screening imagery. However, previous work on 3D object detection in baggage security screening imagery focused on the detection of one specific type of objects (e.g., either {\it bottles} or {\it handguns}). As a result, multiple models are needed if more than one type of prohibited item is required to be detected in practice. In this paper, we consider the detection of multiple object categories of interest using one unified framework. To this end, we formulate a more challenging multi-class 3D object detection problem within 3D CT imagery and propose a viable solution (3D RetinaNet) to tackle this problem. To enhance the performance of detection we investigate a variety of strategies including data augmentation and varying backbone networks. Experimentation carried out to provide both quantitative and qualitative evaluations of the proposed approach to multi-class 3D object detection within 3D CT baggage security screening imagery. Experimental results demonstrate the combination of the 3D RetinaNet and a series of favorable strategies can achieve a mean Average Precision (mAP) of 65.3\% over five object classes (i.e. {\it bottles, handguns, binoculars, glock frames, iPods}). The overall performance is affected by the poor performance on {\it glock frames} and {\it iPods} due to the lack of data and their resemblance with the baggage clutter. 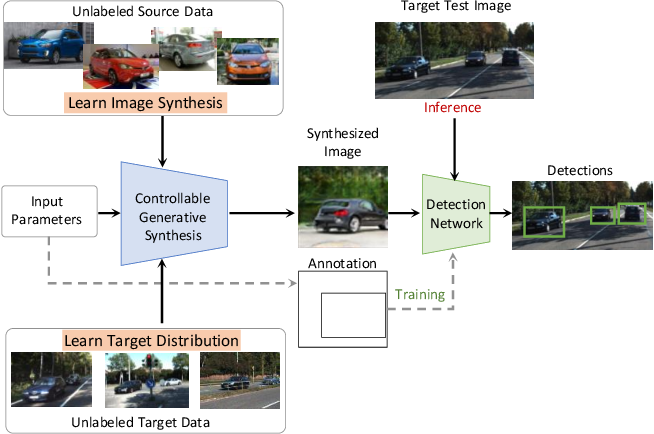 We present SSOD, the first end-to-end analysis-by synthesis framework with controllable GANs for the task of self-supervised object detection. We use collections of real world images without bounding box annotations to learn to synthesize and detect objects. We leverage controllable GANs to synthesize images with pre-defined object properties and use them to train object detectors. We propose a tight end-to-end coupling of the synthesis and detection networks to optimally train our system. Finally, we also propose a method to optimally adapt SSOD to an intended target data without requiring labels for it. For the task of car detection, on the challenging KITTI and Cityscapes datasets, we show that SSOD outperforms the prior state-of-the-art purely image-based self-supervised object detection method Wetectron. Even without requiring any 3D CAD assets, it also surpasses the state-of-the-art rendering based method Meta-Sim2. Our work advances the field of self-supervised object detection by introducing a successful new paradigm of using controllable GAN-based image synthesis for it and by significantly improving the baseline accuracy of the task. We open-source our code at https://github.com/NVlabs/SSOD.

Object Detection in Optical Remote Sensing Images: A Survey and A New Benchmark

Substantial efforts have been devoted more recently to presenting various methods for object detection in optical remote sensing images. However, the current survey of datasets and deep learning based methods for object detection in optical remote sensing images is not adequate. Moreover, most of the existing datasets have some shortcomings, for example, the numbers of images and object categories are small scale, and the image diversity and variations are insufficient. These limitations greatly affect the development of deep learning based object detection methods. In the paper, we provide a comprehensive review of the recent deep learning based object detection progress in both the computer vision and earth observation communities. Then, we propose a large-scale, publicly available benchmark for object DetectIon in Optical Remote sensing images, which we name as DIOR. The dataset contains 23463 images and 192472 instances, covering 20 object classes. The proposed DIOR dataset 1) is large-scale on the object categories, on the object instance number, and on the total image number; 2) has a large range of object size variations, not only in terms of spatial resolutions, but also in the aspect of inter- and intra-class size variability across objects; 3) holds big variations as the images are obtained with different imaging conditions, weathers, seasons, and image quality; and 4) has high inter-class similarity and intra-class diversity. The proposed benchmark can help the researchers to develop and validate their data-driven methods. Finally, we evaluate several state-of-the-art approaches on our DIOR dataset to establish a baseline for future research.