In this paper, we propose a new object detection model, Mixture-Model-based Object Detector (MMOD), that performs multi-object detection using a mixture model. Unlike previous studies, we use density estimation to deal with the multi-object detection task. MMOD captures the conditional distribution of bounding boxes for a given input image using a mixture model consisting of Gaussian and categorical distributions. For this purpose, we propose a method to extract object bounding boxes from a trained mixture model. In doing so, we also propose a new network structure and objective function for the MMOD. Our proposed method is not trained by assigning a ground truth bounding box to a specific location on the network's output. Instead, the mixture components are automatically learned to represent the distribution of the bounding box through density estimation. Therefore, MMOD does not require a large number of anchors and does not incur the positive-negative imbalance problem. This not only benefits the detection performance but also enhances the inference speed without requiring additional processing. We applied MMOD to Pascal VOC and MS COCO datasets, and outperform the detection performance with inference speed of other state-of-the-art fast object detection methods. (38.7 AP with 39ms per image on MS COCO without bells and whistles.) Code will be available. 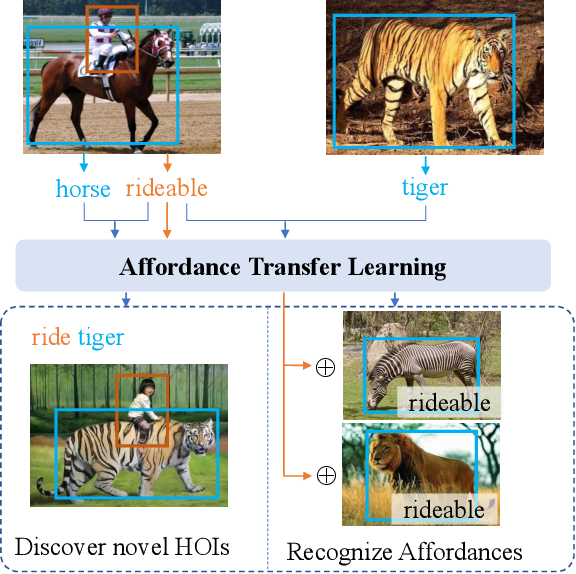 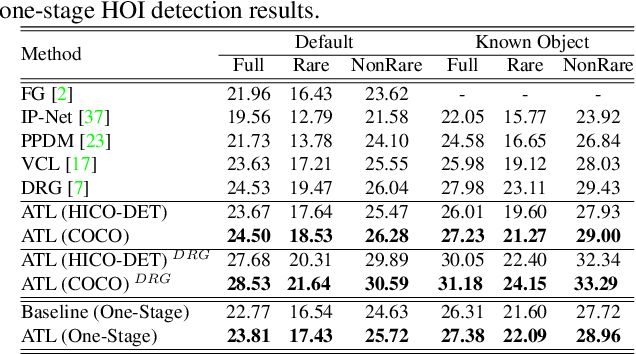 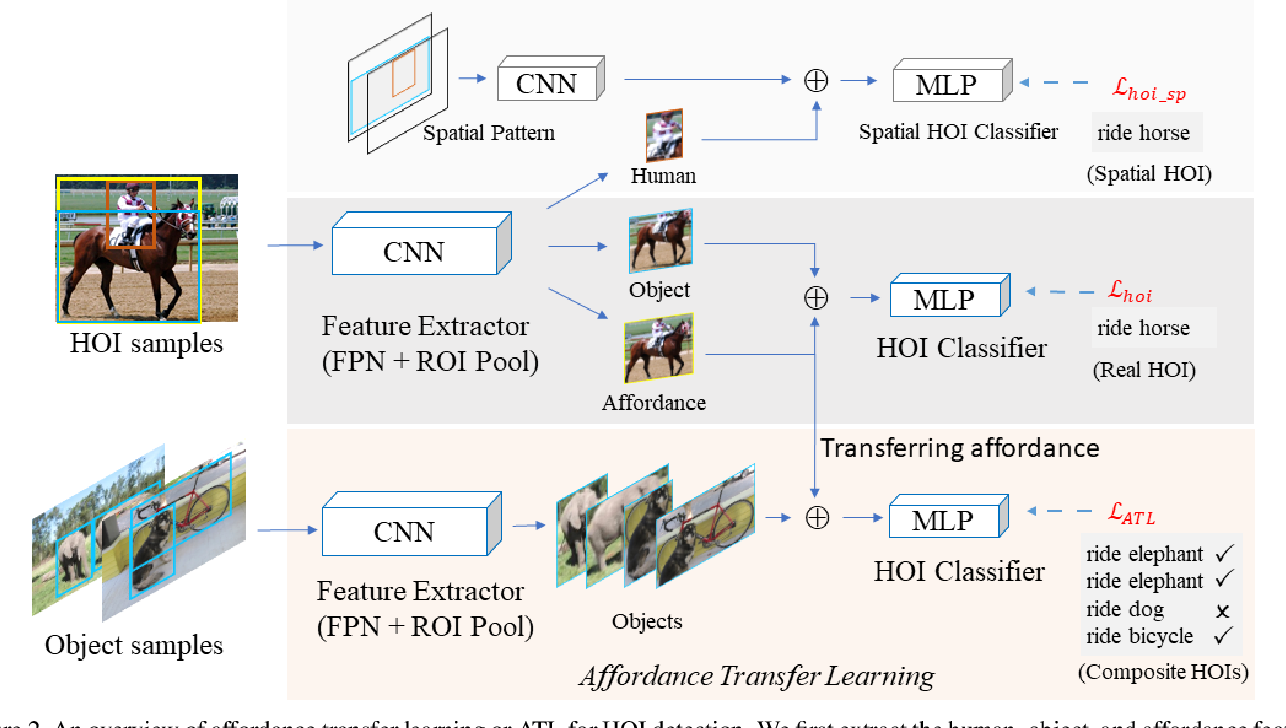 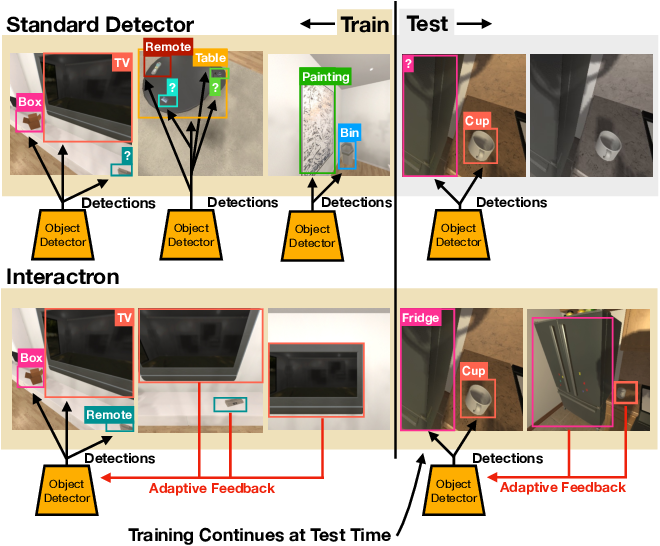 Over the years various methods have been proposed for the problem of object detection. Recently, we have witnessed great strides in this domain owing to the emergence of powerful deep neural networks. However, there are typically two main assumptions common among these approaches. First, the model is trained on a fixed training set and is evaluated on a pre-recorded test set. Second, the model is kept frozen after the training phase, so no further updates are performed after the training is finished. These two assumptions limit the applicability of these methods to real-world settings. In this paper, we propose Interactron, a method for adaptive object detection in an interactive setting, where the goal is to perform object detection in images observed by an embodied agent navigating in different environments. Our idea is to continue training during inference and adapt the model at test time without any explicit supervision via interacting with the environment. Our adaptive object detection model provides a 11.8 point improvement in AP (and 19.1 points in AP50) over DETR, a recent, high-performance object detector. Moreover, we show that our object detection model adapts to environments with completely different appearance characteristics, and its performance is on par with a model trained with full supervision for those environments.

Detect to Track and Track to Detect 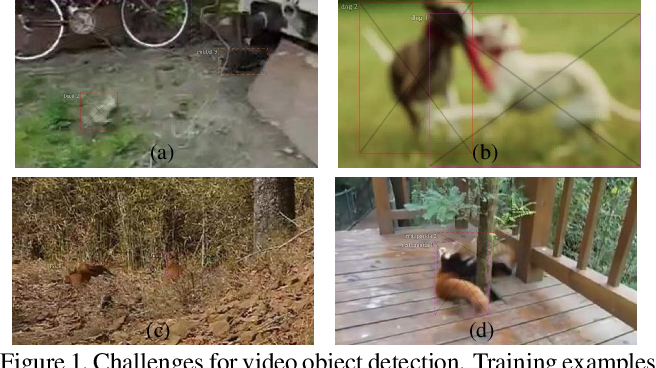 Recent approaches for high accuracy detection and tracking of object categories in video consist of complex multistage solutions that become more cumbersome each year. In this paper we propose a ConvNet architecture that jointly performs detection and tracking, solving the task in a simple and effective way. Our contributions are threefold: (i) we set up a ConvNet architecture for simultaneous detection and tracking, using a multi-task objective for frame-based object detection and across-frame track regression; (ii) we introduce correlation features that represent object co-occurrences across time to aid the ConvNet during tracking; and (iii) we link the frame level detections based on our across-frame tracklets to produce high accuracy detections at the video level. Our ConvNet architecture for spatiotemporal object detection is evaluated on the large-scale ImageNet VID dataset where it achieves state-of-the-art results. Our approach provides better single model performance than the winning method of the last ImageNet challenge while being conceptually much simpler. Finally, we show that by increasing the temporal stride we can dramatically increase the tracker speed. 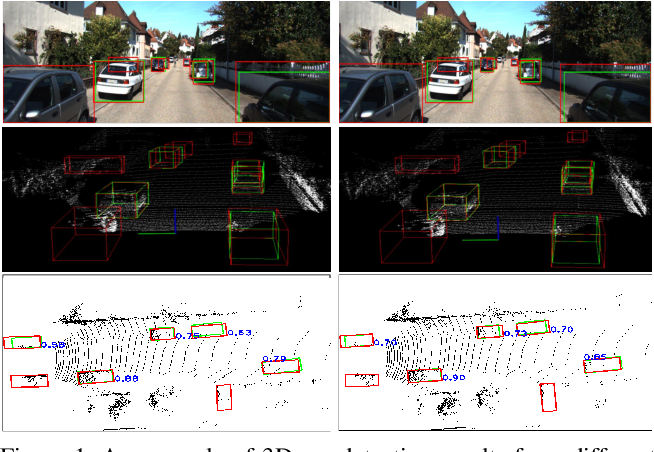 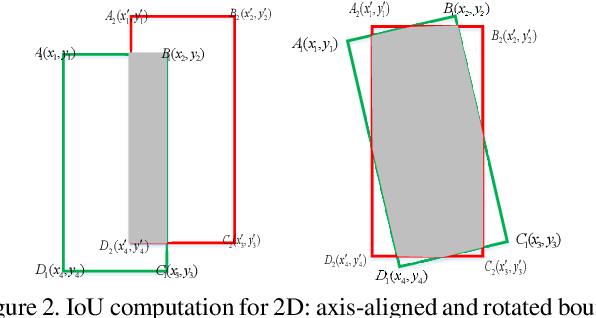 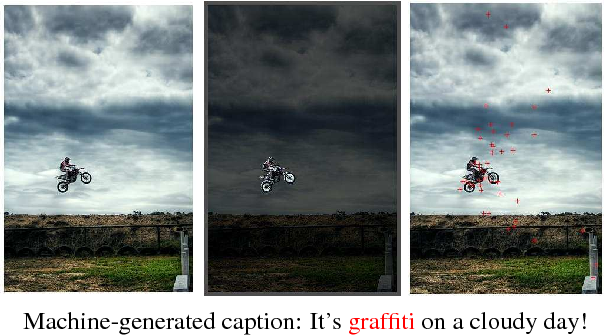 This manuscript introduces the problem of prominent object detection and recognition inspired by the fact that human seems to priorities perception of scene elements. The problem deals with finding the most important region of interest, segmenting the relevant item/object in that area, and assigning it an object class label. In other words, we are solving the three problems of saliency modeling, saliency detection, and object recognition under one umbrella. The motivation behind such a problem formulation is (1) the benefits to the knowledge representation-based vision pipelines, and (2) the potential improvements in emulating bio-inspired vision systems by solving these three problems together. We are foreseeing extending this problem formulation to fully semantically segmented scenes with instance object priority for high-level inferences in various applications including assistive vision. Along with a new problem definition, we also propose a method to achieve such a task. The proposed model predicts the most important area in the image, segments the associated objects, and labels them. The proposed problem and method are evaluated against human fixations, annotated segmentation masks, and object class categories. We define a chance level for each of the evaluation criterion to compare the proposed algorithm with. Despite the good performance of the proposed baseline, the overall evaluations indicate that the problem of prominent object detection and recognition is a challenging task that is still worth investigating further. 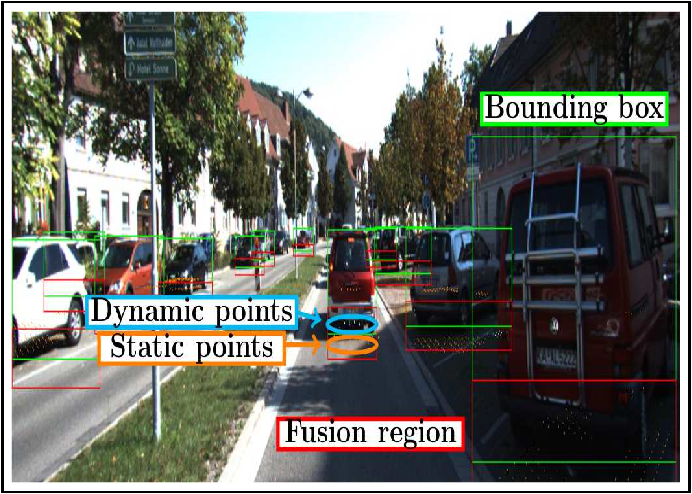 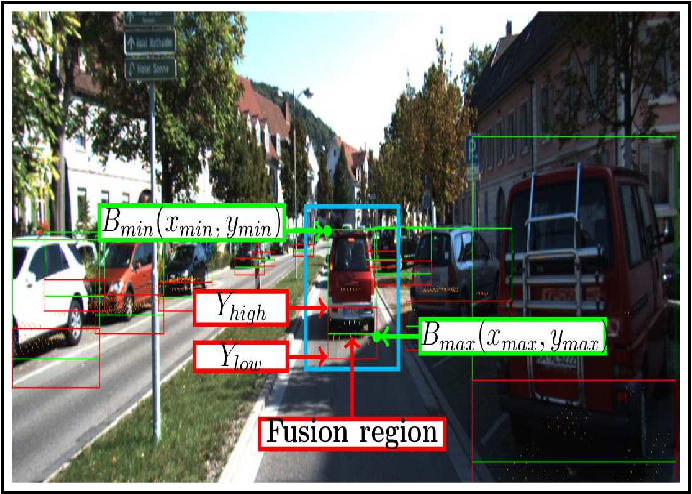 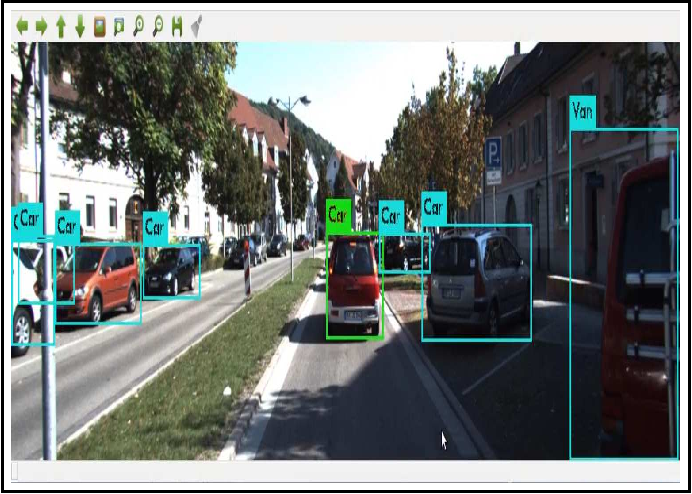 Object detection is a critical problem for the safe interaction between autonomous vehicles and road users. Deep-learning methodologies allowed the development of object detection approaches with better performance. However, there is still the challenge to obtain more characteristics from the objects detected in real-time. The main reason is that more information from the environment's objects can improve the autonomous vehicle capacity to face different urban situations. This paper proposes a new approach to detect static and dynamic objects in front of an autonomous vehicle. Our approach can also get other characteristics from the objects detected, like their position, velocity, and heading. We develop our proposal fusing results of the environment's interpretations achieved of YoloV3 and a Bayesian filter. To demonstrate our proposal's performance, we asses it through a benchmark dataset and real-world data obtained from an autonomous platform. We compared the results achieved with another approach.

Soft-NMS -- Improving Object Detection With One Line of Code 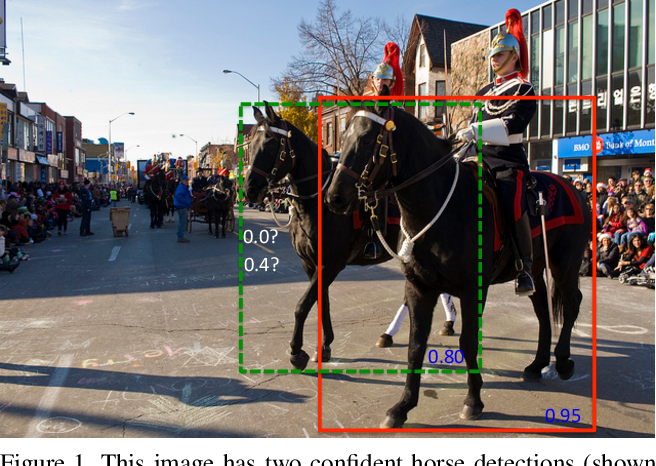 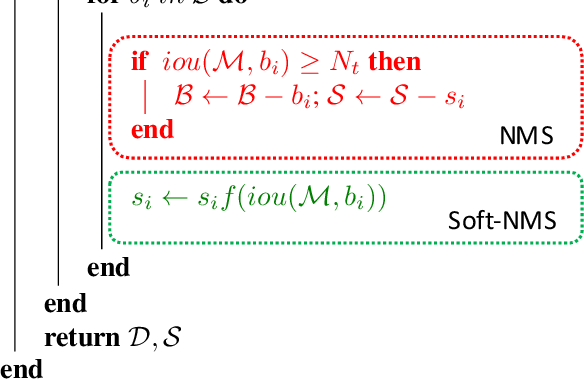 Non-maximum suppression is an integral part of the object detection pipeline. First, it sorts all detection boxes on the basis of their scores. The detection box M with the maximum score is selected and all other detection boxes with a significant overlap (using a pre-defined threshold) with M are suppressed. This process is recursively applied on the remaining boxes. As per the design of the algorithm, if an object lies within the predefined overlap threshold, it leads to a miss. To this end, we propose Soft-NMS, an algorithm which decays the detection scores of all other objects as a continuous function of their overlap with M. Hence, no object is eliminated in this process. Soft-NMS obtains consistent improvements for the coco-style mAP metric on standard datasets like PASCAL VOC 2007 (1.7% for both R-FCN and Faster-RCNN) and MS-COCO (1.3% for R-FCN and 1.1% for Faster-RCNN) by just changing the NMS algorithm without any additional hyper-parameters. Using Deformable-RFCN, Soft-NMS improves state-of-the-art in object detection from 39.8% to 40.9% with a single model. Further, the computational complexity of Soft-NMS is the same as traditional NMS and hence it can be efficiently implemented. Since Soft-NMS does not require any extra training and is simple to implement, it can be easily integrated into any object detection pipeline. Code for Soft-NMS is publicly available on GitHub (http://bit.ly/2nJLNMu). 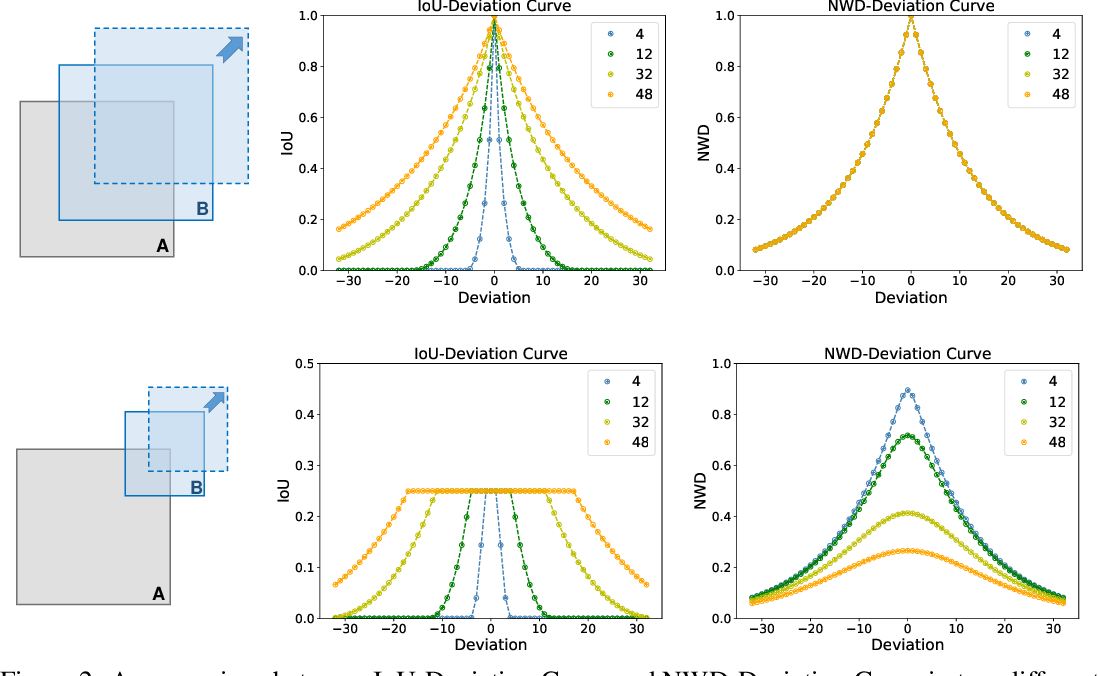 Detecting tiny objects is a very challenging problem since a tiny object only contains a few pixels in size. We demonstrate that state-of-the-art detectors do not produce satisfactory results on tiny objects due to the lack of appearance information. Our key observation is that Intersection over Union (IoU) based metrics such as IoU itself and its extensions are very sensitive to the location deviation of the tiny objects, and drastically deteriorate the detection performance when used in anchor-based detectors. To alleviate this, we propose a new evaluation metric using Wasserstein distance for tiny object detection. Specifically, we first model the bounding boxes as 2D Gaussian distributions and then propose a new metric dubbed Normalized Wasserstein Distance (NWD) to compute the similarity between them by their corresponding Gaussian distributions. The proposed NWD metric can be easily embedded into the assignment, non-maximum suppression, and loss function of any anchor-based detector to replace the commonly used IoU metric. We evaluate our metric on a new dataset for tiny object detection (AI-TOD) in which the average object size is much smaller than existing object detection datasets. Extensive experiments show that, when equipped with NWD metric, our approach yields performance that is 6.7 AP points higher than a standard fine-tuning baseline, and 6.0 AP points higher than state-of-the-art competitors. 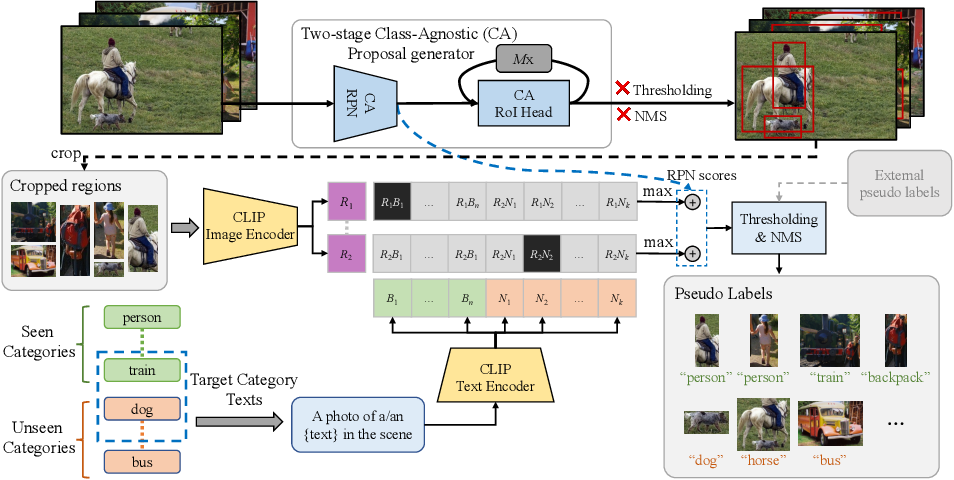 Building robust and generic object detection frameworks requires scaling to larger label spaces and bigger training datasets. However, it is prohibitively costly to acquire annotations for thousands of categories at a large scale. We propose a novel method that leverages the rich semantics available in recent vision and language models to localize and classify objects in unlabeled images, effectively generating pseudo labels for object detection. Starting with a generic and class-agnostic region proposal mechanism, we use vision and language models to categorize each region of an image into any object category that is required for downstream tasks. We demonstrate the value of the generated pseudo labels in two specific tasks, open-vocabulary detection, where a model needs to generalize to unseen object categories, and semi-supervised object detection, where additional unlabeled images can be used to improve the model. Our empirical evaluation shows the effectiveness of the pseudo labels in both tasks, where we outperform competitive baselines and achieve a novel state-of-the-art for open-vocabulary object detection. Our code is available at https://github.com/xiaofeng94/VL-PLM.


* Accepted to ECCV 2022 (with the supplementary document)