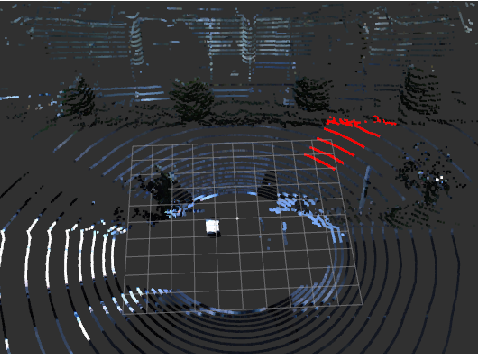 Lidar based 3D object detection and classification tasks are essential for automated driving(AD). A Lidar sensor can provide the 3D point coud data reconstruction of the surrounding environment. But the detection in 3D point cloud still needs a strong algorithmic challenge. This paper consists of three parts.(1)Lidar-camera calib. (2)YOLO, based detection and PointCloud extraction, (3) k-means based point cloud segmentation. In our research, Camera can capture the image to make the Real-time 2D Object Detection by using YOLO, I transfer the bounding box to node whose function is making 3d object detection on point cloud data from Lidar. By comparing whether 2D coordinate transferred from the 3D point is in the object bounding box or not, and doing a k-means clustering can achieve High-speed 3D object recognition function in GPU.

Object Detection in 20 Years: A Survey 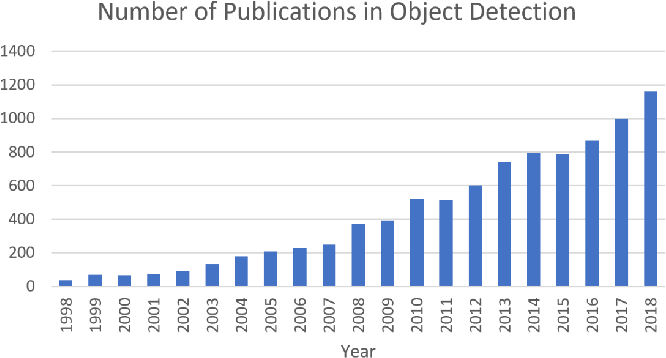 Object detection, as of one the most fundamental and challenging problems in computer vision, has received great attention in recent years. Its development in the past two decades can be regarded as an epitome of computer vision history. If we think of today's object detection as a technical aesthetics under the power of deep learning, then turning back the clock 20 years we would witness the wisdom of cold weapon era. This paper extensively reviews 400+ papers of object detection in the light of its technical evolution, spanning over a quarter-century's time (from the 1990s to 2019). A number of topics have been covered in this paper, including the milestone detectors in history, detection datasets, metrics, fundamental building blocks of the detection system, speed up techniques, and the recent state of the art detection methods. This paper also reviews some important detection applications, such as pedestrian detection, face detection, text detection, etc, and makes an in-deep analysis of their challenges as well as technical improvements in recent years. 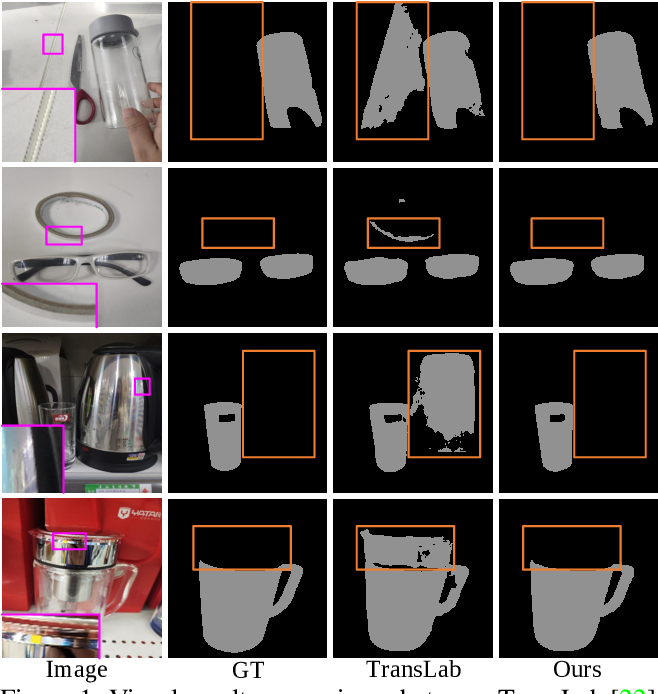 Detecting transparent objects in natural scenes is challenging due to the low contrast in texture, brightness and colors. Recent deep-learning-based works reveal that it is effective to leverage boundaries for transparent object detection (TOD). However, these methods usually encounter boundary-related imbalance problem, leading to limited generation capability. Detailly, a kind of boundaries in the background, which share the same characteristics with boundaries of transparent objects but have much smaller amounts, usually hurt the performance. To conquer the boundary-related imbalance problem, we propose a novel content-dependent data augmentation method termed FakeMix. Considering collecting these trouble-maker boundaries in the background is hard without corresponding annotations, we elaborately generate them by appending the boundaries of transparent objects from other samples into the current image during training, which adjusts the data space and improves the generalization of the models. Further, we present AdaptiveASPP, an enhanced version of ASPP, that can capture multi-scale and cross-modality features dynamically. Extensive experiments demonstrate that our methods clearly outperform the state-of-the-art methods. We also show that our approach can also transfer well on related tasks, in which the model meets similar troubles, such as mirror detection, glass detection, and camouflaged object detection. Code will be made publicly available. 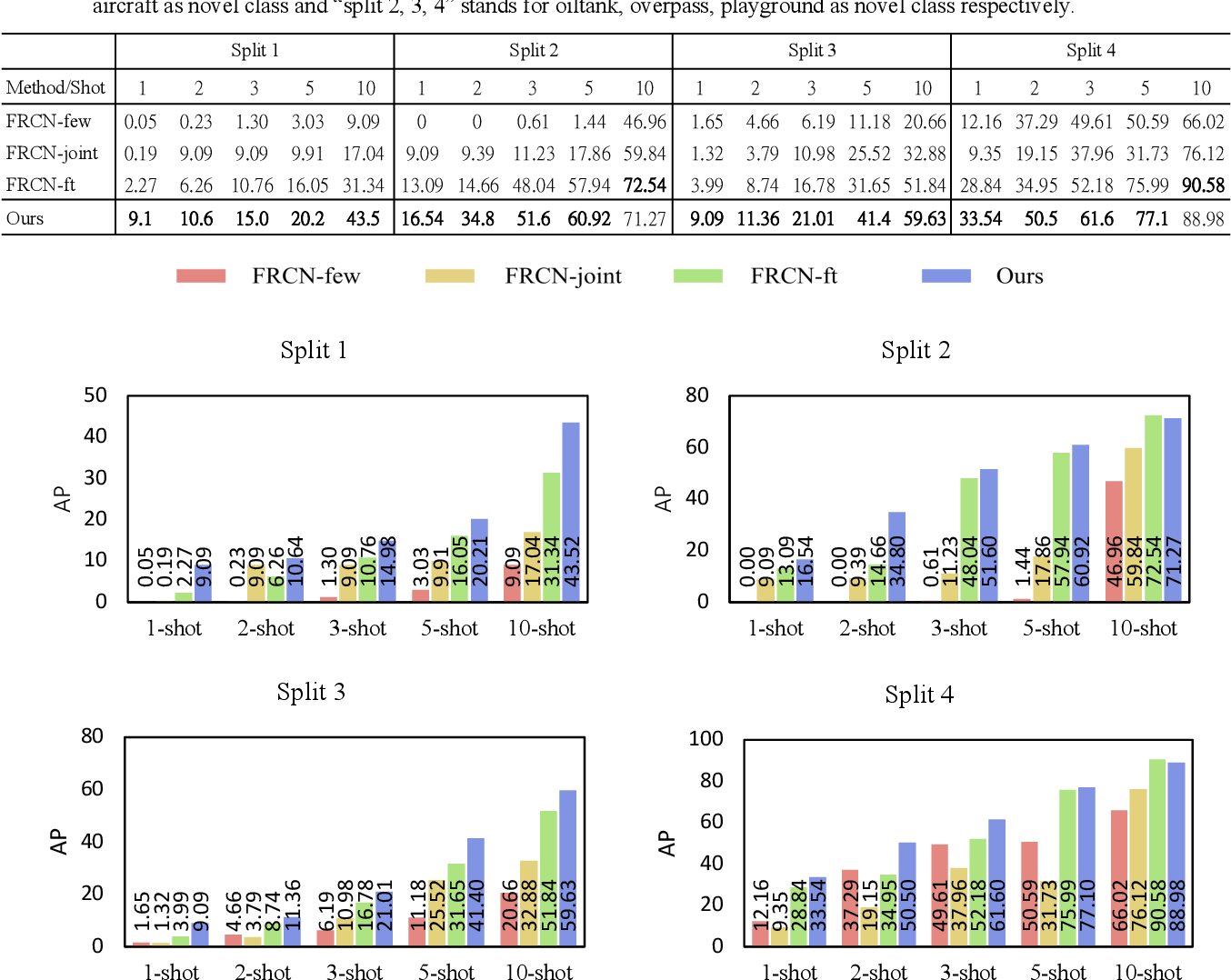 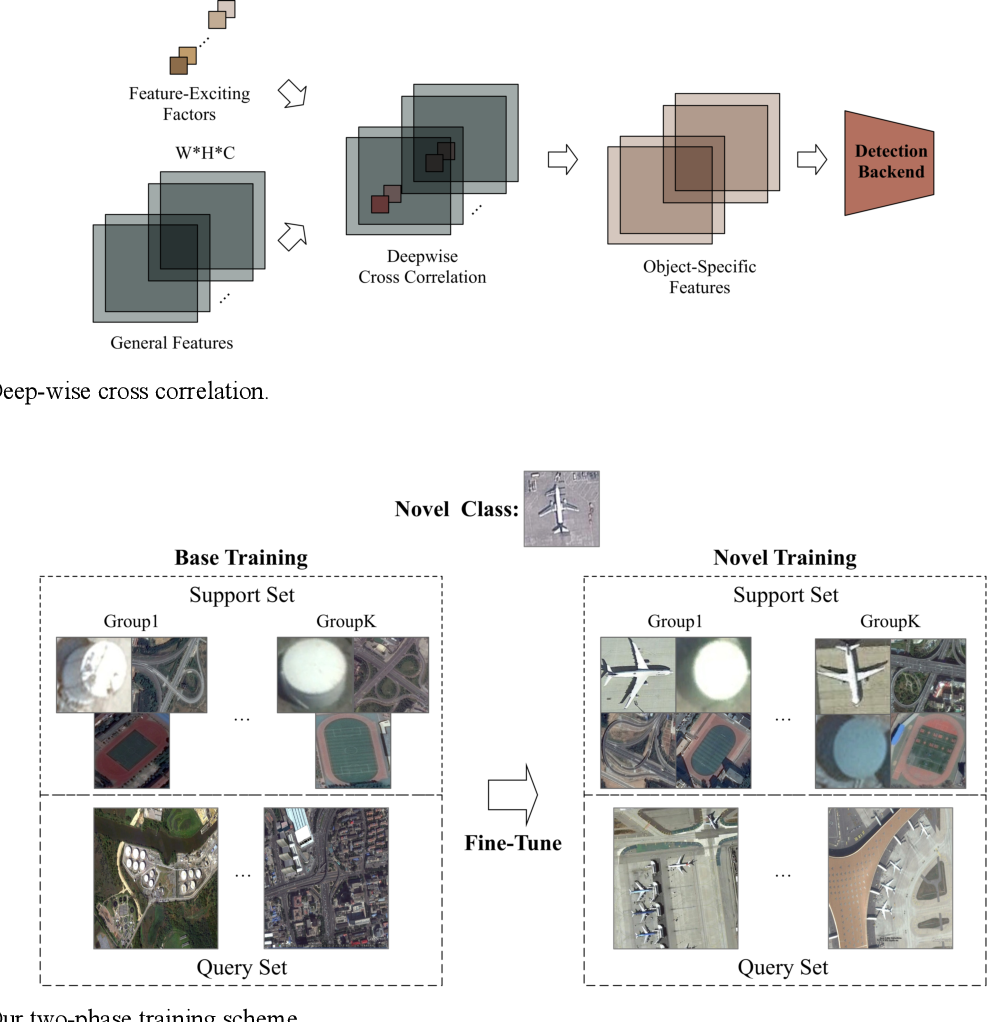 In recent years, there are many applications of object detection in remote sensing field, which demands a great number of labeled data. However, in many cases, data is extremely rare. In this paper, we proposed a few-shot object detector which is designed for detecting novel objects based on only a few examples. Through fully leveraging labeled base classes, our model that is composed of a feature-extractor, a feature attention highlight module as well as a two-stage detection backend can quickly adapt to novel classes. The pre-trained feature extractor whose parameters are shared produces general features. While the feature attention highlight module is designed to be light-weighted and simple in order to fit the few-shot cases. Although it is simple, the information provided by it in a serial way is helpful to make the general features to be specific for few-shot objects. Then the object-specific features are delivered to the two-stage detection backend for the detection results. The experiments demonstrate the effectiveness of the proposed method for few-shot cases. 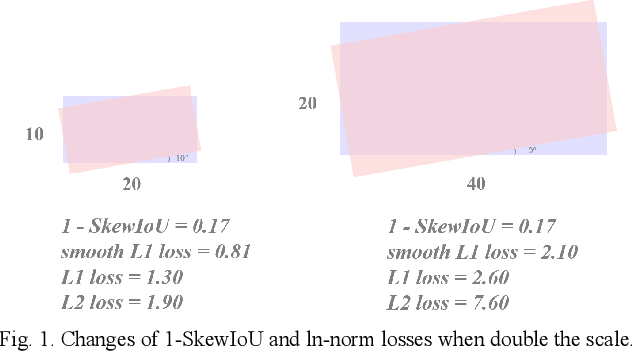 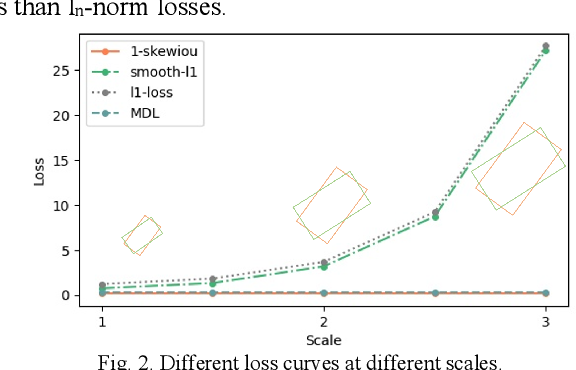 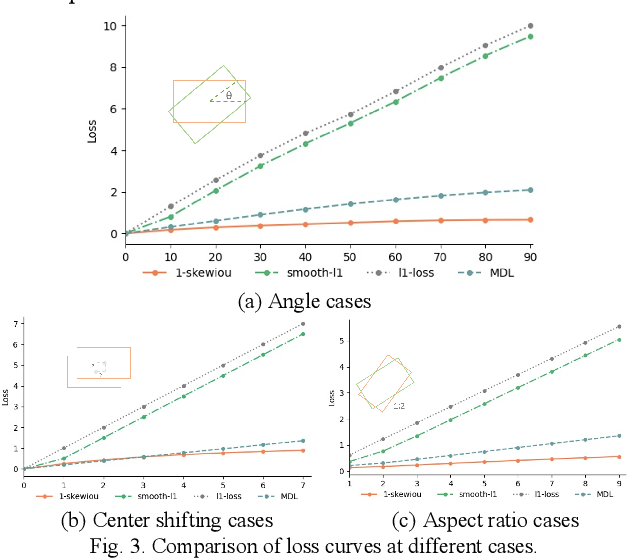 Rotated object detection in aerial images is a meaningful yet challenging task as objects are densely arranged and have arbitrary orientations. The eight-parameter (coordinates of box vectors) methods in rotated object detection usually use ln-norm losses (L1 loss, L2 loss, and smooth L1 loss) as loss functions. As ln-norm losses are mainly based on non-scale-invariant Minkowski distance, using ln-norm losses will lead to inconsistency with the detection metric rotational Intersection-over-Union (IoU) and training instability. To address the problems, we use Mahalanobis distance to calculate loss between the predicted and the target box vertices' vectors, proposing a new loss function called Mahalanobis Distance Loss (MDL) for eight-parameter rotated object detection. As Mahalanobis distance is scale-invariant, MDL is more consistent with detection metric and more stable during training than ln-norm losses. To alleviate the problem of boundary discontinuity like all other eight-parameter methods, we further take the minimum loss value to make MDL continuous at boundary cases. We achieve state-of-art performance on DOTA-v1.0 with the proposed method MDL. Furthermore, compared to the experiment that uses smooth L1 loss, we find that MDL performs better in rotated object detection. 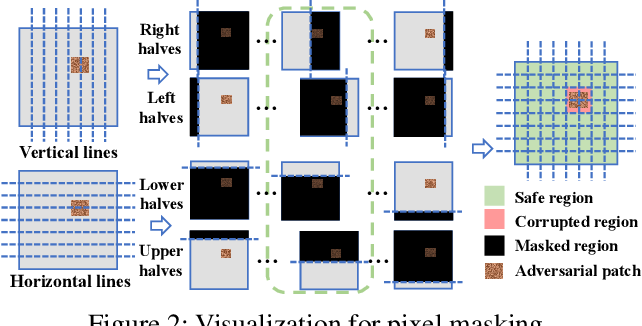 Object detectors, which are widely deployed in security-critical systems such as autonomous vehicles, have been found vulnerable to physical-world patch hiding attacks. The attacker can use a single physically-realizable adversarial patch to make the object detector miss the detection of victim objects and completely undermines the functionality of object detection applications. In this paper, we propose ObjectSeeker as a defense framework for building certifiably robust object detectors against patch hiding attacks. The core operation of ObjectSeeker is patch-agnostic masking: we aim to mask out the entire adversarial patch without any prior knowledge of the shape, size, and location of the patch. This masking operation neutralizes the adversarial effect and allows any vanilla object detector to safely detect objects on the masked images. Remarkably, we develop a certification procedure to determine if ObjectSeeker can detect certain objects with a provable guarantee against any adaptive attacker within the threat model. Our evaluation with two object detectors and three datasets demonstrates a significant (~10%-40% absolute and ~2-6x relative) improvement in certified robustness over the prior work, as well as high clean performance (~1% performance drop compared with vanilla undefended models).

Analysis and Adaptation of YOLOv4 for Object Detection in Aerial Images 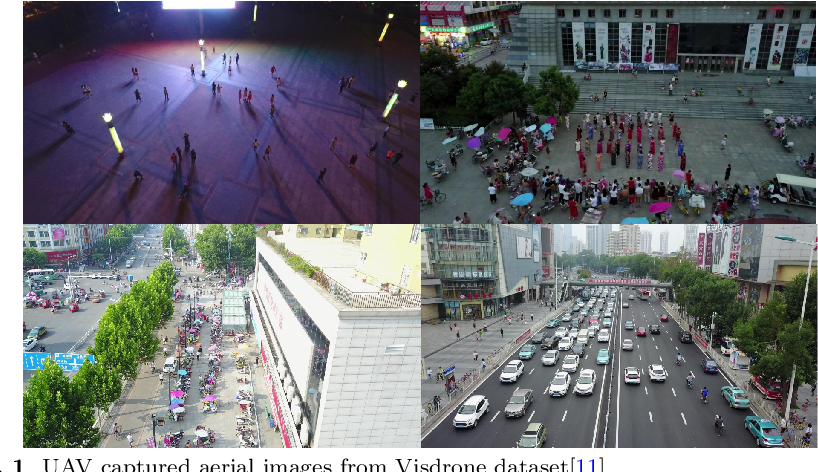 The recent and rapid growth in Unmanned Aerial Vehicles (UAVs) deployment for various computer vision tasks has paved the path for numerous opportunities to make them more effective and valuable. Object detection in aerial images is challenging due to variations in appearance, pose, and scale. Autonomous aerial flight systems with their inherited limited memory and computational power demand accurate and computationally efficient detection algorithms for real-time applications. Our work shows the adaptation of the popular YOLOv4 framework for predicting the objects and their locations in aerial images with high accuracy and inference speed. We utilized transfer learning for faster convergence of the model on the VisDrone DET aerial object detection dataset. The trained model resulted in a mean average precision (mAP) of 45.64% with an inference speed reaching 8.7 FPS on the Tesla K80 GPU and was highly accurate in detecting truncated and occluded objects. We experimentally evaluated the impact of varying network resolution sizes and training epochs on the performance. A comparative study with several contemporary aerial object detectors proved that YOLOv4 performed better, implying a more suitable detection algorithm to incorporate on aerial platforms. 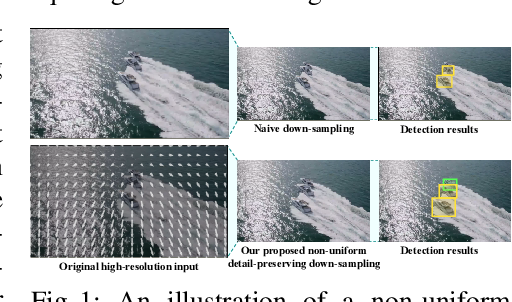 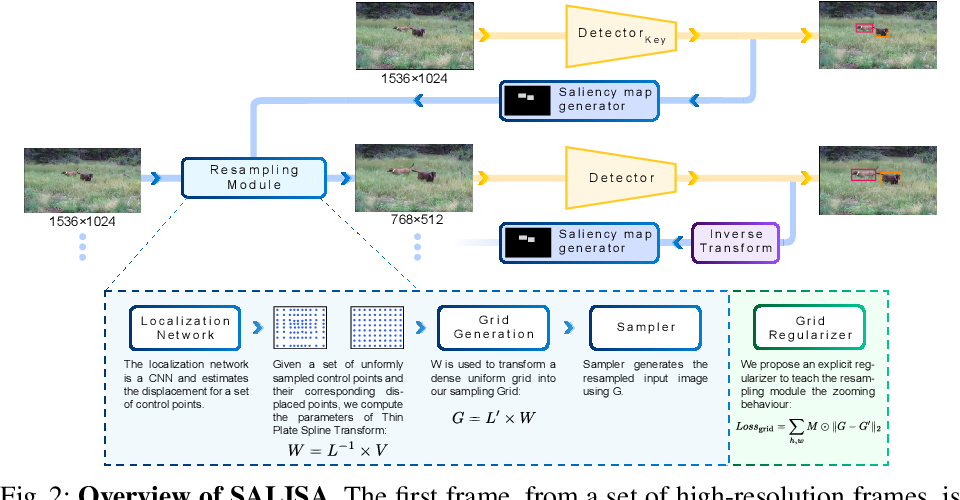 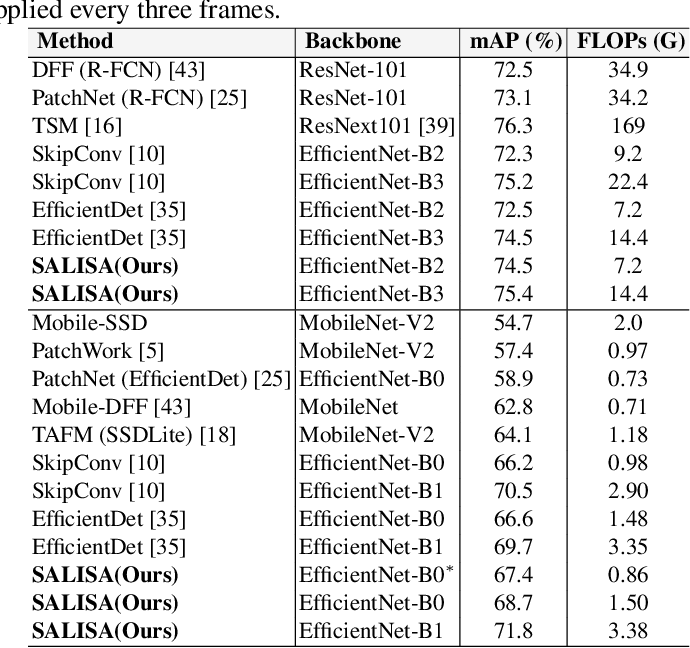 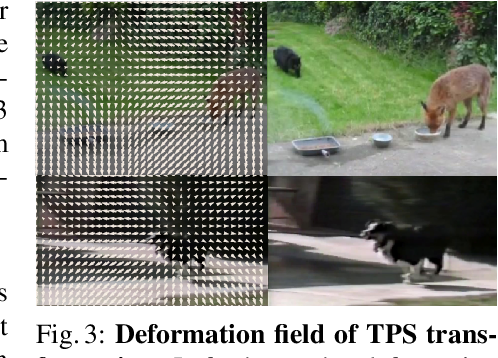 High-resolution images are widely adopted for high-performance object detection in videos. However, processing high-resolution inputs comes with high computation costs, and naive down-sampling of the input to reduce the computation costs quickly degrades the detection performance. In this paper, we propose SALISA, a novel non-uniform SALiency-based Input SAmpling technique for video object detection that allows for heavy down-sampling of unimportant background regions while preserving the fine-grained details of a high-resolution image. The resulting image is spatially smaller, leading to reduced computational costs while enabling a performance comparable to a high-resolution input. To achieve this, we propose a differentiable resampling module based on a thin plate spline spatial transformer network (TPS-STN). This module is regularized by a novel loss to provide an explicit supervision signal to learn to "magnify" salient regions. We report state-of-the-art results in the low compute regime on the ImageNet-VID and UA-DETRAC video object detection datasets. We demonstrate that on both datasets, the mAP of an EfficientDet-D1 (EfficientDet-D2) gets on par with EfficientDet-D2 (EfficientDet-D3) at a much lower computational cost. We also show that SALISA significantly improves the detection of small objects. In particular, SALISA with an EfficientDet-D1 detector improves the detection of small objects by $77\%$, and remarkably also outperforms EfficientDetD3 baseline. 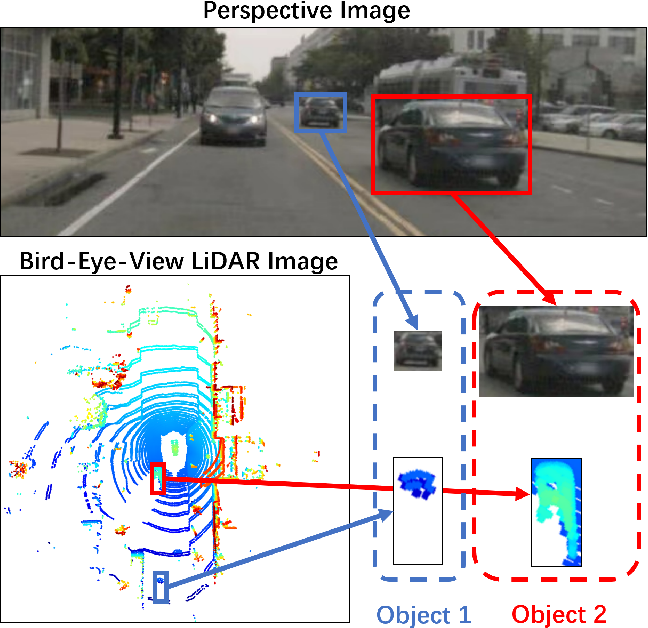 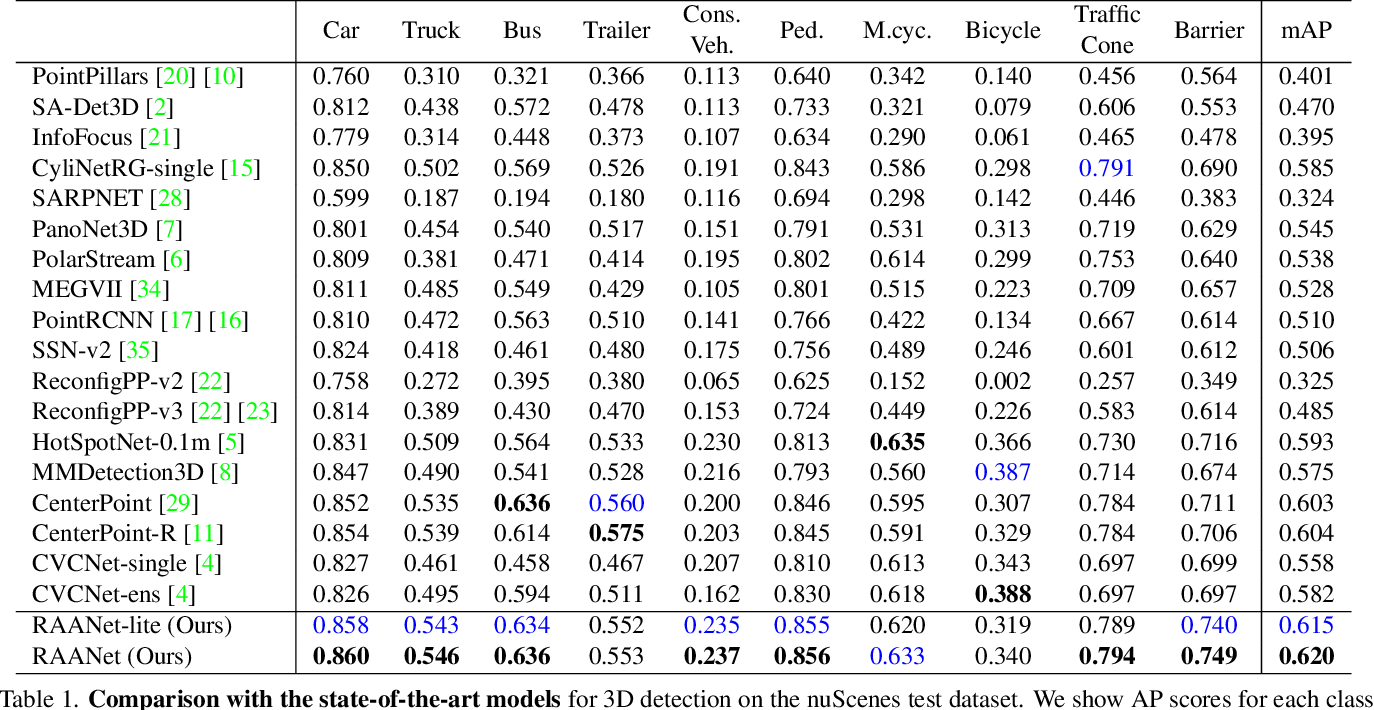 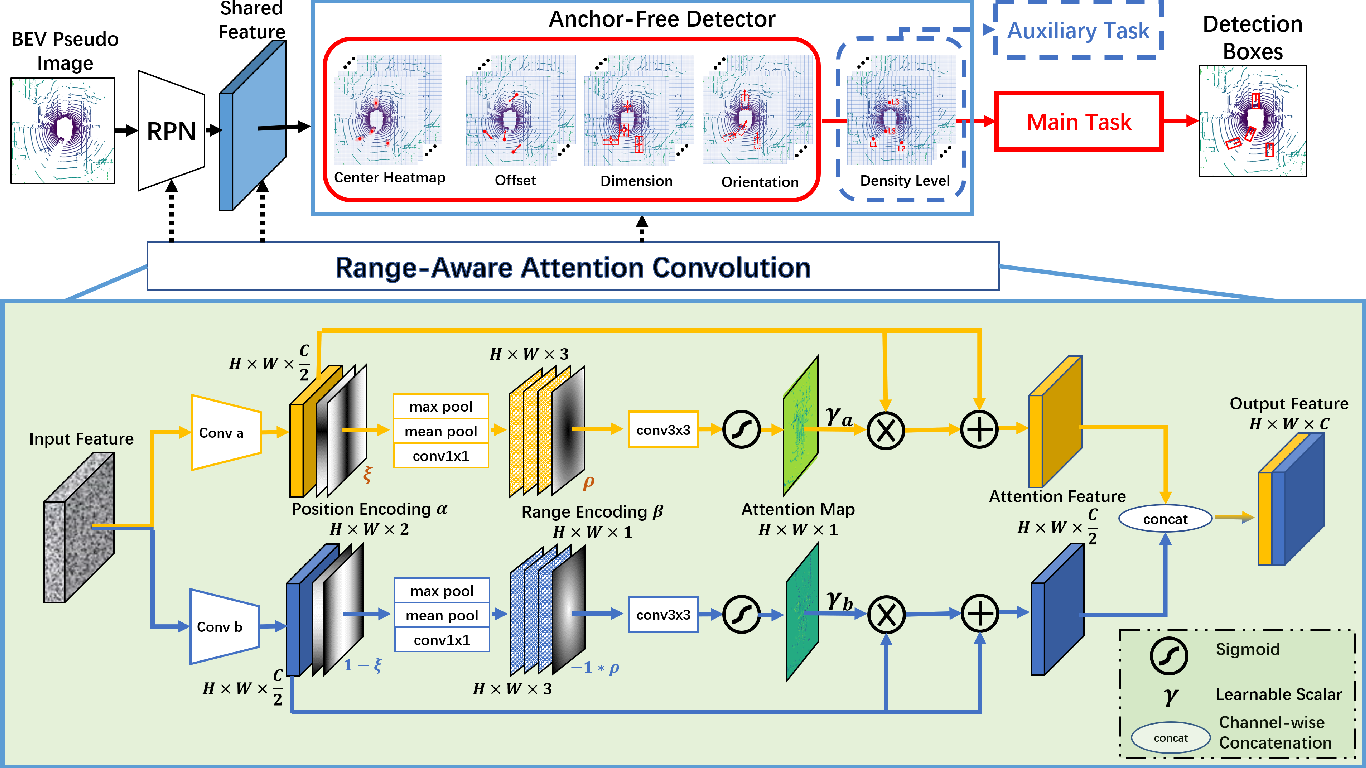 3D object detection from LiDAR data for autonomous driving has been making remarkable strides in recent years. Among the state-of-the-art methodologies, encoding point clouds into a bird's-eye view (BEV) has been demonstrated to be both effective and efficient. Different from perspective views, BEV preserves rich spatial and distance information between objects; and while farther objects of the same type do not appear smaller in the BEV, they contain sparser point cloud features. This fact weakens BEV feature extraction using shared-weight convolutional neural networks. In order to address this challenge, we propose Range-Aware Attention Network (RAANet), which extracts more powerful BEV features and generates superior 3D object detections. The range-aware attention (RAA) convolutions significantly improve feature extraction for near as well as far objects. Moreover, we propose a novel auxiliary loss for density estimation to further enhance the detection accuracy of RAANet for occluded objects. It is worth to note that our proposed RAA convolution is lightweight and compatible to be integrated into any CNN architecture used for the BEV detection. Extensive experiments on the nuScenes dataset demonstrate that our proposed approach outperforms the state-of-the-art methods for LiDAR-based 3D object detection, with real-time inference speed of 16 Hz for the full version and 22 Hz for the lite version. The code is publicly available at an anonymous Github repository https://github.com/anonymous0522/RAAN. 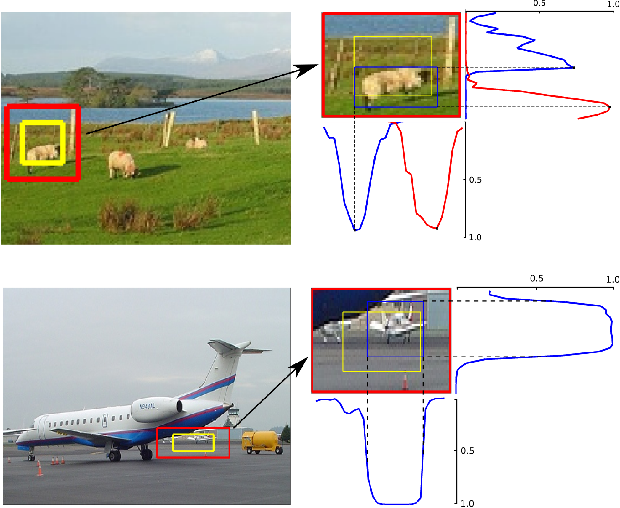 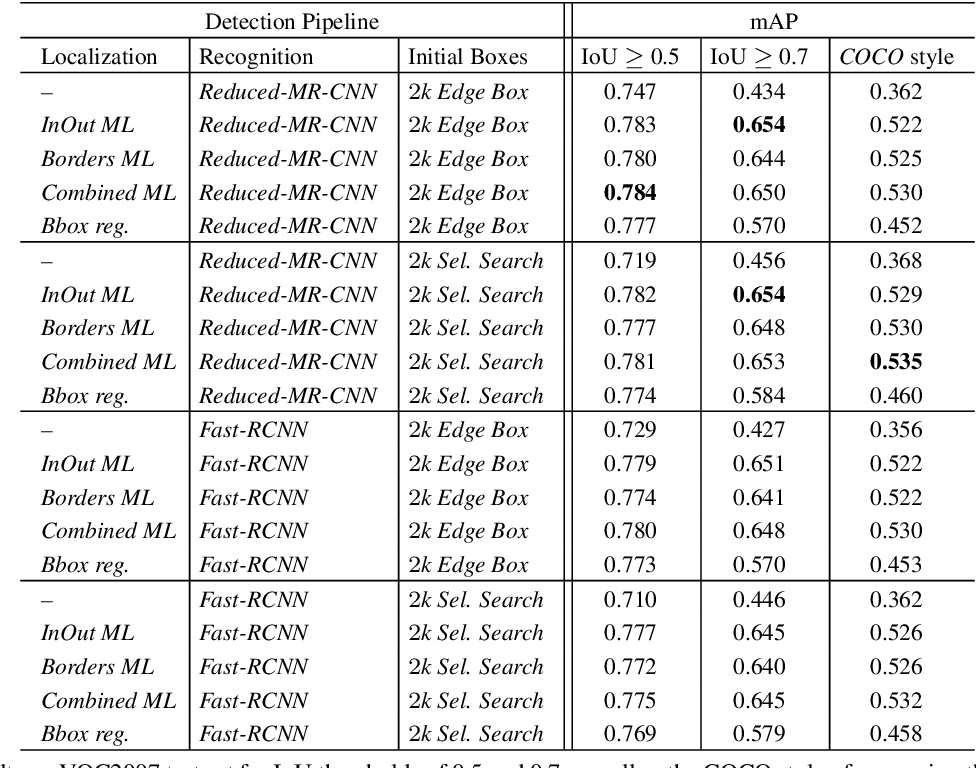 We propose a novel object localization methodology with the purpose of boosting the localization accuracy of state-of-the-art object detection systems. Our model, given a search region, aims at returning the bounding box of an object of interest inside this region. To accomplish its goal, it relies on assigning conditional probabilities to each row and column of this region, where these probabilities provide useful information regarding the location of the boundaries of the object inside the search region and allow the accurate inference of the object bounding box under a simple probabilistic framework. For implementing our localization model, we make use of a convolutional neural network architecture that is properly adapted for this task, called LocNet. We show experimentally that LocNet achieves a very significant improvement on the mAP for high IoU thresholds on PASCAL VOC2007 test set and that it can be very easily coupled with recent state-of-the-art object detection systems, helping them to boost their performance. Finally, we demonstrate that our detection approach can achieve high detection accuracy even when it is given as input a set of sliding windows, thus proving that it is independent of box proposal methods.