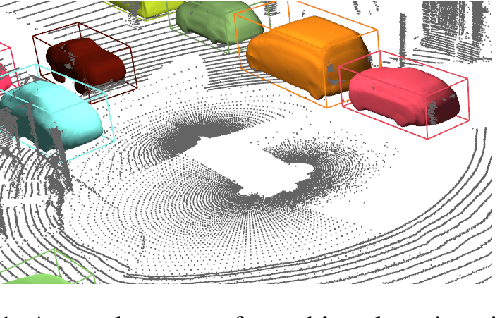 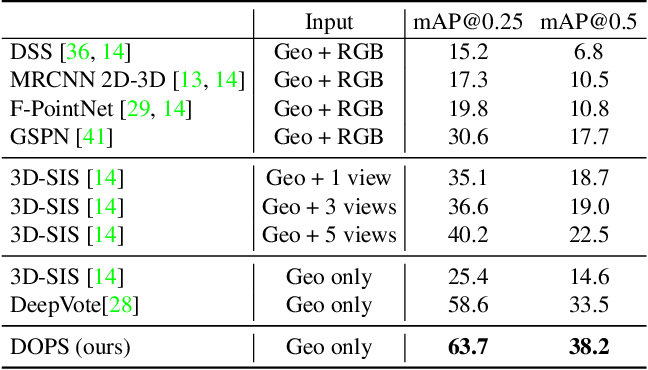 Most object detection frameworks use backbone architectures originally designed for image classification, conventionally with pre-trained parameters on ImageNet. However, image classification and object detection are essentially different tasks and there is no guarantee that the optimal backbone for classification is also optimal for object detection. Recent neural architecture search (NAS) research has demonstrated that automatically designing a backbone specifically for object detection helps improve the overall accuracy. In this paper, we introduce a neural architecture adaptation method that can optimize the given backbone for detection purposes, while still allowing the use of pre-trained parameters. We propose to adapt both the micro- and macro-architecture by searching for specific operations and the number of layers, in addition to the output channel dimensions of each block. It is important to find the optimal channel depth, as it greatly affects the feature representation capability and computation cost. We conduct experiments with our searched backbone for object detection and demonstrate that our backbone outperforms both manually designed and searched state-of-the-art backbones on the COCO dataset.

A novel, adaptive ground-aware, and cost-effective 3D Object Detection pipeline is proposed. The ground surface representation introduced in this paper, in comparison to its uni-planar counterparts (methods that model the surface of a whole 3D scene using single plane), is far more accurate while being ~10x faster. The novelty of the ground representation lies both in the way in which the ground surface of the scene is represented in Lidar perception problems, as well as in the (cost-efficient) way in which it is computed. Furthermore, the proposed object detection pipeline builds on the traditional two-stage object detection models by incorporating the ability to dynamically reason the surface of the scene, ultimately achieving a new state-of-the-art 3D object detection performance among the two-stage Lidar Object Detection pipelines. 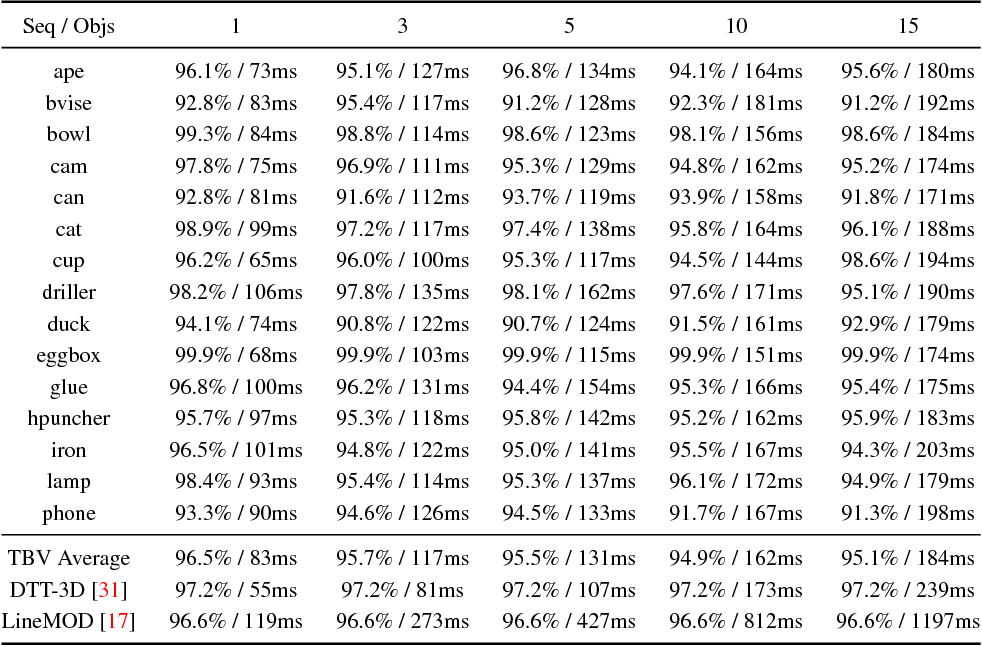 We present a scalable method for detecting objects and estimating their 3D poses in RGB-D data. To this end, we rely on an efficient representation of object views and employ hashing techniques to match these views against the input frame in a scalable way. While a similar approach already exists for 2D detection, we show how to extend it to estimate the 3D pose of the detected objects. In particular, we explore different hashing strategies and identify the one which is more suitable to our problem. We show empirically that the complexity of our method is sublinear with the number of objects and we enable detection and pose estimation of many 3D objects with high accuracy while outperforming the state-of-the-art in terms of runtime. 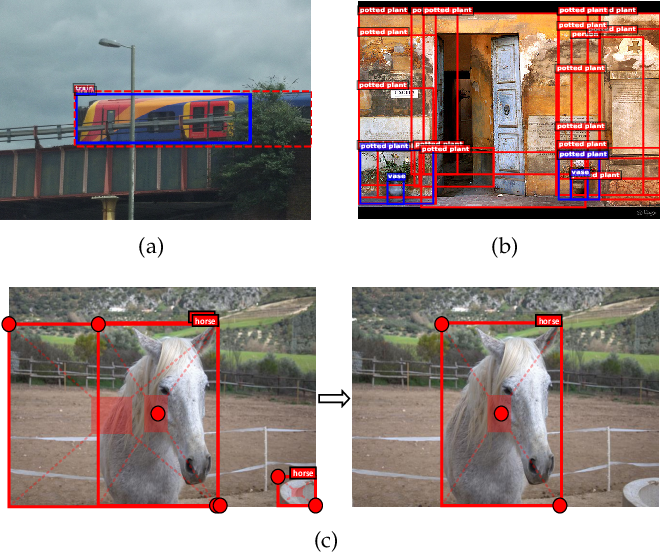 There are two mainstreams for object detection: top-down and bottom-up. The state-of-the-art approaches mostly belong to the first category. In this paper, we demonstrate that the bottom-up approaches are as competitive as the top-down and enjoy higher recall. Our approach, named CenterNet, detects each object as a triplet keypoints (top-left and bottom-right corners and the center keypoint). We firstly group the corners by some designed cues and further confirm the objects by the center keypoints. The corner keypoints equip the approach with the ability to detect objects of various scales and shapes and the center keypoint avoids the confusion brought by a large number of false-positive proposals. Our approach is a kind of anchor-free detector because it does not need to define explicit anchor boxes. We adapt our approach to the backbones with different structures, i.e., the 'hourglass' like networks and the the 'pyramid' like networks, which detect objects on a single-resolution feature map and multi-resolution feature maps, respectively. On the MS-COCO dataset, CenterNet with Res2Net-101 and Swin-Transformer achieves APs of 53.7% and 57.1%, respectively, outperforming all existing bottom-up detectors and achieving state-of-the-art. We also design a real-time CenterNet, which achieves a good trade-off between accuracy and speed with an AP of 43.6% at 30.5 FPS. https://github.com/Duankaiwen/PyCenterNet.

Detecting and Tracking Small and Dense Moving Objects in Satellite Videos: A Benchmark 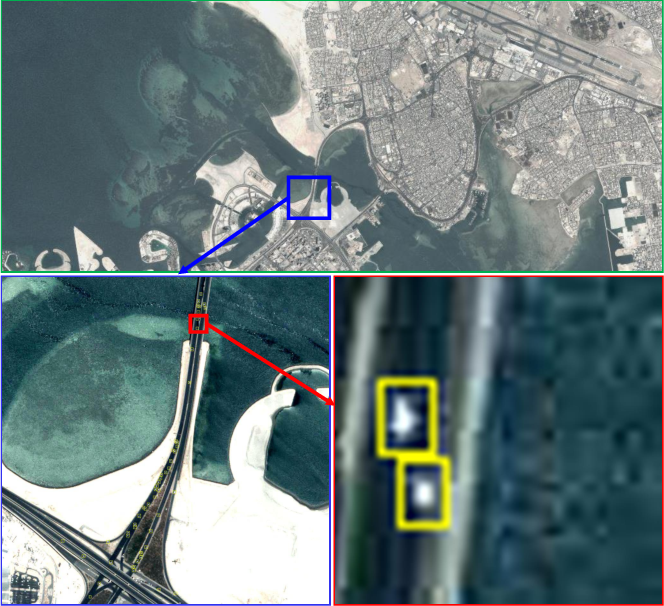 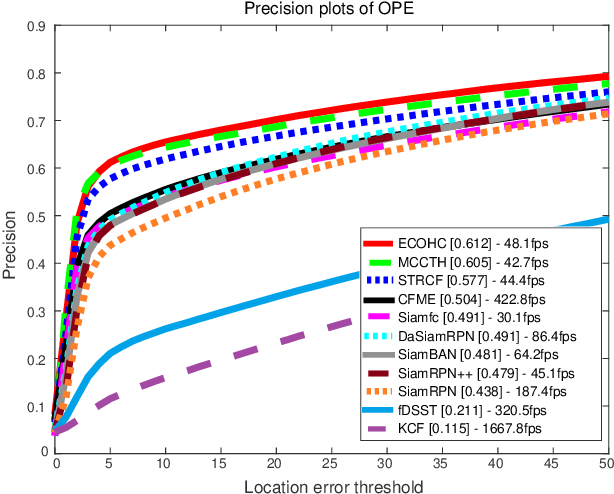 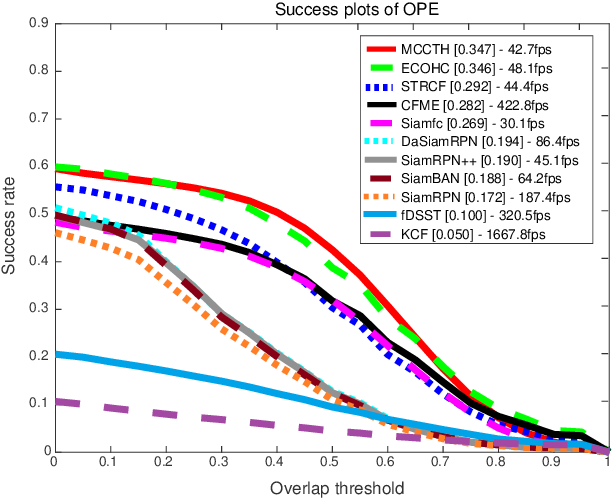 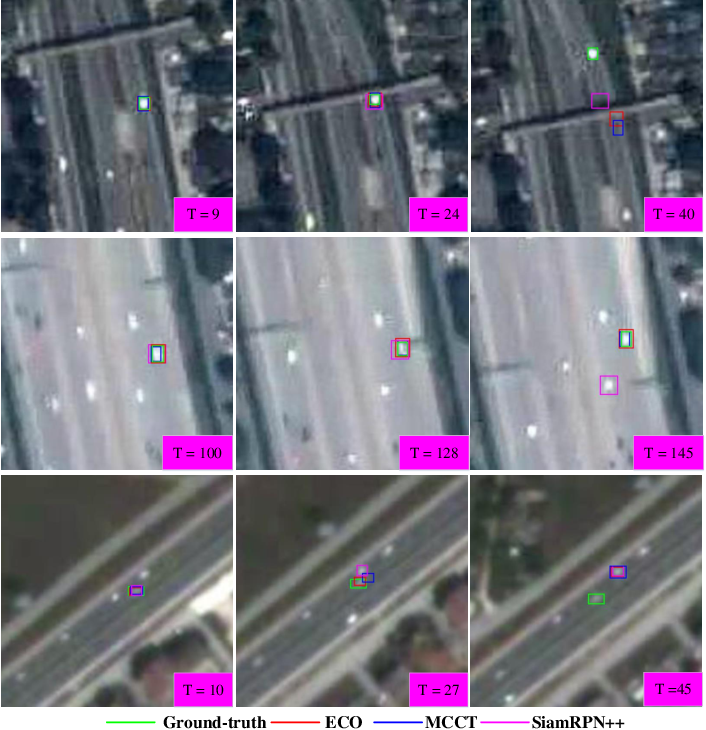 Satellite video cameras can provide continuous observation for a large-scale area, which is important for many remote sensing applications. However, achieving moving object detection and tracking in satellite videos remains challenging due to the insufficient appearance information of objects and lack of high-quality datasets. In this paper, we first build a large-scale satellite video dataset with rich annotations for the task of moving object detection and tracking. This dataset is collected by the Jilin-1 satellite constellation and composed of 47 high-quality videos with 1,646,038 instances of interest for object detection and 3,711 trajectories for object tracking. We then introduce a motion modeling baseline to improve the detection rate and reduce false alarms based on accumulative multi-frame differencing and robust matrix completion. Finally, we establish the first public benchmark for moving object detection and tracking in satellite videos, and extensively evaluate the performance of several representative approaches on our dataset. Comprehensive experimental analyses and insightful conclusions are also provided. The dataset is available at https://github.com/QingyongHu/VISO.


* This paper has been accepted by IEEE Transactions on Geoscience and Remote Sensing. Qian Yin and Qingyong Hu have equal contributions to this work and are co-first authors. The dataset is available at https://github.com/QingyongHu/VISO

Reliable Multi-Object Tracking in the Presence of Unreliable Detections 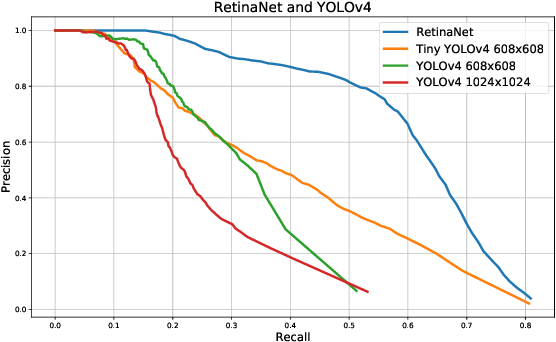 Recent multi-object tracking (MOT) systems have leveraged highly accurate object detectors; however, training such detectors requires large amounts of labeled data. Although such data is widely available for humans and vehicles, it is significantly more scarce for other animal species. We present Robust Confidence Tracking (RCT), an algorithm designed to maintain robust performance even when detection quality is poor. In contrast to prior methods which discard detection confidence information, RCT takes a fundamentally different approach, relying on the exact detection confidence values to initialize tracks, extend tracks, and filter tracks. In particular, RCT is able to minimize identity switches by efficiently using low-confidence detections (along with a single object tracker) to keep continuous track of objects. To evaluate trackers in the presence of unreliable detections, we present a challenging real-world underwater fish tracking dataset, FISHTRAC. In an evaluation on FISHTRAC as well as the UA-DETRAC dataset, we find that RCT outperforms other algorithms when provided with imperfect detections, including state-of-the-art deep single and multi-object trackers as well as more classic approaches. Specifically, RCT has the best average HOTA across methods that successfully return results for all sequences, and has significantly less identity switches than other methods. 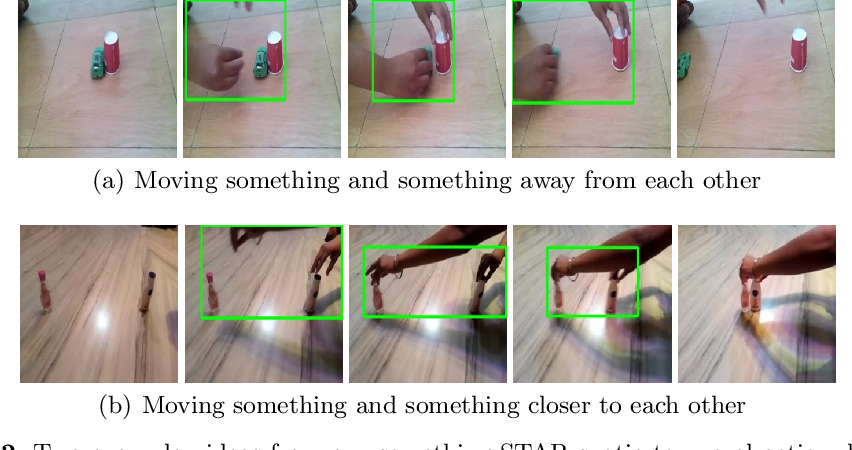 An Analysis of Pre-Training on Object Detection 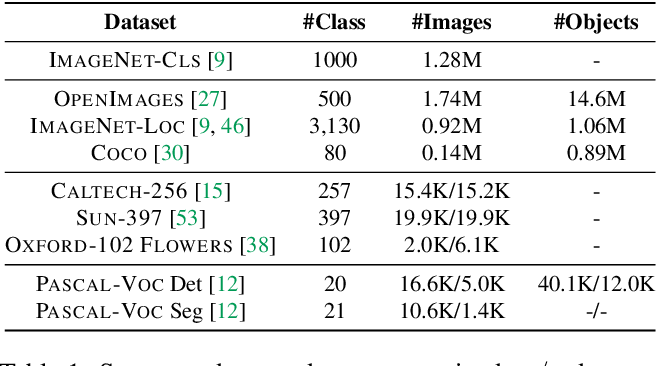 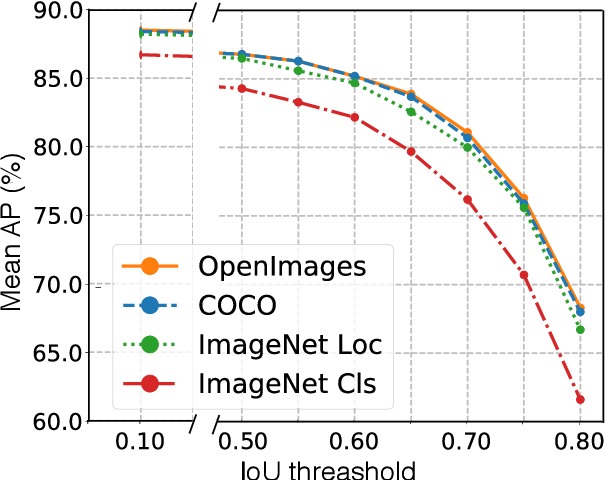 We provide a detailed analysis of convolutional neural networks which are pre-trained on the task of object detection. To this end, we train detectors on large datasets like OpenImagesV4, ImageNet Localization and COCO. We analyze how well their features generalize to tasks like image classification, semantic segmentation and object detection on small datasets like PASCAL-VOC, Caltech-256, SUN-397, Flowers-102 etc. Some important conclusions from our analysis are --- 1) Pre-training on large detection datasets is crucial for fine-tuning on small detection datasets, especially when precise localization is needed. For example, we obtain 81.1% mAP on the PASCAL-VOC dataset at 0.7 IoU after pre-training on OpenImagesV4, which is 7.6% better than the recently proposed DeformableConvNetsV2 which uses ImageNet pre-training. 2) Detection pre-training also benefits other localization tasks like semantic segmentation but adversely affects image classification. 3) Features for images (like avg. pooled Conv5) which are similar in the object detection feature space are likely to be similar in the image classification feature space but the converse is not true. 4) Visualization of features reveals that detection neurons have activations over an entire object, while activations for classification networks typically focus on parts. Therefore, detection networks are poor at classification when multiple instances are present in an image or when an instance only covers a small fraction of an image. 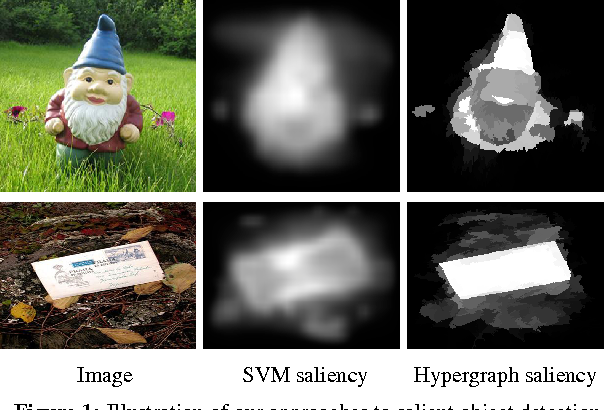 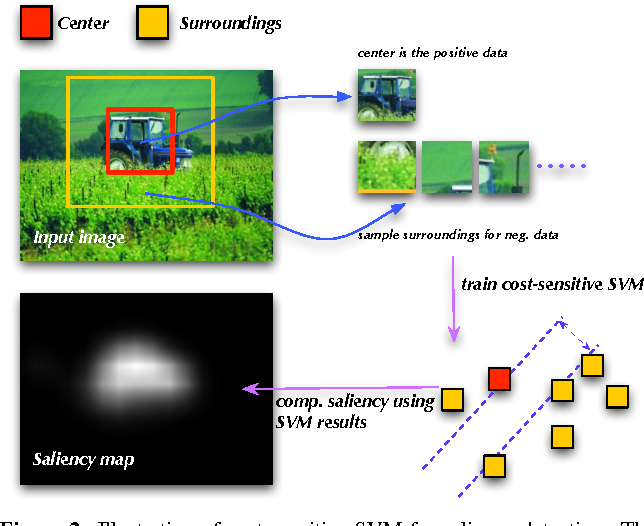 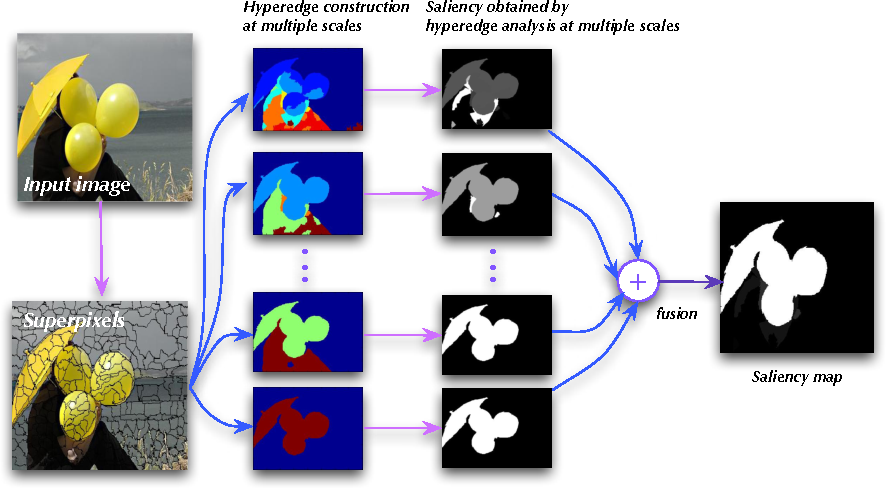 Salient object detection aims to locate objects that capture human attention within images. Previous approaches often pose this as a problem of image contrast analysis. In this work, we model an image as a hypergraph that utilizes a set of hyperedges to capture the contextual properties of image pixels or regions. As a result, the problem of salient object detection becomes one of finding salient vertices and hyperedges in the hypergraph. The main advantage of hypergraph modeling is that it takes into account each pixel's (or region's) affinity with its neighborhood as well as its separation from image background. Furthermore, we propose an alternative approach based on center-versus-surround contextual contrast analysis, which performs salient object detection by optimizing a cost-sensitive support vector machine (SVM) objective function. Experimental results on four challenging datasets demonstrate the effectiveness of the proposed approaches against the state-of-the-art approaches to salient object detection.