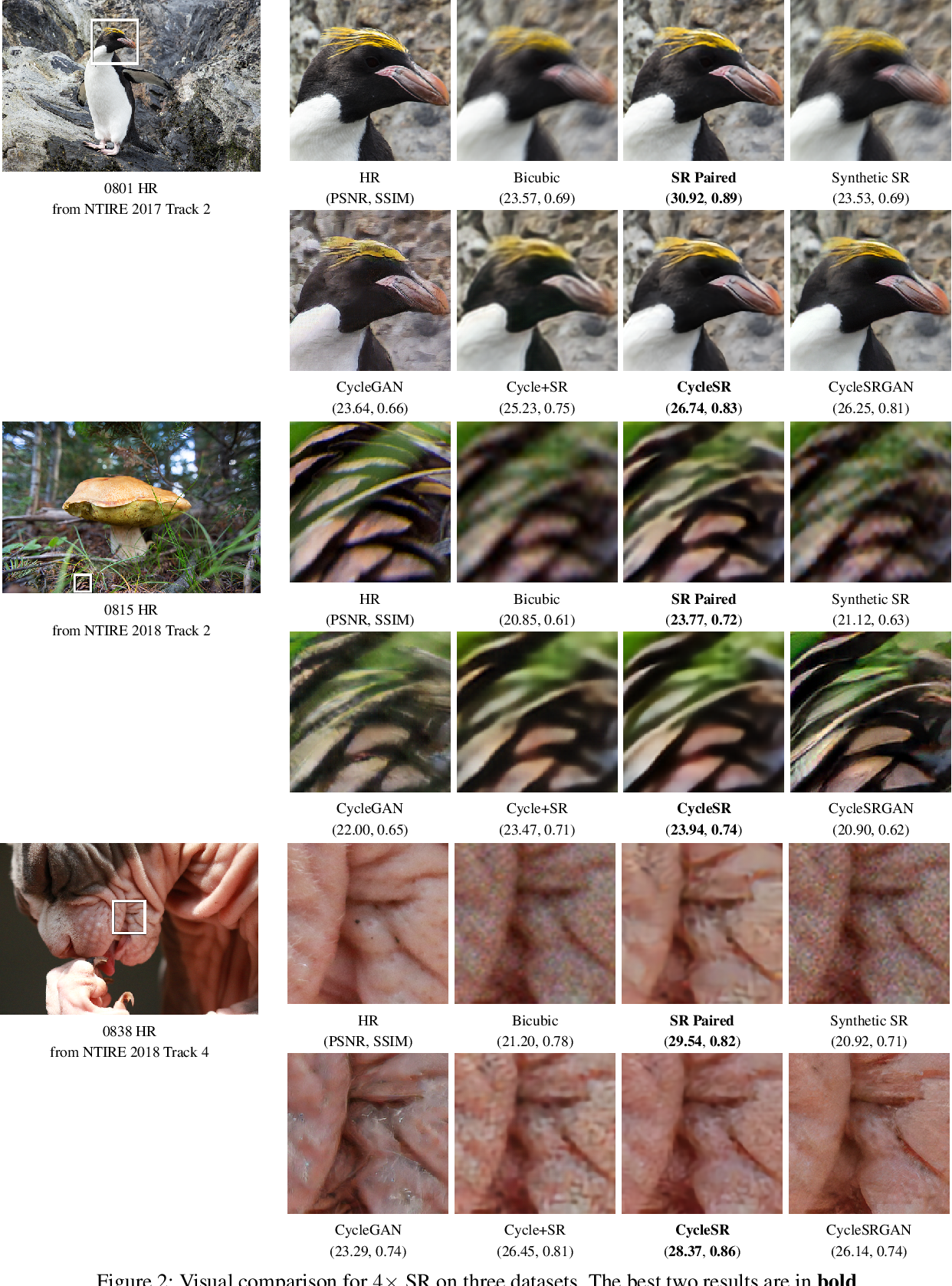 The task of single image super-resolution (SISR) aims at reconstructing a high-resolution (HR) image from a low-resolution (LR) image. Although significant progress has been made by deep learning models, they are trained on synthetic paired data in a supervised way and do not perform well on real data. There are several attempts that directly apply unsupervised image translation models to address such a problem. However, unsupervised low-level vision problem poses more challenge on the accuracy of translation. In this work,we propose a novel framework which is composed of two stages: 1) unsupervised image translation between real LR images and synthetic LR images; 2) supervised super-resolution from approximated real LR images to HR images. It takes the synthetic LR images as a bridge and creates an indirect supervised path from real LR images to HR images. Any existed deep learning based image super-resolution model can be integrated into the second stage of the proposed framework for further improvement. In addition it shows great flexibility in balancing between distortion and perceptual quality under unsupervised setting. The proposed method is evaluated on both NTIRE 2017 and 2018 challenge datasets and achieves favorable performance against supervised methods. 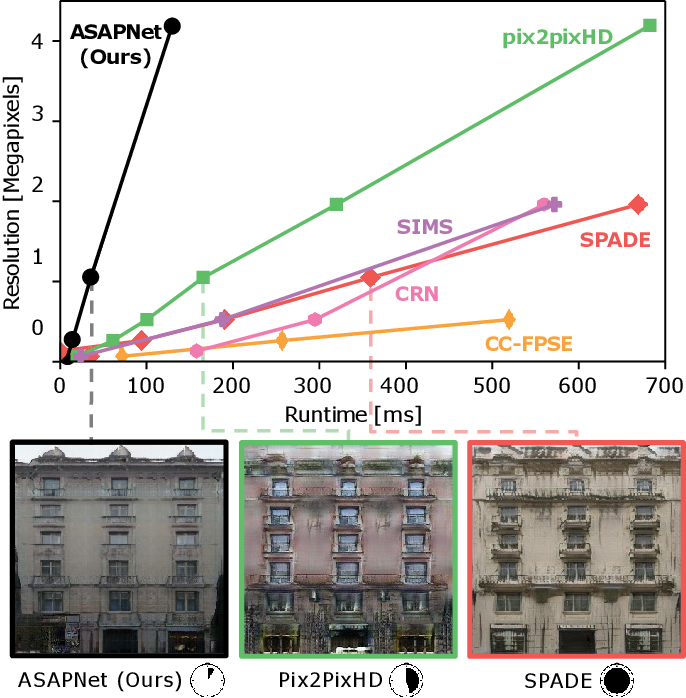 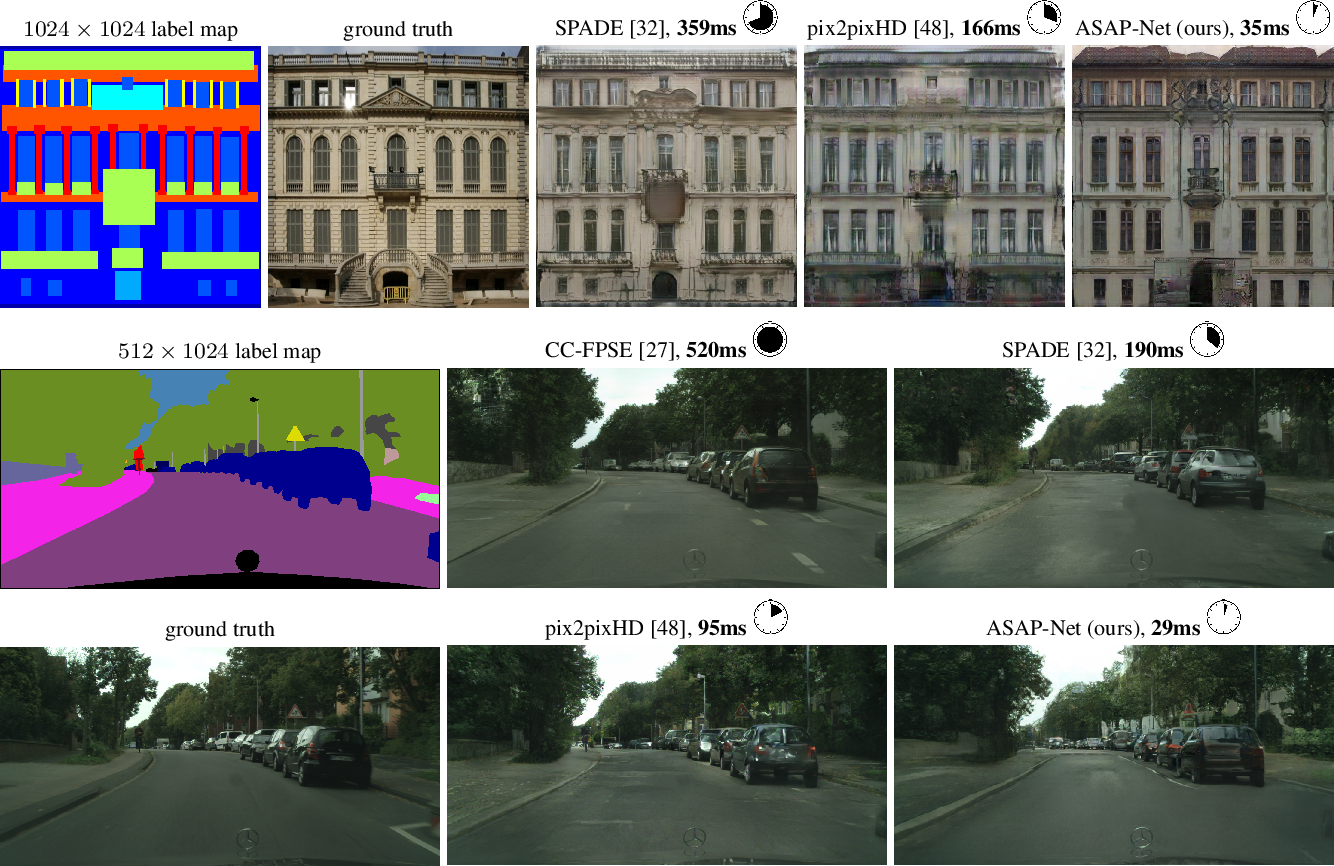 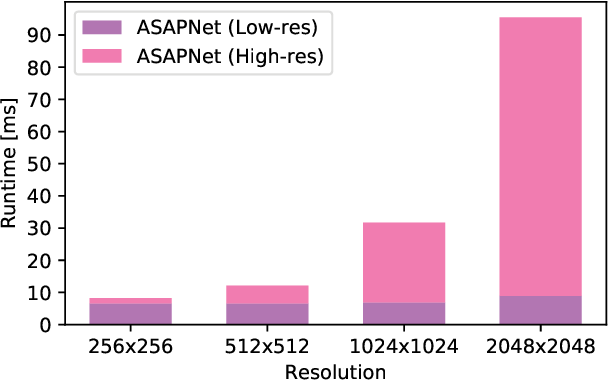 We introduce a new generator architecture, aimed at fast and efficient high-resolution image-to-image translation. We design the generator to be an extremely lightweight function of the full-resolution image. In fact, we use pixel-wise networks; that is, each pixel is processed independently of others, through a composition of simple affine transformations and nonlinearities. We take three important steps to equip such a seemingly simple function with adequate expressivity. First, the parameters of the pixel-wise networks are spatially varying so they can represent a broader function class than simple 1x1 convolutions. Second, these parameters are predicted by a fast convolutional network that processes an aggressively low-resolution representation of the input; Third, we augment the input image with a sinusoidal encoding of spatial coordinates, which provides an effective inductive bias for generating realistic novel high-frequency image content. As a result, our model is up to 18x faster than state-of-the-art baselines. We achieve this speedup while generating comparable visual quality across different image resolutions and translation domains. 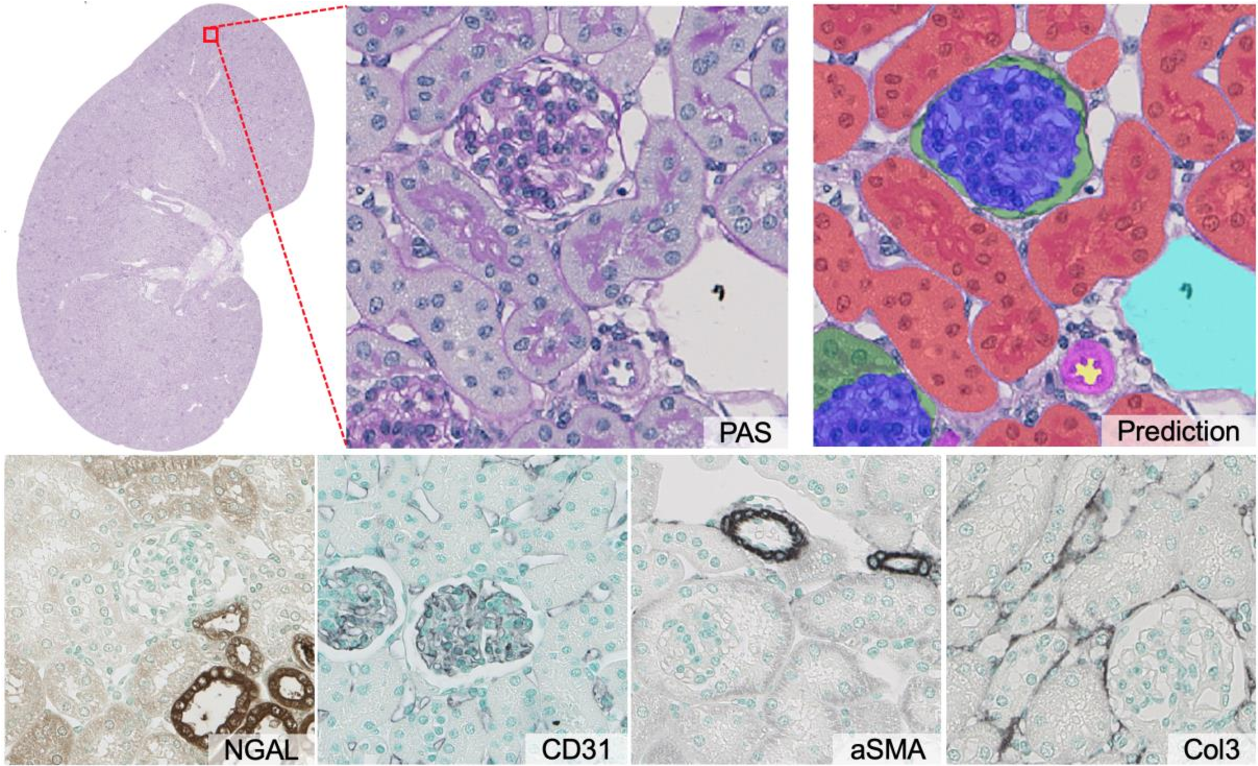 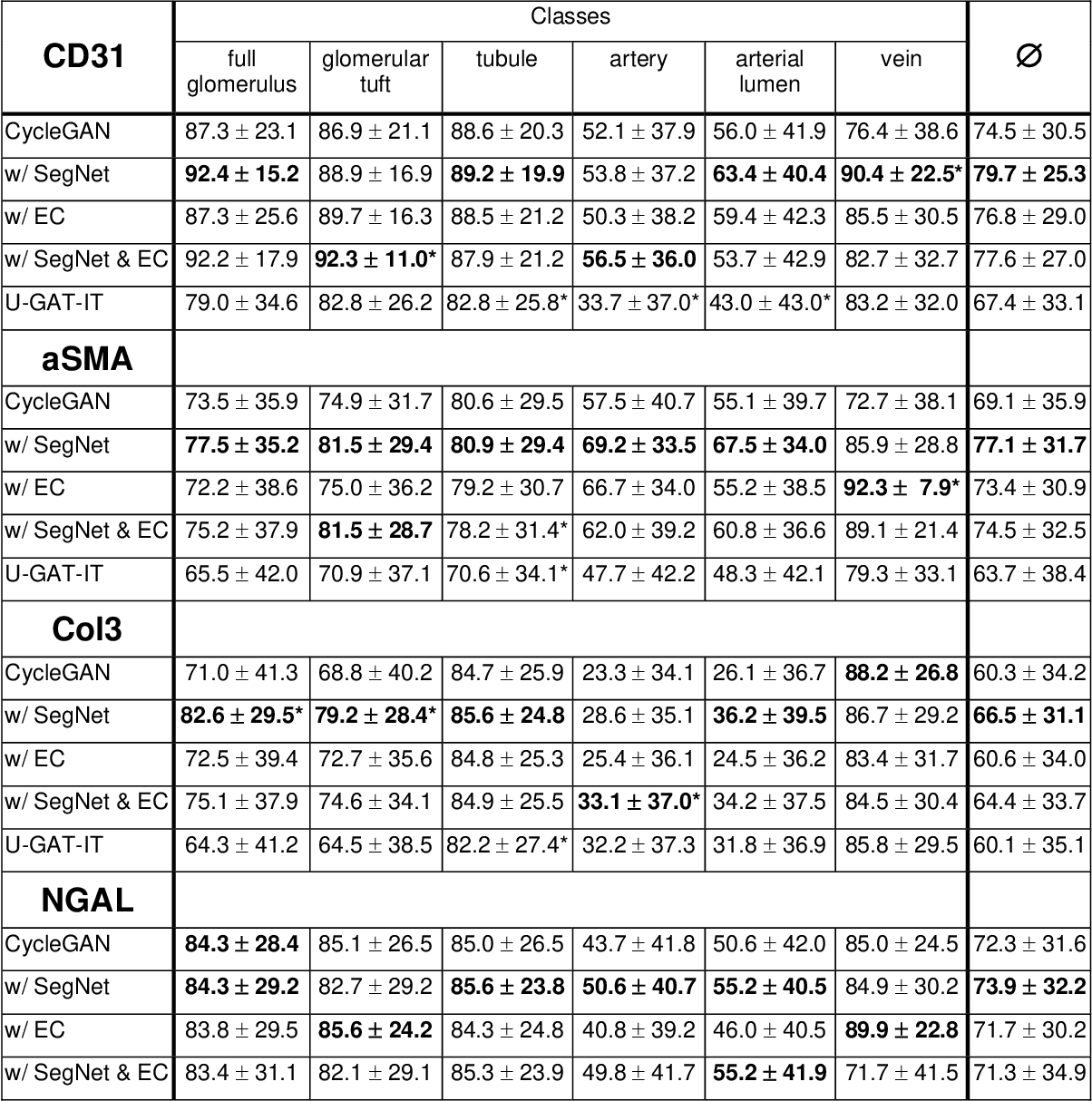 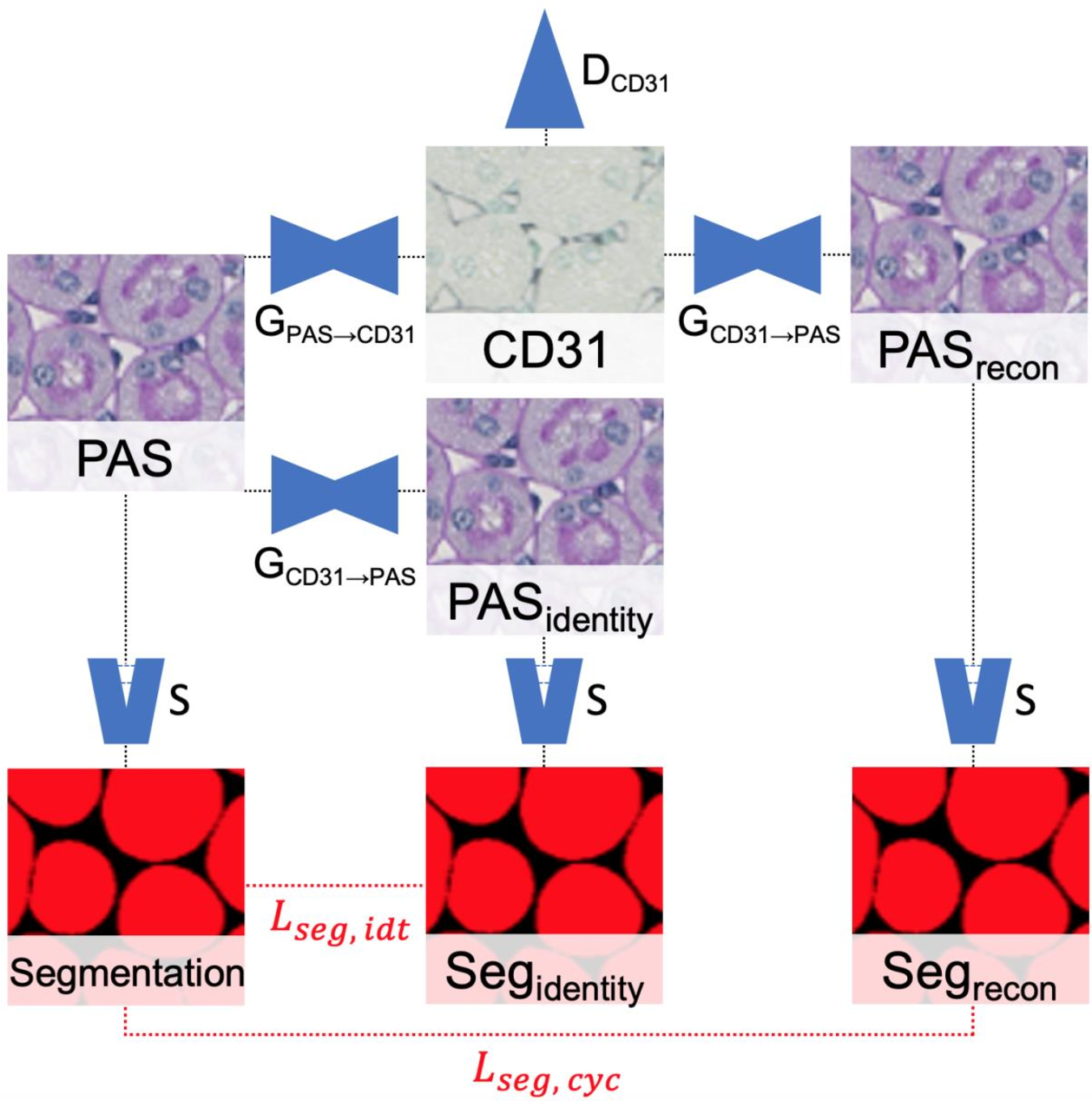 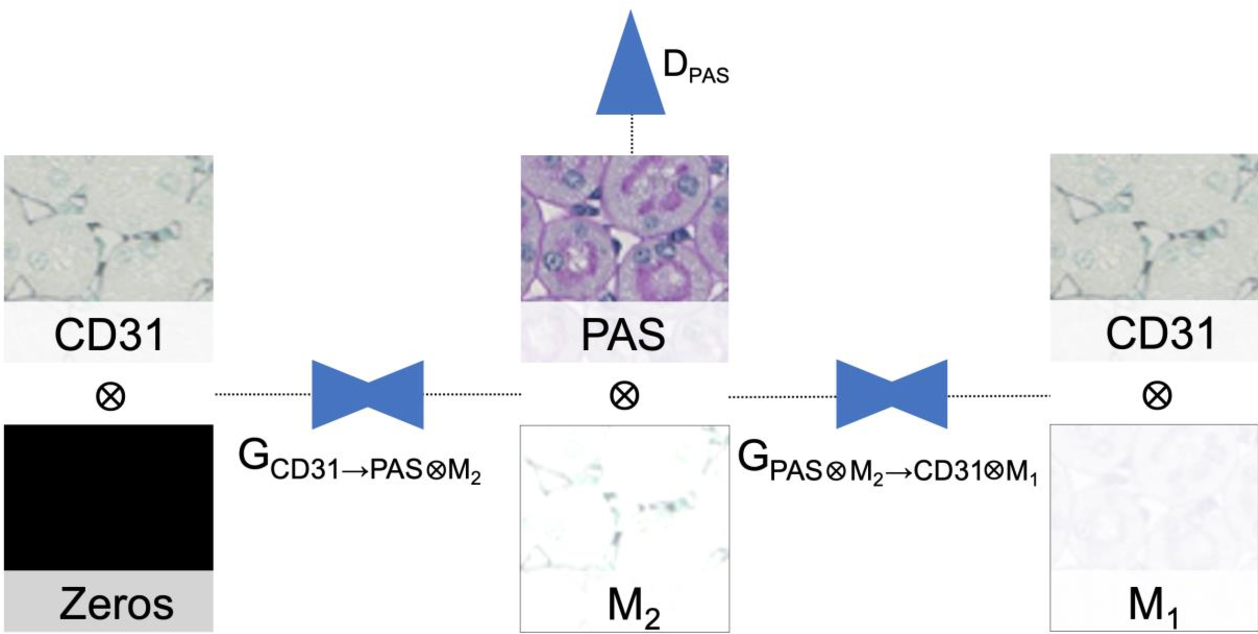 In digital pathology, many image analysis tasks are challenged by the need for large and time-consuming manual data annotations to cope with various sources of variability in the image domain. Unsupervised domain adaptation based on image-to-image translation is gaining importance in this field by addressing variabilities without the manual overhead. Here, we tackle the variation of different histological stains by unsupervised stain-to-stain translation to enable a stain-independent applicability of a deep learning segmentation model. We use CycleGANs for stain-to-stain translation in kidney histopathology, and propose two novel approaches to improve translational effectivity. First, we integrate a prior segmentation network into the CycleGAN for a self-supervised, application-oriented optimization of translation through semantic guidance, and second, we incorporate extra channels to the translation output to implicitly separate artificial meta-information otherwise encoded for tackling underdetermined reconstructions. The latter showed partially superior performances to the unmodified CycleGAN, but the former performed best in all stains providing instance-level Dice scores ranging between 78% and 92% for most kidney structures, such as glomeruli, tubules, and veins. However, CycleGANs showed only limited performance in the translation of other structures, e.g. arteries. Our study also found somewhat lower performance for all structures in all stains when compared to segmentation in the original stain. Our study suggests that with current unsupervised technologies, it seems unlikely to produce generally applicable fake stains. 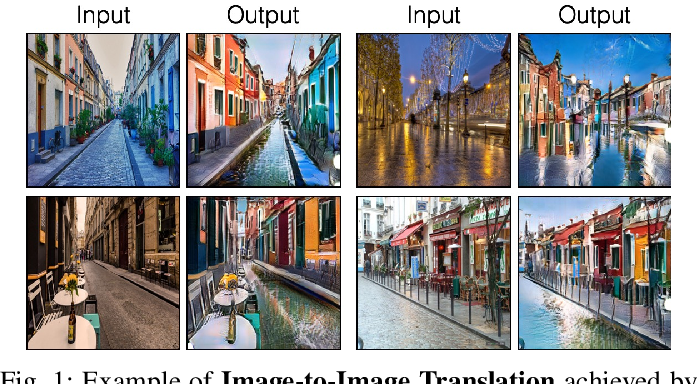 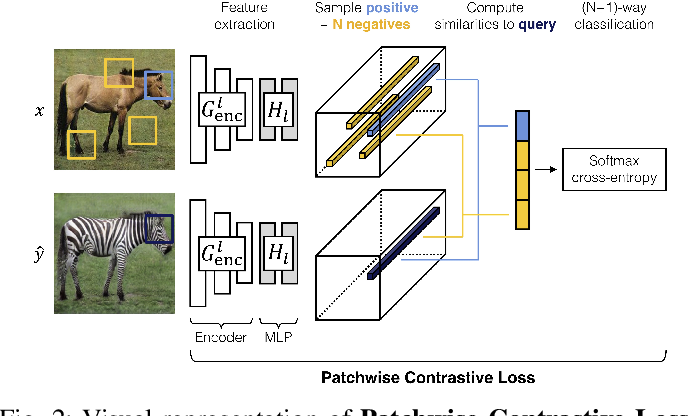 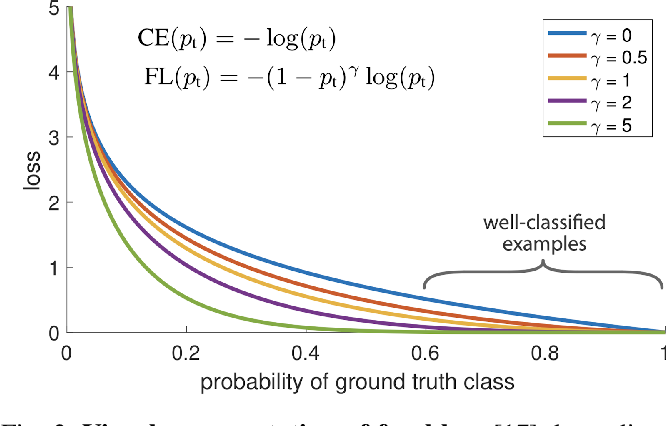 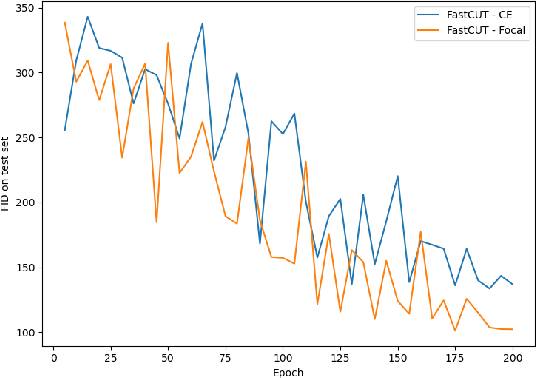 Image-to-image translation models transfer images from input domain to output domain in an endeavor to retain the original content of the image. Contrastive Unpaired Translation is one of the existing methods for solving such problems. Significant advantage of this method, compared to competitors, is the ability to train and perform well in cases where both input and output domains are only a single image. Another key thing that differentiates this method from its predecessors is the usage of image patches rather than the whole images. It also turns out that sampling negatives (patches required to calculate the loss) from the same image achieves better results than a scenario where the negatives are sampled from other images in the dataset. This type of approach encourages mapping of corresponding patches to the same location in relation to other patches (negatives) while at the same time improves the output image quality and significantly decreases memory usage as well as the time required to train the model compared to CycleGAN method used as a baseline. Through a series of experiments we show that using focal loss in place of cross-entropy loss within the PatchNCE loss can improve on the model's performance and even surpass the current state-of-the-art model for image-to-image translation. 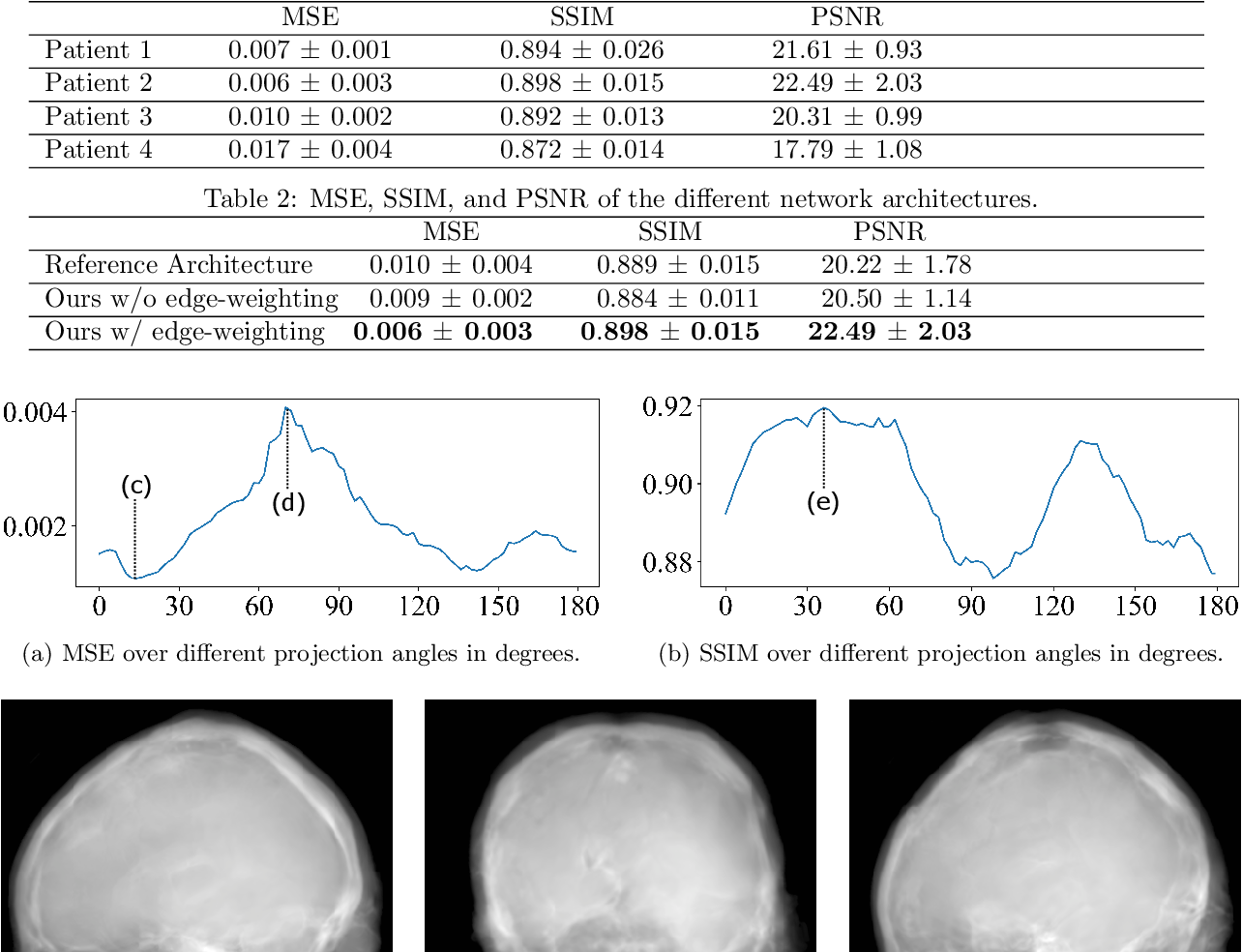 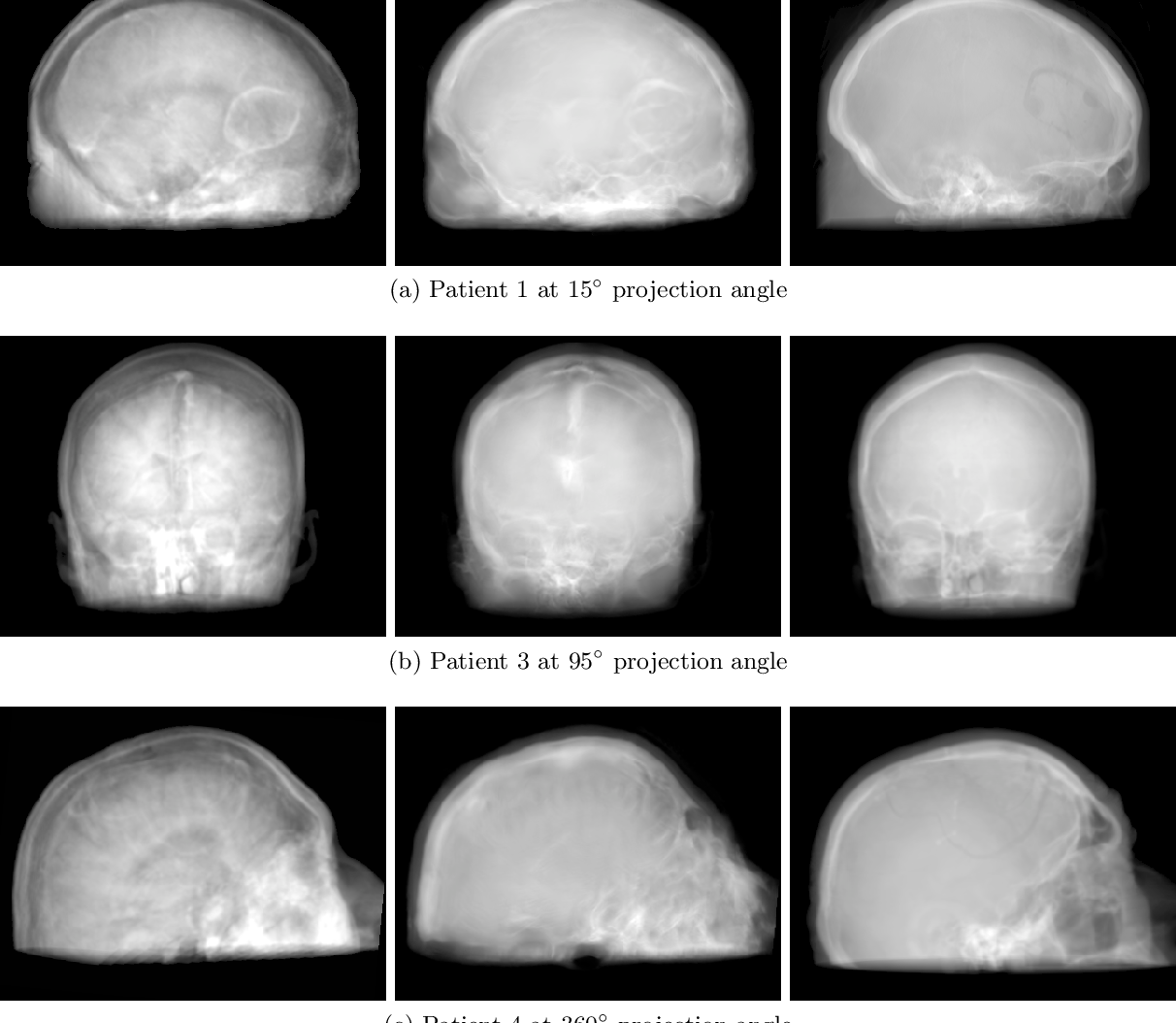 The potential benefit of hybrid X-ray and MR imaging in the interventional environment is enormous. However, a vast amount of existing image enhancement methods requires the image information to be present in the same domain. To unlock this potential, we present a solution to image-to-image translation from MR projections to corresponding X-ray projection images. The approach is based on a state-of-the-art image generator network that is modified to fit the specific application. Furthermore, we propose the inclusion of a gradient map to the perceptual loss to emphasize high frequency details. The proposed approach is capable of creating X-ray projection images with natural appearance. Additionally, our extensions show clear improvement compared to the baseline method. 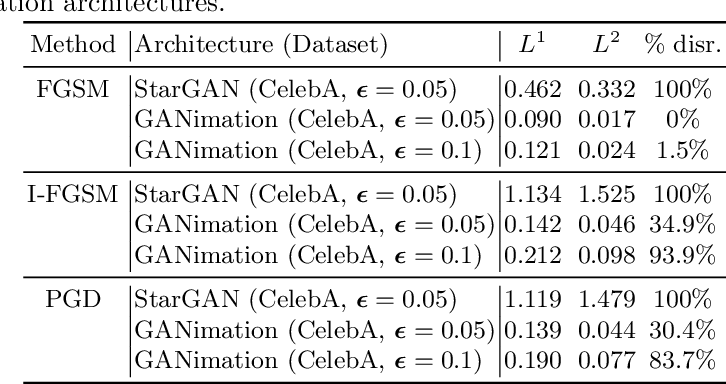 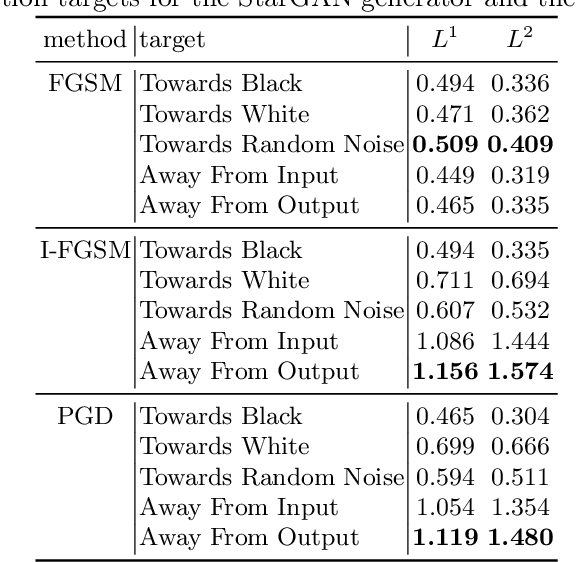 Face modification systems using deep learning have become increasingly powerful and accessible. Given images of a person's face, such systems can generate new images of that same person under different expressions and poses. Some systems can also modify targeted attributes such as hair color or age. This type of manipulated images and video have been coined DeepFakes. In order to prevent a malicious user from generating modified images of a person without their consent we tackle the new problem of generating adversarial attacks against image translation systems, which disrupt the resulting output image. We call this problem disrupting deepfakes. We adapt traditional adversarial attacks to our scenario. Most image translation architectures are generative models conditioned on an attribute (e.g. put a smile on this person's face). We present class transferable adversarial attacks that generalize to different classes, which means that the attacker does not need to have knowledge about the conditioning vector. In gray-box scenarios, blurring can mount a successful defense against disruption. We present a spread-spectrum adversarial attack, which evades blurring defenses. 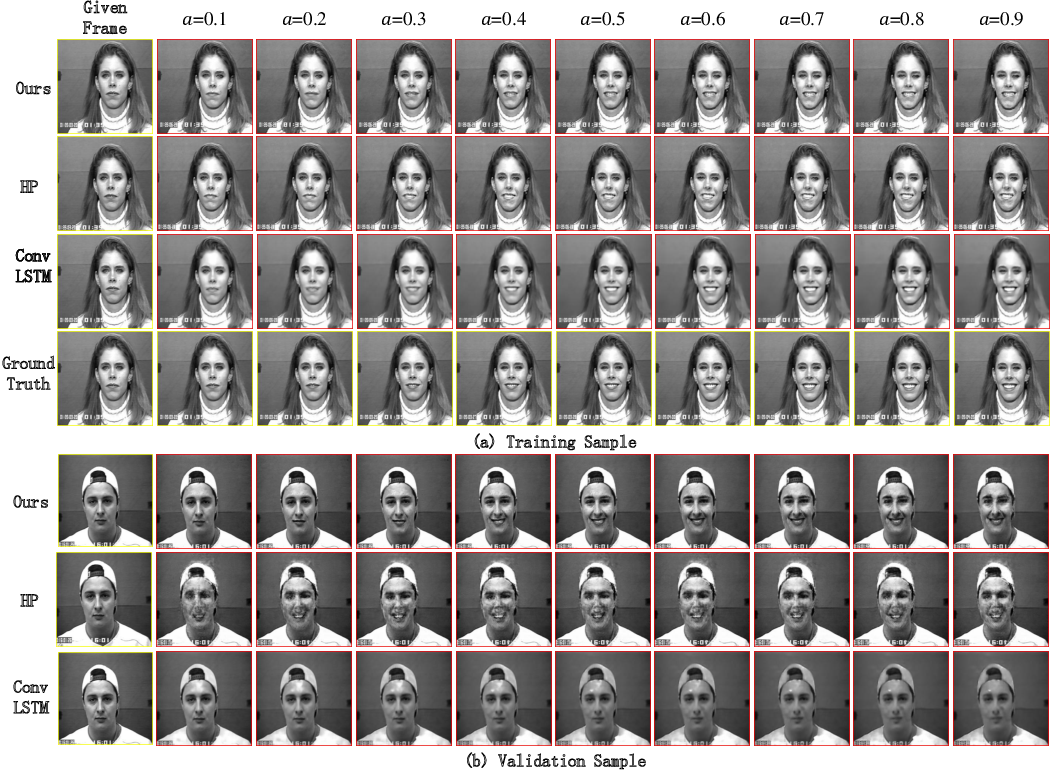 The recent advances in deep learning have made it possible to generate photo-realistic images by using neural networks and even to extrapolate video frames from an input video clip. In this paper, for the sake of both furthering this exploration and our own interest in a realistic application, we study image-to-video translation and particularly focus on the videos of facial expressions. This problem challenges the deep neural networks by another temporal dimension comparing to the image-to-image translation. Moreover, its single input image fails most existing video generation methods that rely on recurrent models. We propose a user-controllable approach so as to generate video clips of various lengths from a single face image. The lengths and types of the expressions are controlled by users. To this end, we design a novel neural network architecture that can incorporate the user input into its skip connections and propose several improvements to the adversarial training method for the neural network. Experiments and user studies verify the effectiveness of our approach. Especially, we would like to highlight that even for the face images in the wild (downloaded from the Web and the authors' own photos), our model can generate high-quality facial expression videos of which about 50\% are labeled as real by Amazon Mechanical Turk workers. 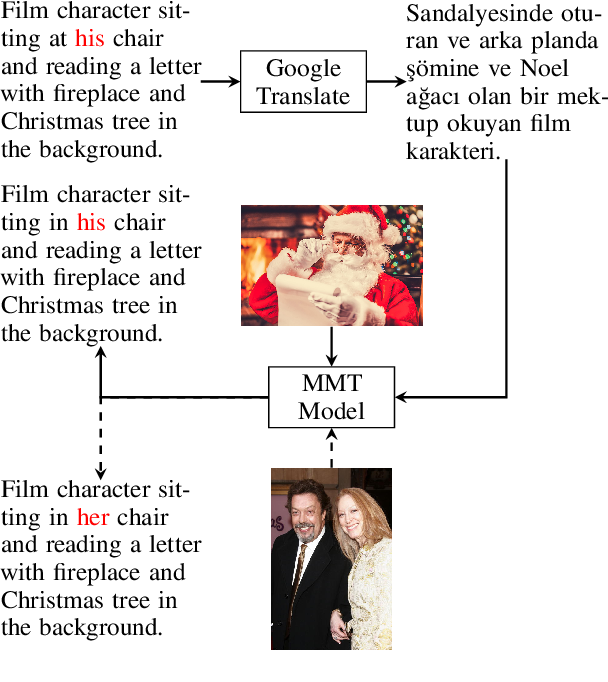 Multimodal machine translation (MMT) systems have been shown to outperform their text-only neural machine translation (NMT) counterparts when visual context is available. However, recent studies have also shown that the performance of MMT models is only marginally impacted when the associated image is replaced with an unrelated image or noise, which suggests that the visual context might not be exploited by the model at all. We hypothesize that this might be caused by the nature of the commonly used evaluation benchmark, also known as Multi30K, where the translations of image captions were prepared without actually showing the images to human translators. In this paper, we present a qualitative study that examines the role of datasets in stimulating the leverage of visual modality and we propose methods to highlight the importance of visual signals in the datasets which demonstrate improvements in reliance of models on the source images. Our findings suggest the research on effective MMT architectures is currently impaired by the lack of suitable datasets and careful consideration must be taken in creation of future MMT datasets, for which we also provide useful insights. 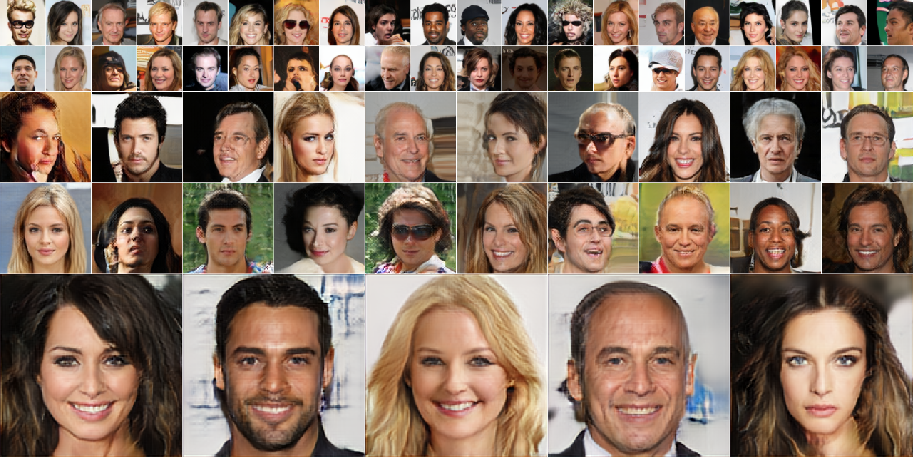 This paper addresses the modeling and simulation of progressive changes over time, such as human face aging. By treating the age phases as a sequence of image domains, we construct a chain of transformers that map images from one age domain to the next. Leveraging recent adversarial image translation methods, our approach requires no training samples of the same individual at different ages. Here, the model must be flexible enough to translate a child face to a young adult, and all the way through the adulthood to old age. We find that some transformers in the chain can be recursively applied on their own output to cover multiple phases, compressing the chain. The structure of the chain also unearths information about the underlying physical process. We demonstrate the performance of our method with precise and intuitive metrics, and visually match with the face aging state-of-the-art.


* To appear in Advanced Concepts for Intelligent Vision Systems (ACIVS) 2018 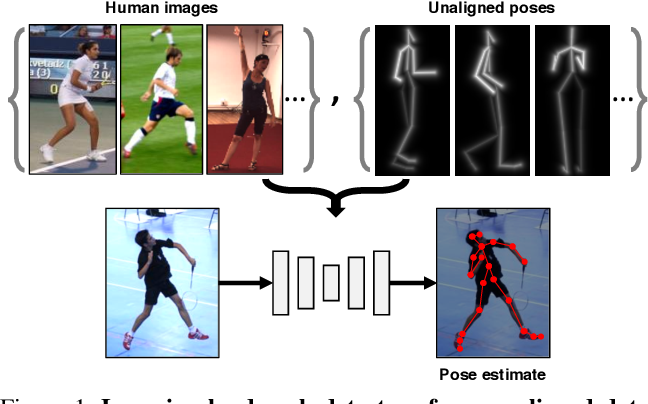 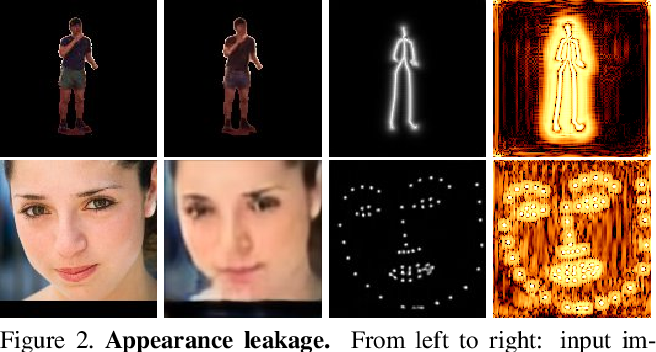 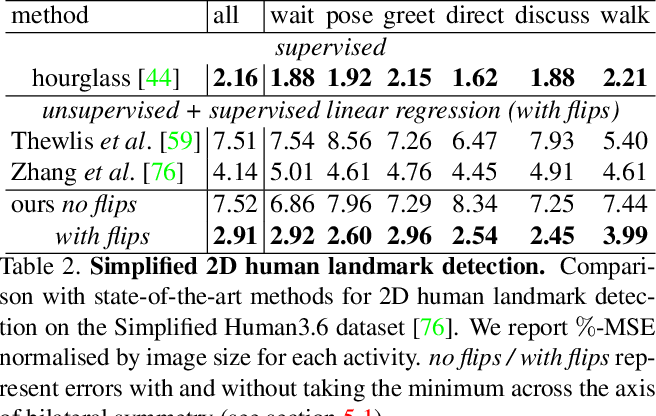 We introduce a method for learning landmark detectors from unlabelled video frames and unpaired labels. This allows us to learn a detector from a large collection of raw videos given only a few example annotations harvested from existing data or motion capture. We achieve this by formulating the landmark detection task as one of image translation, learning to map an image of the object to an image of its landmarks, represented as a skeleton. The advantage is that this translation problem can then be tackled by CycleGAN. However, we show that a naive application of CycleGAN confounds appearance and pose information, with suboptimal keypoint detection performance. We solve this problem by introducing an analytical and differentiable renderer for the skeleton image so that no appearance information can be leaked in the skeleton. Then, since cycle consistency requires to reconstruct the input image from the skeleton, we supply the appearance information thus removed by conditioning the generator with a second image of the same object (e.g. another frame from a video). Furthermore, while CycleGAN uses two cycle consistency constraints, we show that the second one is detrimental in this application and we discard it, significantly simplifying the model. We show that these modifications improve the quality of the learned detector leading to state-of-the-art unsupervised landmark detection performance in a number of challenging human pose and facial landmark detection benchmarks.