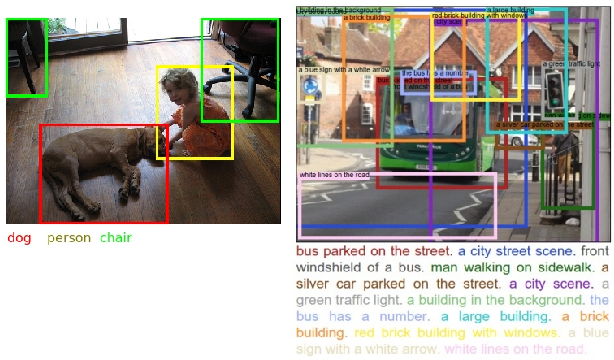 In Multimodal Neural Machine Translation (MNMT), a neural model generates a translated sentence that describes an image, given the image itself and one source descriptions in English. This is considered as the multimodal image caption translation task. The images are processed with Convolutional Neural Network (CNN) to extract visual features exploitable by the translation model. So far, the CNNs used are pre-trained on object detection and localization task. We hypothesize that richer architecture, such as dense captioning models, may be more suitable for MNMT and could lead to improved translations. We extend this intuition to the word-embeddings, where we compute both linguistic and visual representation for our corpus vocabulary. We combine and compare different confi 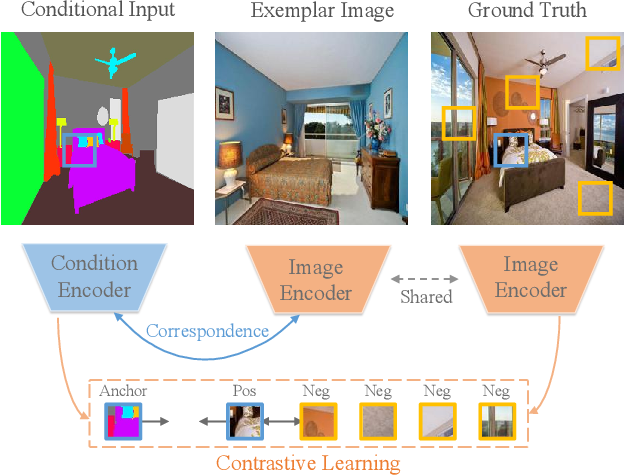 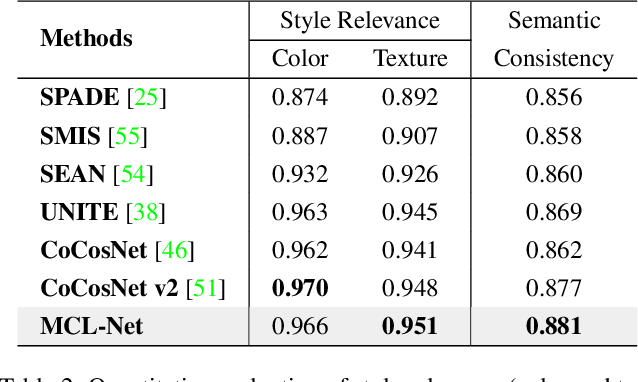 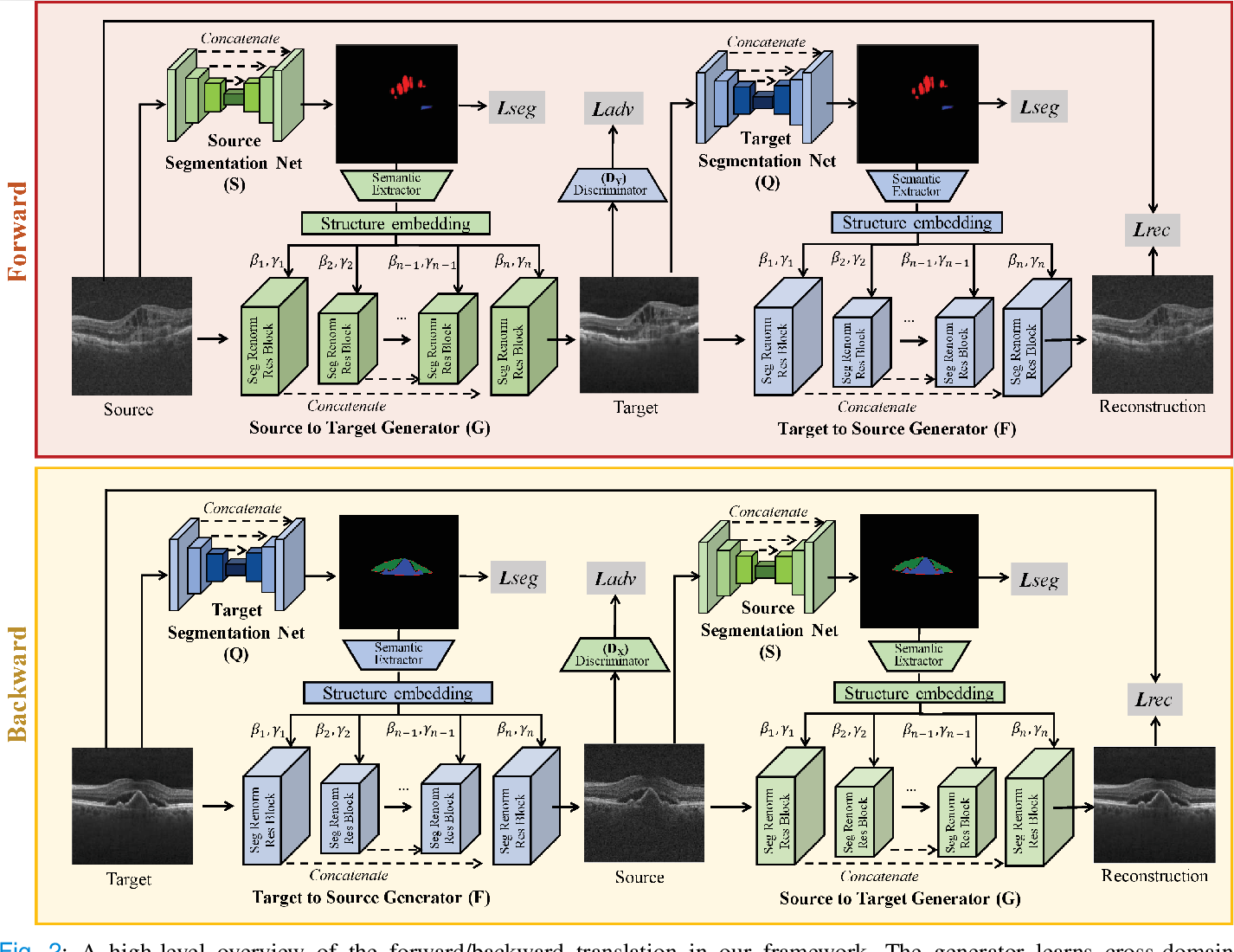 Deep networks are now ubiquitous in large-scale multi-center imaging studies. However, the direct aggregation of images across sites is contraindicated for downstream statistical and deep learning-based image analysis due to inconsistent contrast, resolution, and noise. To this end, in the absence of paired data, variations of Cycle-consistent Generative Adversarial Networks have been used to harmonize image sets between a source and target domain. Importantly, these methods are prone to instability, contrast inversion, intractable manipulation of pathology, and steganographic mappings which limit their reliable adoption in real-world medical imaging. In this work, based on an underlying assumption that morphological shape is consistent across imaging sites, we propose a segmentation-renormalized image translation framework to reduce inter-scanner heterogeneity while preserving anatomical layout. We replace the affine transformations used in the normalization layers within generative networks with trainable scale and shift parameters conditioned on jointly learned anatomical segmentation embeddings to modulate features at every level of translation. We evaluate our methodologies against recent baselines across several imaging modalities (T1w MRI, FLAIR MRI, and OCT) on datasets with and without lesions. Segmentation-renormalization for translation GANs yields superior image harmonization as quantified by Inception distances, demonstrates improved downstream utility via post-hoc segmentation accuracy, and improved robustness to translation perturbation and self-adversarial attacks. 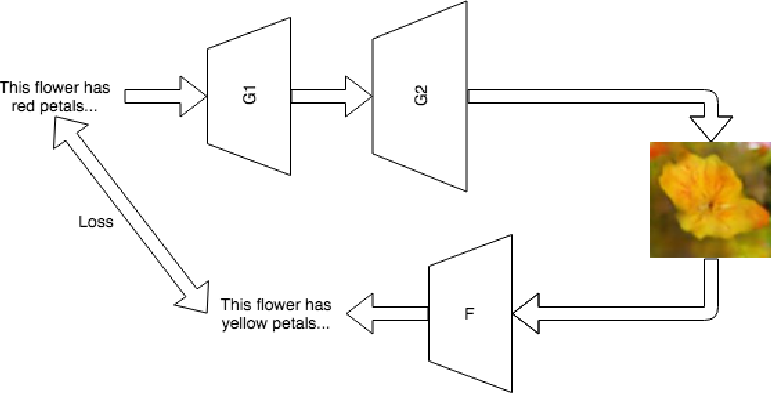 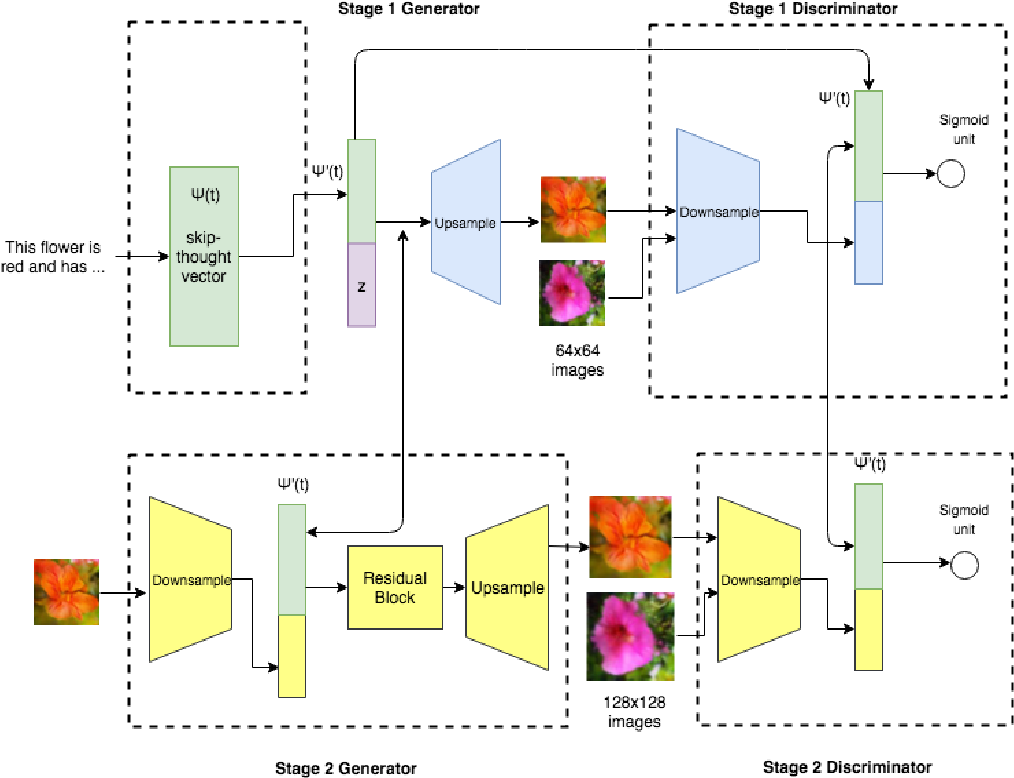 Text-to-Image translation has been an active area of research in the recent past. The ability for a network to learn the meaning of a sentence and generate an accurate image that depicts the sentence shows ability of the model to think more like humans. Popular methods on text to image translation make use of Generative Adversarial Networks (GANs) to generate high quality images based on text input, but the generated images don't always reflect the meaning of the sentence given to the model as input. We address this issue by using a captioning network to caption on generated images and exploit the distance between ground truth captions and generated captions to improve the network further. We show extensive comparisons between our method and existing methods. 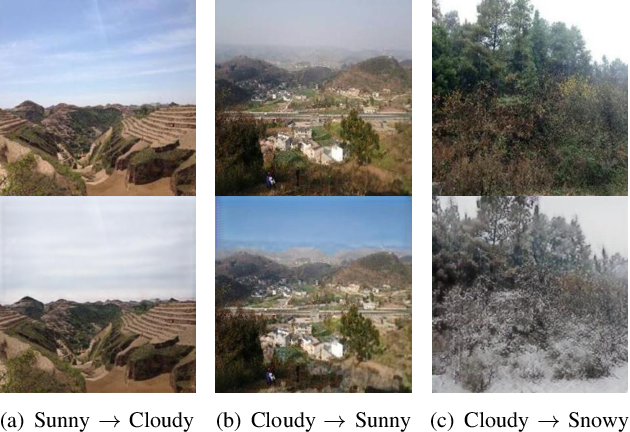 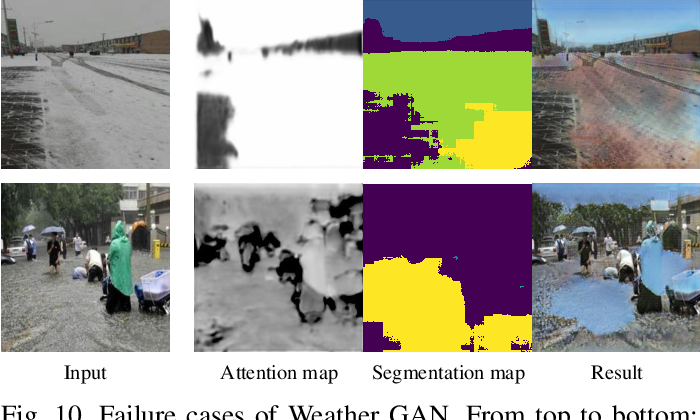 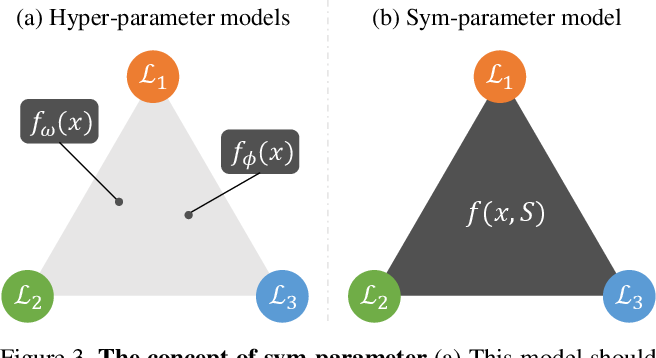 Recent advances in image-to-image translation have led to some ways to generate multiple domain images through a single network. However, there is still a limit in creating an image of a target domain without a dataset on it. We propose a method to expand the concept of `multi-domain' from data to the loss area, and to combine the characteristics of each domain to create an image. First, we introduce a sym-parameter and its learning method that can mix various losses and can synchronize them with input conditions. Then, we propose Sym-parameterized Generative Network (SGN) using it. Through experiments, we confirmed that SGN could mix the characteristics of various data and loss, and it is possible to translate images to any mixed-domain without ground truths, such as 30% Van Gogh and 20% Monet.

Structural-analogy from a Single Image Pair 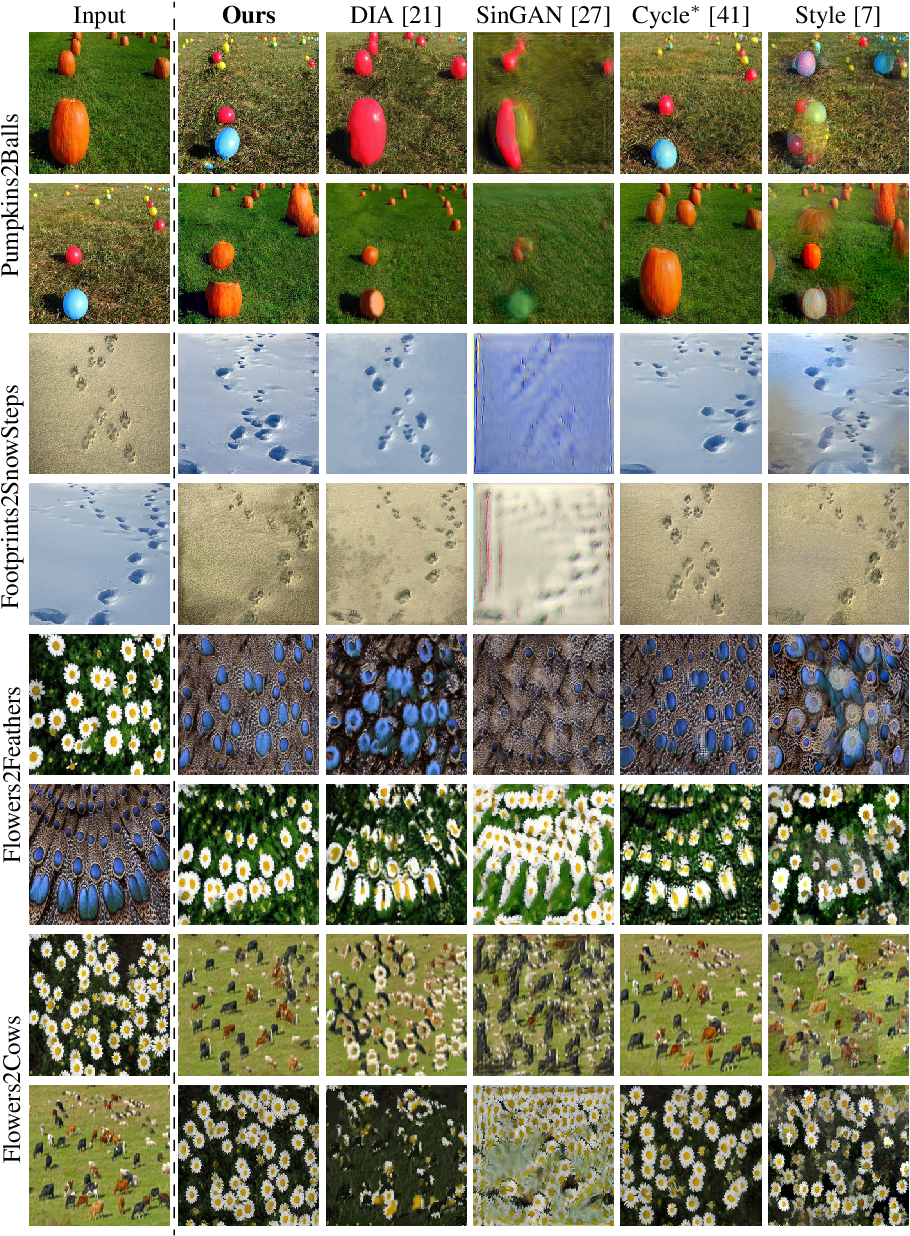 The task of unsupervised image-to-image translation has seen substantial advancements in recent years through the use of deep neural networks. Typically, the proposed solutions learn the characterizing distribution of two large, unpaired collections of images, and are able to alter the appearance of a given image, while keeping its geometry intact. In this paper, we explore the capabilities of neural networks to understand image structure given only a single pair of images, A and B. We seek to generate images that are structurally aligned: that is, to generate an image that keeps the appearance and style of B, but has a structural arrangement that corresponds to A. The key idea is to map between image patches at different scales. This enables controlling the granularity at which analogies are produced, which determines the conceptual distinction between style and content. In addition to structural alignment, our method can be used to generate high quality imagery in other conditional generation tasks utilizing images A and B only: guided image synthesis, style and texture transfer, text translation as well as video translation. Our code and additional results are available in https://github.com/rmokady/structural-analogy/.

Conversion of one font to another font is very useful in real life applications. In this paper, we propose a Convolutional Recurrent Generative model to solve the word level font transfer problem. Our network is able to convert the font style of any printed text images from its current font to the required font. The network is trained end-to-end for the complete word images. Thus it eliminates the necessary pre-processing steps, like character segmentations. We extend our model to conditional setting that helps to learn one-to-many mapping function. We employ a novel convolutional recurrent model architecture in the Generator that efficiently deals with the word images of arbitrary width. It also helps to maintain the consistency of the final images after concatenating the generated image patches of target font. Besides, the Generator and the Discriminator network, we employ a Classification network to classify the generated word images of converted font style to their subsequent font categories. Most of the earlier works related to image translation are performed on square images. Our proposed architecture is the first work which can handle images of varying widths. Word images generally have varying width depending on the number of characters present. Hence, we test our model on a synthetically generated font dataset. We compare our method with some of the state-of-the-art methods for image translation. The superior performance of our network on the same dataset proves the ability of our model to learn the font distributions.


* To be appeared in ICPR 2018, 2018 International Conference on Pattern Recognition