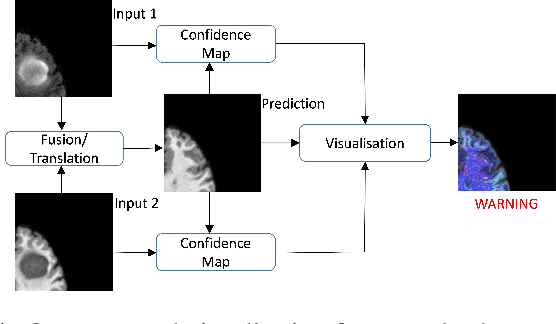 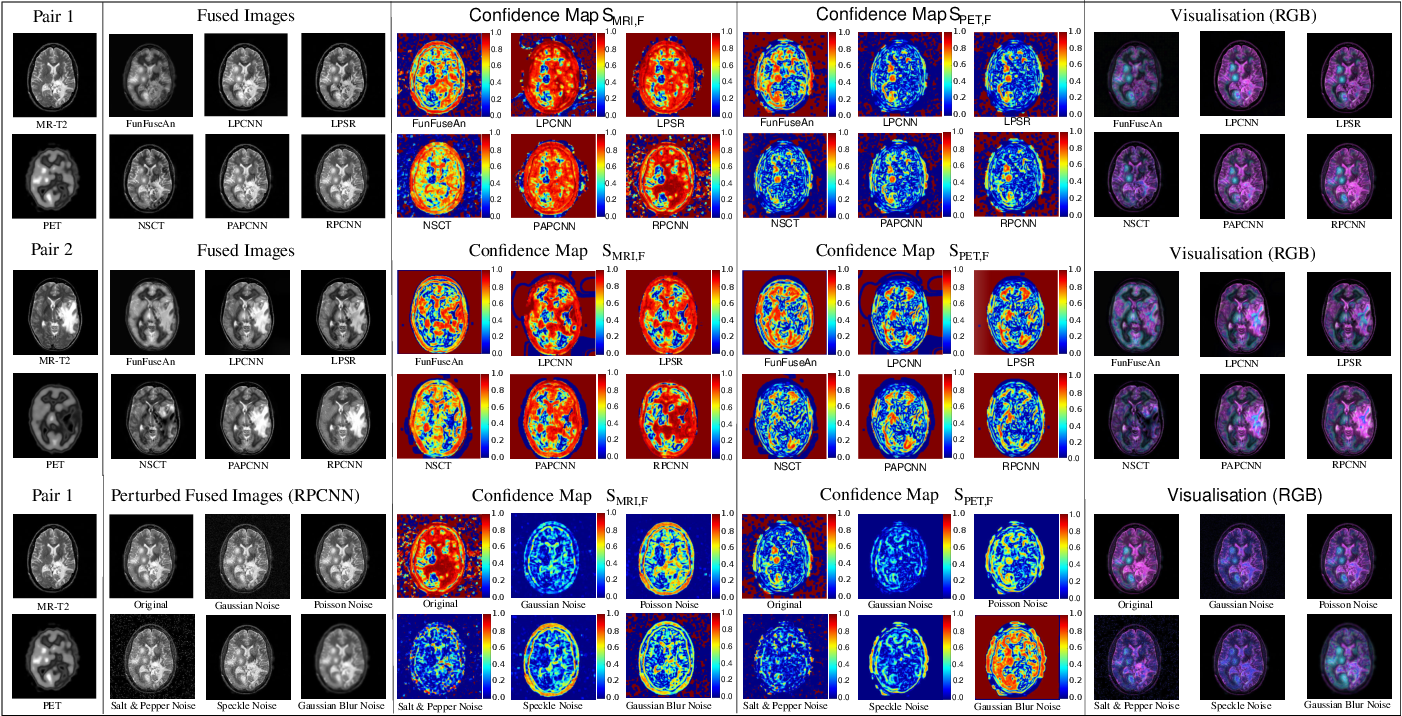 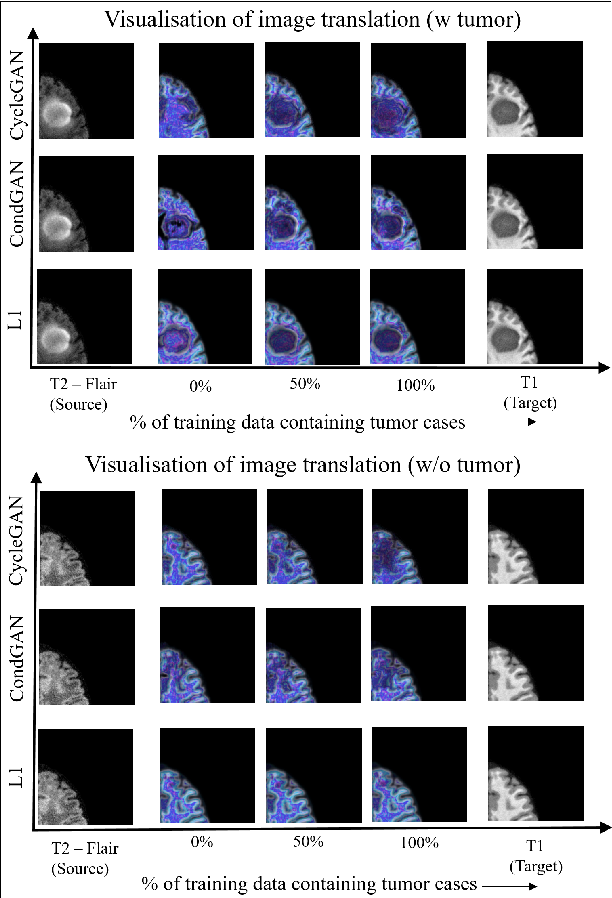 The medical image fusion combines two or more modalities into a single view while medical image translation synthesizes new images and assists in data augmentation. Together, these methods help in faster diagnosis of high grade malignant gliomas. However, they might be untrustworthy due to which neurosurgeons demand a robust visualisation tool to verify the reliability of the fusion and translation results before they make pre-operative surgical decisions. In this paper, we propose a novel approach to compute a confidence heat map between the source-target image pair by estimating the information transfer from the source to the target image using the joint probability distribution of the two images. We evaluate several fusion and translation methods using our visualisation procedure and showcase its robustness in enabling neurosurgeons to make finer clinical decisions. 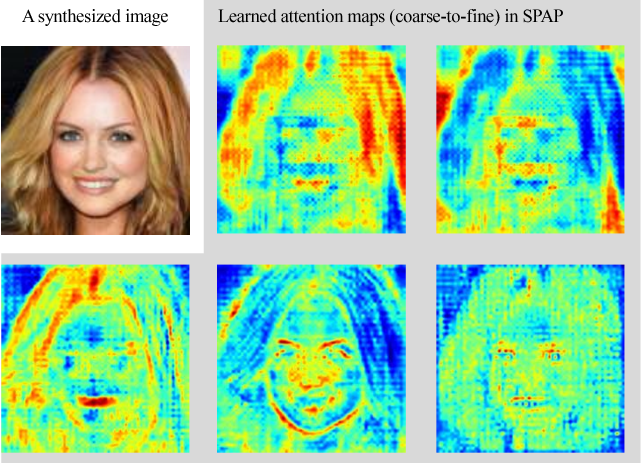 Image synthesis and image-to-image translation are two important generative learning tasks. Remarkable progress has been made by learning Generative Adversarial Networks (GANs)~\cite{goodfellow2014generative} and cycle-consistent GANs (CycleGANs)~\cite{zhu2017unpaired} respectively. This paper presents a method of learning Spatial Pyramid Attentive Pooling (SPAP) which is a novel architectural unit and can be easily integrated into both generators and discriminators in GANs and CycleGANs. The proposed SPAP integrates Atrous spatial pyramid~\cite{chen2018deeplab}, a proposed cascade attention mechanism and residual connections~\cite{he2016deep}. It leverages the advantages of the three components to facilitate effective end-to-end generative learning: (i) the capability of fusing multi-scale information by ASPP; (ii) the capability of capturing relative importance between both spatial locations (especially multi-scale context) or feature channels by attention; (iii) the capability of preserving information and enhancing optimization feasibility by residual connections. Coarse-to-fine and fine-to-coarse SPAP are studied and intriguing attention maps are observed in both tasks. In experiments, the proposed SPAP is tested in GANs on the Celeba-HQ-128 dataset~\cite{karras2017progressive}, and tested in CycleGANs on the Image-to-Image translation datasets including the Cityscape dataset~\cite{cordts2016cityscapes}, Facade and Aerial Maps dataset~\cite{zhu2017unpaired}, both obtaining better performance. 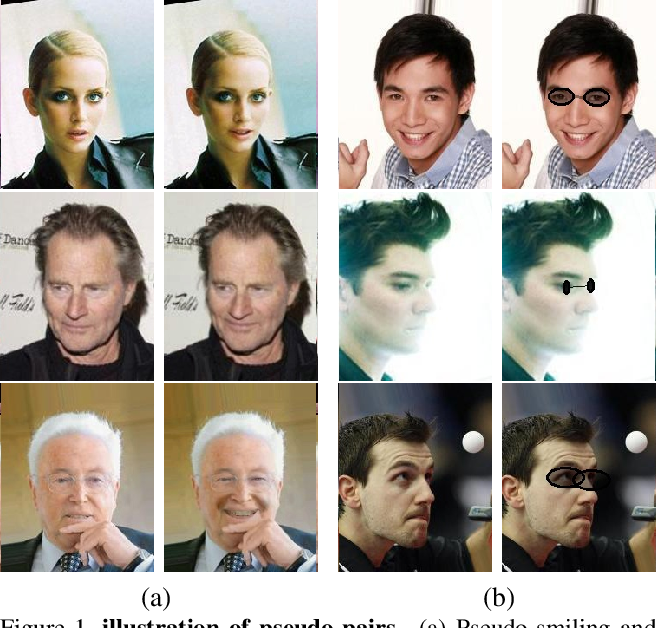 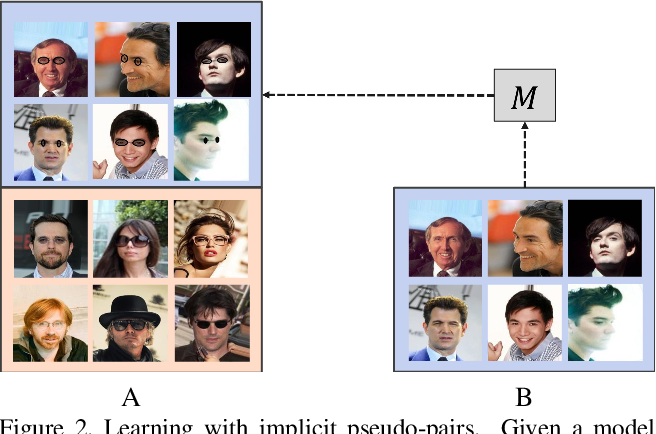 In image-to-image translation the goal is to learn a mapping from one image domain to another. Supervised approaches learn the mapping from paired samples. However, collecting large sets of image pairs is often prohibitively expensive or infeasible. In our work, we show that even training on the pairs implicitly, boosts the performance of unsupervised techniques by over 14% across several measurements. We illustrate that the injection of implicit pairs into unpaired sets strengthens the mapping between the two domains and improves the compatibility of their distributions. Furthermore, we show that for this purpose the implicit pairs can be pseudo-pairs, i.e., paired samples which only approximate a real pair. We demonstrate the effect of the approximated implicit samples on image-to-image translation problems, where such pseudo-pairs can be synthesized in one direction, but not in the other. We further show that pseudo-pairs are significantly more effective as implicit pairs in an unpaired setting, than directly using them explicitly in a paired setting. 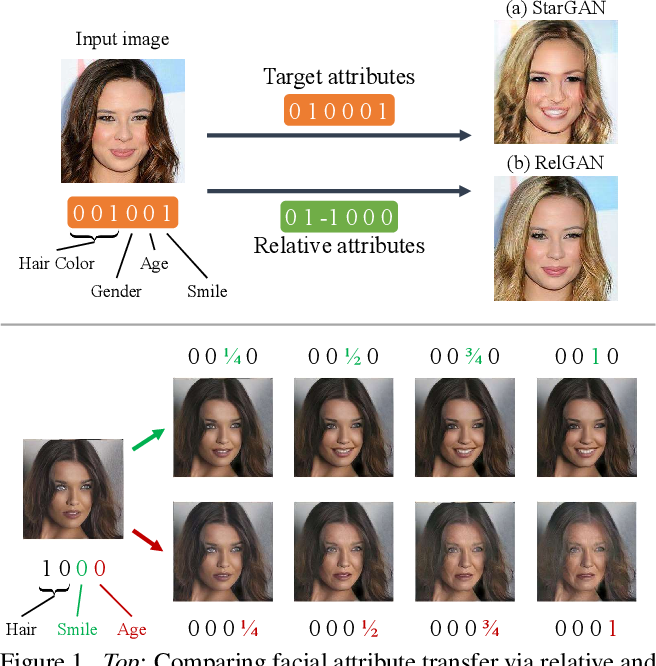 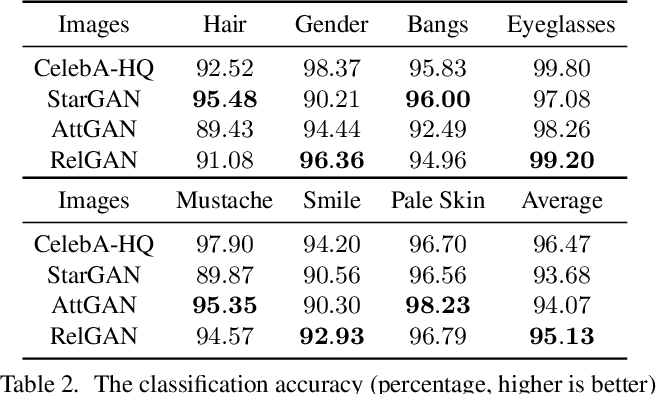 Multi-domain image-to-image translation has gained increasing attention recently. Previous methods take an image and some target attributes as inputs and generate an output image with the desired attributes. However, such methods have two limitations. First, these methods assume binary-valued attributes and thus cannot yield satisfactory results for fine-grained control. Second, these methods require specifying the entire set of target attributes, even if most of the attributes would not be changed. To address these limitations, we propose RelGAN, a new method for multi-domain image-to-image translation. The key idea is to use relative attributes, which describes the desired change on selected attributes. Our method is capable of modifying images by changing particular attributes of interest in a continuous manner while preserving the other attributes. Experimental results demonstrate both the quantitative and qualitative effectiveness of our method on the tasks of facial attribute transfer and interpolation. 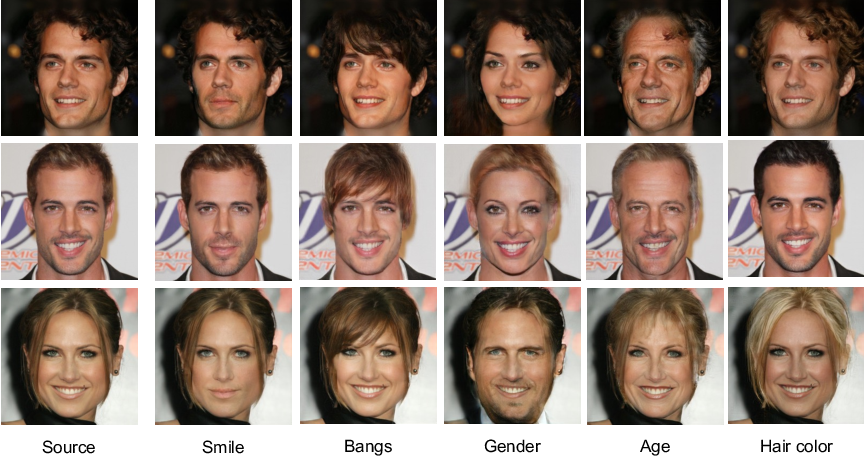 We propose VecGAN, an image-to-image translation framework for facial attribute editing with interpretable latent directions. Facial attribute editing task faces the challenges of precise attribute editing with controllable strength and preservation of the other attributes of an image. For this goal, we design the attribute editing by latent space factorization and for each attribute, we learn a linear direction that is orthogonal to the others. The other component is the controllable strength of the change, a scalar value. In our framework, this scalar can be either sampled or encoded from a reference image by projection. Our work is inspired by the latent space factorization works of fixed pretrained GANs. However, while those models cannot be trained end-to-end and struggle to edit encoded images precisely, VecGAN is end-to-end trained for image translation task and successful at editing an attribute while preserving the others. Our extensive experiments show that VecGAN achieves significant improvements over state-of-the-arts for both local and global edits. 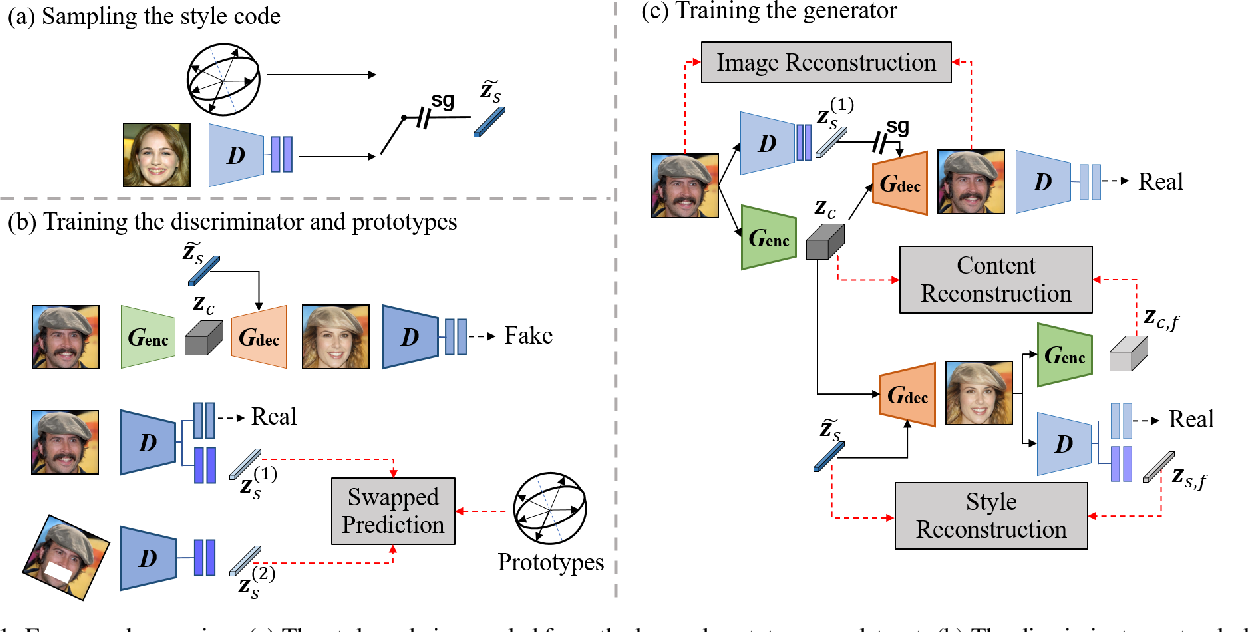 Current image-to-image translations do not control the output domain beyond the classes used during training, nor do they interpolate between different domains well, leading to implausible results. This limitation largely arises because labels do not consider the semantic distance. To mitigate such problems, we propose a style-aware discriminator that acts as a critic as well as a style encoder to provide conditions. The style-aware discriminator learns a controllable style space using prototype-based self-supervised learning and simultaneously guides the generator. Experiments on multiple datasets verify that the proposed model outperforms current state-of-the-art image-to-image translation methods. In contrast with current methods, the proposed approach supports various applications, including style interpolation, content transplantation, and local image translation. 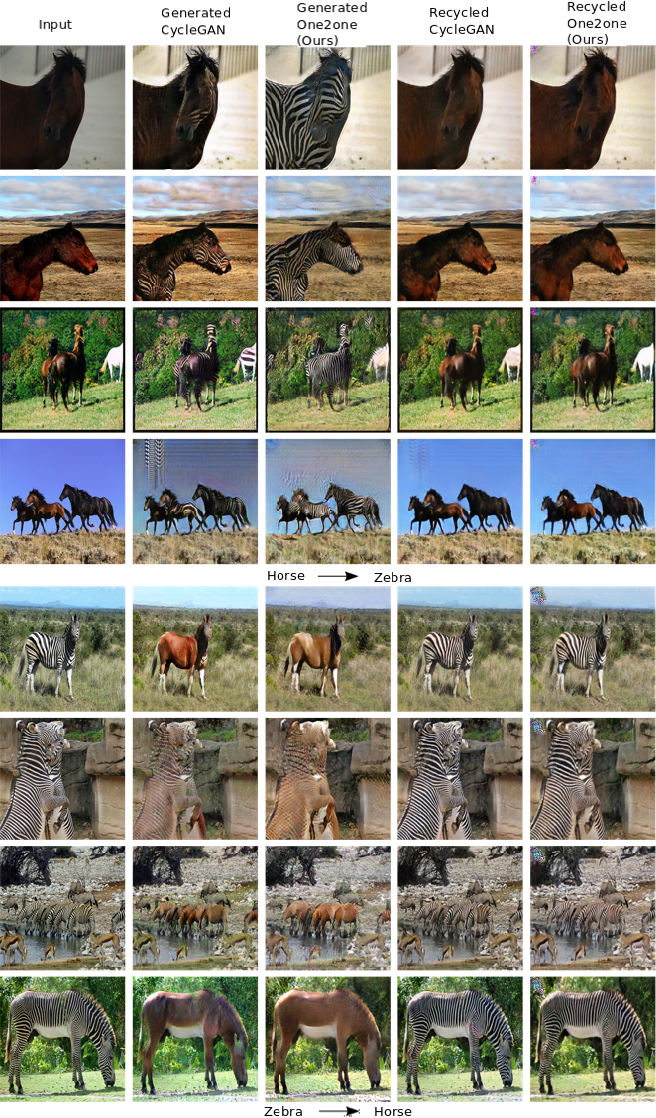 Recently image-to-image translation has attracted significant interests in the literature, starting from the successful use of the generative adversarial network (GAN), to the introduction of cyclic constraint, to extensions to multiple domains. However, in existing approaches, there is no guarantee that the mapping between two image domains is unique or one-to-one. Here we propose a self-inverse network learning approach for unpaired image-to-image translation. Building on top of CycleGAN, we learn a self-inverse function by simply augmenting the training samples by switching inputs and outputs during training. The outcome of such learning is a proven one-to-one mapping function. Our extensive experiments on a variety of detests, including cross-modal medical image synthesis, object transfiguration, and semantic labeling, consistently demonstrate clear improvement over the CycleGAN method both qualitatively and quantitatively. Especially our proposed method reaches the state-of-the-art result on the label to photo direction of the cityscapes benchmark dataset. 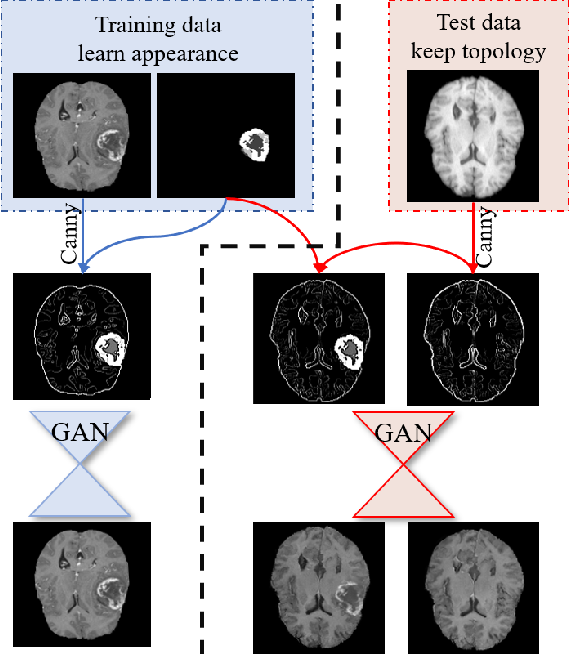 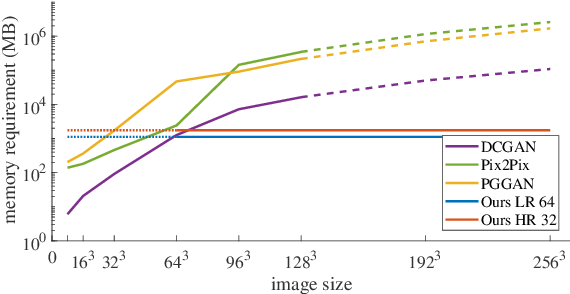 Generative adversarial networks (GANs) are currently rarely applied on 3D medical images of large size, due to their immense computational demand. The present work proposes a multi-scale patch-based GAN approach for establishing unpaired domain translation by generating 3D medical image volumes of high resolution in a memory-efficient way. The key idea to enable memory-efficient image generation is to first generate a low-resolution version of the image followed by the generation of patches of constant sizes but successively growing resolutions. To avoid patch artifacts and incorporate global information, the patch generation is conditioned on patches from previous resolution scales. Those multi-scale GANs are trained to generate realistically looking images from image sketches in order to perform an unpaired domain translation. This allows to preserve the topology of the test data and generate the appearance of the training domain data. The evaluation of the domain translation scenarios is performed on brain MRIs of size 155x240x240 and thorax CTs of size up to 512x512x512. Compared to common patch-based approaches, the multi-resolution scheme enables better image quality and prevents patch artifacts. Also, it ensures constant GPU memory demand independent from the image size, allowing for the generation of arbitrarily large images. 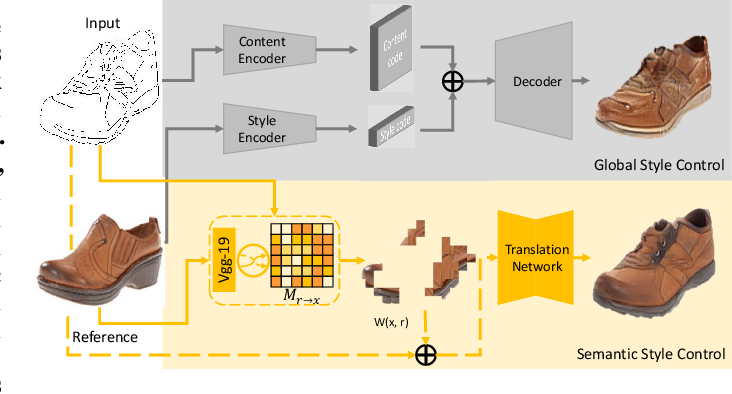