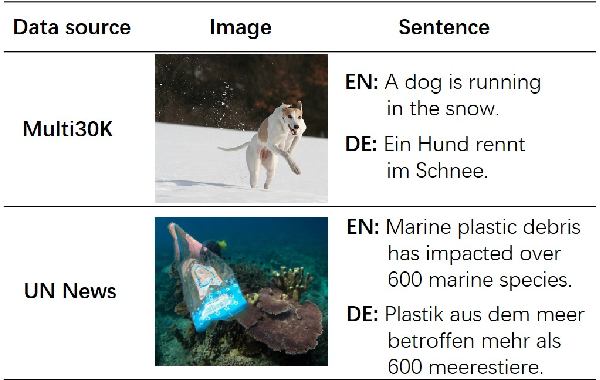 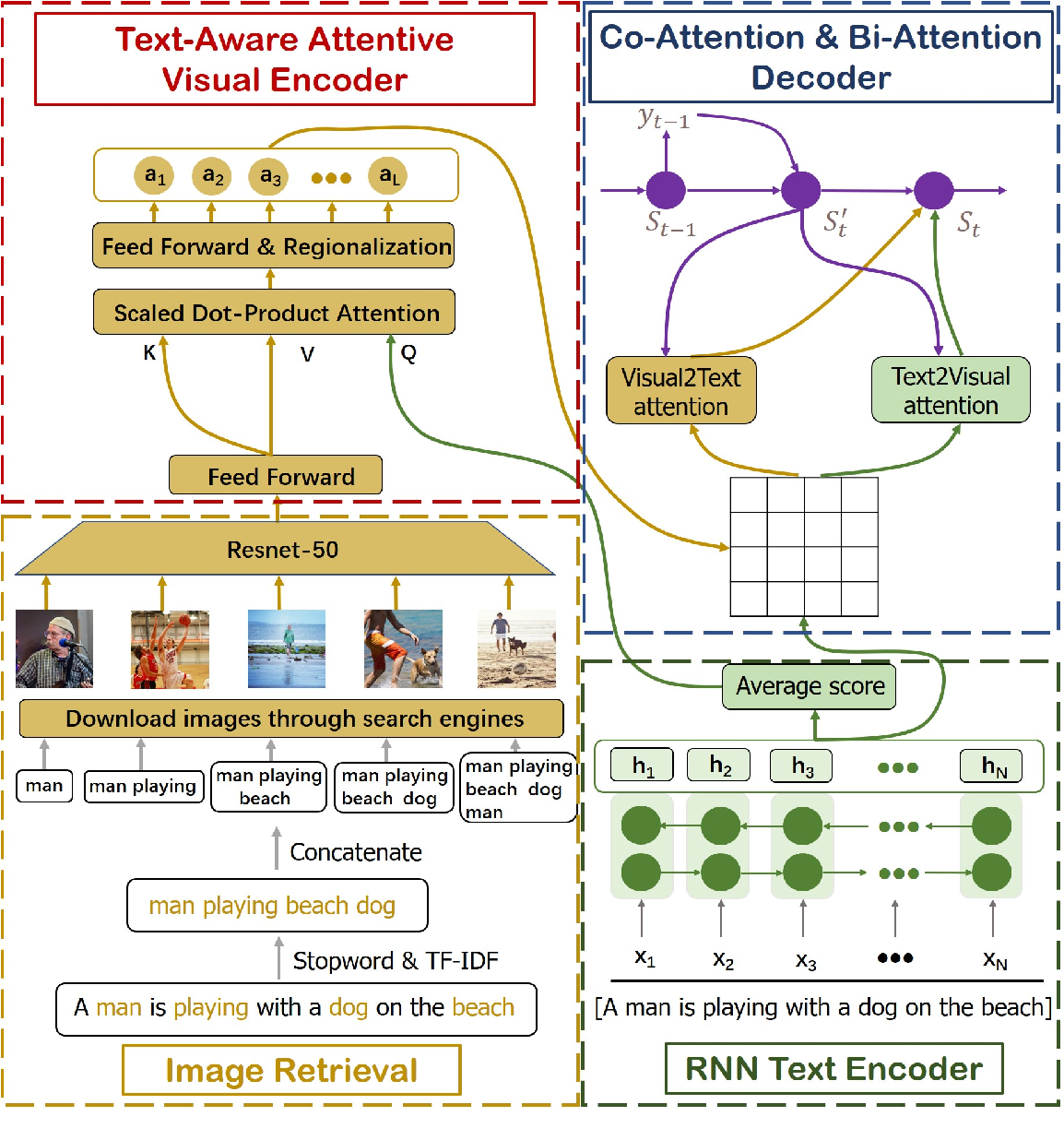 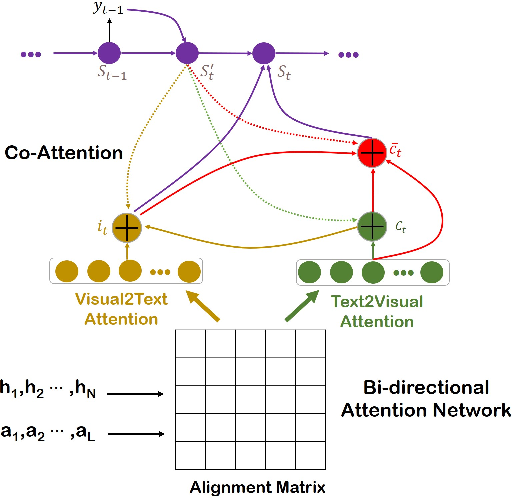 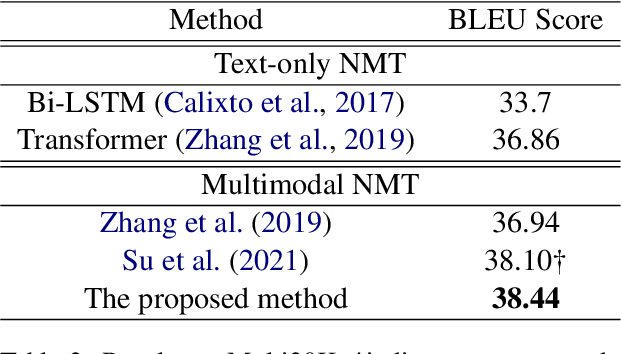 Recently, numbers of works shows that the performance of neural machine translation (NMT) can be improved to a certain extent with using visual information. However, most of these conclusions are drawn from the analysis of experimental results based on a limited set of bilingual sentence-image pairs, such as Multi30K. In these kinds of datasets, the content of one bilingual parallel sentence pair must be well represented by a manually annotated image, which is different with the actual translation situation. Some previous works are proposed to addressed the problem by retrieving images from exiting sentence-image pairs with topic model. However, because of the limited collection of sentence-image pairs they used, their image retrieval method is difficult to deal with the out-of-vocabulary words, and can hardly prove that visual information enhance NMT rather than the co-occurrence of images and sentences. In this paper, we propose an open-vocabulary image retrieval methods to collect descriptive images for bilingual parallel corpus using image search engine. Next, we propose text-aware attentive visual encoder to filter incorrectly collected noise images. Experiment results on Multi30K and other two translation datasets show that our proposed method achieves significant improvements over strong baselines.

A Novel Application of Image-to-Image Translation: Chromosome Straightening Framework by Learning from a Single Image 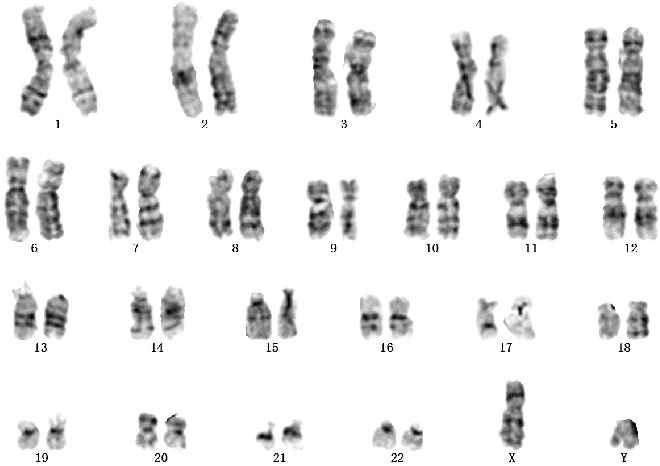 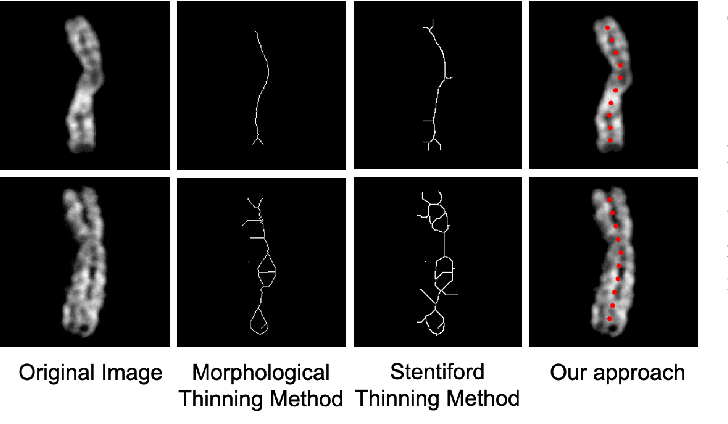 In medical imaging, chromosome straightening plays a significant role in the pathological study of chromosomes and in the development of cytogenetic maps. Whereas different approaches exist for the straightening task, they are mostly geometric algorithms whose outputs are characterized by jagged edges or fragments with discontinued banding patterns. To address the flaws in the geometric algorithms, we propose a novel framework based on image-to-image translation to learn a pertinent mapping dependence for synthesizing straightened chromosomes with uninterrupted banding patterns and preserved details. In addition, to avoid the pitfall of deficient input chromosomes, we construct an augmented dataset using only one single curved chromosome image for training models. Based on this framework, we apply two popular image-to-image translation architectures, U-shape networks and conditional generative adversarial networks, to assess its efficacy. Experiments on a dataset comprising of 642 real-world chromosomes demonstrate the superiority of our framework as compared to the geometric method in straightening performance by rendering realistic and continued chromosome details. Furthermore, our straightened results improve the chromosome classification, achieving 0.98%-1.39% in mean accuracy.

Encoding in Style: a StyleGAN Encoder for Image-to-Image Translation

We present a generic image-to-image translation framework, Pixel2Style2Pixel (pSp). Our pSp framework is based on a novel encoder network that directly generates a series of style vectors which are fed into a pretrained StyleGAN generator, forming the extended W+ latent space. We first show that our encoder can directly embed real images into W+, with no additional optimization. We further introduce a dedicated identity loss which is shown to achieve improved performance in the reconstruction of an input image. We demonstrate pSp to be a simple architecture that, by leveraging a well-trained, fixed generator network, can be easily applied on a wide-range of image-to-image translation tasks. Solving these tasks through the style representation results in a global approach that does not rely on a local pixel-to-pixel correspondence and further supports multi-modal synthesis via the resampling of styles. Notably, we demonstrate that pSp can be trained to align a face image to a frontal pose without any labeled data, generate multi-modal results for ambiguous tasks such as conditional face generation from segmentation maps, and construct high-resolution images from corresponding low-resolution images. 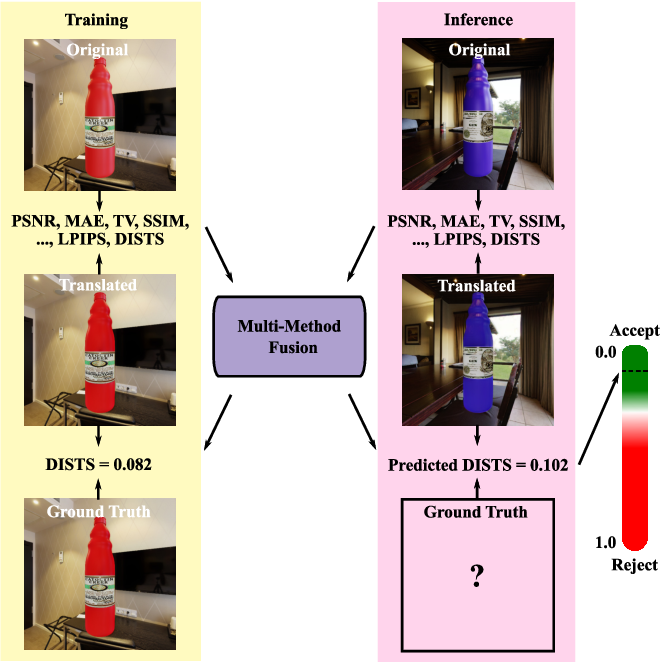 How best to evaluate synthesized images has been a longstanding problem in image-to-image translation, and to date remains largely unresolved. This paper proposes a novel approach that combines signals of image quality between paired source and transformation to predict the latter's similarity with a hypothetical ground truth. We trained a Multi-Method Fusion (MMF) model via an ensemble of gradient-boosted regressors using Image Quality Assessment (IQA) metrics to predict Deep Image Structure and Texture Similarity (DISTS), enabling models to be ranked without the need for ground truth data. Analysis revealed the task to be feature-constrained, introducing a trade-off at inference between metric computation time and prediction accuracy. The MMF model we present offers an efficient way to automate the evaluation of synthesized images, and by extension the image-to-image translation models that generated them. 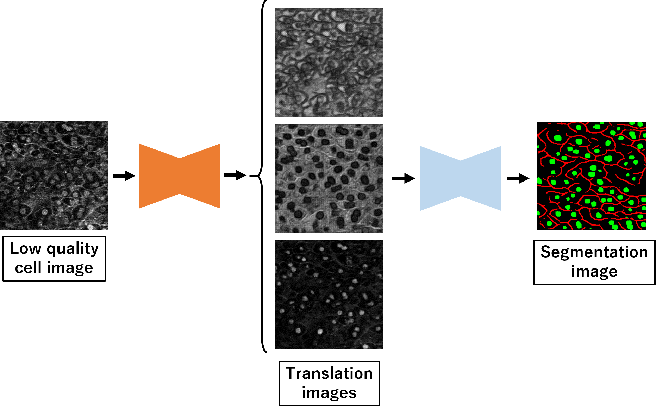 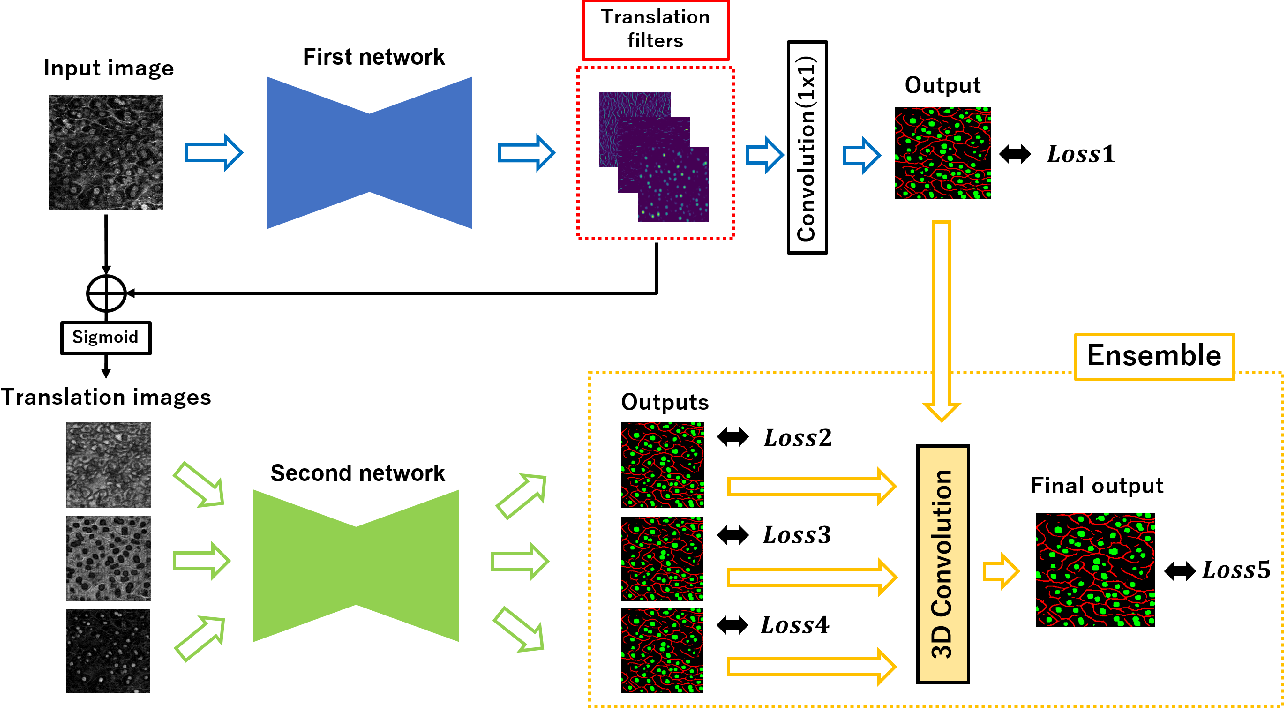 We propose an automatic preprocessing and ensemble learning for segmentation of cell images with low quality. It is difficult to capture cells with strong light. Therefore, the microscopic images of cells tend to have low image quality but these images are not good for semantic segmentation. Here we propose a method to translate an input image to the images that are easy to recognize by deep learning. The proposed method consists of two deep neural networks. The first network is the usual training for semantic segmentation, and penultimate feature maps of the first network are used as filters to translate an input image to the images that emphasize each class. This is the automatic preprocessing and translated cell images are easily classified. The input cell image with low quality is translated by the feature maps in the first network, and the translated images are fed into the second network for semantic segmentation. Since the outputs of the second network are multiple segmentation results, we conduct the weighted ensemble of those segmentation images. Two networks are trained by end-to-end manner, and we do not need to prepare images with high quality for the translation. We confirmed that our proposed method can translate cell images with low quality to the images that are easy to segment, and segmentation accuracy has improved using the weighted ensemble learning.

Unsupervised image-to-image translation is a recently proposed task of translating an image to a different style or domain given only unpaired image examples at training time. In this paper, we formulate a new task of unsupervised video-to-video translation, which poses its own unique challenges. Translating video implies learning not only the appearance of objects and scenes but also realistic motion and transitions between consecutive frames.We investigate the performance of per-frame video-to-video translation using existing image-to-image translation networks, and propose a spatio-temporal 3D translator as an alternative solution to this problem. We evaluate our 3D method on multiple synthetic datasets, such as moving colorized digits, as well as the realistic segmentation-to-video GTA dataset and a new CT-to-MRI volumetric images translation dataset. Our results show that frame-wise translation produces realistic results on a single frame level but underperforms significantly on the scale of the whole video compared to our three-dimensional translation approach, which is better able to learn the complex structure of video and motion and continuity of object appearance. 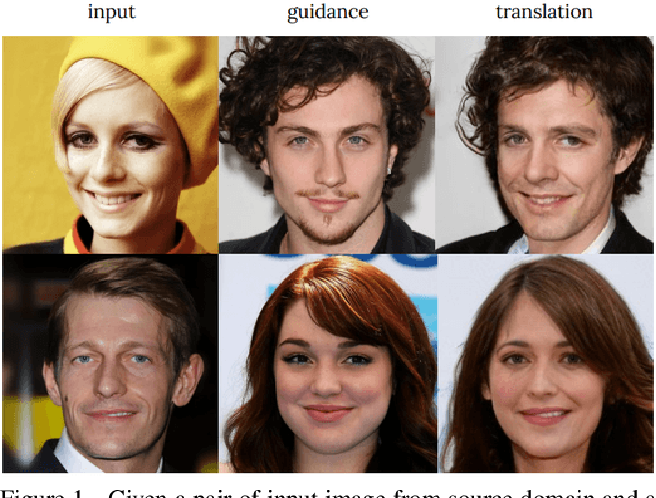 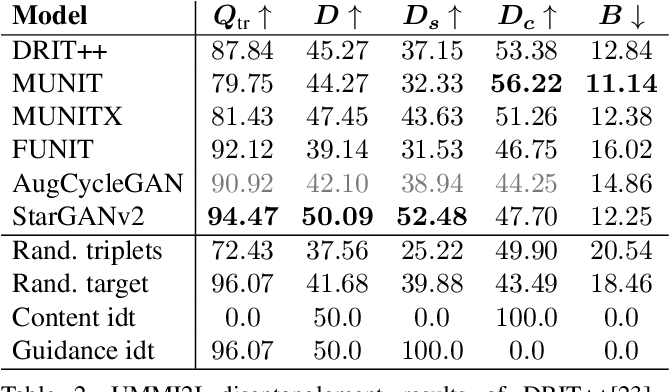 Given an input image from a source domain and a "guidance" image from a target domain, unsupervised many-to-many image-to-image (UMMI2I) translation methods seek to generate a plausible example from the target domain that preserves domain-invariant information of the input source image and inherits the domain-specific information from the guidance image. For example, when translating female faces to male faces, the generated male face should have the same expression, pose and hair color as the input female image, and the same facial hairstyle and other male-specific attributes as the guidance male image. Current state-of-the art UMMI2I methods generate visually pleasing images, but, since for most pairs of real datasets we do not know which attributes are domain-specific and which are domain-invariant, the semantic correctness of existing approaches has not been quantitatively evaluated yet. In this paper, we propose a set of benchmarks and metrics for the evaluation of semantic correctness of UMMI2I methods. We provide an extensive study how well the existing state-of-the-art UMMI2I translation methods preserve domain-invariant and manipulate domain-specific attributes, and discuss the trade-offs shared by all methods, as well as how different architectural choices affect various aspects of semantic correctness. 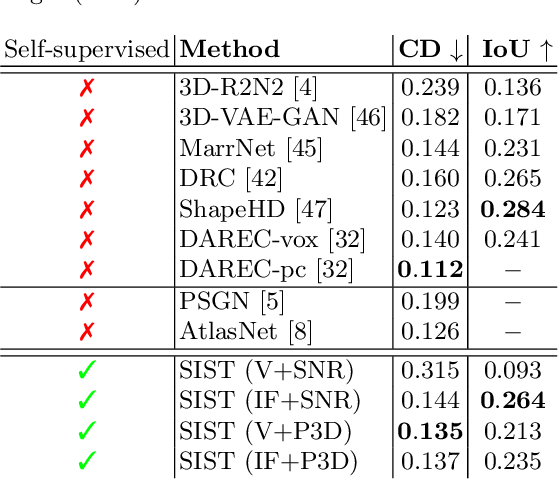 We present a framework to translate between 2D image views and 3D object shapes. Recent progress in deep learning enabled us to learn structure-aware representations from a scene. However, the existing literature assumes that pairs of images and 3D shapes are available for training in full supervision. In this paper, we propose SIST, a Self-supervised Image to Shape Translation framework that fulfills three tasks: (i) reconstructing the 3D shape from a single image; (ii) learning disentangled representations for shape, appearance and viewpoint; and (iii) generating a realistic RGB image from these independent factors. In contrast to the existing approaches, our method does not require image-shape pairs for training. Instead, it uses unpaired image and shape datasets from the same object class and jointly trains image generator and shape reconstruction networks. Our translation method achieves promising results, comparable in quantitative and qualitative terms to the state-of-the-art achieved by fully-supervised methods.

Region and Object based Panoptic Image Synthesis through Conditional GANs

Image-to-image translation is significant to many computer vision and machine learning tasks such as image synthesis and video synthesis. It has primary applications in the graphics editing and animation industries. With the development of generative adversarial networks, a lot of attention has been drawn to image-to-image translation tasks. In this paper, we propose and investigate a novel task named as panoptic-level image-to-image translation and a naive baseline of solving this task. Panoptic-level image translation extends the current image translation task to two separate objectives of semantic style translation (adjust the style of objects to that of different domains) and instance transfiguration (swap between different types of objects). The proposed task generates an image from a complete and detailed panoptic perspective which can enrich the context of real-world vision synthesis. Our contribution consists of the proposal of a significant task worth investigating and a naive baseline of solving it. The proposed baseline consists of the multiple instances sequential translation and semantic-level translation with domain-invariant content code.

Magnetic Resonance (MR) Imaging and Computed Tomography (CT) are the primary diagnostic imaging modalities quite frequently used for surgical planning and analysis. A general problem with medical imaging is that the acquisition process is quite expensive and time-consuming. Deep learning techniques like generative adversarial networks (GANs) can help us to leverage the possibility of an image to image translation between multiple imaging modalities, which in turn helps in saving time and cost. These techniques will help to conduct surgical planning under CT with the feedback of MRI information. While previous studies have shown paired and unpaired image synthesis from MR to CT, image synthesis from CT to MR still remains a challenge, since it involves the addition of extra tissue information. In this manuscript, we have implemented two different variations of Generative Adversarial Networks exploiting the cycling consistency and structural similarity between both CT and MR image modalities on a pelvis dataset, thus facilitating a bidirectional exchange of content and style between these image modalities. The proposed GANs translate the input medical images by different mechanisms, and hence generated images not only appears realistic but also performs well across various comparison metrics, and these images have also been cross verified with a radiologist. The radiologist verification has shown that slight variations in generated MR and CT images may not be exactly the same as their true counterpart but it can be used for medical purposes.