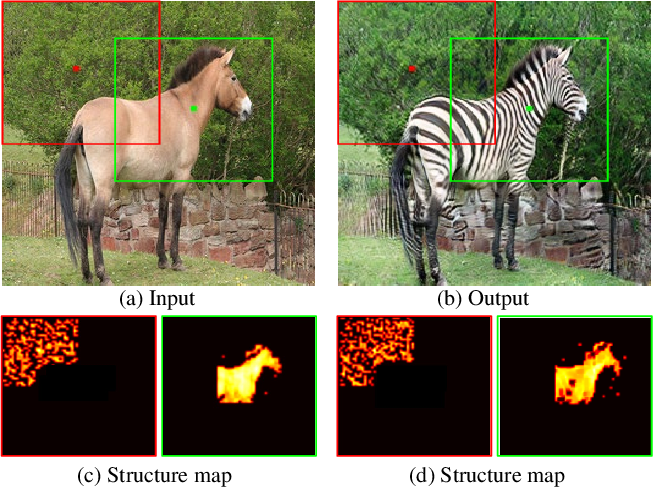 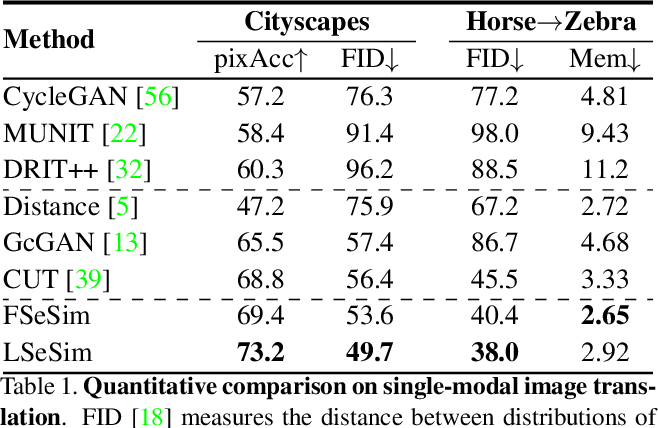 We propose a novel spatially-correlative loss that is simple, efficient and yet effective for preserving scene structure consistency while supporting large appearance changes during unpaired image-to-image (I2I) translation. Previous methods attempt this by using pixel-level cycle-consistency or feature-level matching losses, but the domain-specific nature of these losses hinder translation across large domain gaps. To address this, we exploit the spatial patterns of self-similarity as a means of defining scene structure. Our spatially-correlative loss is geared towards only capturing spatial relationships within an image rather than domain appearance. We also introduce a new self-supervised learning method to explicitly learn spatially-correlative maps for each specific translation task. We show distinct improvement over baseline models in all three modes of unpaired I2I translation: single-modal, multi-modal, and even single-image translation. This new loss can easily be integrated into existing network architectures and thus allows wide applicability. 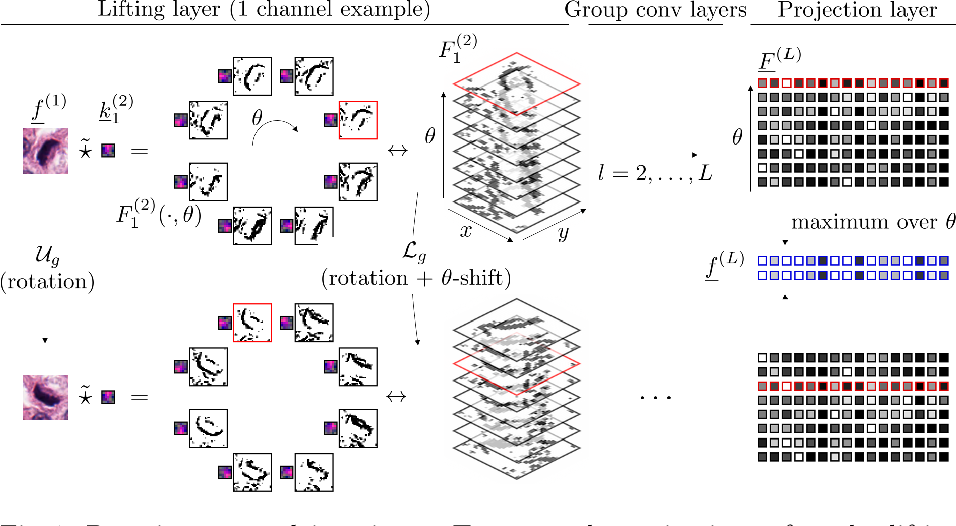 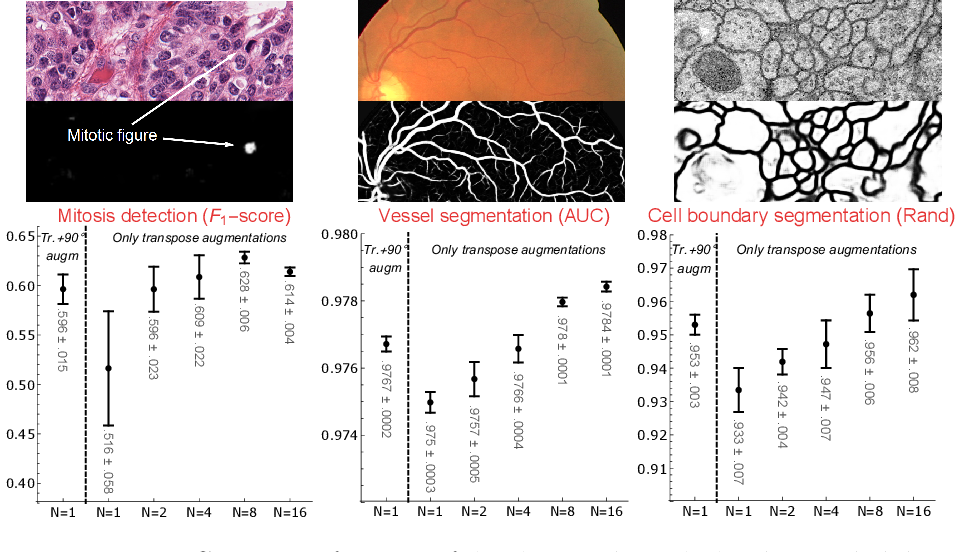 We propose a framework for rotation and translation covariant deep learning using $SE(2)$ group convolutions. The group product of the special Euclidean motion group $SE(2)$ describes how a concatenation of two roto-translations results in a net roto-translation. We encode this geometric structure into convolutional neural networks (CNNs) via $SE(2)$ group convolutional layers, which fit into the standard 2D CNN framework, and which allow to generically deal with rotated input samples without the need for data augmentation. We introduce three layers: a lifting layer which lifts a 2D (vector valued) image to an $SE(2)$-image, i.e., 3D (vector valued) data whose domain is $SE(2)$; a group convolution layer from and to an $SE(2)$-image; and a projection layer from an $SE(2)$-image to a 2D image. The lifting and group convolution layers are $SE(2)$ covariant (the output roto-translates with the input). The final projection layer, a maximum intensity projection over rotations, makes the full CNN rotation invariant. We show with three different problems in histopathology, retinal imaging, and electron microscopy that with the proposed group CNNs, state-of-the-art performance can be achieved, without the need for data augmentation by rotation and with increased performance compared to standard CNNs that do rely on augmentation.

Explicitly disentangling image content from translation and rotation with spatial-VAE 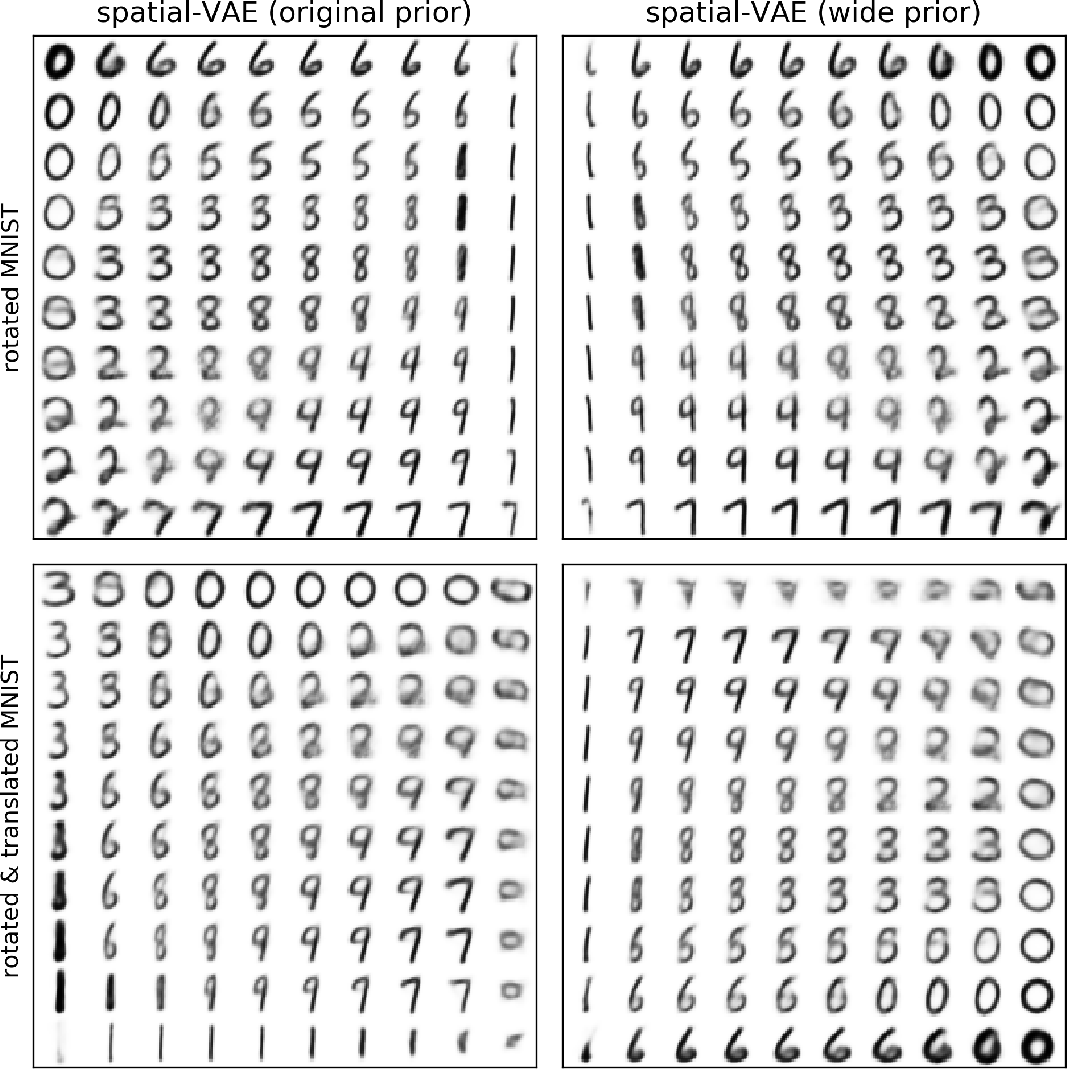 Given an image dataset, we are often interested in finding data generative factors that encode semantic content independently from pose variables such as rotation and translation. However, current disentanglement approaches do not impose any specific structure on the learned latent representations. We propose a method for explicitly disentangling image rotation and translation from other unstructured latent factors in a variational autoencoder (VAE) framework. By formulating the generative model as a function of the spatial coordinate, we make the reconstruction error differentiable with respect to latent translation and rotation parameters. This formulation allows us to train a neural network to perform approximate inference on these latent variables while explicitly constraining them to only represent rotation and translation. We demonstrate that this framework, termed spatial-VAE, effectively learns latent representations that disentangle image rotation and translation from content and improves reconstruction over standard VAEs on several benchmark datasets, including applications to modeling continuous 2-D views of proteins from single particle electron microscopy and galaxies in astronomical images.

Generative adversarial networks has emerged as a defacto standard for image translation problems. To successfully drive such models, one has to rely on additional networks e.g., discriminators and/or perceptual networks. Training these networks with pixel based losses alone are generally not sufficient to learn the target distribution. In this paper, we propose a novel method of computing the loss directly between the source and target images that enable proper distillation of shape/content and colour/style. We show that this is useful in typical image-to-image translations allowing us to successfully drive the generator without relying on additional networks. We demonstrate this on many difficult image translation problems such as image-to-image domain mapping, single image super-resolution and photo realistic makeup transfer. Our extensive evaluation shows the effectiveness of the proposed formulation and its ability to synthesize realistic images. [Code release: https://github.com/ssarfraz/SPL] 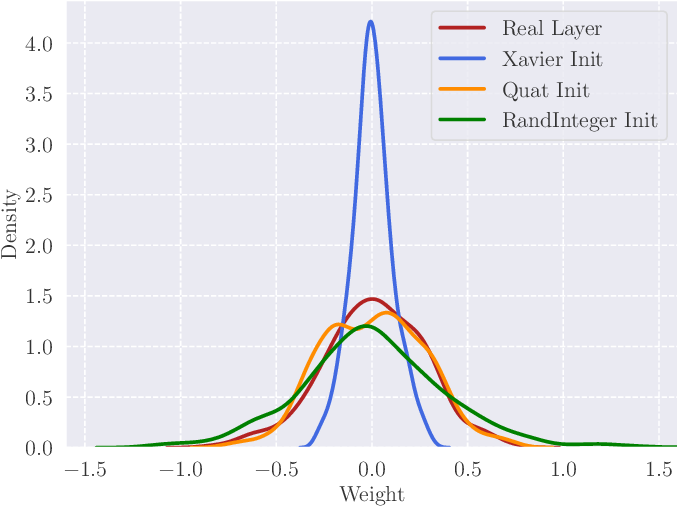 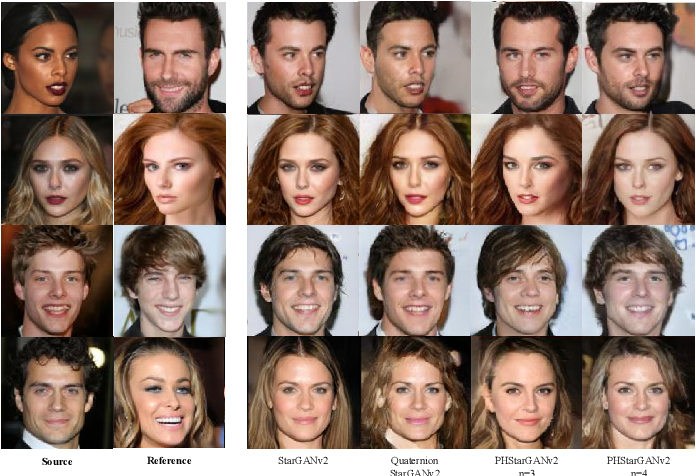 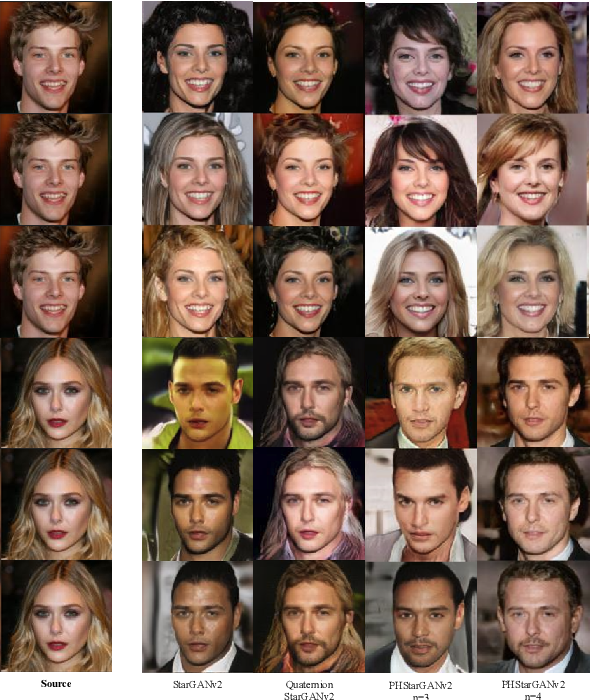 We address the problem of guided image-to-image translation where we translate an input image into another while respecting the constraints provided by an external, user-provided guidance image. Various conditioning methods for leveraging the given guidance image have been explored, including input concatenation , feature concatenation, and conditional affine transformation of feature activations. All these conditioning mechanisms, however, are uni-directional, i.e., no information flow from the input image back to the guidance. To better utilize the constraints of the guidance image, we present a bi-directional feature transformation (bFT) scheme. We show that our bFT scheme outperforms other conditioning schemes and has comparable results to state-of-the-art methods on different tasks. 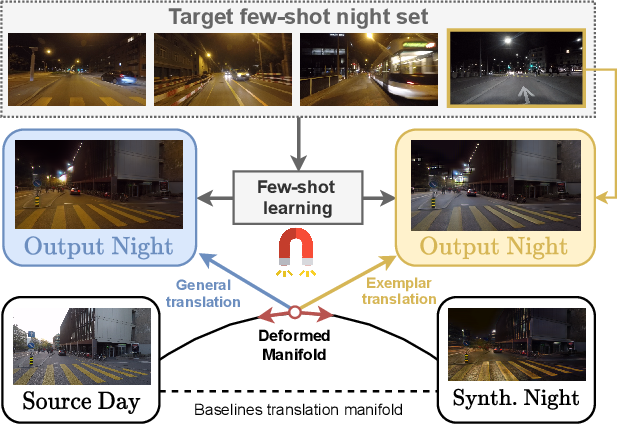 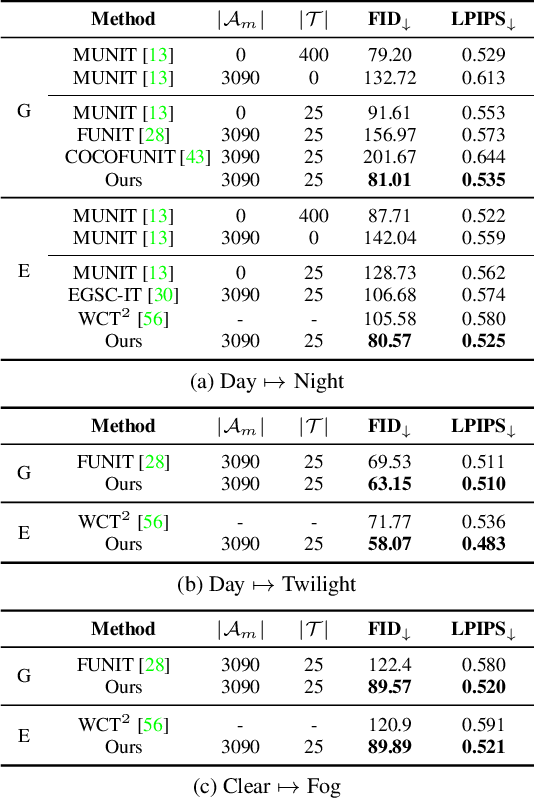 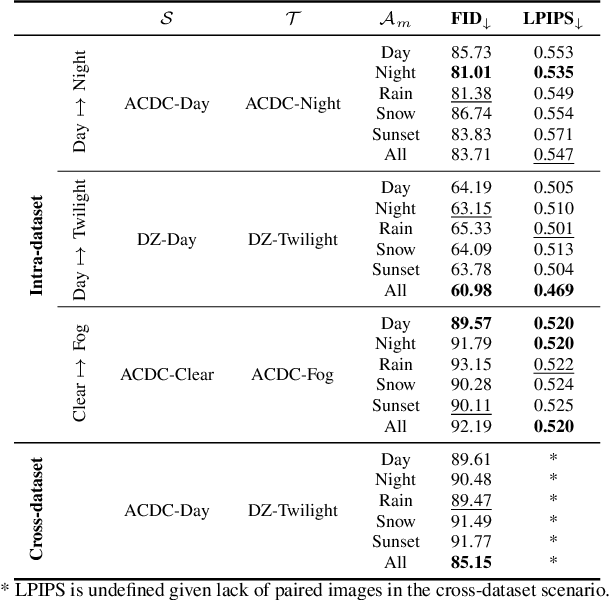 Most image-to-image translation methods require a large number of training images, which restricts their applicability. We instead propose ManiFest: a framework for few-shot image translation that learns a context-aware representation of a target domain from a few images only. To enforce feature consistency, our framework learns a style manifold between source and proxy anchor domains (assumed to be composed of large numbers of images). The learned manifold is interpolated and deformed towards the few-shot target domain via patch-based adversarial and feature statistics alignment losses. All of these components are trained simultaneously during a single end-to-end loop. In addition to the general few-shot translation task, our approach can alternatively be conditioned on a single exemplar image to reproduce its specific style. Extensive experiments demonstrate the efficacy of ManiFest on multiple tasks, outperforming the state-of-the-art on all metrics and in both the general- and exemplar-based scenarios. Our code will be open source. 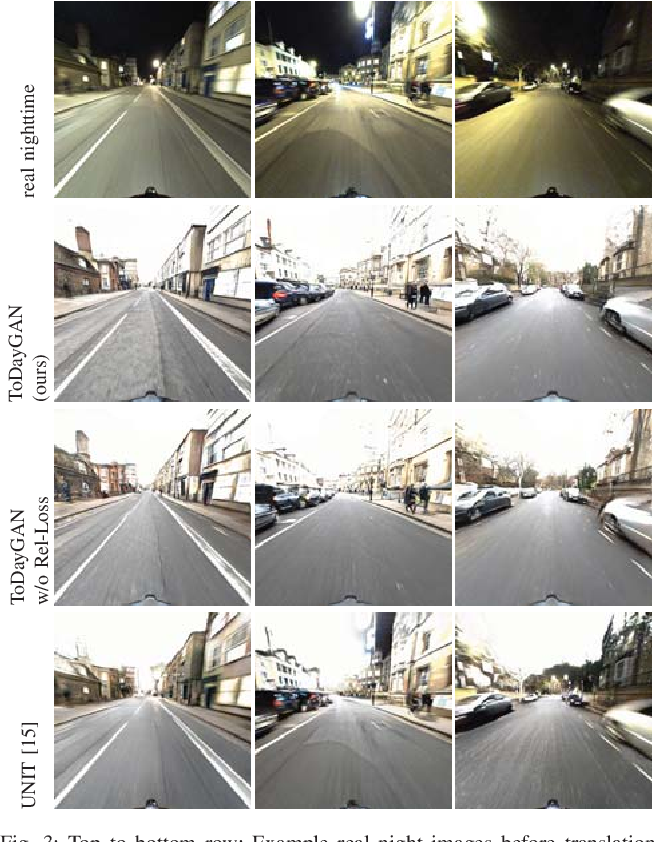 Visual localization is a key step in many robotics pipelines, allowing the robot to approximately determine its position and orientation in the world. An efficient and scalable approach to visual localization is to use image retrieval techniques. These approaches identify the image most similar to a query photo in a database of geo-tagged images and approximate the query's pose via the pose of the retrieved database image. However, image retrieval across drastically different illumination conditions, e.g. day and night, is still a problem with unsatisfactory results, even in this age of powerful neural models. This is due to a lack of a suitably diverse dataset with true correspondences to perform end-to-end learning. A recent class of neural models allows for realistic translation of images among visual domains with relatively little training data and, most importantly, without ground-truth pairings. In this paper, we explore the task of accurately localizing images captured from two traversals of the same area in both day and night. We propose ToDayGAN - a modified image-translation model to alter nighttime driving images to a more-useful daytime representation. We then compare the daytime and translated-night images to obtain a pose estimate for the night image using the known 6-DOF position of the closest day image. Our approach improves localization performance by over 250% compared the current state-of-the-art, in the context of standard metrics in multiple categories. 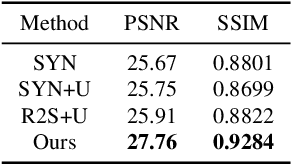 Image dehazing using learning-based methods has achieved state-of-the-art performance in recent years. However, most existing methods train a dehazing model on synthetic hazy images, which are less able to generalize well to real hazy images due to domain shift. To address this issue, we propose a domain adaptation paradigm, which consists of an image translation module and two image dehazing modules. Specifically, we first apply a bidirectional translation network to bridge the gap between the synthetic and real domains by translating images from one domain to another. And then, we use images before and after translation to train the proposed two image dehazing networks with a consistency constraint. In this phase, we incorporate the real hazy image into the dehazing training via exploiting the properties of the clear image (e.g., dark channel prior and image gradient smoothing) to further improve the domain adaptivity. By training image translation and dehazing network in an end-to-end manner, we can obtain better effects of both image translation and dehazing. Experimental results on both synthetic and real-world images demonstrate that our model performs favorably against the state-of-the-art dehazing algorithms.