On the Algorithmic Power of Spiking Neural Networks 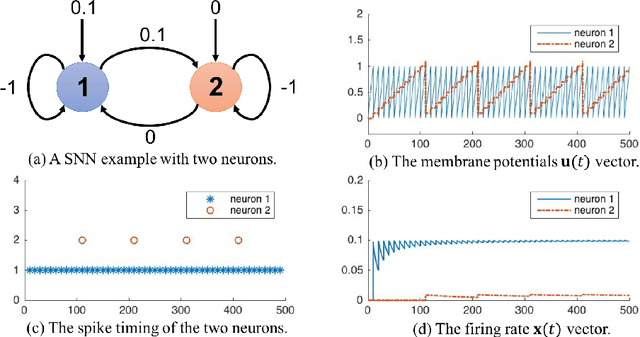 Spiking Neural Networks (SNN) are mathematical models in neuroscience to describe the dynamics among a set of neurons which interact with each other by firing spike signals to each other. Interestingly, recent works observed that for an integrate-and-fire model, when configured appropriately (e.g., after the parameters are learned properly), the neurons' firing rate, i.e., converges to an optimal solution of Lasso and certain quadratic optimization problems. Thus, SNN can be viewed as a natural algorithm for solving such convex optimization problems. However, theoretical understanding of SNN algorithms remains limited. In particular, only the convergence result for the Lasso problem is known, but the bounds of the convergence rate remain unknown. Therefore, we do not know any explicit complexity bounds for SNN algorithms. In this work, we investigate the algorithmic power of the integrate-and-fire SNN model after the parameters are properly learned/configured. In particular, we explore what algorithms SNN can implement. We start by formulating a clean discrete-time SNN model to facilitate the algorithmic study. We consider two SNN dynamics and obtain the following results. * We first consider an arguably simplest SNN dynamics with a threshold spiking rule, which we call simple SNN. We show that simple SNN solves the least square problem for a matrix $A\in\mathbb{R}^{m\times n}$ and vector $\mathbf{b} \in \mathbb{R}^m$ with timestep complexity $O(\kappa n/\epsilon)$. * For the under-determined case, we observe that simple SNN may solve the $\ell_1$ minimization problem using an interesting primal-dual algorithm, which solves the dual problem by a gradient-based algorithm while updates the primal solution along the way. We analyze a variant dynamics and use simulation to serve as partial evidence to support the conjecture.